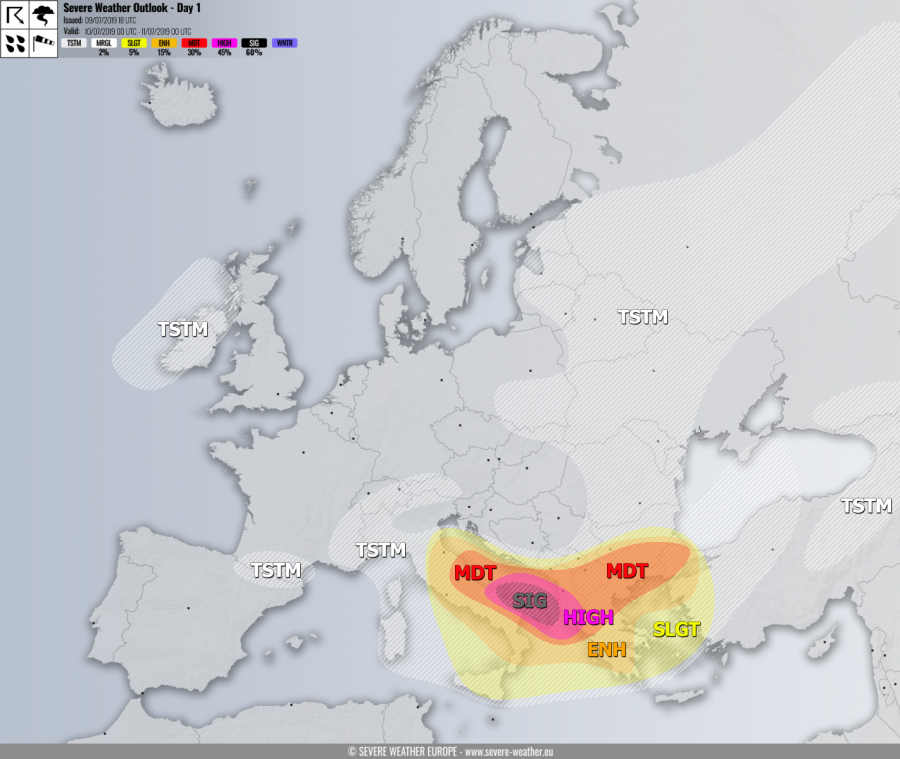 A large trough over ENE Europe will push a sharp short-wave trough across the Balkan peninsula and Italy, providing a large-scale ascent within strong jet stream across the region. Upper low over Iberia moves towards SW. Ridging persists over W Europe while it strengthens over N Europe. 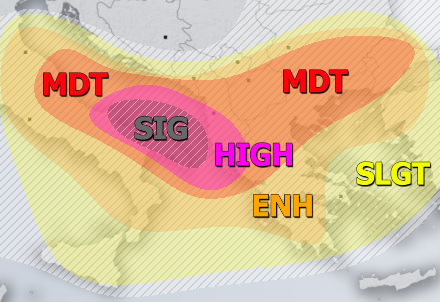 HIGH risk has been issued for SE Italy (Molise and Puglia regions) across the S Adriatic into S Albania and extreme NW Greece with threat for severe storms, capable of producing extremely severe damaging winds, torrential / excessive rainfall, very large to giant hail and tornadoes. A very robust setup is shaping up this afternoon and tonight as extreme instability (3000 to locally near 4000+ J/kg of SBCAPE) with very strong (50-70 knots) deep layer shear will perfectly overlap together and support discrete long-lived supercells with severe to extremely severe damaging winds and very large hail threat. Strongly enhanced SR helicity along the SE Italian coast will also support tornadoes! Storms will gradually cluster into one or two MCS/MCCs while moves across the risk area towards S Balkans through the evening hours and continue towards E Greece and W Turkey overnight.

SIG risk (hatched area) has been placed across parts of SE Italy (Puglia region) into the S Adriatic sea where conditions are extremely favorable for the development of intense (possibly also tornadic) supercells in a narrow corridor along the southeastwards advancing front or cluster of storms. An impressive strong east-southeasterly inflow layer maintaining high mid-20s dewpoints along the coast of Puglia region results in strongly enhanced 20-25 knots low-level shear and 300-500 m^2/s^2 of storm-relative helicity. Overlapped with extreme instability, MLCAPE of 2500-3500 J/kg and SBCAPE in excess of 4000 J/kg, any storm will rapidly organize into an intense supercell and would have the potential to quickly become tornadic. These values will support long-lived supercells and could develop a significant tornado or two as well, along with destructive large to giant hail. Additionally, supercells with potential for bowing segments or a bow echo along the leading line of possible MCS forcing will introduce an extremely severe wind threat, with gusts possibly exceeding 120 km/h, together with wind-driven hail!

MDT / ENH / SLGT risks have been issued for areas surrounding the HIGH risk including south-central Italy across the Adriatic sea into S Balkans where severe to extremely severe weather is likely, but less coverage is expected. Very large hail and severe damaging winds are expected locally. SLGT risk was also extended across Sicily and Aegean sea into W Turkey for possible isolated severe storms.