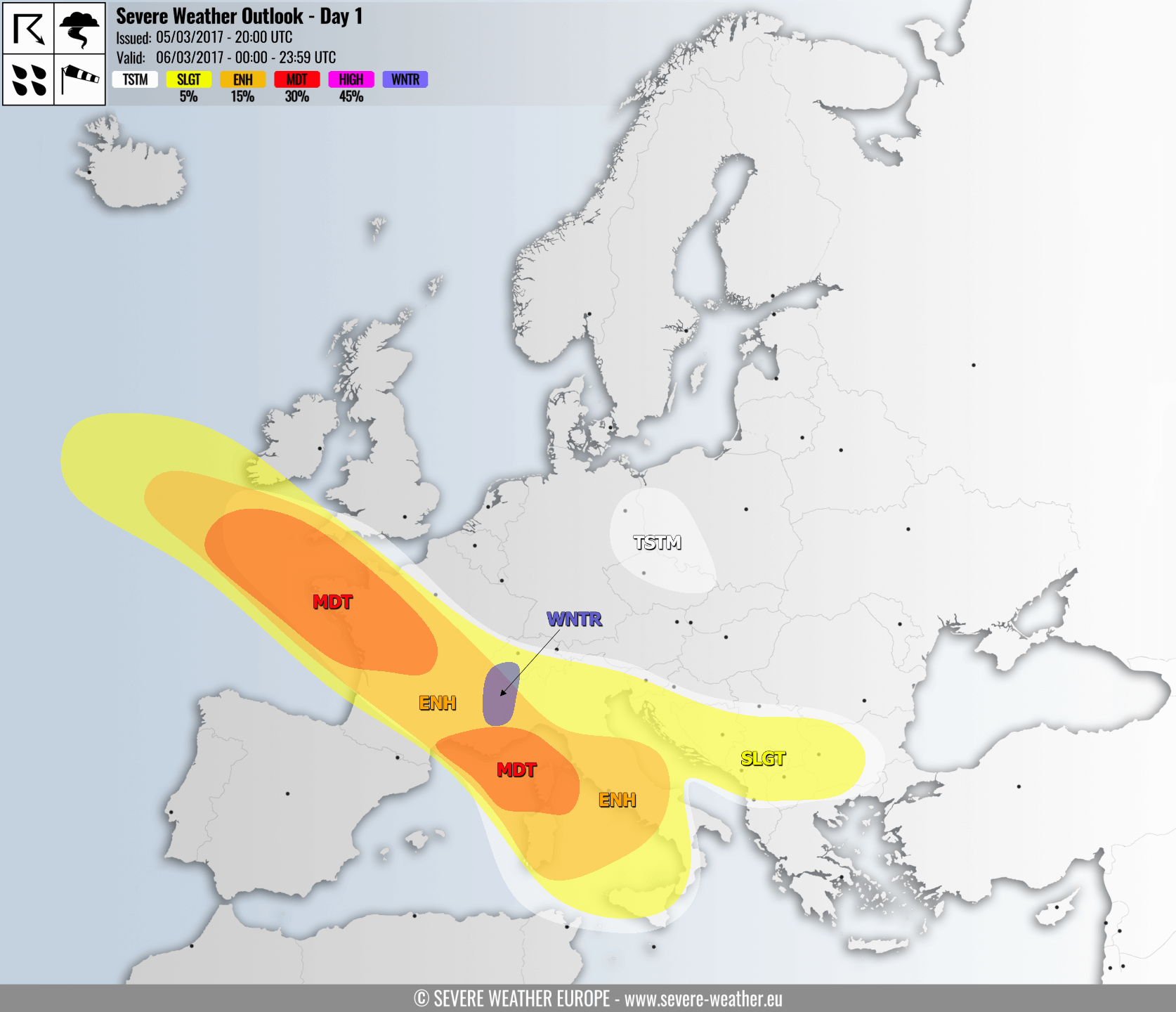 A large trough/low affecting much of Europe while ridge has established over Scandinavia and W of Iberia. A secondary low travels from S UK across France into N Mediterranean and considerably deepens in the evening hours. It results in severe storms along its main cold front across Italy while a powerful windstorm develops in its wake.

A MDT risk has been issued for WNW France and areas towards the SW of England with threat for extremely severe winds associated with a potent windstorm crossing the areas from the NW towards the SE. This event will unfold in the morning hours once the cyclone over S UK deepens and establishes a strong wind field, peak wind gusts are expected to reach 120-140 km/h, locally they could approach 150 km/h (Brittany, NW France). The cyclone and windstorm moves further SE towards the midday.

ENH/SLGT risks have been issued for the areas surrounding the MDT risk area across WNW France, SW England and S Ireland where severe to extremely severe winds are expected, locally gusting in excess of 120 km/h.

A MDT risk has been issued for extreme S France, N Mediterranean (parts of Ligurian sea) and Corsica where severe to extremely severe winds are expected, locally exceeding 130 km/h during the afternoon and evening hours. A surface cyclone will rapidly enter N Mediterranean from the NW and deepen, resulting in powerful windstorm. It will continue S-SE across central Italy and Tyrrhenian sea overnight.

An ENH risk has been issued for S France, NW and central Italy, central Adriatic sea and towards the Tyrrhenian sea and Sardinia island with threat for severe storms bringing severe winds, large hail, torrential rainfall and some tornado threat. After the convective storms, a potent windstorm with severe to extremely severe winds will overspread the ENH/MDT risk areas and continue into the evening hours.

A SLGT risk has been issued for most of Italy, SW Slovenia and Croatia and towards the SSW Balkan countries with threat for isolated storms with large hail, severe winds and heavy rainfall.

A TSTM risk has been placed across E Germany, N Czech Republic in W Poland where some isolated storms are possible in the afternoon.

A WNTR risk has been isssued for NW Alps with threat for excessive snowfall in the mountains, 50-75 cm of fresh snow is likely.

Follow the severe weather in risk areas with radar: