Coming up this week, a spectacular celestial fireworks display of Perseid meteor shower peaks. The highest activity is expected on August 12th and 13th, with more than 100 meteors per hour. The Perseids 2021 will give us one of the greatest displays in years as they finally coincide with no Moon to disturb the observations during the nights around the peak.

No matter where you live on Earth, there are two great meteor shower events happening every year – the Perseid meteor shower in August and December’s Geminids. Both meteor showers bring a spectacular celestial show, producing hundreds of meteors in the dark nights around the peak.

A composite of Perseid over Rijeka, Croatia during the peak in 2019. Photo: Marko Korošec

And the activity is now expected to significantly ramp up, with an increasing number of meteors each of the following nights as we are near the peak of the Perseid meteor shower on Thursday night, Aug 12th, 2021. Finally no Moon out to disturb the observations. The Moon will go down in the early evening, so the whole night will be just a dark sky.

Many skywatchers across Europe, United States, Canada and Asia will be able to see the show, thanks to a very good chances for skies to be clear on Thursday night.

Interested in observing this spectacular celestial show? See further down to find out the weather conditions across Europe, Asia, the United States, and Canada with the forecast for cloud coverage during the peak night on Thursday this week. It looks like we will have quite a show!

Now, let’s first give you all the answers you might be questioning about the ongoing Perseid meteor shower.

The Perseid meteor shower is, besides the Geminids in December, known as the most reliable night sky event every year, with a zenithal hourly rate (ZHR)* of more than 100 meteors quite warranted.

The ZHR – Zenithal Hourly Rate of a meteor shower tells us the number of meteors a single observer would see in an hour of peak activity if it was at the zenith. This is assumed that the conditions are excellent (this means that stars are visible up to about magnitude 6.5).

The Perseid shower meteors are made of small dust particles, crumbs of comet 109P/Swift-Tuttle. They are burning up as they hit our atmosphere at about 59 km/s. Perseid meteors are known as one of the most regular and reliable meteor showers every year, peaking in mid-August. So reliable that they used to be known as Tears of Saint Lawrence for decades. 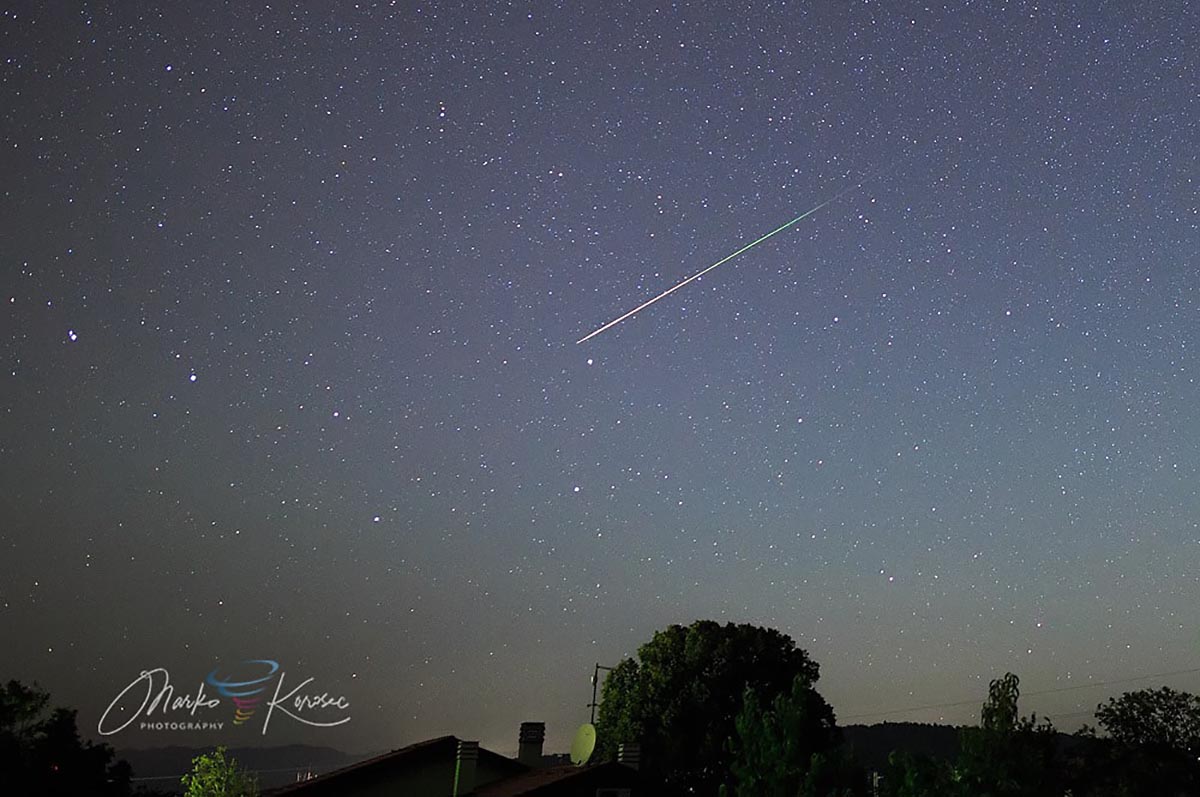 The Perseids often produce a superb meteor shower, active from around mid-July to late August. They bring some of the best activity of any annual meteor shower during their peak on August 12/13th when we can enjoy a celestial show of hundreds of meteors raining from the sky.

The Perseid meteor shower also brings bright and colorful meteors, including fireballs. The celestial show happens high in the atmosphere, right at the edge of space. While Perseids may seem to be close, they are about 100 km away. Those we see close to the horizon are 500 km away, or even more.

An average bright Perseid meteor is produced by a dust particle (called a meteoroid) that is only several millimeters across. The brightest Perseids often leave persistent dust trails, that are slowly twisted and contorted, depending on the upper-level winds. 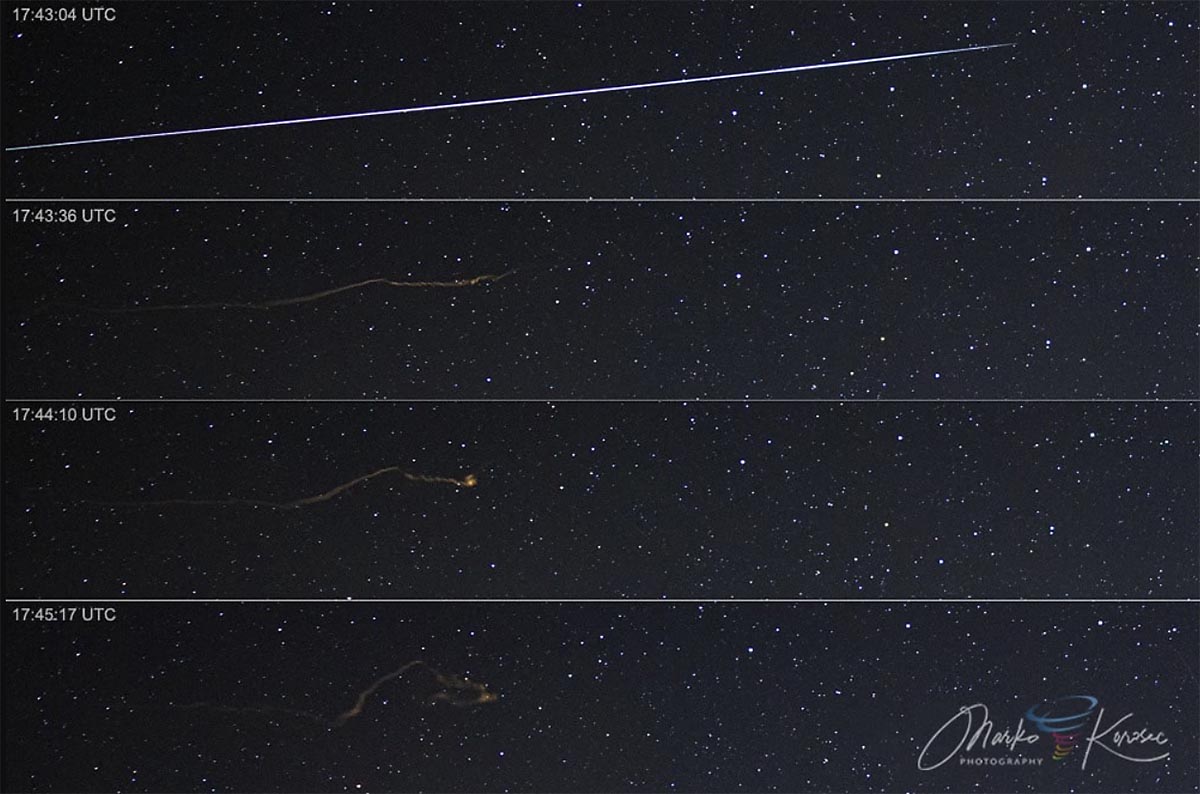 These dust trails can last several tens of seconds if you then observe them with the naked eye, minutes if you use binoculars. Above is an example of a persistent dust trail during a Taurid meteor shower.

So, how can we spot the part of the sky where the Perseid meteors are coming out in the sky? It is pretty simple.

Remember, that all meteors will look like they come from one certain point or small area in the sky. If you would trace all the Perseid meteor tracks backward, they all seem to come from the constellation Perseus, near the famous Double Cluster. 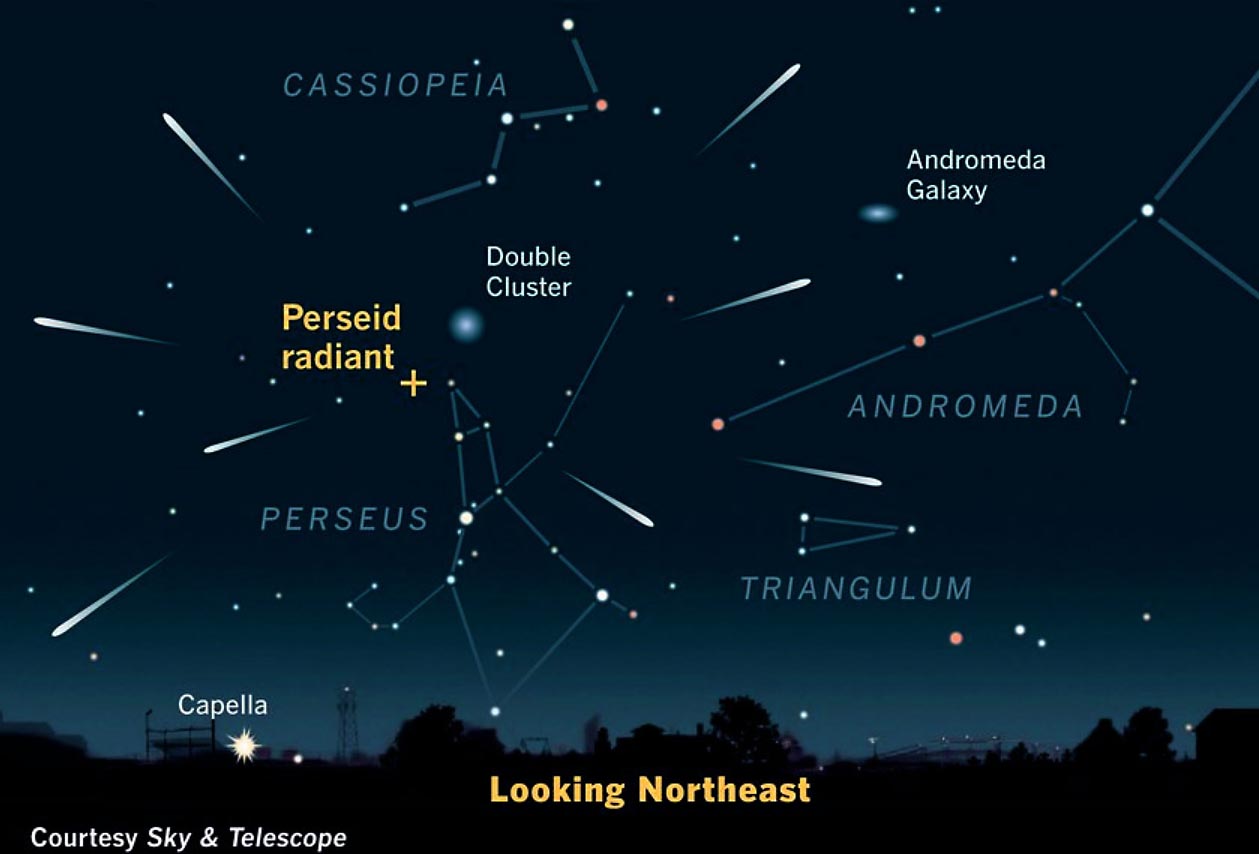 Hence, that is how the Perseid meteor shower got its name in honor of the constellation Perseus the Hero. That point where all the meteors are coming out from the sky is called the radiant. The higher the radiant is in the sky, the more meteors appear.

The radiant of Perseid meteors is visible all night, it first appears above the northeastern horizon in the evening and rises the highest during the second half of the night. The higher the radiant is, the more meteors are visible. 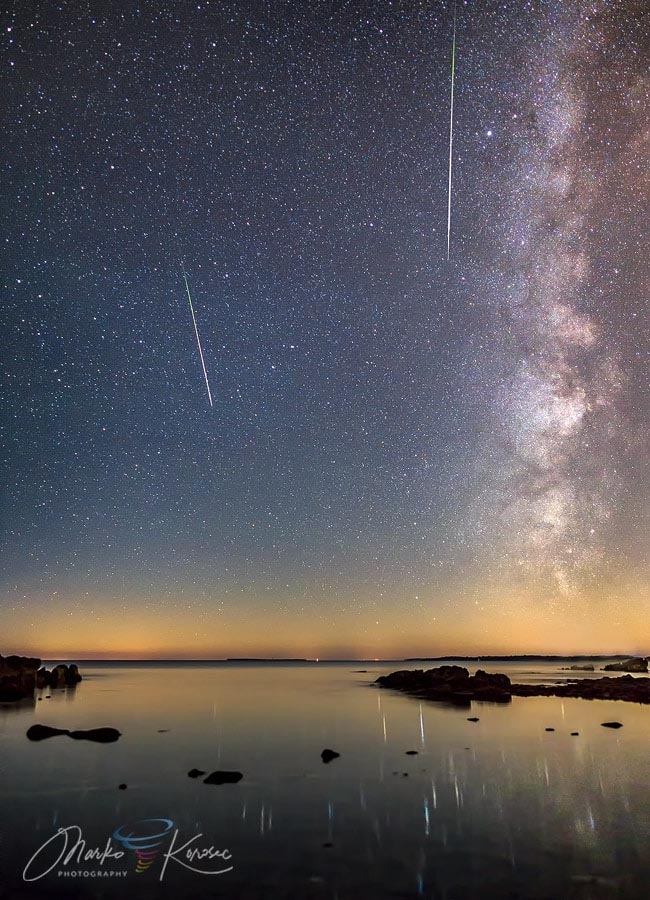 A pair or Perseids and Milky Way. Photo: Marko Korošec

The best way to observe (or photograph) the Perseid meteor shower is to find the location with the clearest skies possible, away from the city lights and clouds.If you have that option, find some higher observing locations in the hills or mountains. The sky will be clearer and darker there, which gives you the chance to see the highest number of meteors.

The best opportunities to see some spectacular meteors typically occur on the peak night, possibly also one night before and after the peak. After last year’s Moon shining and celestial show debacle, most of the meteors were not visible, but this year is finally expected to be much different.

During the peak of the Perseid meteor shower 2021, skywatchers and observers across the United States, Canada, Europe, and Asia will be lucky, as no Moon will disturb our observations. Finally! After several consecutive years, the peak activity during the August 12/13th night happens without the bright Moon in the sky. 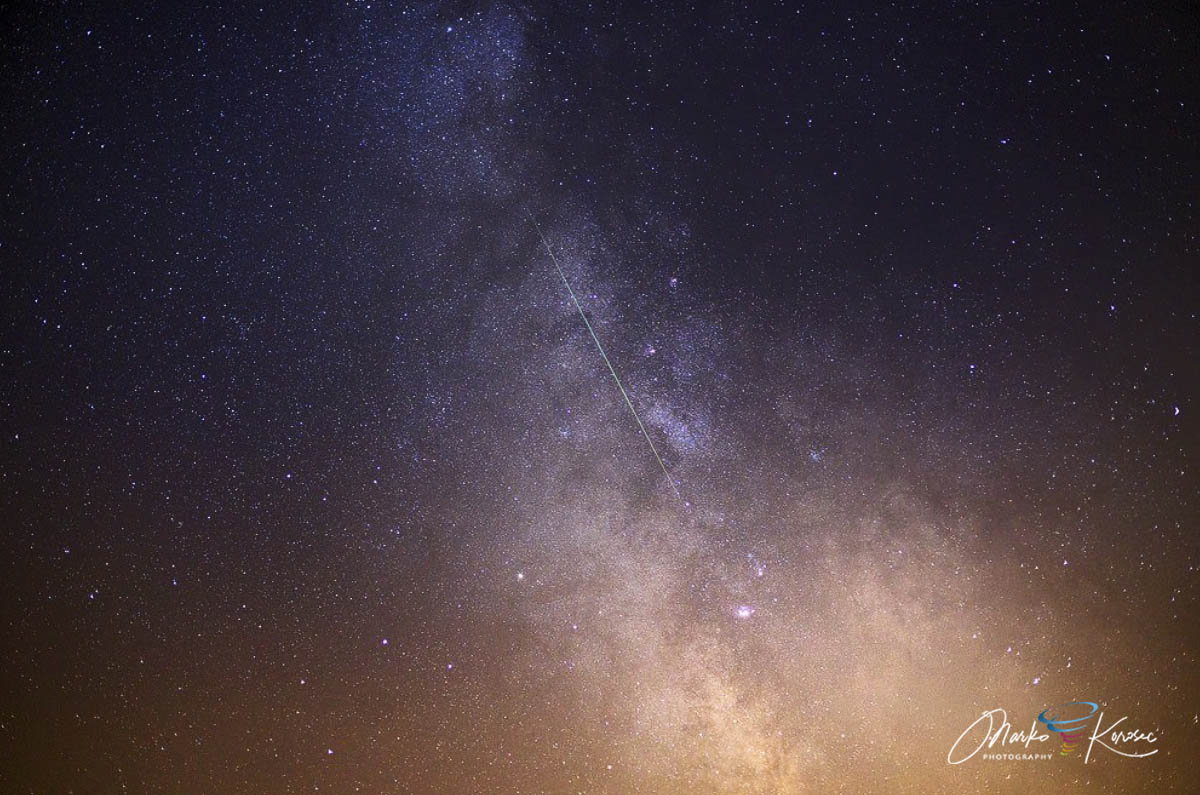 The New Moon goes down in the evening hours, giving us a perfectly dark sky throughout the whole night. Similar nights are expected in the days around the peak, so don’t miss the opportunity to warm-up tonight, tomorrow night, and also observe the show immediately after the peak, during the nights this weekend.

So once we finally come to the peak nights, August 11th, 12th, and 13th, there will be ideal conditions present for observing the Perseid meteor shower celestial show. The Moon rises in the morning and sets in the evening, giving us a number of hours to enjoy this spectacular celestial show. 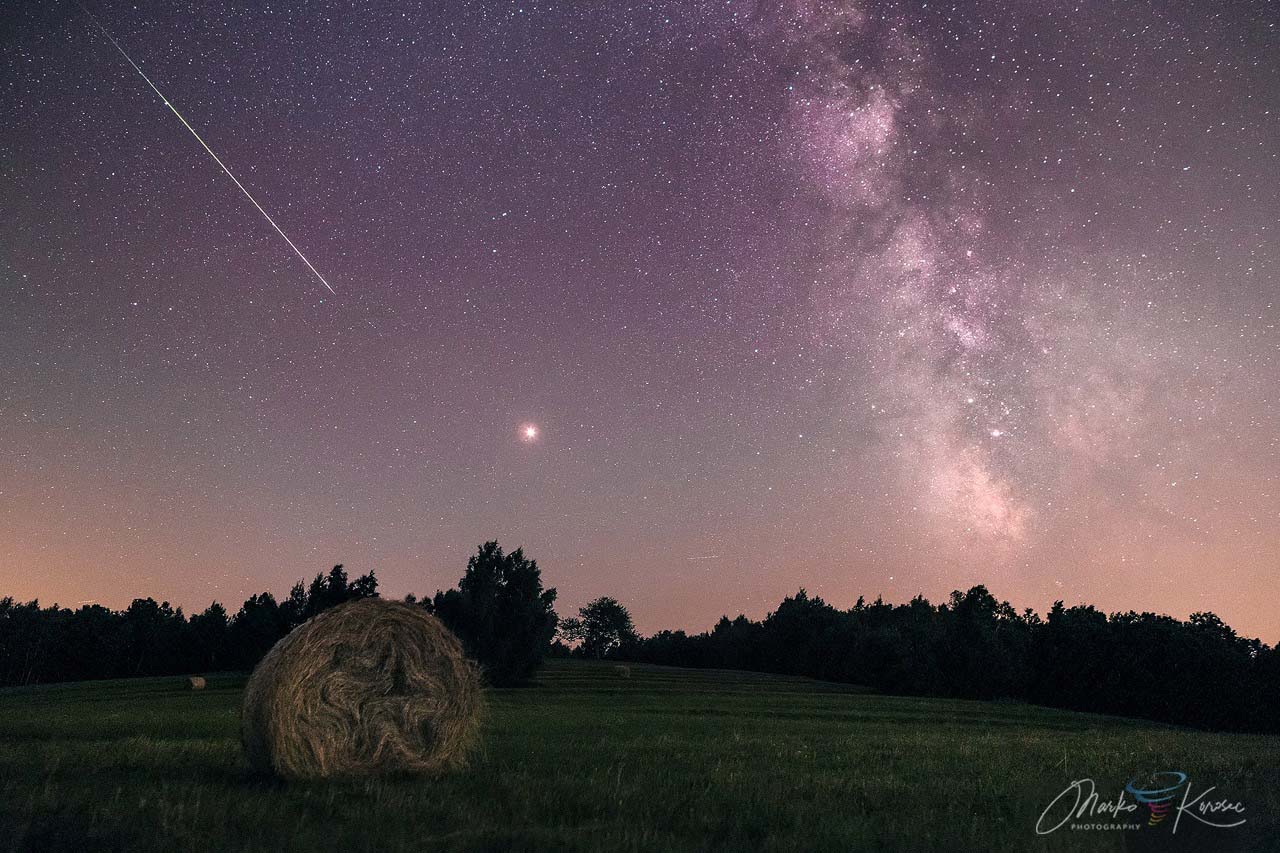 The main show of the Perseid meteor shower peaks from August 12th, 14 UTC to August 13th, 03 UTC. Almost as perfect as it gets for both the European, Asian and North American continents.

And what we can also see from the weather forecast trends, skies will also be pretty clear for many.

CLOUD FORECAST FOR THE PERSEIDS 2021: A SPECTACULAR DISPLAY IN SIGHT

With the Perseid meteor shower being one of those celestial events you don’t want to miss it, it is always a huge challenge to find the proper weather conditions. As the summer months are often disturbed by daytime thunderstorm activity, the remaining clouds also extend into the nighttime hours.

But let’s see the latest weather charts regarding the cloud coverage across the United States, Canada, Europe, and Asia during the peak this Thursday, August 12th.

Cloud forecast for Canada and the United States

The observational conditions through the peak night this Thursday will be quite good for many observers across the United States and Canada. According to the weather models, clear skies are likely across large portions of the West, north, and northwest United States.

Also across parts of the Southeast U.S. and the Midwest. While father north across Canada, the best conditions seem to be in place across the western half of the country.

Cloudiness will mainly expand along the Pacific West Coast, the northeast United States, and the majority of the Great Lakes. Then across the central parts of the country into New Mexico and Texas. Including Mexico and most of the Gulf. Some chances for clearing skies exist over northern Florida.

The eastern parts of Canada are likely to see quite some clouds which will limit the Perseid meteor shower observations.

Cloud forecast for Europe and Asia

A large part of the European continent will be able to enjoy the spectacular celestial show, especially across the south and eastern parts. The best conditions with completely clear skies are expected across the Mediterranean and a large part of the Balkan peninsula, under the strong heatwave.

Clouds will, unfortunately, disturb observations across western Europe, although some parts could find themselves in clear skies. It is definitely worth a try and goes out if you are lucky at your place.

A lot of clear skies are also likely across the Iberian peninsula, eastern Europe, Middle East, and northern Africa. Some parts of Scandinavia could also see some clear skies for at least a few hours through Thursday night.

Also skywatchers farther east, over Asia, will have some pretty good conditions during the peak of the Perseids this year. Parts of western and eastern Russia, Mongolia, and northern China should find themselves in clear skies on Thursday night.

Also, the area from Turkmenistan to Iran, Afganistan, and Pakistan, as clear skies in very dry air mass are forecast there. While thick cloudiness will limit the observations in central Russia, as well as the rest of China, Japan, and Taiwan. 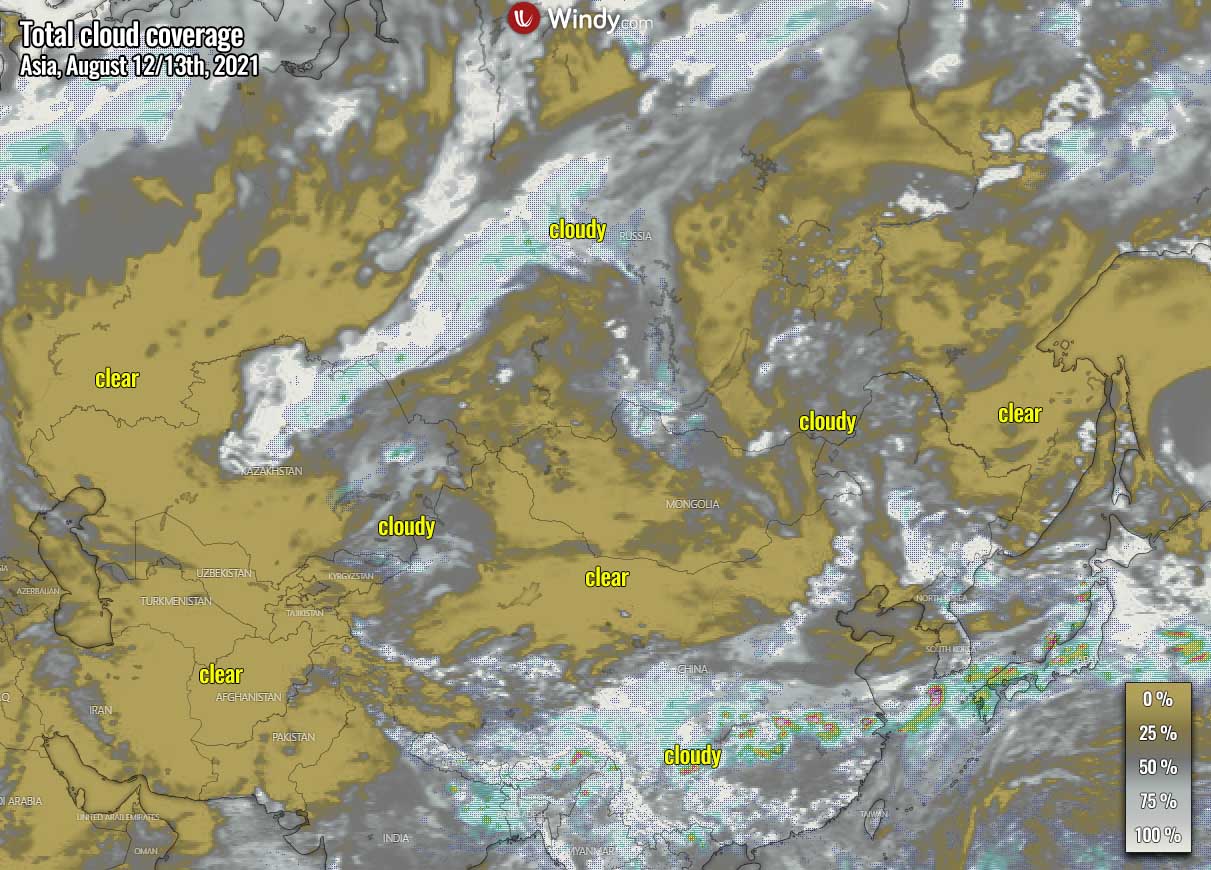 Have fun and enjoy your observations and thanks to New Moon, this could potentially be the greatest Perseids celestial display in years.

Feel free to report your observations to our SWE Report / Discuss Facebook group and if you catch some of them, we will be happy to share those with our followers worldwide!

Like the fellow astronomers and astrophotographers would say – CLEAR SKIES, everyone!