The effects of Polar Vortex split earlier this month are still well visible as a very dynamic pattern is ongoing on all continents in the northern hemisphere – Europe, Asia and North America. Europe will see another very dynamic week especially across western and southwestern parts and also the Mediterranean. The pattern supports blocking ridge across the Arctic region and progressive troughs with deep cyclones from Canada across the North Atlantic into western Europe and further towards the Mediterranean. Lets take a look over daily pattern evolution across our continent.

A deep trough is moving from the western into central Europe and digs also into the Mediterranean region. The main surface cyclone will be centered over Denmark and southern Sweden, while a secondary low will move across the northern Mediterranean and north Balkan peninsula. The associated cold front will bring quite some rain into this region while colder airmass will spread behind the front, resulting in rain changing to snow across the N Balkan countries during the day. A deep trough/low south of Greenland develops an intense cold outbreak across the north Atlantic, moving towards western Europe. Warm advection pushes across the eastern Balkan peninsula and the Black Sea region. 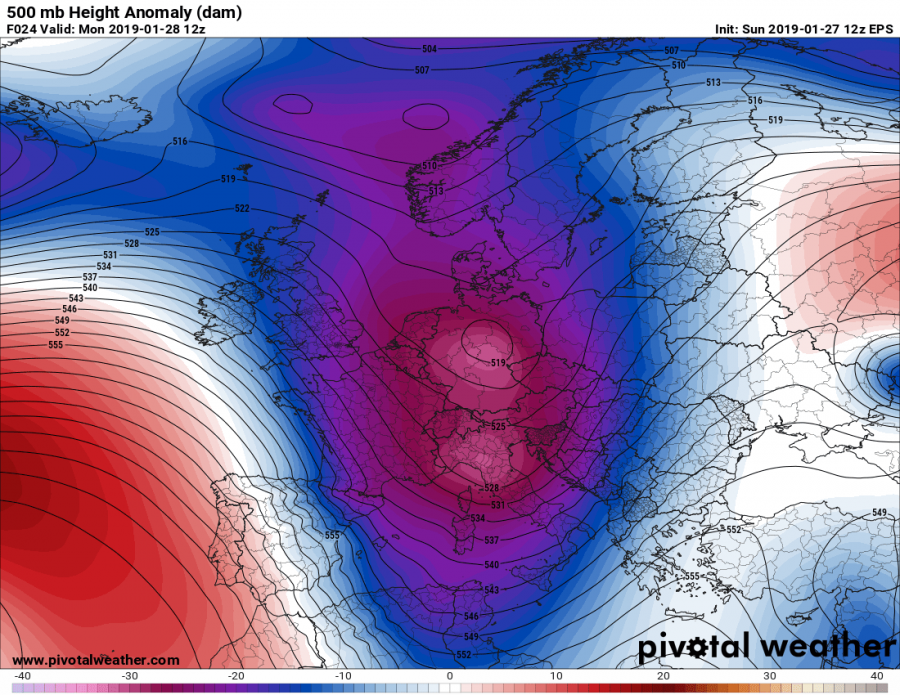 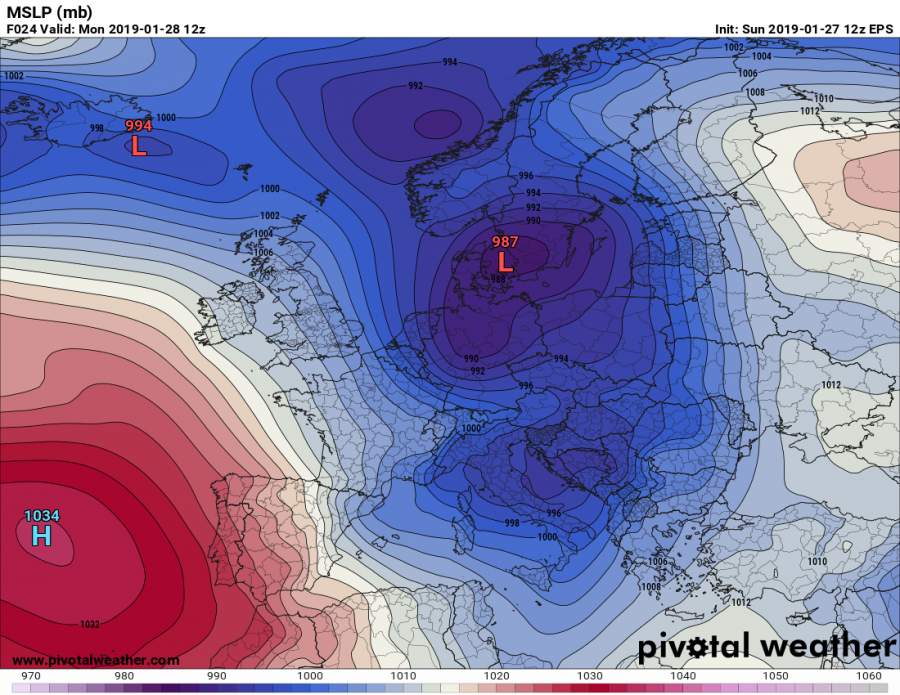 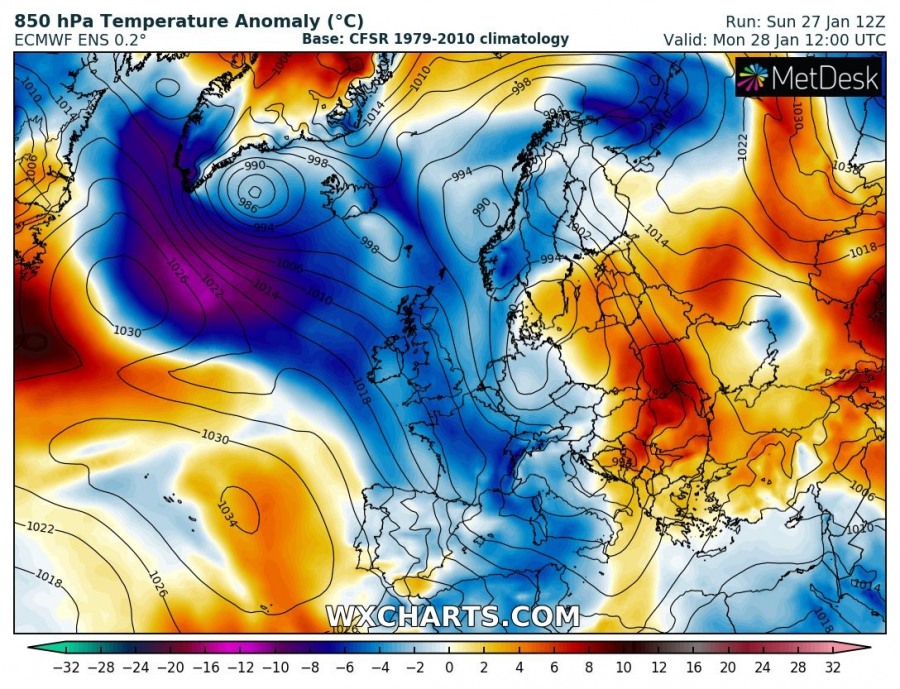 A deep trough/low south of Greenland drifts towards western Europe while the central European trough weakens while moving east. A short wave trough crosses the British Isles and develops an intense cyclone on its southern flank where a severe windstorm is likely to form over WNW France. The cyclone over the north Mediterranean drifts into the south Balkan peninsula, centered over Greece and results in excessive rainfall there. Warm advection continues across the E Balkan peninsula, Black Sea region and also spreads across the northeast Europe, Finland and into western Russia. Very cold airmass from the north Atlantic reaches Ireland while cold weather maintains across the whole western, central and southern Europe in the wake of the Monday’s trough. 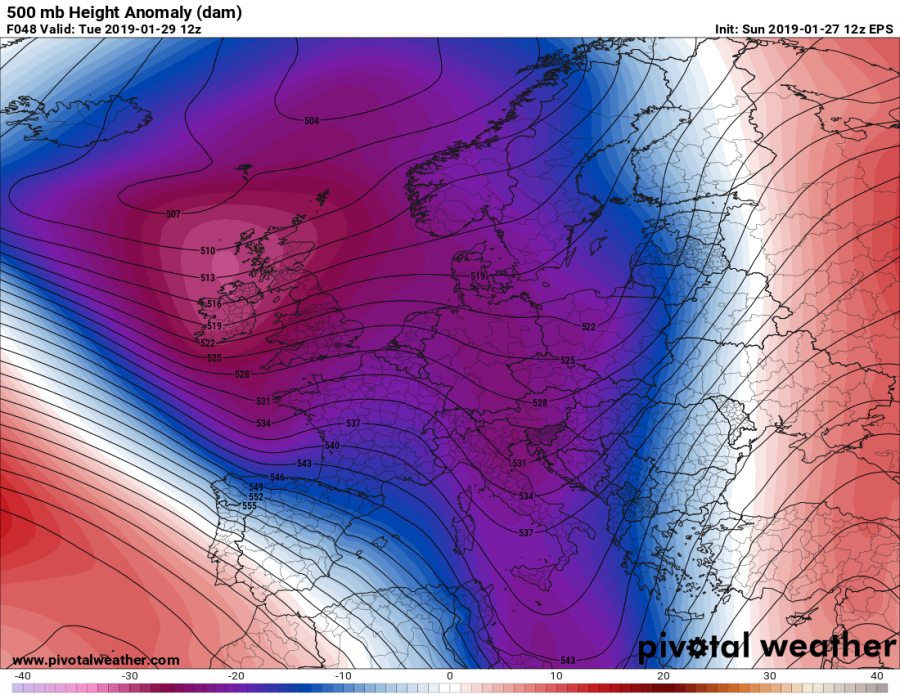 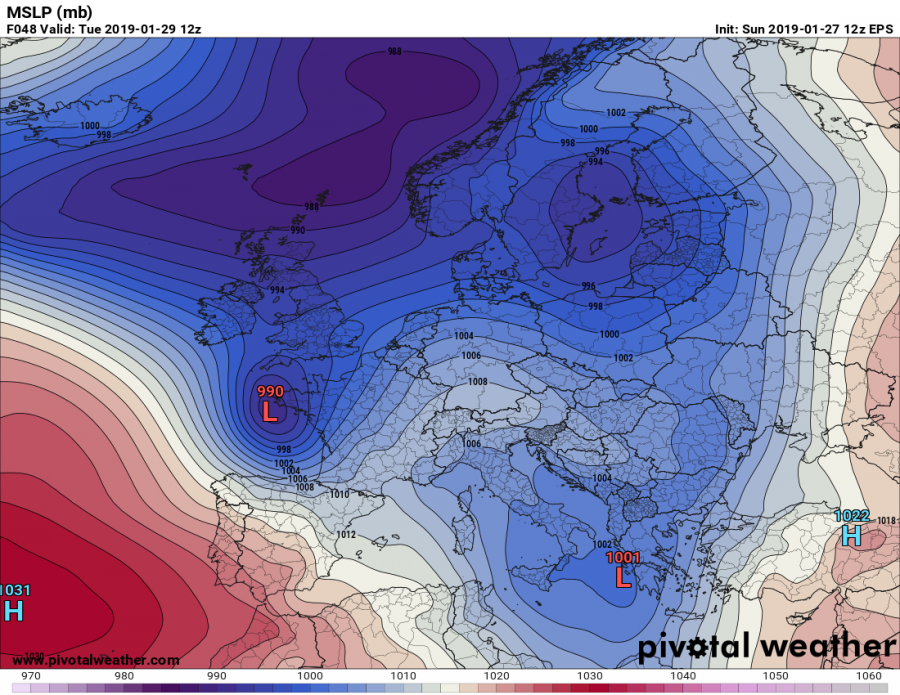 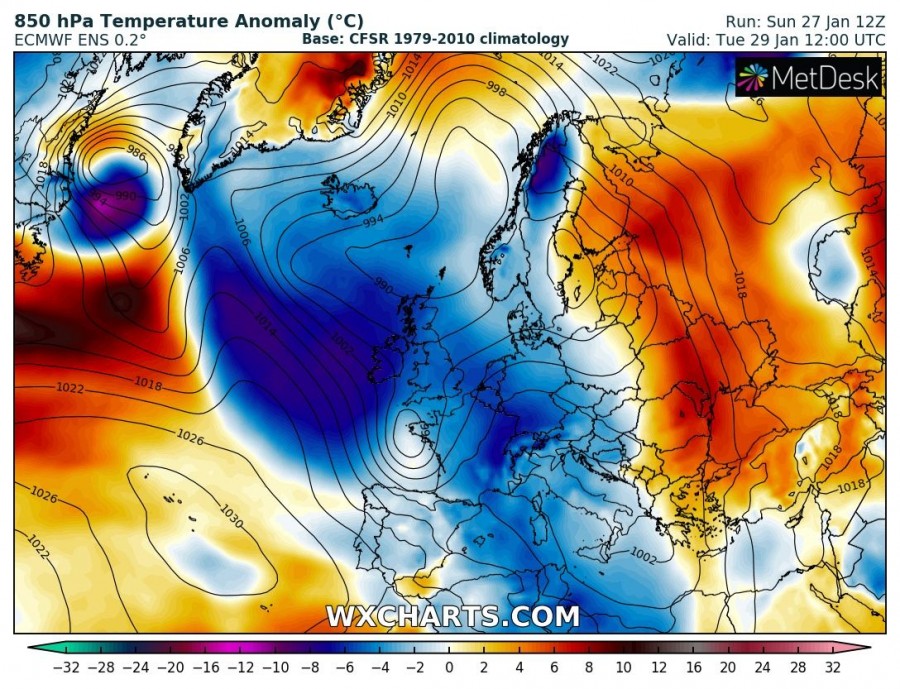 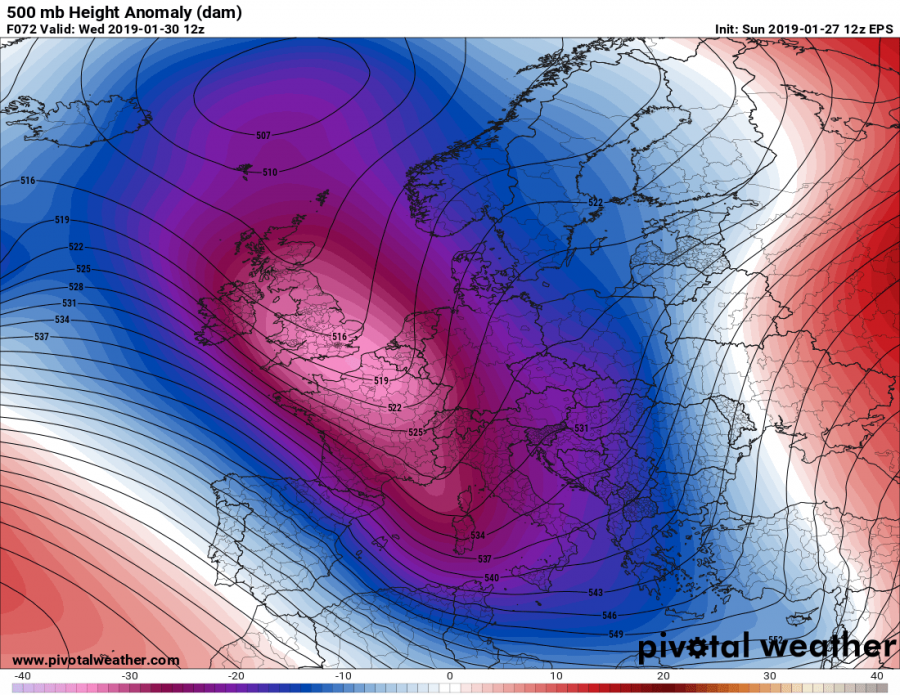 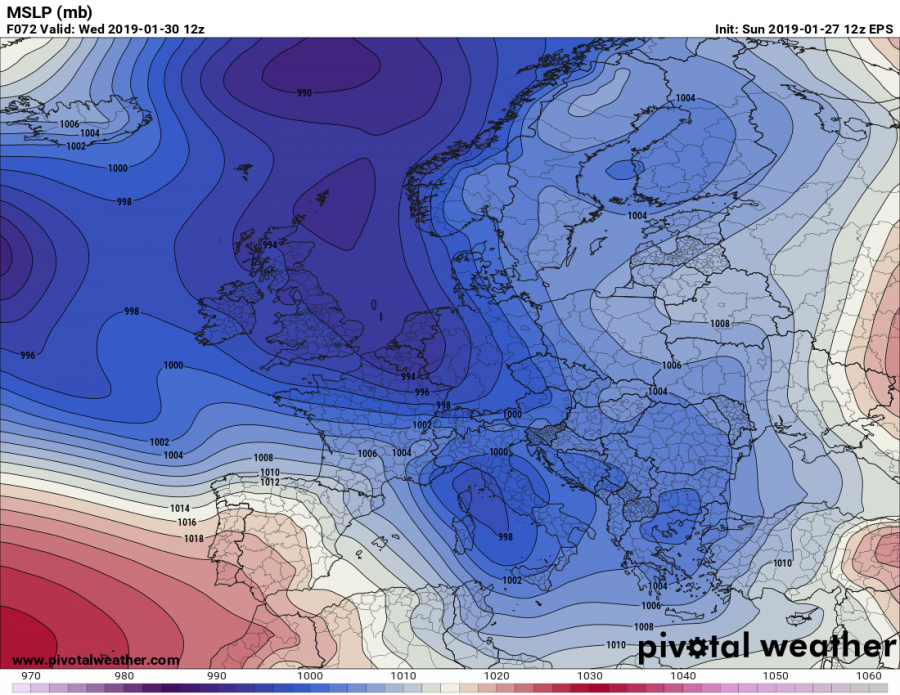 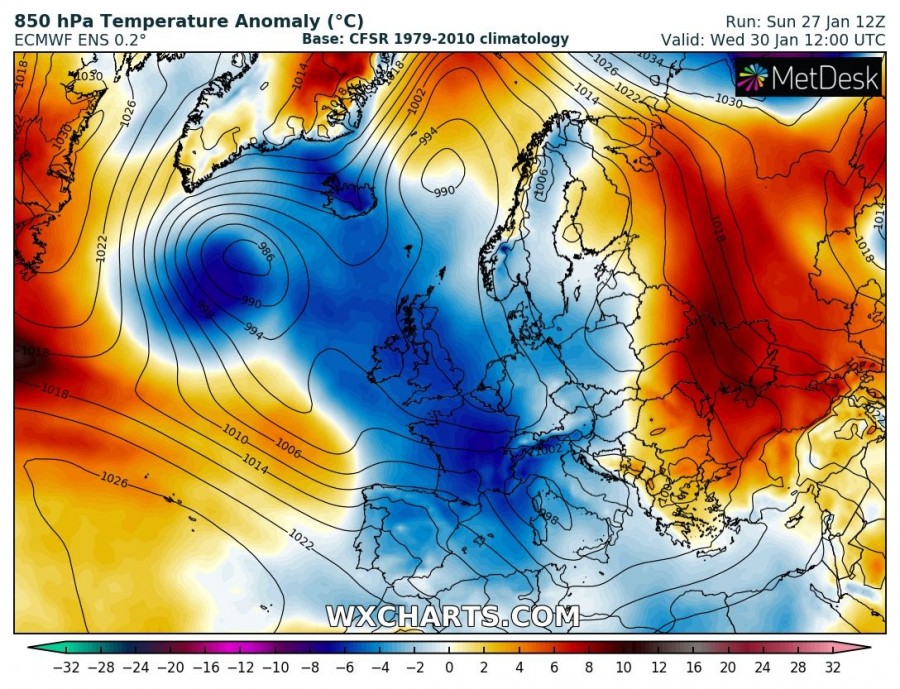 A very dynamic pattern develops as the intense trough over the north Atlantic results in a very deep and potentially dangerous cyclone towards western Europe. This system will bring a windstorm for the British Isles and likely France as well. On the trough’s front flank, an elongated short-wave trough pushes from central Europe and the north Mediterranean towards the Balkan peninsula. Very warm weather maintains across eastern Europe and western Russia. This pattern will support an excessive rainfall across the northern Iberia. 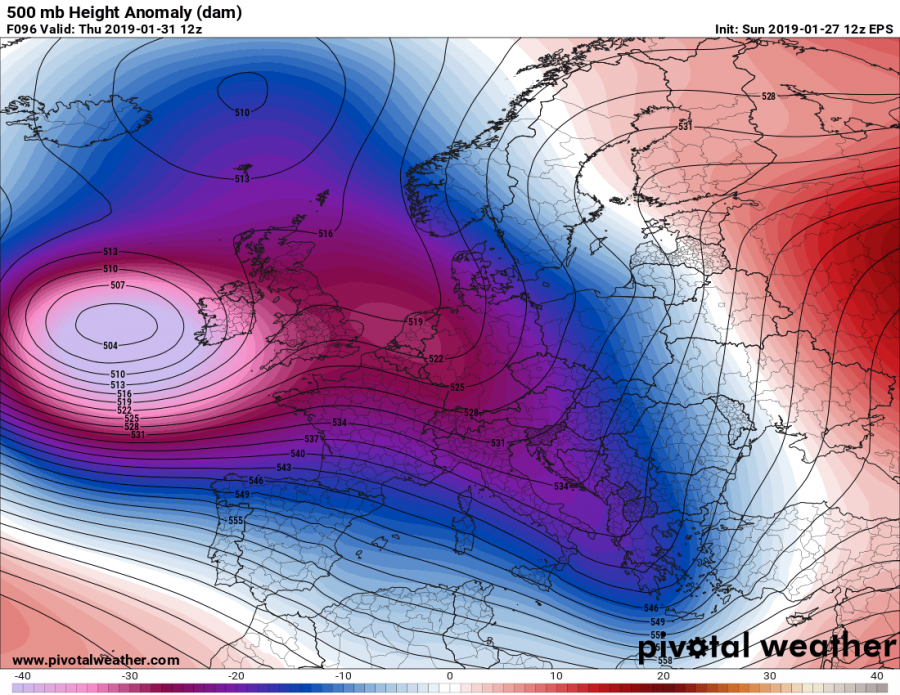 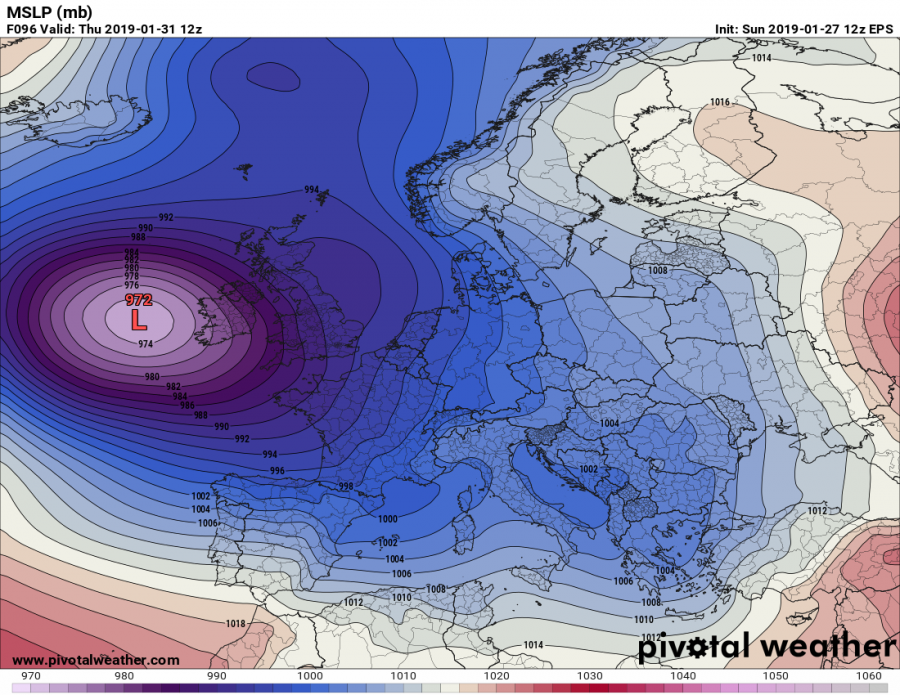 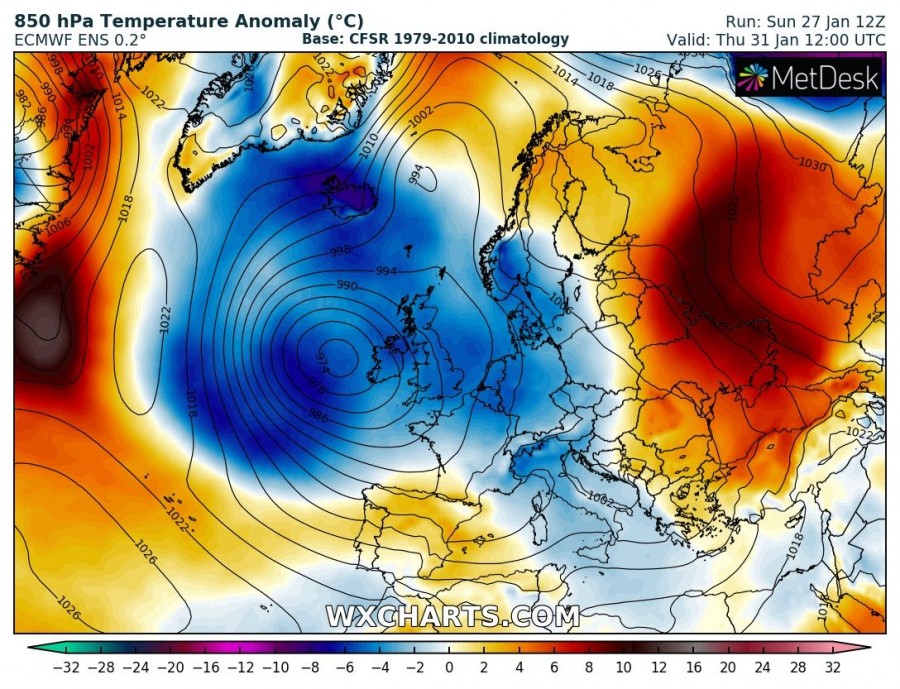 An impressive very deep trough / cyclone drifts from western towards southwestern Europe, centered over western France and the Bay of Biscay. A severe weather with an excessive rainfall will be ongoing across north and northwest Iberian peninsula (northwest Spain, north Portugal) while an intense windstorm will be possible around the Bay of Biscay and western France. Situation will worsen the ongoing flooding threat there. An intense orographic snowfall (Stau effect) will develop across the Picos de Europa (N Spain) and Pyrenees. Cold weather will some snow and winds will develop over the UK and Ireland. 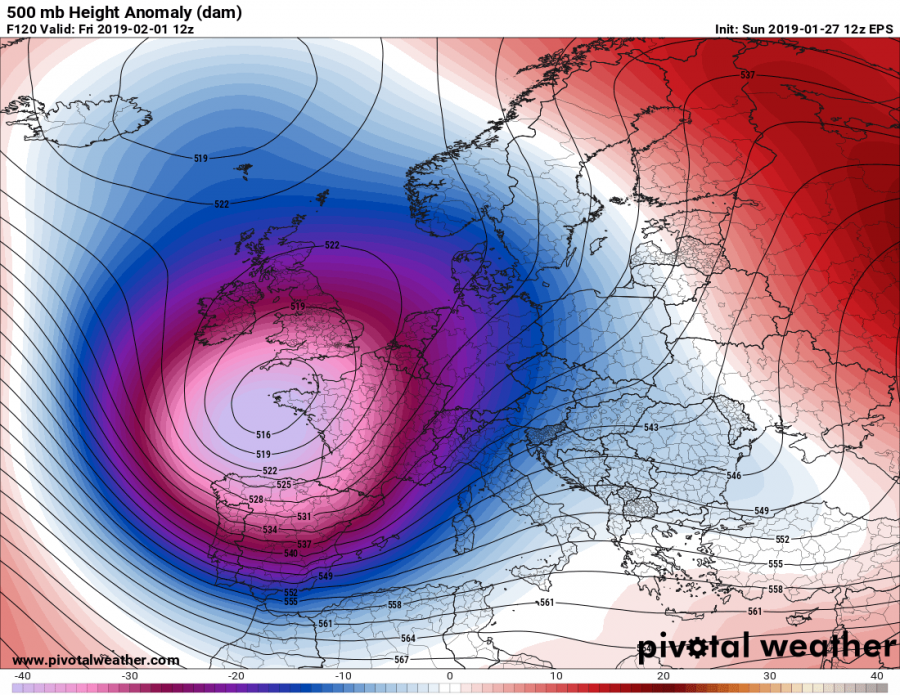 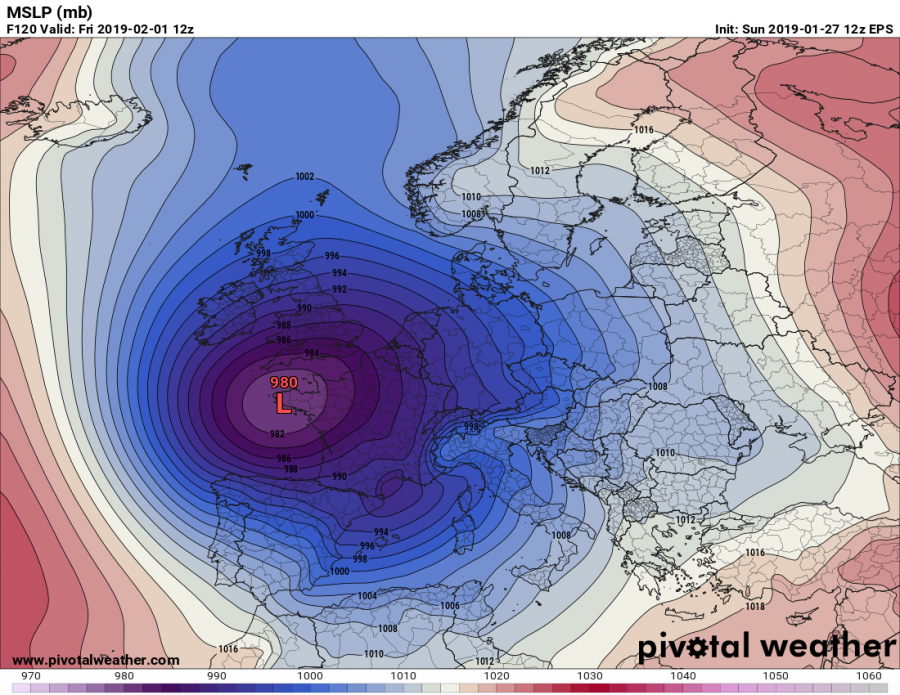 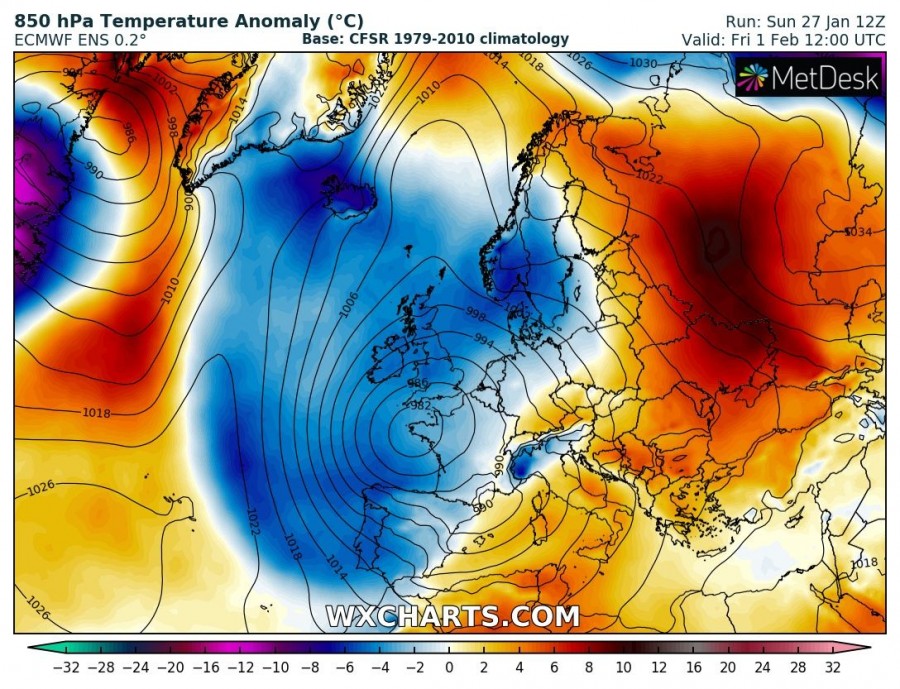 The very deep trough will gradually weaken while being centered over southwestern Europe, but spreading also into the western Mediterranean. An associated surface cyclone will move from northwest France towards north Germany. This pattern then develops a very warm/moist advection from the Mediterranean towards the central Europe and the Balkan peninsula. A very warm weather is expected across the southern Balkan countries. The result will be the development of an excessive rainfall event along the southern Alps and indeed intense snowfall in the higher elevations. Very cold weather spreads across the Iberian peninsula and northwest Africa (Morocco, Algeria) in the wake of the trough and brings snowfall into lower elevations as well. 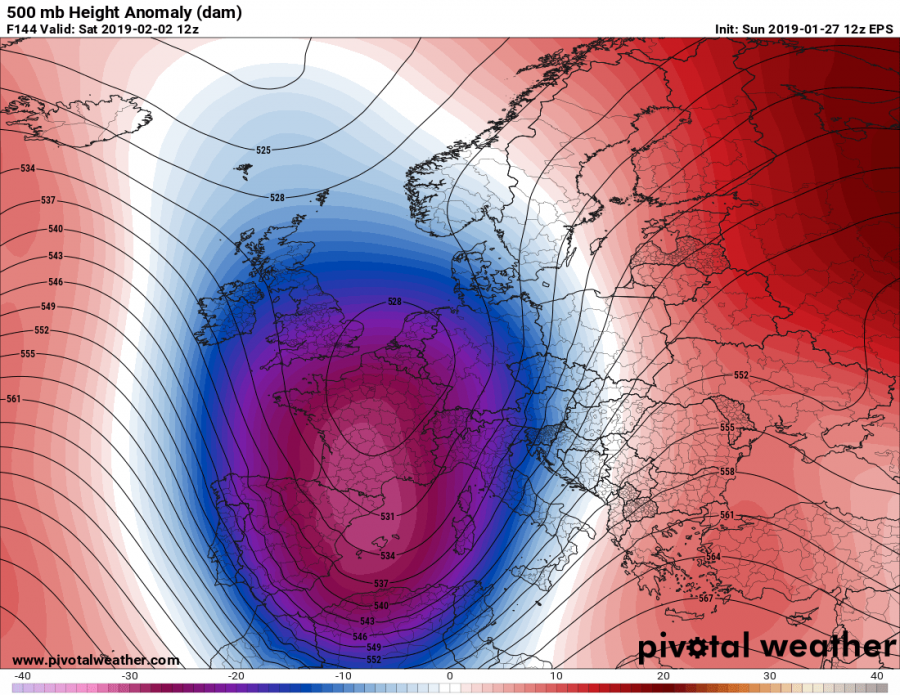 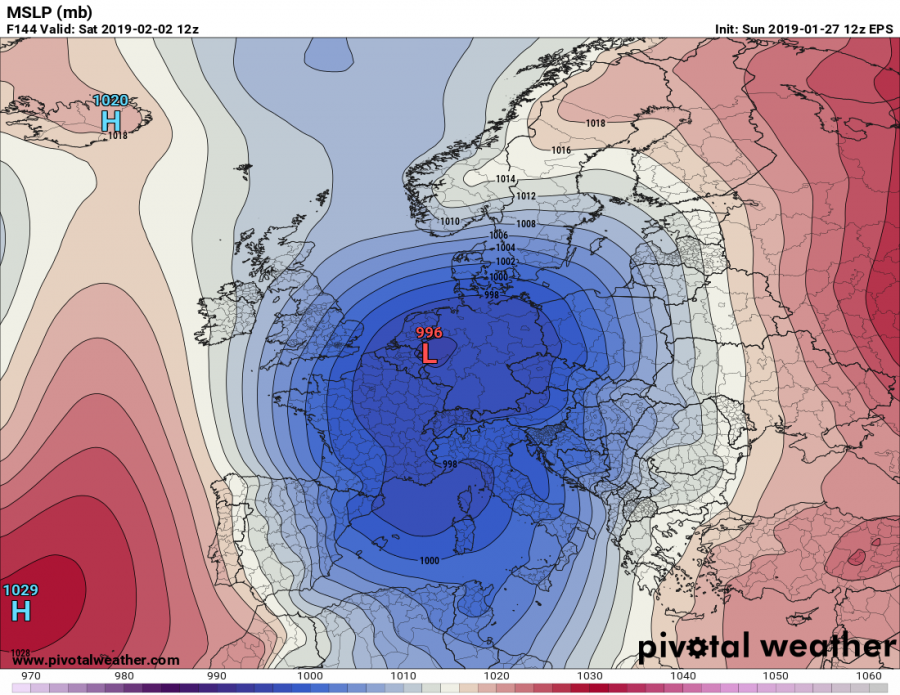 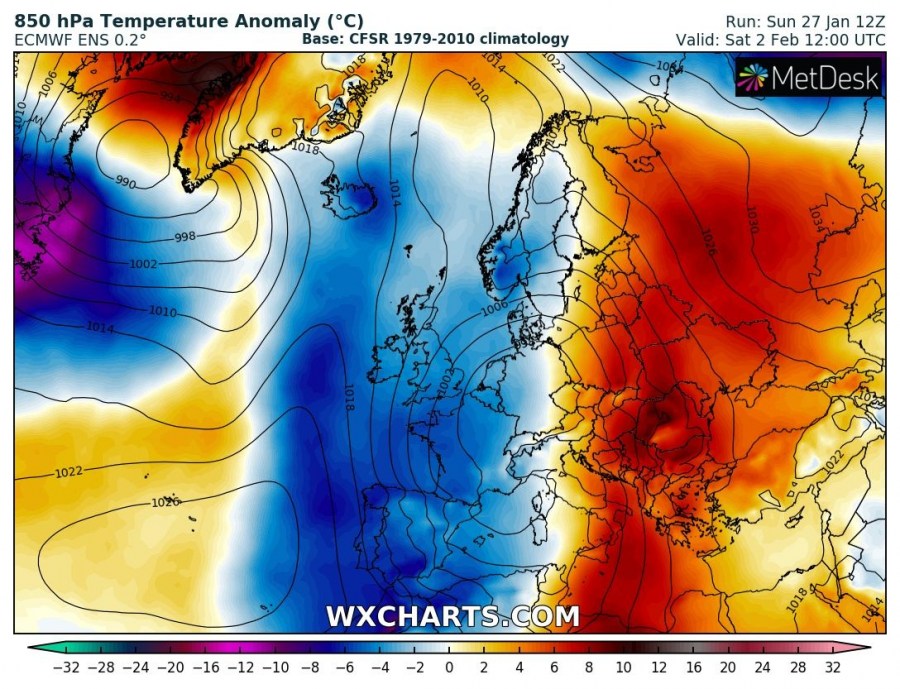 Deep trough moves into the south-central Mediterranean, develops a surface low over Italy and maintains a strong warm/moist advection towards the Balkan peninsula. A very warm day is expected from the central Balkan into the eastern Europe. Very cold weather maintains and even intensifies over the Iberian peninsula and France while excessive rainfall/snowfall event continues across the Alps and the north Mediterranean region. 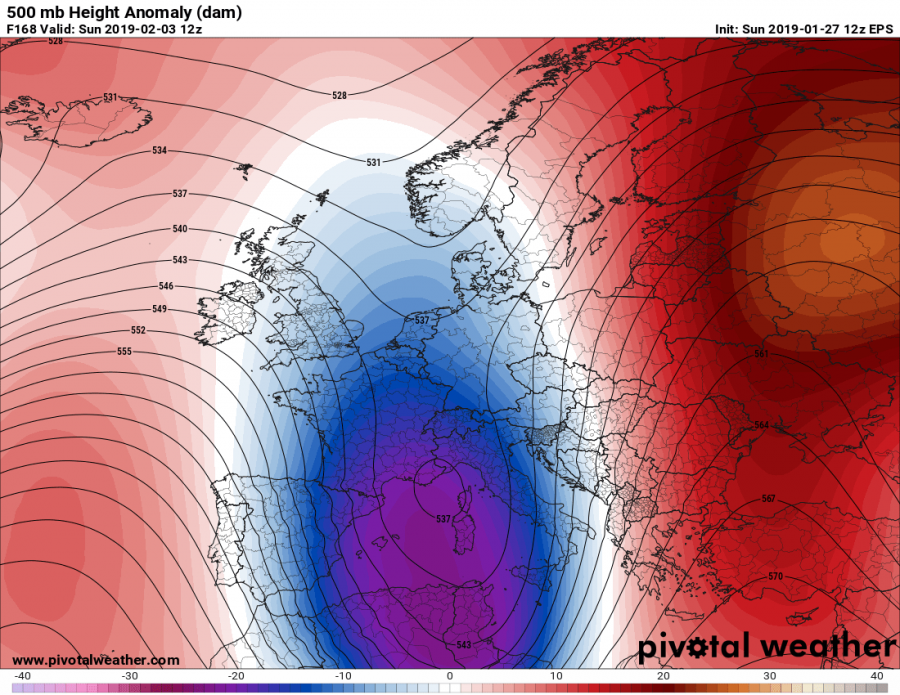 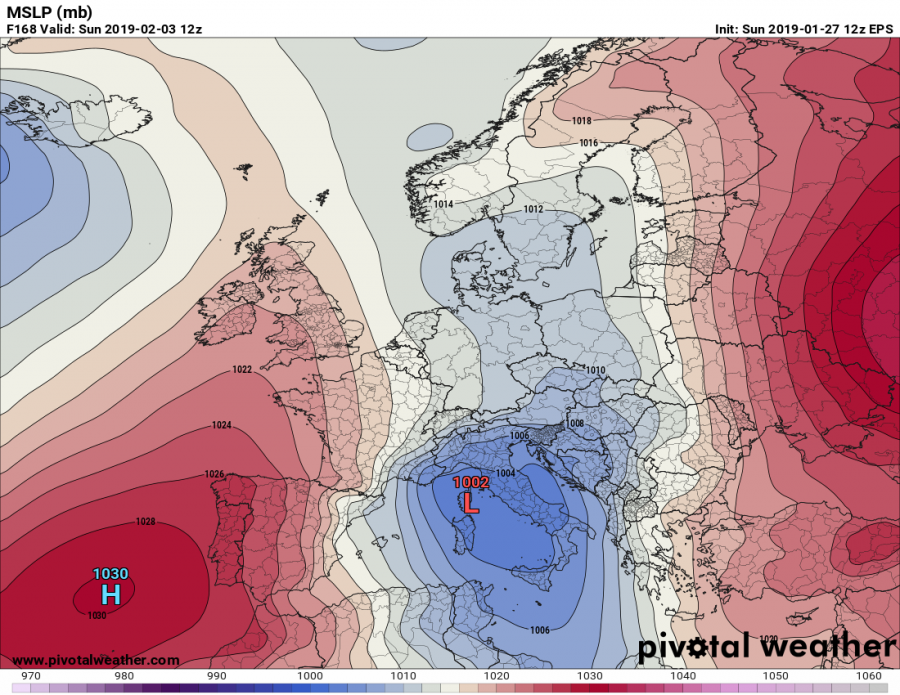 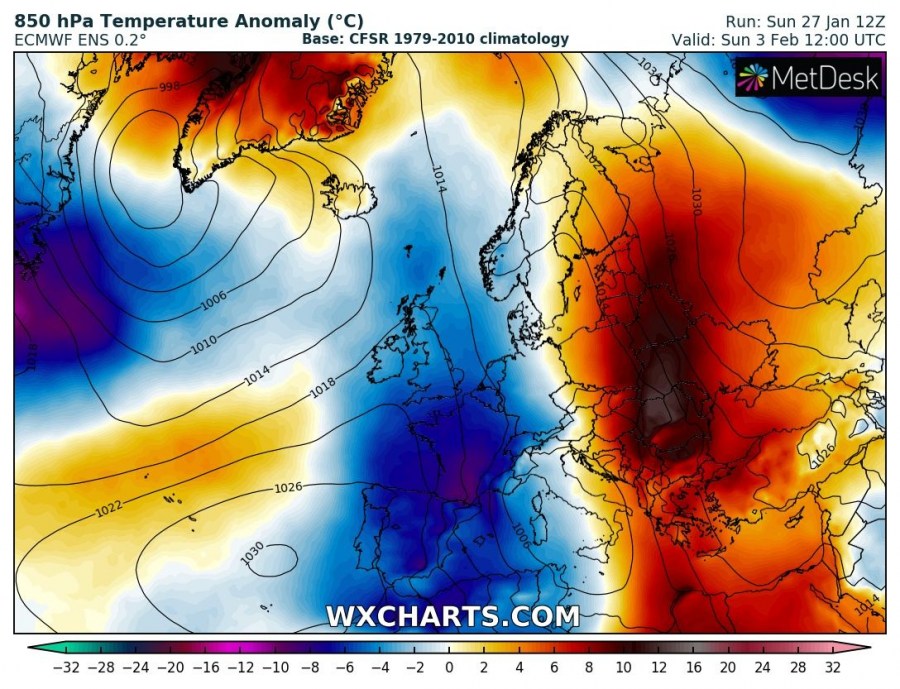 We will update the pattern evolution with further details on the system through the next days – stay tuned!