A complex severe weather setup is unfolding over the northern and central Mediterranean. Expect widespread, locally severe thunderstorms across the region. Significant threats for torrential rainfall and flooding. Also enhanced threat for tornadoes.

On Sunday a complex situation will have developed, with several surface lows under the broad trough. One surface low will likely develop over north Italy, pushing into the northern Adriatic sea. A second cutoff low will push across the Tyrrhenian sea, pushing into the southern Adriatic and the Ionian sea by late on Monday. Strong to extreme instability will build up across the Tyrrhenian sea on Sunday, with up to 2000-3000+ J/kg MLCAPE. On Monday the northern Adriatic will see the build up of moderate instability, up to 1000 J/kg MLCAPE, while the central and southern part of the Adriatic will go up to 2000 J/kg and parts of the Ionian sea up to 2000-3000 J/kg MLCAPE. Strong southerly to southeasterly winds will be in place across warm sectors of these lows.

A second disturbance will be pushing from the Atlantic across France on Sunday and Monday. Expect an additional 30-80 mm of rainfall across SE France from this system by early on Monday.

The main threat with all thunderstorms in the region across the next 2 days will be persistent rainfall and flooding. Training thunderstorms are expected to form, particularly along the warm front in the Ligurian sea and successive slowly moving convergence zones along the coast of the Tyrrhenian sea on Sunday. Convective rainfall will be enhanced by upslope flow and orographic rainfall along the western slopes of the Apennines. Expect further convergence zones to form over the north Adriatic and in the Kvarner bay, and likely further south in Dalmatia as well. 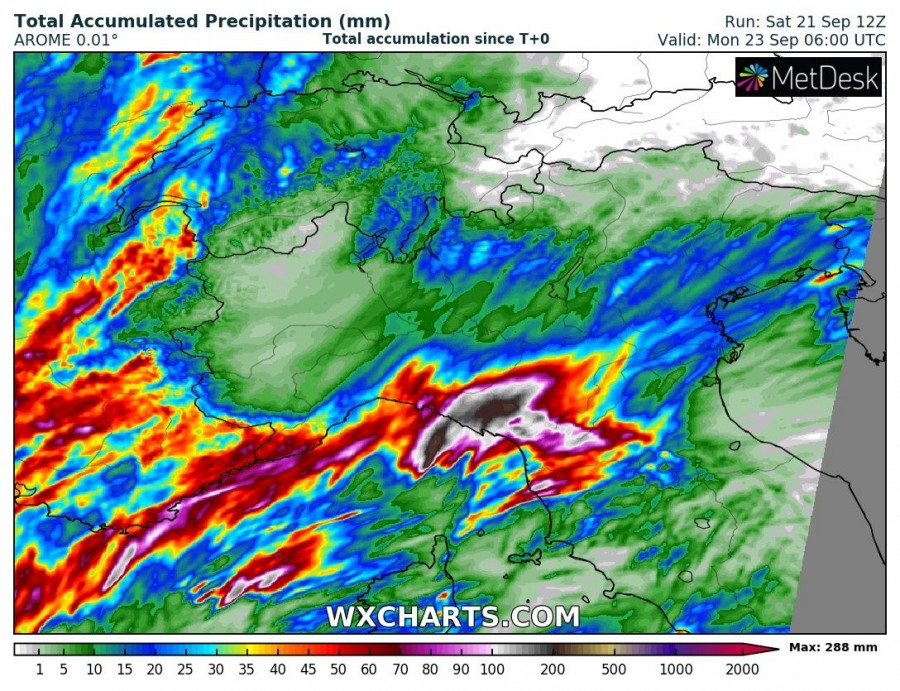 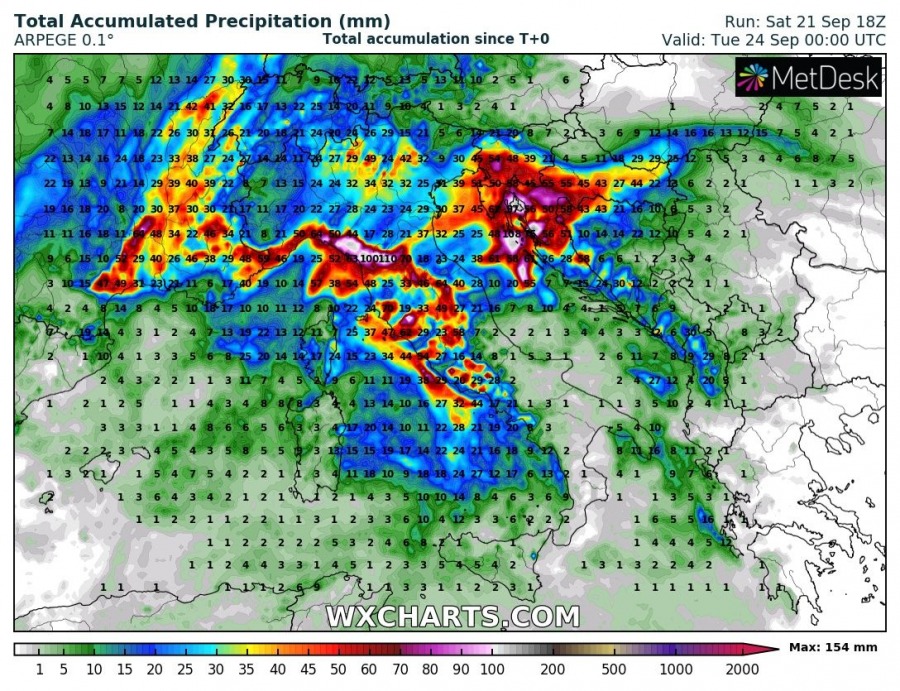 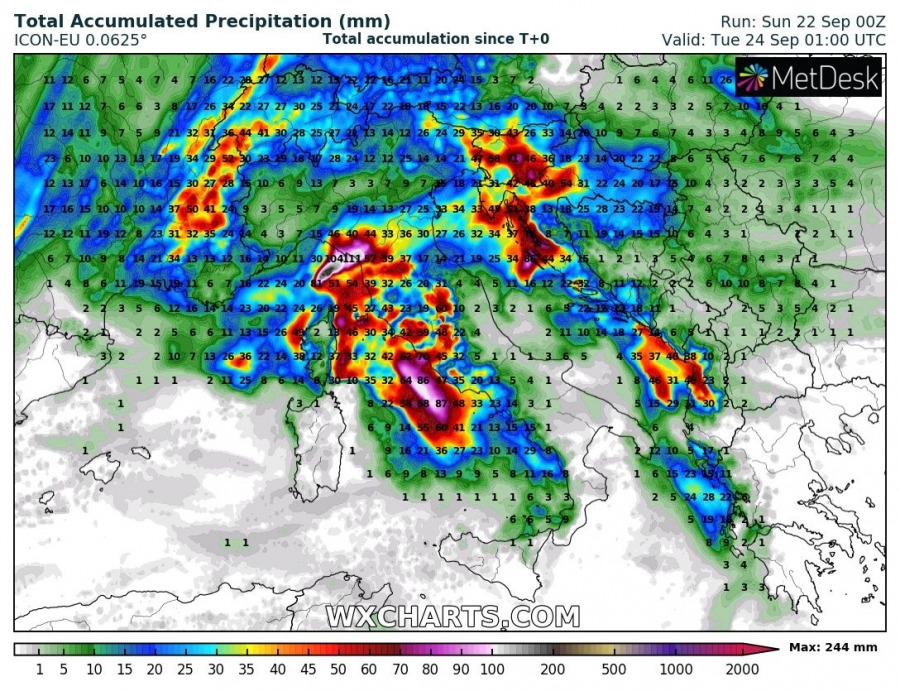 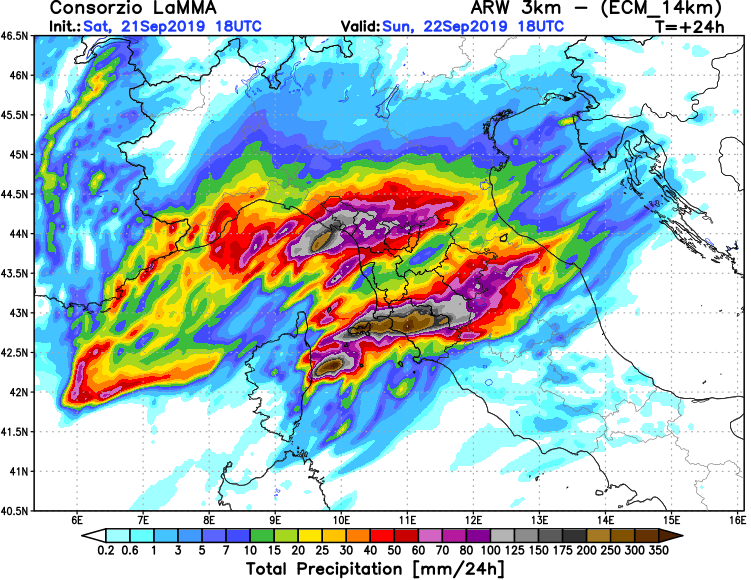 In particular the coast of Liguria and Tuscany will likely see very slowly moving / stationary training cell convective lines, producing up to 200-300 mm of rainfall on Sunday. Intense, if fairly localized flooding is likely! Stay alert in these regions, the situation can become life-threatening.

There is more uncertainty about the rainfall totals and locations of most intense rainfall. However, rainfall totals in excess of 100 mm by the end of Monday seem likely in Kvarner. Other areas along the eastern Adriatic coast will likely experience torrential rainfall, depending on exact locations of severe thunderstorms and convective lines.

With the moderate to strong westerly to southwesterly mid-level flow (20-40 kt at 500 mbar level) and southerly to southeasterly low-level flow ahead of surface lows, the environment will be strongly sheared across most of the region. Up to 30-50 kt deep-layer shear and 150-300 m/2s2 (locally more) SREH3 will be in place across the region. Combined with moderate to strong, locally even extreme instability (1000-2500 J/kg, locally up to 3500+ J/kg MLCAPE), the environment will be supportive for severe supercell thunderstorms. PWAT will be in 40-45 mm range (!!), so expect high-precipitation (HP) supercells. 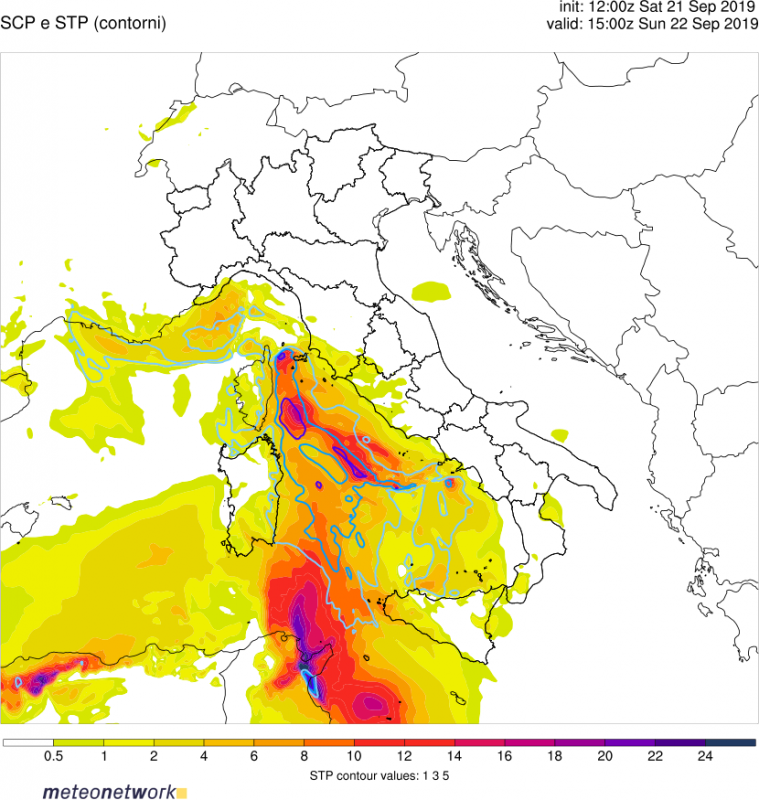 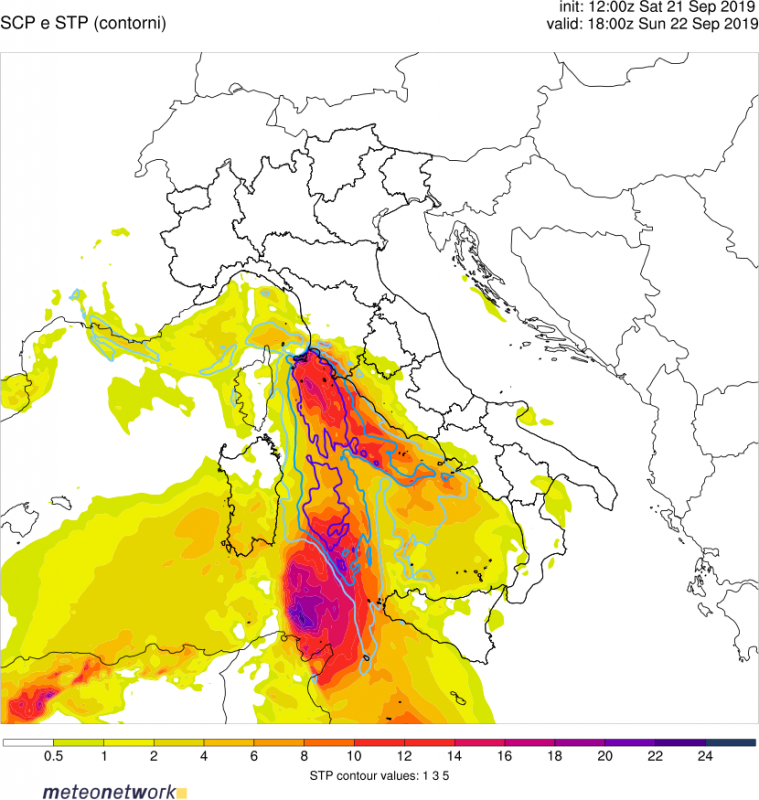 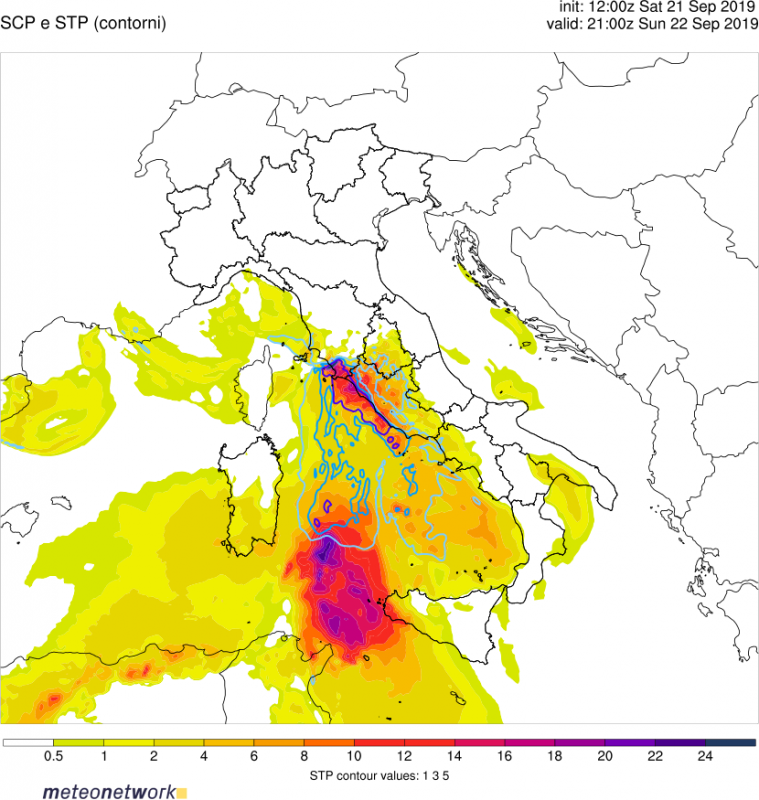 Strong low level (0-3km) CAPE will be in place along surface convergence zones over parts of the Ligurian and Tyrrhenian seas on Sunday, reaching values in 200-400 J/kg range. Also in place will be strong low level shear and helicity: up to 150-300 m2/s2 SREH1 and 20-30 kt low level (0-1 km) shear. Combined with very low LCLs in 300-500 m range, any supercell forming in this environment will have strong potential to become tornadic. A strong tornado is possible. While most of the threat will be over the sea, storms reaching the coast or forming in the coastal area on the eastern coast of the Tyrrhenian sea will present an enhanced threat for tornadoes! As supercells will be high-precipitation, any tornado could well be rain-wrapped and hidden from view.

Similar conditions will be in place over the Adriatic sea early on Monday. Strong southeasterlies will be present in the warm sector ahead of the surface low, increasing low-level shear and helicity. LCLs will be generally below 500 m and PWAT values in 40-50 mm range! Again, expect any strom in the region to have the potential to become (an HP) supercell, with a significant tornadic potential. In particular, the southern part of the eastern coast will likely see the highest potential for tornadic storms, with the best overlap of instability and shear.