After a rather active convective period through the first days of this week, we take a look at the pattern evolution through the rest of this week and early next week. Rather stable conditions are developing as ridging pattern strengthens again, near-normal to slightly warmer than average temperatures are expected. No large scale weather systems supportive of severe weather are foreseen.

The current pattern reveals a deep trough over the N Atlantic with a strengthening ridge ahead of it towards central Europe, in the wake of a decaying upper low over the Mediterranean. Strong SW jet stream in between is resulting in warm advection towards the NE.

The pattern through the weekend suggests a ridge over west-central Europe should strengthen as the deep trough over N Atlantic will be pushed into N Europe. This will bring warmer weather into the region and cooler weather into Scandinavia. Some weak/low geopotentials will remain over the southern Mediterranean where unstable weather is expected.

Early next week, the pattern remains similar as over the weekend, as the large upper ridge dominates much of our continent and stable weather continues. Some convective activity will be mostly confined to the southern Europe.

Available instability (CAPE) maps through the weekend reveal where best moisture for convective storms will be, central, eastern and across much of southern Europe where warm Mediterranean sea fuels the boundary layer with high dewpoints. 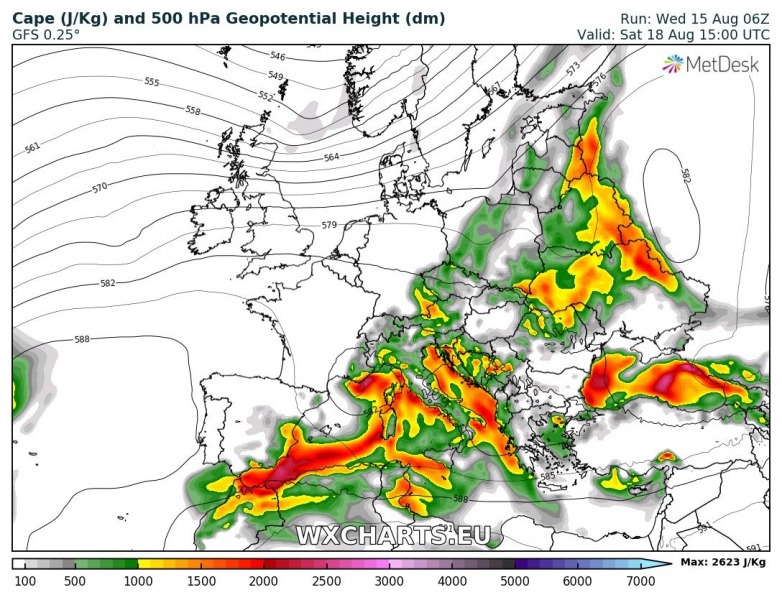 However, with the lack of jet streams and deep layer shear, the overall pattern will not be favorable for large scale convective systems. Some more organized storms can be expected over far southern Mediterranean where some better shear will exist within the sub-tropical jet stream.

Such a relatively stable pattern suggests a more near-normal temperatures across the west-central and SW Europe, warmer weather with return and a new heat wave is expected across ESE Europe and Balkan peninsula. Very warm also across the northern Europe.

GFS model animation of 2 m temperature for the next 7-10 days:

Here is the total rainfall accumulation until Tuesday, Aug 21st across our continent. No obvious large scale rainfall areas across much of Europe except SW Norway where several frontal waves are expected to bring lots of orographic rainfall through the rest of this week and early next week.

We will have another pattern overview update next week, stay tuned!