As discussed a few days ago, an outbreak of much colder airmass is scheduled this weekend across much of our continent. The pattern flips after a decaying intense cyclone over northern Europe with a building strong upper ridge over N Atlantic and W Europe, allowing cold airmass advection directly from the Arctic region far south into east-central, SW Europe and over the Balkan peninsula. Although the wave will be relatively short (4-6 days), it will bring some snow in parts of eastern and central Europe and finally some colder winter days. Very cold weather will remain over Scandinavia.

This morning, the cold outbreak and advection was well visible over northern Europe, gradually moving south across Scotland and S Scandinavia. While still relatively mild weather was present further south. Very cold weather was over Lapland (N Sweden and Finland).

Cold outbreak has started progressing south from the Arctic region as seen on the windchill map (the effect of winds on temperature) this morning. The front is already across S Scandinavia and Scotland, continue with advection south- much colder airmass coming tonight! @meteociel pic.twitter.com/kkHjAuRmYt

The cold advection continues south tonight and is going to spread across a large part of Europe through the weekend into early next week. Two waves / cold blasts are actually foreseen by the models.

Friday, Nov 29th – in between the large long-wave trough over NNE Europe and a strengthening upper ridge across the N Atlantic, meridional flow establishes tonight and pushes cold airmass towards central Europe. Ahead of the surface front, mild weather conditions persist across eastern and southern Europe. 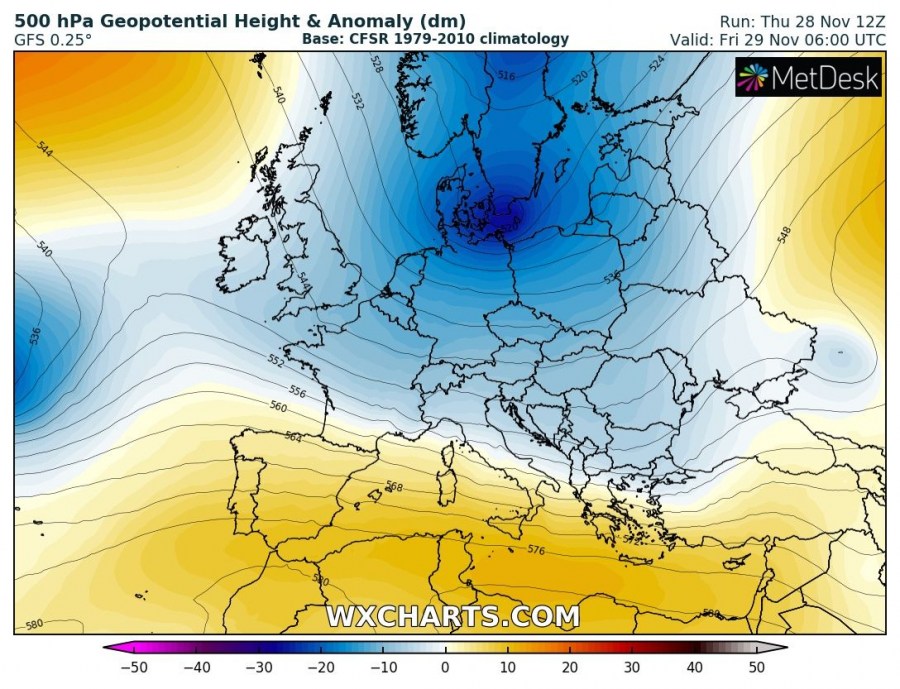 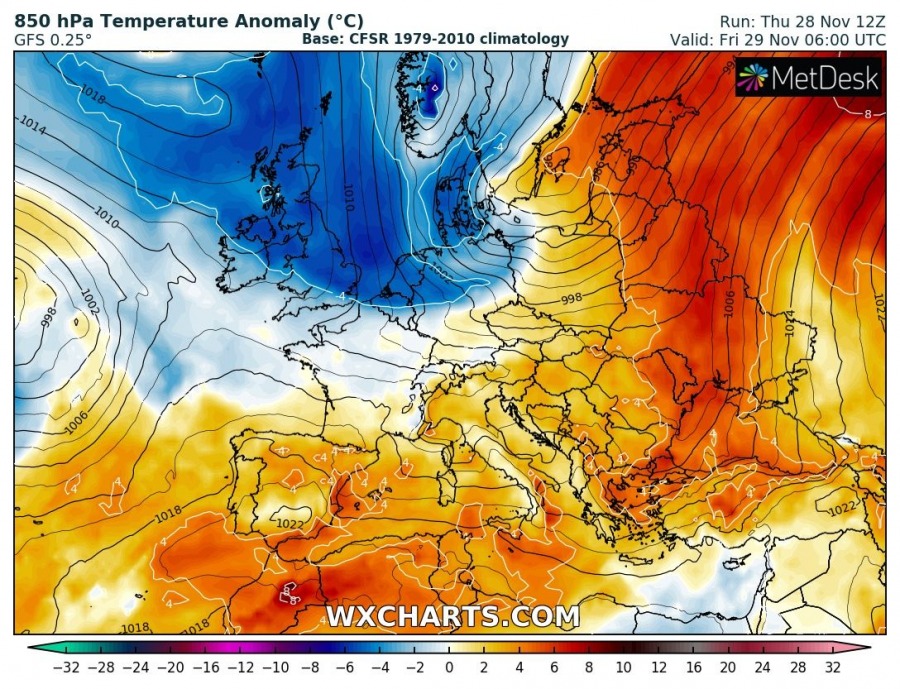 Weekend, Nov 30th & Dec 1st – the upper trough strengthens over Baltic region and NEW Russia, allowing stronger advection from the Arctic towards east-central Europe. An upper low ejects into the Bay of Biscay and develops a cyclogenesis towards NW Iberia on Saturday. Cold weather also spreads across the UK. The surface cold front already reaches the Black sea region on Sunday morning. 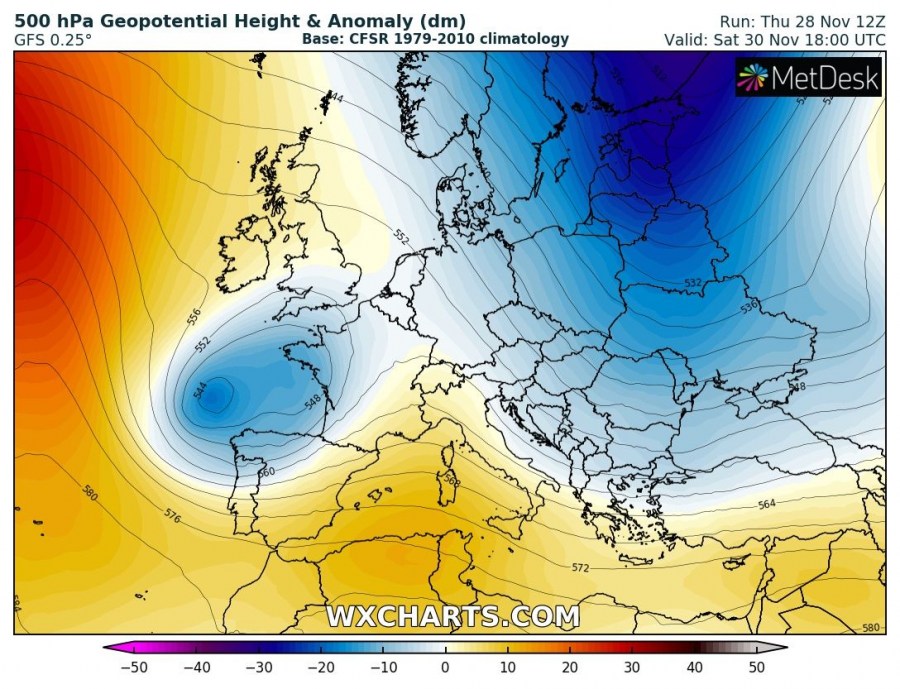 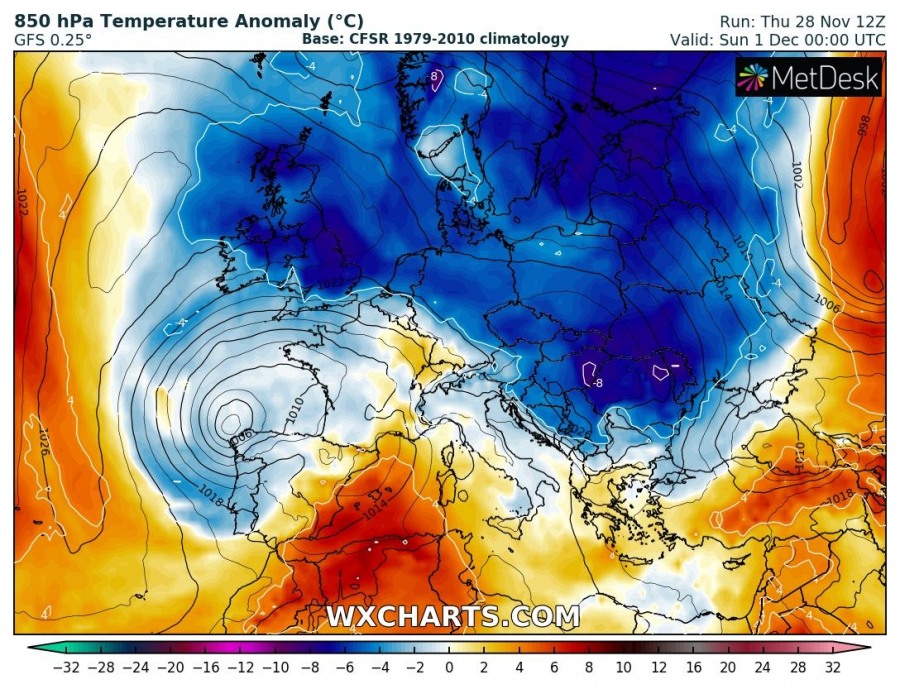 Monday, Dec 2nd – the N Atlantic ridge intensifies while gradually expanding into western Europe as well, while to the east the cold advection continues into far SE Europe and Turkey. As a result of the tightening pressure gradient to the east of a strengthening ridge, cold advection becomes stronger also towards the SW Europe, combined with the upper low now moving over Iberia. Warm advection spreads towards the Alps again in front of the surface cyclone over the W Mediterranean. 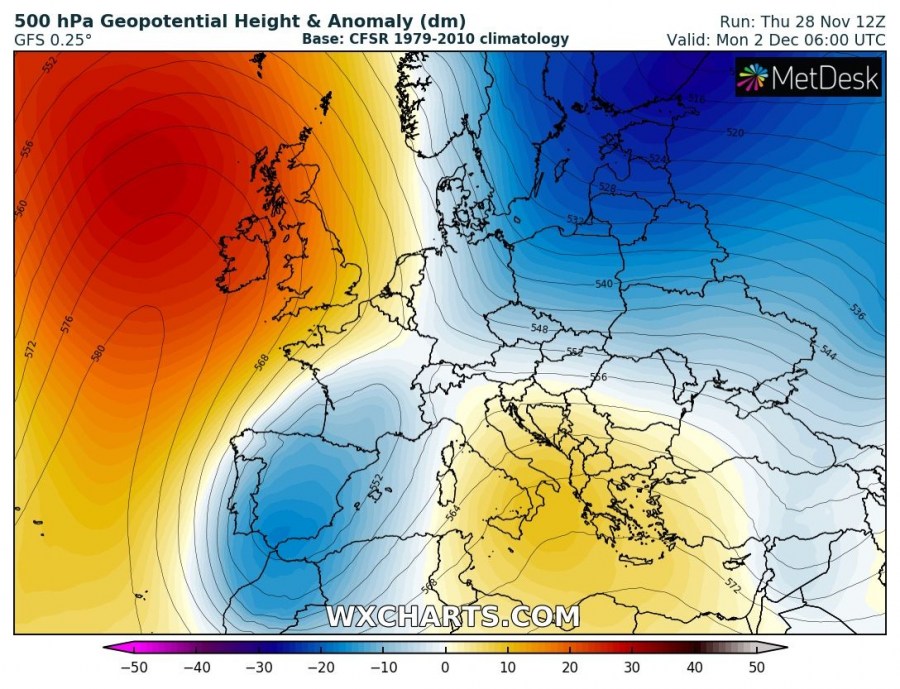 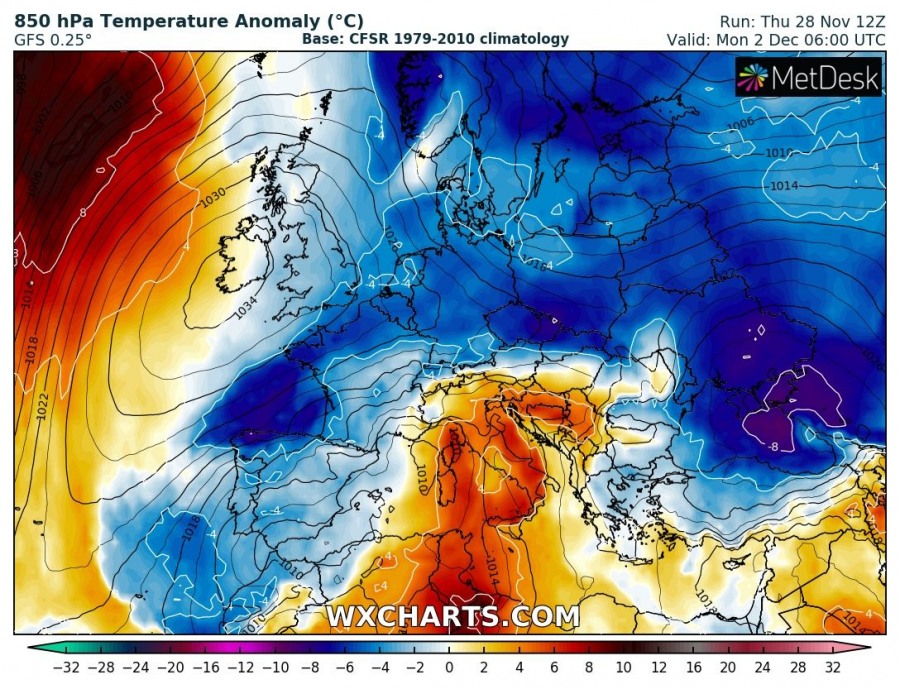 Tuesday, Dec 3rd – early next week, the strong ridge establishes over W Europe while the upper low over Iberia and W Mediterranean cut off into NW Africa. Further east, another cold-core develops over ENE Europe and results in a secondary wave od very cold airmass spread into eastern Europe, partly also into central Europe and indeed the Balkan peninsula. A sharp cold front associated with the wave brings rain turning to snow across parts of the western Balkan peninsula. While much warmer temperatures return under the ridge across western and N Europe. 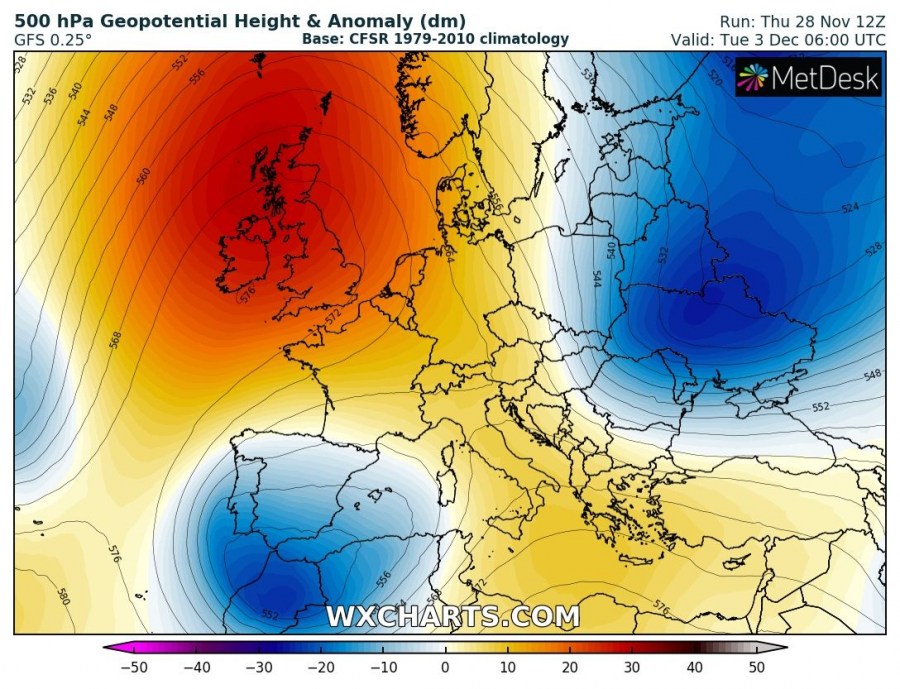 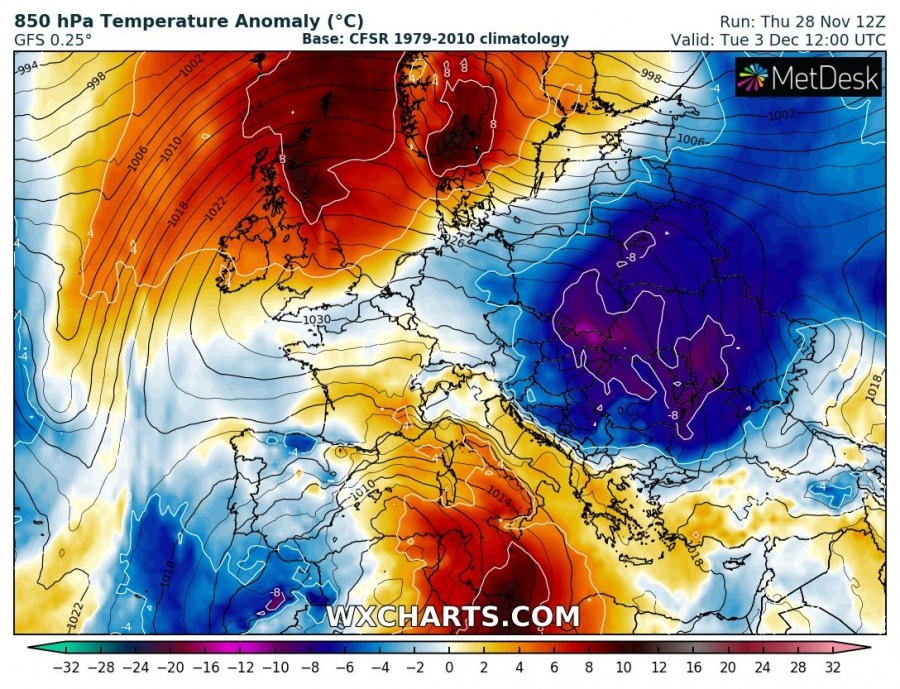 Here is an animation of 850 mbar temperature anomaly through early December where we can perfectly see how to cold advection gradually spreads across much of Europe. It’s not particularly severe, but it at least temporarily brings temperatures to normal or below normal values for early December in many areas. After severe weeks of unusually warm weather over our continent.

Latest GFS model guidance for the strong cold advection across Europe through the end of November into early December. Cold air mass spreads across a large part of Europe and also brings snow in some areas – stay tuned for fresh forecast details soon! Map: @wxcharts pic.twitter.com/1N3hnG28KY

Until Wednesday, quite a lot of precipitation (snow or rain) is expected over the W Scandinavia due to persistent NW flow and related orographic snowfall over Norway and over the WNW Mediterranean (including W Alps) where upper low and an associated surface cyclone bring stormy and rainy weather with enhanced threat for flooding. 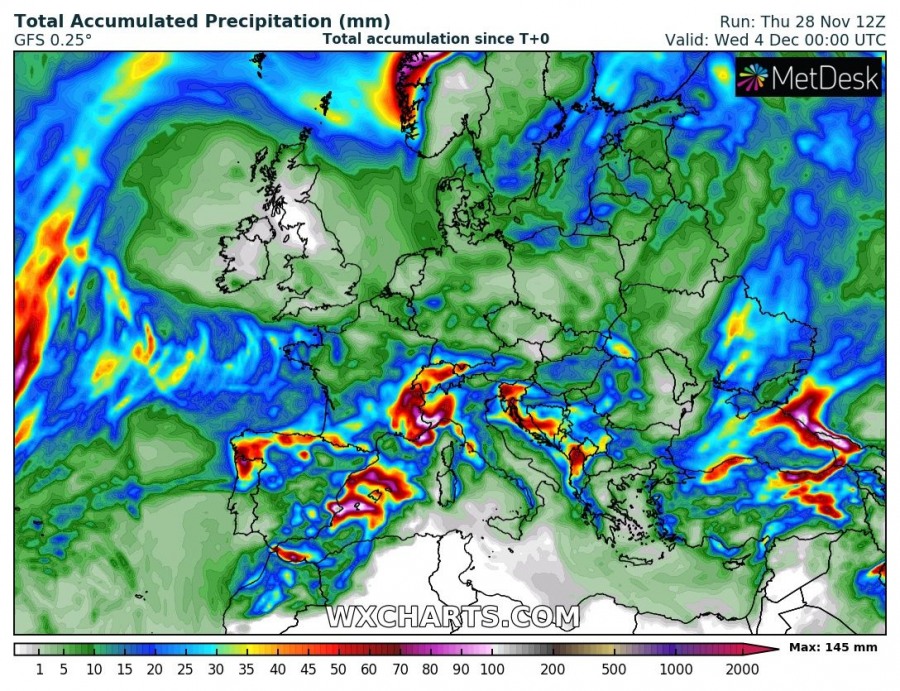 GFS, ICON-EU and ARPEGE models are quite in good agreement for snow chances across parts of east-central Europe and the Balkan peninsula. Especially on late Monday when a secondary wave pushes through with a sharp cold front and rain turning to snow in some of the lowlands. 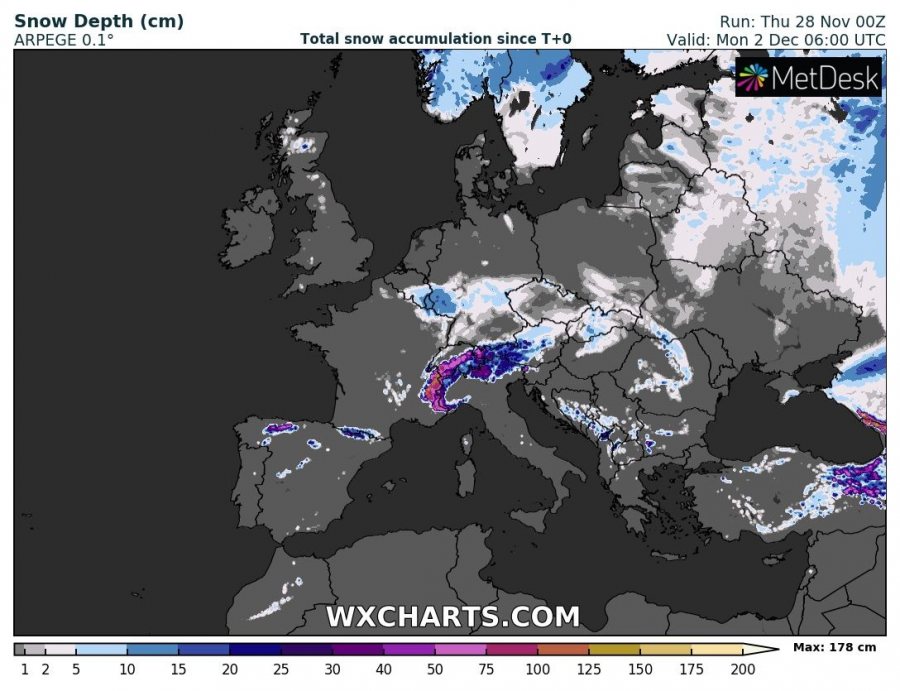 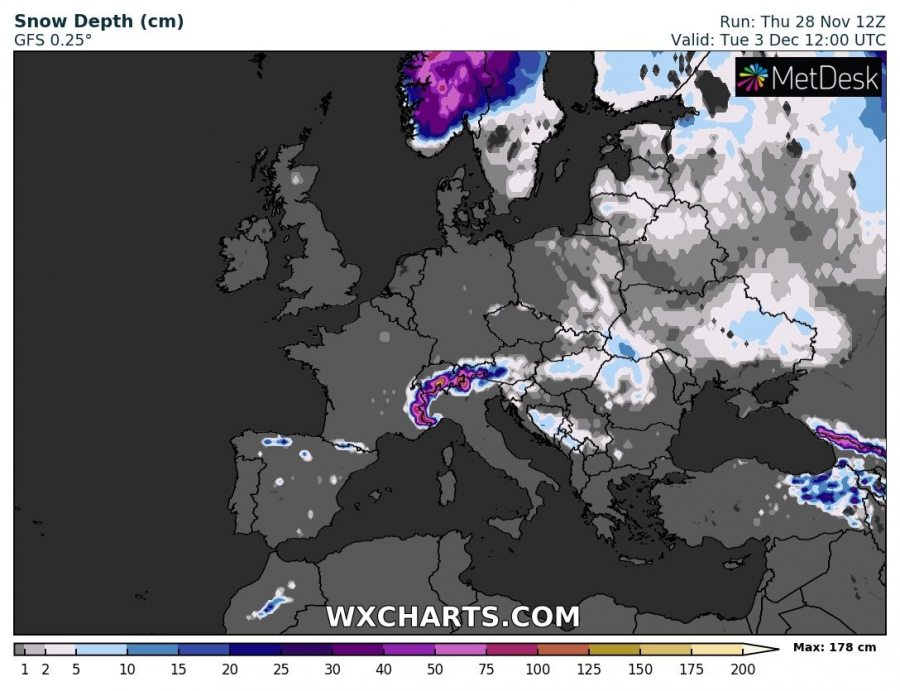 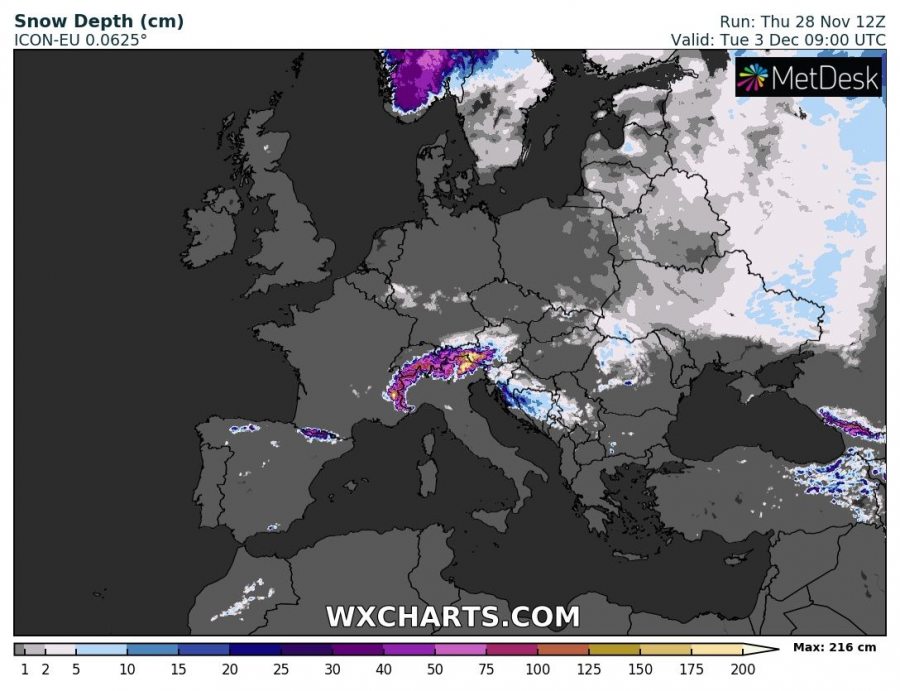