The extreme southeastern Europe, Greece in particular, is in for a week of persistent precipitation: snow at higher elevations, heavy rainfall at lower elevations. High-resolution models indicate locally up to 200 mm of precipitation, possibly more. We take a closer look.

This week’s weather pattern will be characterized by a series of cutoff lows ejecting from Atlantic, across western Europe into the Mediterranean, bringing unsettled and locally severe weather to the region. Central Mediterranean and Greece in particular will be affected by at least two deep cutoff upper lows with associated surface lows, which will bring persistent and locally excessive precipitation.

The first low – Wednesday and Thursday

The first low passes through the region on Wednesday, quickly moving across southern Greece into the Aegean sea and further northeastward into Bulgaria on Thursday. It will bring lots of precipitation into western Greece and later also into SW Turkey and NE Greece. Up to 70-100 mm of combined convective and orographic rainfall is likely along the W coast of Greece, some snow (10-20 cm) at higher elevations. Also some windy weather with this system, particularly at higher elevations on Crete and islands in the eastern Aegean region, where peak winds will likely exceed 100 km/h.

Some threat also for severe thunderstorms along the coastal area of W Peloponnese, as up to 500-800 J/kg CAPE builds up ahead fo the frontal boundary on Tuesday afternoon and combines with about 40-50 kt deep-layer shear. Any thunderstorm forming in these conditions will have a significant potential for torrential rainfall and tornadoes (up to 250-400 J/kg 0-3km CAPE!). 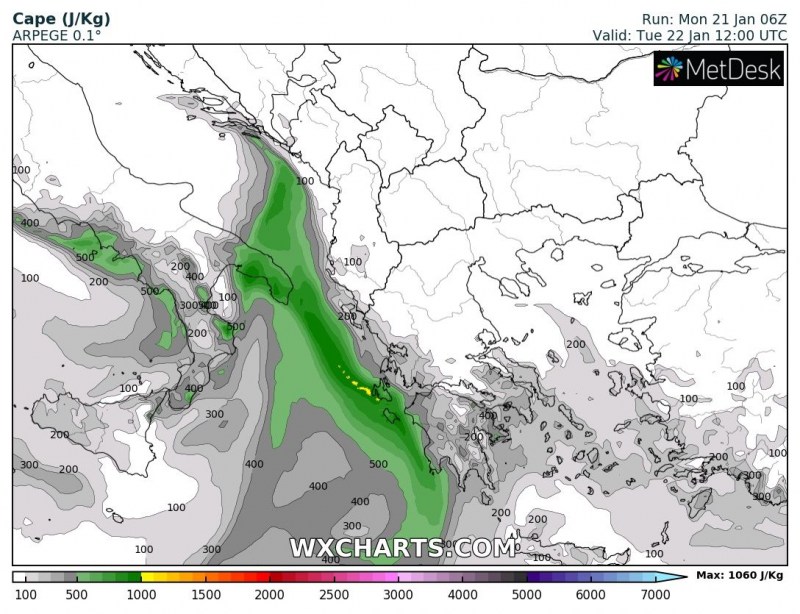 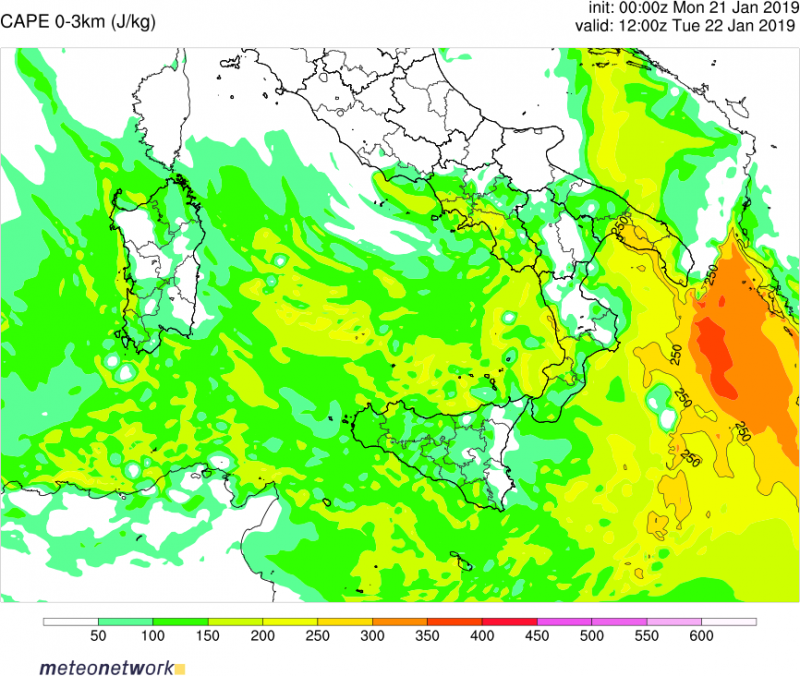 As the system moves into the Aegean late on Wednesday, again instability builds up ahead of the frontal boundary: up to 500-1000 J/kg CAPE will build up across central and eastern Aegean region, while even more instability, up to 800-1500 J/kg will build up along the coast of SW Turkey between Rhodes Island and Cyprus on Thursday. Good overlap with with 40-60 kt DLS and strong 30-40 kt surface backing southeasterlies (!!) provide a strongly sheared environment, ripe for severe thunderstorms, with enhanced threat for tornadoes. Also expect locally up to 100-150 mm of rainfall along the coast of SW Turkey on Thursday, rapidly transitioning into snow at higher elevations inland. 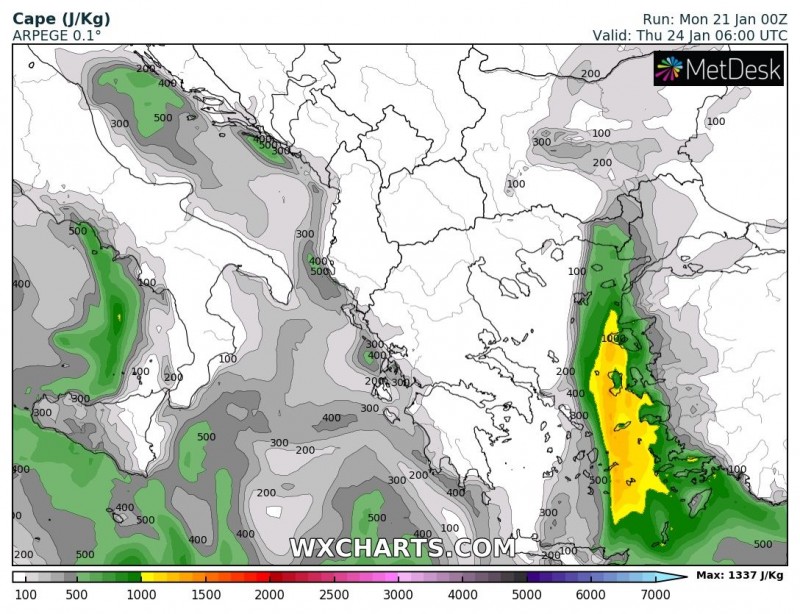 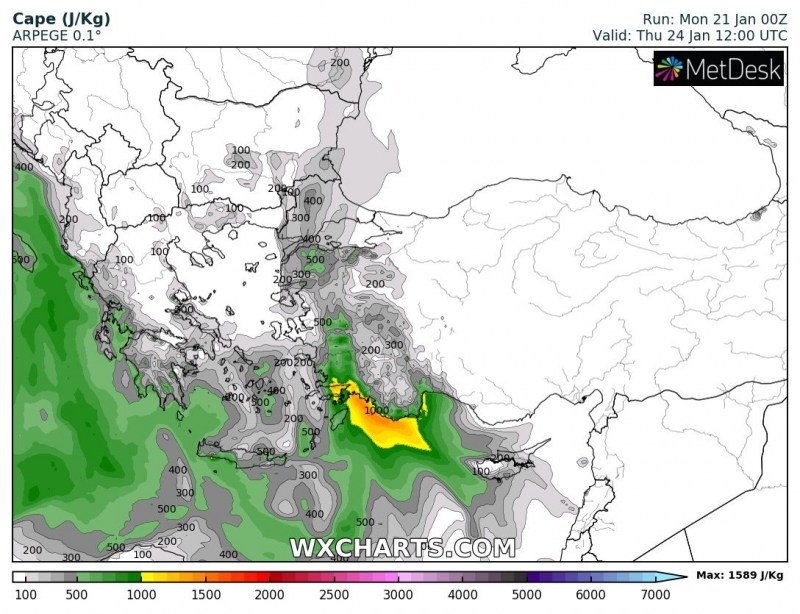 The second low – Friday and Saturday

A second cutoff low passes along the generally same track two days later. Current model guidance suggest a deep surface low with central MSLP down to below 990 mbar. It will bring another round of torrential rainfall (and excessive snowfall at high elevations) to western Greece on Friday and Saturday. Another round of strong to severe winds is likely for Crete and the Aegean. We will be taking a closer look at this system later in the week. 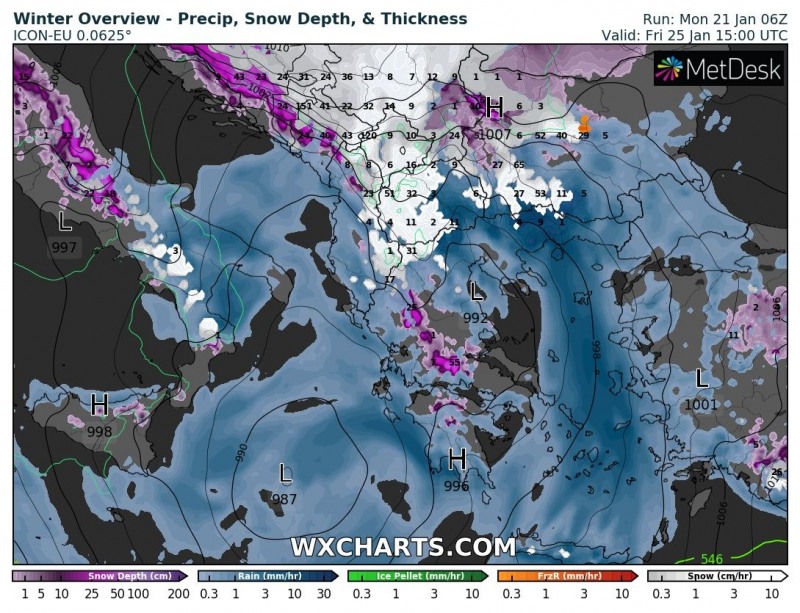 Major rainfall totals are expected along the coast of western Greece, in northeastern Greece, the eastern Aegean and the western and southwestern coast of Turkey. Up to 100-150 mm of rainfall (or corresponding snowfall at high elevations) is expected until the weekend. Locally 200+ mm may accumulate. 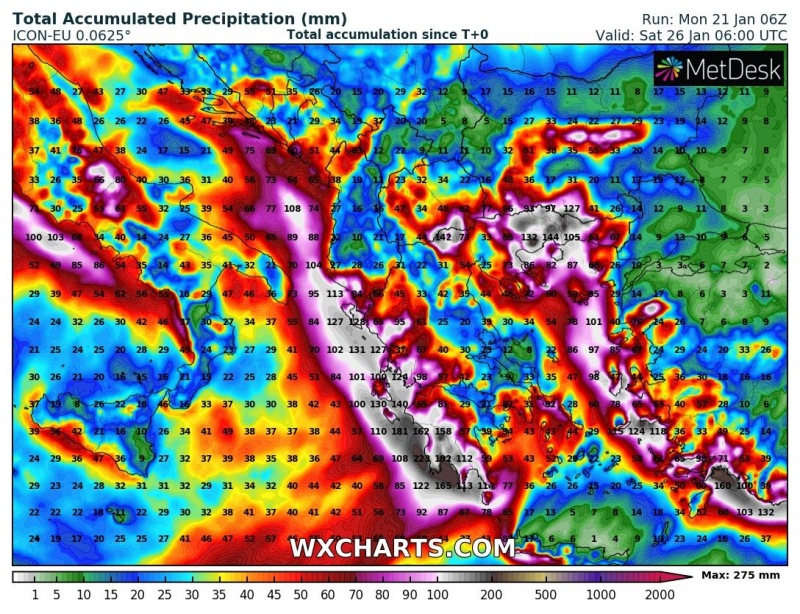 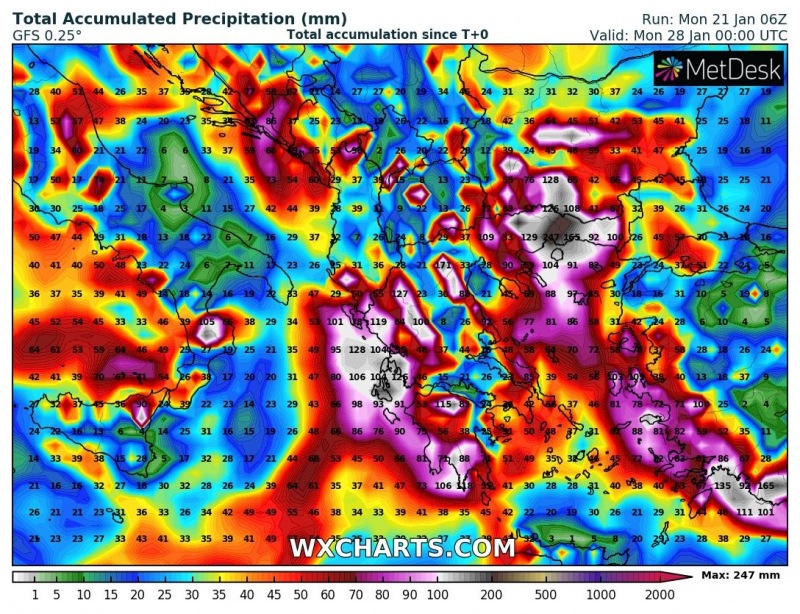