Related to the new Arctic cold outbreak across eastern half of Europe, a dangerous setup is shaping up for parts of central Scandinavia and the Baltic region. A deep cyclone with intense blizzard conditions will develop over Finland with severe to extremely severe winds present over the region, resulting in extremely high sea waves across the Gulf of Bothnia and the Baltic sea. Once the system pushes towards the eastern Estonia and western Russia, significant sea-effect snowfall develops along the coastal areas of NE Poland, Kaliningrad, western Lithuania and Latvia.

Details on the developing pattern and the Arctic cold outbreak:

Associated with the deep upper low, a powerful deep cyclone develops over the Gulf of Bothnia by Tuesday morning and moves into the southern Finland and Estonia while deepening below 980 mbar overnight to Wednesday. 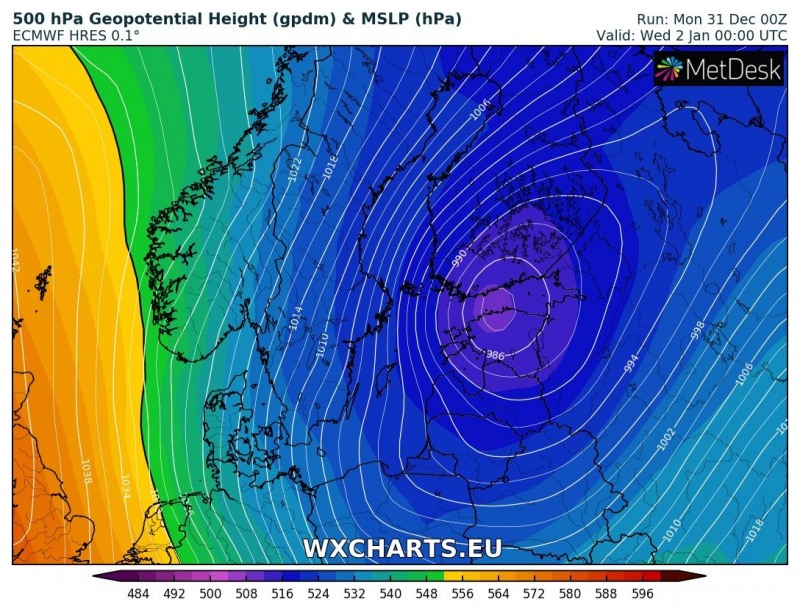 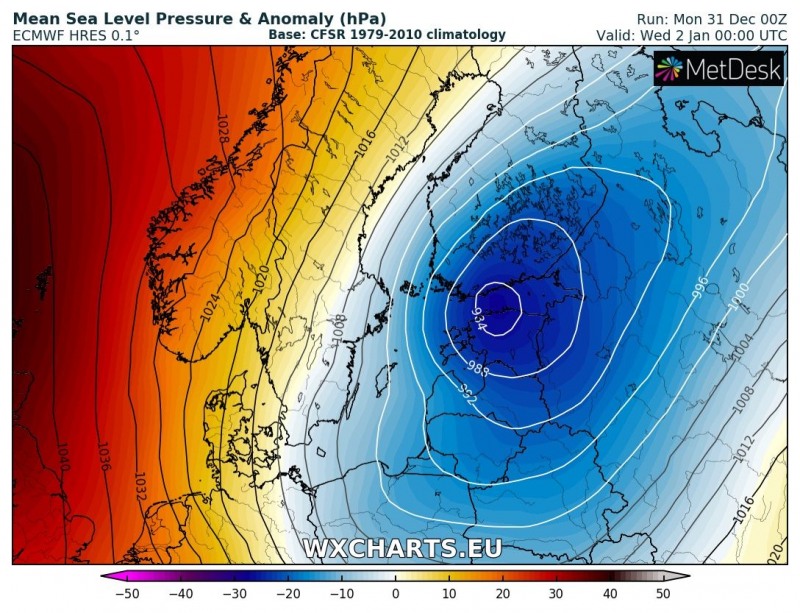 A very strong pressure and temperature gradient between the strong upper ridge / high pressure system over N Atlantic and the deep trough / low over the E Scandinavia will result in a very significant wind field, transporting very cold airmass meridionally from the Arctic region towards the south. 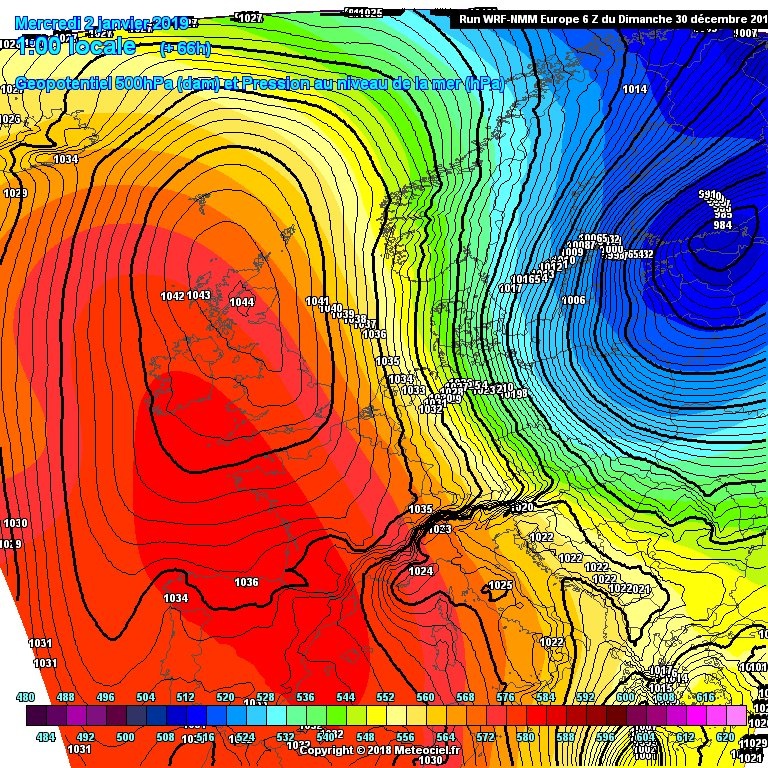 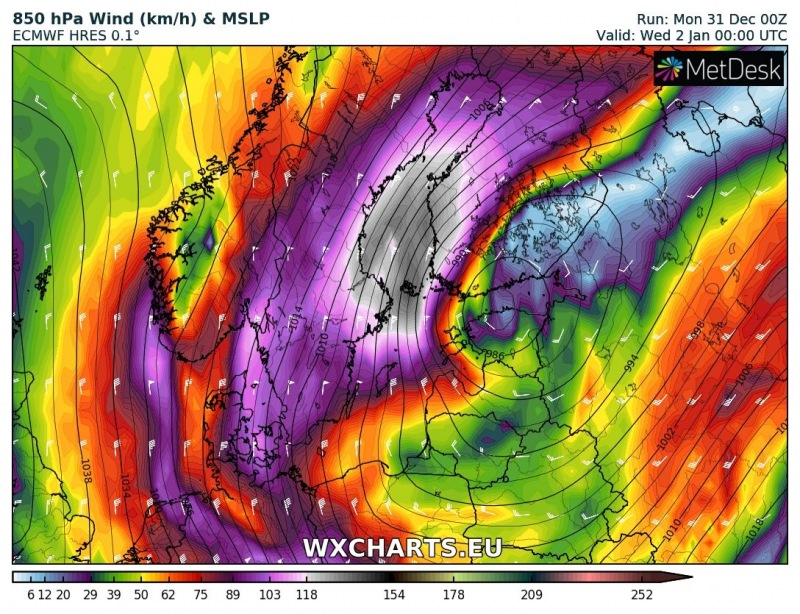 Below is a 3-hour sequence of the frontal system moving across the Baltic region – it starts on January 1st morning with a cold front rapidly moving from the Baltic sea into the Estonia, Lithuania and Latvia with precipitation turning to snow along the front. Very cold airmass pushes in its wake across the southern Finland with a deep cyclone (below 980 mbar) moving across the Gulf of Finland towards east. With the strengthening high pressure system towards the N Atlantic, a strong pressure gradient develops severe winds and blizzard conditions. Additionally, a lot of fresh snow is expected, associated with the occluded front moving across south-central Finland from the mid afternoon hours until the early Wednesday hours. Whiteout conditions and high snow drifts are expected! 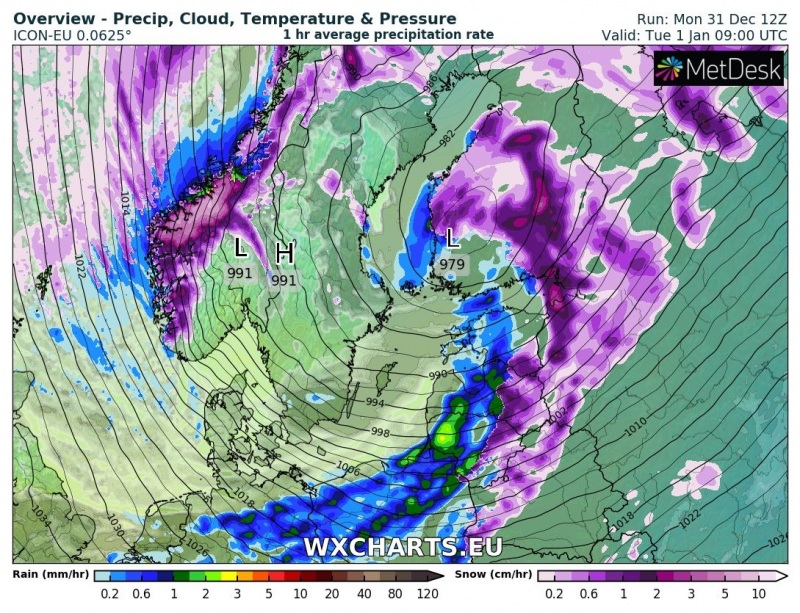 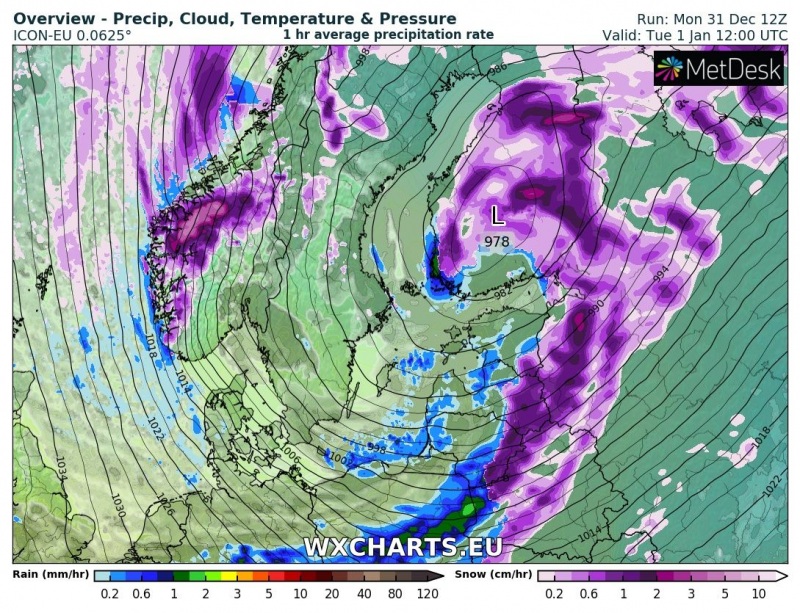 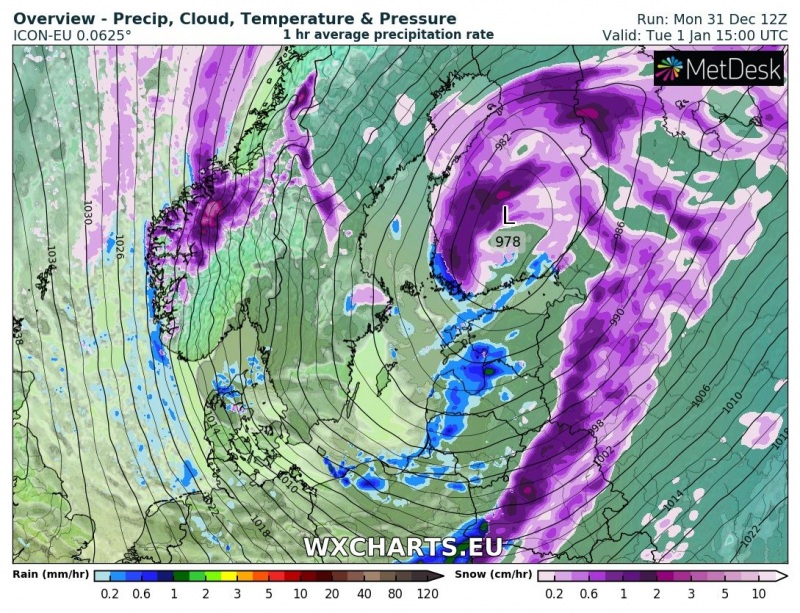 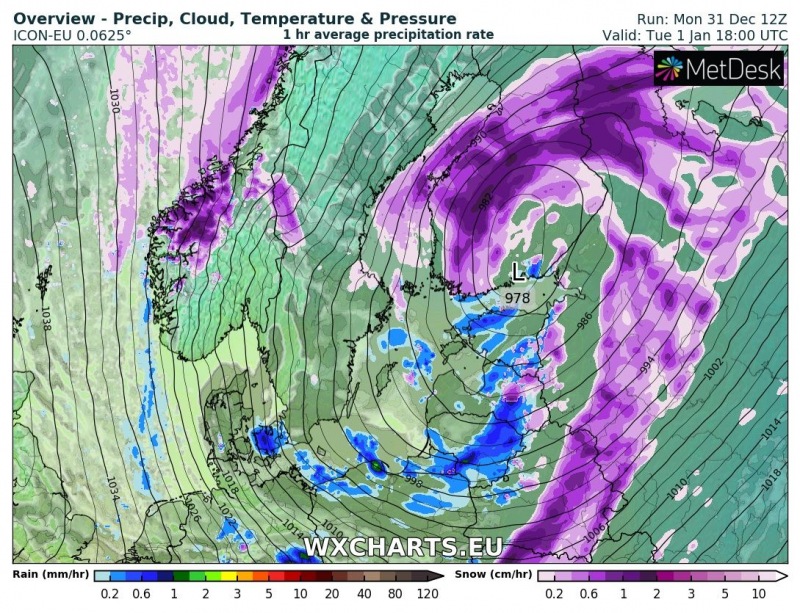 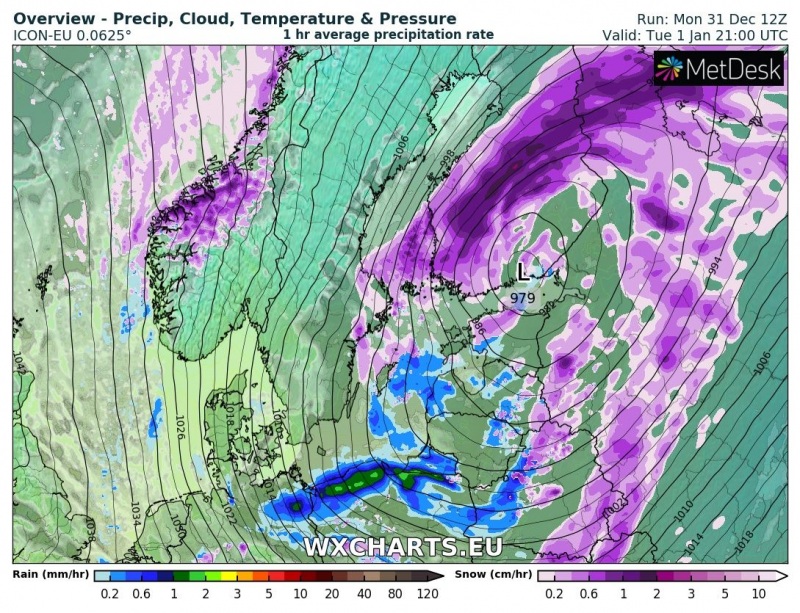 During the second half of the night to Wednesday, January 2nd, significant sea-effect snowfall develops along the coastal areas of the western Lithuania and Latvia and Estonia, as well as Aland islands. Through the Wednesday morning hours, the effect spreads further south towards Kaliningrad as well. Intense snowfall with blizzard conditions should remain across the NE Estonia, extreme SE Finland and the gulf of Finland near the centre of the deep low exiting into western Russia. 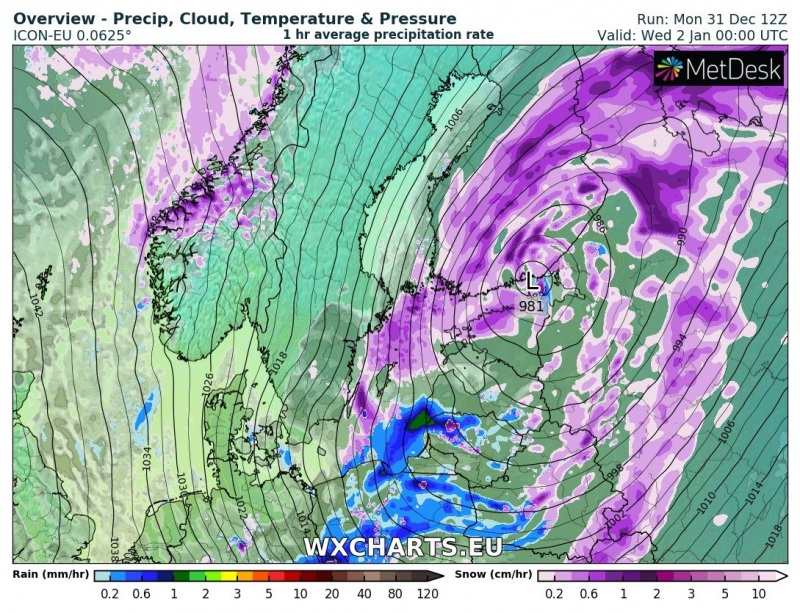 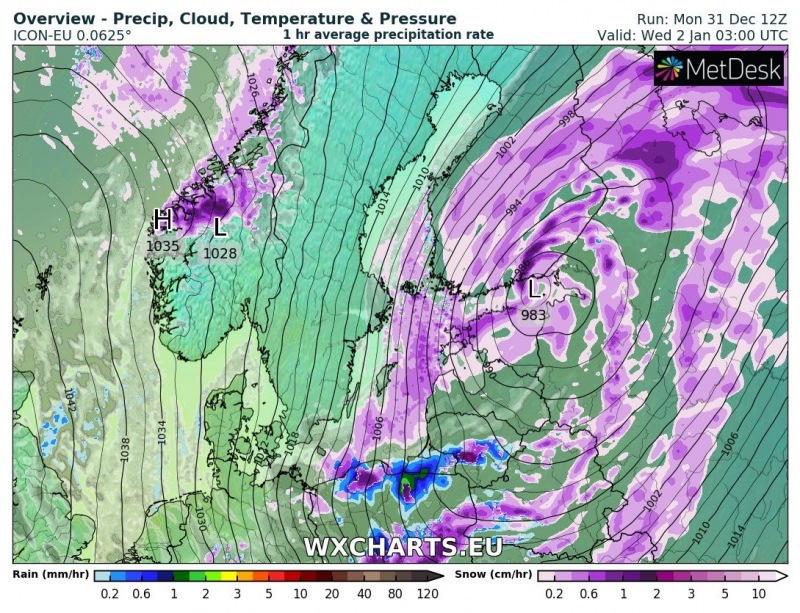 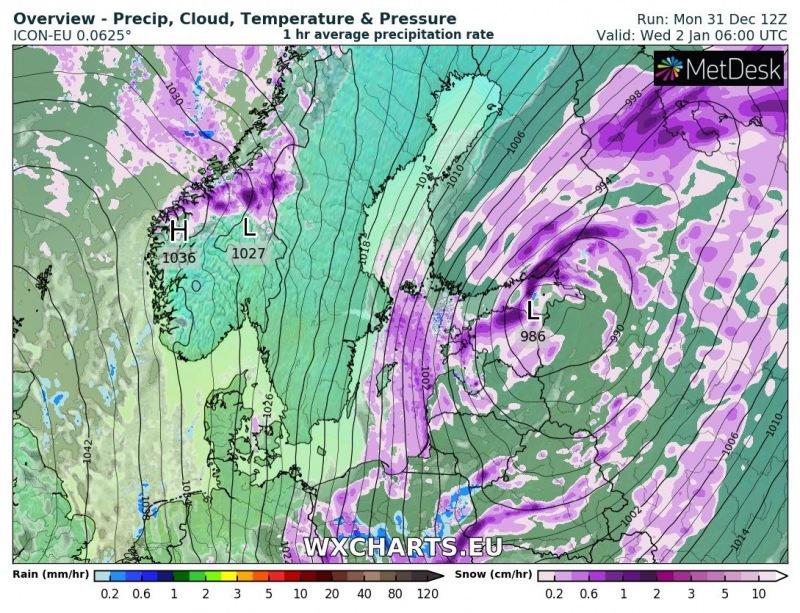 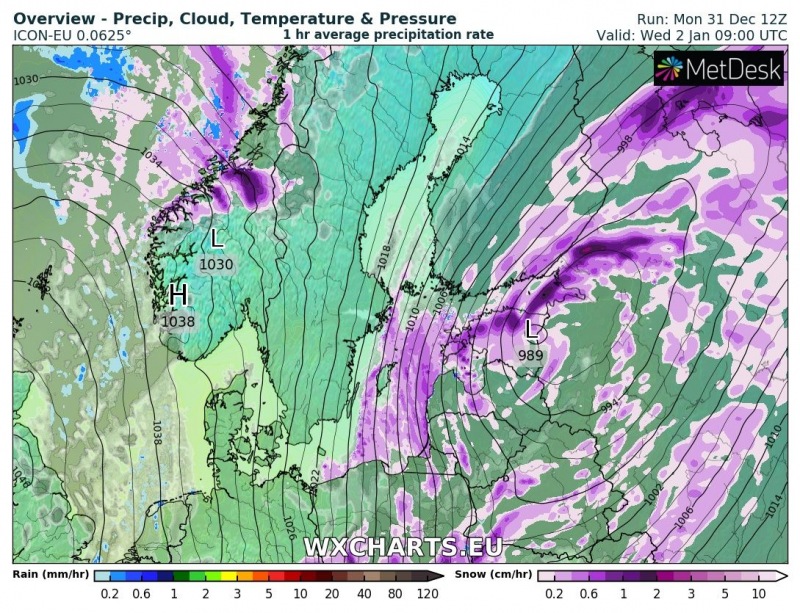 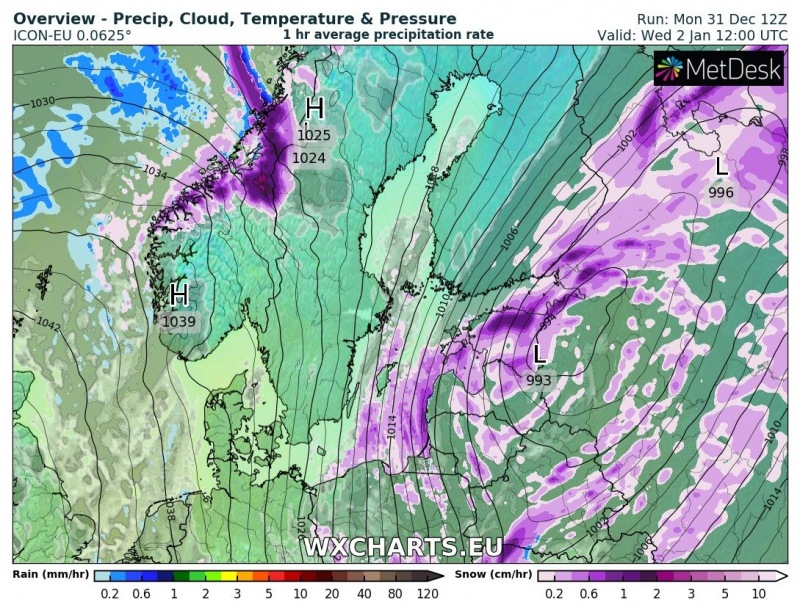 The total snowfall per GFS, ARPEGE and ICON-EU models – 20-40 cm will be possible across parts of the south-central Finland. Notice also a lot of fresh snow over western Norway which will be under the effect of persisting strong NNW orographic flow and therefore excessive snowfall – it is likely mountainous areas there will receive 50-100 cm of fresh snow. 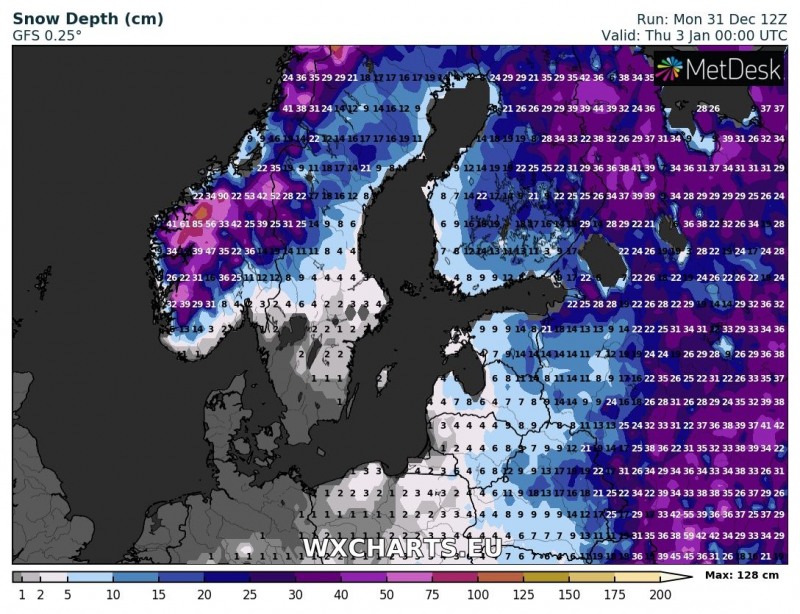 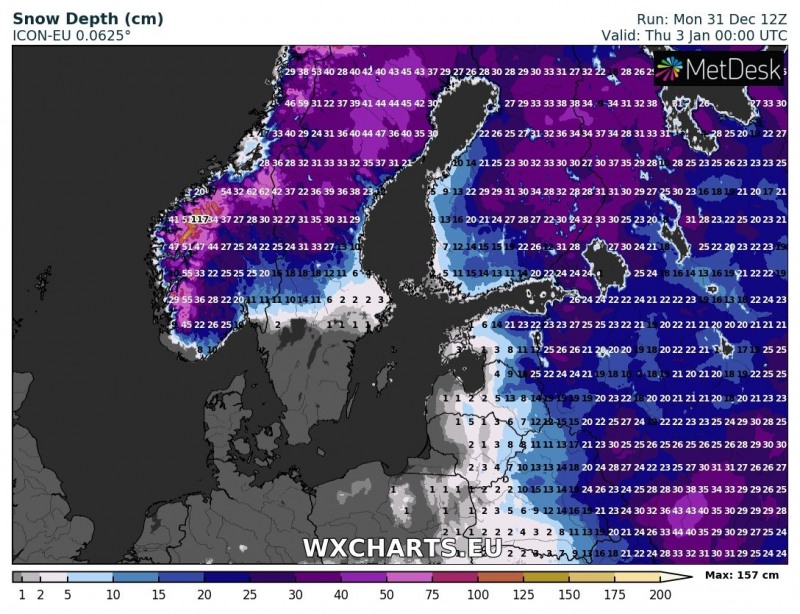 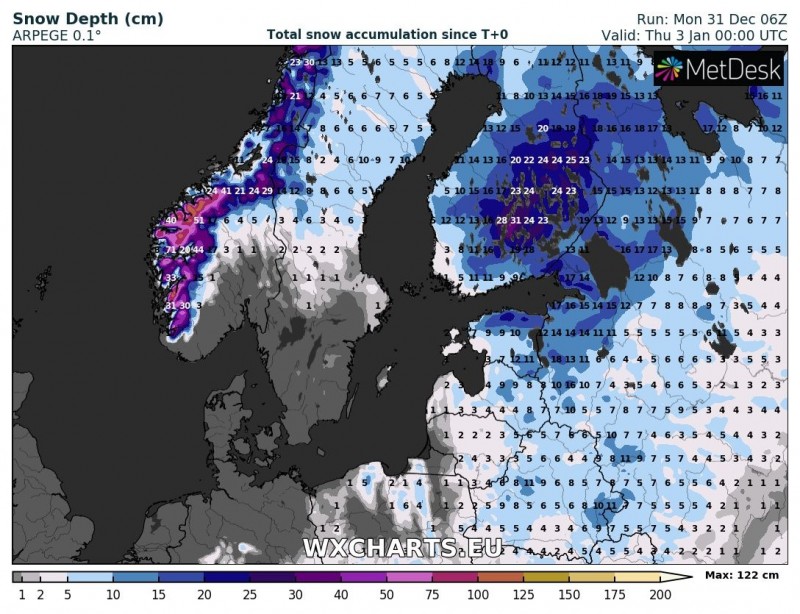 Wind gusts across the Bothia gulf and towards the Aland islands during the night from Jan 1st to 2nd – peak gusts could locally reach extremely severe strength, possibly exceeding 130 km/h! Maps are based on ARPEGE and ICON-EU models: 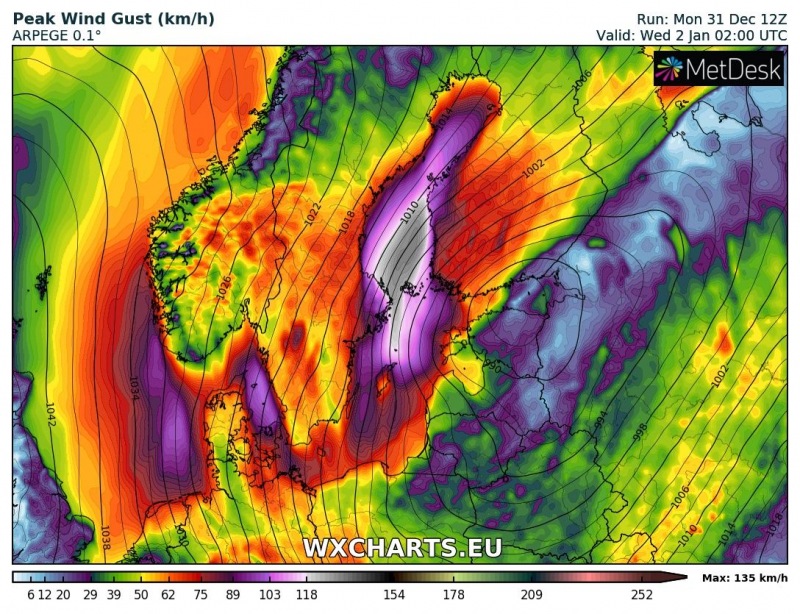 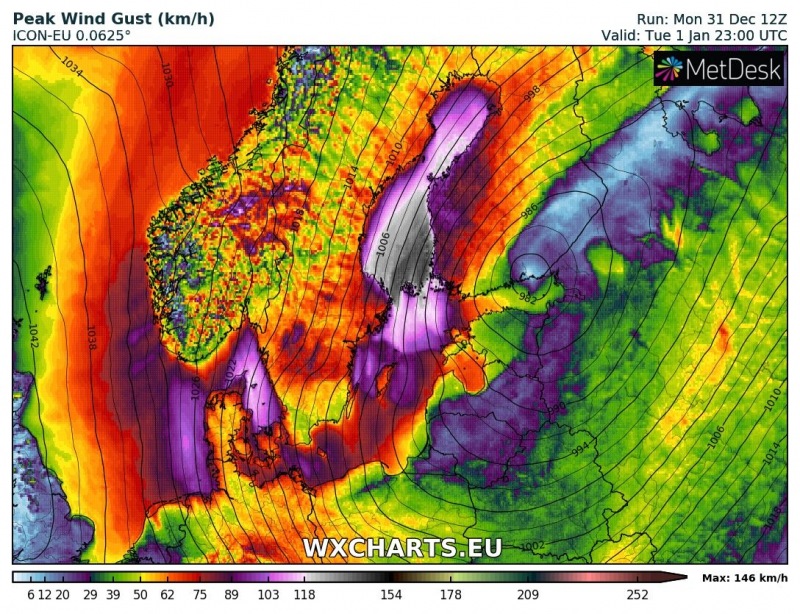 The Finnish meteorological office has issued the highest, red warning for severe winds and high waves along the coast. Some high resolution models are hinting at chances for 6-8 m sea wave heights across the Aland islands: 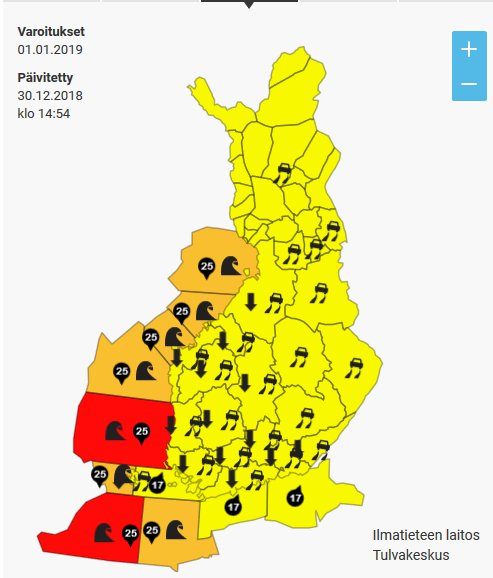 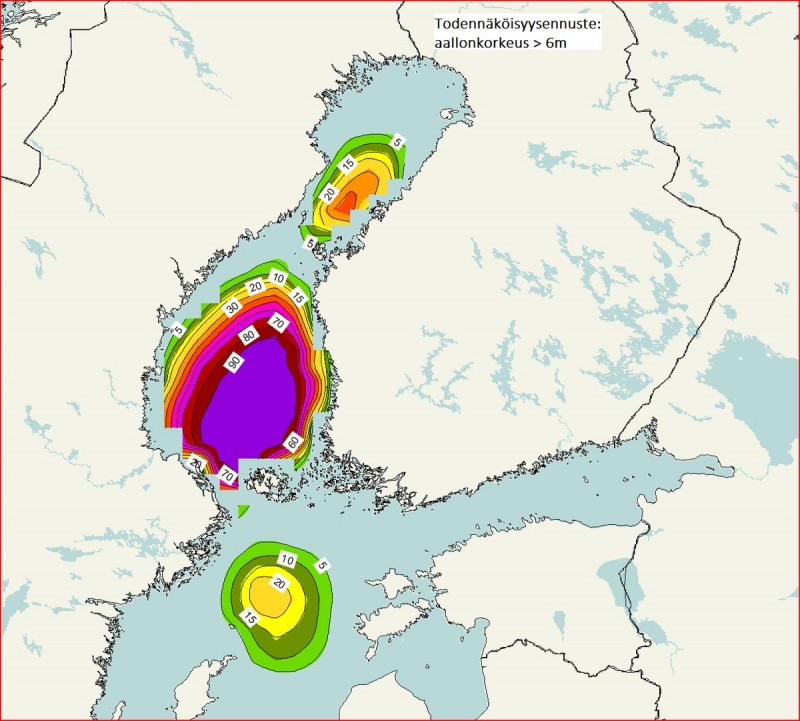 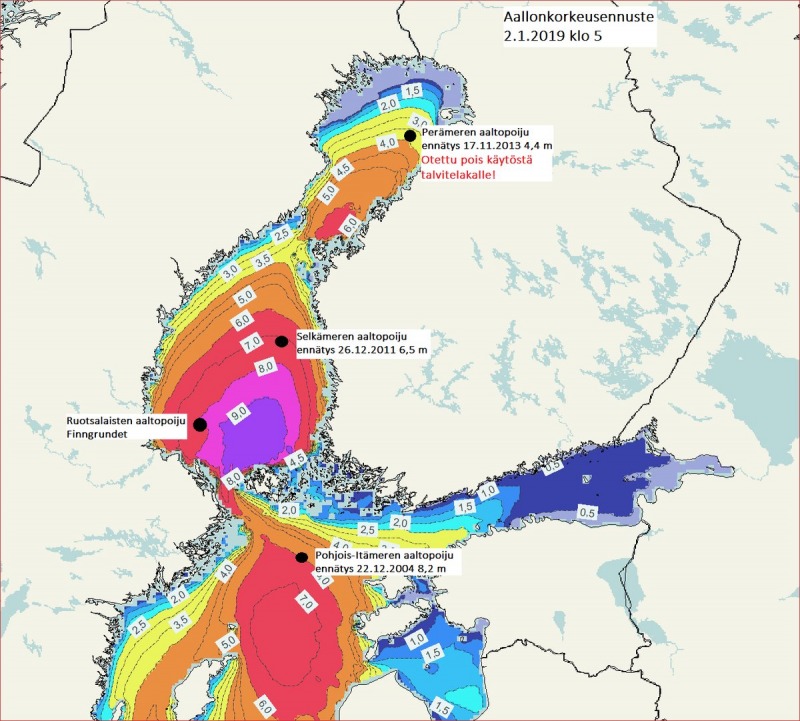