What could the interesting date – Friday, the 13th – bring weatherwise? Friday brings a potentially strong winter storm across parts of the Alps and WNW Balkans, severe storms over the Mediterranean sea and excessive orographic rainfall along the mountain ranges. Related to the main long-wave upper-trough over western Europe, through axis pushes east across central Europe and cuts off over the Alps into the Mediterranean. At the surface, a deep secondary cyclone develops over north Italy (Genoa low) and drifts across the Adriatic sea towards Greece.Blizzard conditions are likely to develop over the NW Balkans.

The pattern supporting the weather evolution this Friday 13th has a large deep trough over western Europe with its axis becoming negatively tilted. Trough expands into central Europe and soon cuts off its southern edge over the Alps. An upper low then rapidly ejects towards SE into the Mediterranean and already reaches Greece on Saturday. At the surface, a very large cyclone which is resulting in severe windstorm across the British Isles and France spreads SE where secondary cyclogenesis forms in the lee of the Alps. A deep Genoa low develops and drifts SE across the Adriatic and Ionian sea towards Greece. 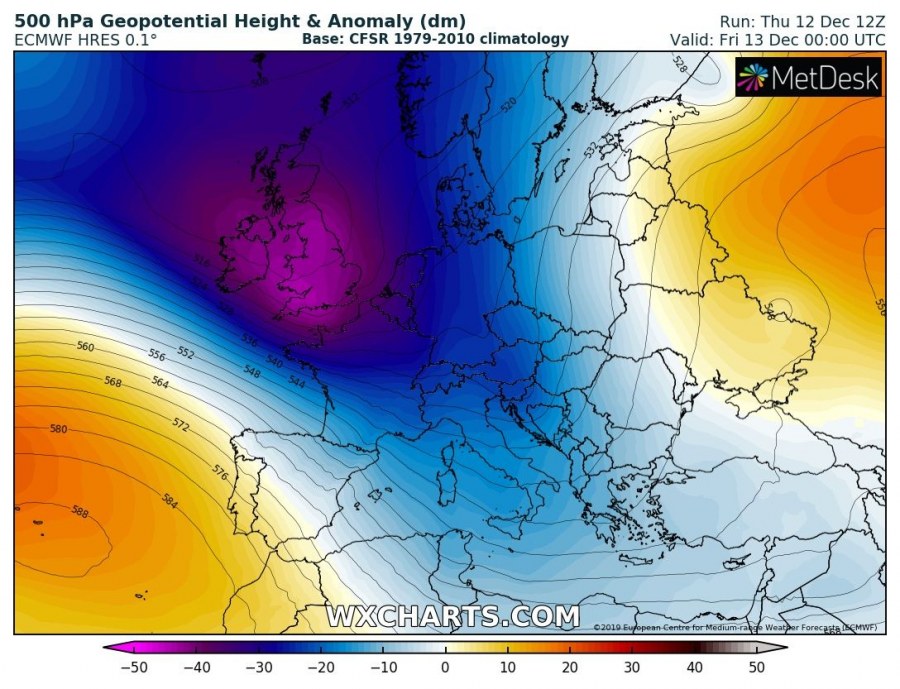 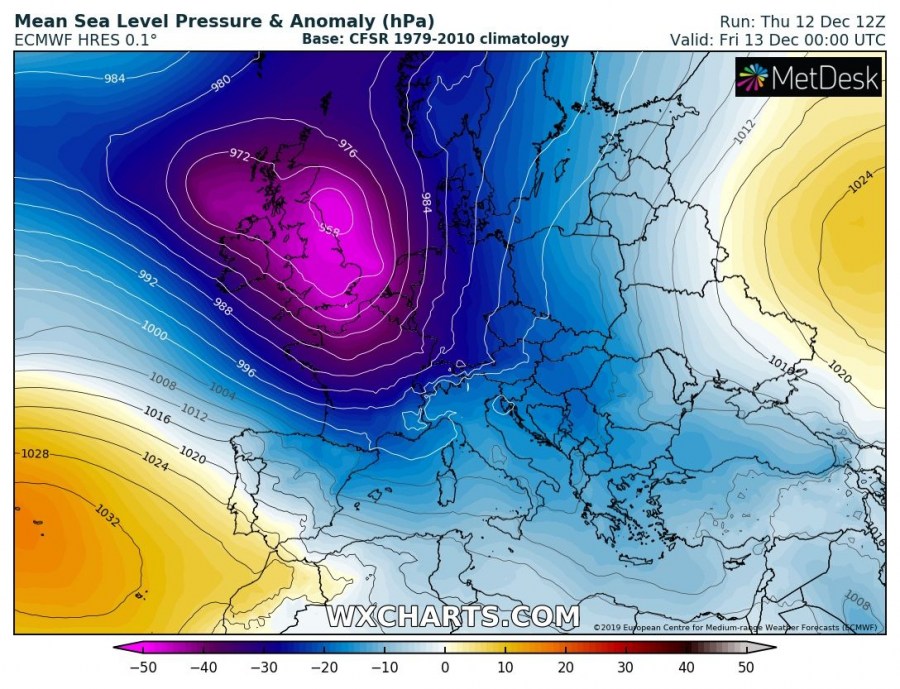 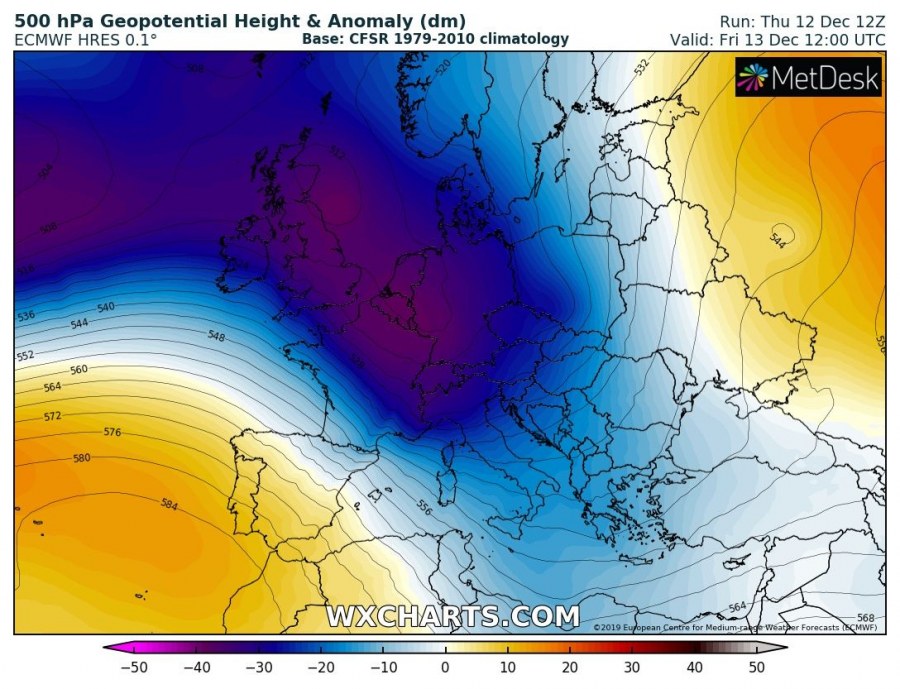 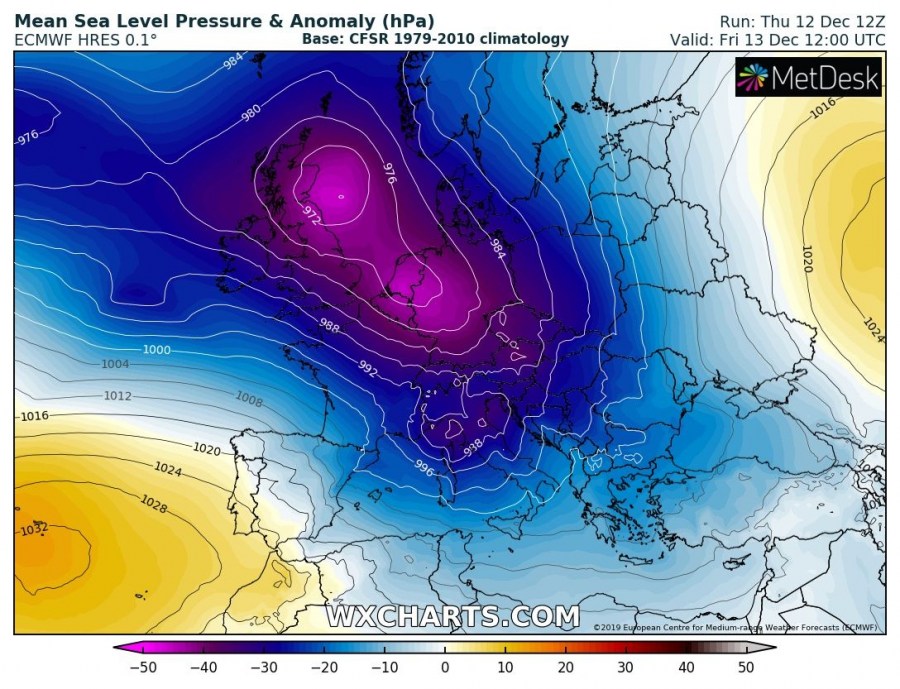 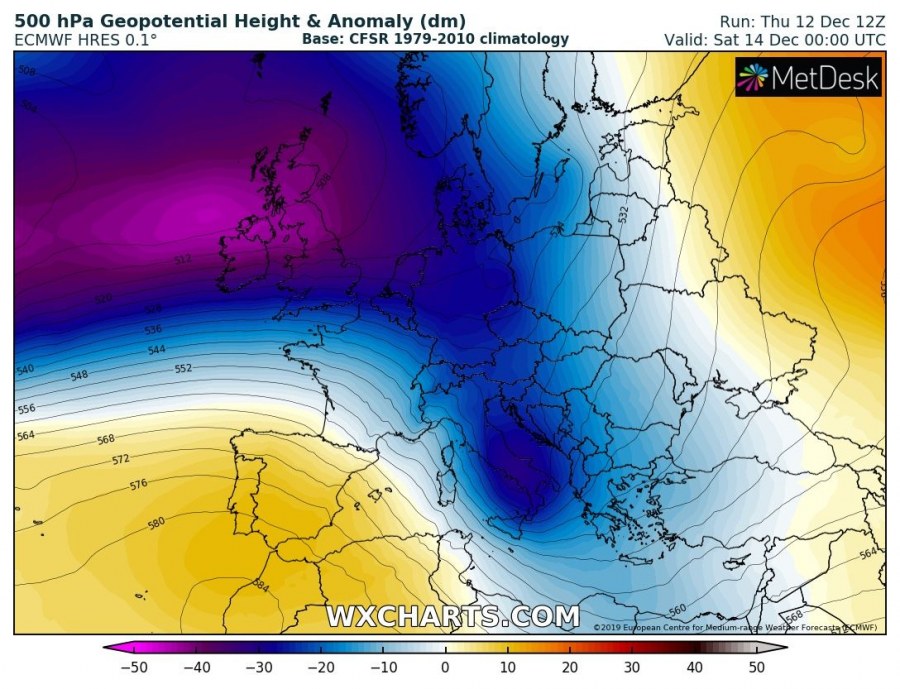 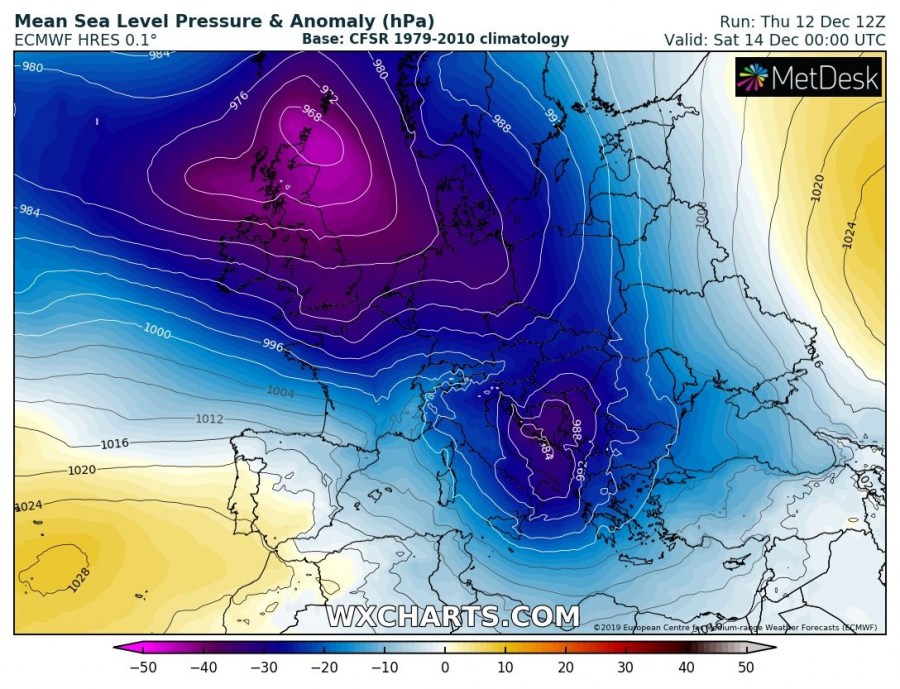 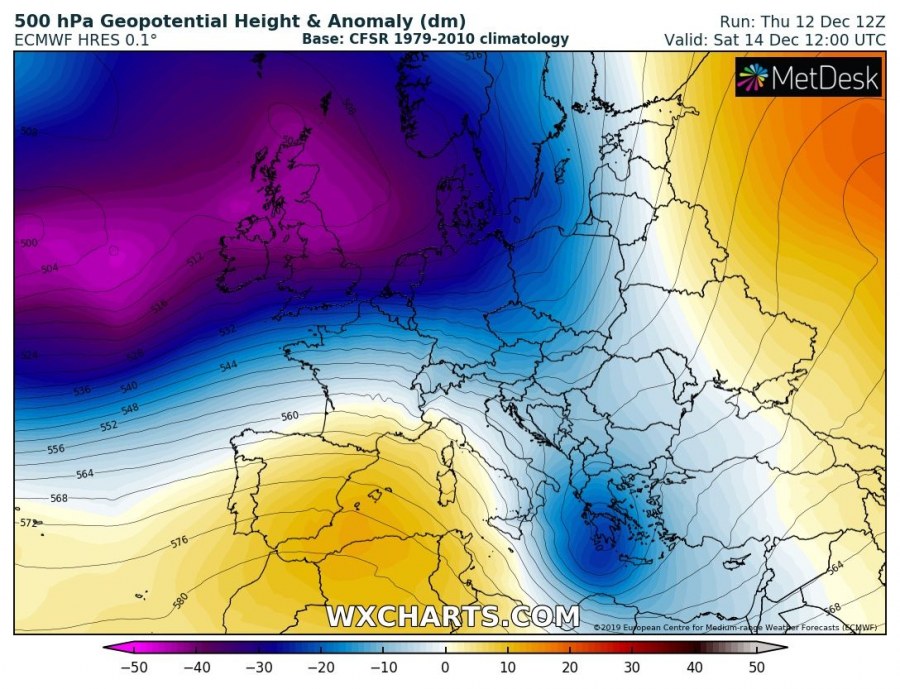 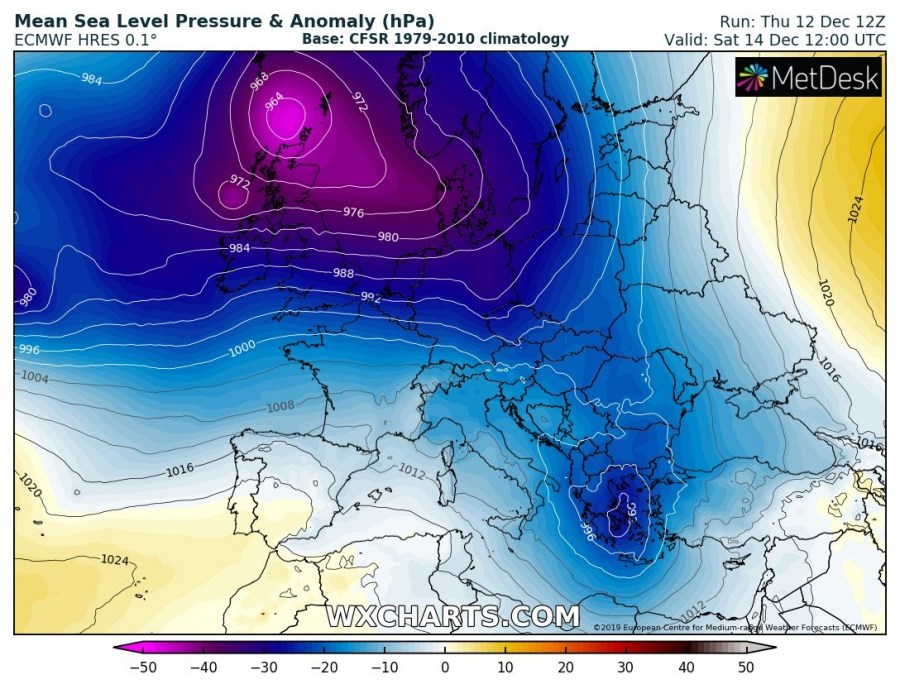 The frontal system associated with a deepening cyclone starts over the western Alps on Friday morning, developing a very intense snowfall as strong WNW flow establishes. Through midday, cyclone significantly deepens over North Italy and precipitation intensify with the stronger warm airmass advection into the Apennines and towards the N Adriatic region. On the rear cooler side of the cyclone, snowfall spreads across NW Italian plains. Towards the evening hours, cyclone drifts into the central Adriatic sea and intense precipitation continues spreading east from the N Adriatic into W Slovenia and NW Croatia. Some storms are also possible, while the main feature of interest is the high potential for a few hours of intense snowfall along with the Dynaric mountain range which could result in 20-30 cm in about a 6-hour period locally. Strengthening (Bora) winds will support blizzard conditions and building snow drifts there as well. Further south along the cold front, storms are also likely across the eastern Tyrrhenian sea. Through midnight, heavy snowfall with blizzard conditions gradually diminishes over Slovenia but continues over the NW Croatia (Gorski Kotar region) in the wake of the cyclone, also due to orographic snowfall with the northeasterly flow onto the NW Dynarides. Further south near the cyclone’s center located over the central Adriatic sea, intense storms and excessive rainfall are likely. The frontal system should quite rapidly move towards the Ionian sea by Saturday morning and support additional severe storms along the cold front spreading into western Greece. Flash floods are locally possible. 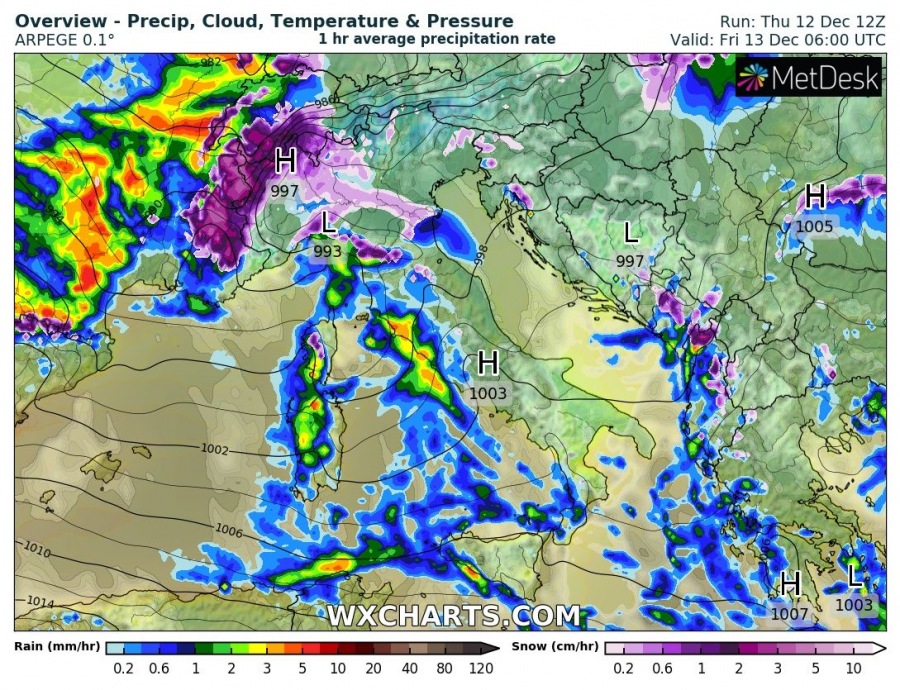 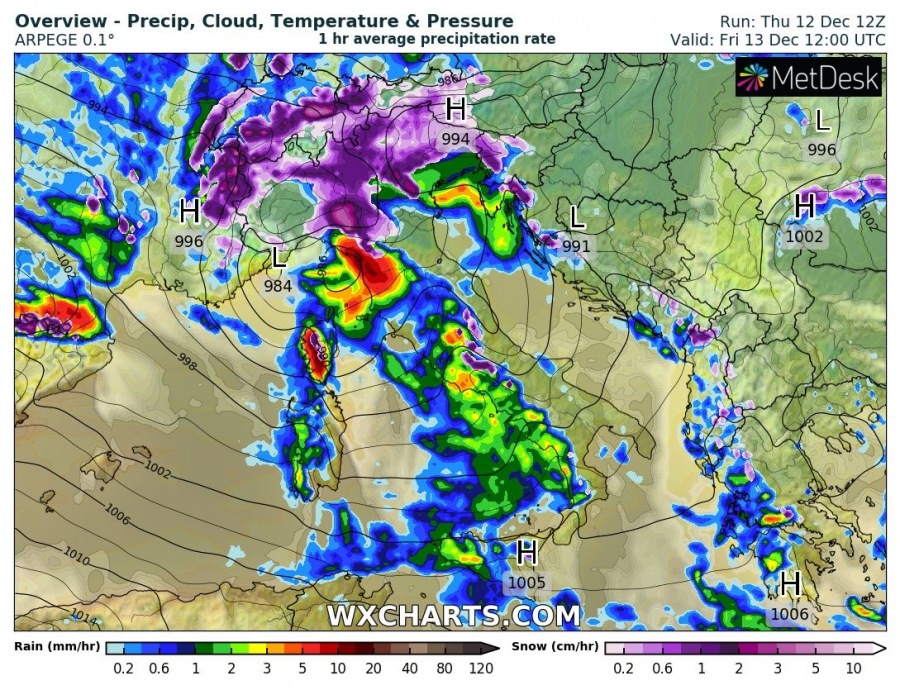 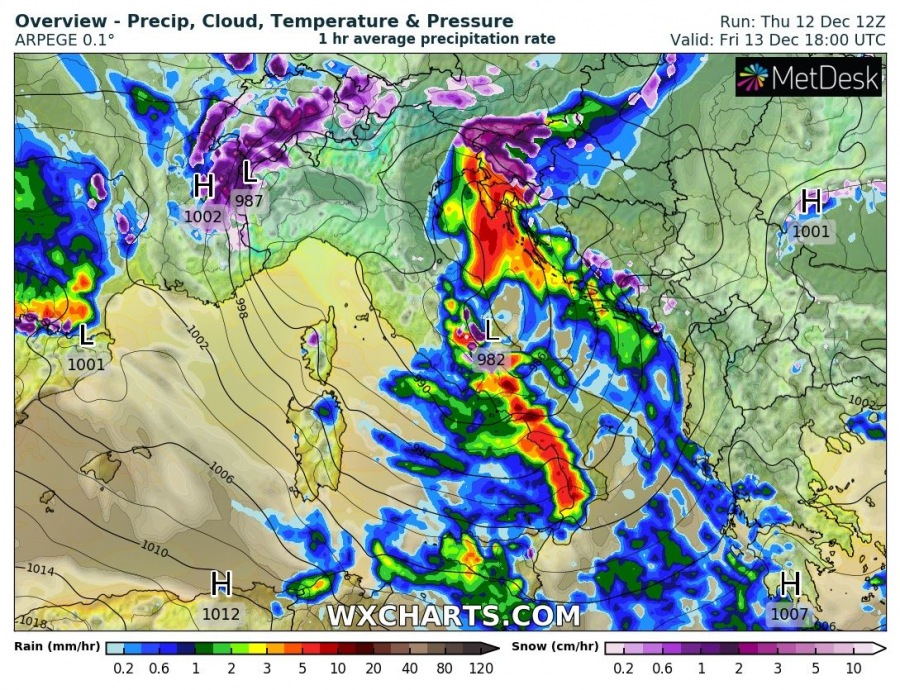 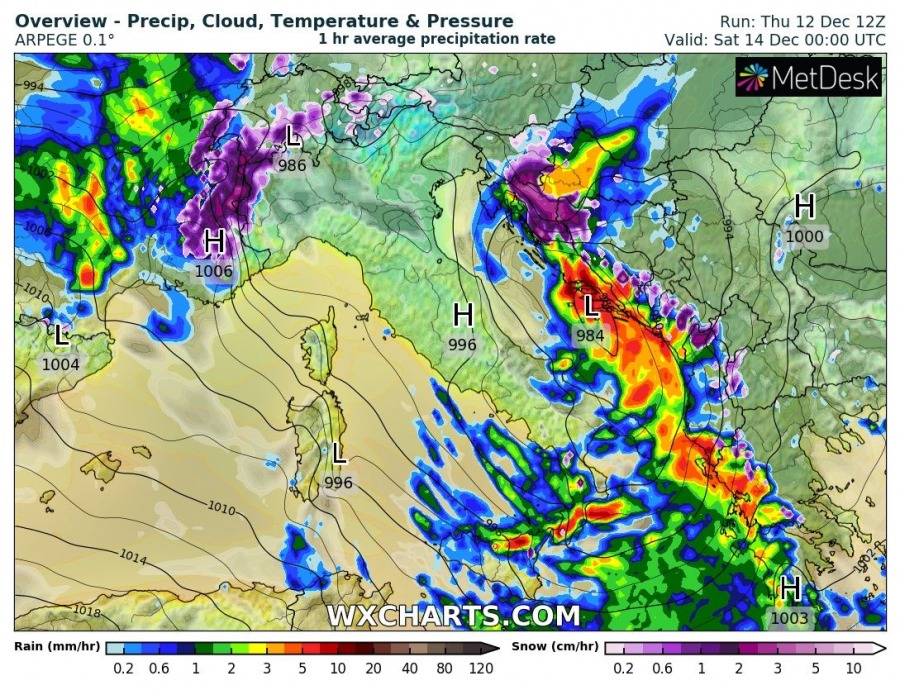 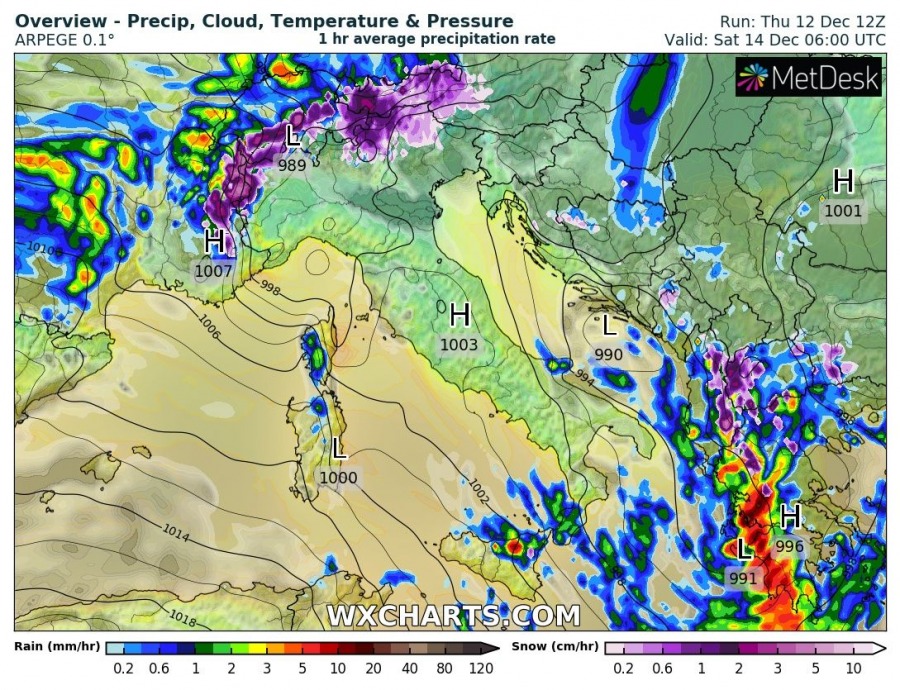 Very cold upper/mid-levels should also strongly increase temperature gradient across the Mediterranean sea, therefore resulting in instability across Tyrrhenian, Adriatic and Ionian seas. CAPE could locally build up to near 700-1000 J/kg, which will support organized convective storms. Potential exists for a few severe storms to develop along the eastern coast of the Adriatic sea, Ionian sea and around Greece. Convective storms should additionally enhance flash floods threat due to torrential rainfall at times. 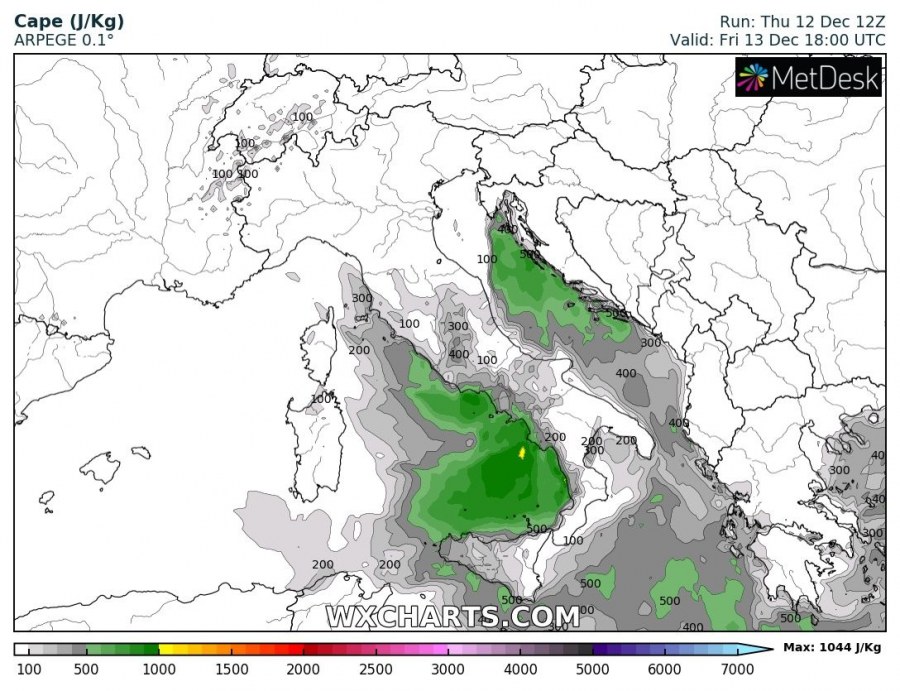 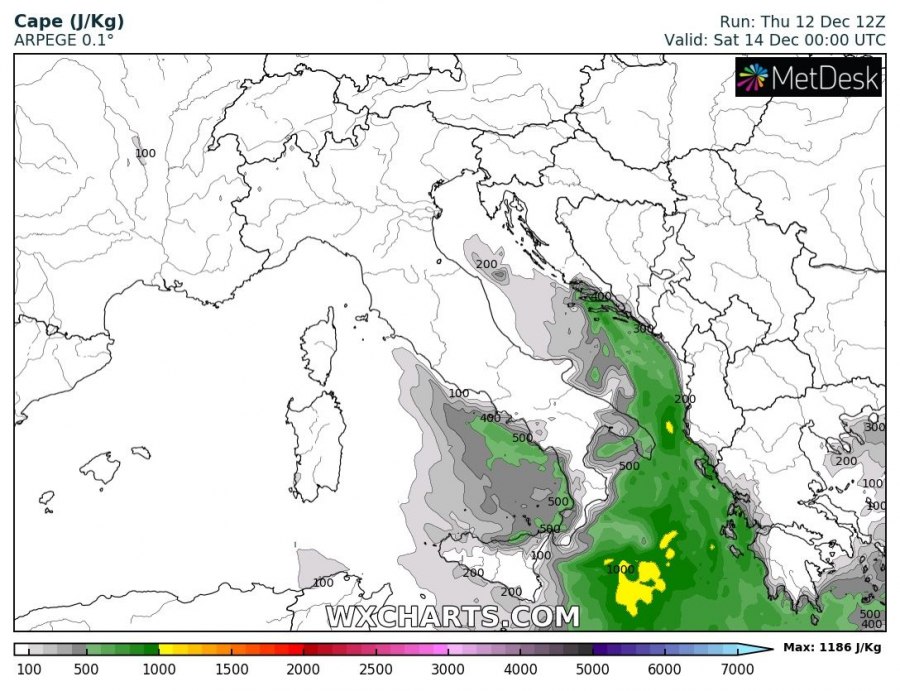 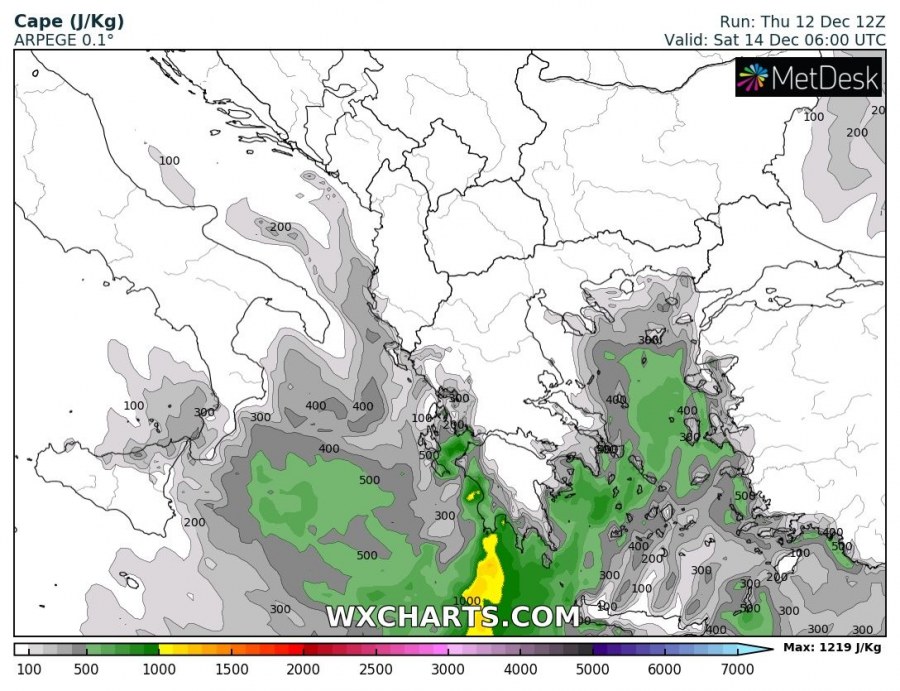 Excessive rainfall should locally establish, mainly where the strongest orographic precipitation will develop – e.g. Pyrenees due to strong northerly flow in the wake of the whole system, western slopes of Dynaric mountain range, southern Apennines and western Greece. These areas should likely receive 100-150 mm of rain, locally even more. Flash floods will be enhanced as some areas will experience convective torrential rainfall as well. 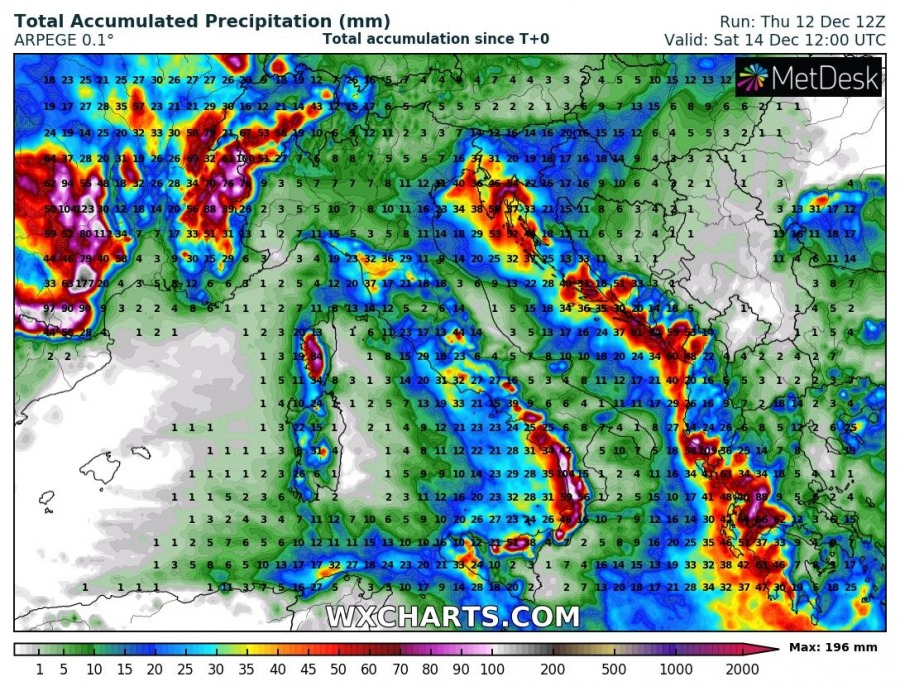 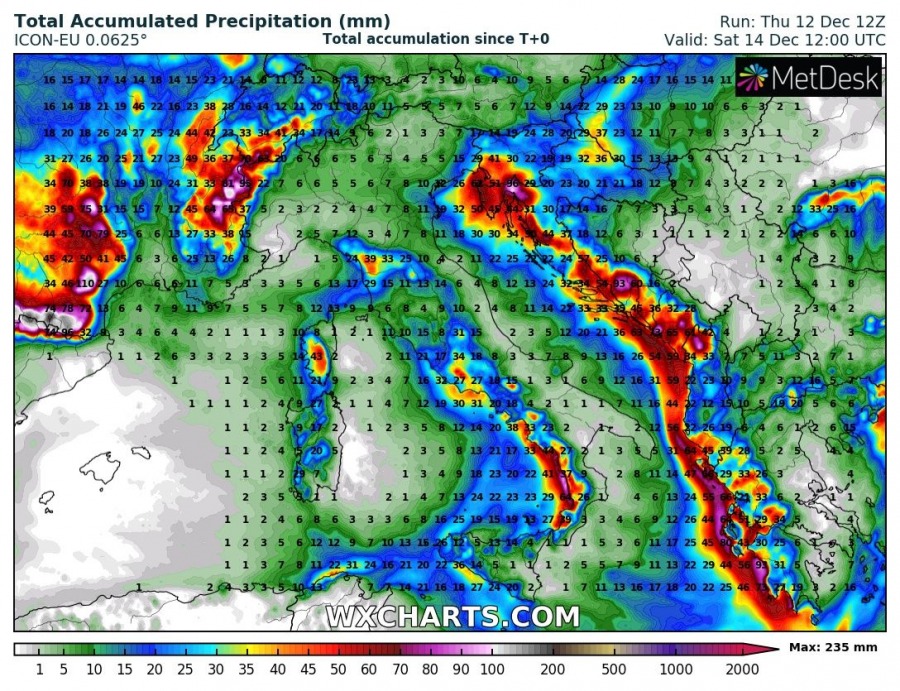 Quite a lot of snow is expected across the WNW Alps where strong northwesterly jet advects a lot of moisture and results in persistent orographic heavy snowfall, likely result in 70-100 cm of fresh snow until Saturday. When cyclone deepens over north Italy and precipitation intensifies on its front side (warm sector), a combination of still quite low temperatures in the lowest levels develop a heavy snowfall event along the Dynaric mountain range across W Slovenia and NW Croatia. Locally, 25-40 cm seems quite possible to accumulate until late Friday night. Some snow is also expected across NW Italy and W Balkans, but only a small amount of snow should accumulate. 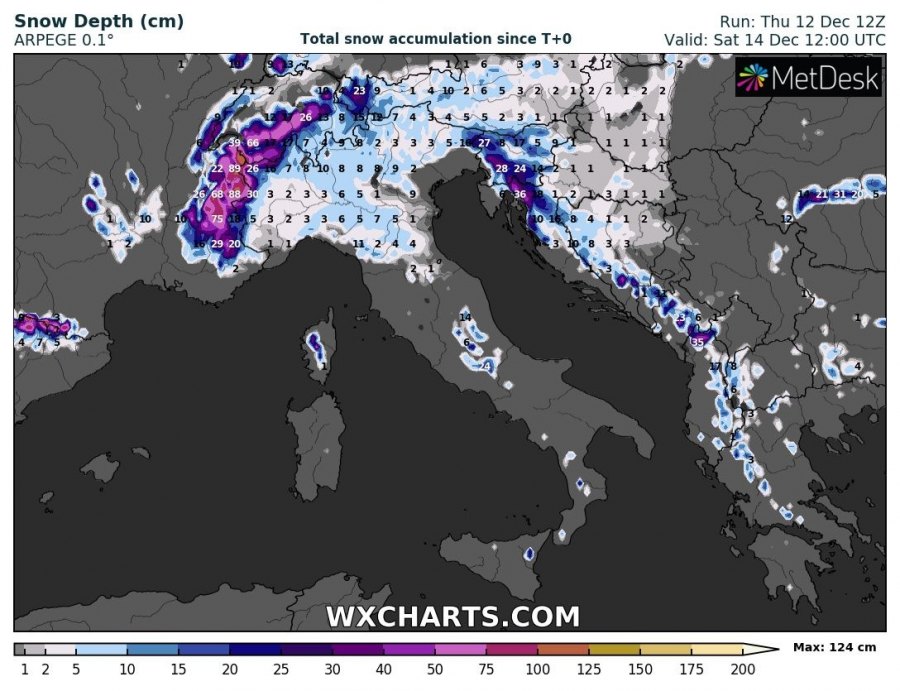 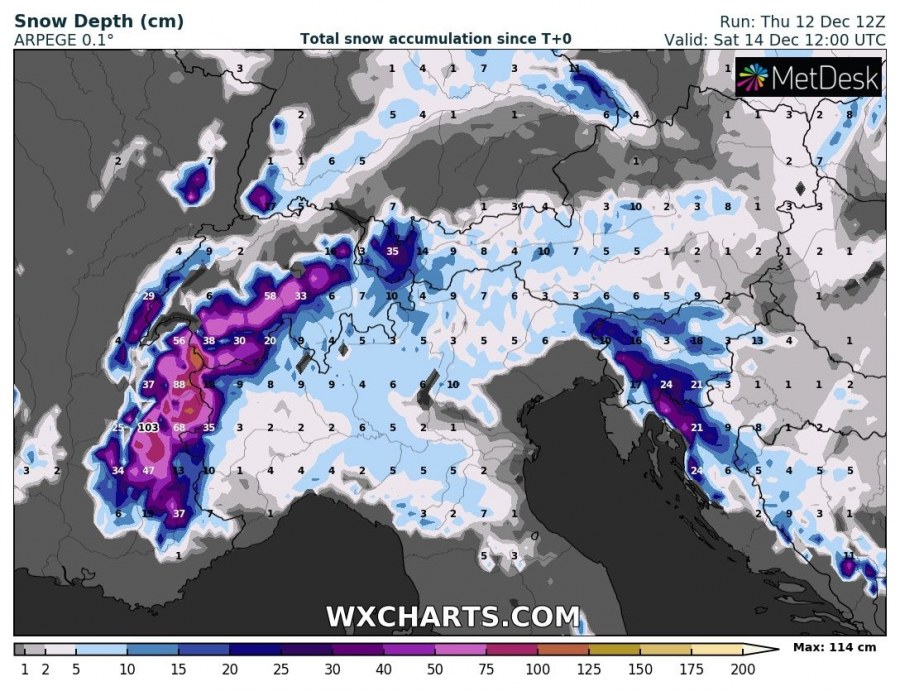 Strong pressure gradient between a deep cyclone across the Adriatic sea and the strengthening ridge over the SW Europe should also develop extensive wind field. A broad area of severe to locally extremely severe winds (especially across the higher terrain over Corsica, Sardinia, S Italy) is expected, resulting in gusts up to 100-130 km/h. Higher elevations should experience violent winds, possibly even in excess of 150-200 km/h! Refer to the ICON-EU model forecast for details. 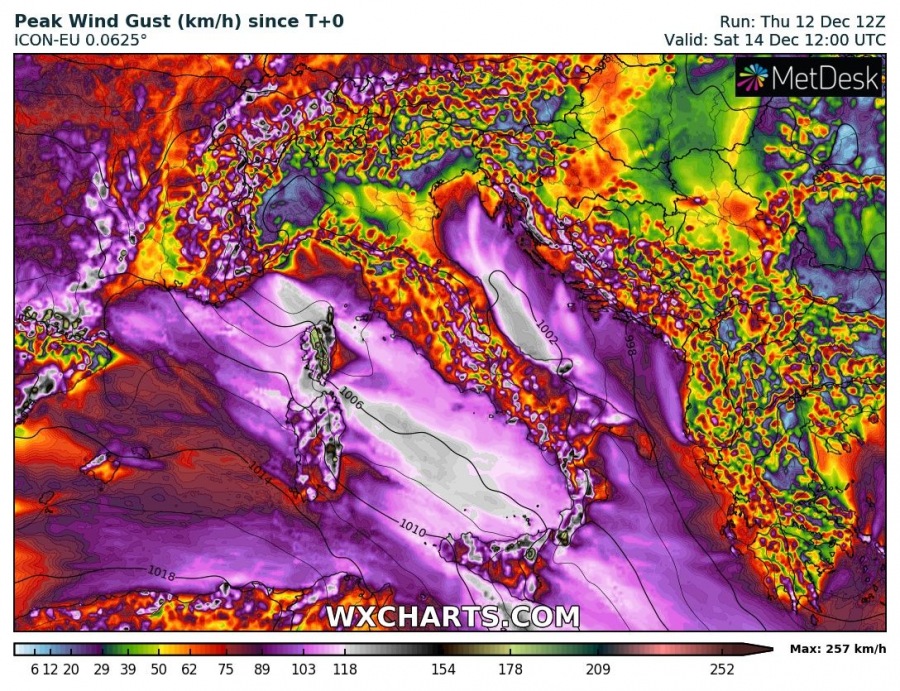 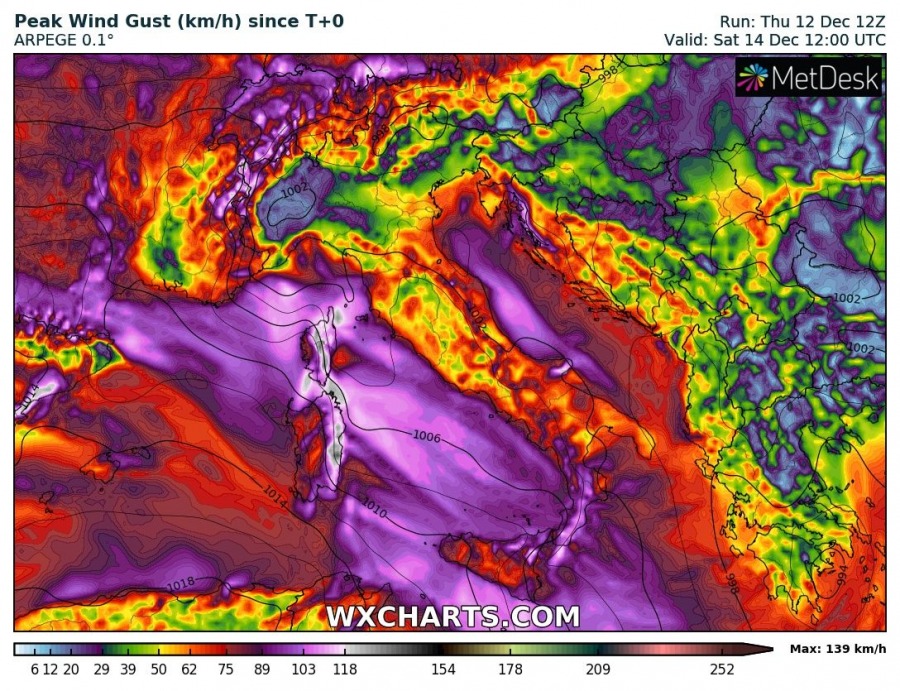 Stay alert for dangerous conditions and follow up our Facebook page as our teams will be out chasing with some live coverage.