A powerful windstorm is forecast to hit the British Isles and Ireland this Wednesday, when a large trough over the northern Atlantic pushes a deep surface cyclone towards Ireland. A large swath of severe to extremely severe winds is likely to develop from early morning hours SW of Ireland and continue spreading northeastwards through the day and eject into the North Sea by later afternoon hours. Locally, peak wind gusts could exceed 150 km/h.

A deep cyclone develops late Tuesday afternoon in the northern Atlantic and gradually moves towards Ireland overnight. It continues just west of the Isles on Wednesday where an associated cold front and severe winds spread across the region from southwest towards the northeast.

Attached is the comparison of ARPEGE and ICON-EU models regarding the evolution of the cyclone’s path and the associated windstorm from Wednesday morning until the evening hours. The strongest winds will likely hit southwest Ireland in the morning where the effect of deep cyclone will be the strongest. Peak gusts along the coastal areas could approach 140 km/h in some places. Besides high winds, major waves are also expected, along the coasts southwest Ireland and Wales. 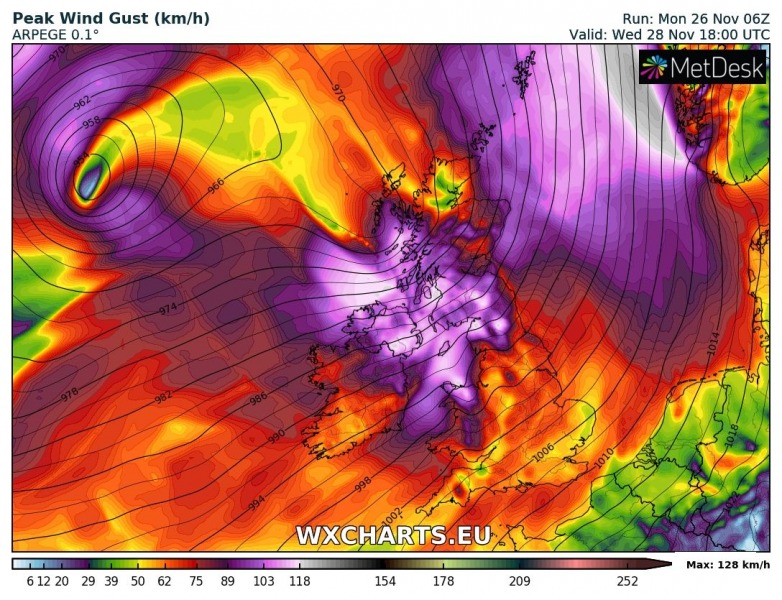 The cyclone will travel just west of Ireland and Scotland and will likely bring a dangerous windstorm on Wednesday. Peak wind gusts could locally reach 130-150 km/h, exposed elevated locations could see even higher gusts, in excess of 170 km/h (e.g. Scottish Highlands).

We are closely monitoring the evolution and will keep you updated – stay tuned!