A new season is approaching. Meteorological spring will officially begin on March 1st and will last to May 31st. All the official weather statistics for spring will also be gathered in this period. Let’s look at the latest seasonal forecasts and temperature and precipitation anomalies for spring.

The most widely used seasonal forecasting model is the CFS (Climate Forecast System) from NCEP. It is forecasting a pretty well known pattern. Positive NAO with ridging over eastern Europe. NAO is short for the North Atlantic Oscillation index. It is an index of pressure difference between the Azores region and the Iceland region. NAO is positive when pressure in the Iceland region is lower than over Azores. This pressure difference features a stronger western flow over the Atlantic region and towards Europe. 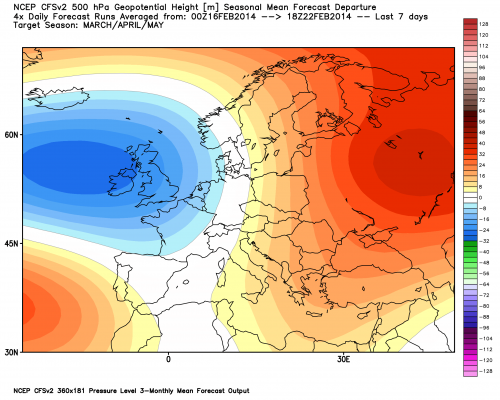 Positive NAO in average means warmer and wetter weather over continental Europe, because of the stronger western flow. With this west flow, a warm and moist airmass is being advected into Europe from the Atlantic region. The temperature and precipitation anomalies are as expected, warmer and wetter over most of Europe. This also means that this combination is quite stormy in nature. For example, most of the winter so far has been in a positive NAO mode, featuring a very active “Atlantic” with constant cyclones, of which some have caused severe damage over the British Isles. 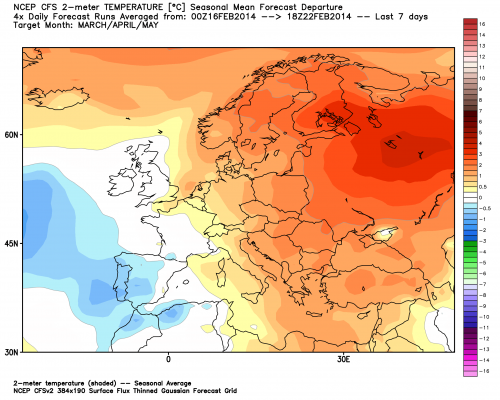 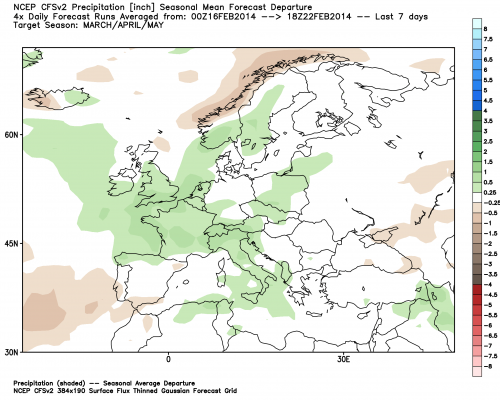 The UK-Met office from United Kingdom also runs their own seasonal model. It is forecasting a slightly different pattern but with a similar outcome. It features a negative 500mb geopotential height anomaly over north Atlantic and a positive anomaly in central Atlantic. This pattern corresponds to a west positive NAO. 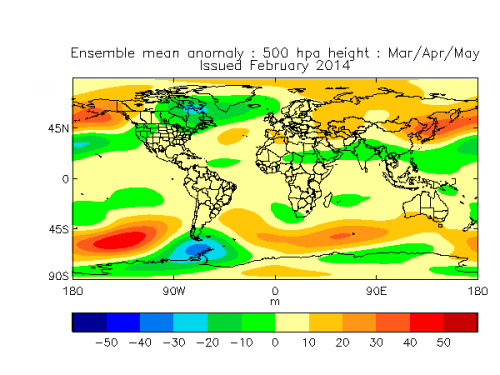 Again, the mean westerly to southerly flow over continental Europe would advect warm and moist airmass inland from west and south, which would translate to positive temperature anomalies and more precipitation. The Mediterranean and especially Alpine regions would have a decent surplus of precipitation if such a pattern would be realized. 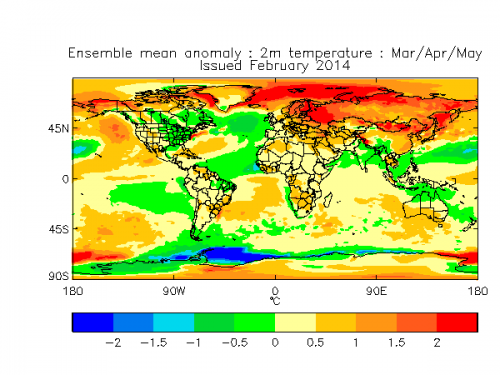 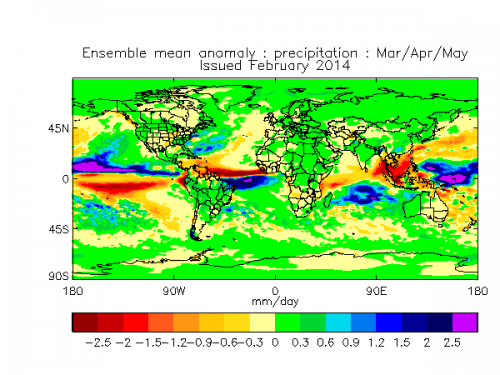 A similar forecast regarding the warmer and wetter spring, comes from the Russian Hydro-meteorological office seasonal probabilistic model. It seems that it has two low pressure areas, with near or above average precipitation over Europe and near or above average temperature over much of Europe indicating lower pressure more into continental Europe, resulting in a more north-easterly flow over Scandinavia and British isles. That causes the below average temperature over that region. A second low pressure area seems to be forecasted in the Atlantic region.

As expected from this pattern, the temperature anomaly is positive over much of Europe with the exception of more western parts. The precipitation anomaly forecast is average with some above normal regions over Europe. But there are no below average areas except on the far west end, as one would expect from the forecasted pattern.

The combined multi-model forecast generated by the WMO, is featuring the same pattern as mentioned above, with above average temperature and precipitation over much of Europe. The forecast consists of model forecasts from different meteorological centres around the world.

Another model to agree on the positive NAO idea, is the monthly forecast from JMA (Japan Meteorological Agency). It has a pretty much textbook positive NAO pattern, with above normal precipitation anomalies over Europe and normal to above normal temperatures. 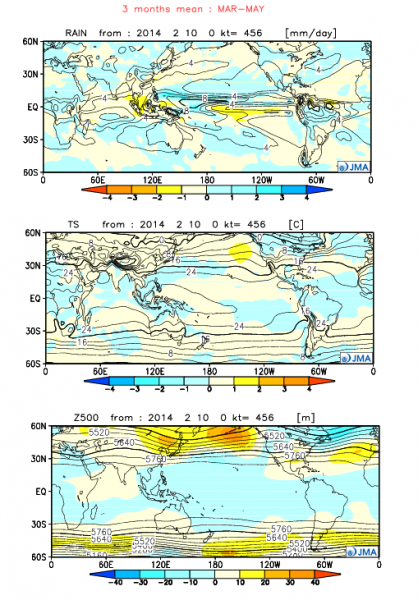 But not all models agree with the idea above. The Japanese JAMSTEC is forecasting a warmer and drier spring. It looks to feature more ridging over Europe and less intense low pressure areas in the Atlantic.

The seasonal forecast from the NCAR centre in USA also has a slightly different perspective, with much of Europe colder than normal and drier in the north and wetter in the south. It is featuring a negative NAO pattern. 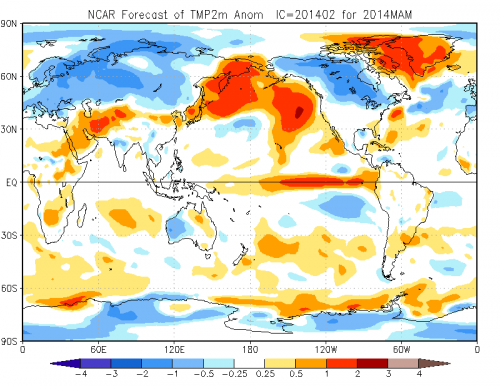 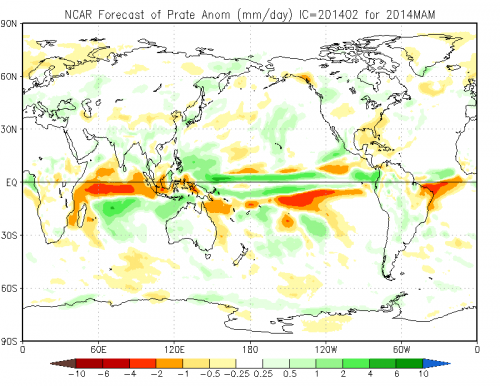 Conclusion:
Almost all models indicate that spring in Europe will be generally wetter and warmer than average. These seasonal models have lower spatial resolutions and cover larger areas with anomalies, so in reality more localised or regional anomalies can occur. But nonetheless the main overall idea remains in place. Such anomalies also indicate that the spring could be a bit more stormier than usual in its second part when the convective season begins.