Another major winter storm Diaz is shaping up for the northern United States this week, associated with a large upper low emerging from the Pacific Northwest. Heavy snow with severe blizzard conditions will blanket the northern Rockies and Dakotas on Tuesday. A sharp cold front will also bring severe weather with thunderstorms, tornadoes, and flooding potential for the Southeast U.S. on Tuesday night. With significant cold to return as the system turns towards the East late this week.

First, the winter storm, known as storm Diaz, will dump a lot of snow and blanket California’s Sierra Nevada before it turns for the Rockies. A frontal system will intensify on Monday, delivering the classic Northern Plains blizzard, with vast amounts of snow and travel disruptions from Montana and Wyoming to Dakotas. 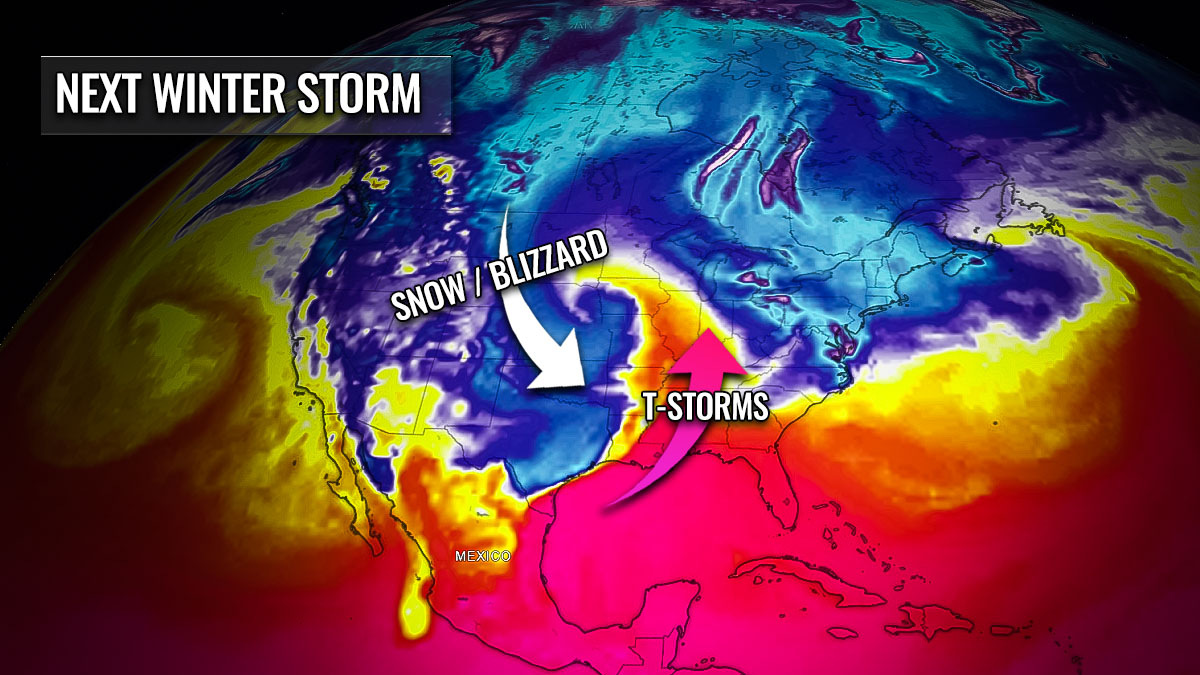 The associated sharp cold front will track southeast and increase the potential for bursts of severe thunderstorms, thanks to a strong jet stream aloft. Residents from eastern Texas to Alabama should expect storms from Tuesday afternoon to Wednesday night.

Through mid-week, an extensive reservoir of much colder air will spread into the central United States, reaching the Southeast towards the weekend as well. The severest cold is forecast to remain across southern Canada, Montana, and western Dakotas. With temperatures near 25-30 degrees below normal for mid-December. 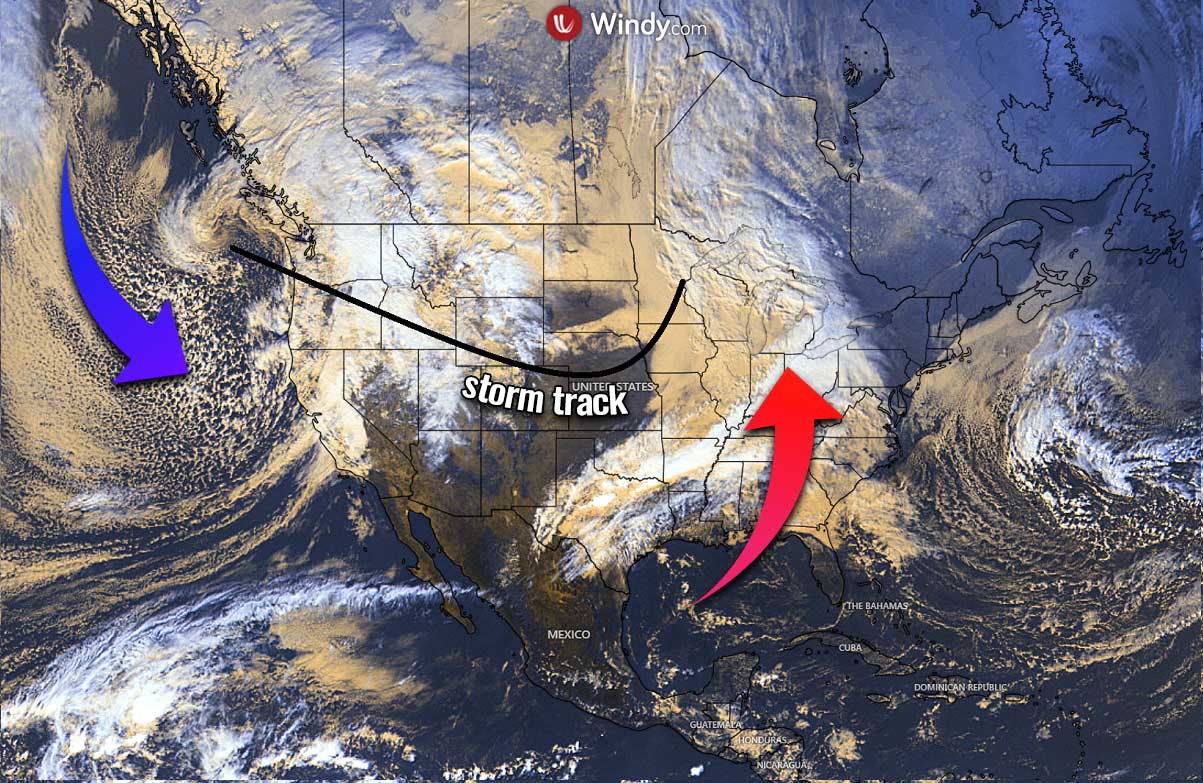 The above satellite image on Saturday this weekend reveals a developing winter storm in the Pacific Northwest as a deep Arctic trough slides in. The storm will track east-southeast through early this week, resulting in a warm and unstable air mass advecting into Southeast U.S.

As soon as the progressive weather pattern occurs across the central part of the North American continent, wintry weather conditions will spread east along the winter storm Diaz. Weather models also hint Diaz will track towards the East Coast next weekend, with the potential for more snow for the Northeast.

Winter storm Diaz will cross the Contiguous U.S. as a solid frontal system, associated with deep surface low, heavy snow and blizzard for the north, severe thunderstorms, and flooding potential for the Southeast. After the system ejects the Rockies, it turns towards the Upper Midwest by midweek. We can see how the strong cold will gradually spread in its wake throughout the week ahead.

The general weather pattern forecast this weekend is bound to result in another major winter storm named Diaz, as we learned above. The pattern across the United States and southern Canada is characterized by an impressive and intense upper trough emerging from the northwest. The upper trough gradually evolves into a deep low as it passes across the northern Rockies early this week. 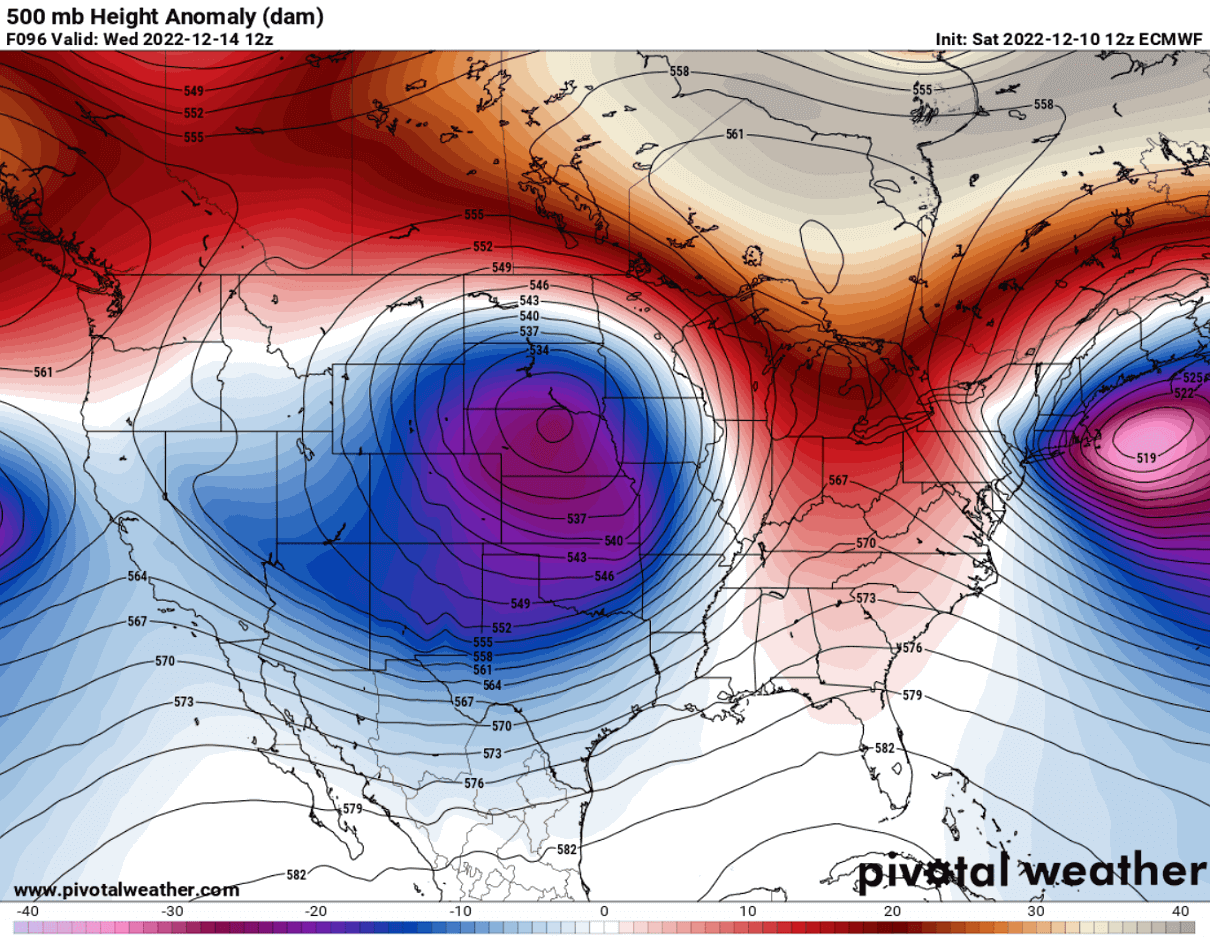 First, the upper wave is particularly deep in its early stage, developing over the Pacific Northwest before its core finally moves towards the Rockies on Monday. A typical result is gradually releasing a strong surface low in the Rocky mountains Lee side. This means that conditions are forecast to rapidly deteriorate with the winter weather, including heavy snow and blizzards. The worst impact is forecast to develop for parts of Wyoming, Montana, western Nebraska, and the Dakotas.

The tracking system is rather typical for this part of the United States, as a surface low moving from the High Plains into the northern Great Plains and Upper Midwest brings increasing winds with a strong pressure gradient developing against the warmer air ahead of it. Thus, it usually leads to the potential for severe blizzard conditions accompanied by very heavy snow. 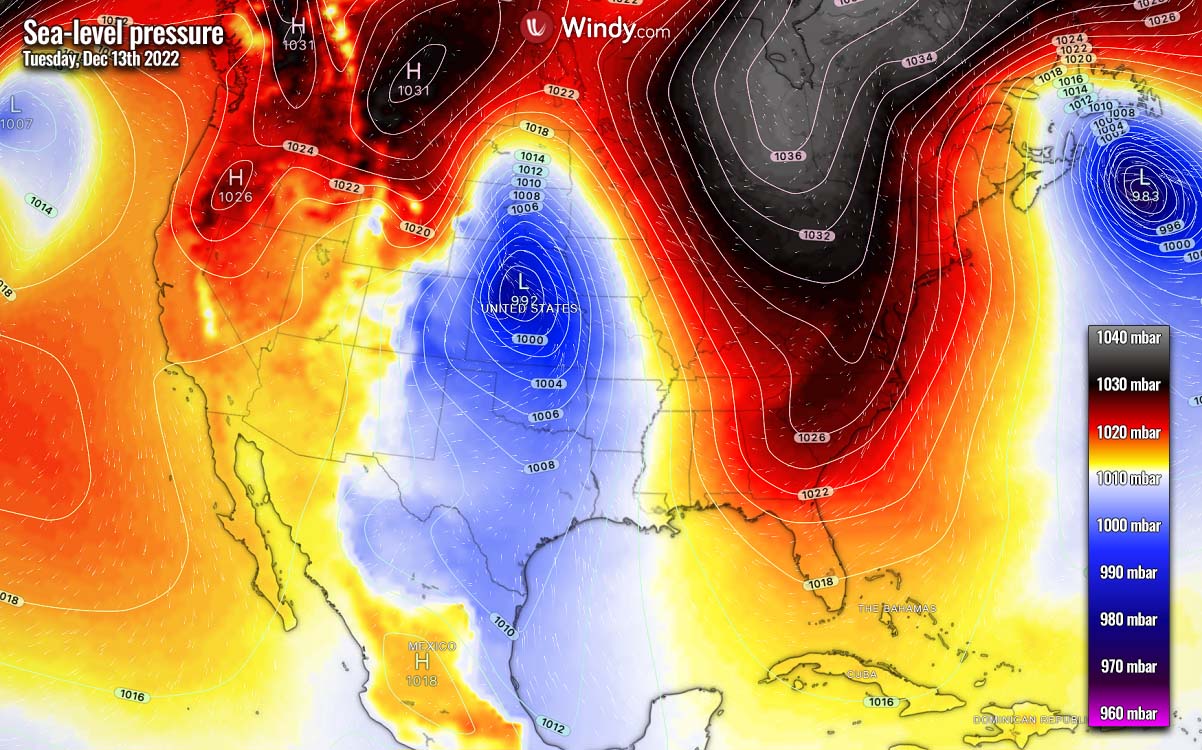 Winter Storm Diaz is forecast to develop heavy to locally very heavy snow for the Northern Plains on late Monday, gradually spreading east while the surface low continues towards the Dakotas and Minnesota on Tuesday into Wednesday.

Snow will be very intense at times across the northern Rocky Mountains and Dakotas on Tuesday, accumulating fast. Deep snow accumulation will lead to travel disruptions and slippery roads for travelers across the region. 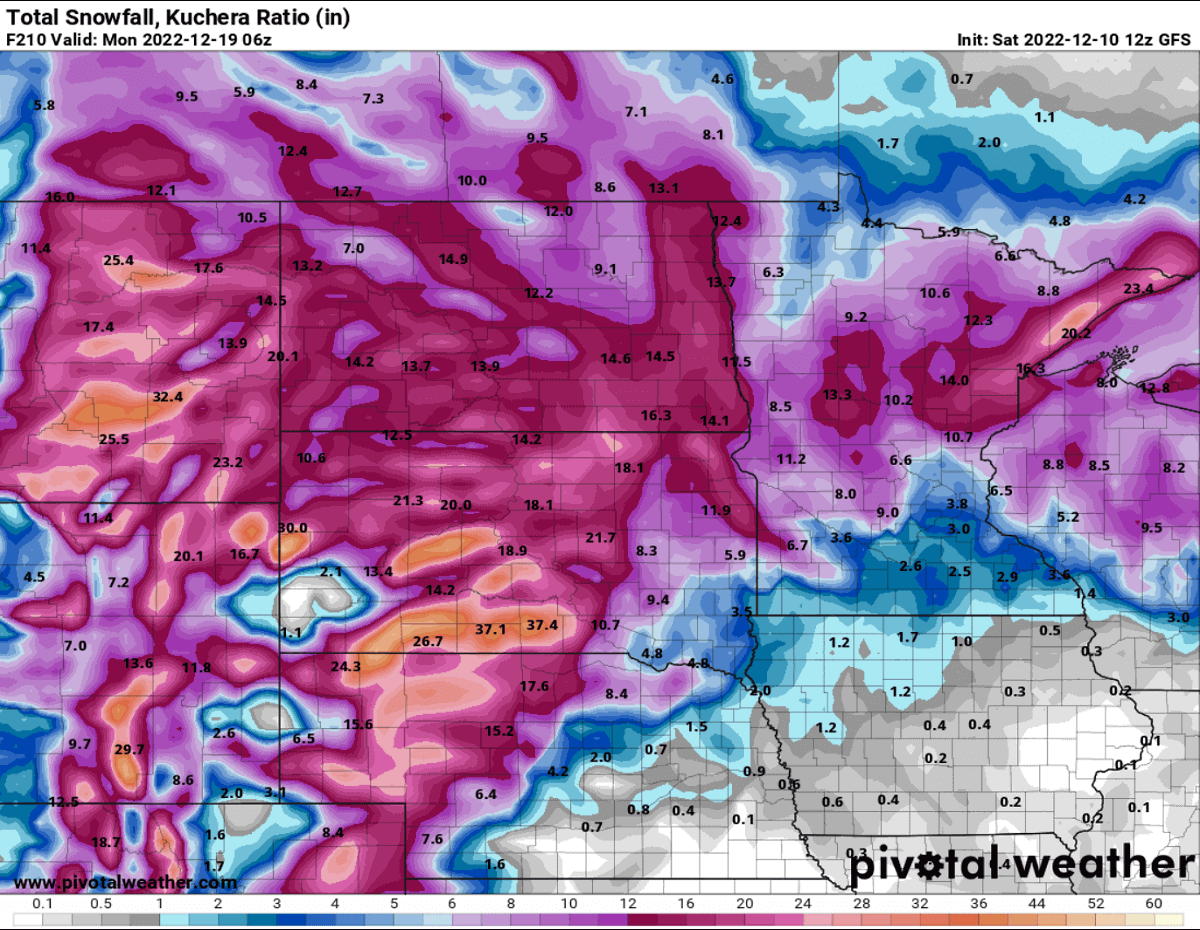 Total snow accumulations are forecast to be the highest across eastern Monday and west-central Dakotas, including western Nebraska. Many areas are forecast to receive around 2 feet of snow (20-30 inches). Possibly even more snow is locally possible. Especially near the core of the traveling surface low. Precisely across southern parts of South Dakota.

With a combination of convective and orographic snowfall forecast across the High Plains, high moisture and increasing winds will push the snow accumulations up quickly from early Tuesday for the Rockies. The highest amounts of up to 3 feet of snow are reasonably possible.

While the general model consensus is in good agreement, the worst areas hit will be in South Dakota, very near the winter storm’s core track. 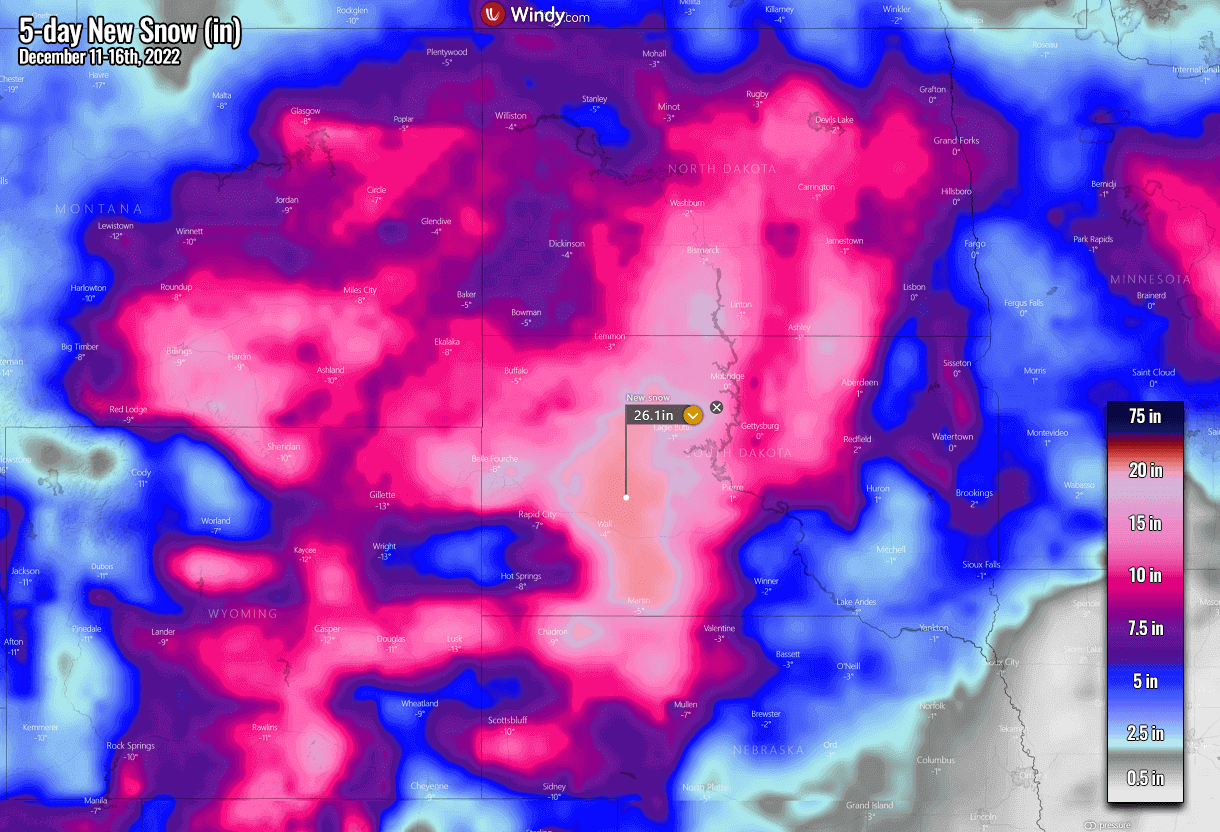 The tight pressure gradient will result in strong to locally also severe winds from early Tuesday through Wednesday around the center low. With frequent gusts above 45 to near 60 mph across the Northern Plains. The strongest northwesterly winds will spread from the western Dakotas and Nebraska to Kansas Tuesday night.

This combination of very heavy snow and severe winds is forecast to produce blizzard conditions. Expect significantly reduced driving and travel conditions, with near-zero visibility from blowing snow. Roads may be impassable and closed, including stretches of Interstates 90 and 94, typically most affected by these types of winter storm events. 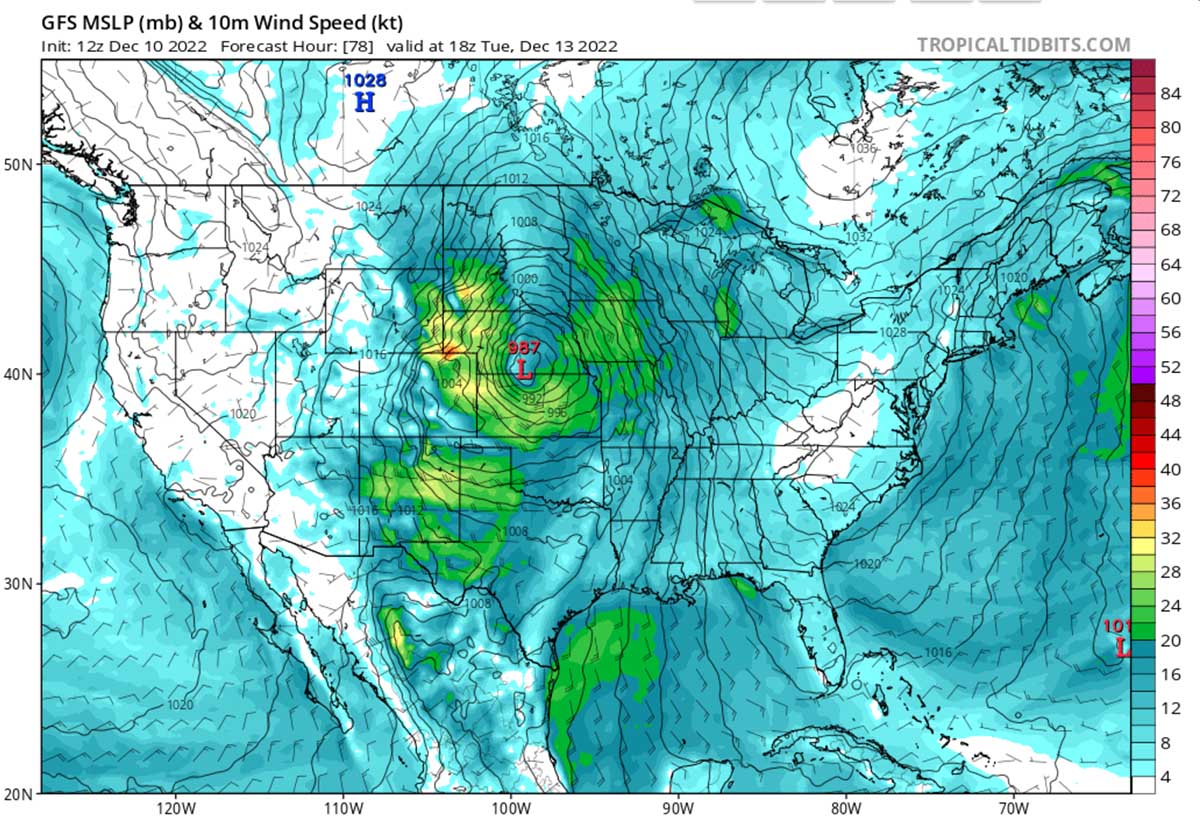 Travelers across the Northern Plains from late Monday into Wednesday should consider being cautious about rapidly changing and deteriorating weather conditions as the winter storm Diaz intensifies. It is also advised to delay or postpone unnecessary travel for the storm to pass.

FREEZING RAIN AND ICE STORM POSSIBLE FOR IOWA AND MINNESOTA

Areas to the east-southeast of the storm’s core and the heaviest snowfall could also take advantage of the returning warmer air aloft. Therefore, weather conditions could lead to a narrow band of sleet and freezing rain. Especially across parts of Iowa and Minnesota from late Tuesday into early Wednesday. 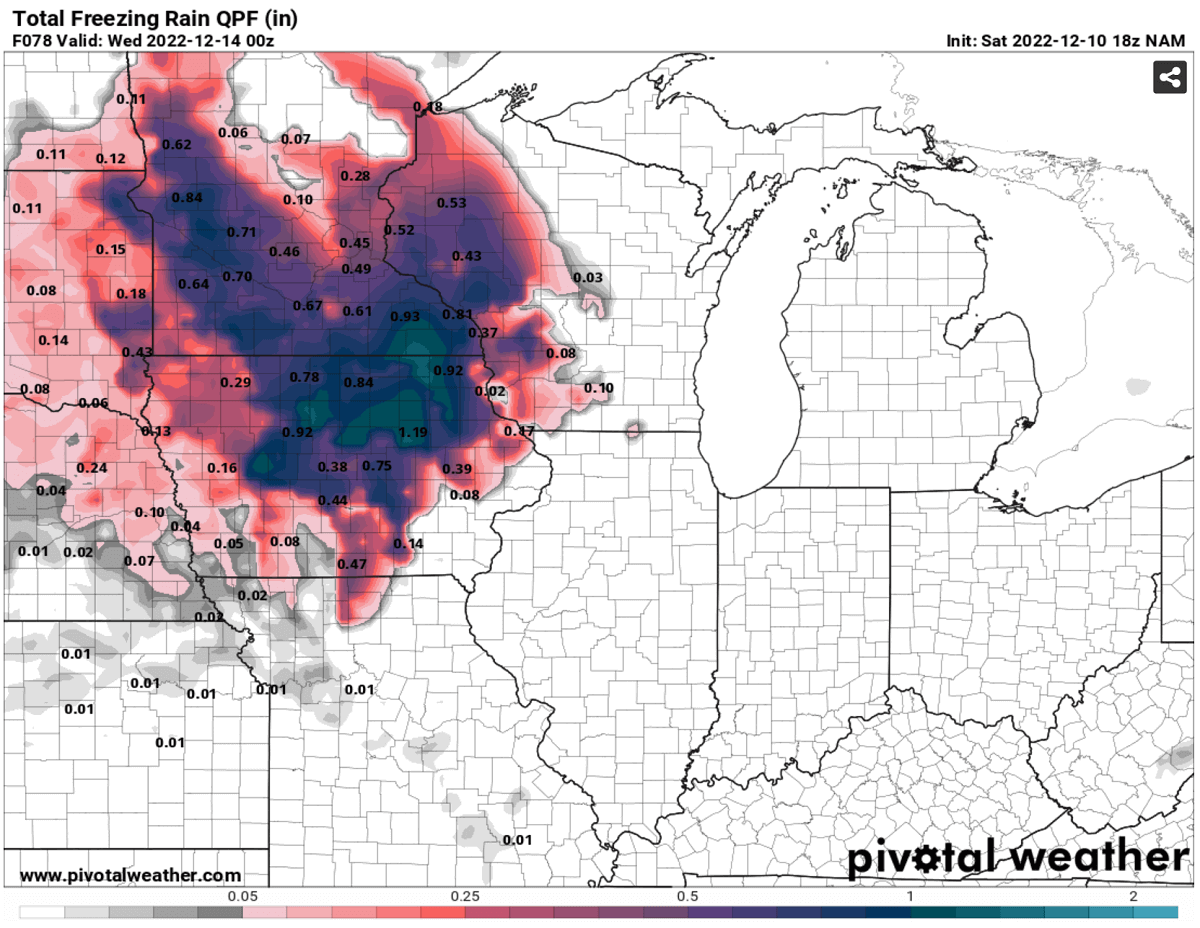 Significant ice amounts of a half-inch to 1.0″ are possible in northern Iowa and south-southeast Minnesota, leading to slippery travel conditions, power outages, and potential tree damage. Precipitation will likely stay as rain further south, and roadways may become icy and could be closed.

Some freezing rain is also possible across far eastern South Dakota and western Wisconsin. The weather chart below hints at the general conditions on Tuesday midday, with heavy snow across western Dakotas and freezing rain across Iowa and southern Minnesota. With heavy rain across Missouri and storms further south. 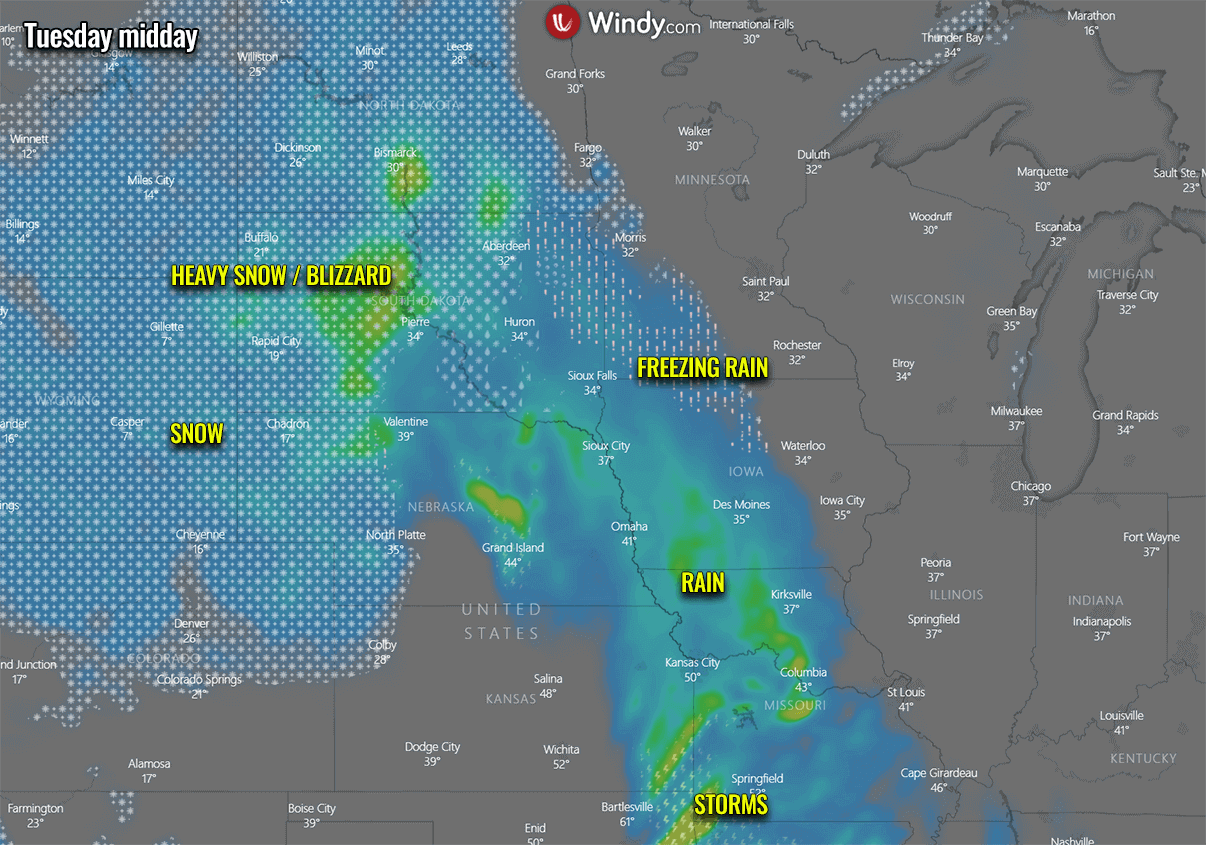 The winter precipitation as snow is forecast to be very low until the much colder air mixes farther east. So the conditions will favor a freezing rain environment until late Tuesday. Rain is forecast to change into snow Tuesday night when temperatures finally cool down to support snowflakes there as well.

Then, temperatures are forecast to become much lower with time on from north to south from Tuesday to Thursday as the winter storm advances further east-southeast. Much colder weather with very cold temperatures will spread in the system’s wake, arriving from southern Canada into Montana. Then continuing into the northern Plains, Midwest, and further southeast late this week.

This mid-December pattern across North America is a typical weather setup when a major winter storm develops in the north-central Contiguous U.S. As such, it typically also introduces a strong advection of Arctic cold airmass in its wake. Southern Canada is forecast to get the blast by frigid low temperatures of -15 to -20 degrees F.

The temperature anomaly will be particularly significant across the Alberta and Saskatchewan provinces starting early Tuesday into Wednesday. Extremely cold air will then gradually spread into Montana on Tuesday and continue east-southeast on Wednesday and Thursday. 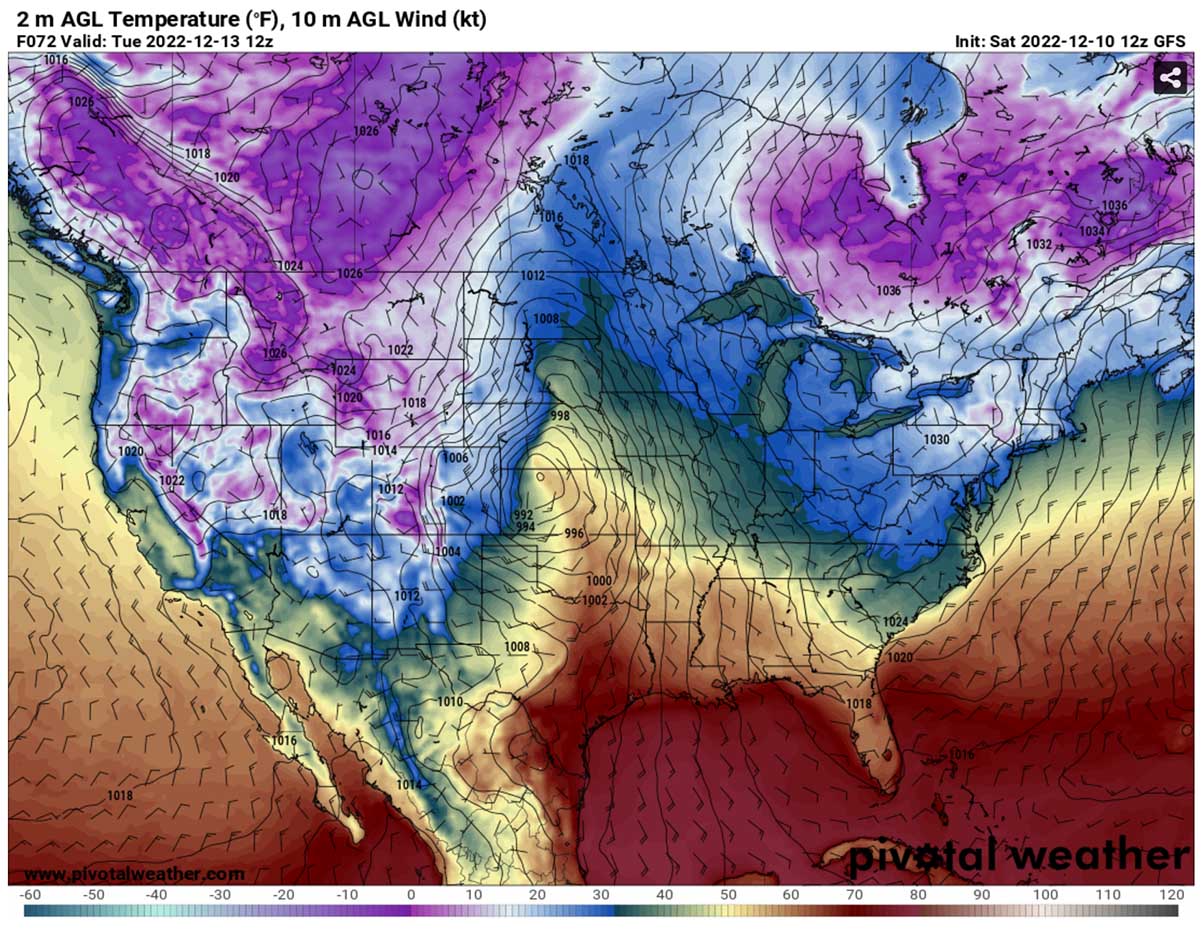 The temperature will be nearly 30 degrees below normal in southern Alberta’s mid-December period. Temperatures will be down to nearly -20F (-30 °C), which is around 30-40 °F colder than normal for the region.

With the winter storm progressing east on Wednesday and Thursday, the temperature contrast between the areas ahead of the cold front and in its wake will be pretty impressive. Temperatures will be near 20-25 degrees warmer than normal on the front end, creating a strong gradient with those 30-40 colder on the other side of the Arctic front.

This can also explain why the near-surface winds will be so significant and support severe blizzard conditions for the North Plains across western Dakotas to Nebraska. Strong winds will result in extreme windchill temperatures.

By Thursday morning, colder temperatures will already spread across the central United States, reaching the southern Plains and mid-Mississippi Valley. With remaining warmth only over the eastern Gulf Coast region.

SEVERE WEATHER WITH TORNADOES FOR THE SOUTH AND THE GULF COAST

The deep surface low associated with the winter storm Diaz will create typical contrast of cold air in the north and warmth in the south. Thus, resulting in strong jet stream winds in the upper levels. As strong moisture and warm air mass return will overspread southern states, from eastern Texas across the lower Mississippi Valley to Southeast U.S. 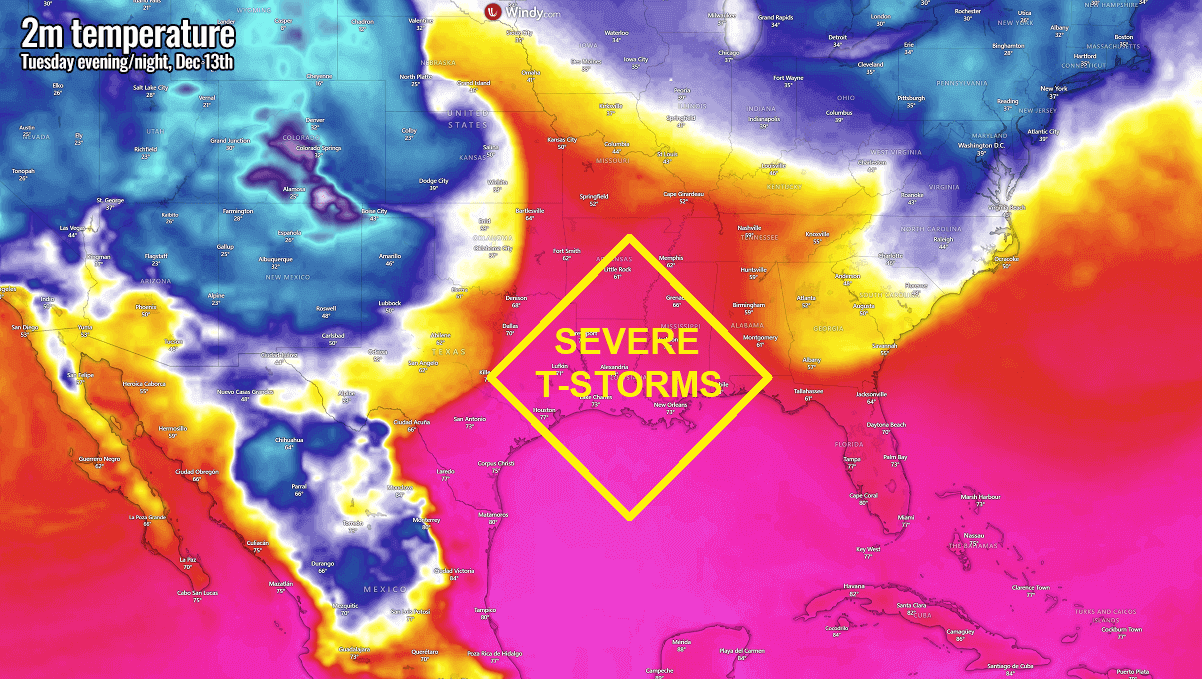 While some severe storms will be possible across parts of Texas and Oklahoma on Monday, the main focus for potential severe weather is during Tuesday and Tuesday night. Conditions are coming together for the extreme weather and tornado threat across areas from eastern Texas to the Mississippi River valley.

Thunderstorms could bring tornadoes, including strong ones, large hail, severe winds, and heavy rain. The main severe weather threat is expected to occur during the nighttime on Tuesday across the Mississippi River and spread towards western Kentucky, central Tennessee, and west Alabama into early Wednesday morning.

The Southeast U.S. has already received a lot of rain in recent weeks so the new rain could lead to some urban and stream flooding is quite likely given the very saturated soil. 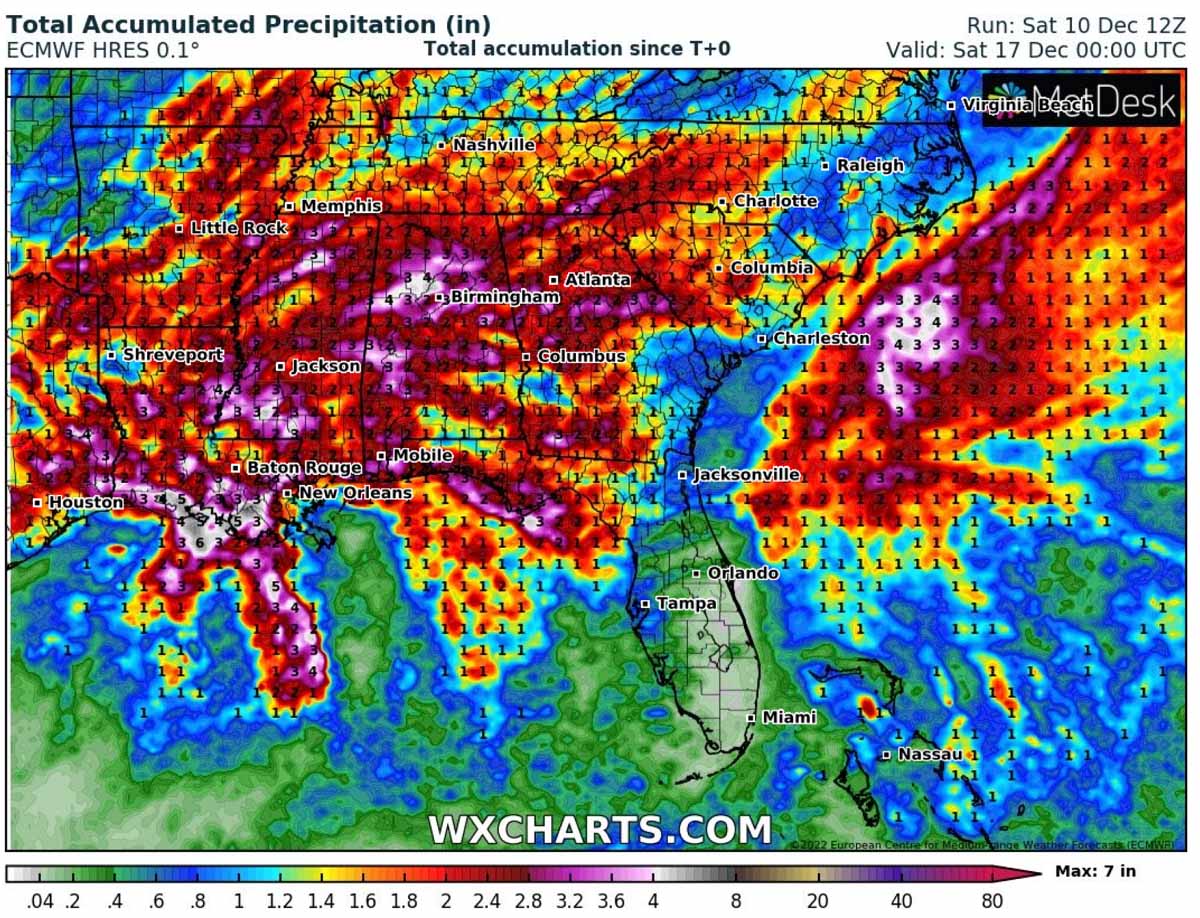 The heaviest rain will develop with storms along the moving cold front, inducing flash floods.

The winter storm will mature towards the weekend, with a closed upper low moving across the central United States into the East Coast and Southeast. This is a secondary stage of the weather pattern evolving, with a developing strong High over the western U.S. and a further deepening low for the East. 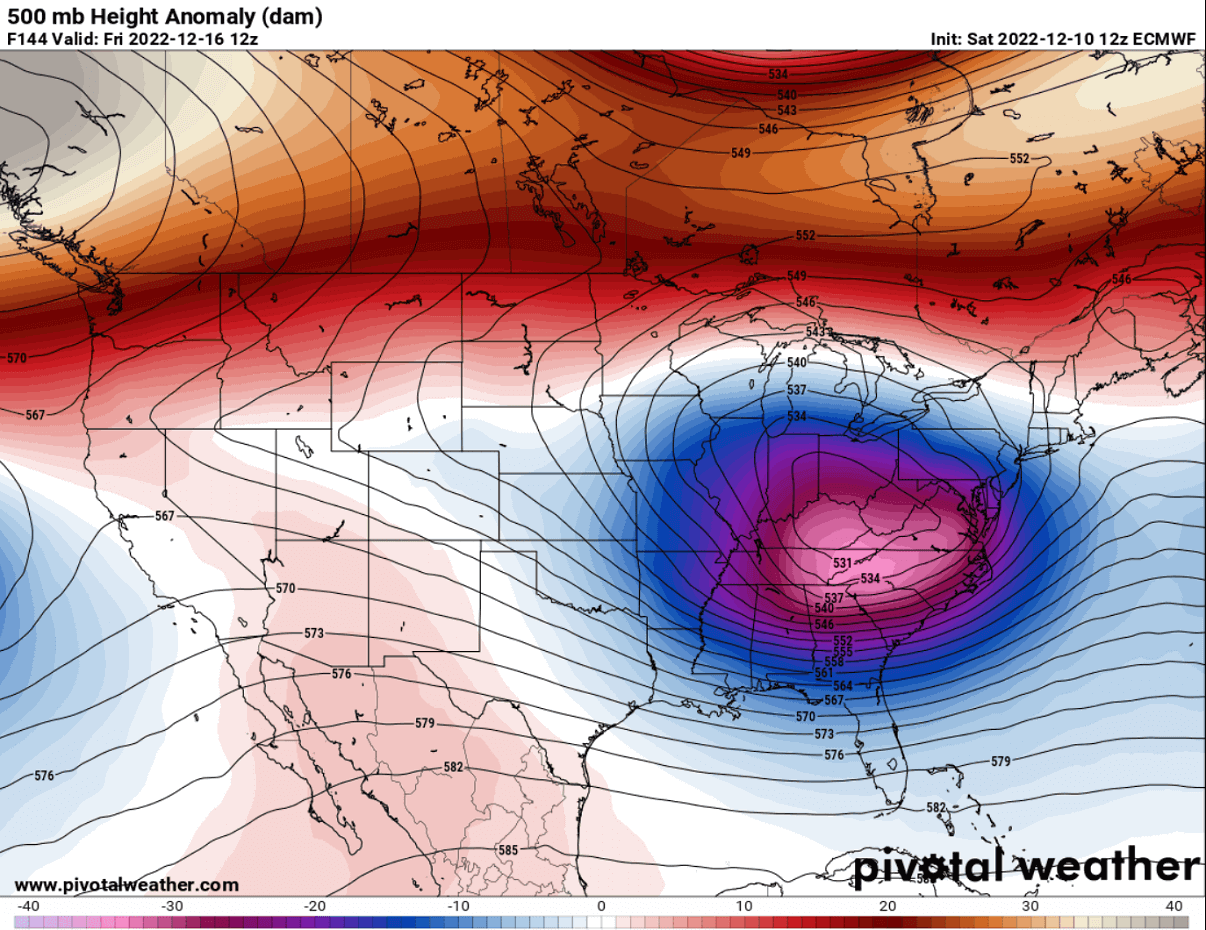 This will allow a much colder air mass to move generally towards east-southeast in the storm’s wake, gradually spreading into the southern U.S. and towards the East into the next weekend.

While the air mass temporarily warms up the far north, the much colder temperatures will follow across the southern CONUS from Saturday through Monday next week. Temperatures are forecast to be 15 to 20 °F below the average for many cities across the south. 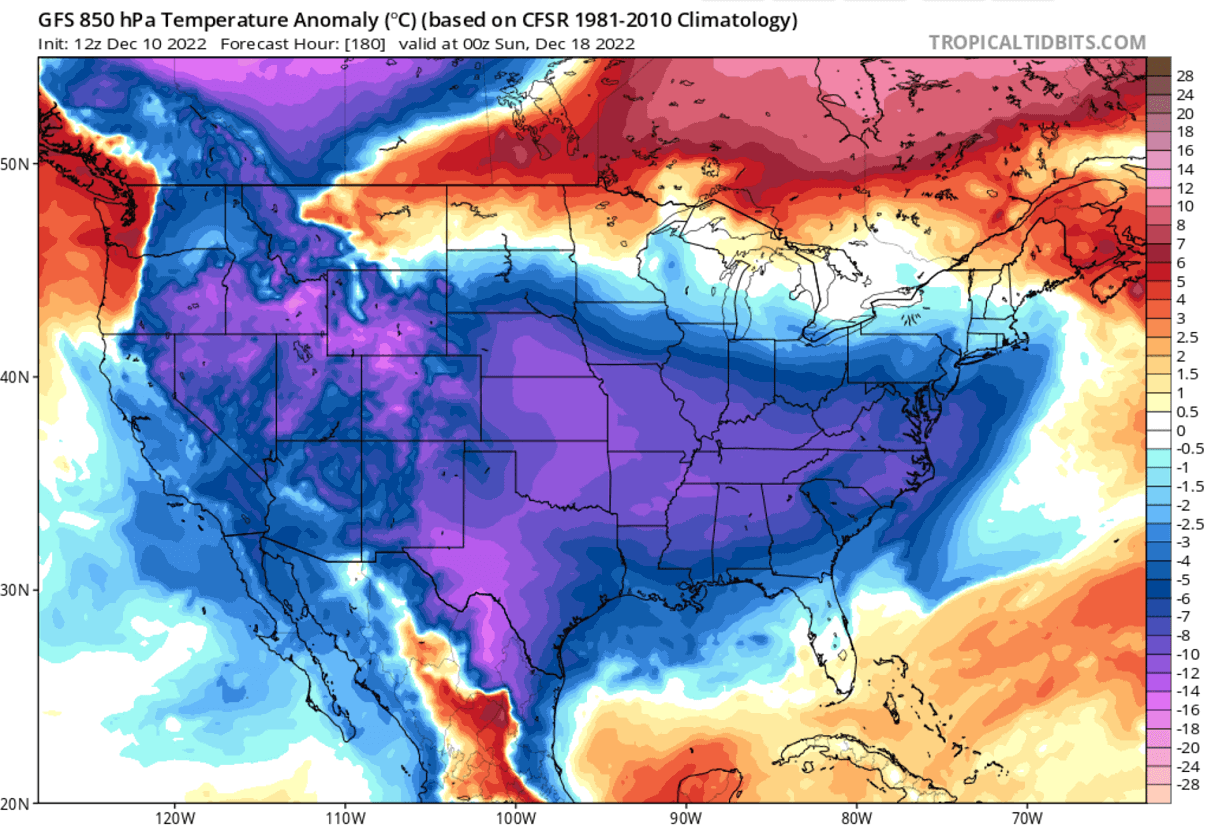 By early days next week, much colder weather will also reach the deep South and Southeast U.S. Monday and Tuesday next week could bring frosty mornings as far south as the central Gulf Coast. From southeast Texas, Louisiana, Mississippi, southern Alabama, and Florida Panhandle.

Temperatures should gradually continue towards the East Coast next week, depending on the further evolution of weather patterns across the United States. 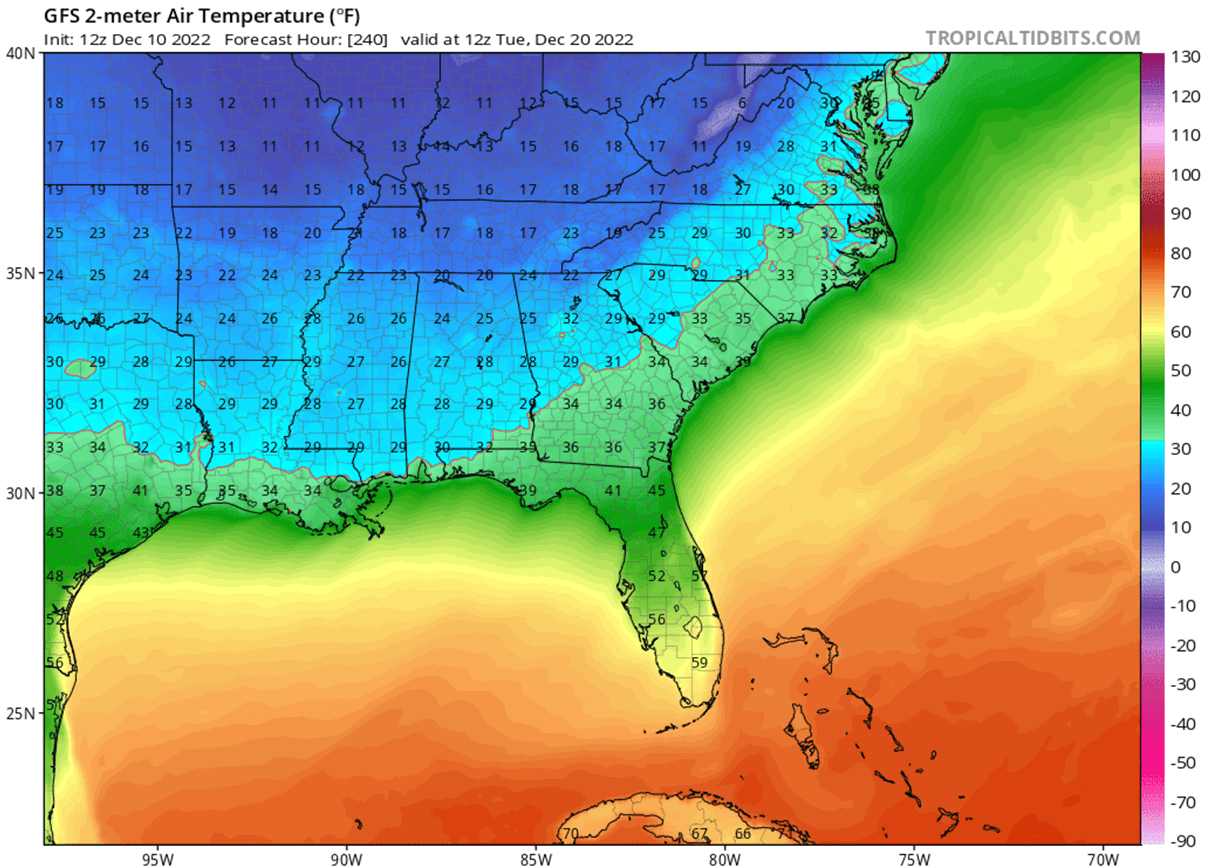 Stay tuned for further updates on the developing weather patterns across North America this week, as a winter storm could also bring major snow and blizzard for portions of the Northeast U.S. around the next weekend.