Significant Warming will develop in several areas of the northern hemisphere early this week starting from Greenland and Central Europe owing to the intense dynamic in the troposphere triggered by a deeply meandering jet stream between Alaska and Scandinavia. Heatwaves will affect Europe and the Mediterranean followed by an Arctic cold outbreak in eastern Europe and the Balkans. 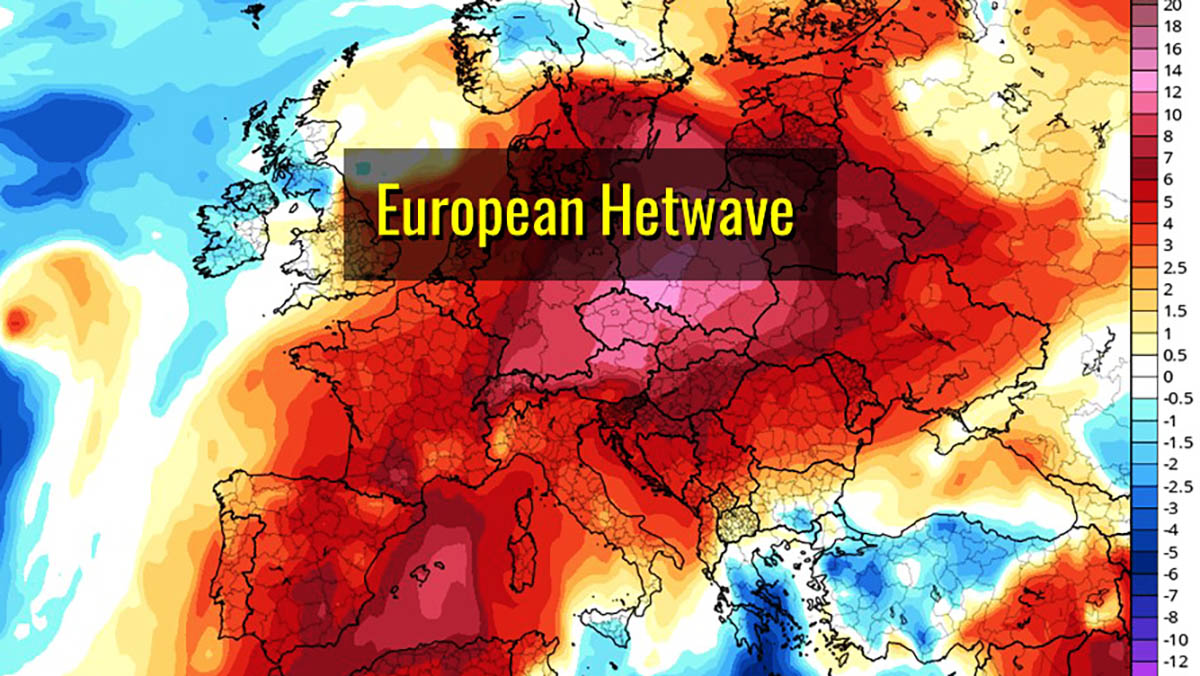 Extreme dynamism will characterize the Northern Hemisphere weather next week. Perhaps the most striking event is certainly represented by the intense warm advection heading towards Greenland early this week. Temperature anomalies are forecasted to exceed +20°C over much of Greenland where warming will be significant.

The weather pattern is characterized by a severe ripple in the jet stream between North America and Europe with a loop of the jet stream directly heading into north Greenland. In the image below we can see the huge Rossby Waves developing between Alaska and Scandinavia. 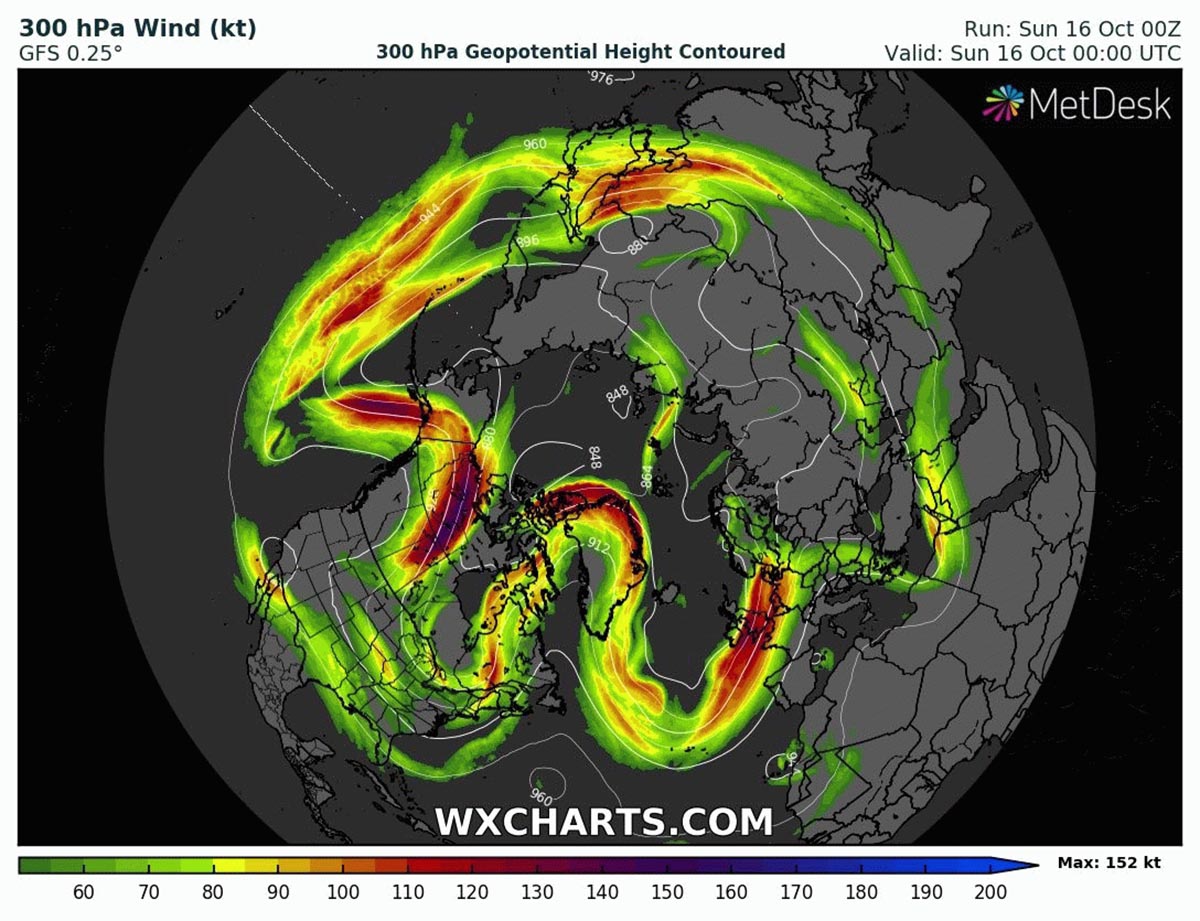 As a direct consequence of such a pattern, intense positive Geopotential anomalies at 500 hPa will move from the Rocky Mountains and Alaska towards the central part of North America and will develop into Greenland.

While significant warming is forecasted in several areas, on the eastern sectors of such structures, colder air is flowing from the Arctic towards mid-latitudes forming active low-pressure systems on the Central and eastern parts of North America and the North Atlantic. This pattern is clearly visible in the image below where the 500 hPa Geopotential Height Anomaly for October 17th, Monday. 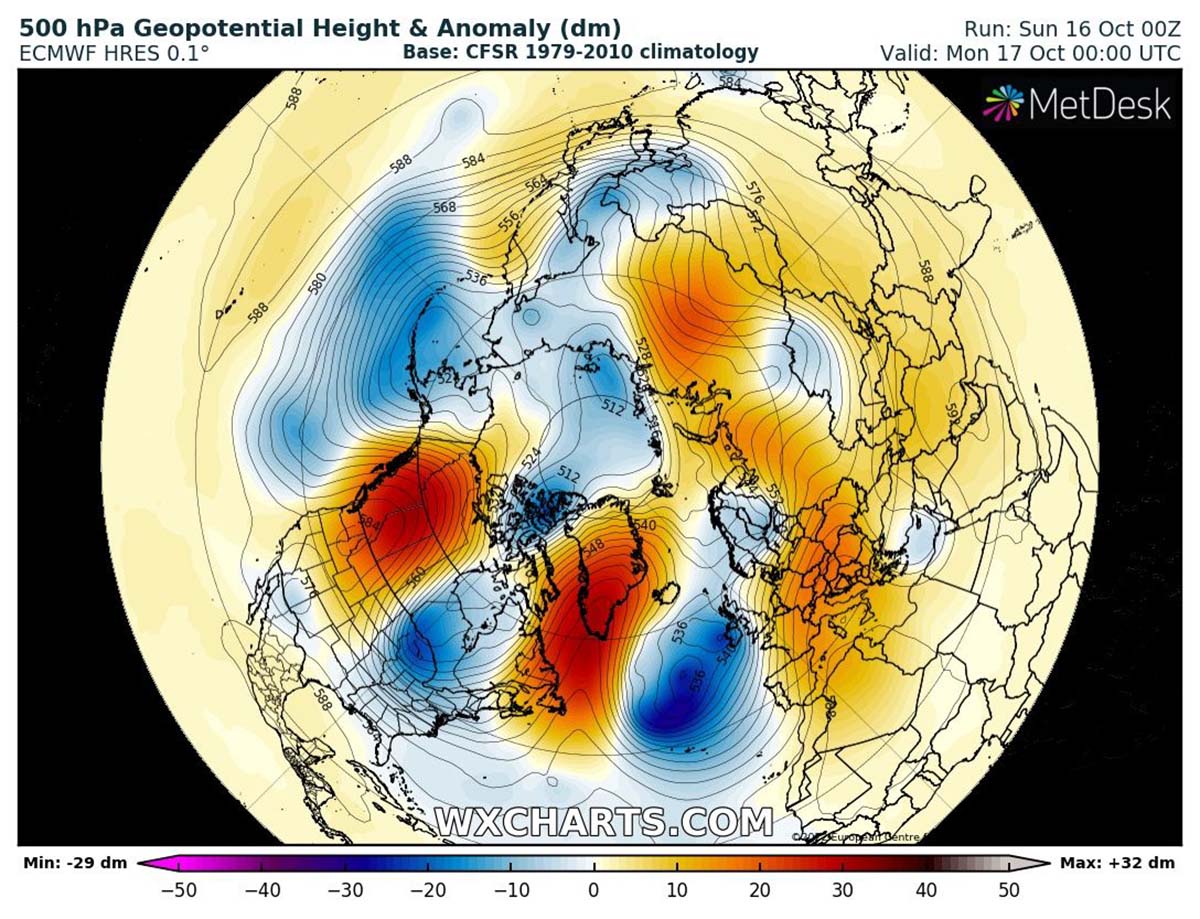 A Significant Warming Heads Into Greenland, as well as western North America, early this week with two extremely warm lobes moving north followed by cold outbreaks moving along the eastern sides of the high-pressure systems.

We have prepared a video animation of the weekly jet stream and 500 hPa Geopotential high anomaly evolution in the northern hemisphere this week to better highlight what we are describing.

A rather deep cyclone active in the Atlantic will then trigger mild air masses to move from north Africa toward Europe. Such configuration is summarized in the image below where 850 hPa temperature anomalies and warming for Monday 17th are presented. 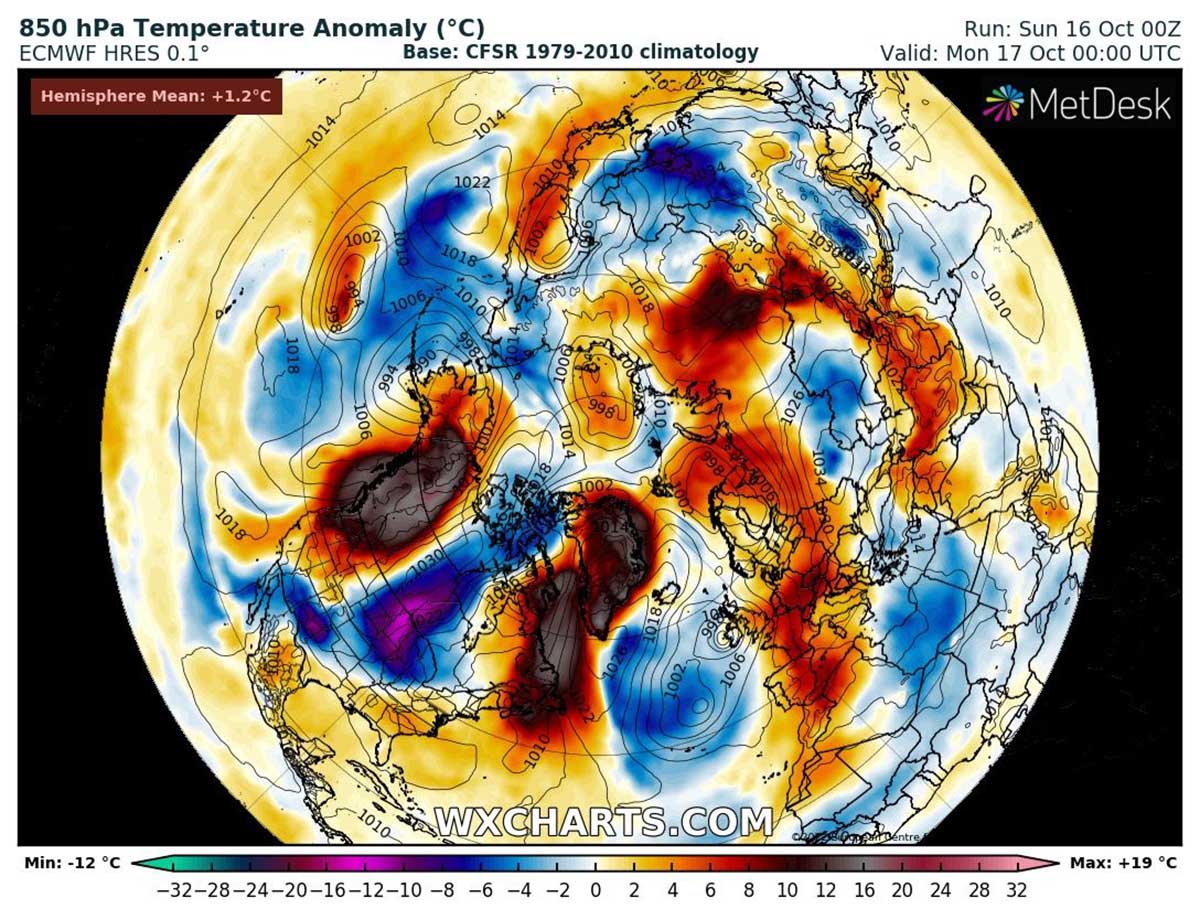 In the image below we can see the forecasted temperature anomalies for Greenland on October 17th, according to the European model ECMWF. In the center of the Greenland ice sheet, temperature is forecasted to exceed +20°C of difference from the normal mod-October average.

This could lead to extreme warming and close-to-zero degrees Celsius in many parts of the ice sheet, which is something extremely unusual for Autumn.

The 500 hPa Geopotential Height Anomaly shows a powerful High-pressure system developing over Central Europe early this week according to both the GFS and ECMWF forecasting models. In the image below we see how the ECMWF forecast brings the Centre of the anomaly between south Poland and Slovakia Monday 17th. 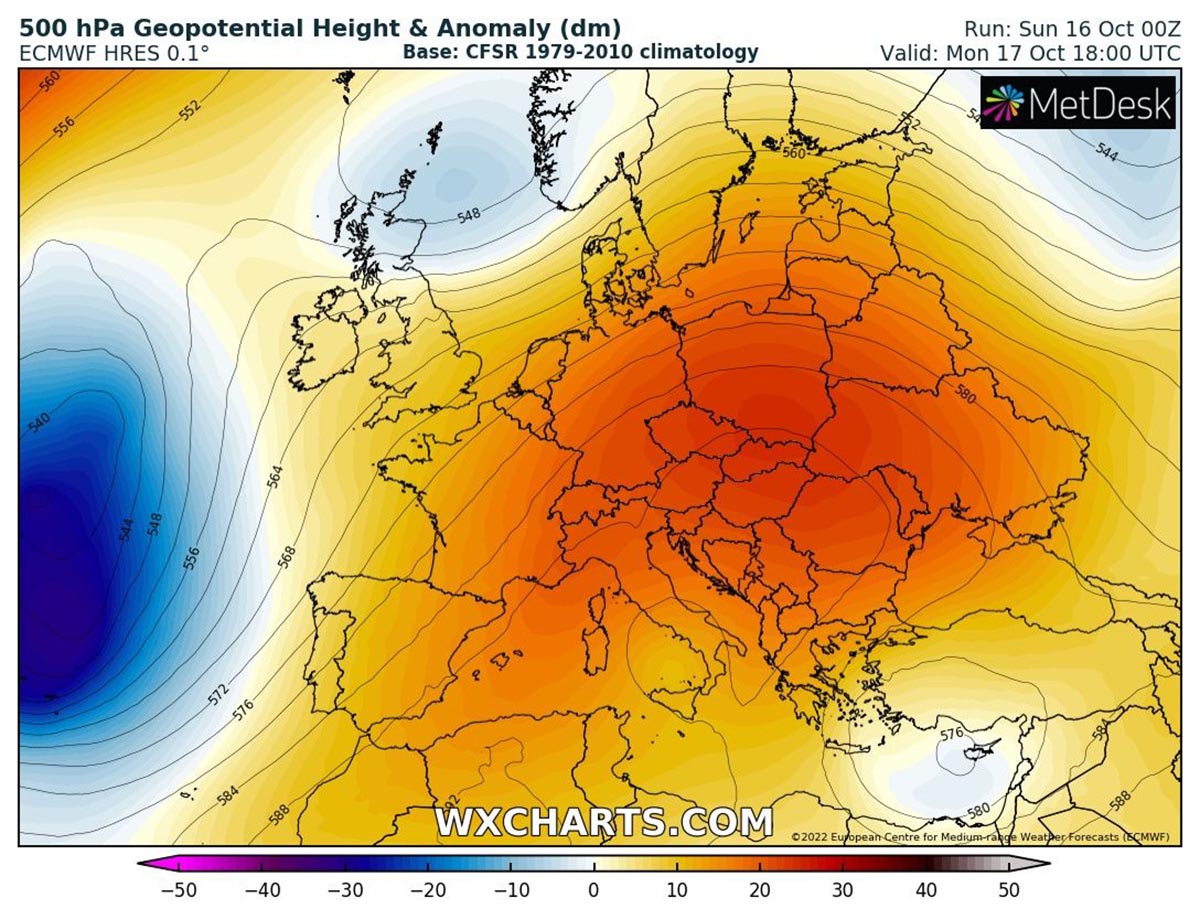 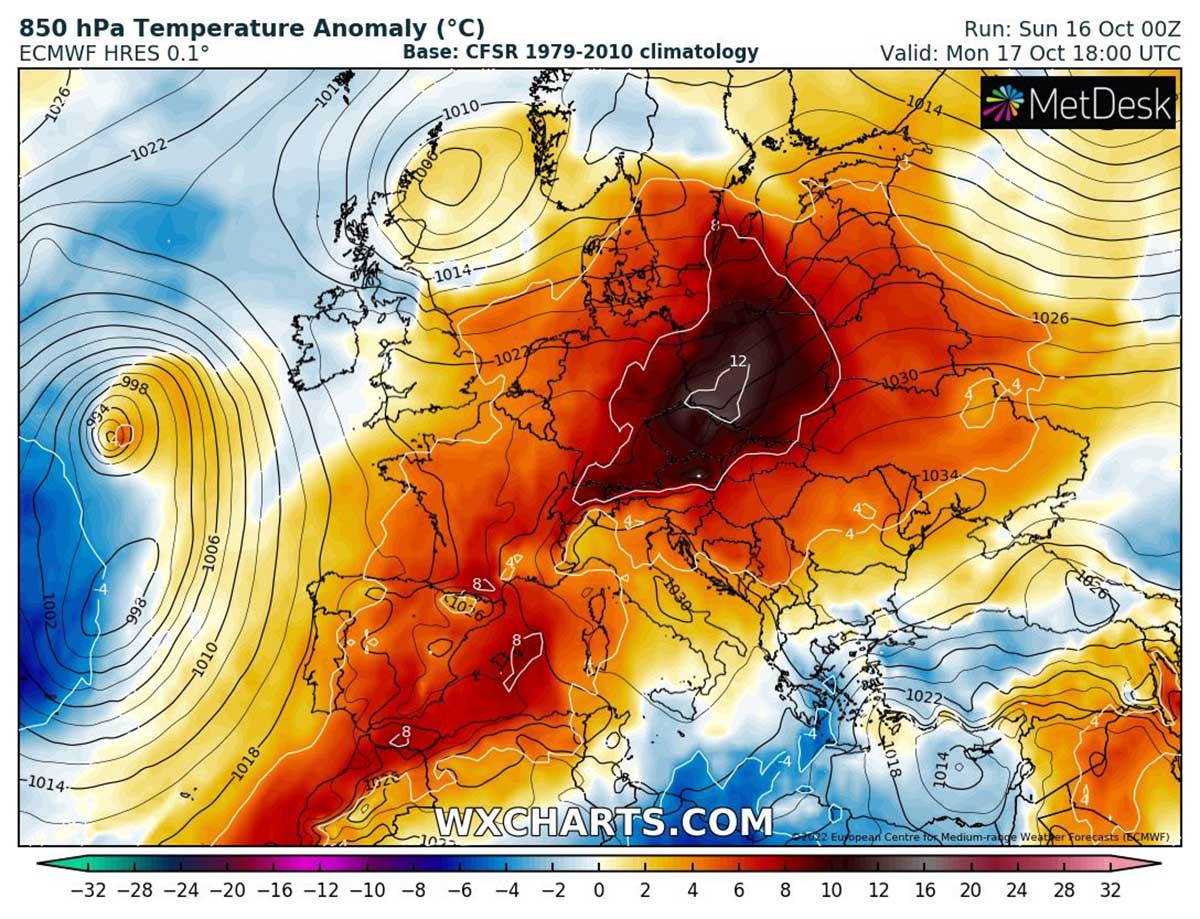 As a consequence temperatures on the ground (at 2 meters) are forecasted to rise first, especially over central Europe. Daily extremes will be around 25°C in southern and eastern Germany with locally 26-28°C. Rather cooler on western Germany and the Atlantic European coast with daily extremes around 16°C.

Over the Iberian peninsula, widespread areas will exceed 30°C Tuesday, with warming producing daily extreme locally around 35°C in Andalusia, the most southern part of Spain. 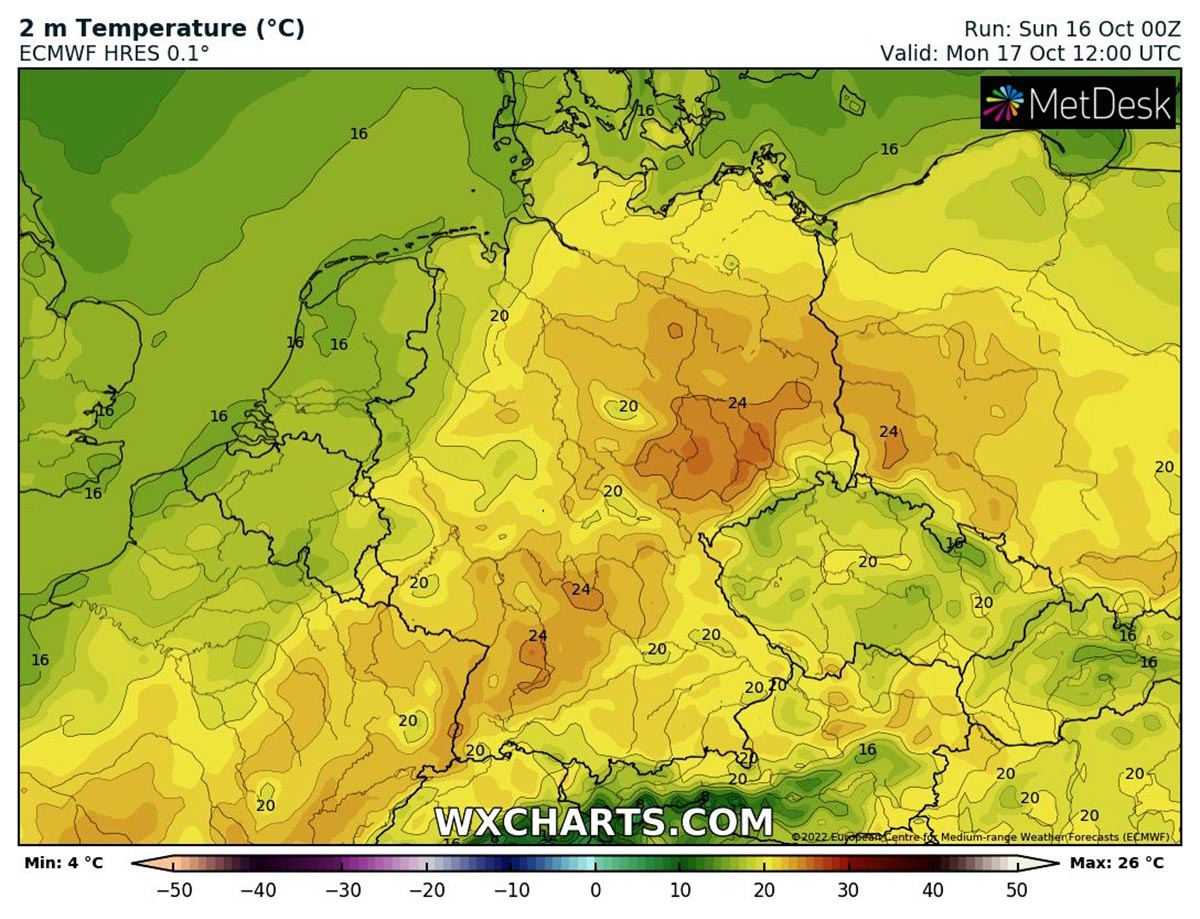 A rapid change in the pattern will develop starting from Wednesday. The large upper-level ridge resulting in pretty much stable weather across central and eastern Europe will collapse, pushed west by a fast Arctic cold outbreak.

Farther west over the Atlantic, the large mid-latitude cyclone will keep influencing the weather there virtually squeezing the warm air mass that arrived from central Europe. 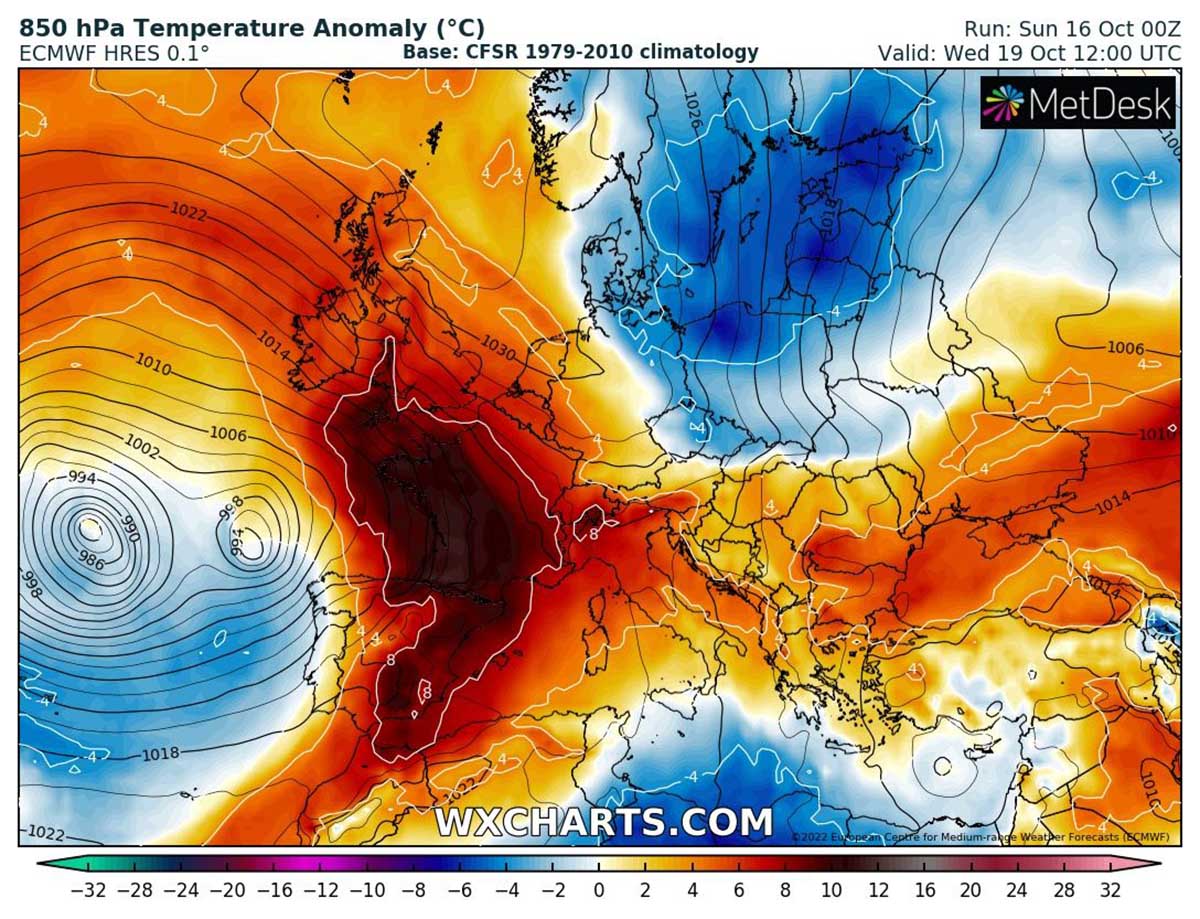 With such a powerful cyclonic system, the wind field is broad and pretty strong. It causes a strong warm advection from the south towards the north-northeast, gradually strengthening and expanding farther north into the British Isles and Scandinavia.

To the east, the fast and deep cold air mass will rapidly move to the Balkans likely causing the first wintery weather conditions. Towards the end of the week, Europe will be virtually cut in two, with warmer than average conditions in its western ad northern areas, and colder weather in its eastern area, especially the Balkans. 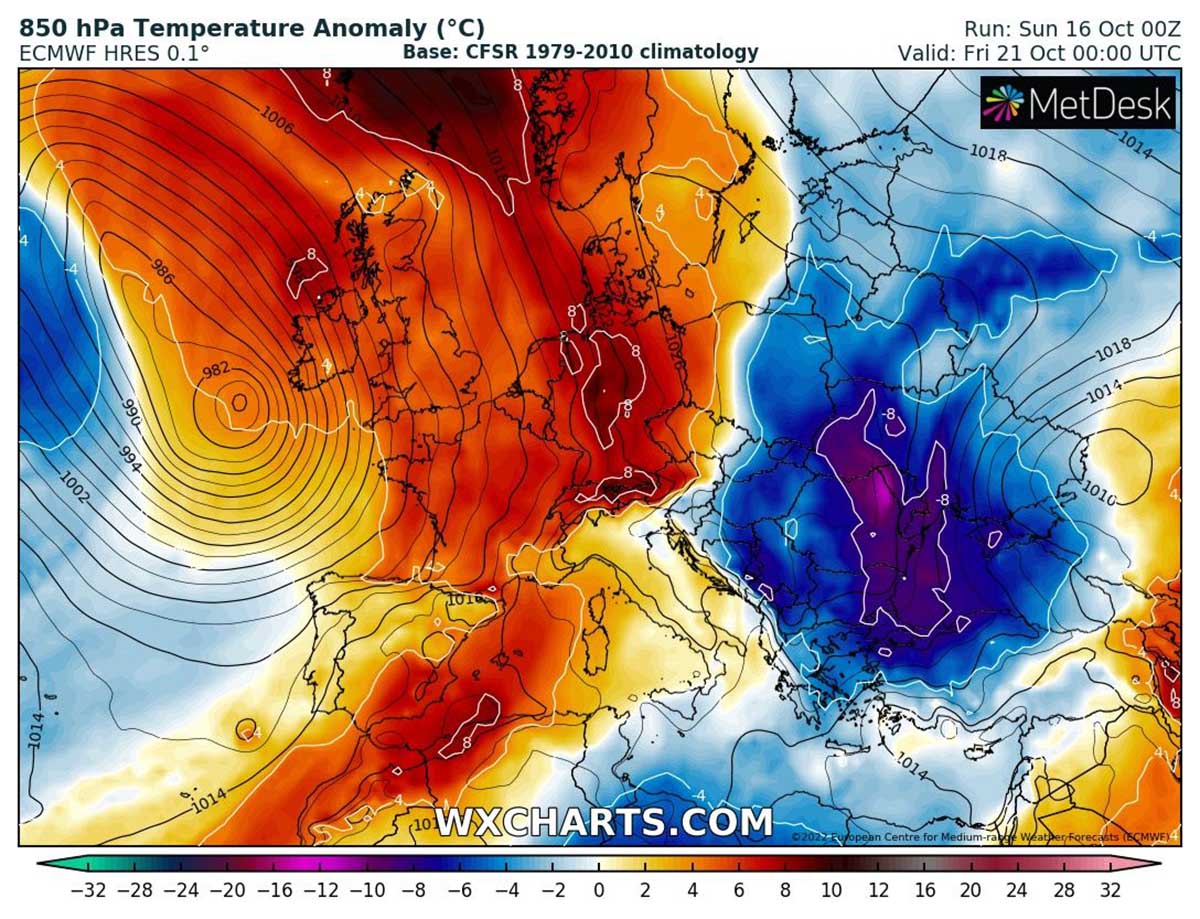 Night and early morning frost conditions are expected in the Balkans during the winter, especially in Romania. In the image below the forecasted 2 meters temperature according to the ECMWF model over Romania between Saturday 22 and Sunday 23.

Low extremes around -4°C are expected for a large part of central and northern Romania, locally exceeding -6°C. 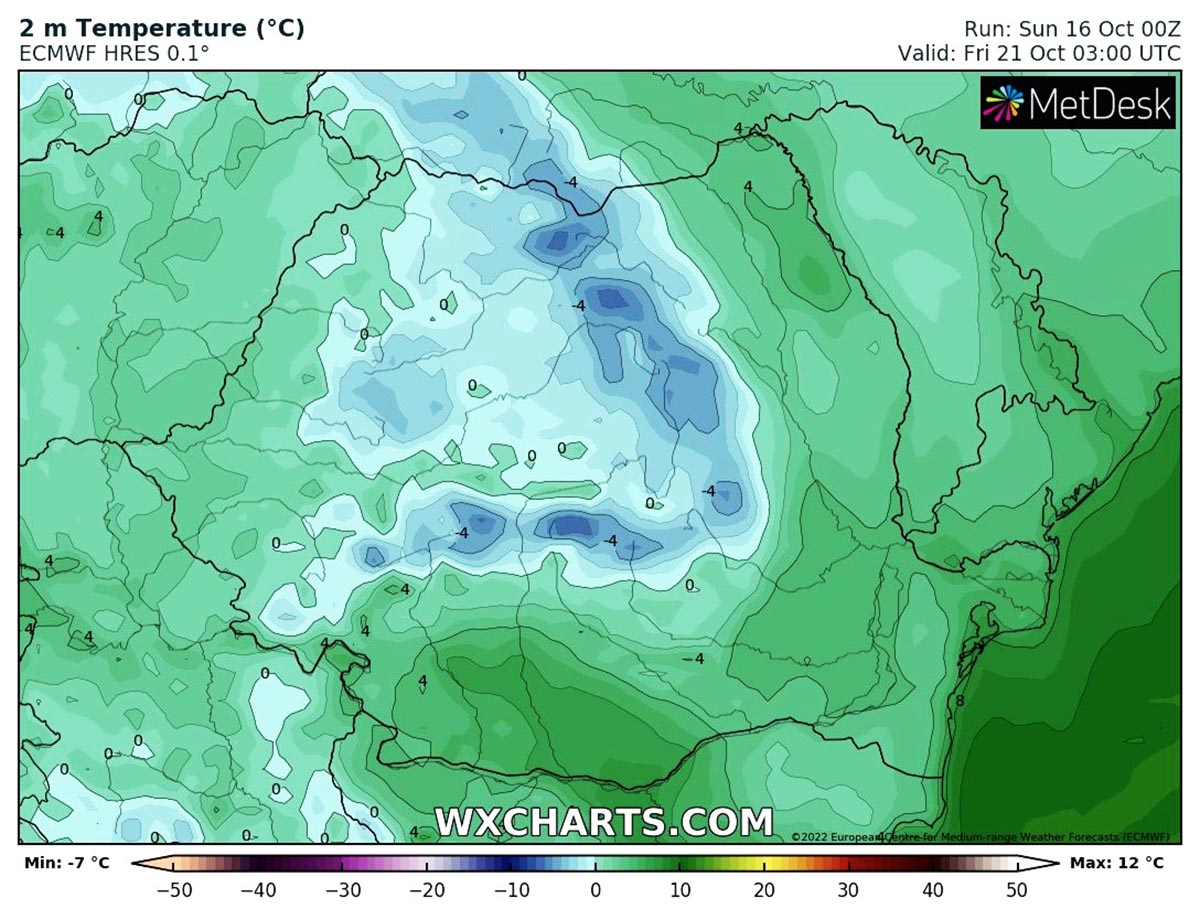 At this stage, the mid-latitude deep cyclone will move its center of action towards the coasts of France and the British Isles. Western Europe, precisely Ireland, and the UK should see unsettled weather conditions, but fronts will not be particularly strong. However, winds could be strong to severe in places.

This pattern will eventually force the final evolution of the warm air mass moved from Africa during this weekend, directly affecting the Mediterranean Basin. The 850 hPa temperature anomaly plot from ECMWF shows this configuration is valid for 6pm Sunday 23 October with new warming forecasted for the area of southern Europe. 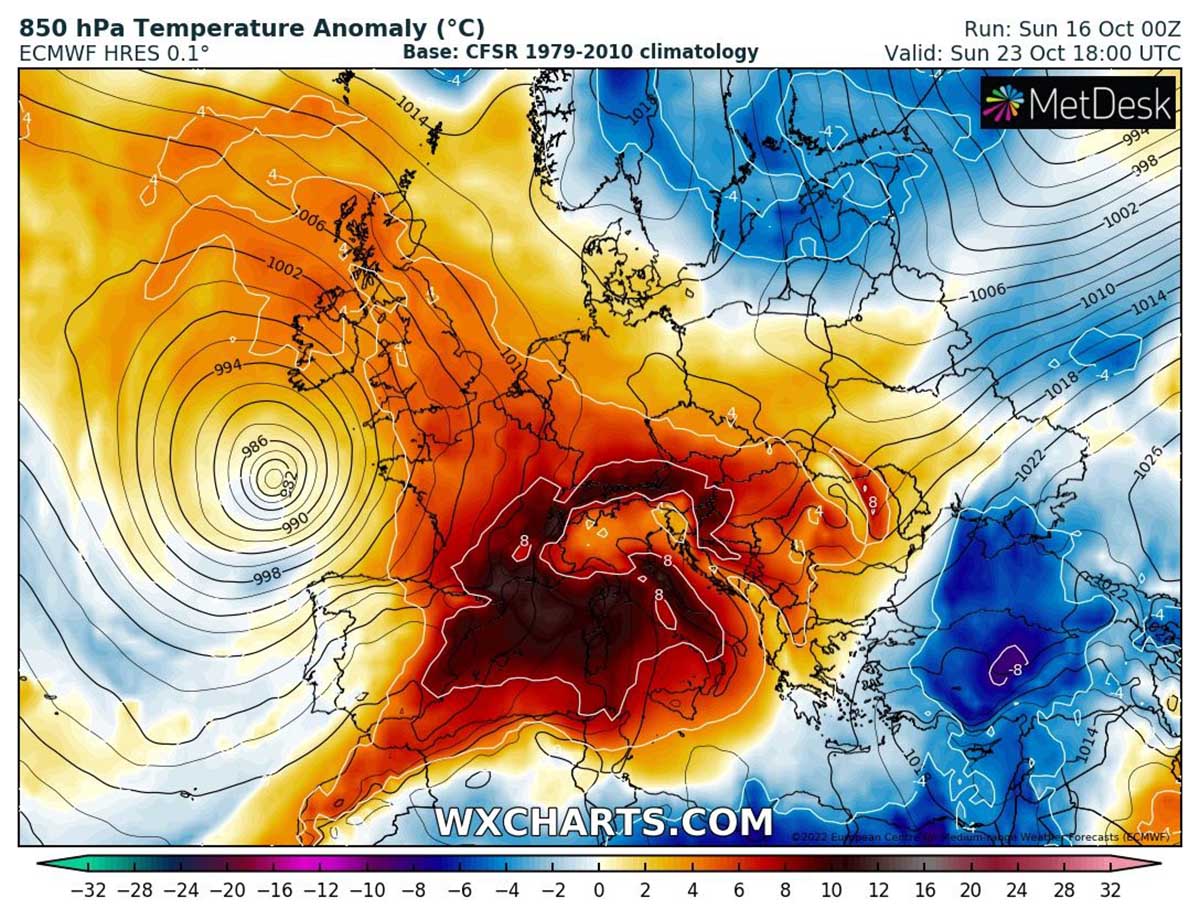 There will be a huge temperature and pressure difference between the Low over North Atlantic and the High over the Mediterranean, supporting strong southwesterly winds aloft. So the warm air mass will have no barriers to limit its further eastward progress into the Italian Peninsula.

Sunday 23 will be very likely an extremely warm October day in western and southern Italy, with probably 24-26 °C across a large part of the country. Temperature closing in the upper 20s in Sardinia as well as in Corsica isles. Even a hot day is not excluded there due to the downslope Foehn flow from the Apennines into the Italian Adriatic coasts.

We will keep you updated on European and global weather forecasts, so make sure to bookmark our page. Also, if you have seen this article in the Google App (Discover) feed, click the like button (♥) there to see more of our forecasts and our latest articles on weather and nature in general.