The weather pattern across the United States will see a significant change this week. After the cold wave across the eastern and central parts of the country, another quite strong cold blast is forecast for the East Coast. While to the west, a strong blocking high brings very warm weather far north. A significant warm wave is then forecast to gradually flush away the cold pool and expand spring-like temperatures across much of the United States by Thursday.

With the progress of the new week, the cold pool which has spread from Canada into the central and eastern United States will vanish in the middle but intensify into the East coast. Cold weather is forecast to be relatively short, but quite intense across the northeast US.

But at the same time, an upper-level ridge is strengthening across the western half of the United States with a significant warm air mass advection from the south towards the north-northeast. Very warm spring-like weather will reach far north to the Canadian border, gradually spread east, and replace the cold pool across the eastern United States.

SHORT, BUT INTENSE COLD FOR THE EAST COAST

The upper-level ridge has begun strengthening over the western CONUS on Tuesday, resulting in a more southward trajectory of the trough to its east. The upper trough deepens and moves into the northeast United States. 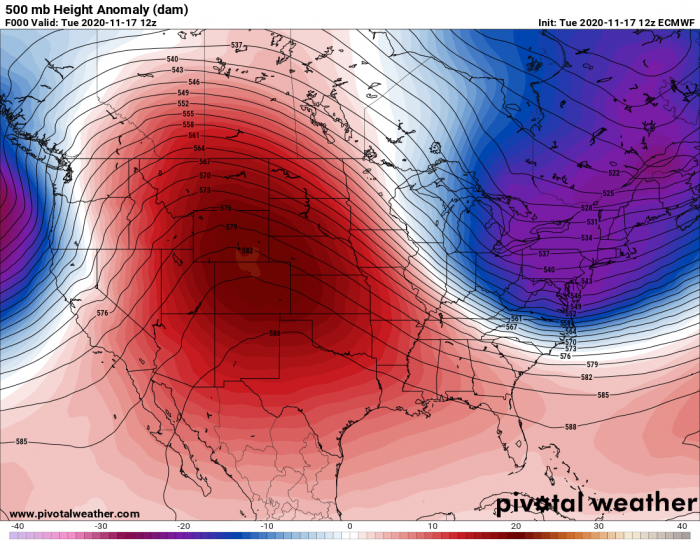 Therefore, the much colder air mass is spreading into the Great Lakes region from the Canadian plains. Temperatures advecting south-southeast into the region are more than 10 °C colder than normal over the region at the 850 mbar level, also helping to develop some convective instability (precipitation) over the lakes. 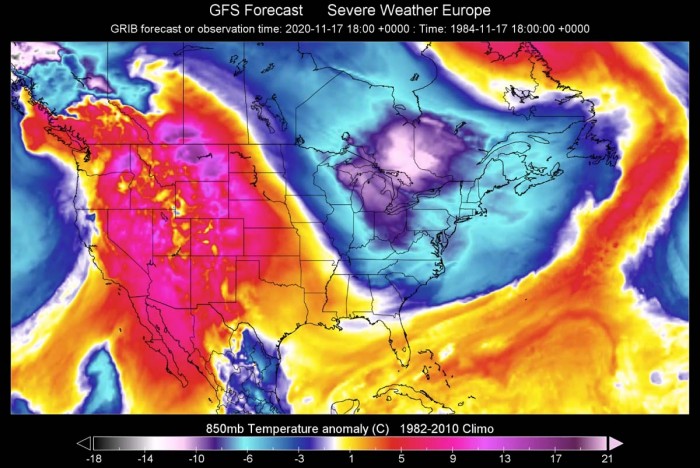 While further west, much warmer weather is pushing into the northern Rockies beneath a strengthening ridge, reaching the Canadian Rockies as well.

The temperature at the 850 mbar level (approximately 1500 m ASL) will be close to 15 °C above the long-term average.

This should help the significant snow melting in the region (e.g. parts of Montana or southern Alberta).

The upper-level ridge additionally strengthens on Wednesday while gradually expanding east-northeast across CONUS. It actually develops a classic omega-blocking pattern.

Such a pattern means we have a strong blocking-high in the middle, surrounded by deep troughs on both sides. 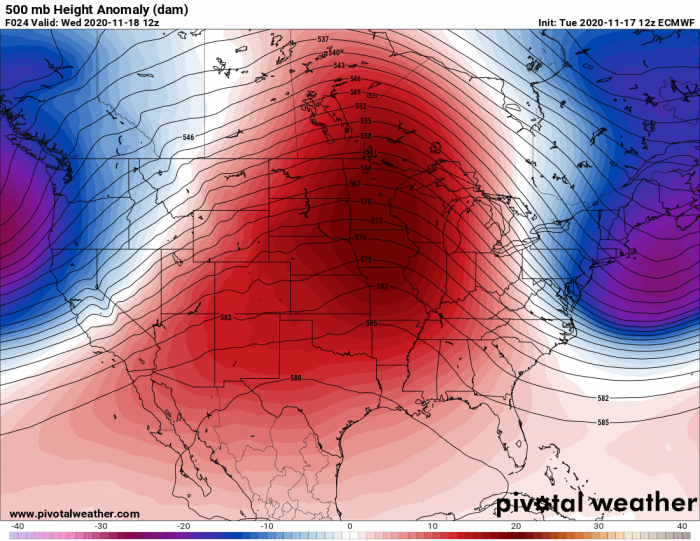 In this case, we have one deep trough over the northern Pacific and another one across the East Coast and the northeast United States.

The result of the easterly trough will be a quite cold weather forecast for Wednesday across the East Coast. Attached is the morning temperature on Wednesday, revealing quite cold temperatures across the northeast states. Notice also there is much warmer temperatures over the Great Lakes. 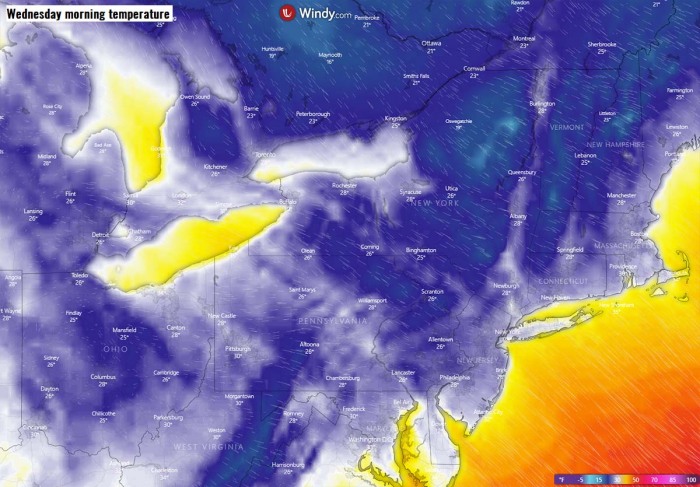 Cold morning temperatures are forecast with the mid-20s across the region, from Ohio valley across the Great Lakes into the East Coast and the northeast United States.

Below freezing also in Boston and New York with high temperatures in the upper.30s to 40s.

Wednesday is also the day when the cold outbreak forecast for the East Coast and the northeast United States will be the most intense. Close to 15 degrees C below the normal temperature is forecast for the 850 mbar level. This level is best to represent the intensity of the cold or warm air mass advection.

As we can see, the warm weather is forecast to be the most significant across the High and Northern Plains, potentially 12-16 °C above the long-term average temperature for mid-November. 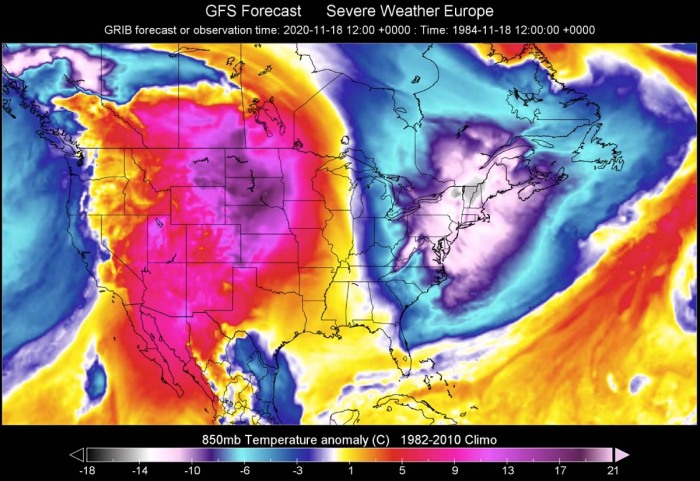 As mentioned above, the warm advection beneath a strong blocking ridge will be quite significant. Temperatures will push into the upper 50s to upper 60s (16-20 °C) across the Great Plaines. 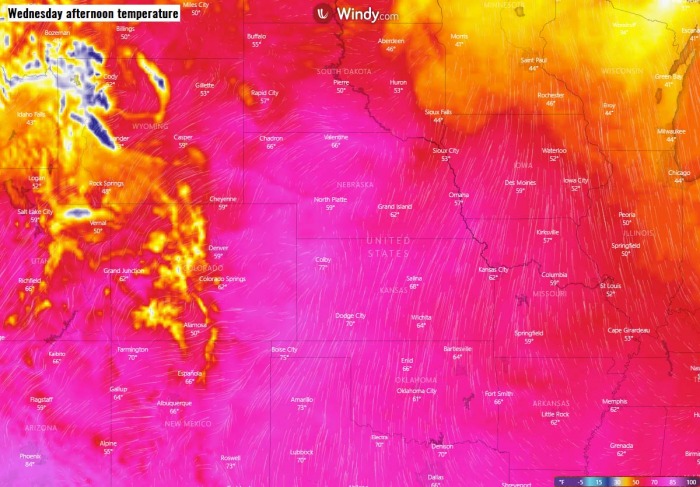 Here is the high-resolution animation of temperature anomaly this week, indicating how significantly colder air mass pushed into the eastern United States but is soon replaced by much warmer weather to the west.

WARM WAVE WILL REPLACE THE COLD

On Thursday, the upper ridge expands further east and pushes away the cold pool associated with the short outbreak. While the upper ridge will be centered over the Great Lakes region, the North Pacific through will also dig into the northwest United States.

The upper-level ridge will, however, dominate the majority of the lower 48. 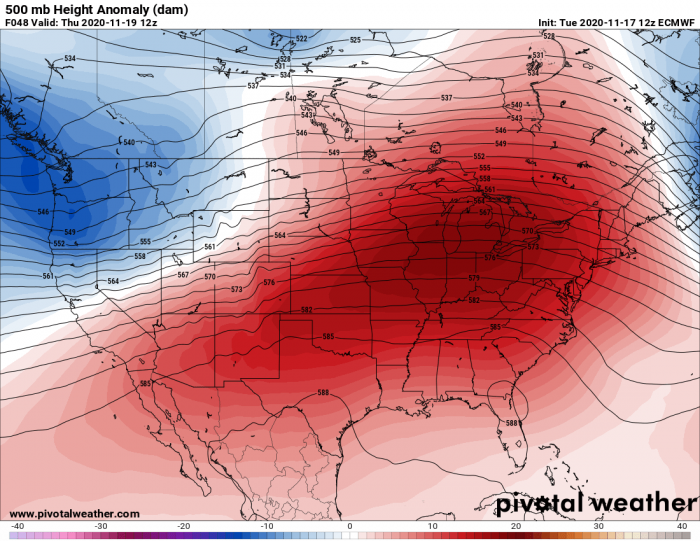 The result of a dominating upper ridge is again best visible over the 850 mbar temperature anomaly charts. The warm advection will be strong, spreading across the Contiguous United States from southwest towards the Great Lakes region.

The cold pool across the northeast United States is forecast to moves into the Northwest Atlantic and gradually vanish towards Friday. 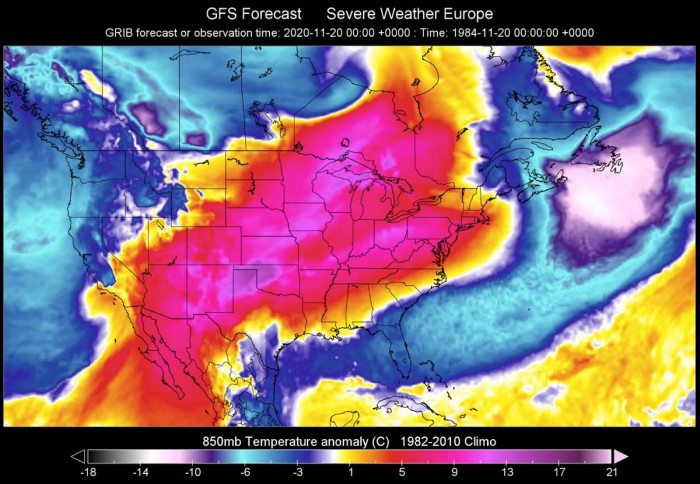 Colder weather, associated with the North Pacific trough, also penetrates into the Northwest and parts of the West Coast of the United States.

Here is the general temperature forecast for Thursday peak time hours with cold weather being pushed back into Canada and to the far east.

While most of the United States will experience a very warm day, with the again mid-60s to mid-70s across the Great Plains and the Midwest. 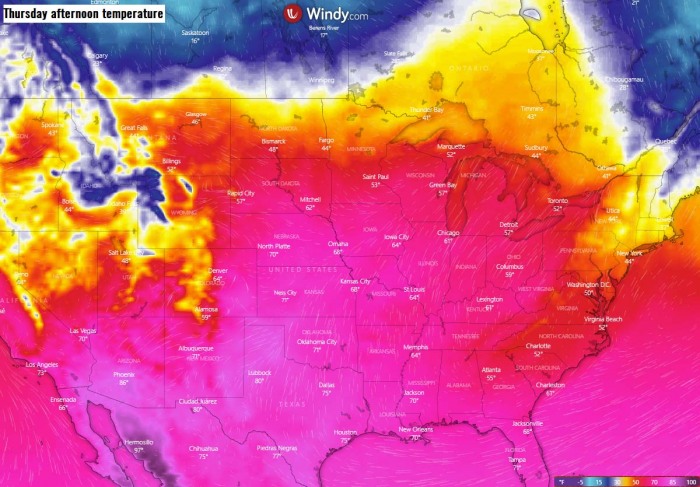 The warm advection under the upper ridge is forecast to be quite strong, so it will also replace the cold weather over the Great Lakes and the East Coast. 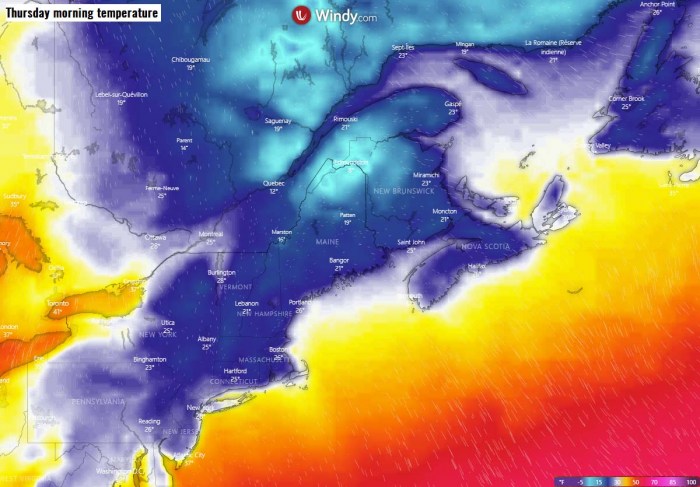 The pattern change across the United States will also result in strong, breezy northwesterly winds across the Great Lakes region. This normally brings favorable conditions for the development of lake-effect snow* events during the winter months.

High-resolution models are the best ones picking the amount of snowfall to occur. The highest amounts of snow are forecast to the east-southeast of the lakes Erie and Ontario.

The lake-effect snow has been triggered on Tuesday and will last for about 36 hours. About 10-15 inches (25-40 cm) of snow will be possible until Thursday. 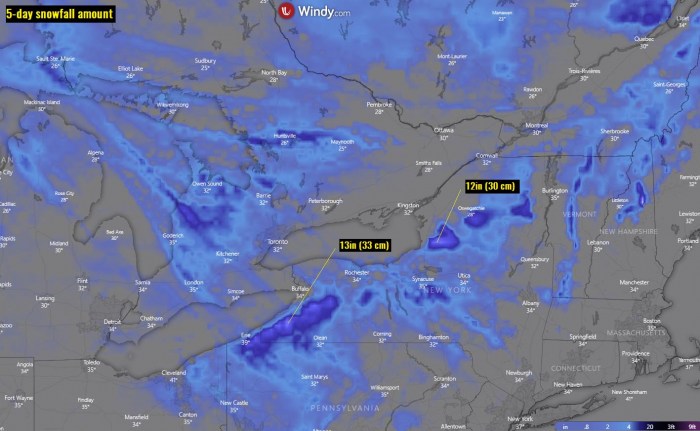 *Lake-effect snow develops when a cold air mass moves across long expanses of warmer lake water. The lower layer of air which is heated up by the lake water picks up the lake moisture and rises up through the colder air above it. The vapor then freezes and is deposited on the leeward (downwind) shores of the lake (or sea).

Typically, with the northwesterly flow patterns, this occurs on the east and southeast sides of the Great Lakes.