While the stratospheric vortex stays strong, the troposphere tries to play a game of its own, attacking the polar circle with high pressure, creating a transitional pattern change, felt mostly over the United States, but also likely bringing some temporary changes into Europe.

BREAKING: Taal Volcano erupts in the Philippines, sending ash up to 15km high!.

The stratospheric polar vortex is currently very strong, and is influencing our weather patterns. It is not easy for the troposphere (lower part of the atmosphere where our weather is) to break out of these chains when trying to do a pattern shift. But, it is possible to occasionally do at least something in transition, when the pressure systems are reorganizing.

We are currently monitoring a strong ridge/high-pressure area in the North Pacific. It will reach very formidable strength and will start to climb towards the polar circle on Tuesday. This ridge, seen below on the image as a strong positive anomaly in the North Pacific, was helping to maintain a very durable weather pattern, with low pressure on the N/W USA and in the North Atlantic. This cooled the NW USA but kept SE USA and Europe relatively warm for this time of year. 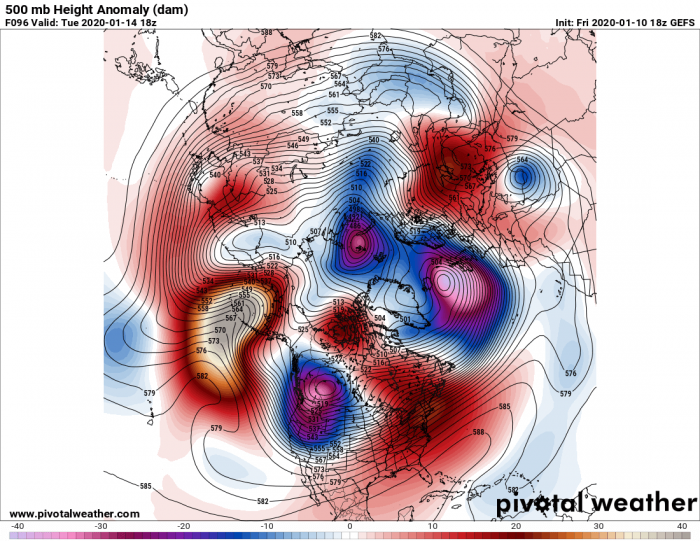 By the end of the week, the ridge will infiltrate into the polar circle, creating room for lower pressure in its wake in the North pacific. This will actually promote warmer southerly flow over the western United States, which will start building a new ridge there, that will connect up with our old ridge in the Polar circle. Such progression also has another effect. As this ridge builds, the pressure starts to drop over E Canada and the eastern United States, as seen on the two images below in blue color. This is basically the core of the tropospheric polar vortex shifting more towards east and south. We can see in the Atlantic, how the lower pressure sits further south, which also helps to build a high-pressure area over the east Atlantic and NW Europe. 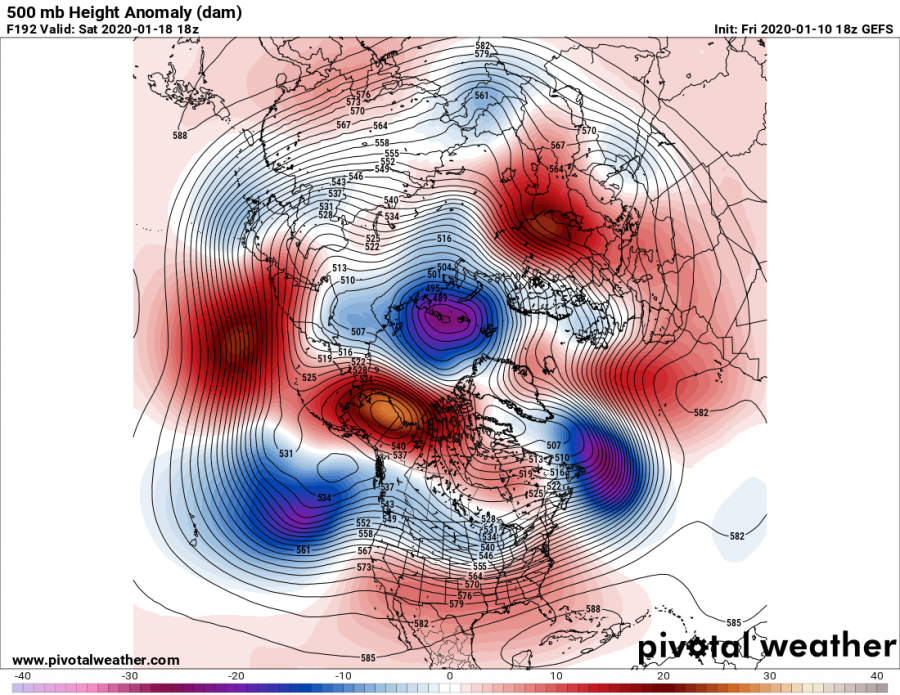 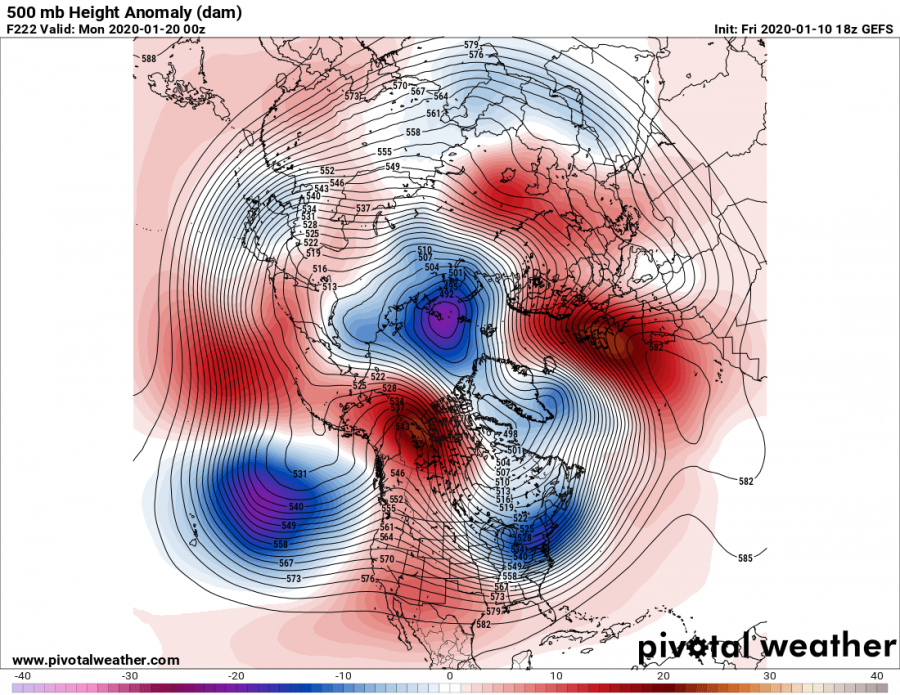 Such a pattern already starts to transport cold air into E/NE USA. This is quite a change compared to the current very warm weather across the eastern parts. 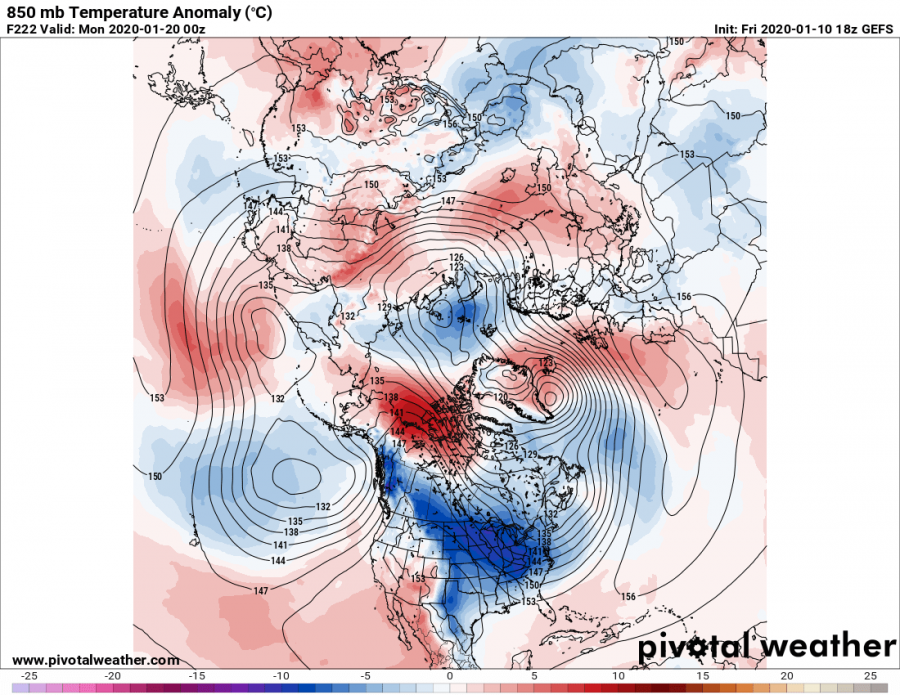 Now, the strong ridge in the Polar circle on the Pacific side, and the strong ridge that builds on the Atlantic side, are strong enough to press onto the tropospheric polar vortex, and actually cut the core apart. It is similar to pushing onto a ballon, as we can see on the two forecasts below, as the polar vortex gets compressed from two sides at different altitudes. The first image shows the two cores of the polar vortex at the 150mb level (~13km), as it gets split apart. The second image shows also the compression and the slight core separation at 30mb level (~22-24km), which is in the mid stratosphere. This will somewhat hinder the strength of the stratospheric polar vortex, but not to any significant amount, as it will stay at above-average strength for now. The tropospheric polar vortex will still remain coupled/linked to the strong stratospheric vortex above, but the “connecting roots” into the troposphere, will somewhat shift, carrying cold air and low pressure with it. 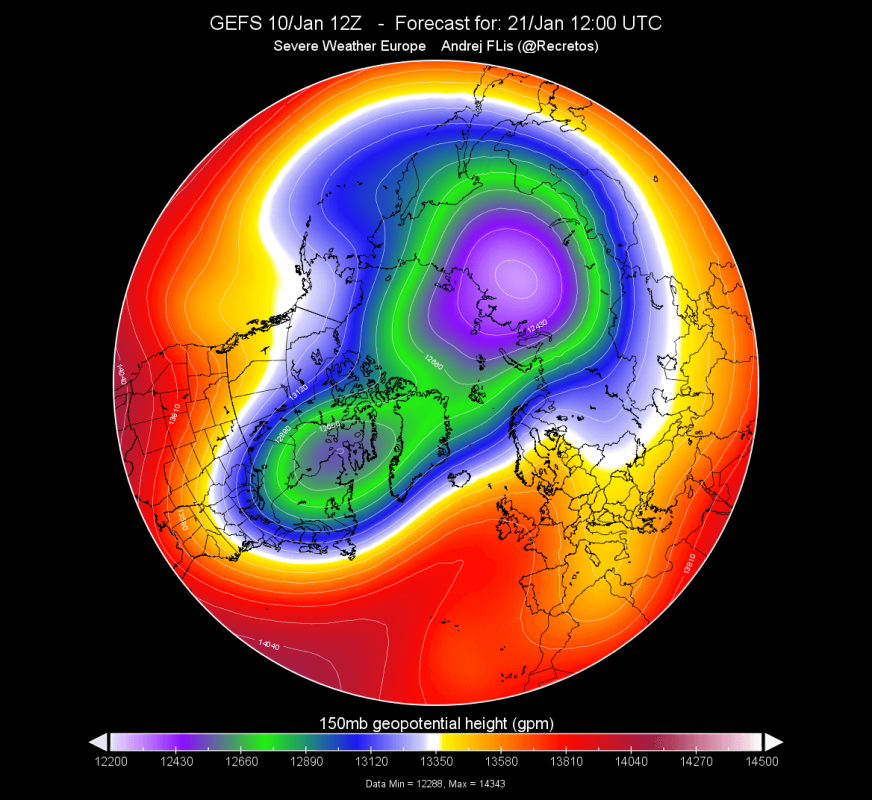 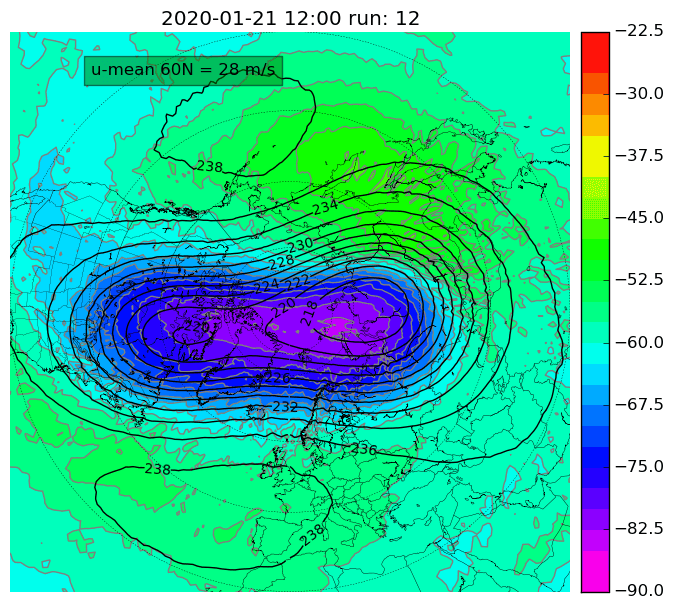 By the middle of that week, low-pressure area is established over the E USA, transporting the colder air from the polar circle and Canada down into the eastern USA. By definition, this is called a cross-polar flow, as the air has a direct path across the polar circle down into the USA. But in the Atlantic, we see the developed high-pressure area, extending towards Scandinavia. At first glance, that does not seem too important for Europe, but it actually promotes some transport of colder air from the N/NE into central Europe. This does not seem like a strong polar blast, but it is relatively cooler air, near-or-at sub-zero at the surface. 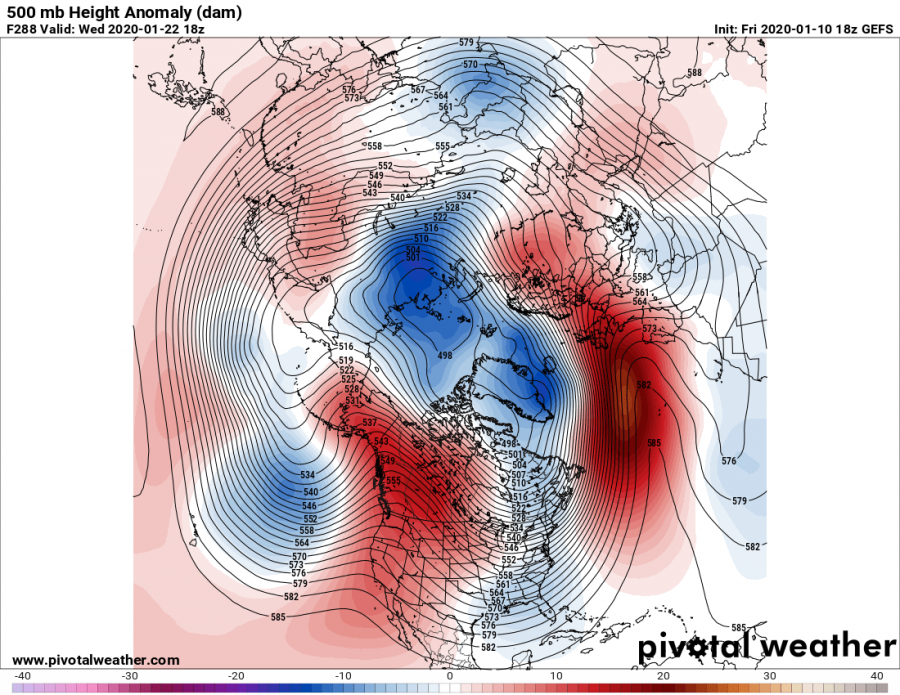 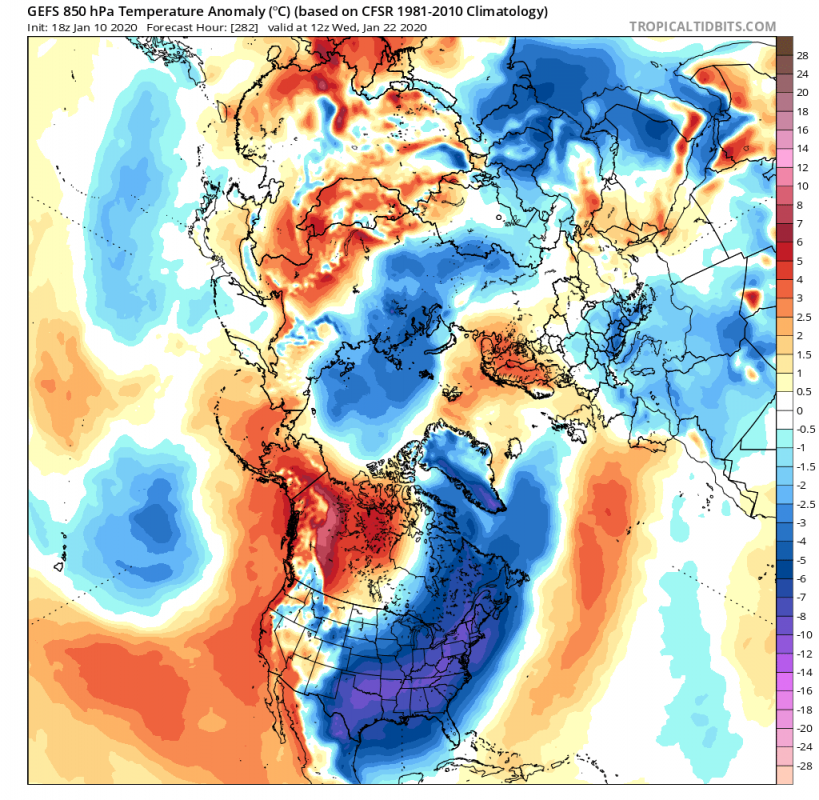 The ridging over the W USA and up in Canada, looks to be fairly stable. That will further enhance the lower pressure in the E USA, enabling at least a few more days of colder weather, as the transport of colder air is enabled by such a pattern. In the Atlantic, we see the high-pressure area also staying in place. This is an interesting situation, as its positioning allows for the low-pressure systems that transit NW Europe, to turn south into mainland Europe, bringing along some colder air. This is yet to be confirmed as we get closer to this period since a lot depends on the stability/strength of the Atlantic high pressure. 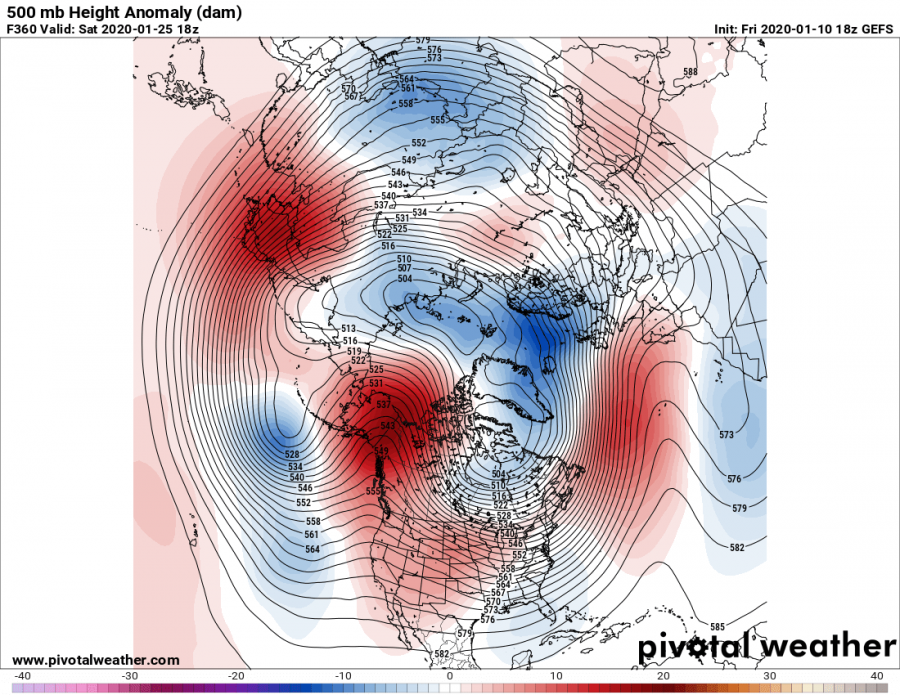 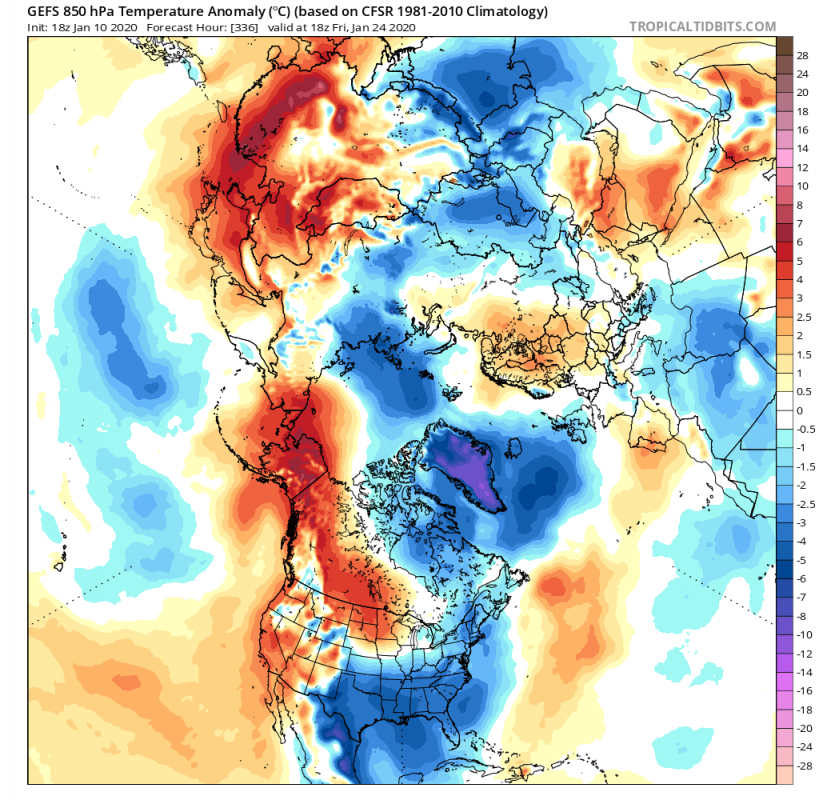 The GEFS model forecast for snow depth, actually shows some snow cover expansion across parts of Europe, where we previously mentioned the likely cold air infusion. We also see snow depth increasing over parts of the central and east USA. This now 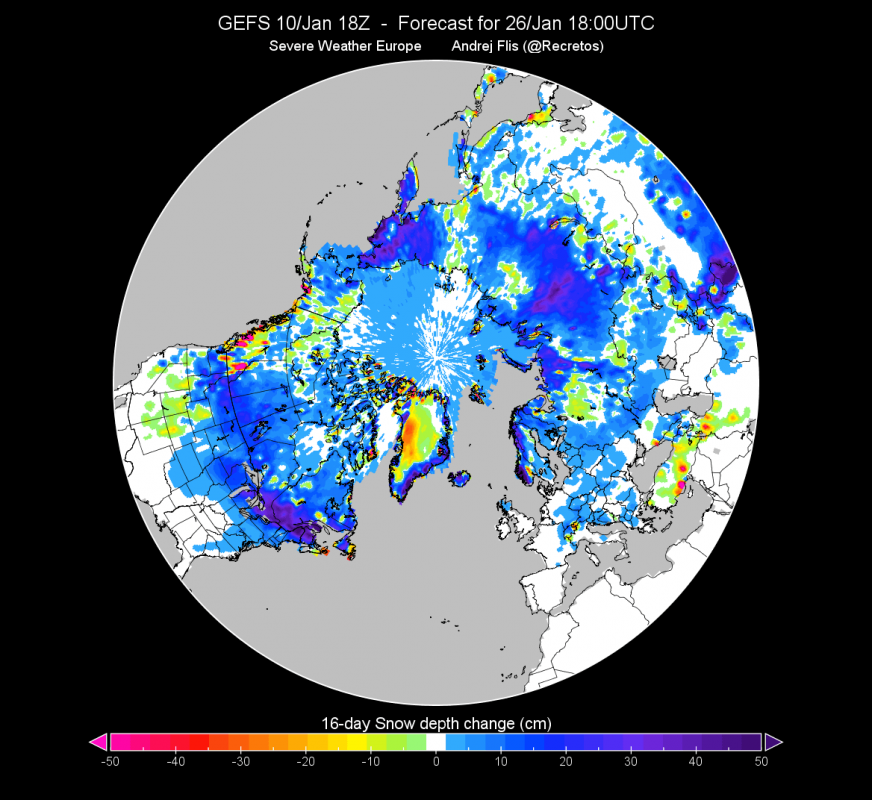 The significance and the shift of the pattern can be seen on the temperature forecast graph. This is temperature at the 850mb level (1.500m altitude), where we most often track cold air mass movements. First graph is for NE USA, the Washington D.C. area, where the change of air mass is very obvious. Going further south, we have the forecast for Atlanta, which is also getting its share of this colder air. Last but not least, we have Zagreb, in Croatia, Central Europe, where we can also see the temperature drop, as the high pressure builds into N/NW Europe. 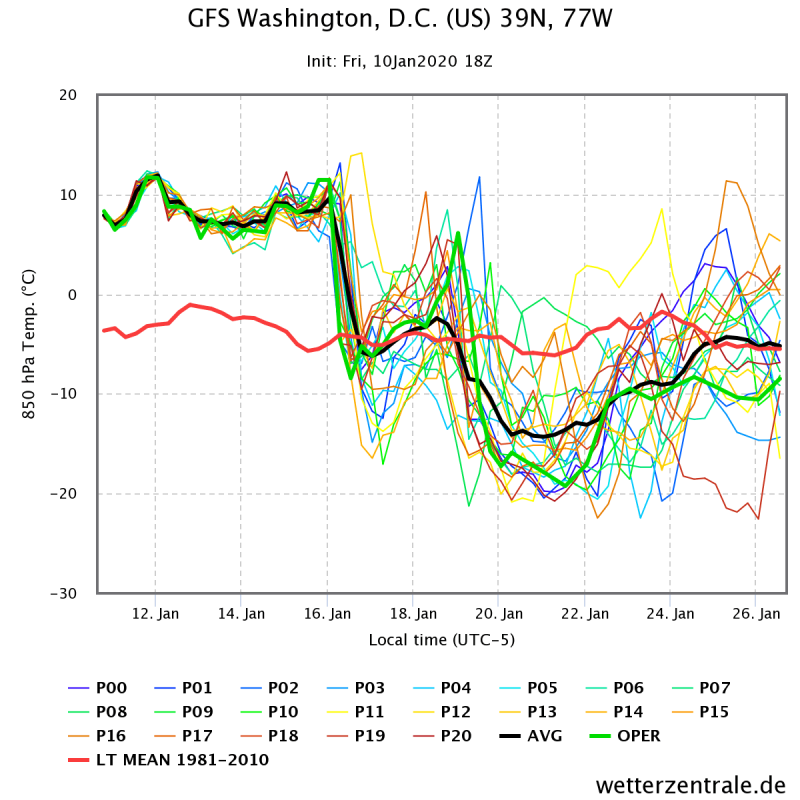 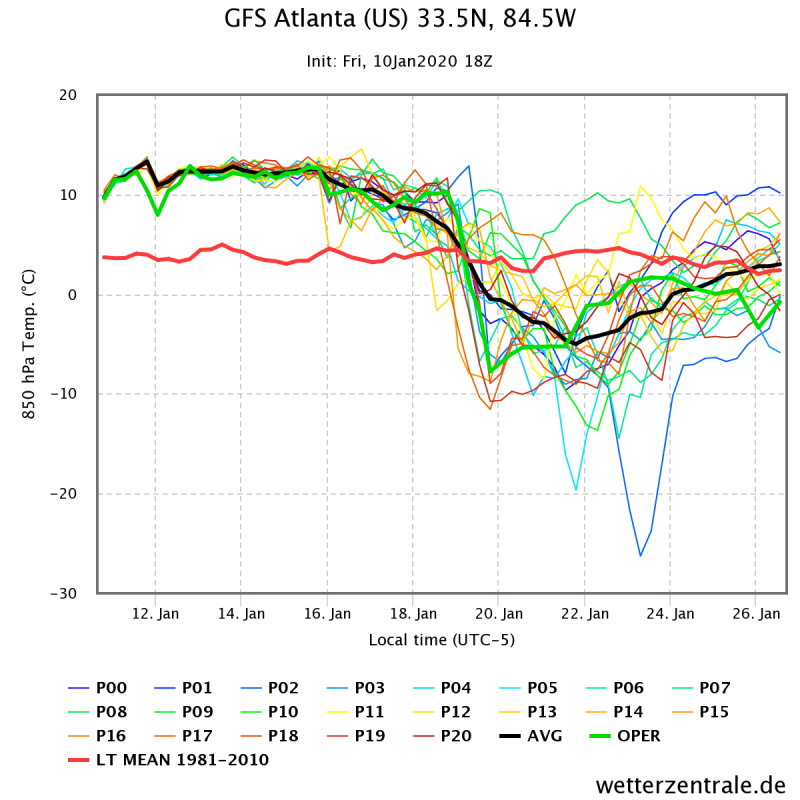 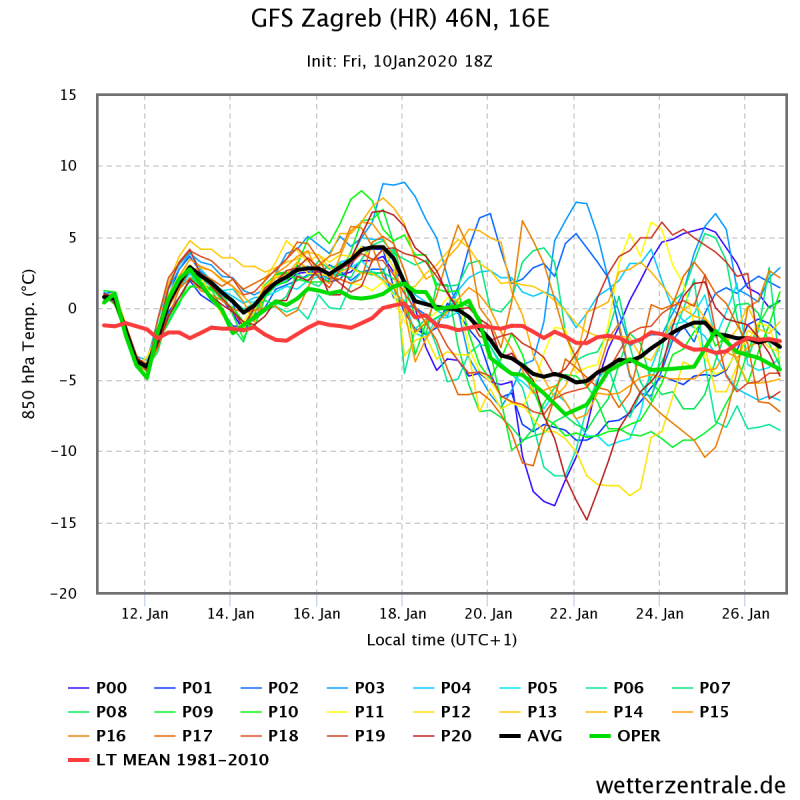 While the North American pattern is more stable and more certain, as the high-pressure systems are quite strong and stable, cooler Europe is still more under question, as the cold air infusion here is much less stable currently and is actually quite dependant on the development of the North American pattern. Current trends are clear for now and bring cooler air into the mainland, but some caution is advised for Europe, since this is looking 10-15 day into the future, on a secondary pattern development, as a response to the primary shifting of the Pacific ridge and the W USA high-pressure building.

We will keep you updated on any important further development. While you wait for more updates, don’t miss the powerful volcanic eruption in the Philippines, as the Taal volcano erupts, creating an apocalyptic scenery: