Many areas in Slovenia reached their coldest April morning over the last 100 years! The official meteorological station Nova vas na Blokah peaked at -20.6 °C which has set a new all-time national record for the month of April since the records began. Numerous extreme cold records also across other parts of central and western Europe, deep freeze and morning frosts have been destructive.

As we expected, the weather models were not wrong this time. An unpreceded extreme cold has verified across many parts of Europe this Wednesday morning, following the significant and historic snow a day before. Snowfall with some accumulation was reported even at the seaside in Slovenia and Croatia islands (Kvarner area). 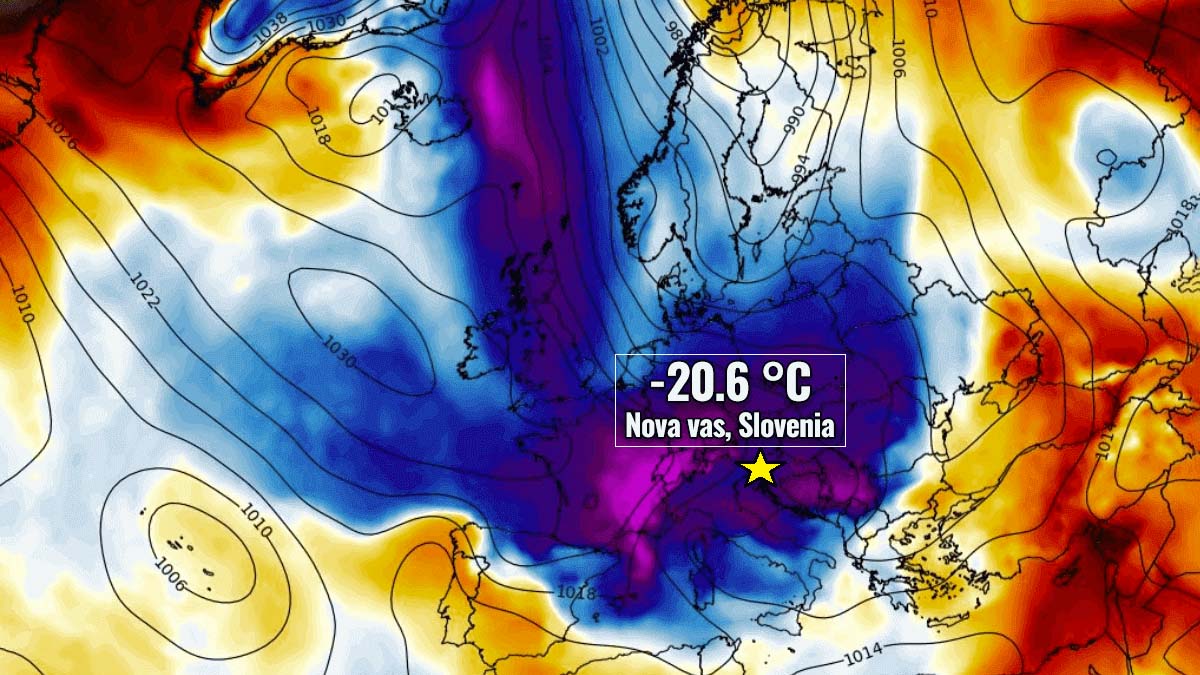 Many areas across the northern Balkans have seen even lower temperatures than they were during the last winter 2020/21. In the case of the Notranjska region in Slovenia (e.g. stations Nova vas na Blokah, Postojna, and Babno Polje) this was the colder morning of the winter.

2021 set a new record having temperatures lower in April than January. Even if it happens in March, it is extremely rare. This is just a plain example of how extremely cold and historic event this event and this morning was for April.

The main reason for these extreme cold records is the Arctic cold air mass that spread across a large part of Europe this week. Clear (no clouds) nights with barely any winds and fresh snow on the ground with dry air mass in the mid-levels are an ideal recipe for extremely cooling in the nighttime hours.

Unfortunately, these temperatures were so extremely low that the ongoing blossoming fruit trees and early growing states of the vegetation were simply burned and destroyed.

Now, another night with very low temperatures is expected, with possibly again going well below -10 °C in many areas. This will give vegetation just another kick and worsen the situation and damage done. Sadly, this is the 5th year among the last 6 years when spring damaging frost occurs. There will also be cold again on Friday morning.

It might be the new normal as the warming periods at the end of winter and in early spring are becoming quite frequent lately. This helps vegetation to start earlier than usual, making it even more vulnerable for any potential cold outbreaks that normally follow at the end of March or within the month of April.

The ongoing Arctic cold blast arrived less than a week after a very warm and locally record-warm period at the final days of March. The chart below (left one), provided by Scott Duncan, reveals some of the most impressive values recorded on the 31st of March. 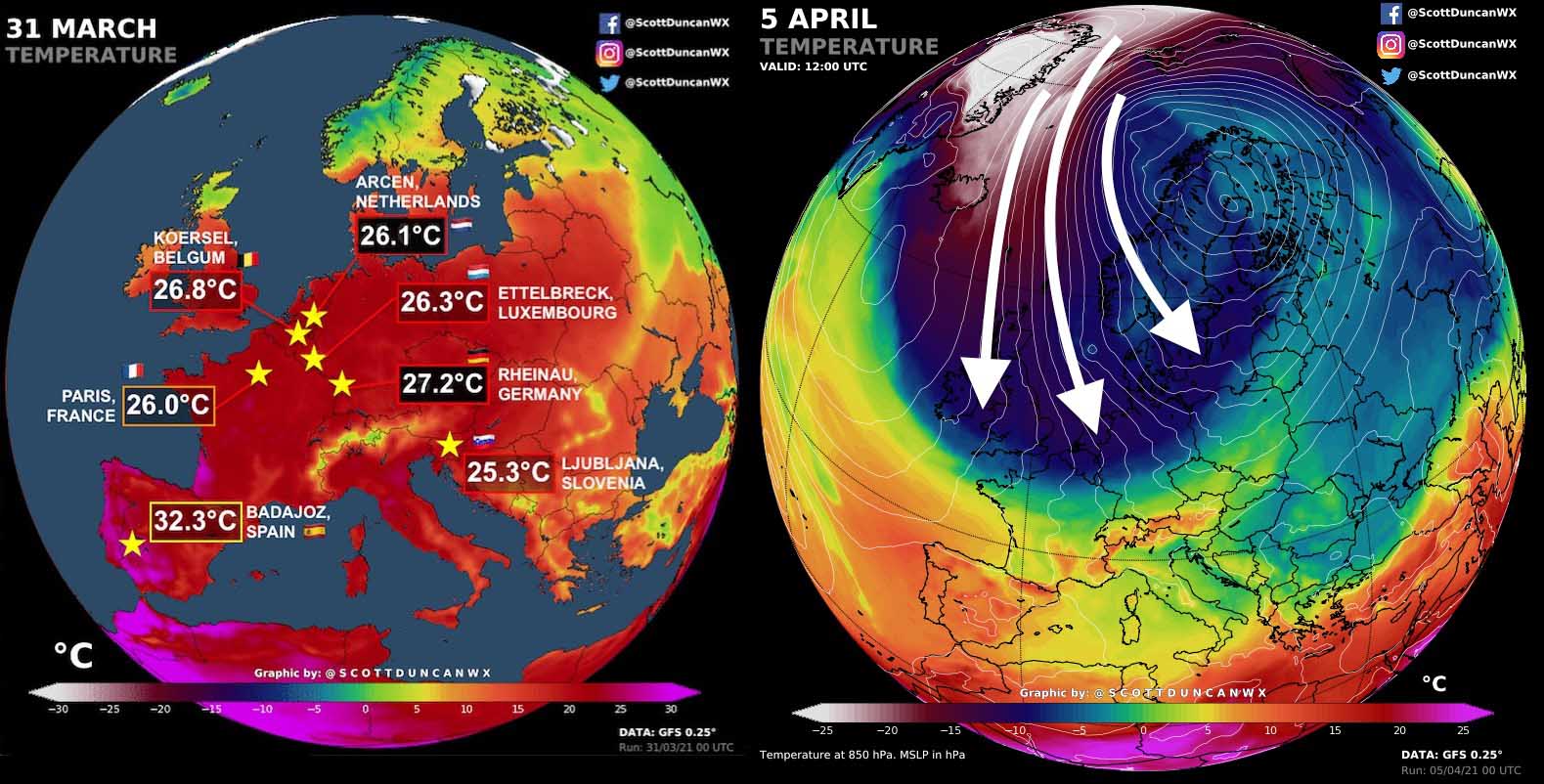 The chart on the right indicates the historic Arctic blast which brought extreme cold over much of Europe just 6 days after, spreading over western Europe on the 5th and then 6th/7th over central Europe, the Balkans, and the Mediterranean. Becoming the historic and record-breaking cold outbreak for April. 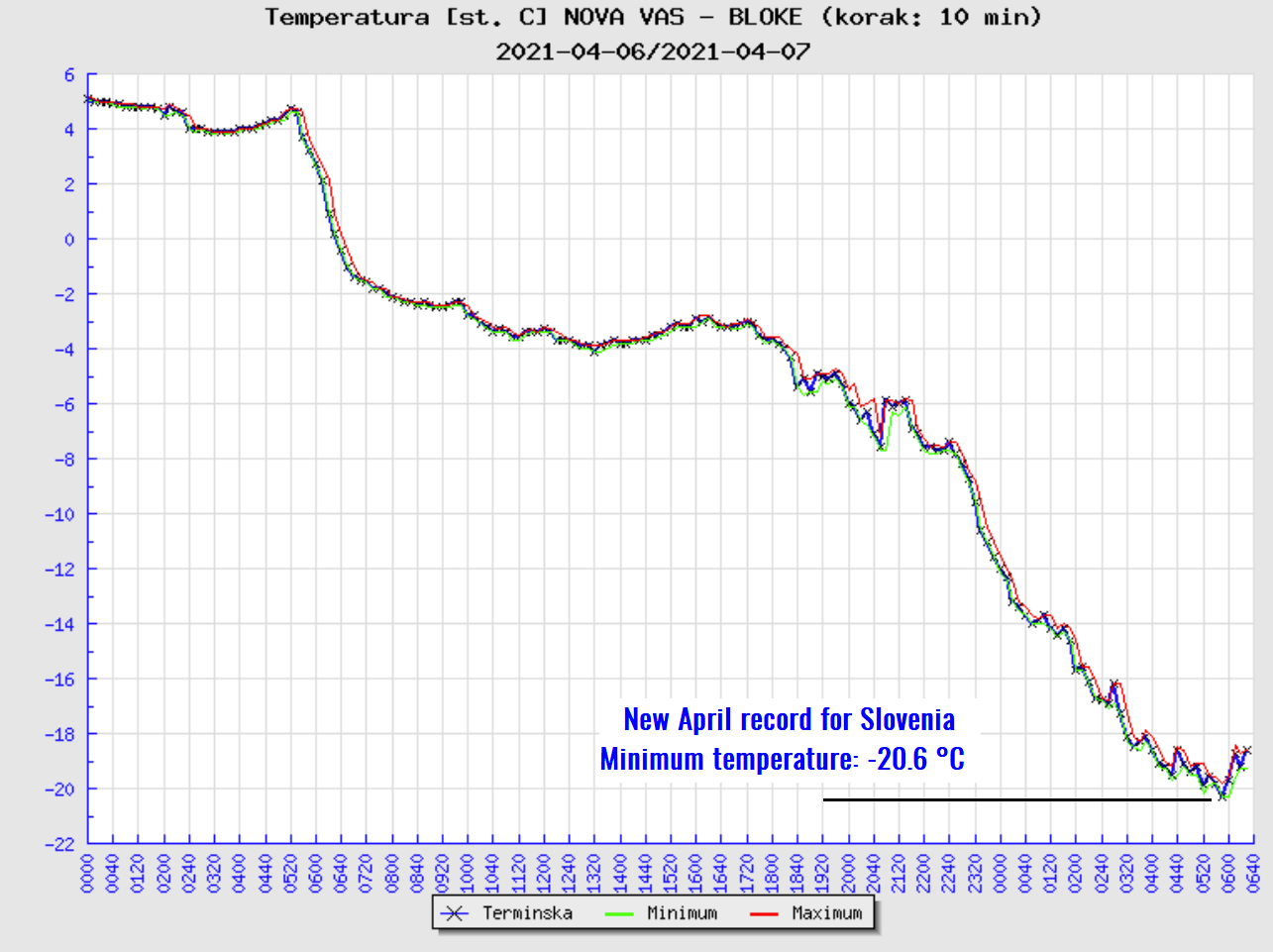 Below are some of the most impressive and record-breaking values this morning: 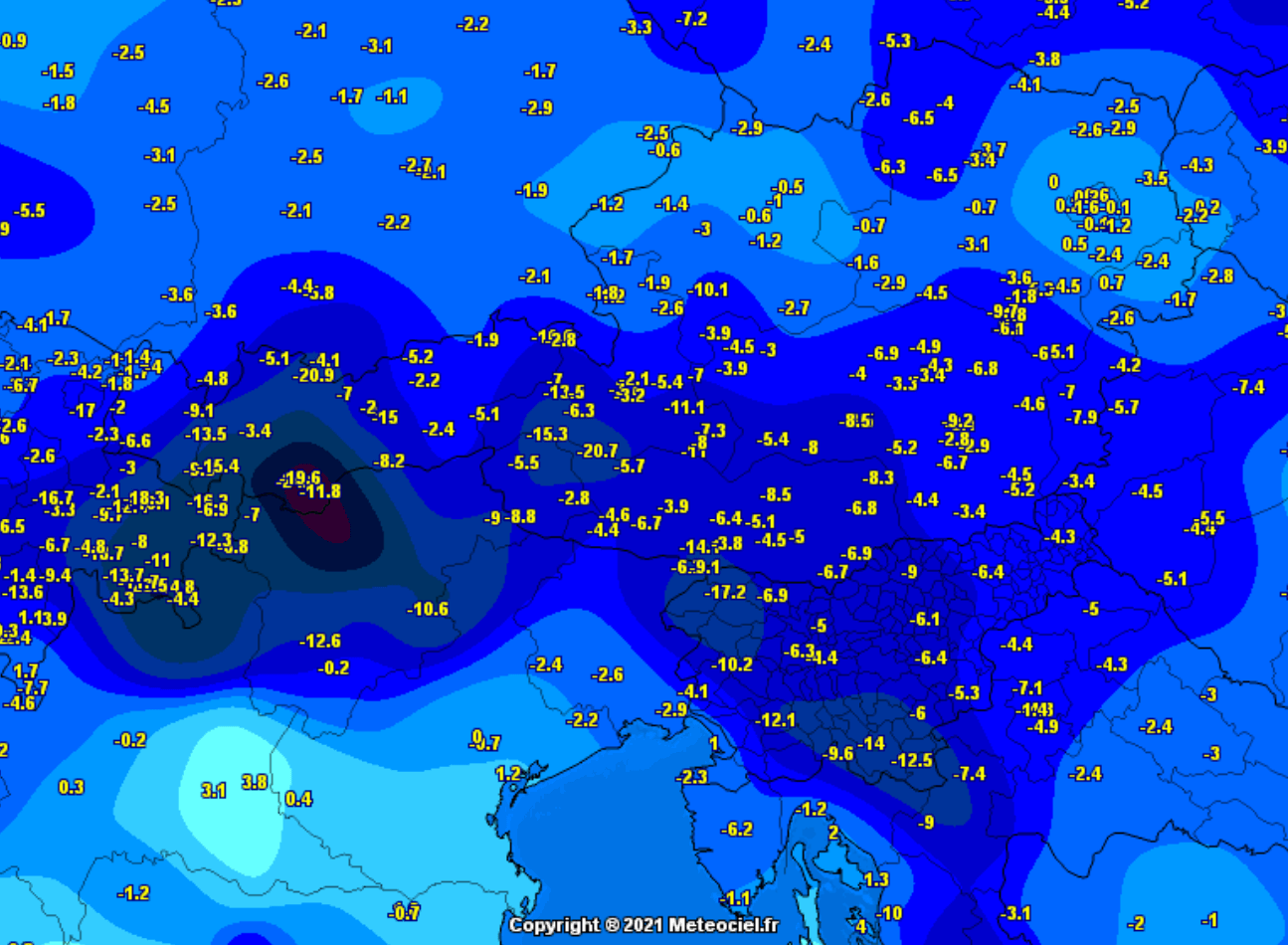 There was another record of -26.1 °C recorded with an unofficial weather station in the village Retje near Loški Potok. The station is, however, not a part of the national meteorological station network, so the data are unofficial. But the records are still made with the proper equipment and WMO standards, so this is comparable to the official records by the national meteorological agency (ARSO).

Similar to the territory of Slovenia, also Croatia experienced extreme cold this morning. Although the clouds remaining with the front departing last night, the northern parts were badly hit with very low temperatures and indeed lead to a destructive frost.

The most impressive values in the lowlands can be seen below:

All these areas and many others have low elevation, so the early spring greenage and blossoming trees were ongoing. So the damage done to the vegetation is significant to complete. 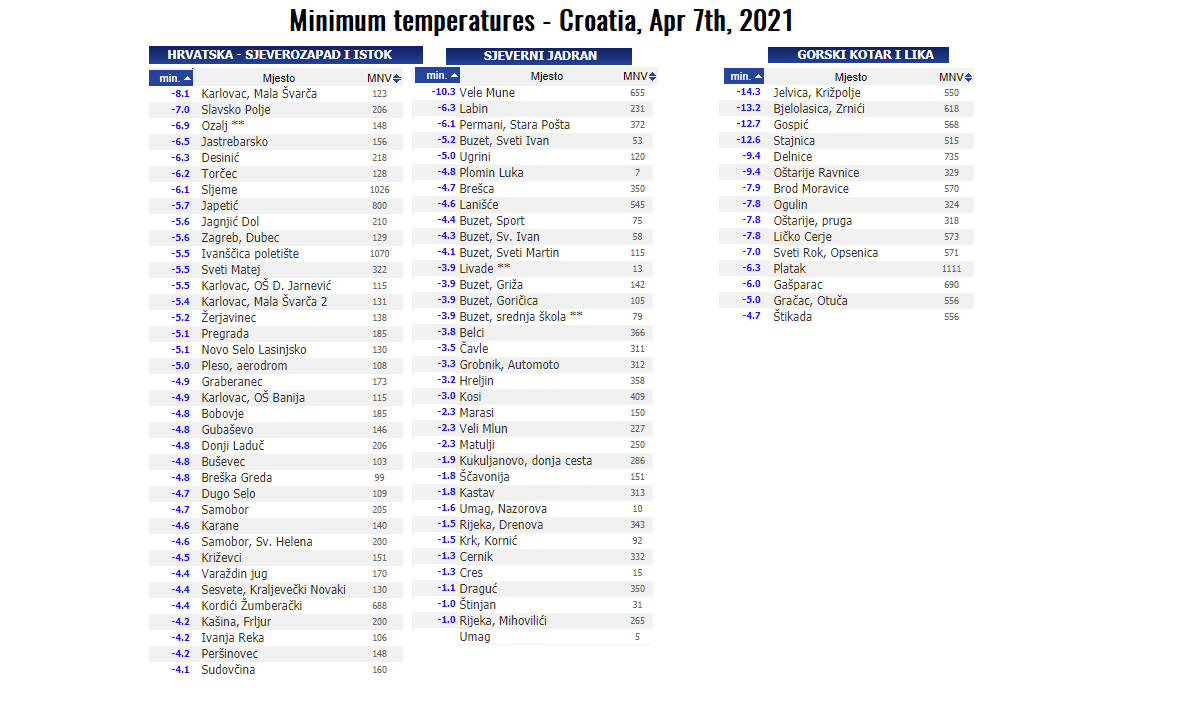 Also, a bit higher places over the Gorski Kotar and Lika plateau pushed the morning temperatures extremely low, even well below -10 °C. Thanks to fresh snow and clear skies most of the night.

What is interesting about this cold blast over Europe this time is that it has affected a large part of the continent and the origin of the air mass is both the Arctic and maritime. Usually, these extreme cold events in spring happen with drier, continental air mass. The cold blast first spread over western Europe and then continued towards the central parts of Europe.

This Wednesday morning, it was very cold across France and the UK. An impressive cold with the lowest temperatures pushing 5 to 9 °C below freezing in eastern, central, and southern parts of France. Also over southern Germany.

Quite a cold morning also developed across England and Scotland. Benson (England) hit an impressive -7.5 °C this morning, it was -6.8 °C in Great Dun Fell, -6.2 °C in Shap, and -5.3 °C in Pershore. Attached below are temperatures this morning (left chart) and tabular data for the lowest temperatures for Apr 6th and 7th. 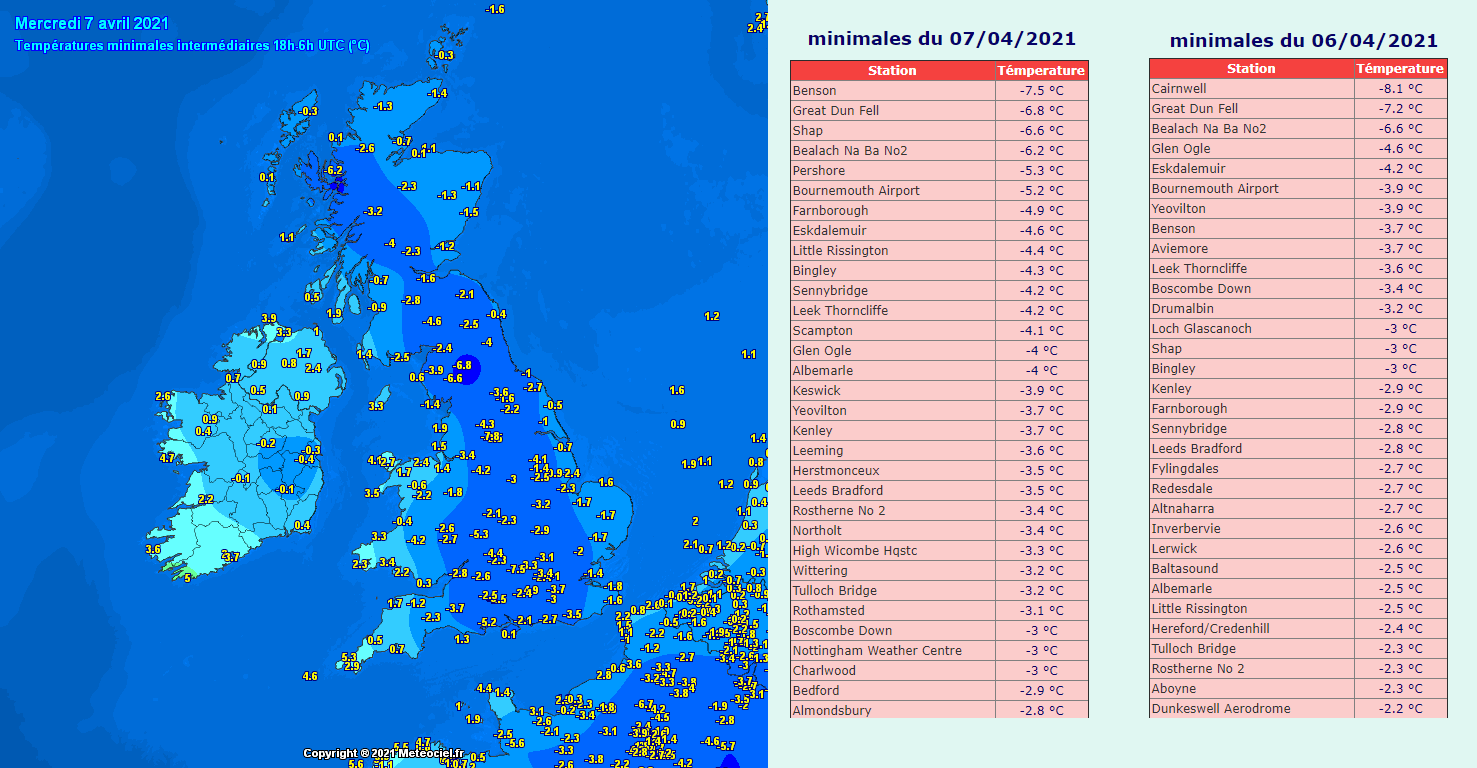 Very low temperatures with record cold values were already reported across France on Tuesday, thanks to the core of the cold pool spreading behind the Arctic front. Numerous weather stations have set the all-time lowest temperature records for April, those can be seen on the right side of the chart in the table. 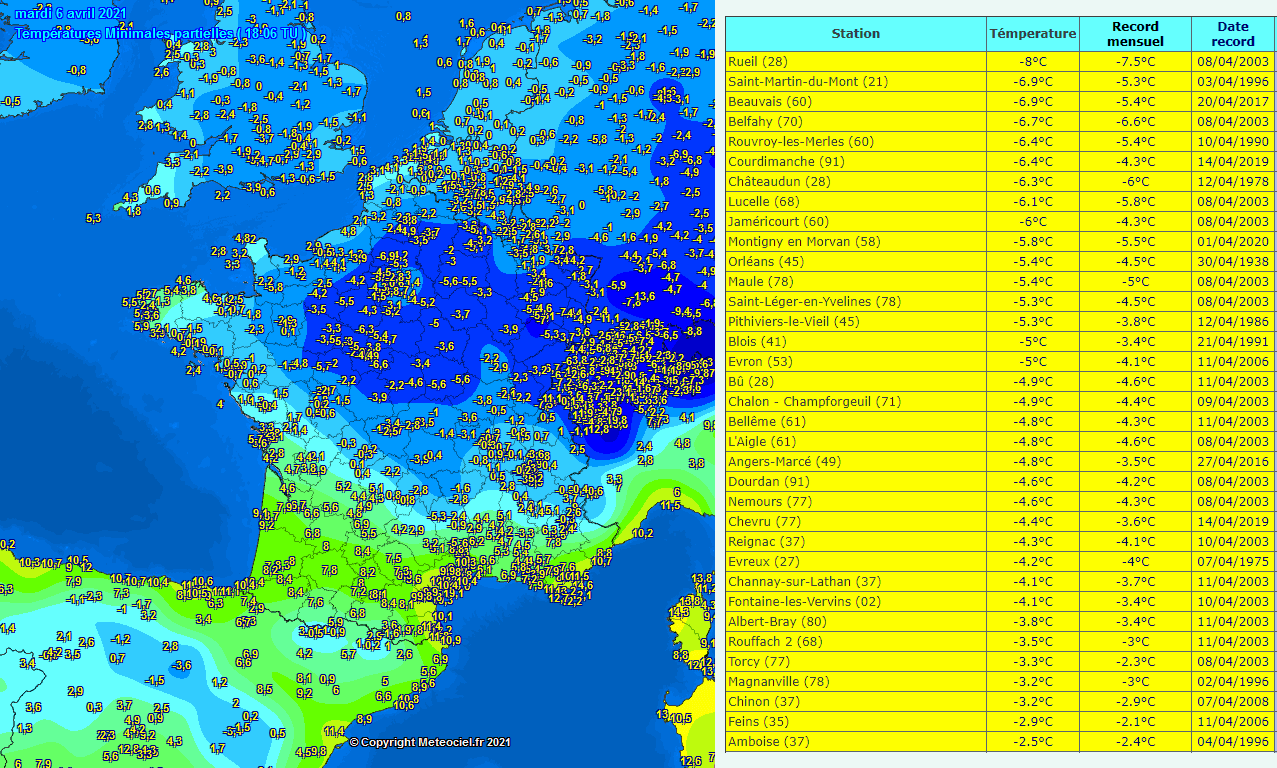 It appears likely that the upcoming Wednesday night and Thursday morning will bring another day with extremely low temperatures. Thanks to the improved mid-level conditions, the general air mass is much drier, winds have weakened and snow remains on the ground or just around the hills and mountains around the valleys. The deep upper core with nearly -40 °C at 500 mbar height is just passing the northern Balkans with unstable weather. 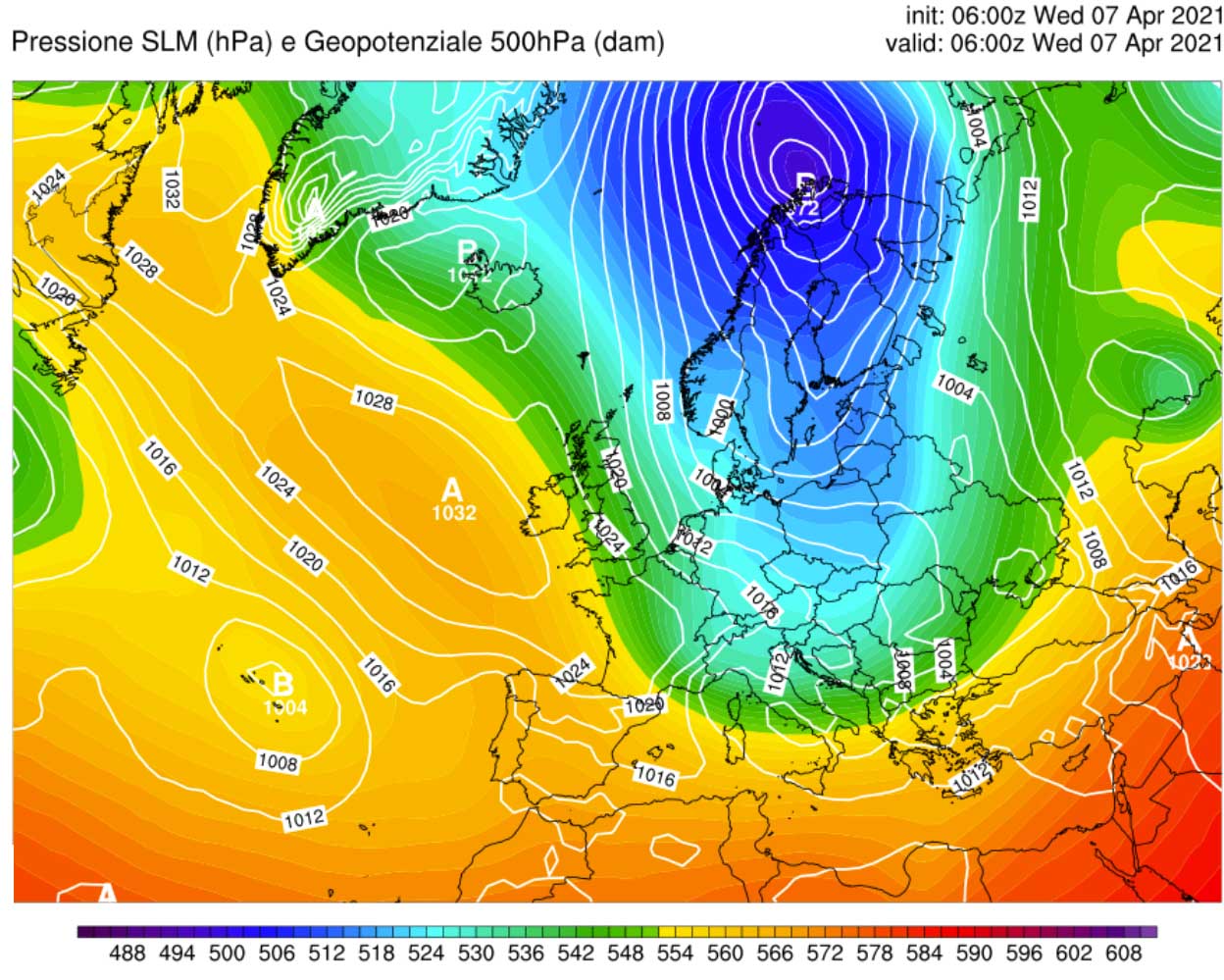 Therefore we can expect it will be yet another rapid cooling overnight, with the potential for some areas to reach even lower temperatures than they experienced this Tuesday morning. The dewpoint temperatures are even below -10 °C in many areas, snow showers and even thunderstorms are ongoing in very cold air mass.

One would say this is quite typical for April. Indeed, but not so cold. We are in for another very cold night and even worse damage to the growing vegetation, which has been severely damaged or even totaled already this morning. It will also be again quite cold over Germany, Benelux, and France. 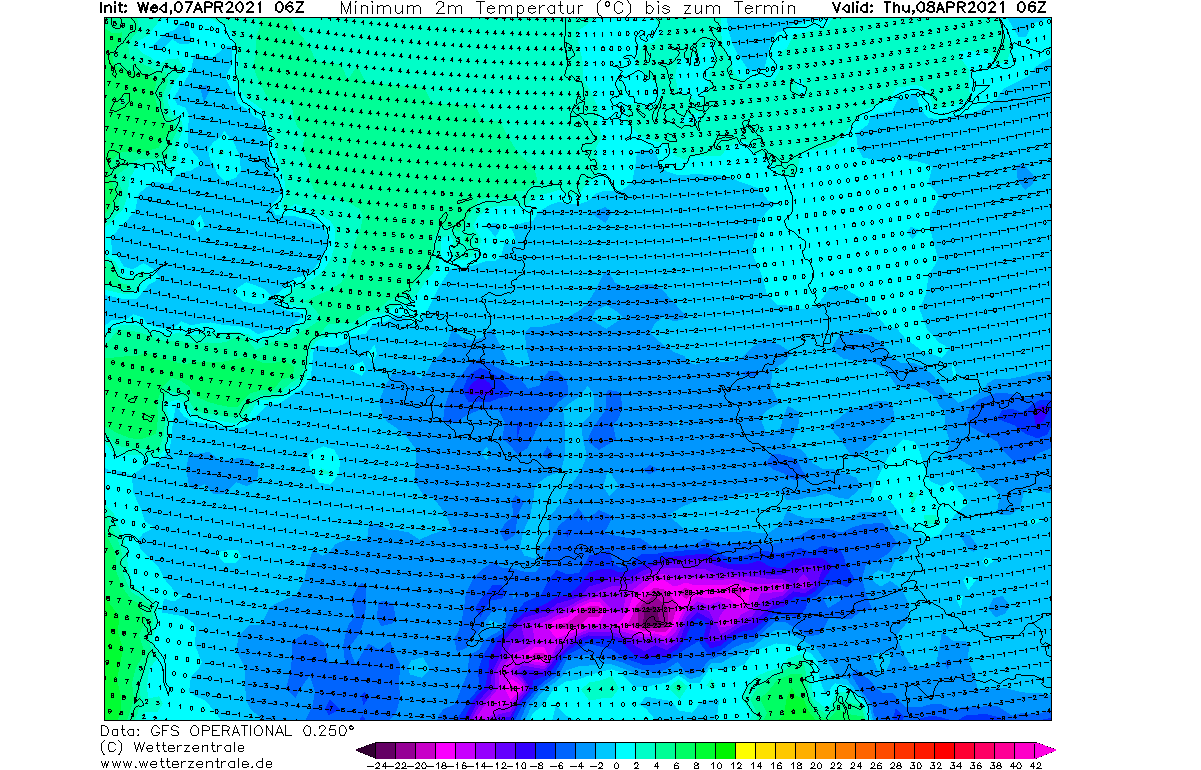 The most intense cold will likely occur over the Balkan peninsula, especially where the snow has accumulated last night. E.g. over western and northern Croatia, Slovenia, Bosnia, and southern Serbia. As well as over parts of Romania, Albania, North Macedonia, and western Bulgaria.

The temperature will very likely slip into below -10 °C in some areas, potentially even close to or below -15 °C over the most prone areas for extreme cold mornings (closed valleys with snow). 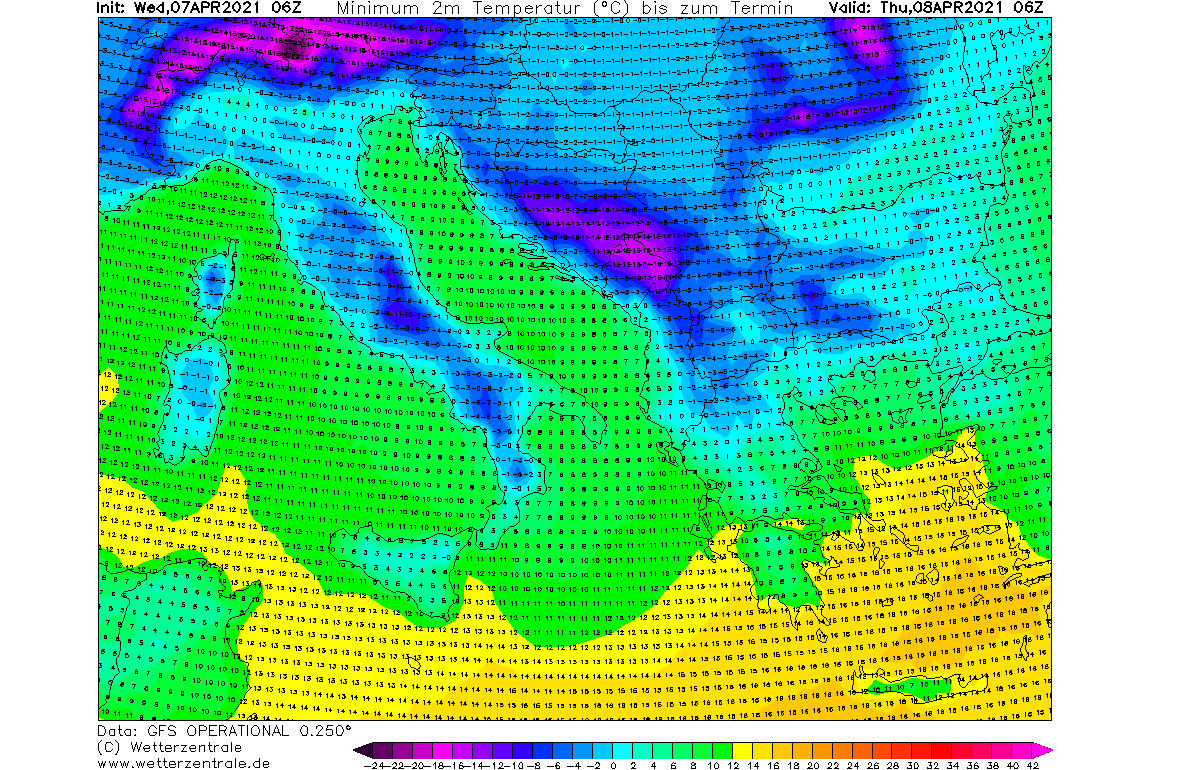