An exceptional, more than 100 mbar pressure difference between Greenland and northern Europe on Sunday has released a massive Arctic cold blast towards continental Europe. The sharp Arctic front is racing south and will result in intense snow with blizzard conditions across Slovenia and Croatia on Tuesday. Then, destructive and widespread frost to vulnerable vegetation is expected across central Europe.

A very dramatic weather pattern change is underway this Easter Monday as a deep Arctic cold-core is moving south across western and northern Europe. The first impact is over the UK and Ireland, then the core will spread towards central Europe and the Mediterranean tonight into mid-week days. 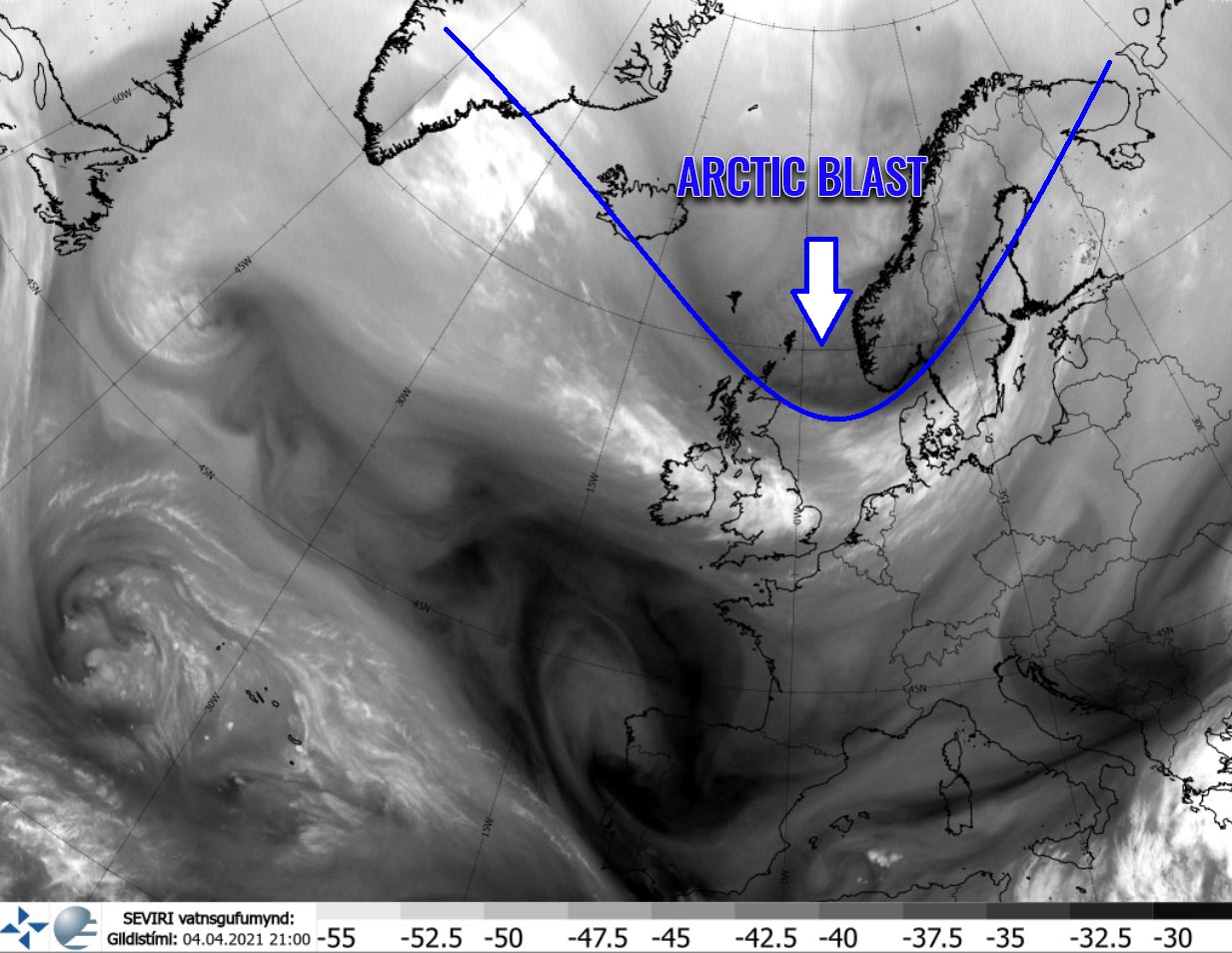 The progress of the trough is nicely visible on the satellite imagery, especially with the water vapor and airmass channels, indicating a sharp change in the air mass behind the Arctic cold front.

Now, this significant change will bring a general weather pattern flip over Europe this week. A much colder, and locally damaging frosty weather is coming up. Even winter precipitation with lots of snow is locally expected. Thanks to the powerful Arctic cold blast, a large part of the Europan continent will experience very cold days and temperatures could challenge some historic records. 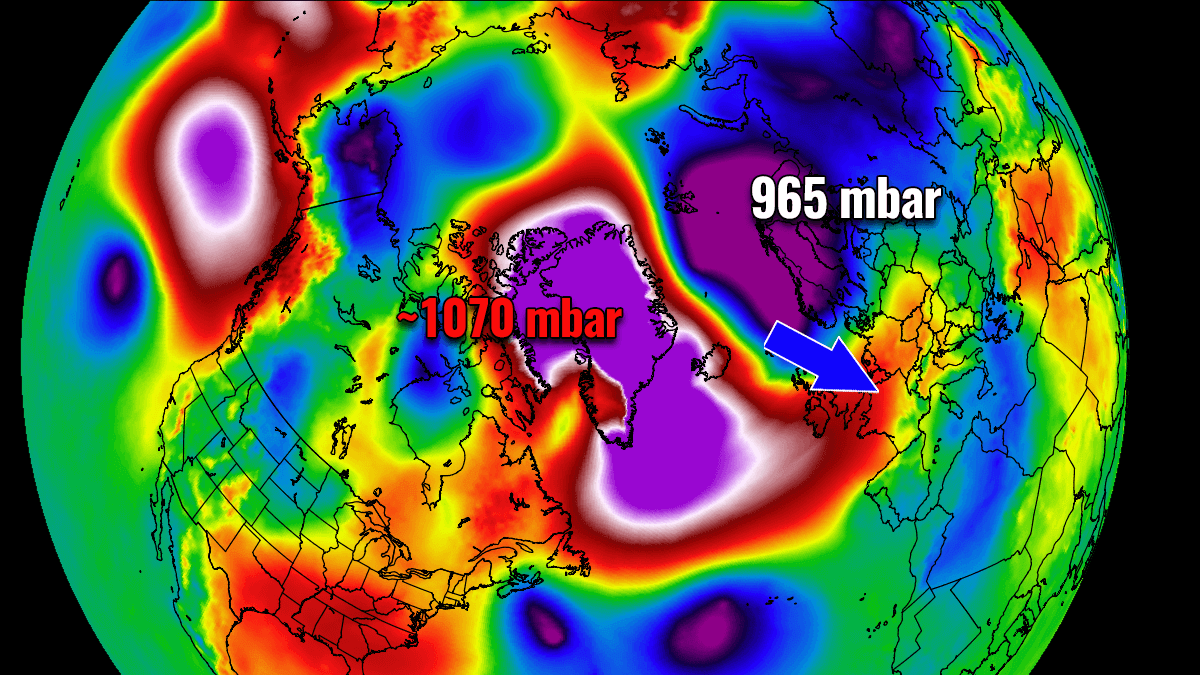 What actually quite often happens in early April are strong cold air mass intrusions, although temperatures are generally becoming warmer. It results in vegetation stages to start growing in many parts of Europe, including the blossoming fruit trees. Therefore, any cold air mass outbreaks are very dangerous events for this vulnerable vegetation.

Very low morning temperatures that follow after these cold outbreaks, cause significant damage to flowering fruit trees and other vegetation. As we can imagine it becomes very sensitive with temperatures just a few degrees below freezing. If temperatures during an Arctic cold blast like the one this week, the result could be potentially catastrophic. What is the latest model guidance trending, this event will be of historic proportions in some parts.

Let’s take a look at the temperature animation of the Arctic cold blast spreading across Europe over the next few days. A much colder than normal temperatures are spreading across western Europe, then reaching the Alps, the Balkan peninsula, and most of the Mediterranean on Tuesday into Wednesday. A very dramatic and locally extreme temperature change/anomaly will develop.

See below for further details on this pattern change evolution. The progress of the unusually Arctic cold blast for April behind the sharp surface cold front brings a significant snowstorm over central Europe and the Balkans on Tuesday first. But then, the real threat develops – an extremely high potential for destructive morning frost for vegetation across a large part of Europe from Tuesday through Friday.

The general weather pattern change began this past weekend with an exceptional pressure difference between the blocking High over Greenland and deep Low forming over northern Europe. The estimated pressure over central Greenland was around 1075 mbar (about 1065 mbar per ECMWF model and 1080+ mbar per GFS model) while around 968 mbar was observed near Lofoten, Norway. 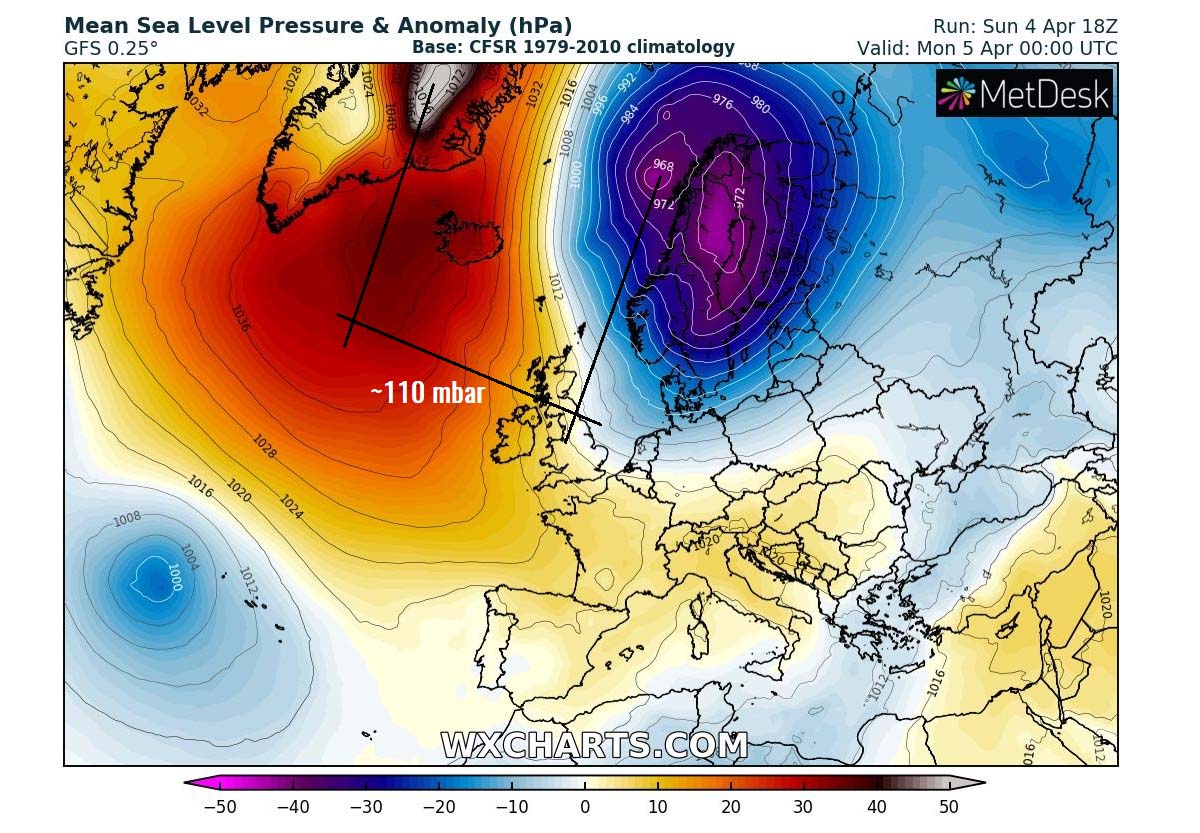 This is a very extreme difference in the atmospheric pressure, around 110 mbar between both large-scale systems. Indeed the distance of almost 2000 km, but the important feature is the well-defined Arctic cold-core surging south with a powerful jet stream in the middle. This hints that something very significant is shaping up across the European continent for the upcoming days.

The Easter Sunday, April 4th 12z ascent of the weather balloon from the Keflavík airport, Iceland was a great example of a distinct layer of the stratospheric temperature profile. We can see how dry is the air mass in the mid-levels, increasing with altitude. This is a textbook intrusion of the stratospheric air into the middle of the troposphere. Notice also how intense the winds are within the northwesterly jet stream (wind barbs on the far right).

In response to the shift in the general upper-level pattern over the Arctic region, explosive cyclogenesis took place over the Greenland Sea on Sunday. Together with a powerful High over Greenland, it released a strong Arctic cold air mass towards northern and western Europe on Easter Sunday. The leading edge – the Arctic front, and much colder air mass in its wake are now racing further south towards central Europe and the Alps. 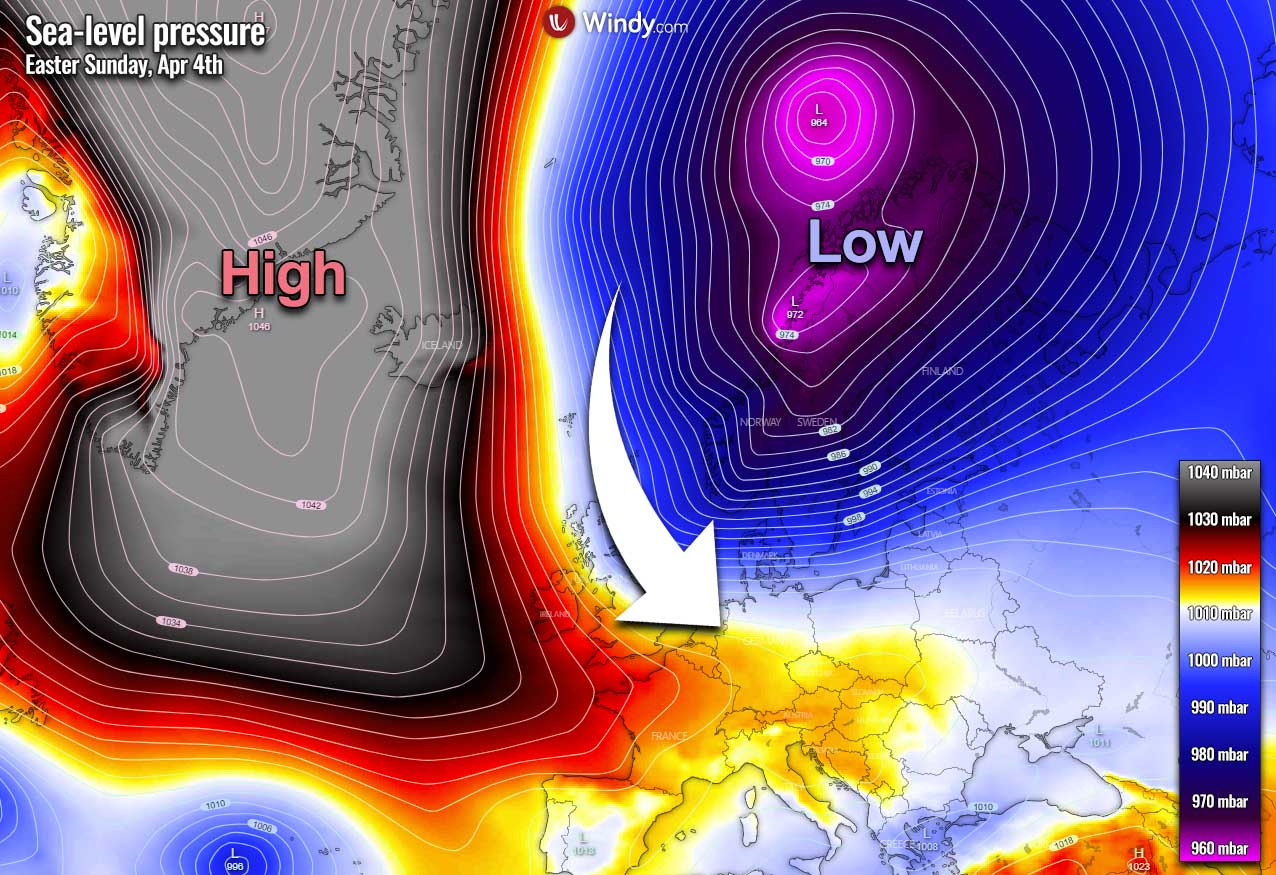 A snowstorm with blizzard conditions impacted western Norway on Sunday. The much colder air mass in the wake of the Arctic front is resulting in scattered snow squalls across the eastern UK and the North Sea, spreading into Denmark, Germany, and Benelux this Monday through Tuesday.

Today, an impressive dipole pattern is developing over Europe with a strong upper-level High over the North Atlantic and Greenland against a very deep upper cold-core placed over northern Europe to its east. With such a position on these two large-scale features, a deep Arctic cold has an open path to continue further south across the European continent.

A strong jet stream in between the two is supporting persistent cold advection towards central Europe which hints at a very concerning pattern position. These features point to nothing else than a historic Arctic cold air mass for Europe in April. 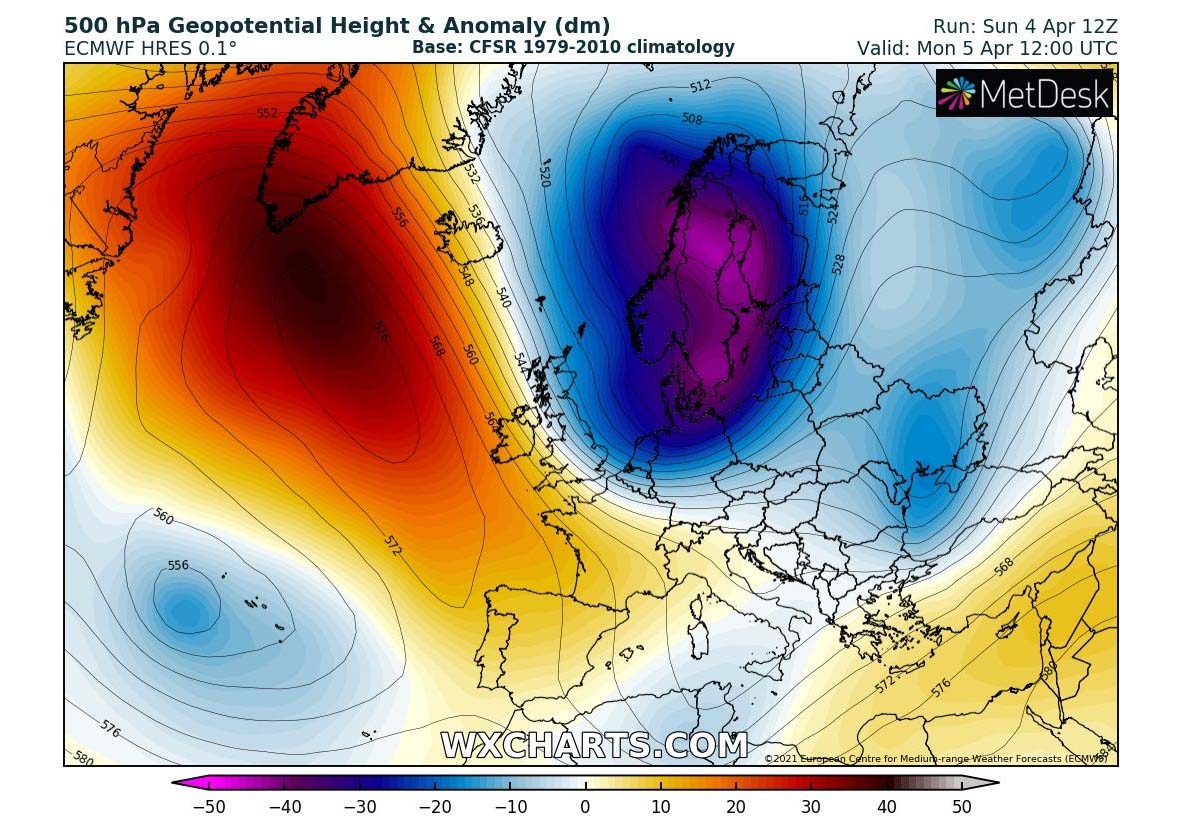 We definitely do not want to see this in early spring when vegetation starts and fruit trees are flowering. Unfortunately, once again we will be facing an extremely cold period with no chance to change the pattern anymore. Parts of Europe are in for a destructive cold and frosty mornings this week.

The Arctic cold front continues rapidly moving south and will reach the Alps by the evening hours. While the cold intrusion enters the north Mediterranean region, a deep secondary surface low develops, slows down the front, and increases the precipitation for the Alps and northern Balkan peninsula.

With such a strong Arctic cold air mass arrival, the environmental conditions will soon become wintery tonight. While heavy rain will be ongoing, it will soon snow across a large part of the North Adriatic region and northern Balkans. The latest model runs hint at a very impressive snow event over northeast Italy, western Slovenia, and Croatia. 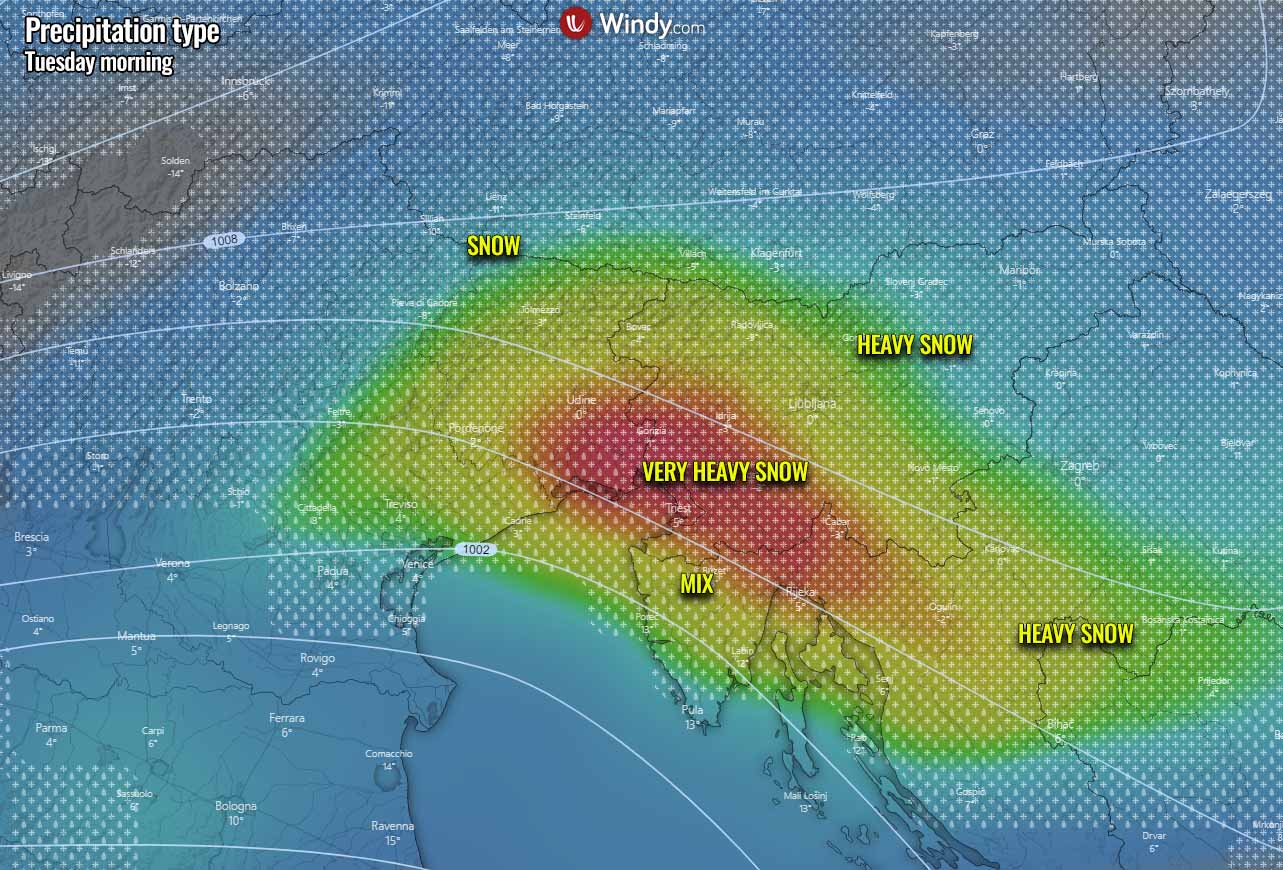 Heavy snow is likely to reach down to very low elevations and much closer to the coastal areas one would expect in the early April period. While a very strong jet stream rounding the core of the trough aloft, significant lifting will support heavy precipitation with the front. So heavy snowfall is expected in these areas.

Heavy snowfall will come together with strengthening winds, as a strong pressure gradient develops between the deepening North Mediterranean low and the expanding High further north. Heavy blizzard conditions are expected to develop across parts of Slovenia and Croatia through Tuesday morning, reducing visibility and also lead to snow drifts at higher elevations with drier snow in much lower temperatures.

While the change from rain to snow will be quite fast overnight, heavy snowfall will then persist for about 6-12 hours. And lead to quite a lot of snow accumulations during the frontal passage, some lowlands could see 20-30 cm of fresh snow, to nearly half a meter (40-60 cm) over the higher terrain and the Alps.

Once the leading edge of the Arctic trough/core advances further south towards the Balkan peninsula, heavy snow will also develop along and behind the advancing Arctic front across the Balkans late Tuesday. Significant snow amounts are expected along the western portions of the peninsula with some areas receiving close to 30-40 cm of fresh snow. 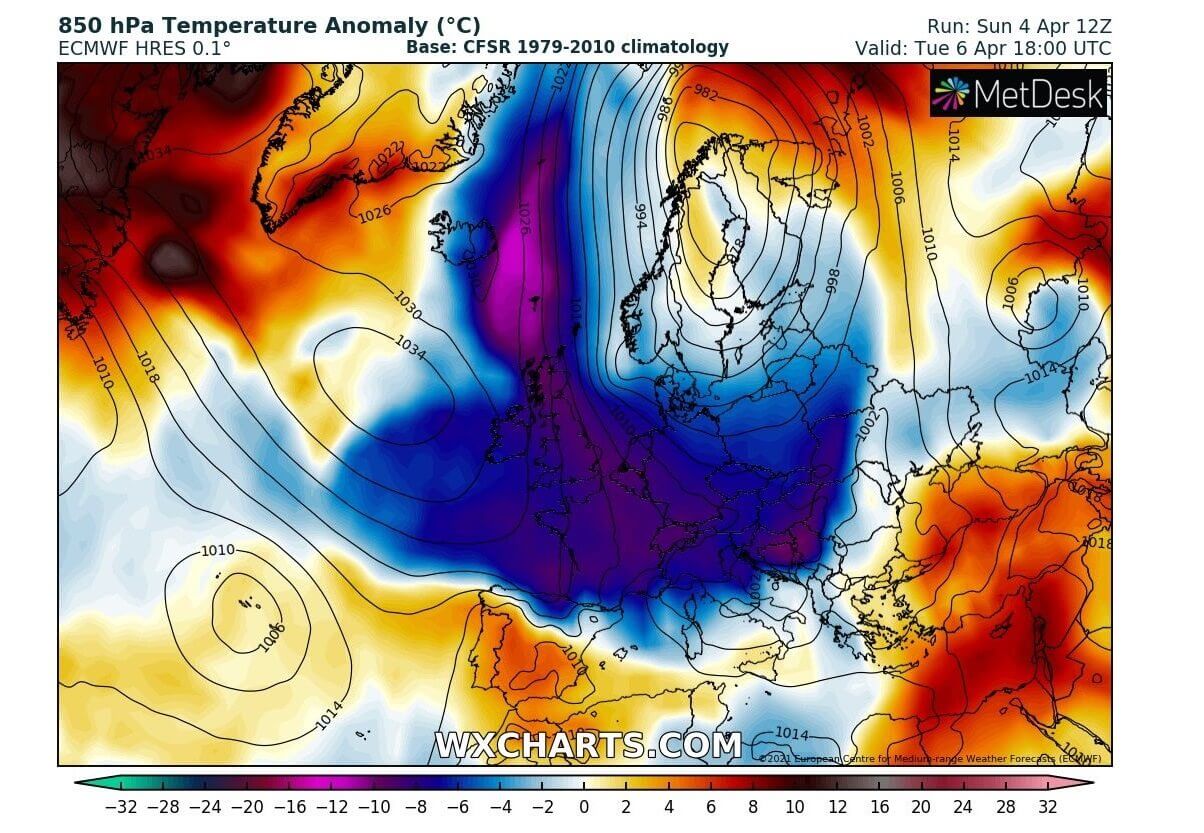 The Arctic cold air mass behind the surface front will continue south across central Europe, the Balkans, the Mediterranean, and also northern Iberia on Tuesday. The air mass in the lowest levels of the atmosphere will be 10-15 °C colder than average for early April. Combined with strong northerlies, it will feel like winter days, not the usual April spring day.

Unfortunately, a large part of Europe will experience what was the worst concern of this Arctic cold air mass intrusion over the continent. A very large and deep cold pool associated with this cold outbreak will bring a high-risk threat to the already blossoming fruit trees and other vegetation in early growing states. A significant danger of damaging freeze and morning frost is expected.

The expansion of the cold pool will be the largest on Wednesday, being the most intense and anomalous over France, the Mediterranean, and central Europe in the morning hours. Definitely, something we don’t want to see in April, not after the very warm to locally record warm spring days last week. Damage will be significant. 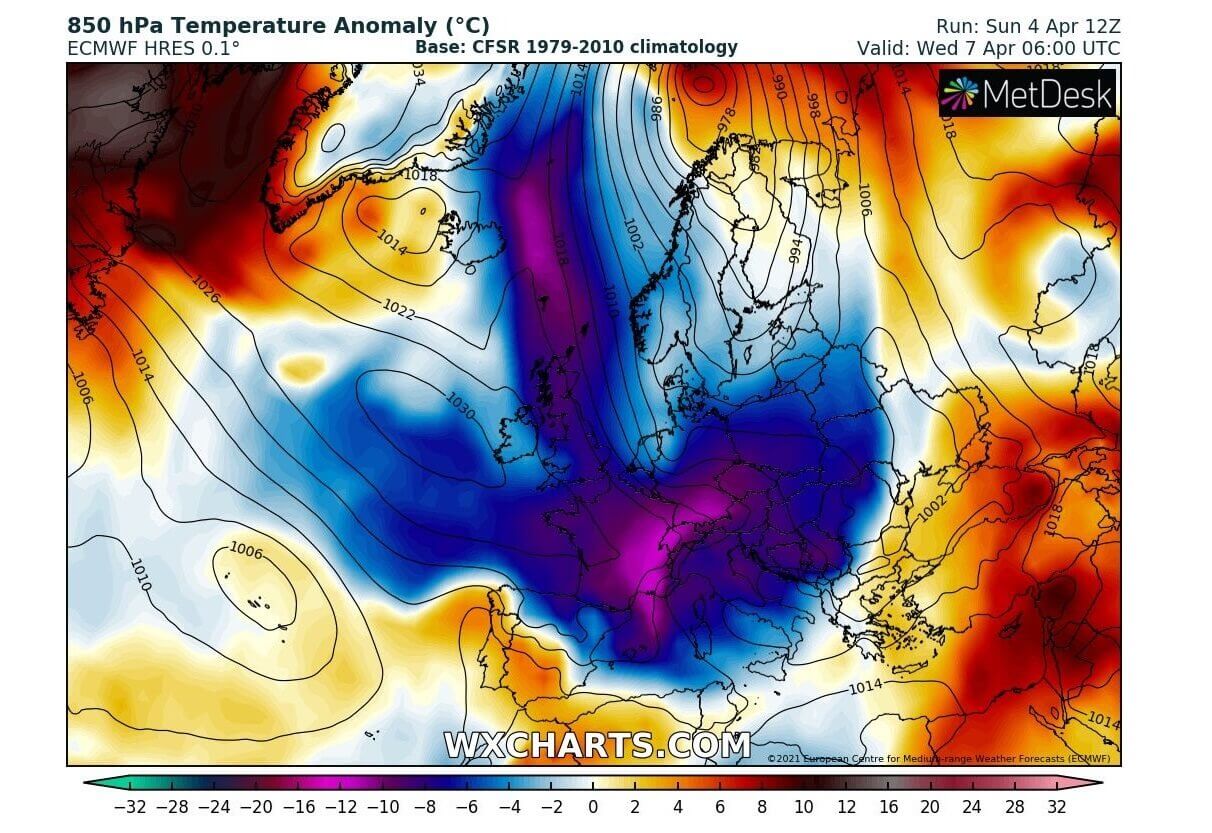 The morning temperatures will be extremely low for April across western and central Europe on Wednesday morning. Basically, the whole continent will experience well below freezing temperatures, even more than -6 °C in many areas to near -8 or even below -10 °C around the Alps and the northern Balkans.

These values are so low, that the frost will be destructive for the blossoming fruits. Those will be severely affected and results could be catastrophic in some regions, unfortunately. No fresh early spring vegetation could withstand so extremely low temperatures, since we’re talking about 5-10 °C below zero. The event will be historic. 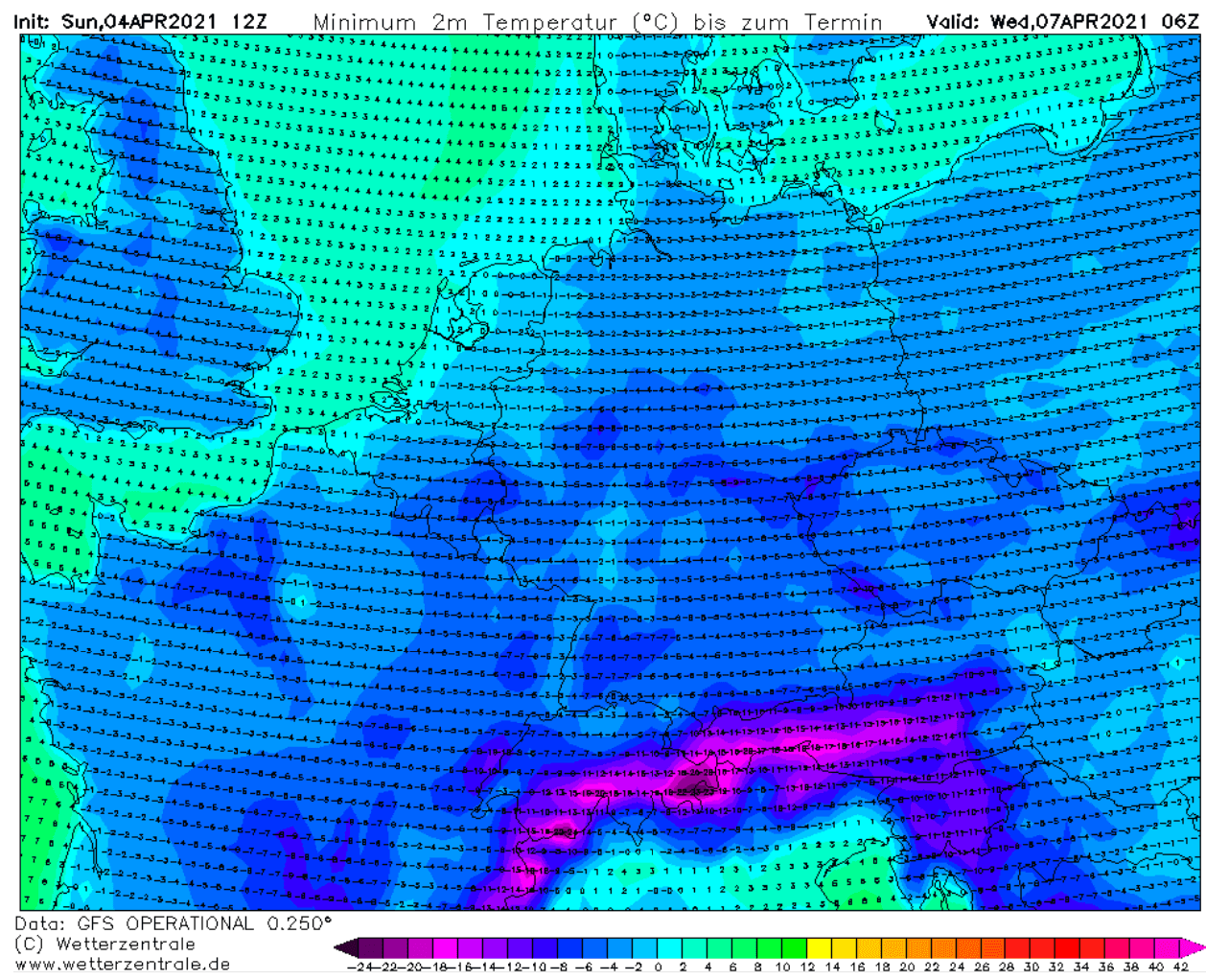 Between -3 to -6 °C will spread across the UK, Wales, Ireland, and Scotland, on both Tuesday and Wednesday morning. Temperatures will push even well below -5 °C across parts of France, Benelux, Germany, Czechia, Austria, and across northern Spain on Wednesday morning.

Another very cold morning will be on Thursday as the cold pool will remain strong, although the Arctic cold thankfully peaks a day before. It will again bring extremely low temperatures, being the lowest around the Alps and across the Balkan peninsula.

Again -5 to -8 °C will be possible across the northern Balkans (Croatia, Slovenia) on Thursday morning, potentially even lower further south across parts of Bosnia, Montenegro, and southern Serbia. As well as over Romania. It will be a very cold morning also across most of Italy. 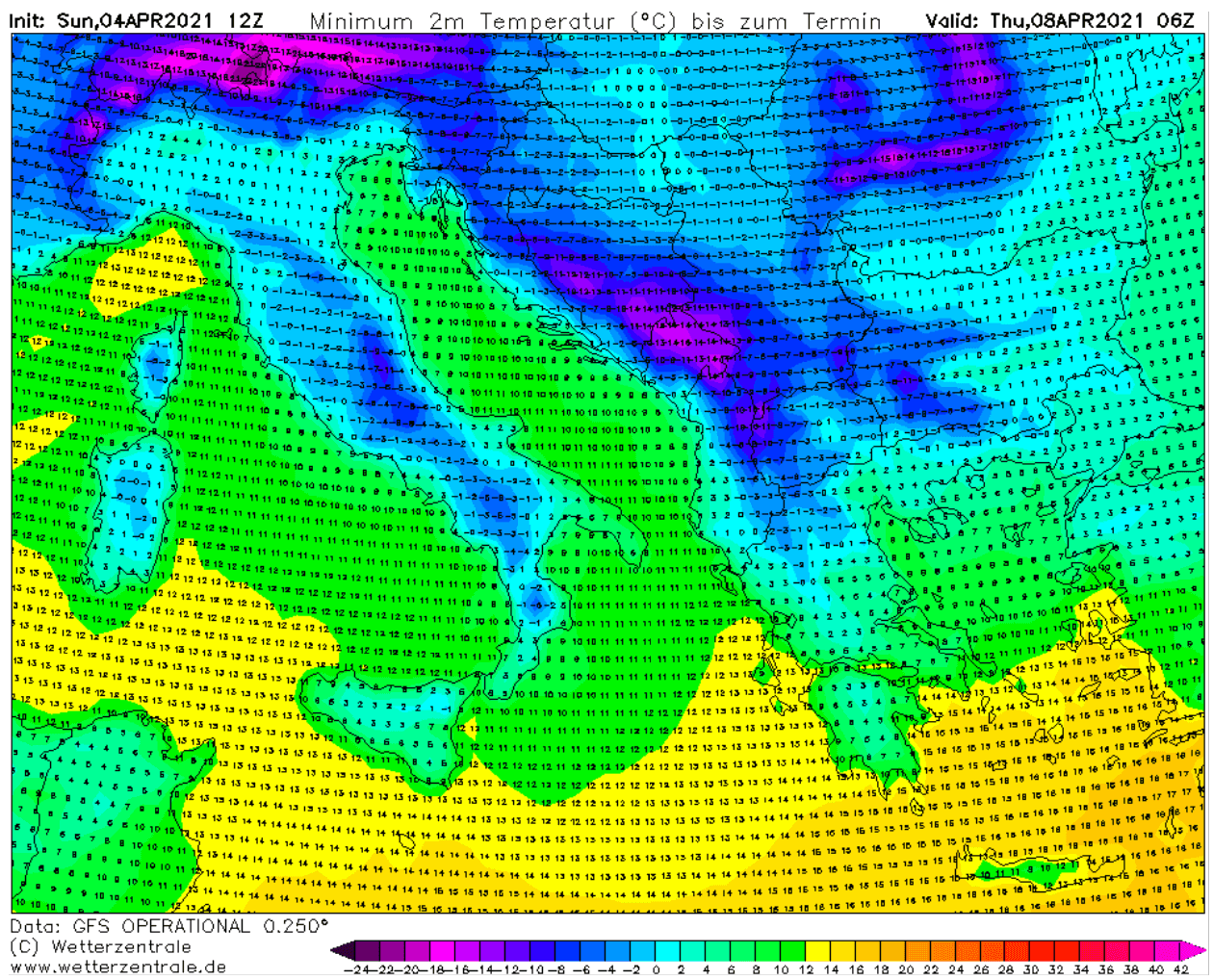 The general pattern evolution soon after the Arctic front passage will bring a fast weakening of the northerly winds and the strong downslope (Bora) winds along with the Dynaric mountain range, therefore calm winds with clear nights are likely to develop. With fresh snow covering the ground, conditions are going to be near-ideal for a destructive freeze and morning frost to vegetation and flowering trees.