Wild winter weather continues across the nation after the record cold and snow in the southern US. A deep Polar Vortex lobe aloft is finally shifting east, and so is the activity of the weather events. Another major snowstorm will impact tens of millions from Washington D.C. across New York to Boston. With a dangerous ice storm expected across North Carolina and Virginia on Thursday.

Through Wednesday night, a new snowstorm with lots of snow and ice is moving across East Texas into Louisiana and Mississippi. Deep snow is spread further north towards Tennessee with the strengthening of the winter weather towards the Mid-Atlantic on Thursday.

A swath of snow will develop from parts of the Lower Mississippi and Tennessee Valleys northeastward to the Mid-Atlantic and the Northeast, with probably the heaviest snow expected over the Mid-Atlantic and Central Appalachians. Locally close to a foot of snow could accumulate by Friday. 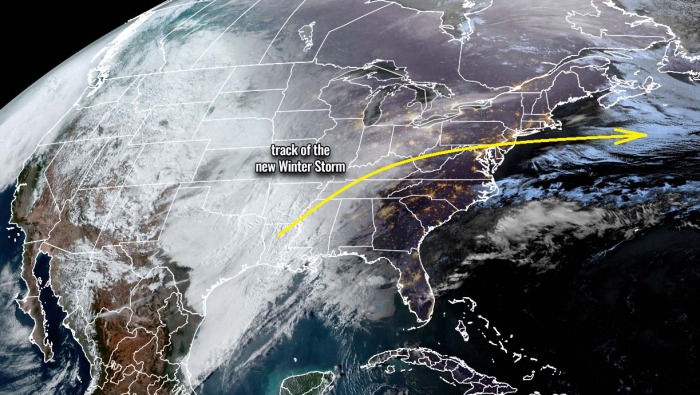 A major system will track from the Lower Mississippi Valley this evening into the Mid-Atlantic and Northeast through Thursday night. Threats for significant ice, sleet, and heavy snow will spread along its track. Total ice accumulations of 0.5″ to 0.75″ (1-2 cm) are expected from Eastern Texas into Northern Louisiana and Western Mississippi through late tonight.

As the winter storm tracks northeastward into Thursday, there is an increasing potential for 0.5″ to over an inch of ice accumulations across South-Central Virginia and parts of North Carolina. The same region is still recovering from a major ice storm that occurred this past weekend.

There will be significant travel disruption in both the snow and ice areas with concern for further/extended power outages for areas already experiencing power outages with the storm.

Based on the NOAA analysis this morning, February 17th, an impressive 73% of the lower 48 of the United States is covered in snow. Just to give you an idea, the area covered last month was only 31.2%. The snow coverage this year is also double the February last year. 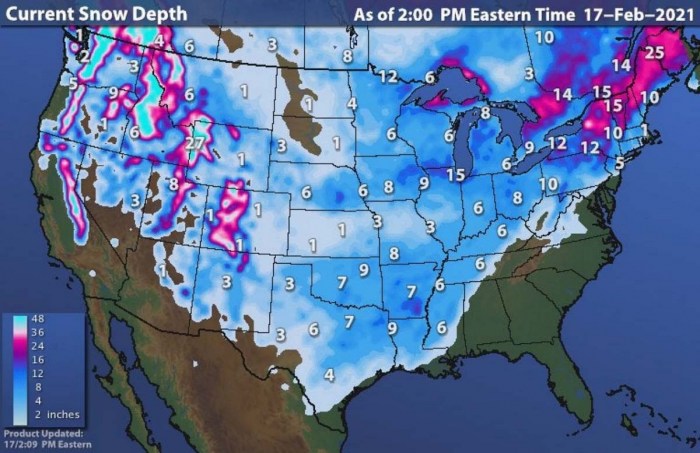 Snow cover across the US as of Feb 17th. Image: Wunderground

The increase of snow cover over the last several weeks was very fast, thanks to the numerous winter storms developing across the country since mid-January. While it first was just the normal weather patterns, it escalated through mid-February. Blame the Polar Vortex collapse which has occurred in early January, following the Sudden Stratospheric Warming event causing its collapse.

Thanks to the side effects of the Polar Vortex collapse aloft, the weather was extreme lately. Extremely cold, frigid Arctic air mass spread from Canada into the United States with temperatures even below -40 °F across the north with life-threatening wind chills reaching down to -60 °F near the International border with Canada over the last weekend.

But the main focus was then turning on the historic, record-breaking cold which hit the southern and central parts of the US and continued also this Wednesday. Temperatures were almost below 0 °F down to the Texas Gulf Coast. Indeed time-sensitive, but below-freezing temperatures were reported from coast to coast, except for the far southeast and the southwest US from Sunday through Wednesday. 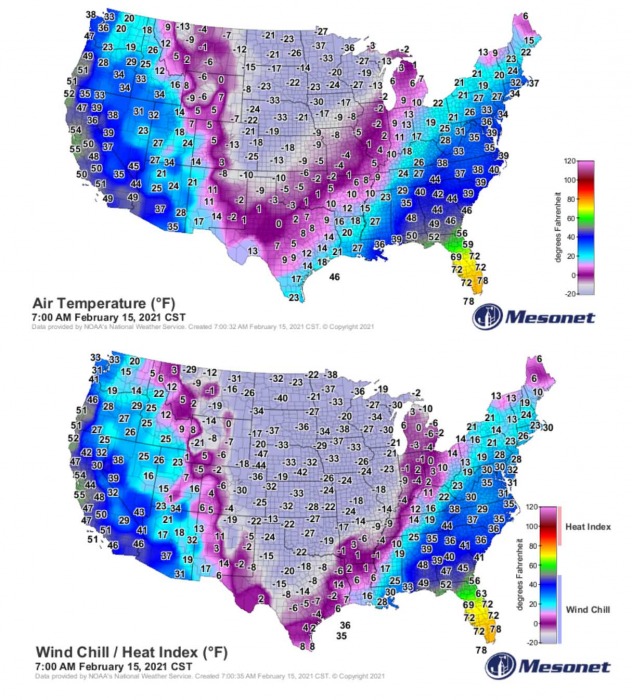 The cold event has spread in the wake of a major winter storm with freezing rain and a lot of snow for Texas and Oklahoma. It locally brought the lowest temperatures over the last 100 years. Tuesday was the peak of the frigid cold event for the South, with temperatures even close to 50 °F below the long-term average.

Sadly, these events also lead to at least 30 fatalities for various reasons but related to the unusual weather for the South. Both from numerous crashes in icy roads, even from poisoning with carbon monoxide.

Nearly 4 million Americans were still without electricity this Wednesday morning. Due to extremely high demand, the electric grid operators have been forced to cut power on a rolling basis for many. The only way they could avoid even worse power outages and the collapse of the grid system.

A large part of the United States remains under winter storm warnings and advisories as impactful winter weather continues from coast-to-coast. A new dangerous snowstorm has spread across Texas, but also brought freezing rain, spreading east towards Louisiana today into tonight.

The freezing rain and extreme cold (windchill) which hit southern portions of Texas brought major power outages for Texans and Monday. More than 4 million people were still without power this Wednesday morning. The new wave is now bringing the worst for the eastern portions of the state. 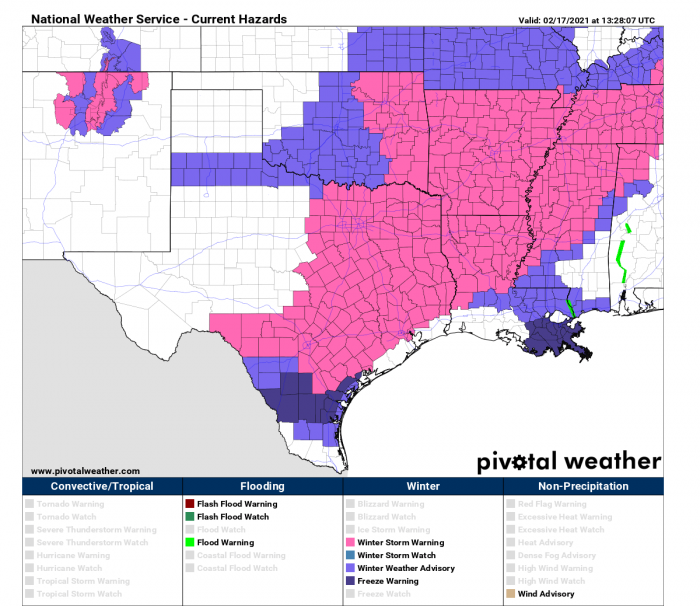 A Winter Storm Warning continues for portions of East-Central Texas, Arkansas, northern Louisiana, and Mississippi through noon Thursday. A few inches of snow and up to one-quarter inch of ice accumulation can be expected. Impacts include dangerous travel conditions, additional power outages. Travel is discouraged through the rest of today as roads will remain very icy, even after the snow has stopped falling. 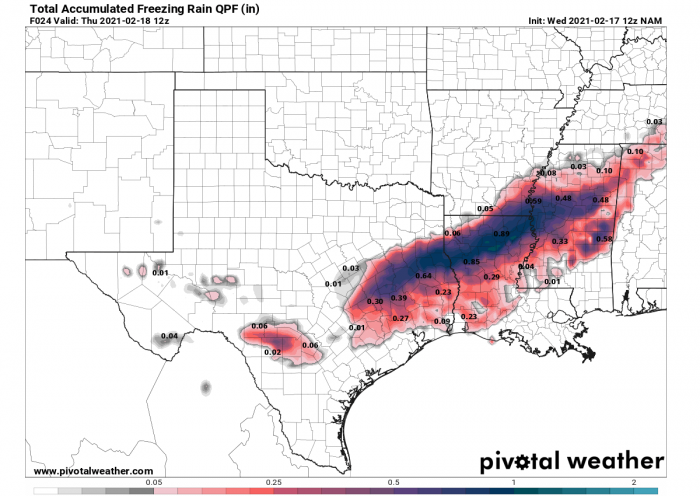 The total ice accumulations up to 0.75″ (2 cm) are expected from Eastern Texas into Northern Louisiana and Western Mississippi through late tonight into Thursday morning along the southern edge of the new major winter storm forecast to spread heavy snow and significant ice accumulations from the Southern Plains and Ohio Valley to the Northeast.

Such an amount of ice could be damaging for the trees and lead to additional significant power outages and traffic issues and road closures. Especially as temperatures will remain very low when the salting usually is not that effective anymore. Bridges will be the first to freeze!

Although the next system might still be far away from the East Coast, its first effects will spread across the Ohio Valley towards the Mid-Atlantic Region through Thursday morning, reaching New York around 7 AM and Boston around 3 PM Thursday.

The first hours will see very heavy snow from Washington, D.C., to Philadelphia and New York City on Thursday morning. Thanks to high moisture advecting into the system from the south, increasing precipitation significantly. 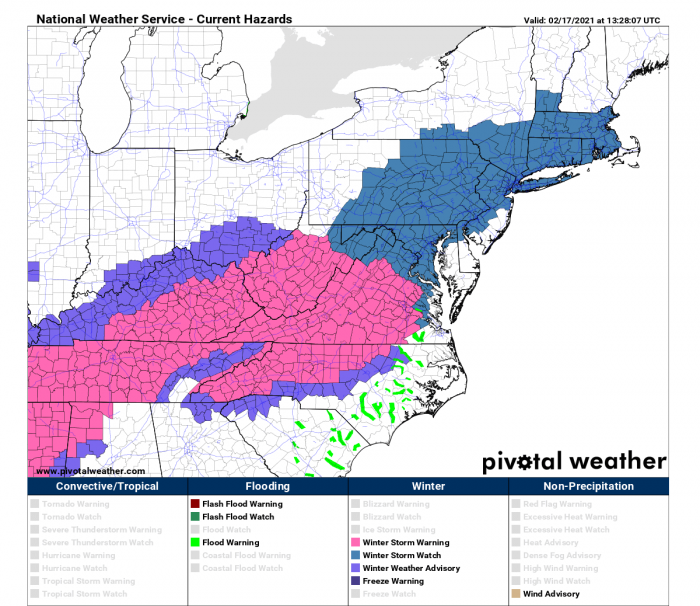 A narrow swath of 5-10 inches of snow, potentially even more locally, is forecast from West Virginia through central Massachusetts and towards the northeast. New York City could be near the center of this swath. Receiving near 6-8 inches, potentially even more than a foot of fresh snow over the areas to its west.

The major city is expected to be at the worst of this new snowstorm right in the morning traffic increase. Travel disruptions and delays are likely between Washington, D.C., and New York City.

The frontal system is then forecast to move further east during the day and reach the city of Boston by the peak time afternoon hours there, so difficult travels are expected into the evening hours. 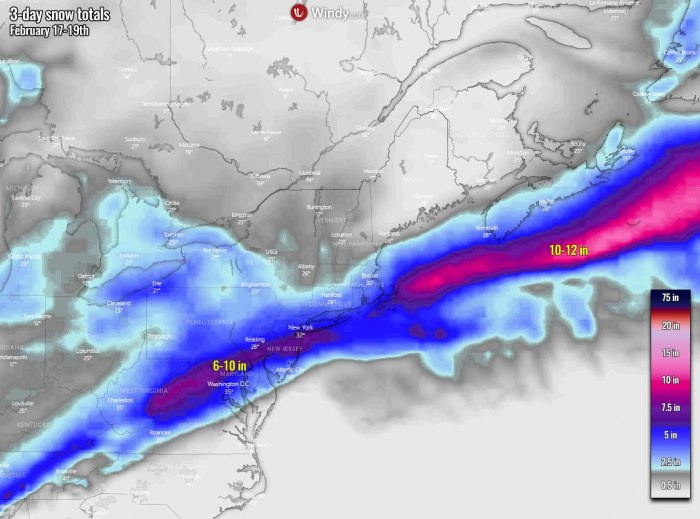 There could be up to around 10 inches (25 cm) of new snow across Manhattan by the end of the day. New York has, so far, received nearly double the normal seasonal snowfall amount, 34 inches (3 feet) of snow. The Big Apple normally gets around 16-17 inches through mid-February.

So the heaviest snow and the worst driving conditions with high snowfall rates are forecast right along the busy Interstate I-95 corridor between Philadelphia, New York, and Boston.

Philadelphia has received about 30% more snow than normal, with near 20 inches of total snowfall compared to the normal amount of 15 inches of snow through mid-February.

Further south of the main swath of heavy snow, a narrow corridor of dangerous freezing rain and potentially damaging ice storm is forecast. Although the lowest levels remain very cold, the warm advection arriving with the system will push much warmer air aloft.

This will create near-ideal conditions for heavy freezing rain across the west-central parts of North Carolina and Virginia. 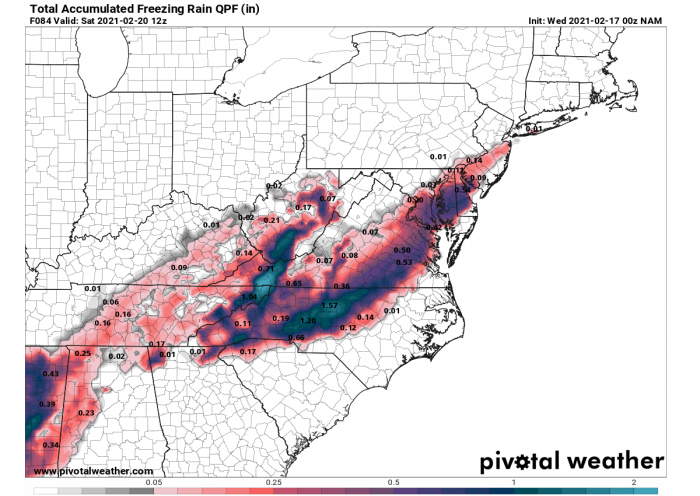 Some ice is also likely across southern portions of West Virginia, thanks to the very cold lower parts with rain coming down with the warmer air mass aloft.

Ice accumulations could become significant across North Carolina and Virginia. Potentially even more than an inch (1″ or 2.5 cm) could accumulate. It all depends on how far north the system’s center will go and bring more moisture, while the cold pool remains near the ground.

Significant damage to power lines and trees could result in such an amount of ice thickness.

SEVERE STORMS WITH TORNADO POTENTIAL FOR FLORIDA AND SOUTHEAST

Just two days after the deadly tornado in North Carolina, there is again a treat for isolated to scattered storms with damaging winds and a couple of tornadoes possible across a portion of the central Gulf Coast, after about 6 PM CST today through the overnight as the new front surges east.

Tomorrow, Thursday, isolated strong to severe thunderstorms may occur across parts of the Southeast, including Florida Panhandle and Georgia. A couple of tornadoes and isolated damaging wind gusts will be the main hazards with these storms. 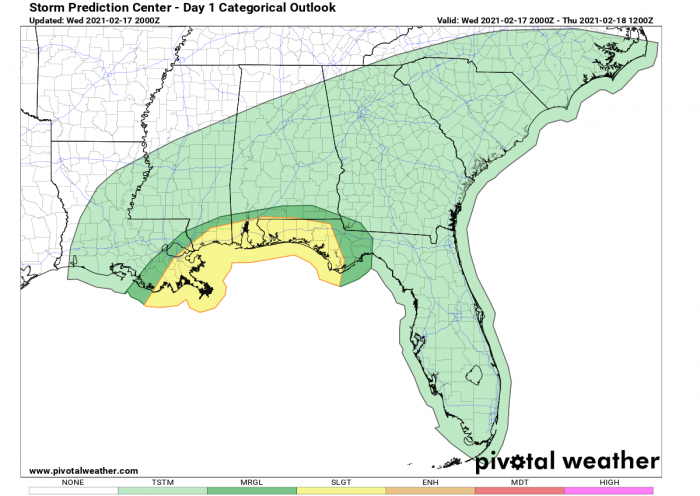 A rather enlarged low-level hodograph coincident with 50-60 kt effective shear should yield potential for embedded supercell structures within the squall line, capable of producing a few tornadoes and damaging winds.

The SPC has issued SLGT (Slight) risk for both days, highlighting the areas where the highest severe weather potential exists. 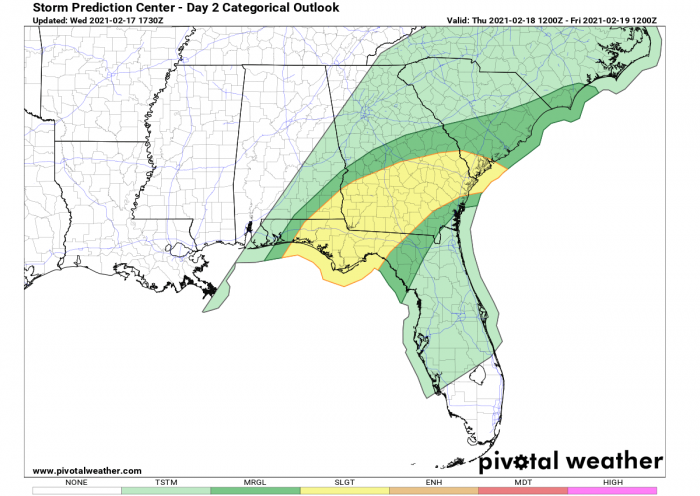 ***The images used in this article were provided by Windy, PivotalWeather, and Tropical Tidbits.