An upper ridge dominates much of Europe while an upper low sits over Algeria and Tunisia. A deep trough with an intense surface cyclone moves across the SE Iceland towards northeast.

MDT risk has been issued for areas SE of Iceland with threat for extremely severe winds in excess of 130-140 km/h.

ENH risk has been issued for surrounding areas of MDT risk including eastern Iceland where severe to extremely severe winds are expected, locally in excess of 120 km/h. Heavy snowfall will be on going across the ENE Iceland which should develop intense blizzard conditions as well.

SLGT risk has been issued for areas surrounding MDT / ENH risk areas including much of Iceland, N Atlantic, N scotland, Faroe islands and coastal W Norway with threat for severe winds, locally in excess of 100 km/h. Heavy snowfall with blizzard conditions are also likely across Iceland.

SLGT risk has been issued for parts of S Mediterranean into NE Tunisia with threat for severe storms, capable of producing marginal hail, severe winds and excessive rainfall.

Polar Vortex, fallen king of the North, is moving again, trying to reclaim its weather dominance as it heads back over the North Pole 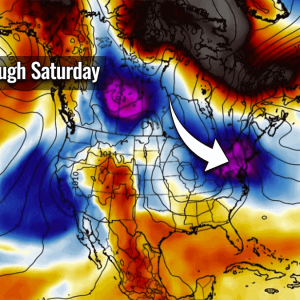