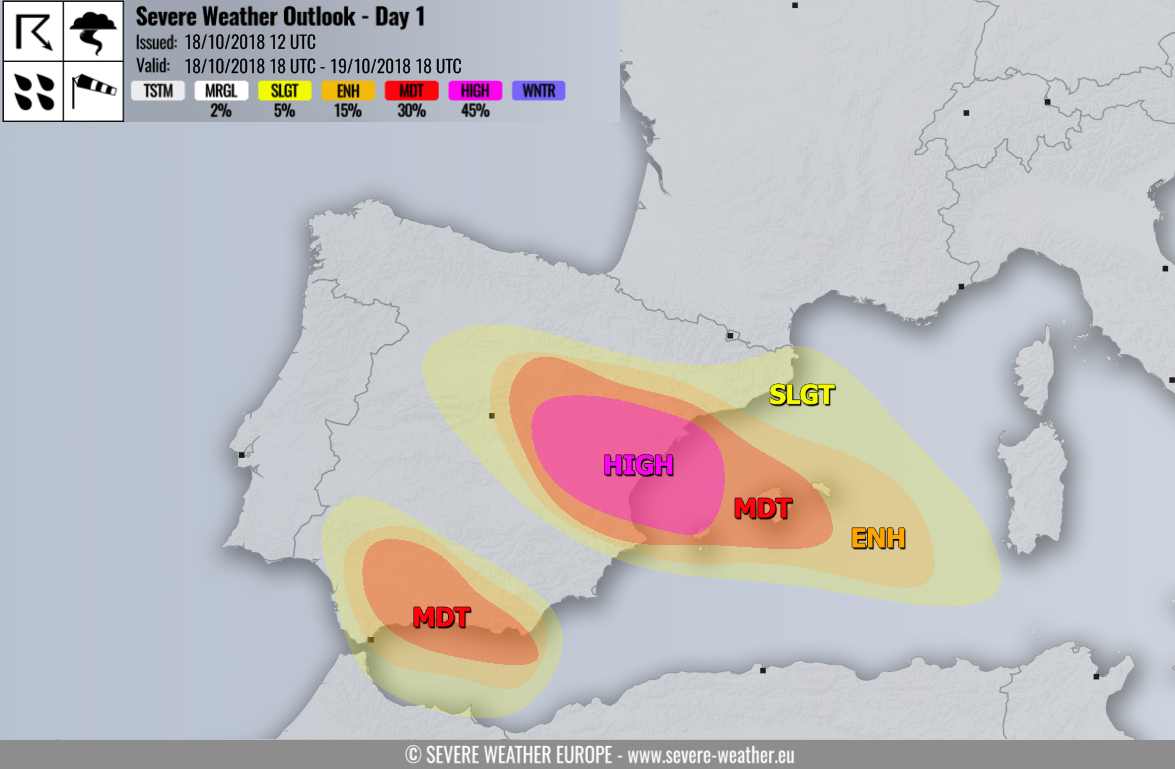 The pattern across Europe revelas strong ridging across the east-central parts of the continent and also a strengthening ridge over the northern Atlantic. At surface, strong high pressure systems are located over the far eastern and western Europe. Over southwest Europe, a deep upper low is centred above south Spain the associated surface cyclone over southern Spain and moving over northwest Morocco. This pattern will establish a strong eastern flow from the warm Mediterranean into the eastern Spain.

HIGH risk has been issued for eastern Spain (Valencia, Castellon, Teruel, Cuenca and parts of Alicante regions) with threat for extreme rainfall, capable of producing severe damaging flooding. Various high-resolution model guidance is in fairly good agreement on excessive torrential rainfall across these regions of eastern Spain over the next 24 hours. In response to the cutoff low moving southwards across the western Iberian peninsula, strong easterly to northeasterly flow develops over the western Mediterranean. Warm, very moist air will push into the coastal area and further inland, leading to persisting training deep convection, fueled by moderate instability (MLCAPE 1000-1500 J/kg) under only marginal shear. Slow moving intense storms will result in very intense rainfall. Additionally, orographic lift will enhance conditions for torrential rainfall. Rather weak shear should also allow higher waterspout threat along the coastal areas, some of those could be strong and move onshore.

MDT / ENH risks have been issued for surrounding areas of HIGH risk where excessive rainfall is expected as well, but will be less robust. However, flooding threat will also be considerable, given the expected amounts of rainfall 80-130 mm in less than 24 hours period.

MDT / ENH risks have been issued for southern Spain (Malaga, Seville, Granada and part of Cordoba regions) with threat for excesive rainfall, locally resulting in 80-120 mm in the 24-hour period. Despite only weak instability in place, the combination of persisting strong orographic lift and convective storms could locally produce significant flash floods.

SLGT risk areas have been placed across south, east-central and northeast Spain where some isolated threat for excessive rainfall and flash floods exists.

Please refer to the mesoscale discussion for more details: