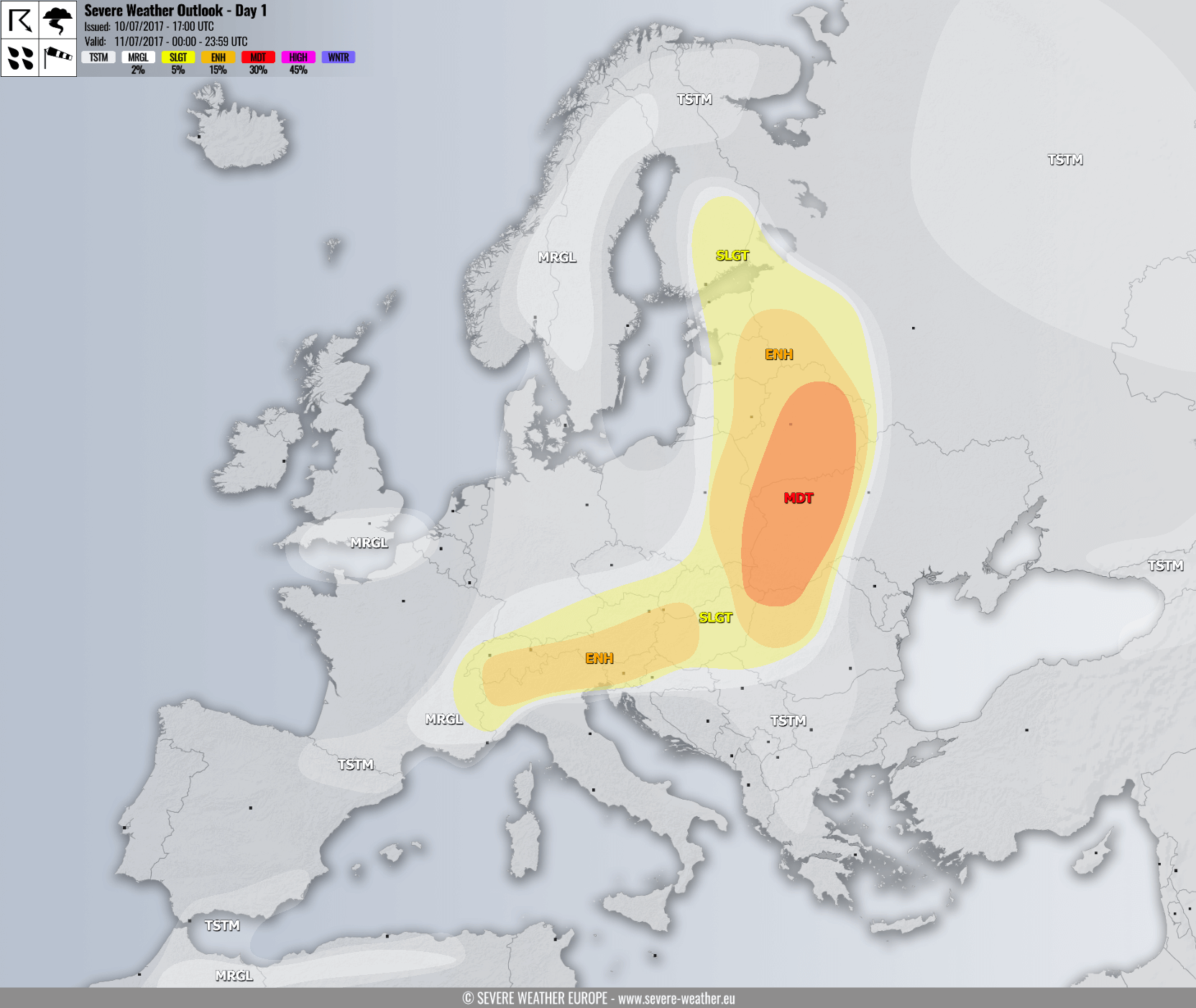 A large trough is expanding towards central Europe where two short-wave troughs are causing severe weather, one moving across Poland towards Baltic States and another one crosses the Alps from the west. A small but intense short-wave embedded in the strong jet crosses S UK, while a strong ridge develops over Iberian peninsula.

A MDT risk has been issued for SE Poland, E Slovakia, E-CNTRL Belarus, W-CNTRL Ukraine into N Romania with threat for severe storms capable of producing large to very large hail, severe damaging winds, tornadoes and torrential rainfall. With an eastwards progression of the short-wave coming from the west, large scale ascent will trigger widely scattered storms by early to mid afternoon while they organize into severe storms given the great overlap or moderately strong shear and instability. MLCAPEs are ranging between 1500 and 2000 J/kg locally, which should also be supportive of very large hail in excess of 5 cm. Given the favorable helical LL environment, tornadoes are possible as well.

An ENH risk has seen issued for areas surrounding the MDT risk including E Poland, E Baltic states, central Ukraine, NE Hungary and N Romania with similar threat as within the MDT, but more isolated activity is expected. The ENH risk area was extended into W Russia with a reason of expected NE-wards moving storm clusters in the late afternoon or evening hours.

An ENH risk has been issued for the Alps, N Italy, Slovenia, S Austria and W Hungary with threat for scattered to widespread storm activity, including severe storms. Those will be capable of producing large to very large hail, severe winds and torrential rainfall. While most of the storm activity is expected later in the afternoon and evening hours, it’s likely that on-going night/early morning MCS activity over the Alps could extend into late morning and re-intensify while moving across the risk area into S Austria and Slovenia. Moderate deep-layer shear and moderate to strong instability (MLCAPE locally in excess of 2000 J/kg) will support rather rapid storm development. Some hints of more elevated storms seem over W Hungary and NE Slovenia which could enhance severe hail threat. Storms will merge into cluster or two while spreading towards N Croatia and central Hungary in the evening.

A SLGT risk has been issued surrounding the ENH risk areas from E France across the Alps, S Germany, Czech Republic and Slovakia, E Poland into Baltic states and S Finland, as well as E-CNTRL Croatia, N Serbia, N Romania and N Moldova. These is threat for some isolated storms in this area, capable of producing large hail and severe winds. Some more concentrated area for better coverage of storms is expected near the front across central Baltic states into S Finland. In addition to large hail and severe winds, heavy excessive rainfall could occur.

A MRGL risk has been issued for S England into English Channel, extreme N France and NW Belgium for some isolated threat in the later afternoon hours when a rather intense short wave rapidly moves across. With very limited instability but strongly sheared environment, severe winds and some tornado threat exists, in addition to excessive rainfall.