A deep long-wave trough is dominating Europe, resulting in the cold Arctic outbreak well south into south-central Europe. Two deep cold cores are embedded in the trough, one over Scandinavia and another one over N Mediterranean. Upper ridge remains over N Atlantic and Arctic region while a new deep trough is being pushed from the west. A short-wave trough with a well-defined frontal system moves across Greece. 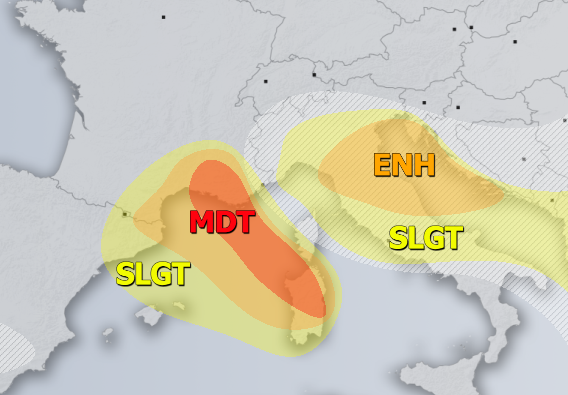 MDT/ENH risks have been issued for S France across NW Mediterranean into S Corsica and Sardinia with threat for severe to extremely severe non-convective wind gusts, locally in excess of 130 km/h. A sharp temperature and pressure gradient develop intense downslope winds on the rear side of the Genoa low. The most exposed places and elevated locations could experience gusts above 150 km/h!

SLGT risk has been issued for areas surrounding the MDT/ENH risks with threat for severe non-convective wind gusts, locally in excess of 90-100 km/h.

ENH risk has been issued for N-CNTRL Adriatic sea, SW Slovenia, NW Croatia and parts of N-CNTRL Italy with threat for severe storms, capable of producing severe winds, torrential / excessive rainfall, marginal hail and tornadoes / waterspouts. Sharp Arctic cold front crosses the risk area in the morning hours, resulting in convective activity under both marginal to moderate shear and instability. A powerful forcing associated with the Genoa low should allow widespreads connvective cells over the Adriatic sea, locally resulting in flash floods and waterspout threats. An additional threat comes behind the front with powerful downslope Bora winds across SW Slovenia and NW Croatia, locally in excess of 120-130 km/h. 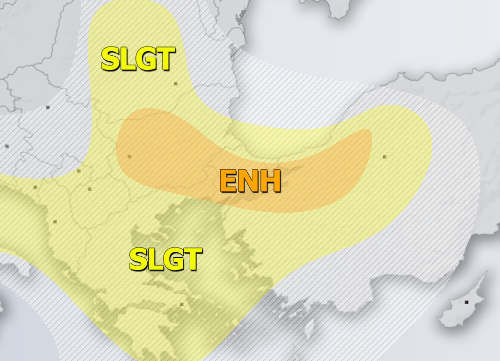 ENH risk has been issued for central Bulgaria into NW Turkey with threat for severe storms, capable of producing large hail, severe winds and torrential rainfall. Moderately strong shear and instability will support organized storms, including supercells, across the warm sector of the frontal system moving through.

SLGT risk has been issued for W Russia with threat for severe storms, capable of producing severe winds, large hail and torrential rainfall. Moderately strong instability in marginal to moderate shear should again support some organized storms along the moving frontal boundary in the afternoon hours.

Share on TwitterShare on RedditShare on FacebookShare on PinterestShare on WhatsApp
UPDATE on the historic Arctic front moving across Europe this weekend, May 3-6th
← Previous
Sub-freezing temperatures across large parts of central and western Europe tomorrow morning - Monday, May 6th
Next →
Comments are closed.