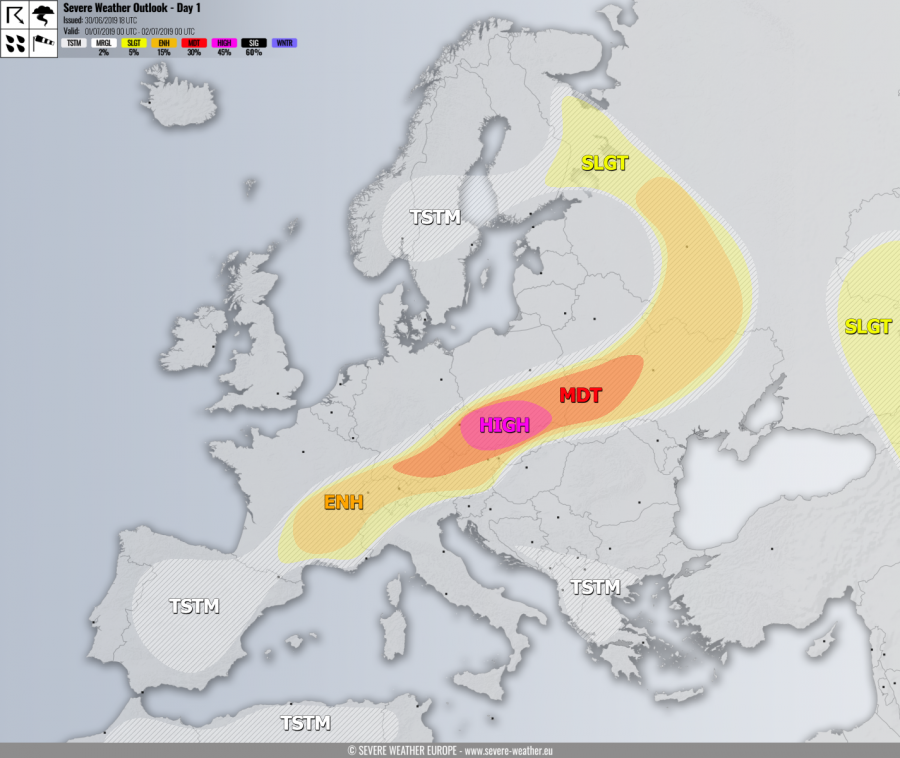 A strong ridge is located over the southern half of Europe while a large long-wave trough is moving across northern Europe with a surface cyclone located over Scandinavia. A sharp frontal boundary is extending from NW Russia across east-central Europe towards France.

HIGH risk has been issued for E Czech Republic into N Slovakia and S Poland with threat for severe storms, capable of producing severe to extremely severe straight-line winds, large to very large hail, torrential / excessive rainfall and tornadoes. A very robust environment is present with strong instability (MLCAPE locally exceeding 2500 J/kg) overlapping with moderate to strong deep-layer shear near the surface front. Isolated storms including intense supercells are likely to develop, supportive of very large hail and some tornado threat given the enhanced SR helicity (100-250 m2/s2) near the frontal convergence. The primary threats could be the severe straight line winds and large hail given the lack of directional shear, with initially isolated and discrete storms trending into lines / bowing segments. Towards the evening hours, storms will merge into a large cluster or two, posing an extreme severe wind threat as bowing segments with damaging gusts (locally in excess of 120 km/h) are likely to develop while moving across S Poland and N Slovakia.

MDT risk has been issued for areas surrounding the HIGH risk including S Poland, W Ukraine, Czech Republic, N Austria, N Slovakia and SE Germany with threat for severe storms, capable of producing severe straight line winds, torrential rainfall and large to very large hail. Less coverage is expected across the MDT risk, despite however, similar conditions than within the HIGH risk area. Very large hail is locally possible where well-organized supercells form. MDT was extended across SE Poland and N Slovakia for the potential severe wind/hail threat with the evening cluster/MCS moving through.

ENH / SLGT risks have been issued for SE Belarus, N/W Ukraine and across NW Russia into SE Finland with threat for severe storms, capable of producing severe straight line winds, large hail and torrential rainfall. Widespread convective activity is likely under the moderately strong shear and strong instability across the warm sector. Storms will likely merge into a MCS into the early evening across Ukraine, with threat for severe straight-line winds if bowing segments develop as well.

SLGT risk has been issued for SW Russia into Georgia with threat for severe storms, capable of producing severe winds, large hail and torrential rainfall.