As August slowly comes to an end, we quickly take a look back at June and July 2019 temperature anomalies.

There are many different datasets available, that analyse surface temperatures globally. One of the more known ones is GISS from NASA, for example. We, here at SWE, tend to use more state of the art datasets, like the new ERA-5 from ECMWF. It is currently the most highly regarded and “respected” high resolution dataset. We also use the MERRA-2 dataset, which is also from NASA. MERRA dataset is also a high resolution, state of the art dataset, which we use to control ERA-5 and vice-versa.

The graphic below was produced by the Copernicus EU project, and shows the global temperature anomaly data from ECMWF ERA-5 dataset. We can see that the latest years were all among the warmest on observational record. Data goes back only to 1980 on this graph, but when people say a certain month or period was “warmest on record” they usually mean the instrumental observational record, which began around late 1800`s. Prior to that the data is not completely as reliable, but there are fairly good reconstructions for comparisons.

As we can see on the image above (July month is dark-red in color), July 2019 was warmest on record for any July so far. But warmest on record does not mean that he whole world was warmest. The data in the graph above is just a global average number. So when we look at the full picture, that we produced from ERA-5 data, we can see the sources that contributed most to this high average and which areas were actually colder than normal. 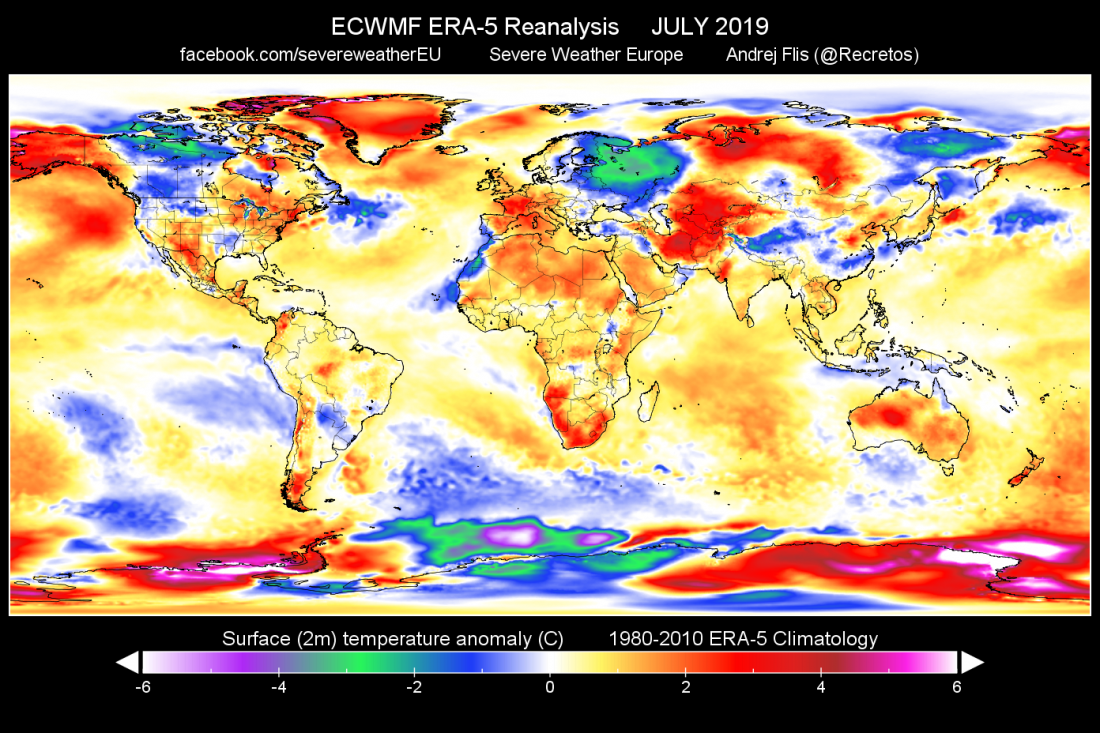 It is obvious right away, that the largest contributor to the high global temperature average number was Antarctica. Since it is on the south hemisphere, it is currently winter there. Dynamical winter weather with deep lows and strong warm advections, has brought warmer air into the Antarctic circle, boosting warm anomalies to values over 8°C above normal for the monthly average over large areas. On the other side, we can actually see below normal temperatures in far east/northeast European sector and Scandinavia/Russia. Also in parts of Canada and of course Antarctica, where there was a persistent low pressure system, that also enabled the high above normal temperatures on each side.

Looking closer at the European sector, we can see the large area of below normal temperatures. That was mainly due to the persistent low pressure area in the east parts of EU and the Russian sector. It was also aided by the ridge in the mid-western EU. Both graphics below were produced in house at SWE, from ERA-5 and MERRA-2 data. In continental EU, we can see that France has the highest temperature anomaly. That is mainly due to the strong heat wave in late July. 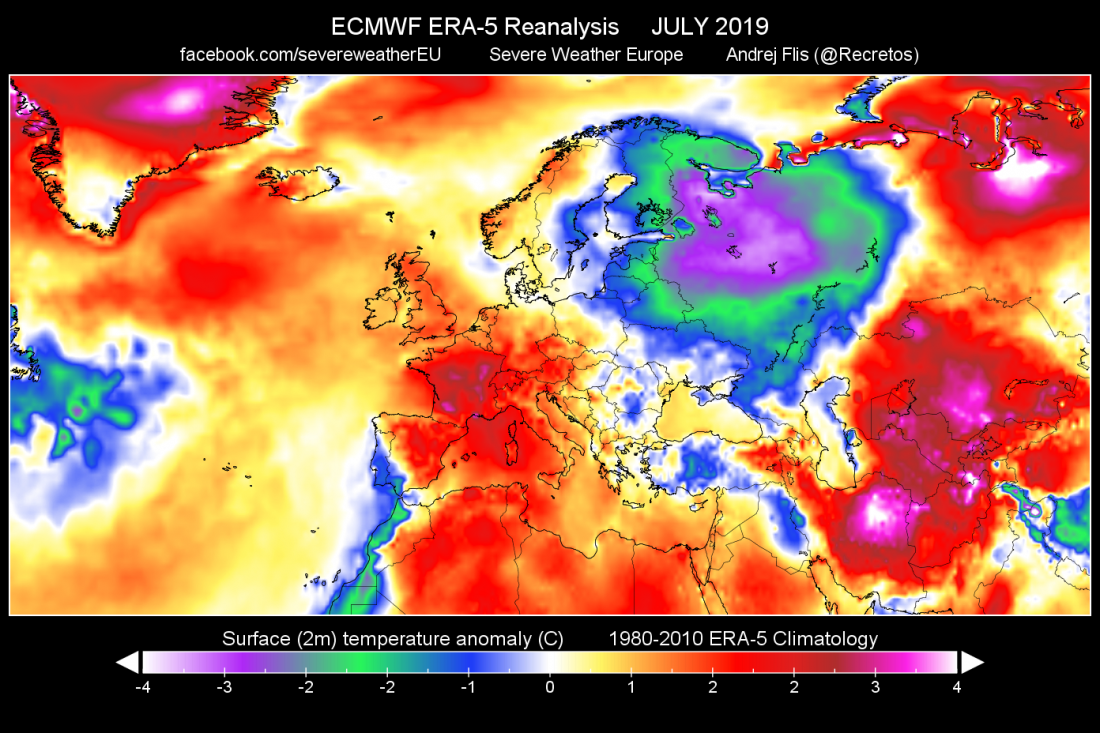 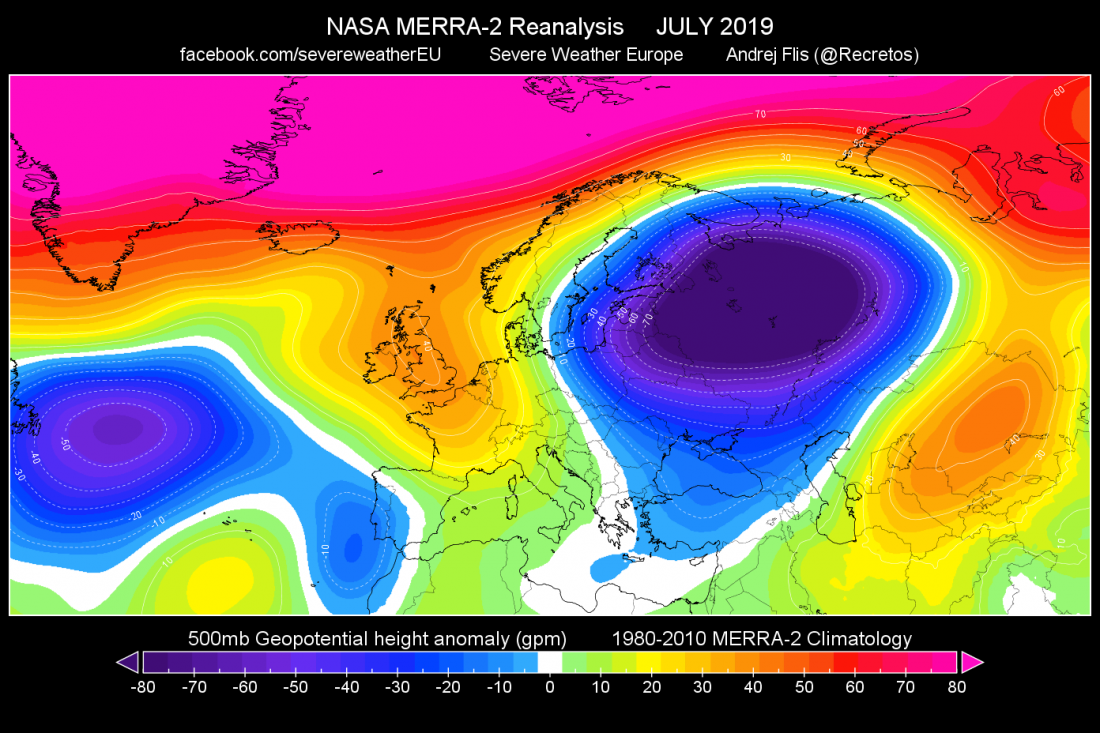 Since June 2019 does stand out in Europe data, we made a special graphic to show how the anomalies looked like. We can see right away why it was ranked so high. There was persistent ridging, that generated strong heat waves. Large parts of Europe were more than 4-5°C above normal, which is quite a significant value on a monthly average. With the exception of far west areas at the Atlantic, and far north Scandinavian parts, entire continent was above normal in June, which was strongly the warmest June on record in Europe so far. 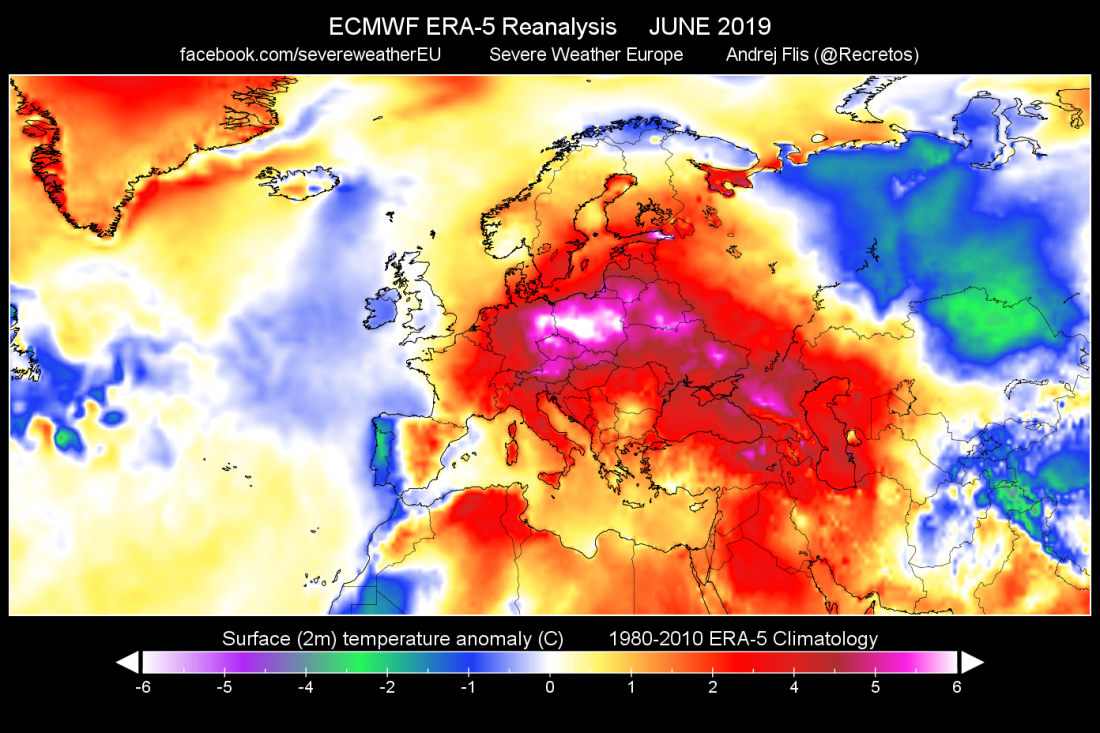 Above normal temperatures and ridging, can also be traced to rainfall anomalies. Drier than normal across large parts of the continent, where most rainfall was from individual convective storms, rather than complex frontal systems, which were lacking there, and were focused more in the western parts and were causing severe weather events in west/central EU. In July, south/central parts of EU had above average rainfall, which together with above normal temperatures reflect the reported increased number of severe convective systems. Scandinavia was dry in July, since it was under the influence of the cold and dry air from the north. 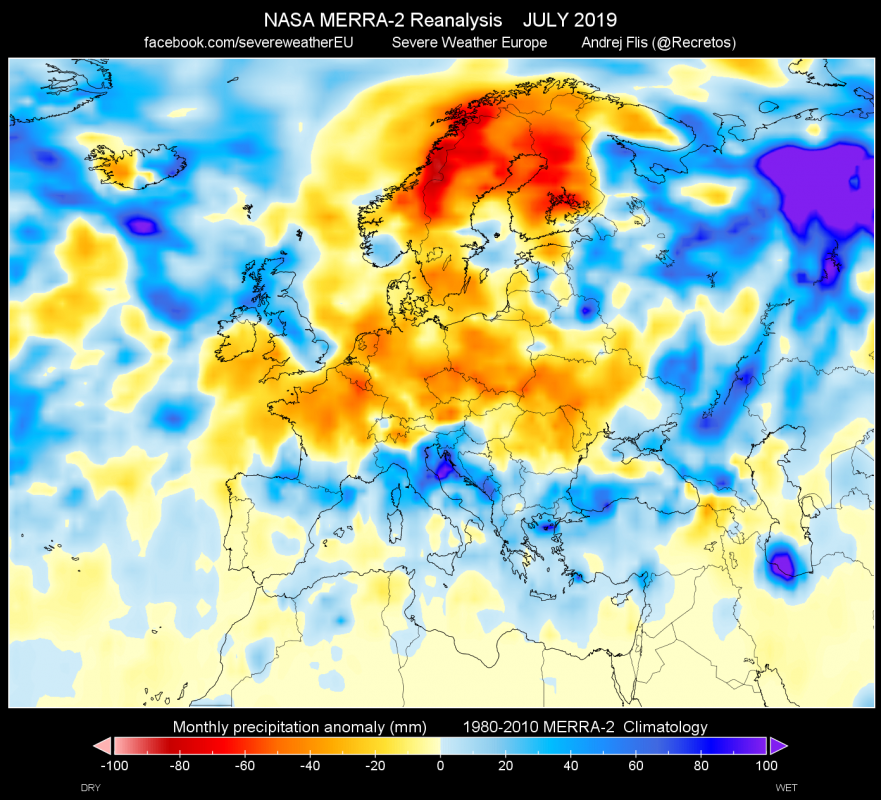