Every year around Halloween a sprinkle of bright meteors appears: the Taurid meteor shower.

If you missed the Orionids worry not, it is followed by the beautiful Taurid meteor shower. The Taurids are a sparse shower of pretty, bright, slow meteors. The first Taurids appear as early as September and they persist until January, but it is the final week of October and first half of November that they are the most numerous. If you see a bright meteor during your late evening walk, it is quite likely a Taurid. 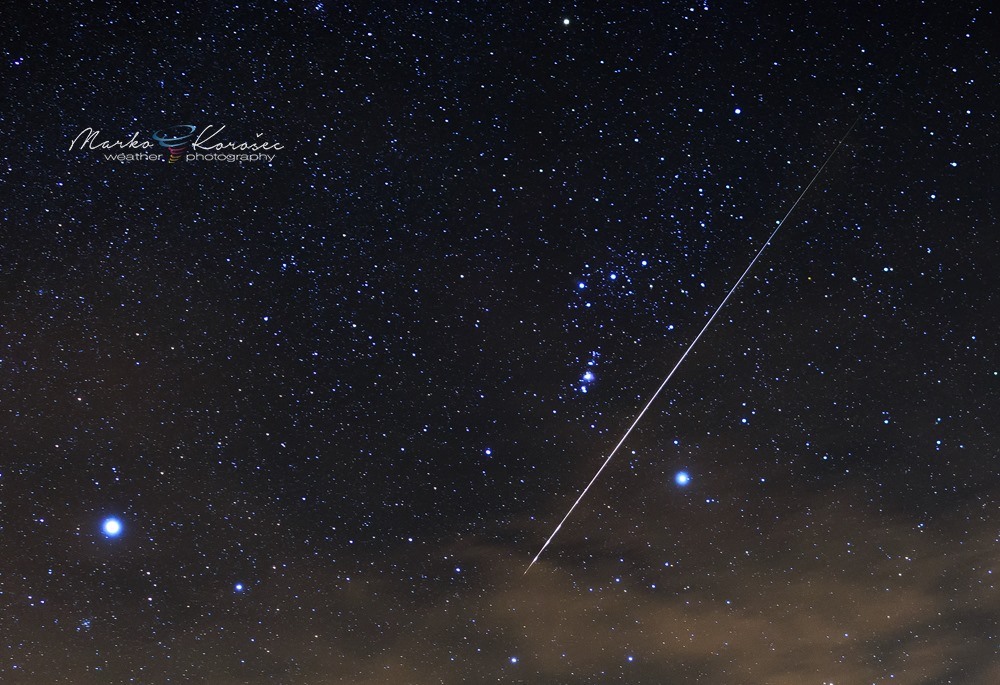 The Taurid meteor stream has been associated with the periodic comet 2P/Encke, which revolves around the Sun every 3.3 years. The comet, however, is rather small and has been considered too small be the parent object of a meteor stream such as the Taurids. The two branches of the stream, Northern and Southern Taurids, and its long period of activity from September to January suggest the stream is very old and massive, likely the result of a gradual disintegration of a very large comet. The Earth crosses the Taurid stream also in late June, when it produces two daytime meteor showers.

“I was looking down, and I thought someone suddenly pointed their car headlights towards me, then I realized it was a fireball in the sky!” said storm chaser and photographer Marko Korošec as he caught the first Taurid fireball of the season. “Brilliant Taurid fireball lit up the sky here!!”, “I thought some wise guy was shining a spotlight at me, then I realized what it was: a fireball in the southern sky!” and “The sky lit up very bright, in the corner of my eye I saw a fireball …” are just some reactions of people who were lucky enough to see Taurid fireballs. The Taurids have long been associated with bright meteors and fireballs, and rightly so, as they produce some of the brightest meteors of any meteor showers. Taurids produce bright fireballs quite regularly, but there are some years that are particularly good. 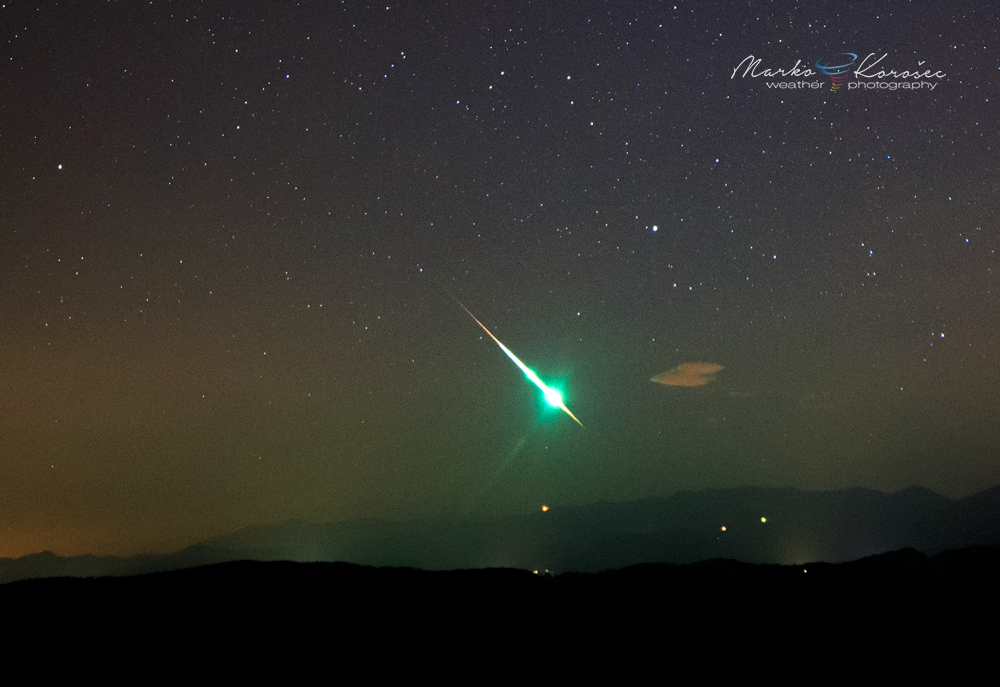 “I was looking down, and I thought someone suddenly pointed their car headlights towards me, then I realized it was a fireball in the sky!” Photo: Marko Korošec.

Every several years the Earth encounters a denser part of the Taurid stream, filled with larger bits and pieces of comet Encke (called ‘meteoroids’). This part of the stream is dubbed ‘the resonant swarm’. Usually meteoroids slowly disperse, but this part is kept together by an orbital resonance with Jupiter: for every 7 orbits around the Sun that the meteoroids make, Jupiter makes 2. This effect prevents the meteoroids from dispersing and keeps this part of the stream more dense. This is no trivial enhancement in activity of the shower: the activity of the shower may increase 2 to 4-fold and the relative percentage of large fireballs may increase by just as much. Brilliant Taurid showers were reported in: 1954, 1981, 1995, 2005 and 2015. Interestingly, in June 1975, at the time of the swarm encounter with the daytime branch of the Taurids, seismographs on the surface of the Moon left there by Apollo astronauts recorded a cluster of earthquakes, probably caused by Taurids impacting the Lunar surface!

In 2015 the Taurid swarm produced an exceptional shower of fireballs, lasting from the last week of October until the second half of November. Astronomers from the Czech Academy od Science, operating a network of all-sky cameras designed to monitor the night skies for bright meteors and possible meteorite falls, recorded nearly 200 Taurid fireballs. The biggest event, a brilliant fireball (called a ‘superbolide’) over Poland, was caused by a piece of Encke weighing well over 1000 kg, over a meter across. During the same shower, US DoD satellites detected a meteor over the Pacific, likely a Taurid, over ten times larger.

The precise images of fireballs enabled the Czech astronomers to determine the orbits of incoming pieces of Encke. Then they looked through the database of known Near-Earth Asteroids for similar objects. And they found them, several objects from several tens to several hundred meters across, embedded within the Taurid stream. The largest objects, designated 2015 TX24 and 2005 UR, measure 200-300 m across. Being fragments of comet Encke, or their combined parent, these objects are dark and difficult to see – their surfaces are darker than fresh asphalt, and they reflect very little light. It is very likely, that there are more as of yet unknown large pieces of Encke within the Taurid stream. These findings indicate there is a significant increase in impact hazard during the Taurid meteor shower.

Indeed, the largest historic impact may well have been caused by a large piece of comet Encke. The June 30, 1908 meteor blast in Tunguska, Siberia which was equivalent to an explosion of 5-20 megatons of TNT. That is equal to some of the largest hydrogen bomb explosions and hundreds of times more than the Hiroshima bomb. The blast flattened over 2000 square kilometers of forest and incinerated trees tens of kilometers away.

But worry not, most Taurids are just tame, pretty streaks of light and a real visual treat. For most of the time from early September way into January the shower only produces about 1 or 2 meteors per hour, but around their peak in late October and the first half of November, their activity climbs to about 6-7 meteors per hour and up to 10-20 meteors per hour in the most favourable years. Impacting the Earth’s atmosphere at about 28 km/s, Taurids are relatively slow meteors, quite easily distinguishable from other any other active meteor shower. They are often colorful and produce bright bursts along their path. They are visible throughout the night, and you are most likely to see them in the hours just before and after local midnight. Being slow, bright and colorful they are excellent targets for meteor photography! 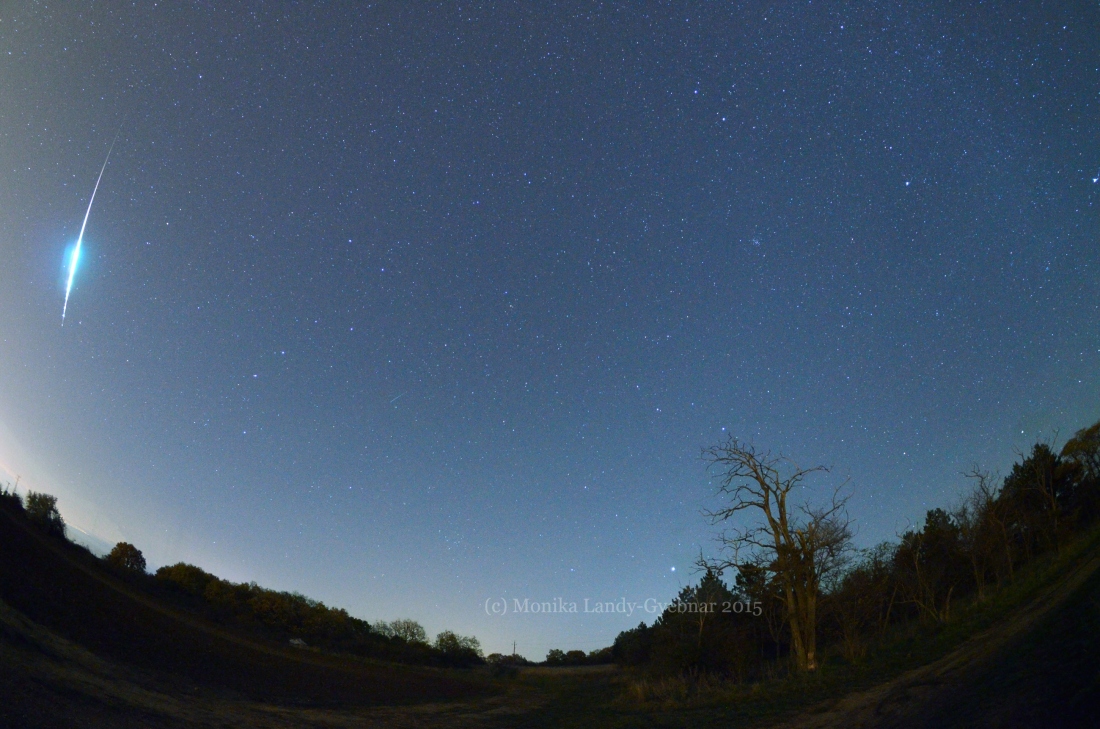 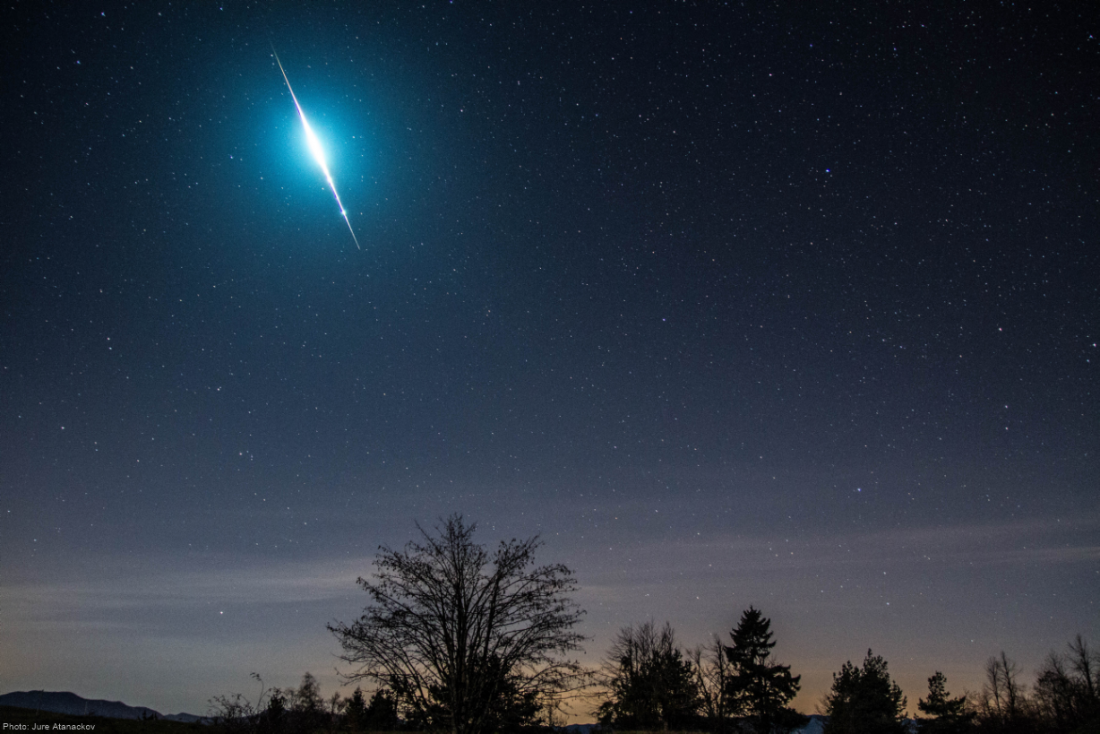 When things go spectacularly right: a brilliant fireball (meteor), this one from the Taurid meteor shower. This meteor was brighter than the full Moon and lit up the sky and landscape. Photo: Jure Atanackov. 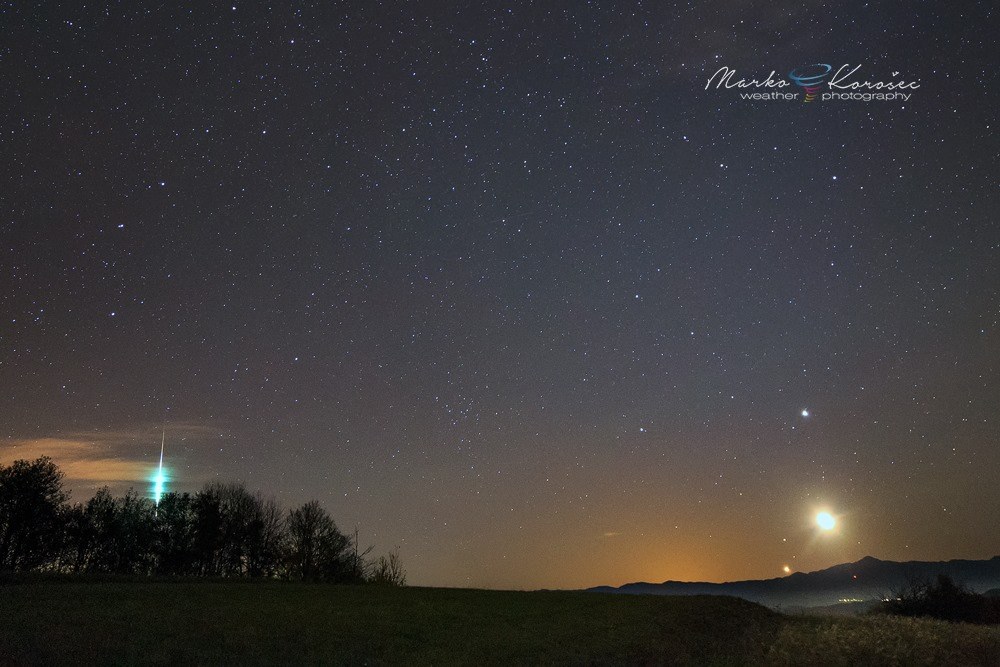