As if the pandemic wasn’t enough, a peculiar situation is now developing in Ukraine, where wildfires are nearing Chernobyl, the site of the nuclear disaster in 1986.

Fires have emerged around April 4th in the Chernobyl’s exclusion zone, the 30-kilometer area around the former nuclear reactor, where authorities have prohibited people from living. The fires were started by locals, burning the dry grasslands near the exclusion zone. The image below is a satellite capture from NASA/MODIS, showing the smoke from the fires on April 10th. 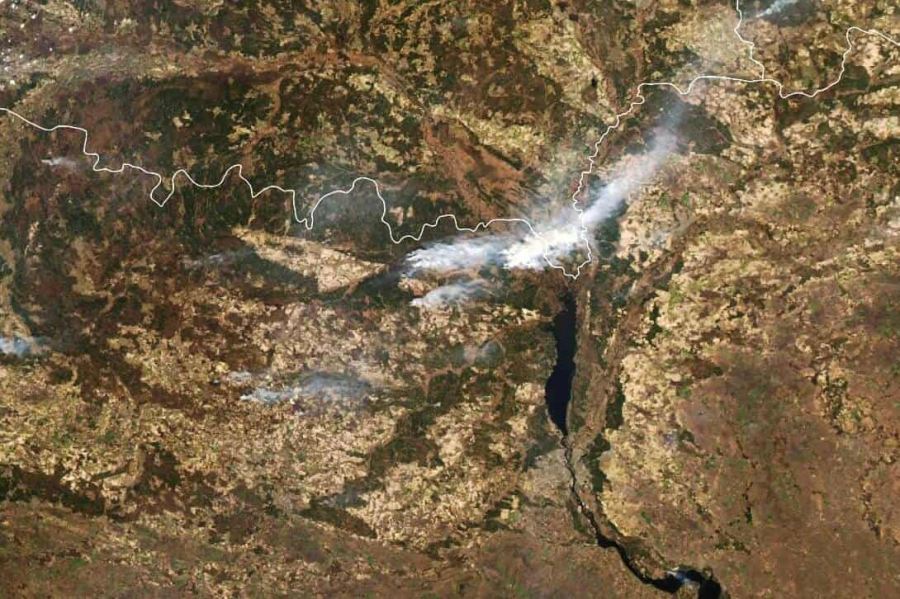 Wildfires in the region have spread to just over a mile from the defunct Chernobyl nuclear power plant and a disposal site for radioactive waste. More than 300 firefighters were battling the fires. The image below from FIRMS shows the hotspots detected by satellites in the past 24 hours, where we can see the fires nearing the nuclear complex of Chernobyl. 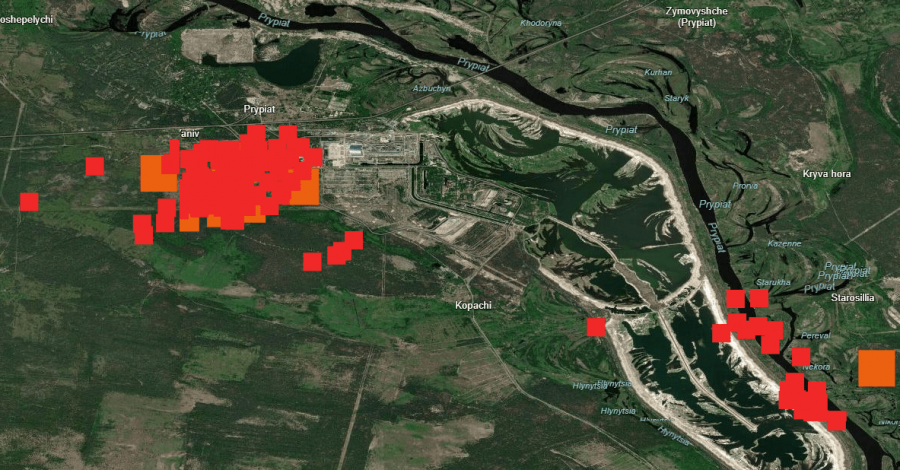 Wildfires in #Ukraine have spread to just over a mile from the defunct #Chernobyl nuclear power plant and a disposal site for radioactive waste, according to activists, as more than 300 firefighters work to contain the blaze. https://t.co/LMLCA02Sqg https://t.co/96MuG89UG1

The main concern is not the fire reaching the reactor facilities or waste storage since they are not exposed directly to the fire. The problem is the burning of the forests and dry grasslands around the nuclear complex, since the area far around is still radioactive from the disaster in 1986. When fires burn the radioactive biomass, the particles that are released are also radioactive and can be carried by the winds, along with the smoke.

Now the fire reached #Pripyat and is located two kilometers directly from the Pidlisnyy radioactive waste storage facility, which houses the most highly active radiation waste of the entire #Chernobyl zone and from the Chernobyl NPP pic.twitter.com/nge1lHVleP

We created graphics from the NASA Geos-5 forecast system, which simulates the smoke from the Chernobyl fires, tracked as carbon monoxide loading. The first image is from yesterday, where the smoke was moving towards the north. The oncoming cold front has changed the wind direction which is now projected to send the smoke clouds (with potential radiation) towards the south and south-east. That would take the smoke over the capital of Kiev, and further towards the south into the Black Sea. The less likely (but plausible) scenario is, that the fires would spread even further, creating more radioactive smoke, which could spread west towards central Europe if the winds would be from the east. The current danger is limited to the surrounding areas and towards the Black Sea, but the situation will be monitored closely. 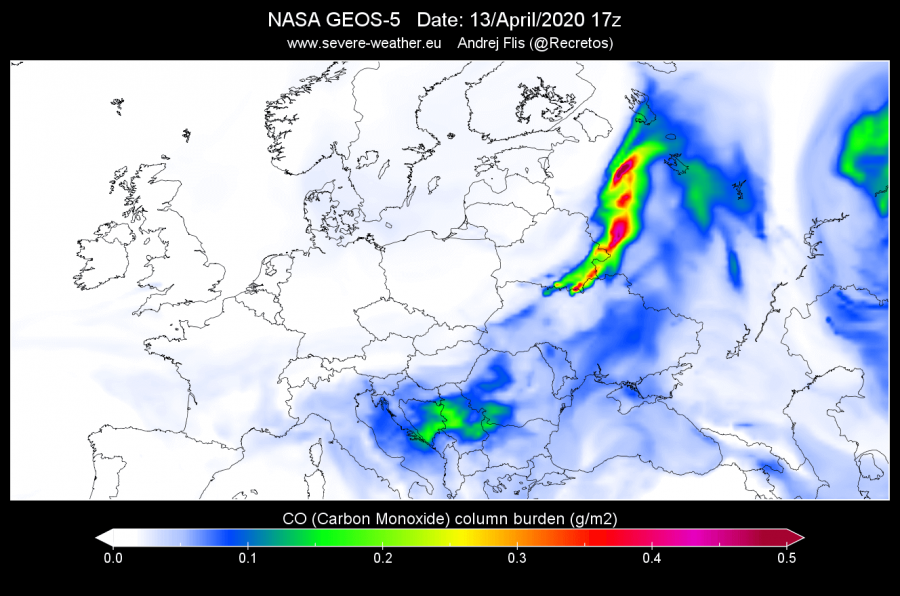 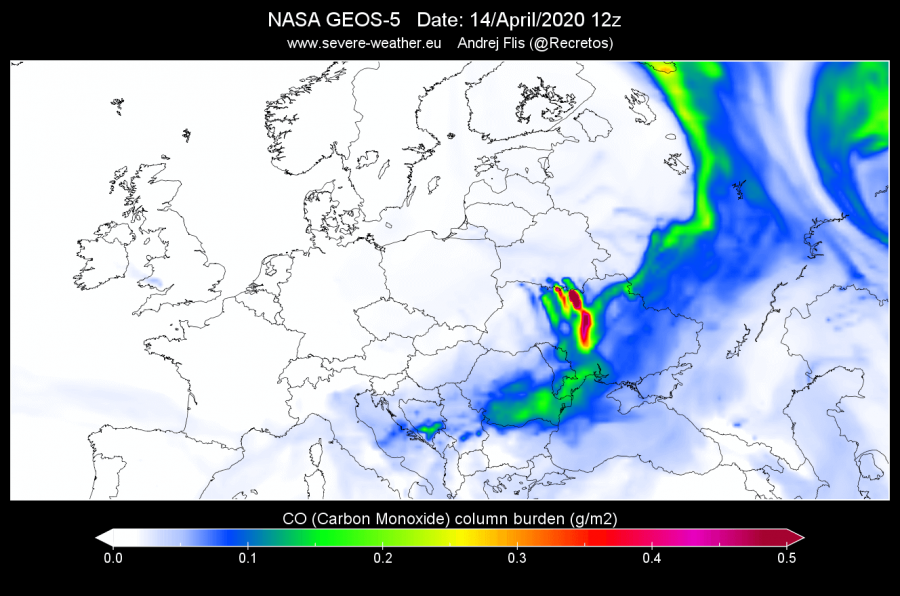 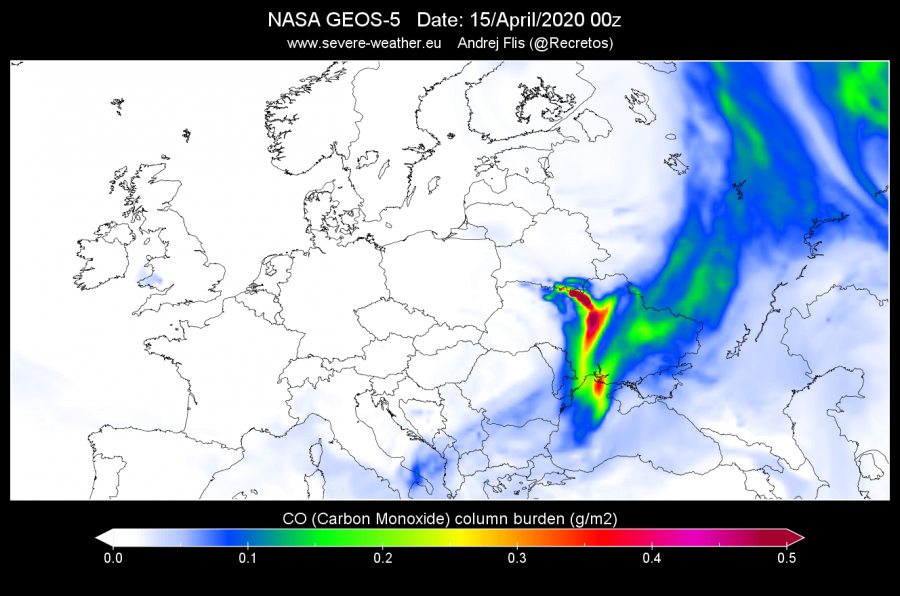 The radiation levels have already been measured to rise above the normal values, while the authorities in the capital are for now reporting normal values in Kiev. But that could change if the smoke with the radioactive particles would turn towards the south, directly over the city.

Brush fires near #Chernobyl have radiation levels to 16 times above average after an unusually warm winter turned the forested exclusion zone into acres of dry grass pic.twitter.com/jofGuGKxUh

A bus ride in the #Chernobyl exclusion zone tonight. Unfortunately no exact location was given #chernobylfire pic.twitter.com/rkM7pK9rcI

The fires have spread quite fast during the weekend, due to strong winds, making it very hard to contain it. Some relief has come tonight, as a cold front has brought rain to help fight the fires, and extinguishing some of the hotspots. Firefighters are on alert, to monitor the situation, as the weather provides aid with rainfall.

We will keep you updated on any important further development. While you wait for more updates, check out our latest monthlt analysis, which shows that March 2020 was a true transitional month, bringing cold to the mid-latitudes, and also brought spring three weeks earlier than normal to large parts of the USA: