Here comes the best meteor shower of the year – the Geminids! This is by far the best and most exciting celestial fireworks display of the year. Make sure you see it – here is how. 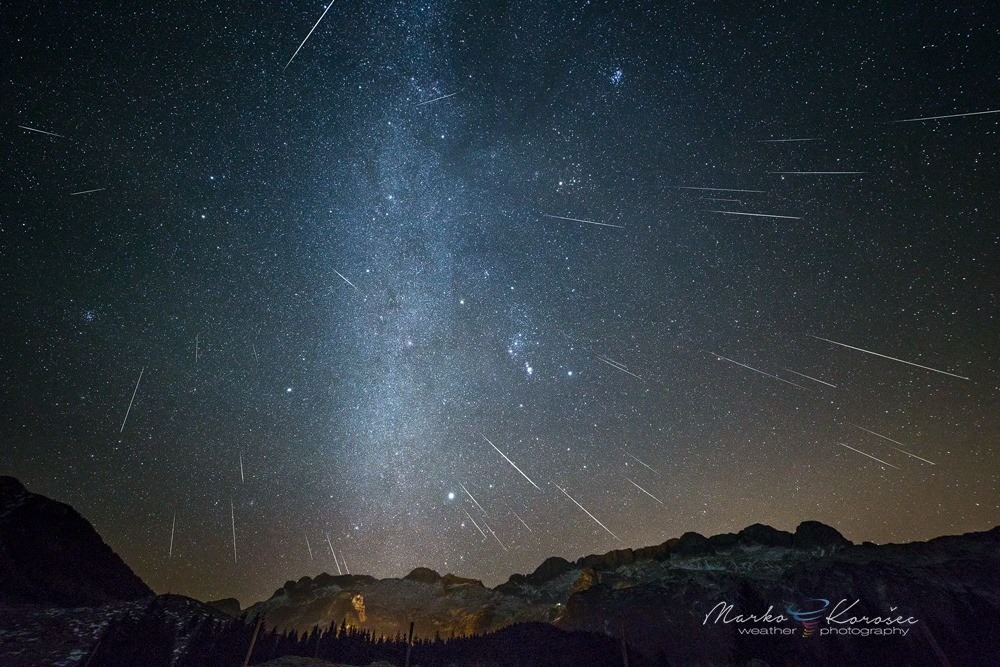 Geminids in the skies above the Julian Alps, Slovenia. Composite photo of several 10s of exposures. Photo: Marko Korošec.

The Geminids are by far the finest annual meteor shower! Large numbers of meteors? Check. Bright, colorful meteors and fireballs? Check! Loads of fun under the night sky? Check! And in addition to being the strongest and most impressive annual meteor shower, it is also a bit of a cosmic oddball. Here is why.

Phaethon is a relatively small space rock: it is only about 5.8 km in diameter, it orbits the Sun in a very elongated elliptical orbit that takes it into the inner parts of the Asteroid belt at its farthest from the Sun, to well within the orbit of Mercury at its closest to the Sun. It is also designated a Potentially hazardous asteroid, as it can come as close as 2.9 million km to the Earth (7.6 Earth-Moon distances). It currently poses no impact threat for Earth, but that could potentially c

Meteoroids – dust particles that produce meteors – of most meteor showers come from comets. They are released from the comet’s nucleus by outgassing as the comet rounds the Sun and warms up. An asteroid does not contain volatile ices that could produce outgassing as it rounds the Sun. So the mechanism by which Geminid meteoroids are released from asteroid Phaethon is still a mystery. Observations have shown it to occasionally brighten and develop slight cometary features when it is close to the Sun, so some researchers are calling it a ‘rock comet’, proposing that bits and pieces are breaking off the asteroid. Indeed, the surface of the asteroid heats up 700 °C as it rounds the Sun more than twice as close as the scorching hot Mercury, producing thermal stress on the rock on the asteroid’s surface as well as breakdown of clay minerals. This material is then blown from the asteroid’s surface by the Sun’s radiation pressure. Other researchers argue that the amount of Geminid meteoroids is so great it could only have come from the breakup of a larger parent asteroid, with the largest remnant being the 5.6-km Phaethon.

The first time Geminids were noticed was in the 1830s. There are no sightings of the shower prior to that. It is highly unlikely that the Geminids would have been missed – other annual meteor showers, such as the Lyrids, the Perseids and the Leonids had been observed for centuries. Since the first sighting less than two hundred years ago the Geminid meteor shower has been increasing in strength and is now the strongest annual meteor shower, by quite a significant margin.

A bright Geminid streaks down towards the peaks of the Julian Alps. Photo: Jure Atanackov.

How, where and when to see the Geminids?

Here is another area in which the Geminids excel. Unlike most other meteor showers, the Geminids can be seen well already in the evening hours. In fact, Geminids can be seen throughout the night! The visibility of the meteor shower and the number of meteors is closely tied to the position of the constellation of Gemini in the sky. All Geminids will look like they come from a point in the sky in the constellation Gemini (the Twins): even on the other side of the sky, if you trace a Geminid’s track backward it will come to Gemini. This point in the sky is called the radiant. The higher the radiant is in the sky, the more meteors appear. In the early evening hours the radiant is low in the eastern sky, rising higher in the sky during the evening. It is the highest around midnight and into early morning hours, when the activity of the Geminids will be highest. The activity diminishes towards the dawn as the radiant descends into the western sky, but there will be plenty of Geminids in the sky just before dawn.

To see the Geminids you will not need a telescope or binoculars, just your naked eyes. Take a lawn chair with you. Find a location as far away from light pollution as possible. The darker the sky, the more meteors you will see. Dress appropriately! Chances are it will be freezing cold, you need to dress warm. Dress twice as warm as you think is necessary, after half an hour or an hour (or more) of observing the sky you will quickly get cold. Also bring a snack or two to keep your energy up! Do not overdo it on warm drinks, as they can actually increase heat loss. And – most importantly – bring company, it will be much more fun!