This weekend the venerable Leonid meteor shower returns. It is a quiescent year for the meteor shower, but it will still produce a fine celestial show.

…the constellation Leo was climbing higher into the eastern sky. More and more Leonids were appearing, first one or two per minute, but soon the gaps between meteors were only several seconds long. As you still reveled in seeing a bright Leonid, a new one would streak through your field of view, producing a short-lived wake. Suddenly the sky lit up as a brilliant fireball blazed through Orion, leaving a bright train, first looking like an airplane contrail, slowly twisting into a snake-like shape under the effects of high-altitude winds. Meanwhile three more Leonids streaked through Orion in the next several seconds. Soon the Leonids were appearing in a continuous succession. One or two Leonids would appear simultaneously followed by a short gap of a second or so, followed by further Leonids – over 60 per minute. Bright Leonid fireballs and flashes from meteors behind your back punctuated the show, leaving smoky trains in the sky. There were three or more hanging in the sky at the same time. Looking around, there was a continuous rain of meteors just above the horizon, all the way down to the dark desert skies…

This is what the Leonids looked like in 2001. And as Leonid meteor storms go, it was not a big one. In 1966 the Leonids erupted into a huge meteor storm in which filled the skies with up to 40 meteor per second. Such events are exceedingly rare, happening about once every 30 years. So this year the Leonid meteor shower will return in more modest numbers, still providing a beautiful, colorful display of shooting stars. 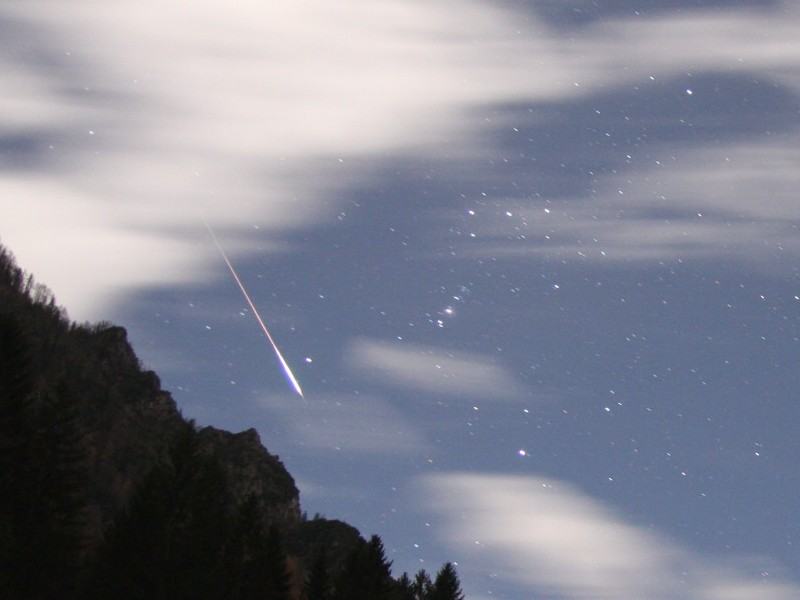 Bright Leonid fireball shoots through the constellation Orion, above the steep slopes of the Julian Alps, NW Slovenia on November 17, 2008. Photo: Javor Kac.

As the name implies, the Leonids radiate from the constellation Leo. Leo only rises around local midnight for much of the northern hemisphere, so you will not be able to see any Leonids in the evening hours. Leonid rate increases steadily in the morning hours, with the best show in the final predawn hour, with Leo high in the sky. The Leonids are swift meteors, hitting the Earth’s atmosphere at over 70 km/s! Many leave a short wake. There are also bright, colorful fireballs. If you are lucky enough, you get to see a brilliant Leonid: some of them can light up the sky and the ground, producing persistent trains that snake in high-altitude winds and remain visible for many minutes.

The Leonids can be seen from early to late November, but the rates are very low. This year the meteor shower peaks in the morning of November 18. Perfect timing, as that is Sunday morning! There is a bright waxing gibbous Moon in the sky for a large part of the night, however, it sets before 2 am, leaving the best hours for the Leonids dark. Expect about 10-15 Leonids per hour during the final hour before dawn. It will not be a torrent, but still a nice trickle of meteors.

How to best see the Leonids

Get to a dark location, far from urban light pollution. The darker the sky, the more meteors you will see. You do not need any optical instruments, no binoculars or telescopes to see the shower – just your eyes and an unobstructed view of the sky. Dress warm. November nights are very cold. Even more so when you remain still or move very little for prolonged periods of time. Have some company, it is more fun observing in a pair or in a group. It also makes those noises from small animals a lot less scary!

Got a camera? Why not try and make a photo of a Leonid meteor, a small souvenir. Here’s how to do it: