The next 7 days or so will be characterized by the buildup of a very strong anticyclone over the northern half of Europe and more unsettled, but generally very warm weather over most of the southern half of Europe. Temperatures will definitely feel a lot like summer just before the meteorological summer begins on June 1.

As the week progresses, most of the shallow cutoff lows over the southern half of Europe fill and only some marginal low pressure areas remain. Most notably the upper low currently over the central Europe moves towards southeastern Europe, reaching Greece by Thursday. It will have weakened considerably. The deep low west of the Iberian peninsula persists, remaining mostly stationary. Meanwhile a strong anticyclone establishes over the northern half of Europe, bringing very stable and warm weather. 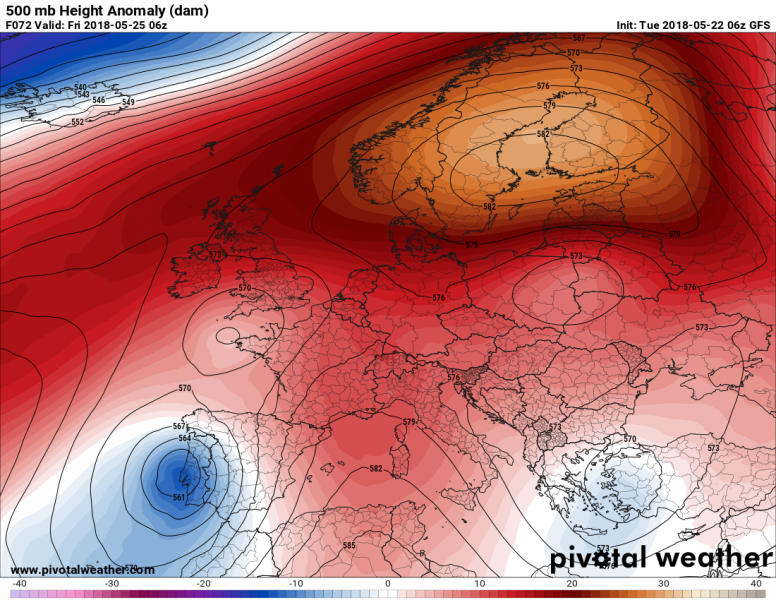 By the weekend, the a broad and very strong anticyclone will have established, stretching from Iceland across Scandinavia into northwestern Russia. The cutoff low W of the Iberian peninsula will have weakened somewhat.

Warm weather will dominate over most of the continent. Most of western and central Europe will climb to the upper 20ies by the weekend and locally possibly over 30 °C over the weekend and in the first days of the next week. Temperatures in the mid-20ies are expected over the Iberian peninsula and southern UK. The extreme western Iberian peninsula will likely be under the influence of the cutoff low and cooler, with temperatures closer to 20 °C.

Temperatures across eastern and southeastern Europe will also be gradually rising from daytime highs in the low to mid-20ies today towards mid to upper-20ies by the end of the week and the beginning of next week.

A Spanish plume situation will likely develop across western and central Europe as warm air is advected far north ahead of the cutoff low over the Atlantic / western Iberian peninsula. Some very impressive instability is indicated by GFS. While GFS is usually optimistic about instability, the situation certainly warrants monitoring. Severe potential of any storms developing in this zone will likely be limited due to rather weak shear, main threats will be torrential rainfall, severe straight line winds and marginally large hail. The area that will merit most attention will along the exit region of the jetstreak rounding the cutoff low. Any good overlap with instability will increase the threat for severe thunderstorms significantly. As the situation is still a number of days away it is too early for any forecasts.