Much colder days ahead for E-CNTRL Europe, warmer for W Europe

With a developed strong pattern dividing Europe in two halfs, a very cold airmass behind a deep upper low moving across ESE Europe will spread over east-central Europe, Balkan peninsula and N Turkey, therefore resulting in much colder days than average – 4-8 °C below normal! In response to a strenghtening upper ridge / high pressure across N Atlantic and W Europe, much warmer weather should be expected over British Isles and Iceland, locally 5-10 °C higher than average – especially in the higher elevations as lowlands could be trapped under inversion layer and cooler temperatures. 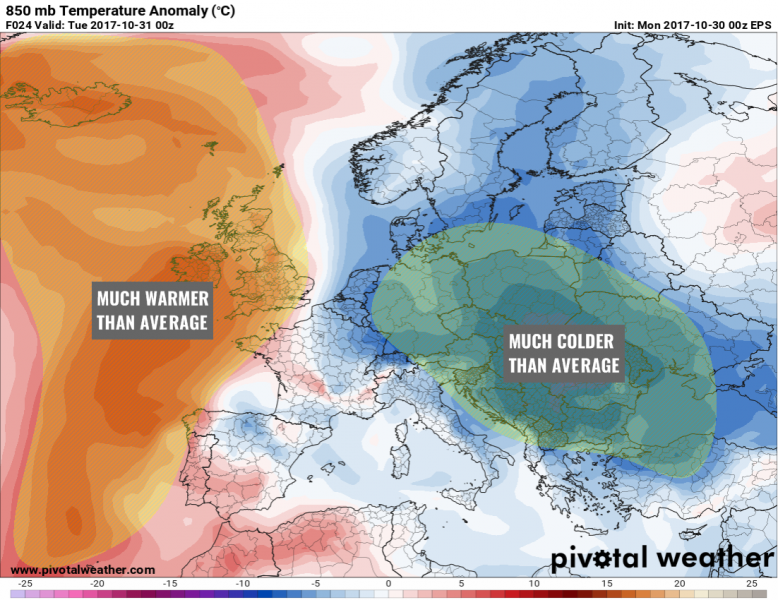 Upper ridge will gradually move towards central Europe tomorrow and advect warmer temps into the region pushing colder airmass into Black Sea / Turkey region. Still, cold frosty mornings are expected until Thursday across E-CNTRL and SE Europe. Some good amounts of snow are likely in the higher terrain of N Alps and Carpathian mountains overnight and tomorrow.

Strong pattern dividing Europe in two halfs - cold to the east, warm to the west
← Previous
Extreme warming in the Arctic over the next 10 days
Next →