We are experiencing a very intense stratospheric polar vortex lately, raging up to 600 km/h on top! It aids the overall pattern developed over the Northern Hemisphere, resulting in a positive AO/NAO cycle. This means numerous deep low-pressure areas/cyclones are forming over the North Atlantic, moving towards northern Europe. Today, a very large cyclone is developing and moving northeast, building up a broad wind field of hurricane-force winds. The potential is high for a violent windstorm spreading towards south Iceland and Faroe Islands late Tuesday night into Wednesday.

An impressive satellite presentation is already visible this afternoon, with a very large cyclone developing over the North Atlantic, centered south of Greenland. 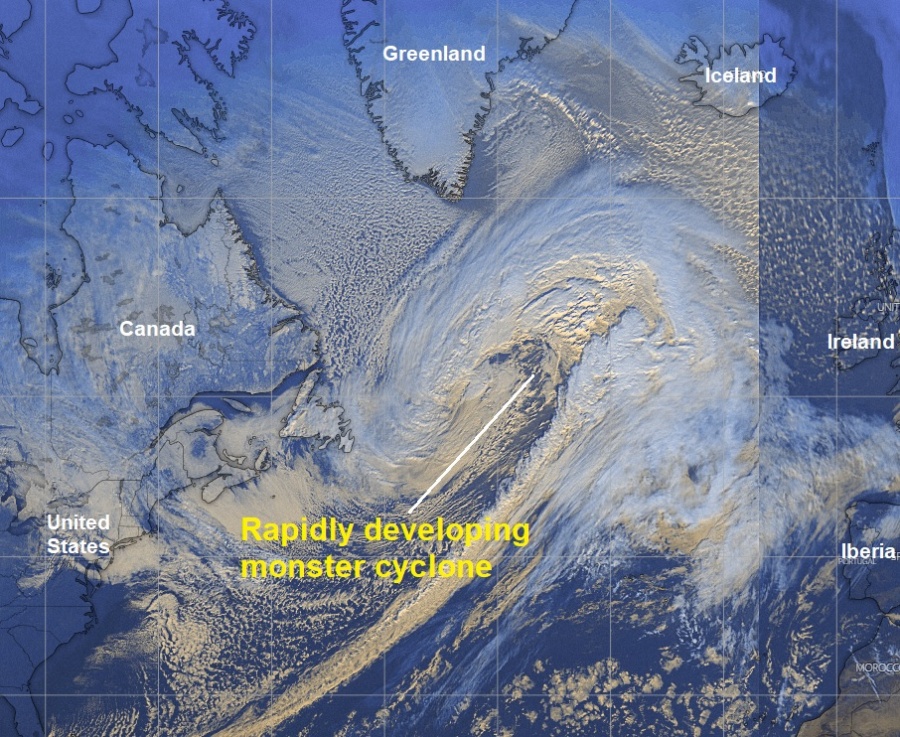 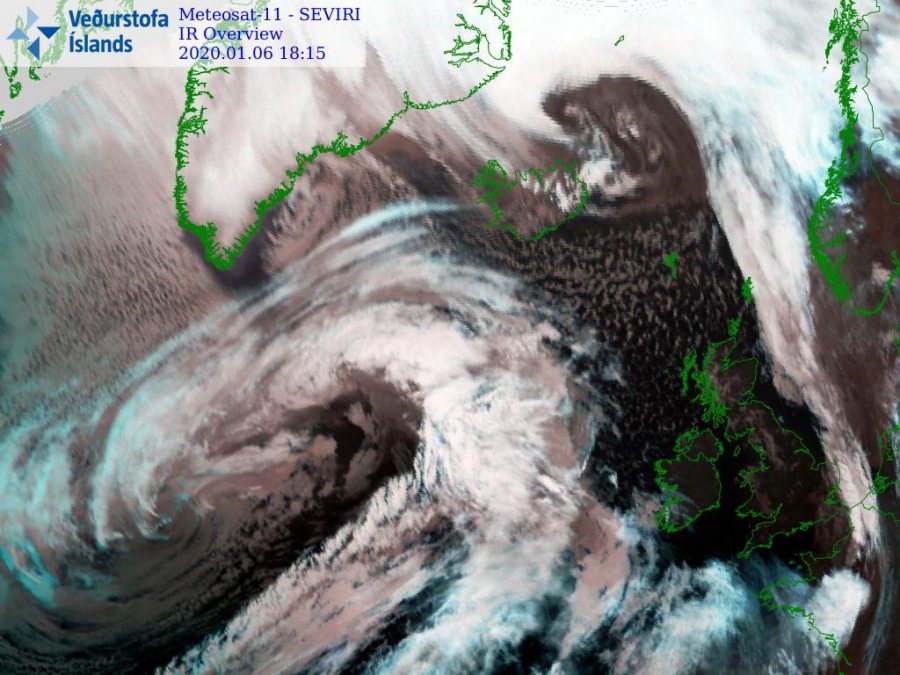 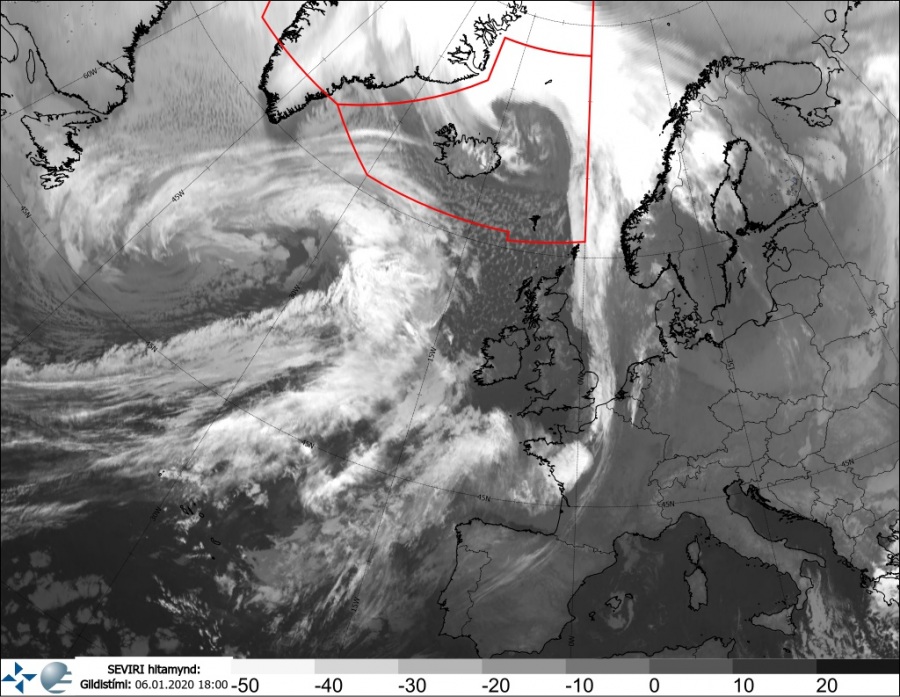 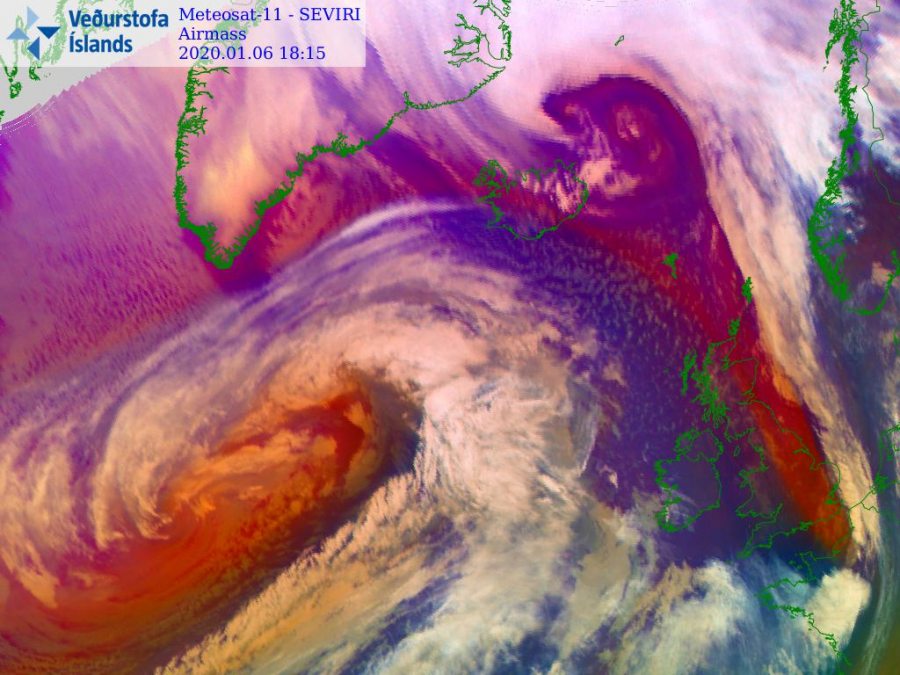 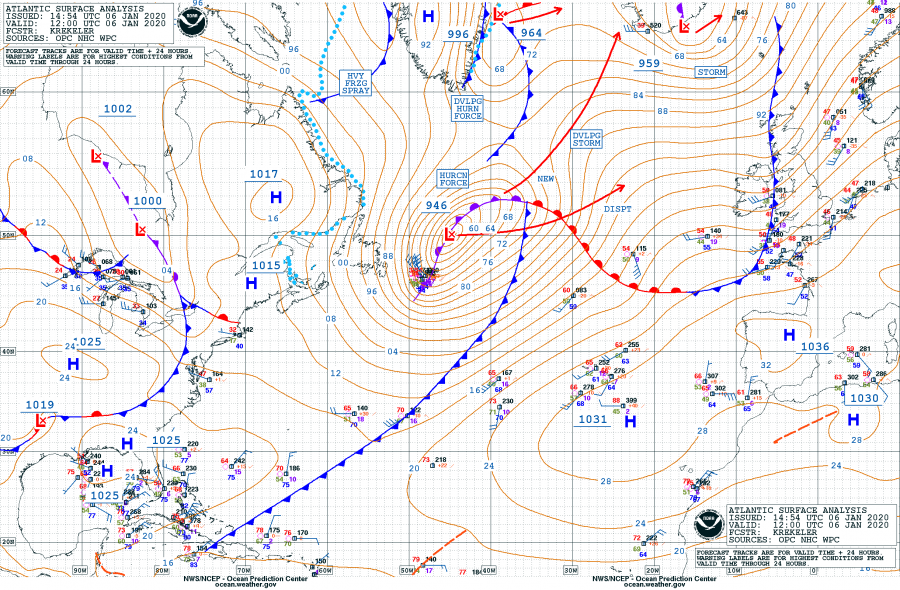 The pattern responsive for such cyclogenesis indicates strong upper-level ridging over continental Europe, while to the north a very deep Arctic trough expanded over Greenland and Iceland. A powerful SW-erly jet stream is located between these large scale features. 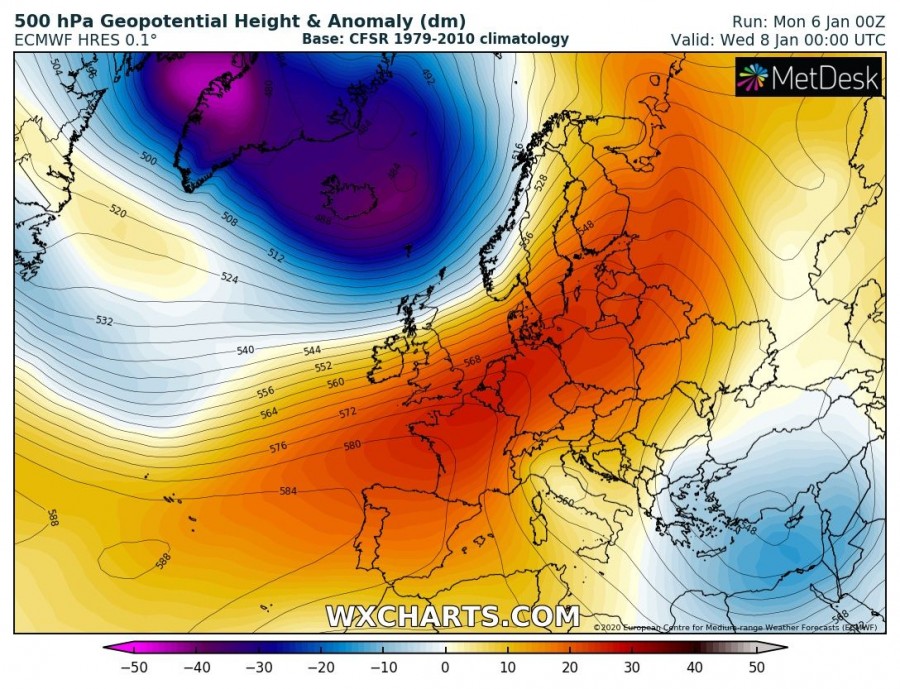 Tonight, the whole system will have two deep cores at the surface. One cyclone is located northeast of Iceland while another one is the large one we discussed earlier further west over the North Atlantic. The latter is moving over Iceland on Tuesday during the day and deepening below 945 mbar. While overnight to Wednesday, both cyclones merge together into a very large and extremely deep cyclone over Iceland and the Greenland Sea – the minimum central pressure is likely to drop to around 935 mbar! The system will be drifting northeast through Wednesday while gradually weakening on its way towards Svalbard. 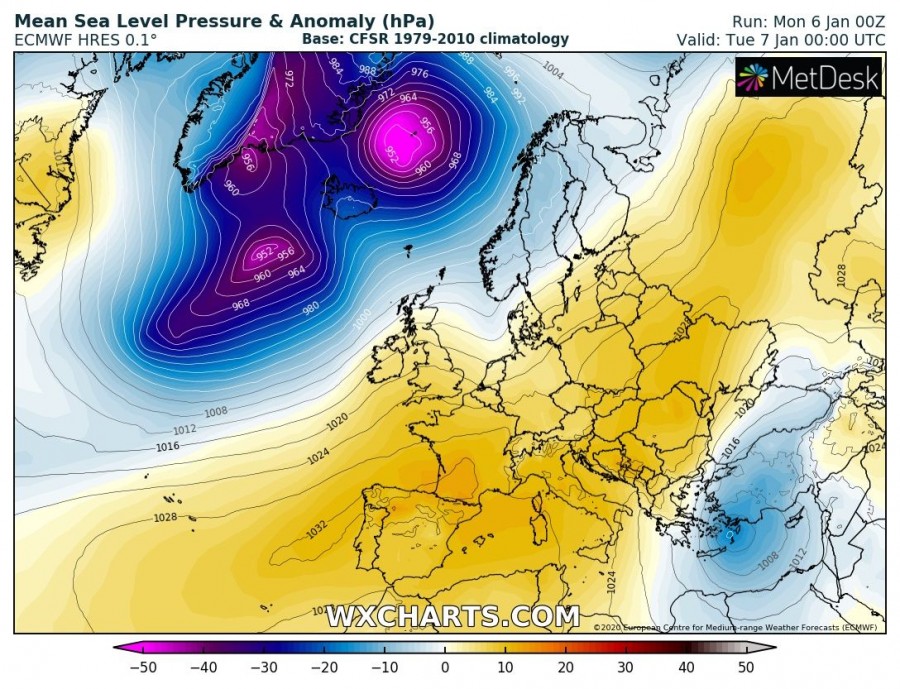 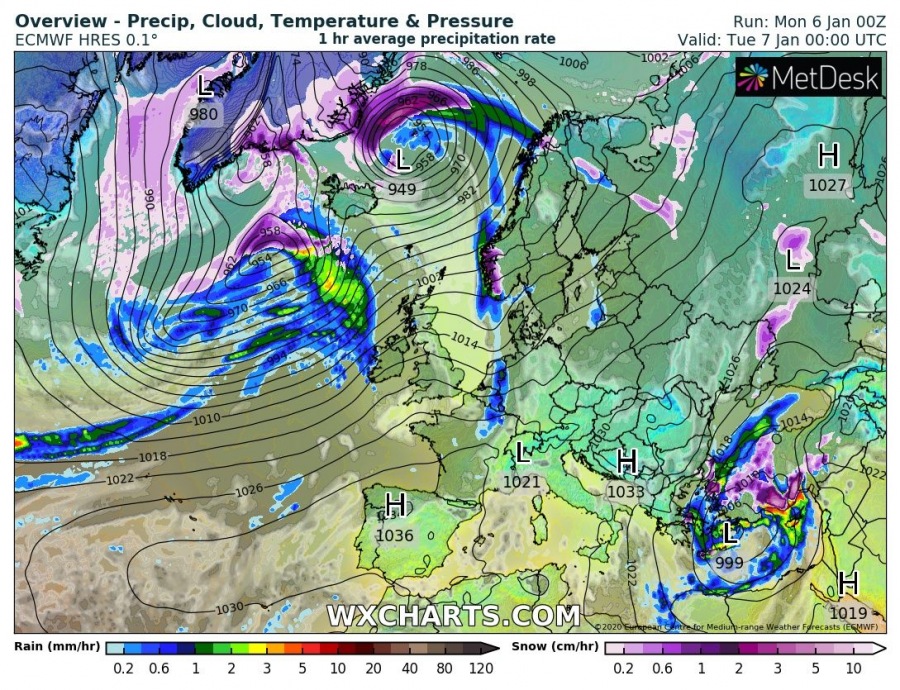 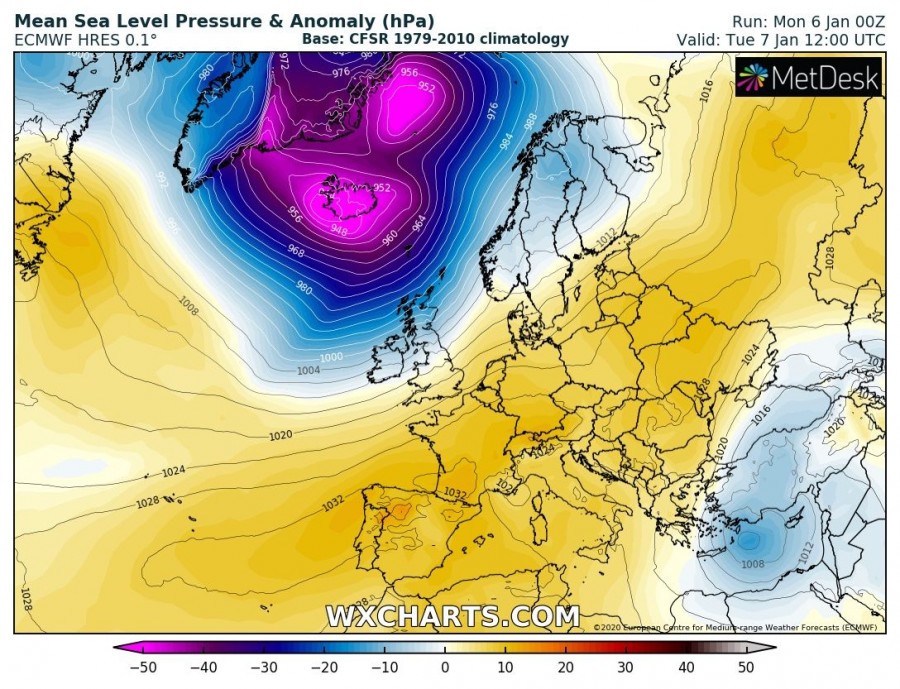 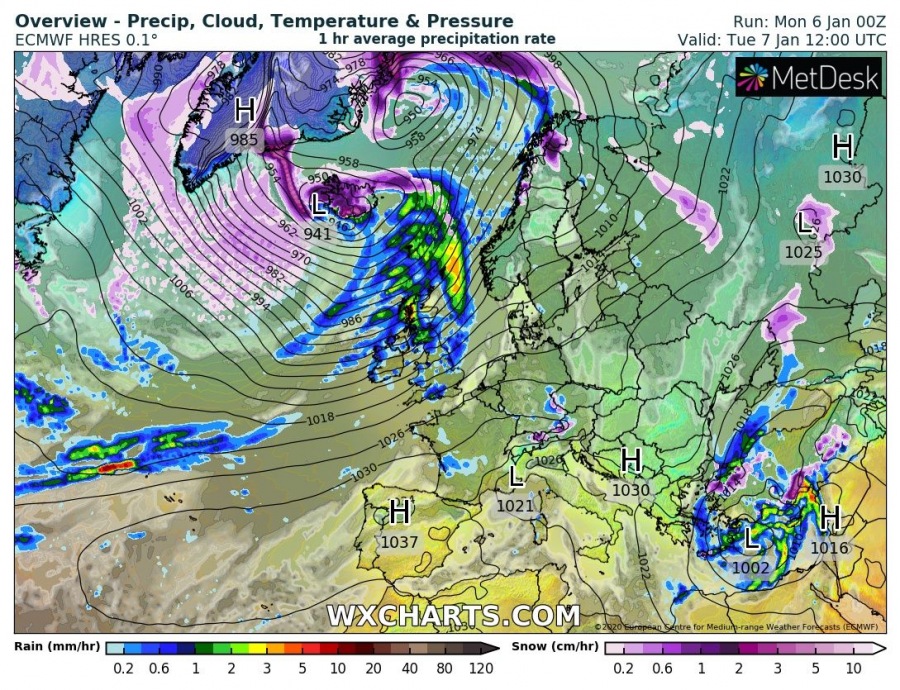 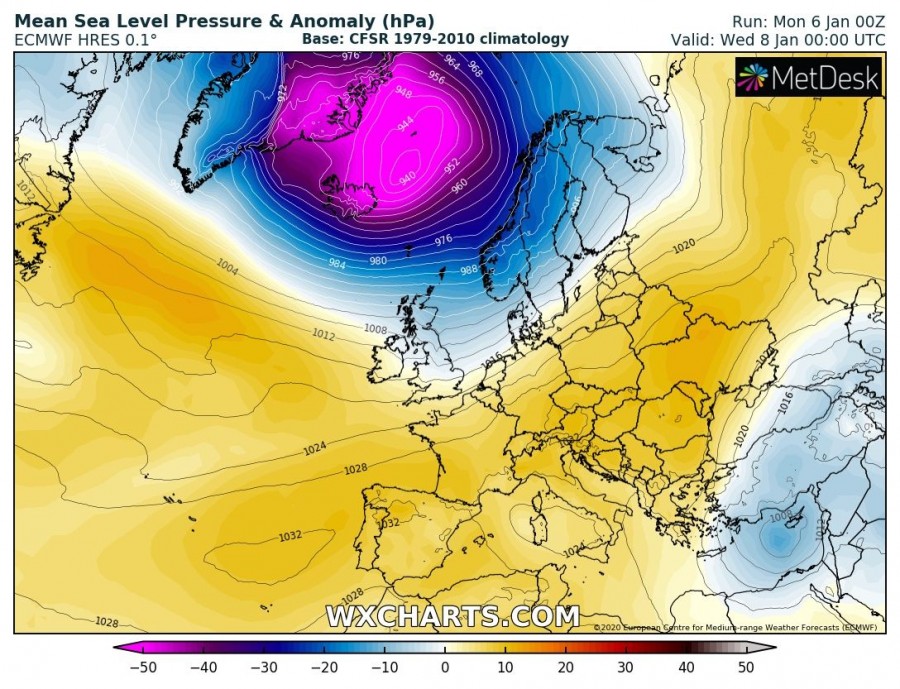 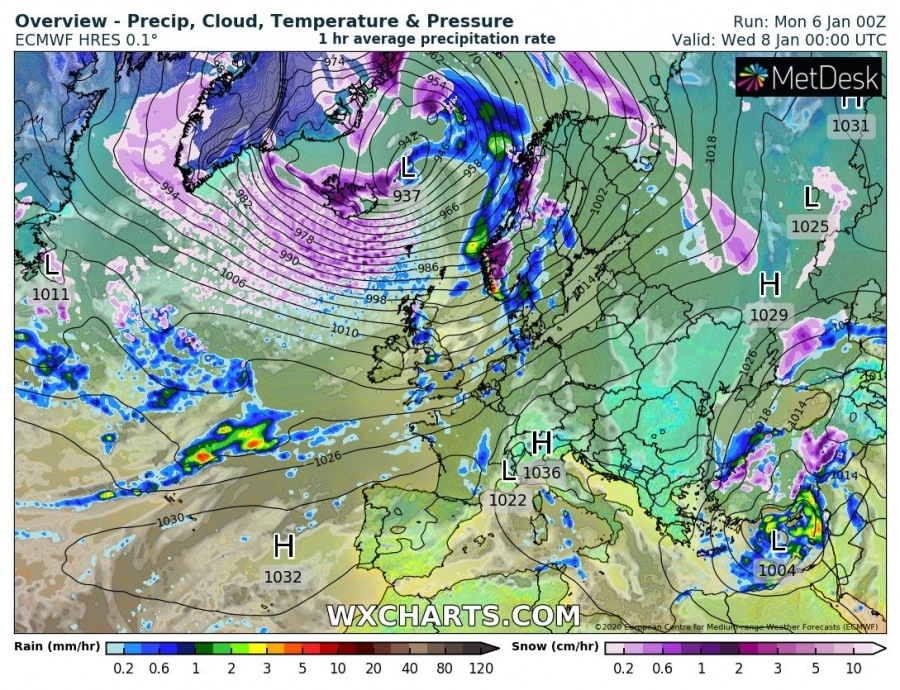 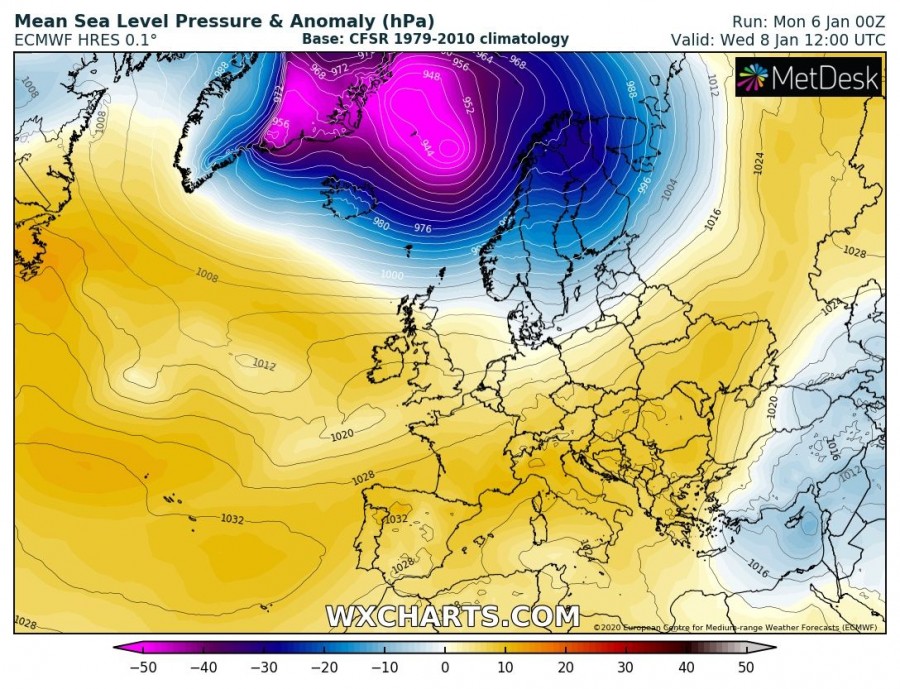 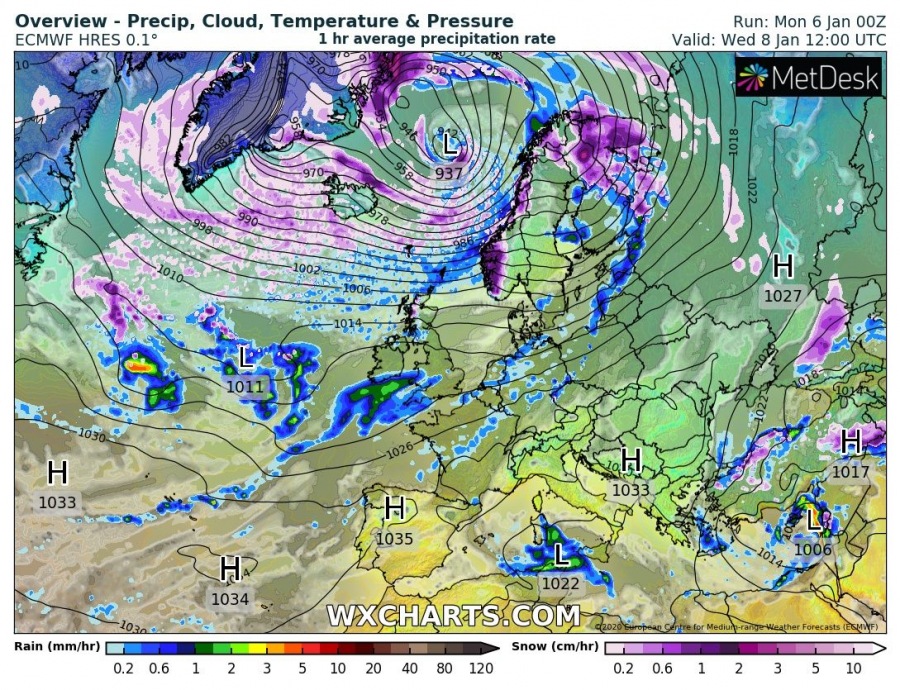 All models are in very good agreement developing a powerful windstorm across a large part of the North Atlantic, with maximum gusts locally exceeding 150 km/h and even higher in the mountains. The highest peaks and the most exposed areas are likely to peak above 200 km/h! 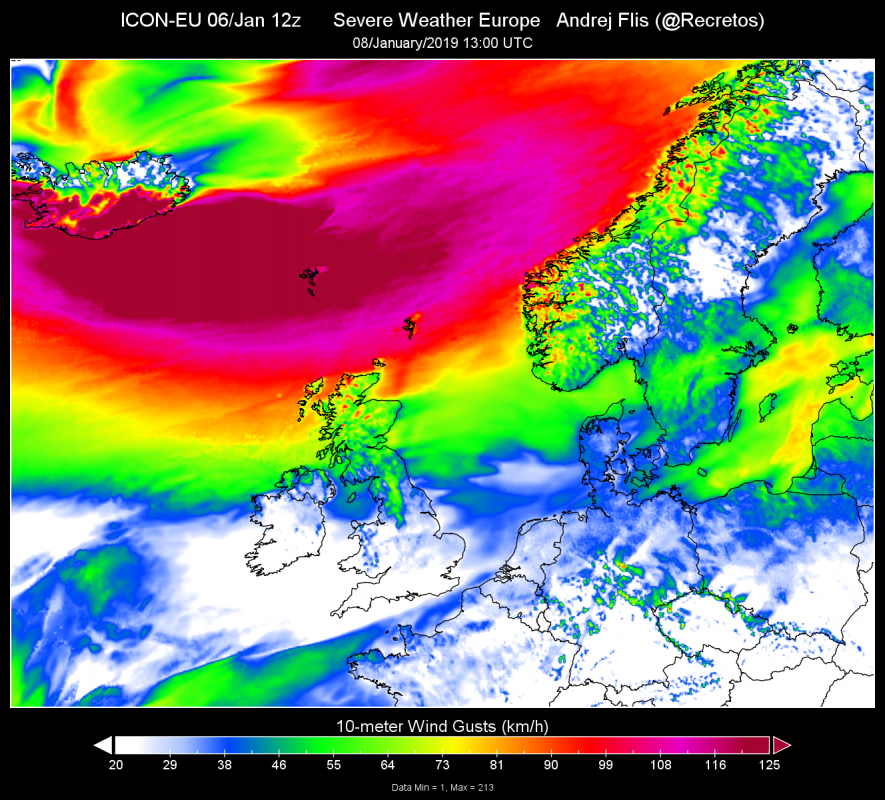 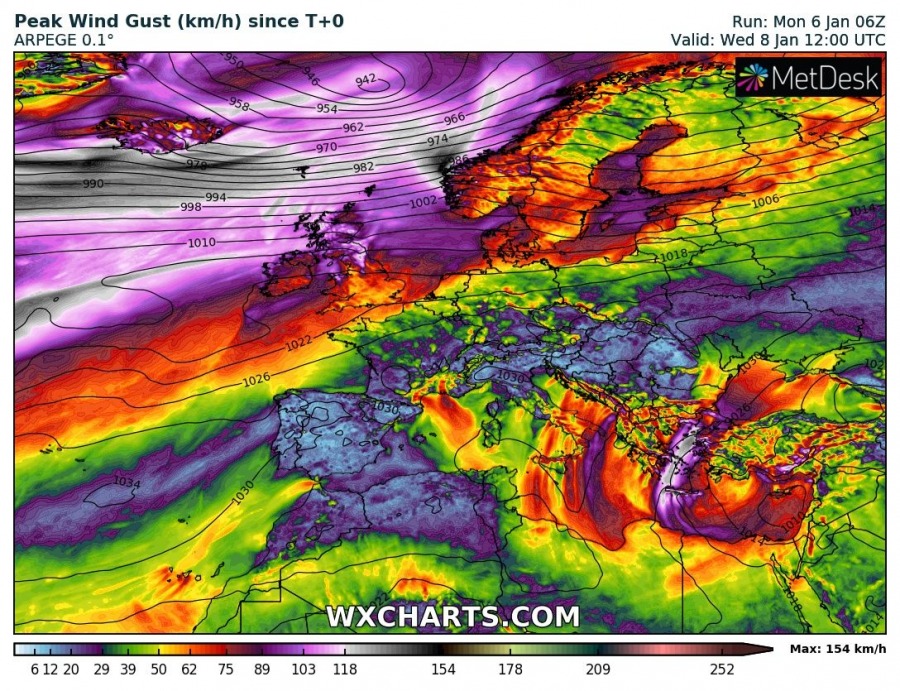 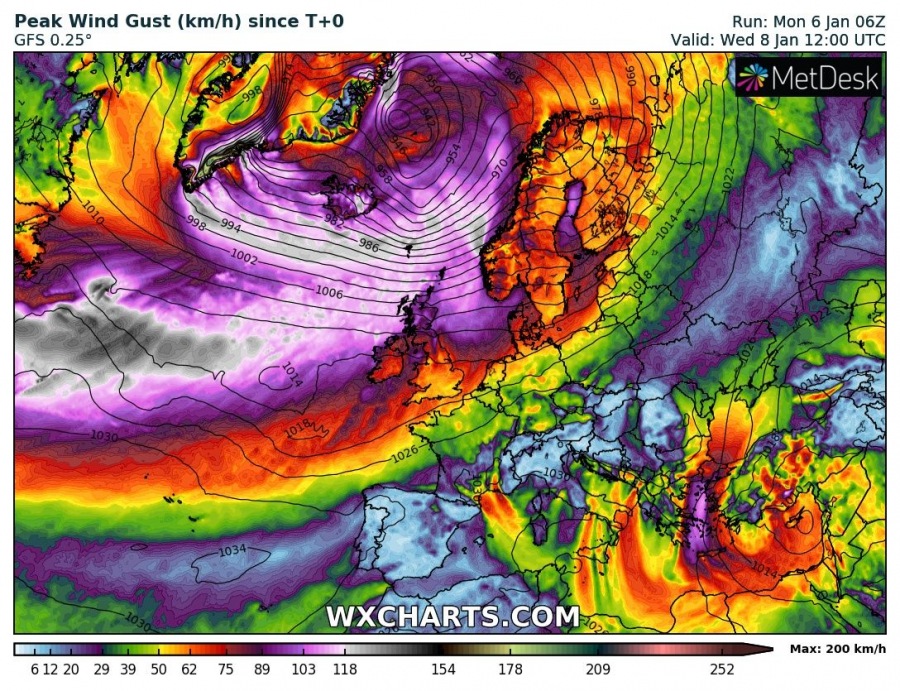 Here is a zoomed-in map of wind gusts across the North Atlantic on Wednesday morning – we can see a broad area is extremely severe winds, extending from south Iceland across the Faroe Islands towards North Scotland and towards coastal Norway. Such wind direction usually delivers violent winds into the Faroe Islands, easily pushing 150-180 km/h in many exposed areas in the complex topography, possibly even higher. 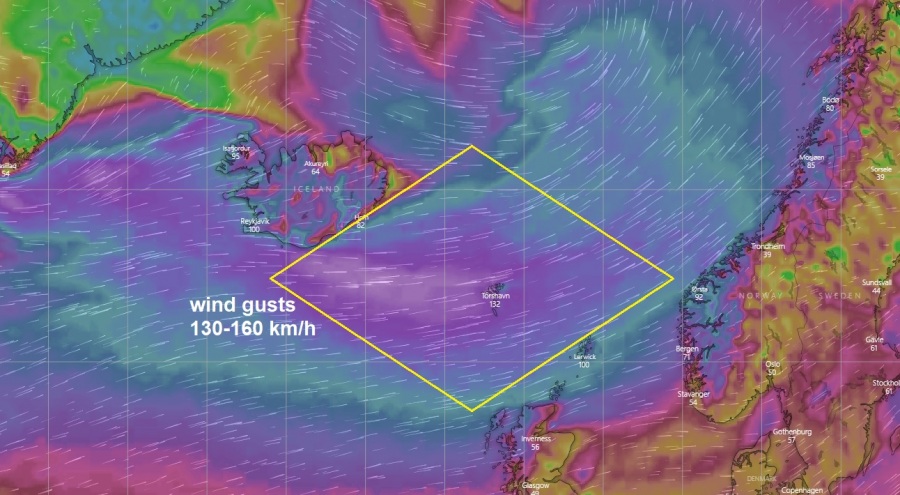 Here is the animation of the 10 m peak wind gusts across the North Atlantic – the broad swath of extremely severe winds is nicely visible developing south of Iceland, being pushed towards the Faroe Islands. Note that the major waves are usually developing slightly to the southeast side of the main wind maximum – that is right to the west of Faroes and directly onto them! Animation was produced by our team’s admin, Andrej Flis.

Zoomed-in map of peak wind gusts over Scotland until Wednesday afternoon, a broad area of above 120 km/h is seen over the Atlantic, spreading also over western Scotland. The Scottish Highlands are likely to peak above 200 km/h (e.g. Cairngorms). 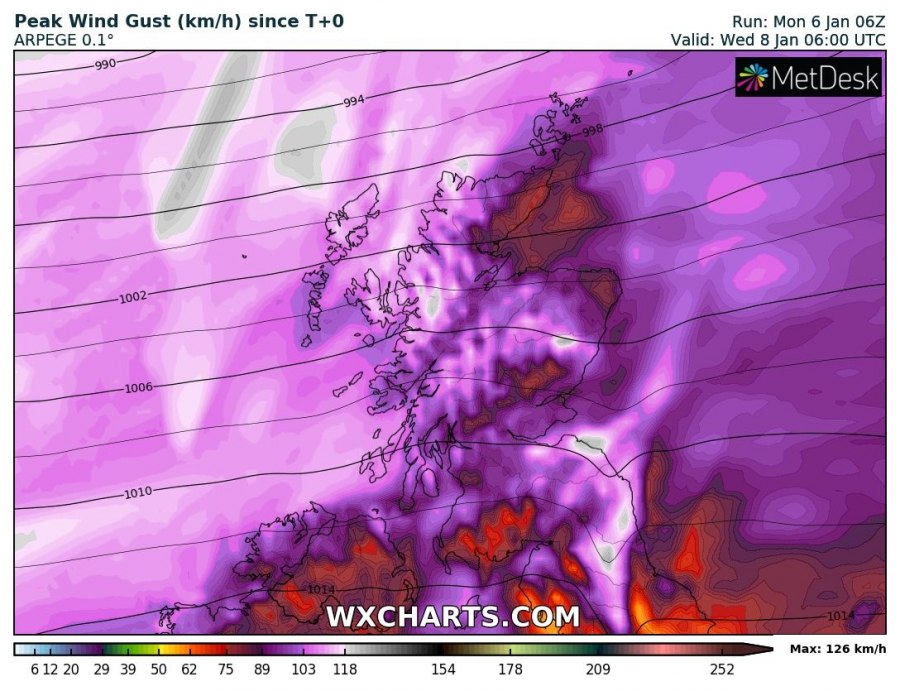 The main focus from the whole system with the severe windstorm developing are very significant sea waves, those are likely to be extremely high and push above 15 meters (Note: the scale on the map is in ft (feet) – 48 ft = 14.6 meters)! 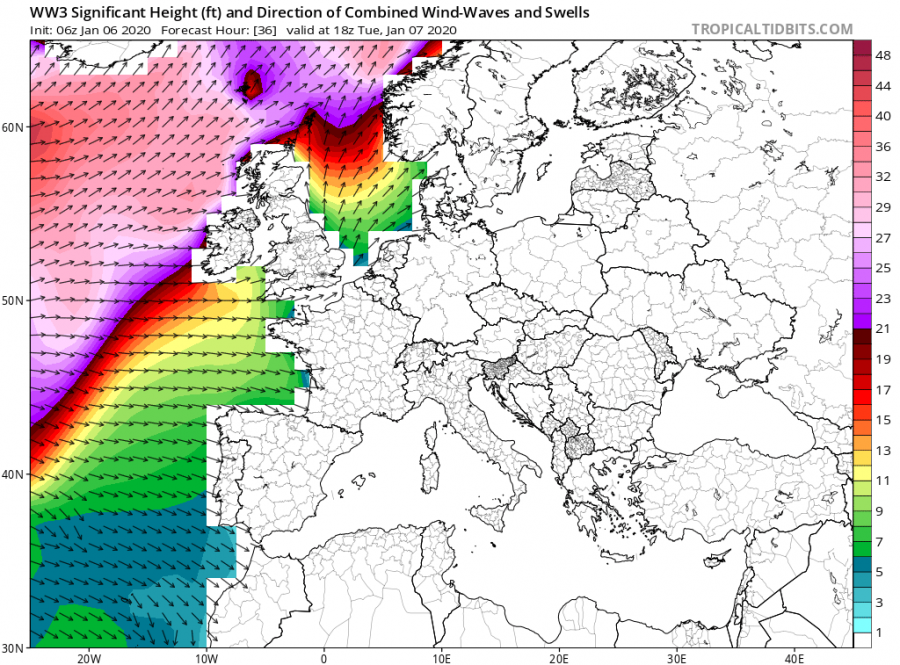 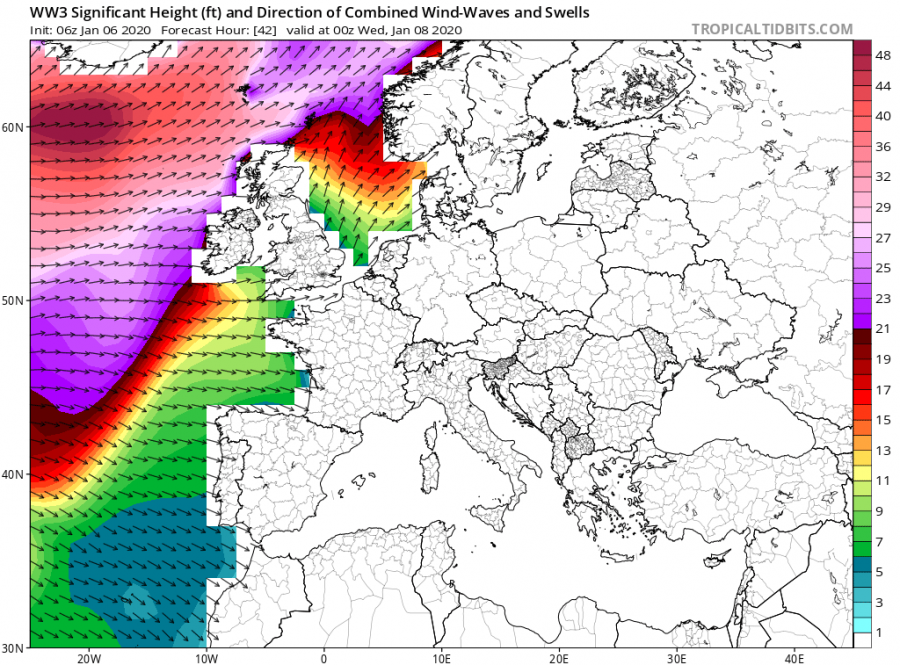 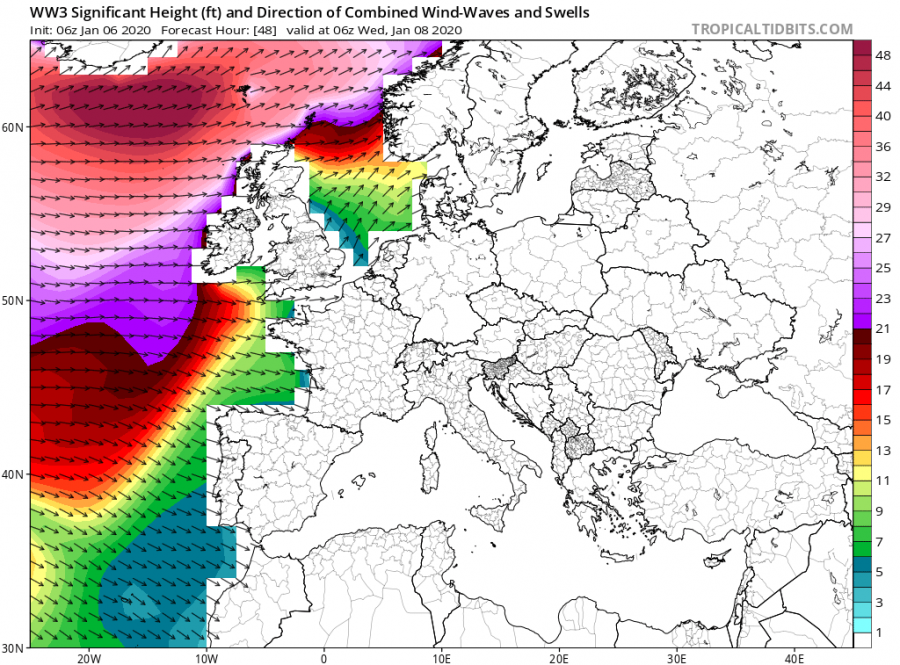 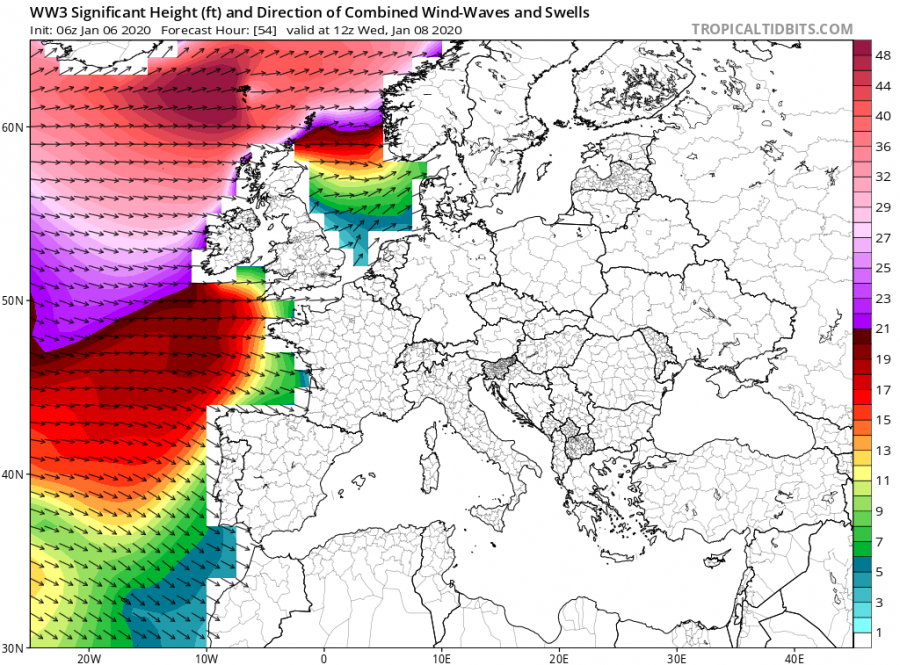 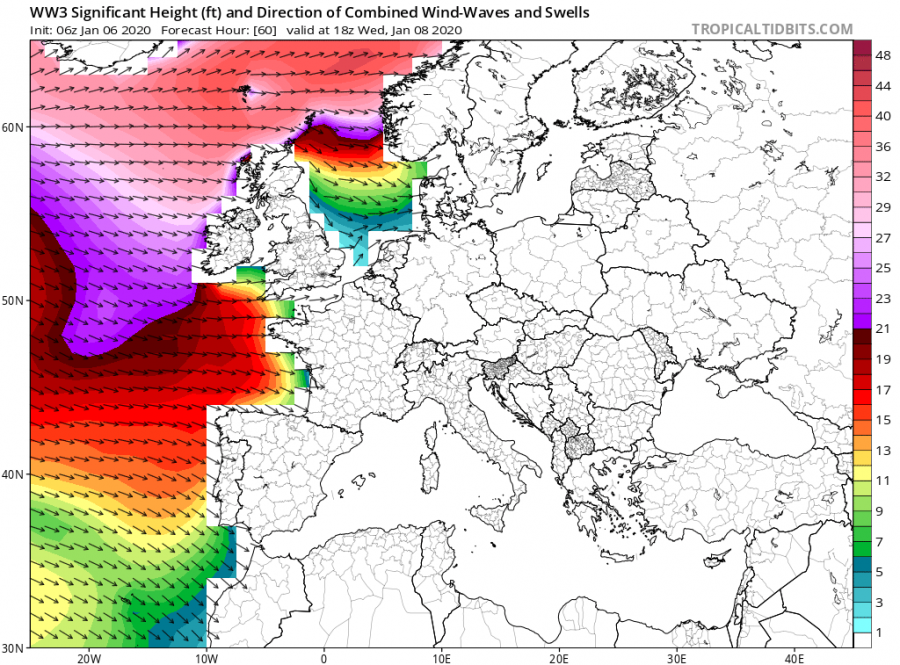 Zoomed-in map of the significant wave heights over the North Atlantic – notice the maximum heights are likely to reach more than 15-16 meters, moving towards the Faroe Islands through Tuesday’s evening into Wednesday morning. Although the area is used to extremely severe winds and major waves, this system will be EXTREME and could cause damage locally! 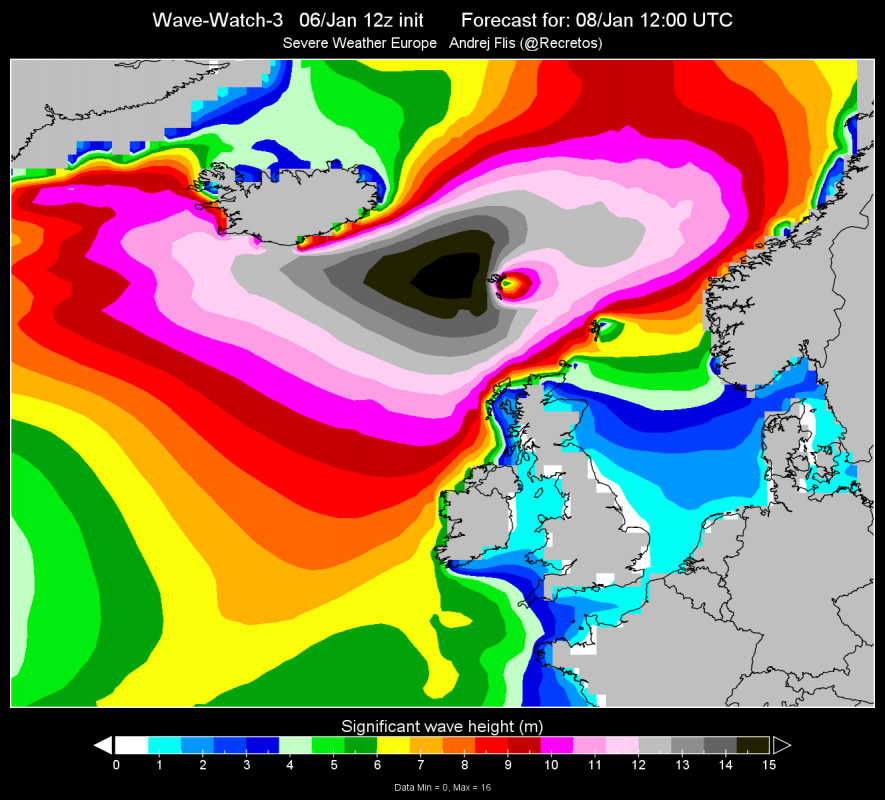 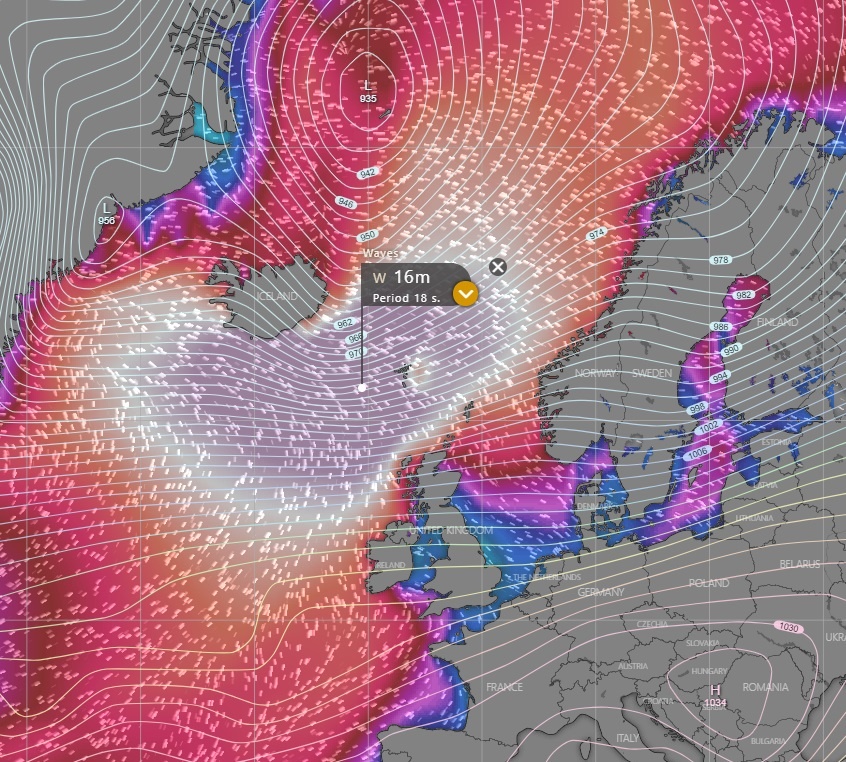