A quite impressive low-pressure system with well-defined surface fronts is moving across central Europe today, it will deliver quite a good amount of snow in some areas from northeast France, Benelux, Germany towards Czechia through the afternoon/evening hours and tonight.

A surface pressure analysis and satellite imagery reveal the developing depression over northern France this morning (Thursday, Feb 27th), with central pressure around 990 mbar. The system is deepening while drifting east towards Germany. 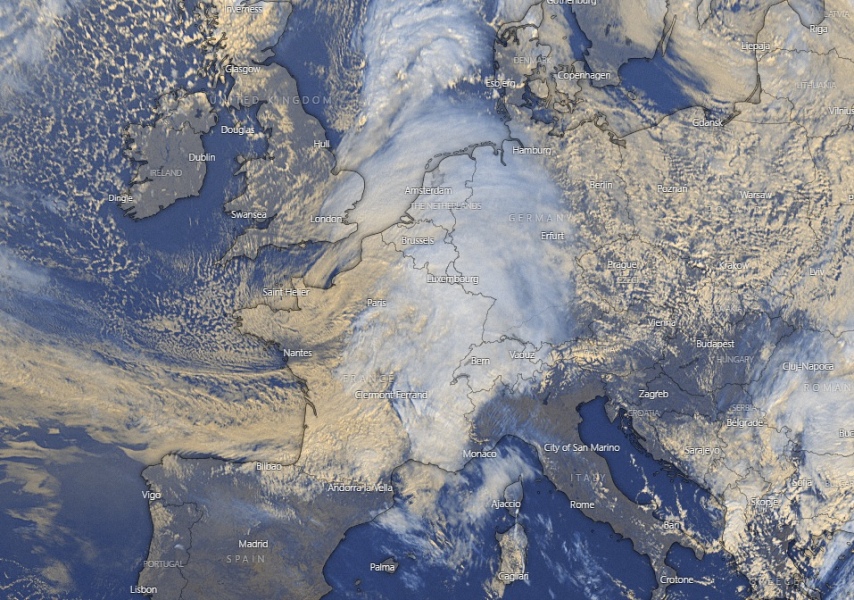 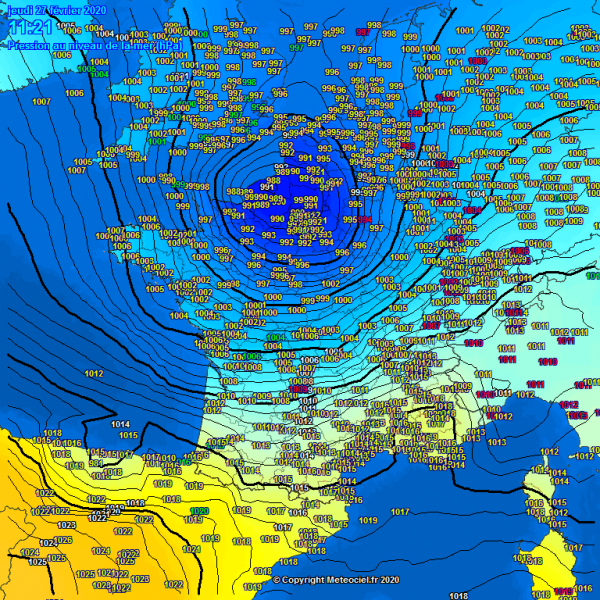 Visible satellite animation of a low-pressure system moving from the west towards central Europe today. It will deliver quite some snow along its path this afternoon – stay tuned for details. Animation: @meteociel pic.twitter.com/71EC3SMzhN

On the eastern flank of the strengthening upper-level ridge across southwestern Europe, a short-wave trough is moving from the west towards central Europe. An associated surface low-pressure system travels across northern France, Benelux, and Germany towards the east. The overall pattern is supporting colder weather with the main long-wave trough dominating Europe through mid-week, so conditions are there to support snowfall with this cyclone. 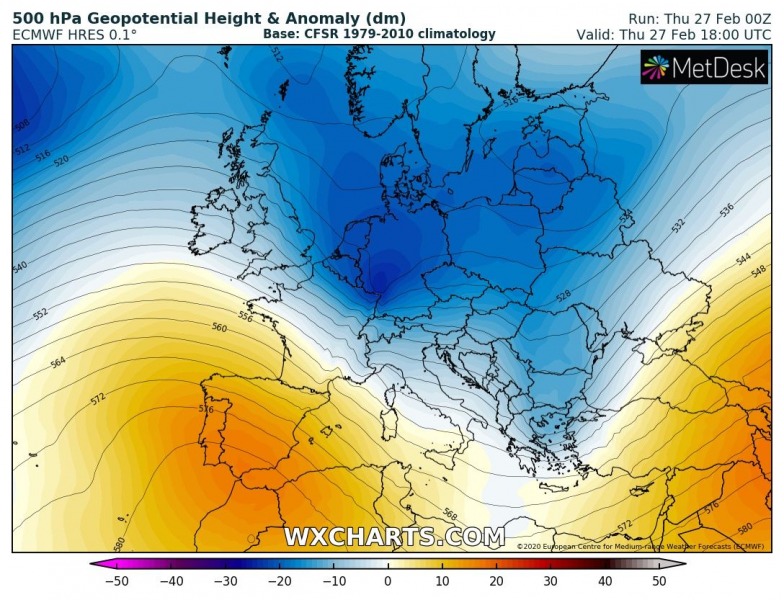 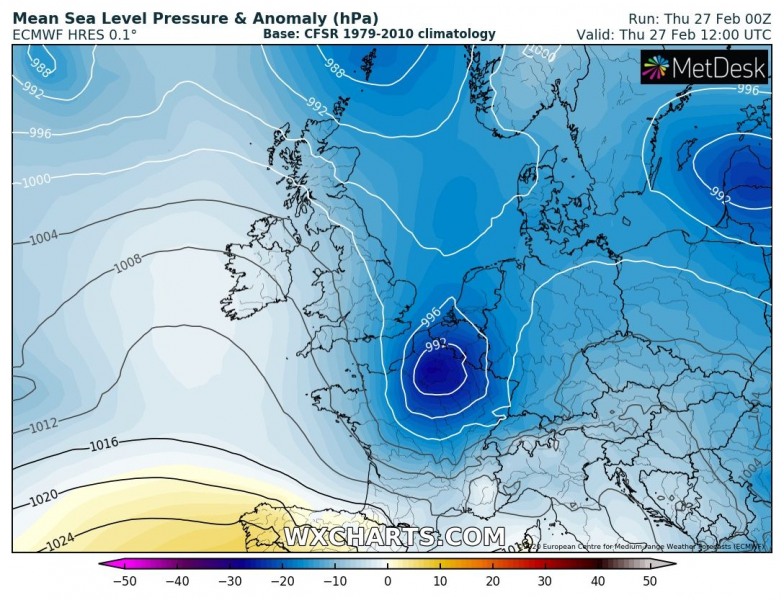 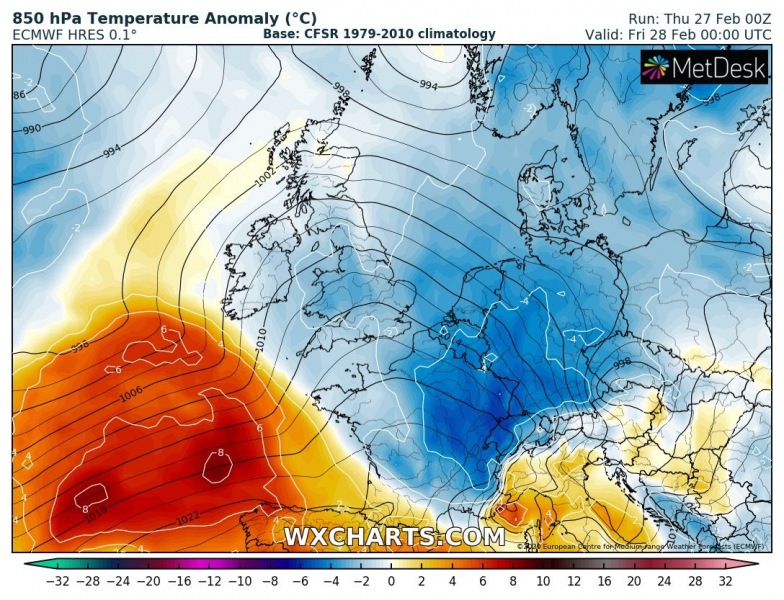 The system is already resulting in heavy wet snowfall across northeast France, Benelux, and western Germany. It will be drifting east during the day and tonight, resulting in heavy snowfall north of the warm front. With the progression of the cyclone towards east and strengthening ridge over southwest Europe, warm advection will push behind the cyclone as well, so therefore snow mixing to rain for some time is indeed possible across southern Germany. However, it should remain heavy snowing further north. The system reaches north Austria and Czechia tonight. 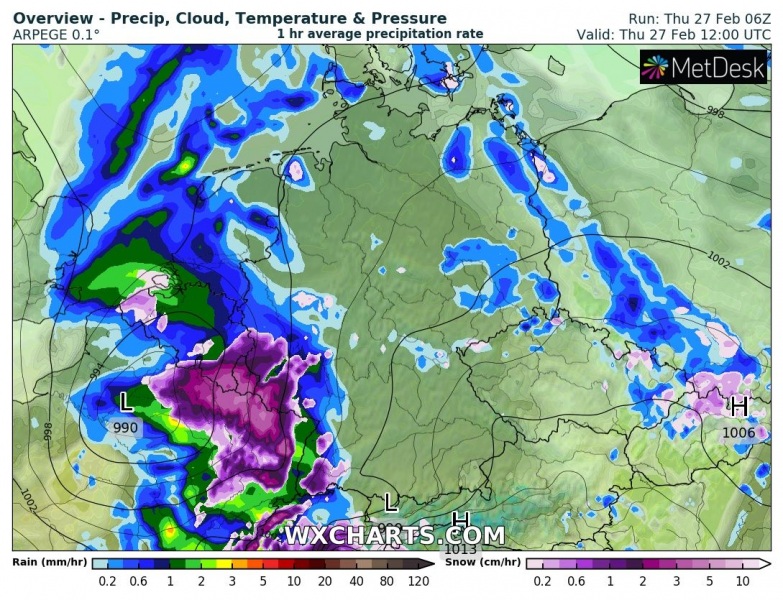 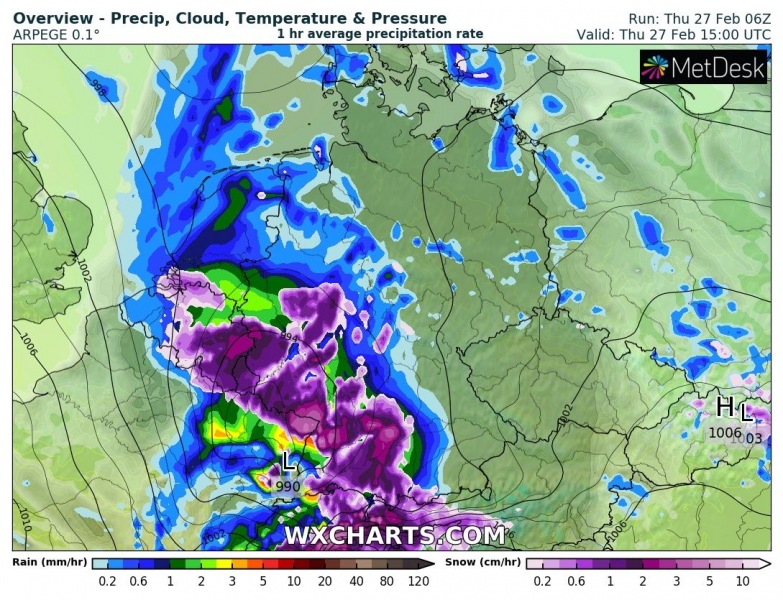 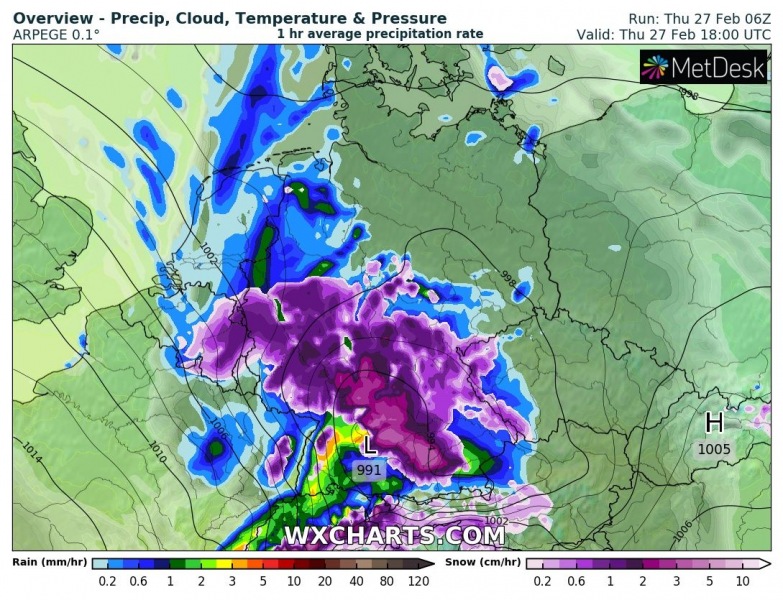 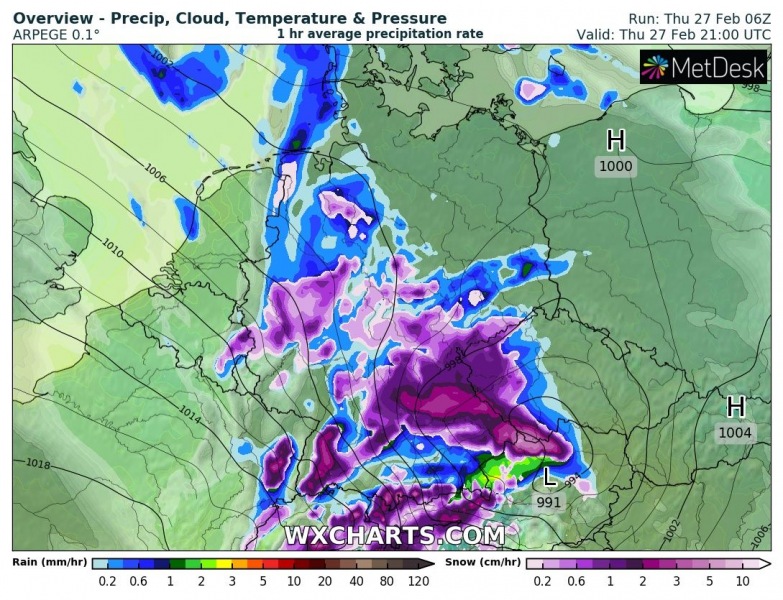 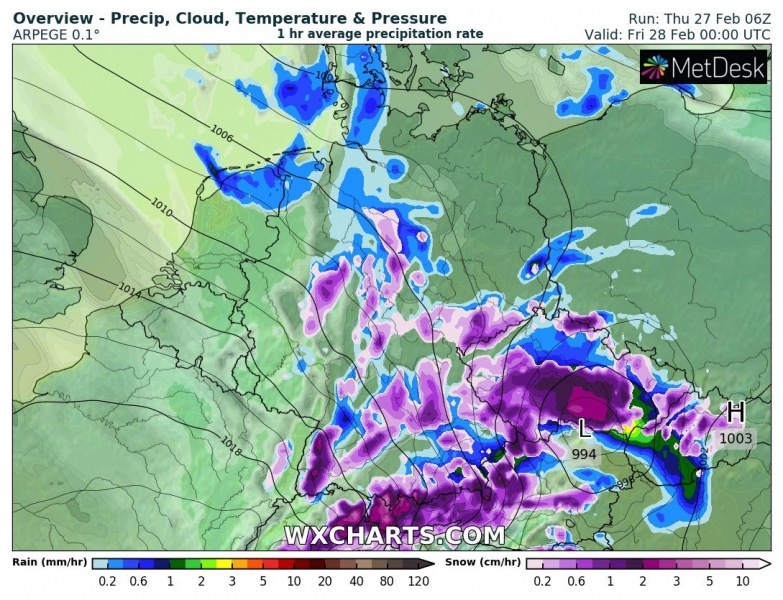 The frontal system is expected to deliver quite some snow, especially over the higher elevations. However, still favorable cold temperatures should also support heavy snowfall in the lowlands, so 10-20 cm seems quite possible in some areas – eg. eastern Benelux, central Germany, and western Czechia. Probably up to 50 cm in the northern Alps. 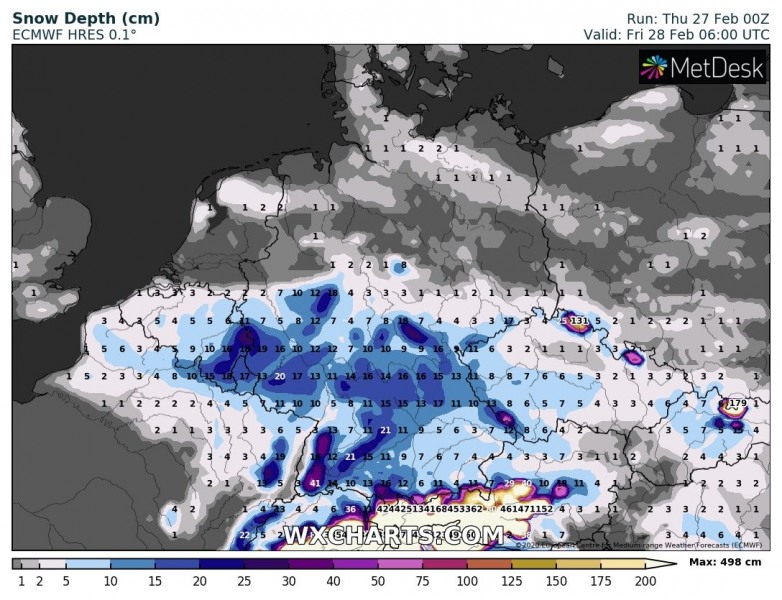 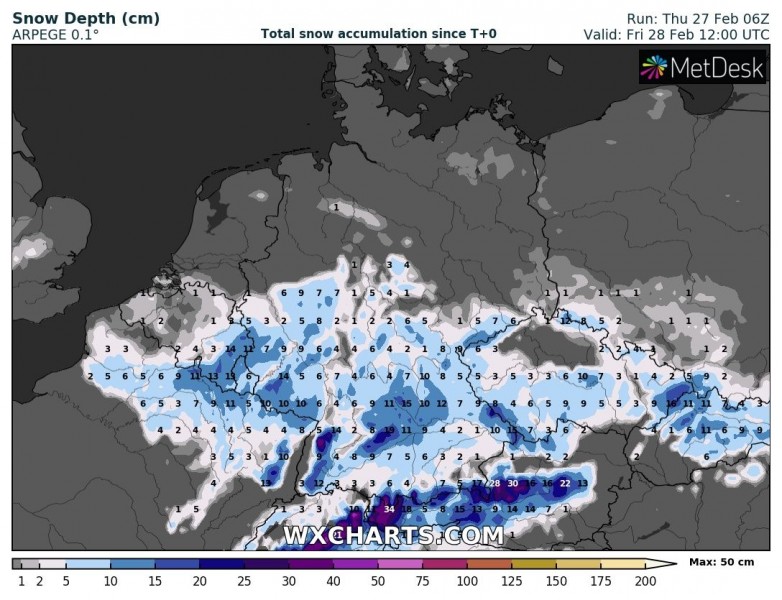 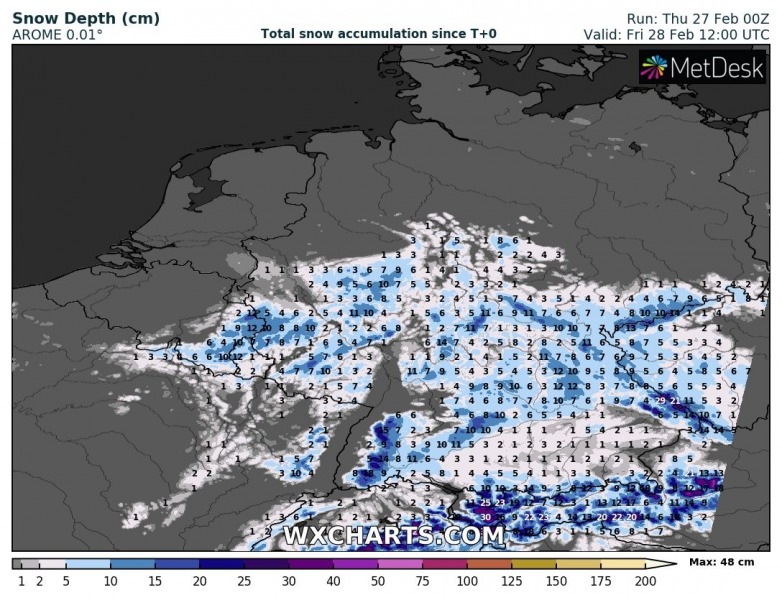 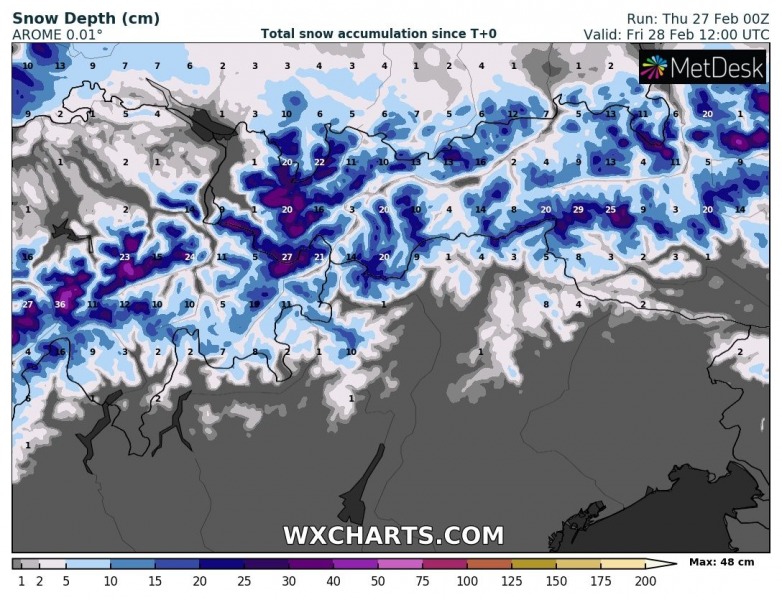 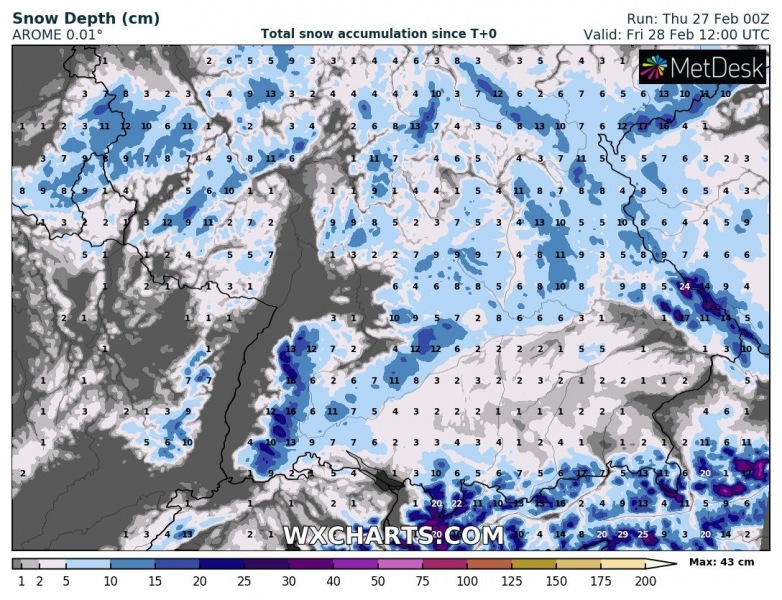 Additionally, some severe wind gusts are also possible along the moving front across eastern France and southern Germany towards northern Austria. PEak gusts should reach 90-120 km/h! 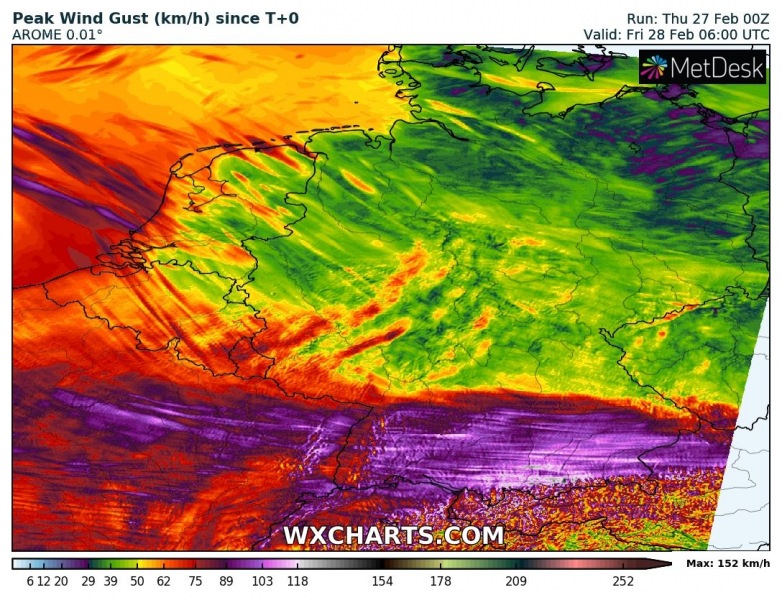 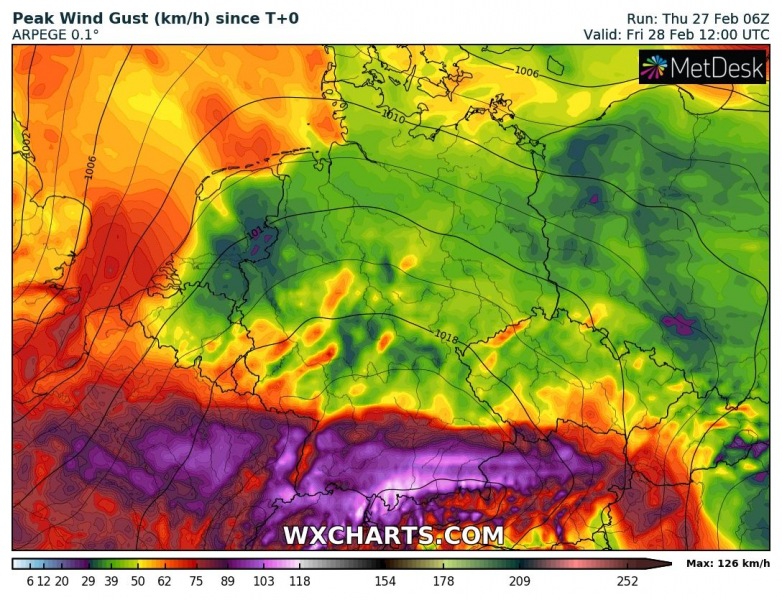