A very dangerous weather pattern is establishing across the North Atlantic into the coming weekend. A couple of deep lows develop a strong and persistent southeast flow towards east-southeast Iceland and lead to an extreme amount of rain. Nearly 500 mm over the next 5 days could lead to damaging flooding. In addition, extreme snow will develop further inland over the glaciers, with 4-5 meters of fresh snow possible by Monday evening.

If we remember an extreme rain and snow event over the Alpine region in central Europe last weekend, it seems that southeast Iceland is now in the game for some impressive high amounts of rain and snow in the coming days.

Persistent moisture advection will push tremendous amounts of rain towards Iceland and could lead to damaging flooding along with the coastal areas in the southeast parts of the country.

Around 500 mm of rain could accumulate by Monday. As well as nearly 4-5 meters of snow possible over the Vatnajokull and the Mýrdalsjökull ice caps.

The attached water vapor satellite below indicates that a large North Atlantic depression has developed, with already an obvious channel of moist air mass advecting towards Iceland with southeast winds. The flow is coming from western Europe and the North Sea across the Faroe Islands into southeast Iceland. 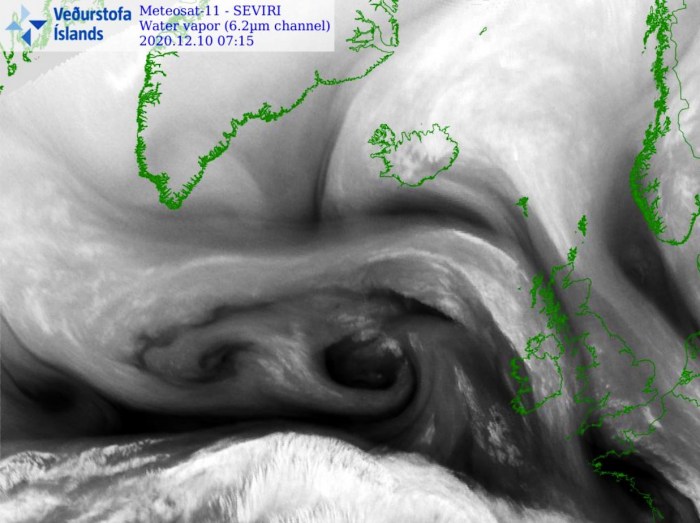 The pattern establishes a persistent and favorable southeast flow for heavy rains from Thursday onward and will be lasting until late Monday, with just occasional breaks of less intense rain (and snow further inland) in this period.

Here is a video animation overview of the pattern evolution:

The established North Atlantic depression on Thursday will gradually deepen and intensify through Friday, being trapped between the upper-level ridge over the Azores and another one over the Arctic region and northern Russia. 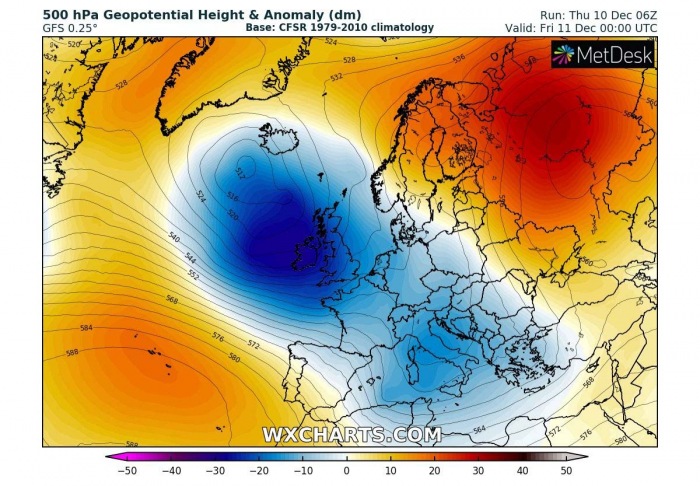 This pattern will persist over the weekend when another, very deep trough develops over the Atlantic and maintains a strong southeasterly flow towards Iceland. The blocking high over the Arctics will limit the northern progress of the trough, so it will be literally trapped over the same area for most of the time. 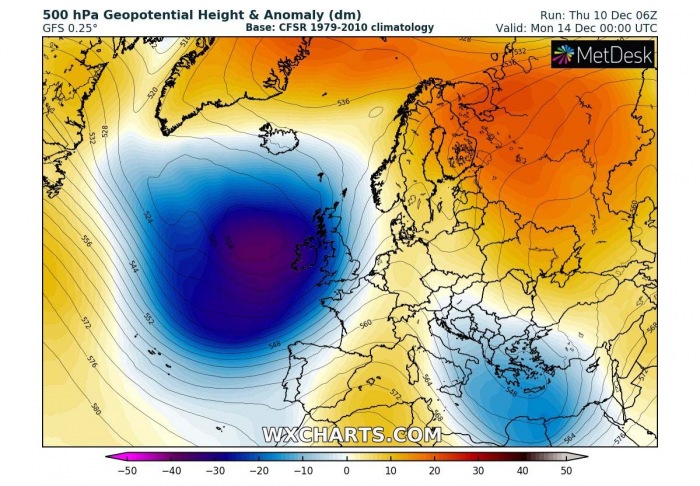 This weekend/early next week pattern will also develop a massive windstorm over the Atlantic and major waves towards Ireland and the UK – we will have a special update for this pattern on Friday, so stay tuned!

The result of a deepening North Atlantic depression towards Friday also responds with a quite deep surface low, centered roughly between Iceland and the UK. This means that a very strong southeasterly flow will establish on its eastern flank, as the pressure gradient will be strong. Huge moisture advection will push into southeast Iceland. 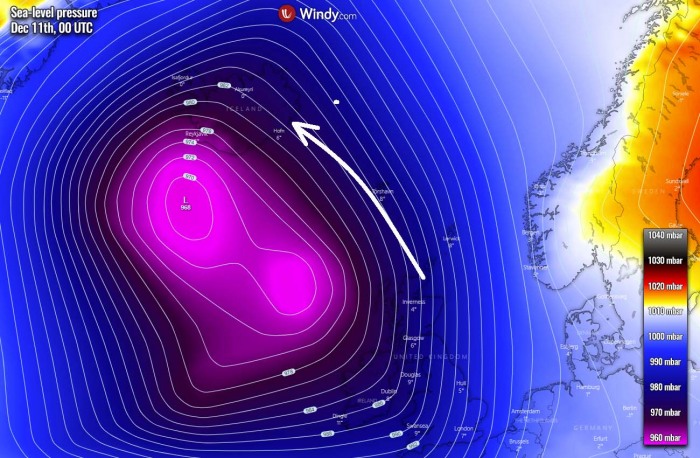 Southeasterly winds will maintain strong orographic rainfall across southeast Iceland, and indeed very heavy snow further inland over the glaciers and highlands. This is a classic example of an orographic precipitation event. 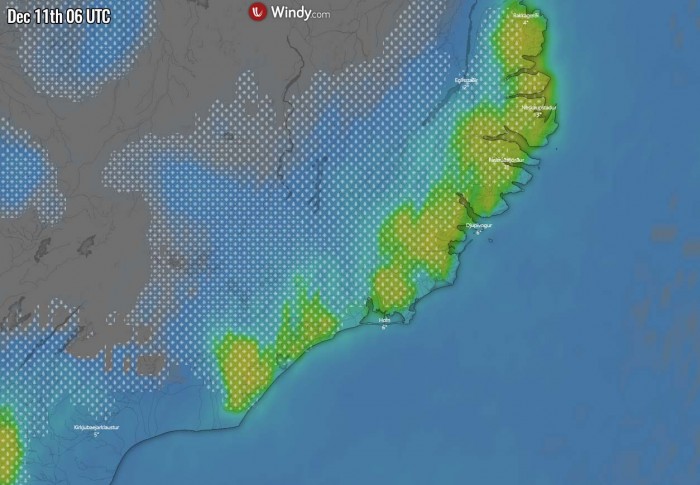 While the low gradually weakens by Saturday and moves further south over the Atlantic, the southeast flow remains in place from the North Sea towards Iceland. This should allow a continuing moisture advection into the southeast parts of the country. 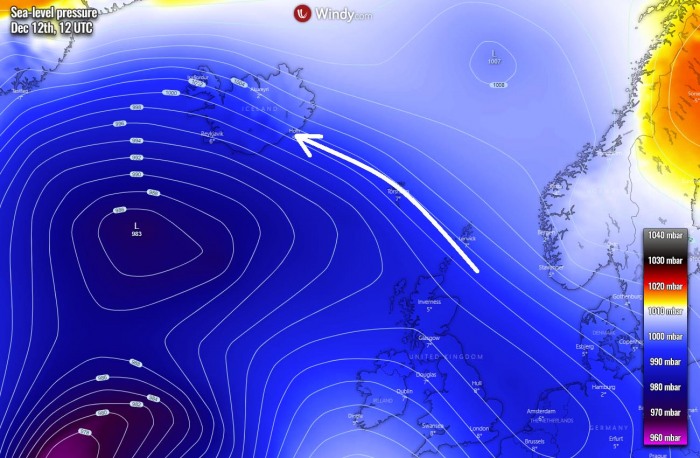 Despite the low weakening and moving away from the island, a very intense rainfall develops across southeast Iceland on Saturday morning. Extreme snowfall will be ongoing over the Highlands. The amounts of rain could already introduce flooding issues locally. 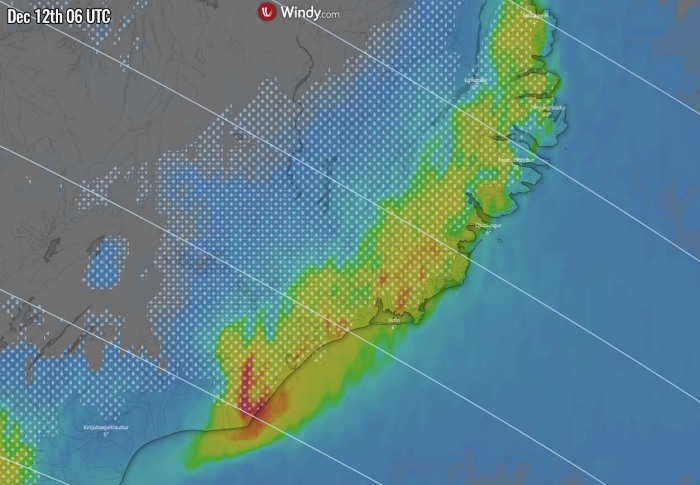 The weather will somehow improve on Sunday but will soon worsen again as Monday approaches. A very deep and powerful new North Atlantic depression will significantly strengthen the southeast flow towards Iceland again, resulting in very heavy rain and snow in the southeast parts of the country. 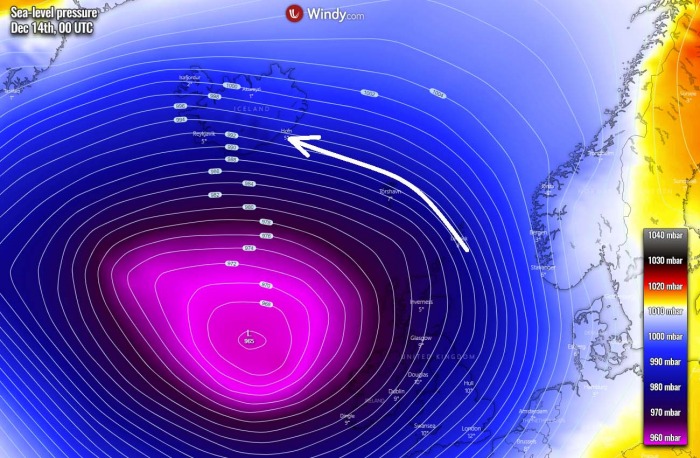 With orographic precipitation event, the exact area where the strongest rain/snow is expected strongly depends on the position of the lows and high, therefore the angle of low-level moist flow varies.

It looks like that on Monday, the flow will be slightly more east-southerly, which means the eastern portions of Iceland could take the biggest rains. 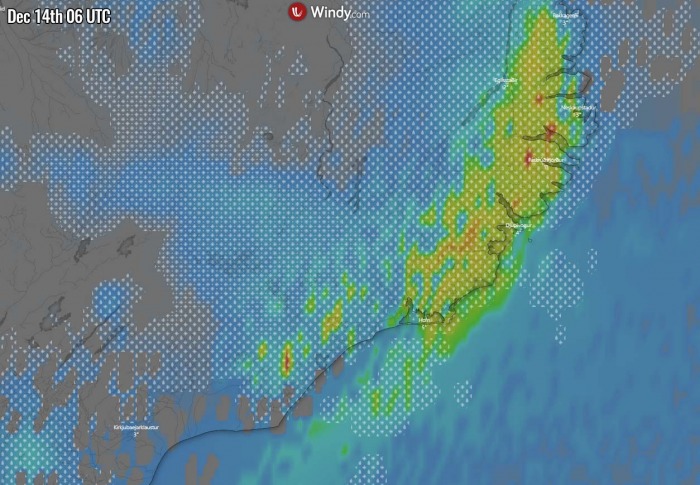 Nevertheless, it will be yet another day with an extreme amount of rain for the lowlands, seriously worsening flooding conditions in places. Temperatures will be a bit lower than in the previous days, so some snow might also mix with the rain.

EXTREME AMOUNT OF RAIN AND SNOW

According to the high-resolution weather models, the rainfall amounts will be extreme. Some of the models (e.g. ICON-EU) are hinting at an impressive 500+ mm of total rainfall over the next 5 days, so from Thursday through Monday evening. These could bring dangerous flooding in the southeast region. 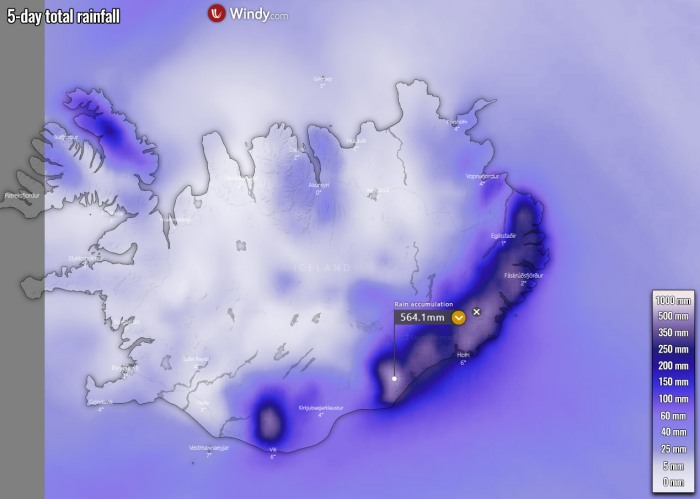 Further inland, where extremely heavy snow will be ongoing into the Vatnajokull ice cap, huge amounts of snow are expected. Several meters of new snow should accumulate by Monday.

We can also see a lot of snow to the north of Vik, over the Mýrdalsjökull ice cap, as the southeasterly flow will also push moisture there. 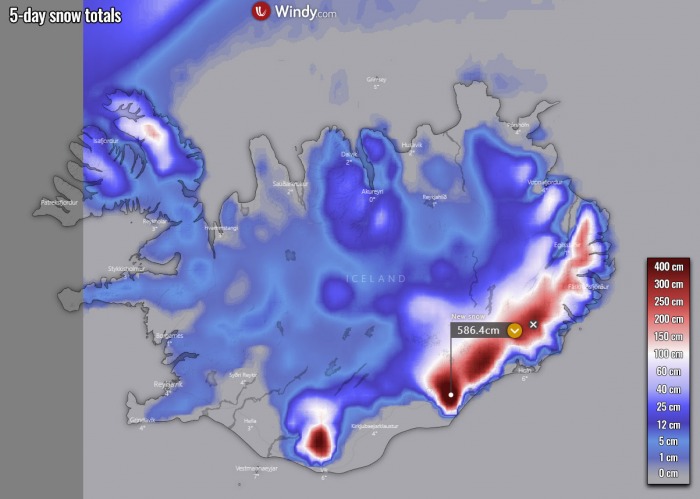 Here is a close-up view of the snow amounts across southeast Iceland. A really impressive fresh snow accumulation over just a few days period! 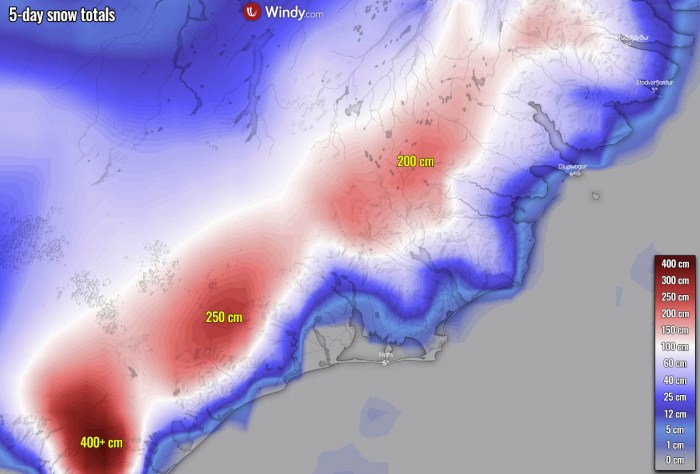