The current pattern reveals a strenghtening ridge across the western Europe, while a large upper low / pool of low geopotential heights is placed across the southeastern Europe. Unsettled conditions with widespread convective activity will be on going there today, where quite unstable but weakly sheared environment is present – expect flash floods threat locally. Looking closely at north Europe, a short wave with a frontal wave is crossing Norway. It will result in scattered convective storms later today, especially across Sweden. 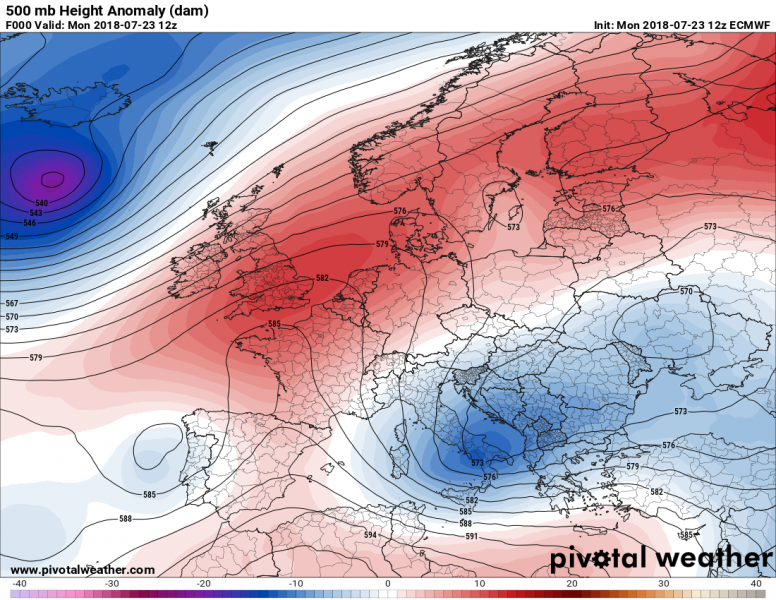 Here is the wind shear and CAPE map for northern Europe for today. Moderate instability should build up within mid-10s dewpoints airmass ahead of an approaching frontal boundary, overlapping with moderate to strong wind shear. This suggests organized storms are likely, including supercells and storm clusters given the shear vectors almost parallel to the surface front. Bowing segments with straight line winds, torrential rainfall and locally large hail are possible. Given the enhanced S-SE surface winds, good low-level wind shear and helicity should enhance threat for tornadic storms as well. Storms merged into larger clusters / systems will continue into the evening hours while spreading across Sweden towards northern Finland and Norway (Lapland). 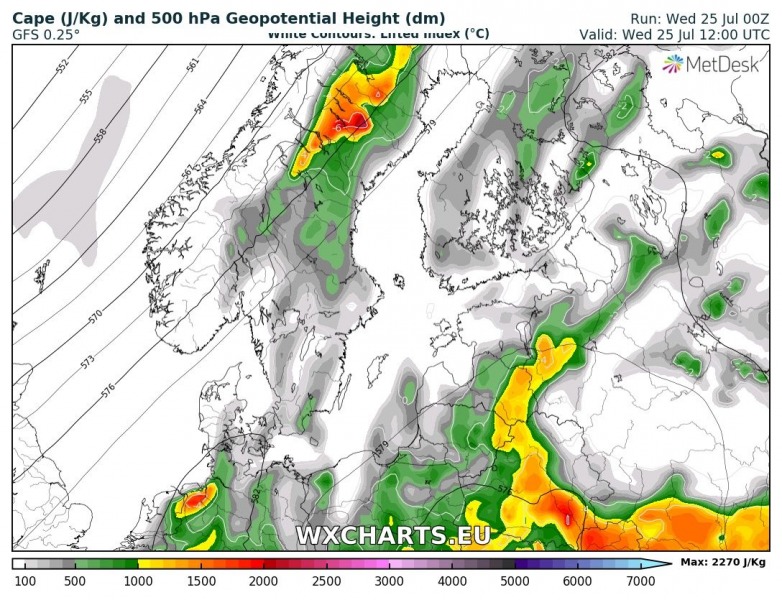 A rainfall accumulation map by Sunday suggest quite a lot of precipitation can be expected across central Europe and the Balkans, locally excessive amounts are possible as rather slow moving convective storms are expected on each day within the large weakening upper low. The main threat will be local flash floods and hailstorms. 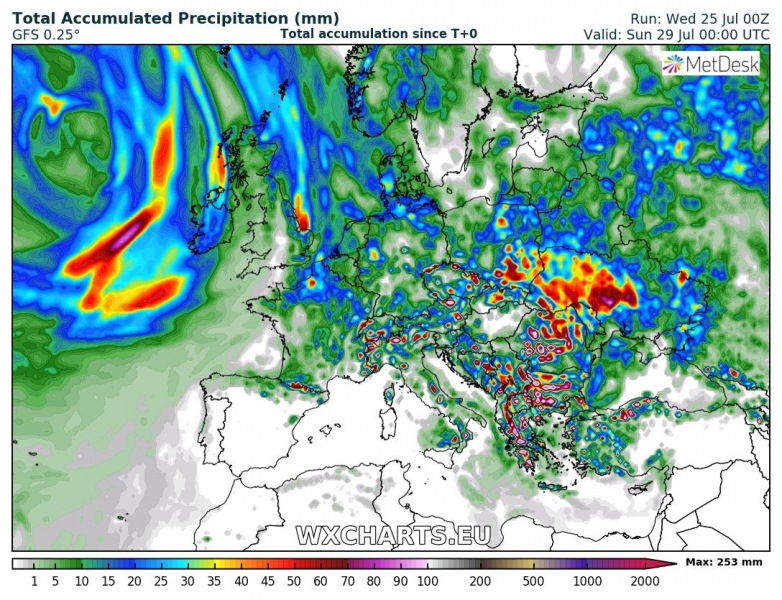 The refreshing cool airmass behind the cold front in Norway and Sweden will be temporary, as a developing powerful ridge returns towards the weekend. Models are suggesting a significant blocking pattern will develop across N Europe, resulting in strong warming into Fennoscandia after Friday. Again, afternoon temperatures will be pushed above the 30 °C threshold. 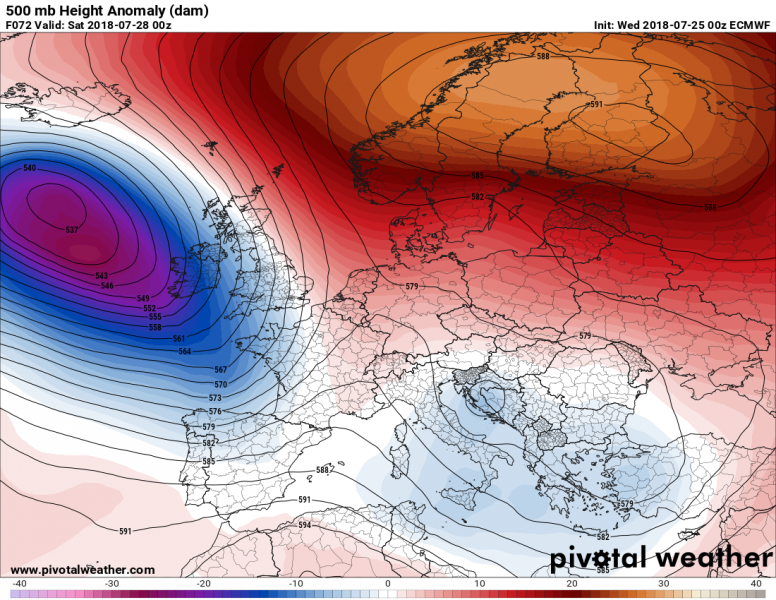 A deep trough over the E Atlantic will push a plume of very warm and moist airmass across France and UK on Friday. Organized convective storms are expected in the afternoon and evening hours, as a good overlap of moderate instability and shear exists. Multicell and supercell storms are possible, merging into large cluster in the evening hours while spreading north. Expect large hail, torrential rainfall and severe winds threat. 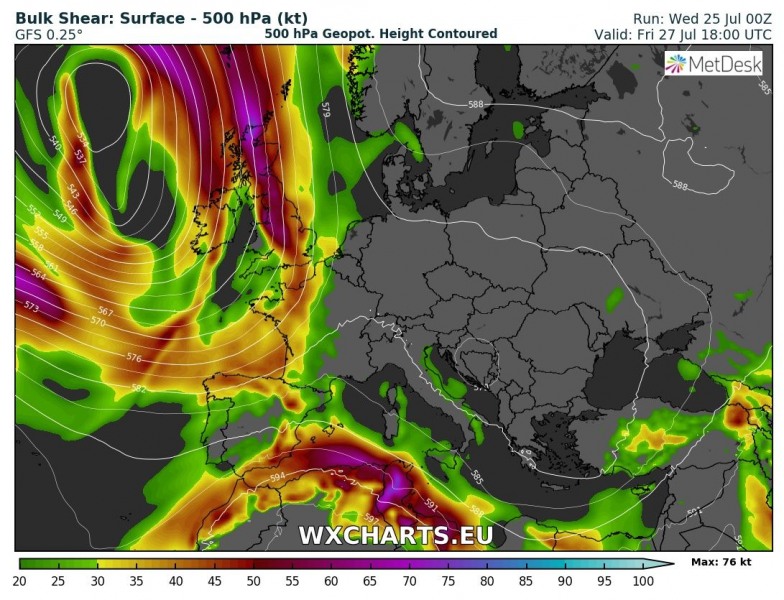 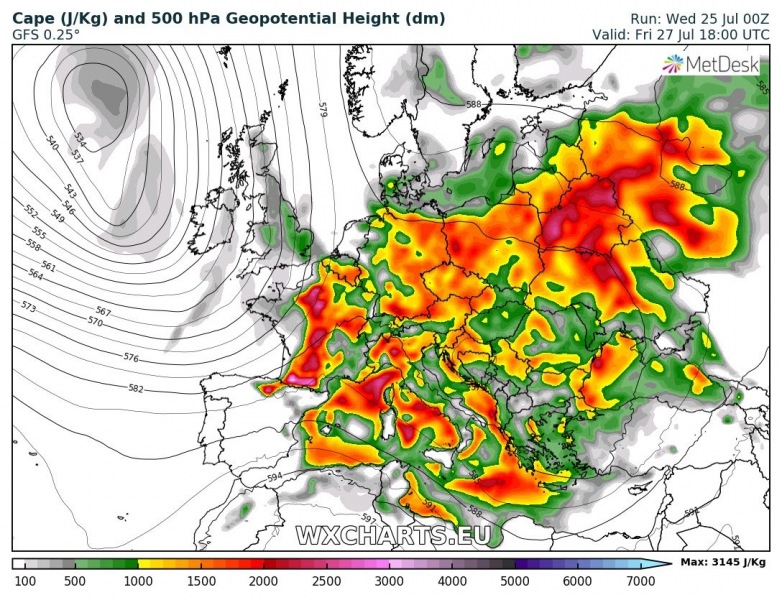 An interesting setup develops across Norway on Friday, as strong southerlies advect very warm airmass across southern Scandinavia towards the Norwegian sea. Likely resulting are strong Foehn effect (dry downslope) winds through the west Norwegian fjords into the coastal areas. With very warm airmass in the mid-levels, this suggests very high afternoon temperatures (and even nighttime temperatures) might develop as winds will not allow the boundary layer to cool down significantly overnight to Friday and also into Saturday. Temperatures well above 30 °C along the fjords cannot be excluded! 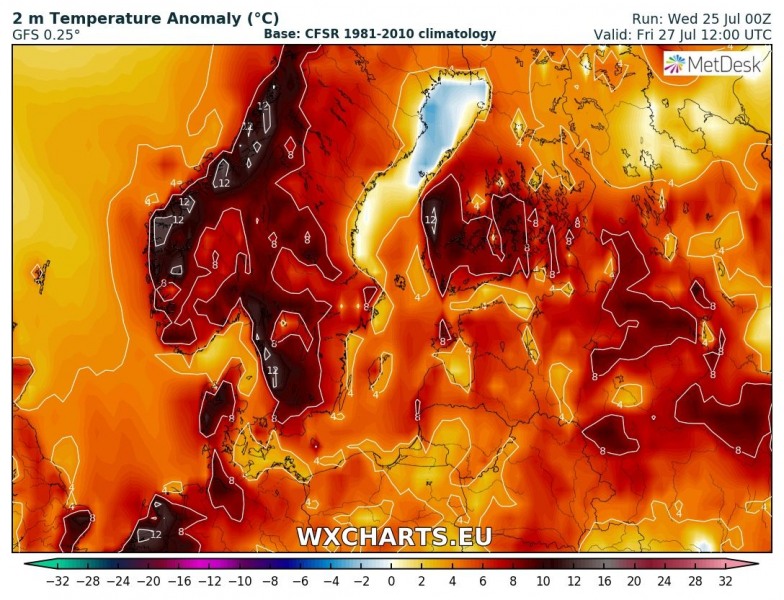 The pattern early next week (the beginning of August) suggests an extensive ridge across N Europe will dominate our continent, so a heat wave will take place across much of Europe. However, low geopotentials across S Mediterranean will leave temperatures into normal values there – however, southern Europe will still be in the mid 30s on all days. 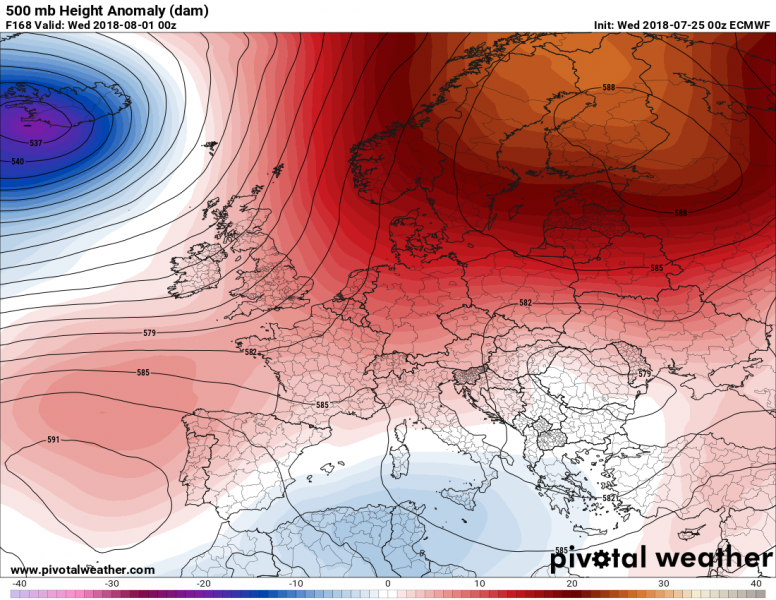 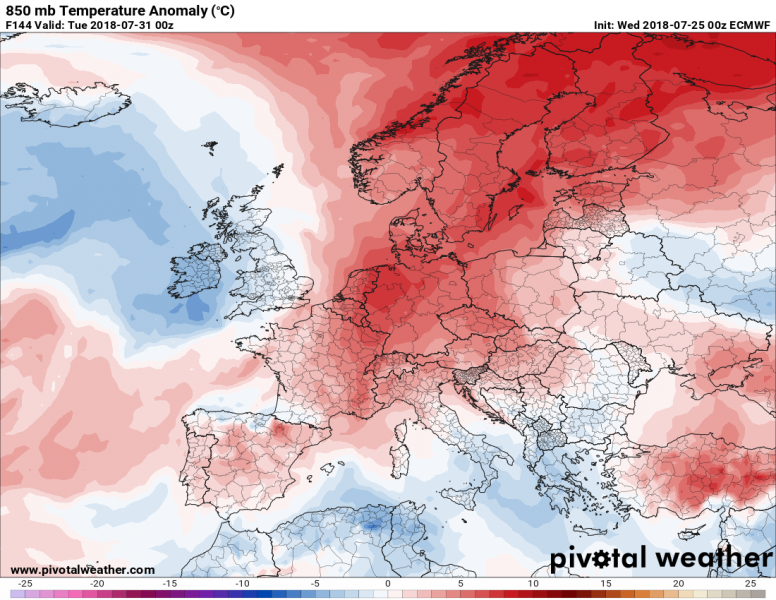 Looking well ahead into early August, models are hinting at the development of a significant heat wave into west-central Europe, where temperatures would be around 10 °C above normal, which means peak afternoon temps xould approach +40 °C in some places. The highest anomalies above normal values will be across north and central Europe.