An exceptionally large dust event is coming for western Europe and the western Mediterranean this weekend. France, parts of Spain and Portugal, particularly the Balearic Islands, Corsica, Sardinia, Sicily, large parts of the Apennine peninsula, Malta as well as parts of BeNeLux and the western Mediterranean will have skies full of Saharan dust. Also parts of Algeria, Tunisia and Libya where dust storm conditions are expected locally! 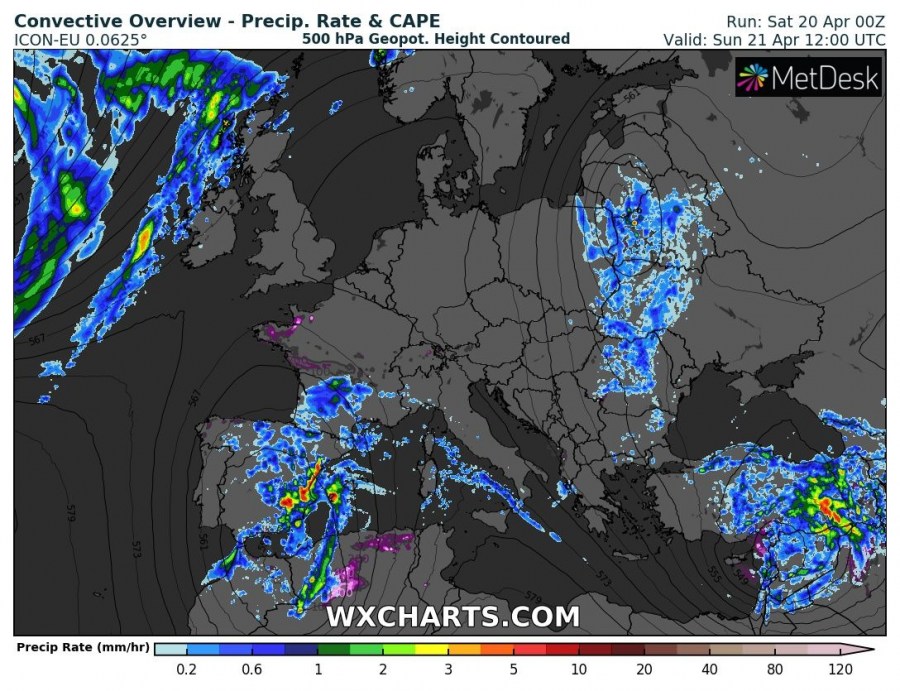 A broad cold core upper low is pushing from N Morocco into the Iberian peninsula and the western Mediterranean. It will persist there until Tuesday, when a deep long wave trough coming in from the Atlantic pushes it further east into the northern Mediterranean. The cutoff low will produce an extended torrential rainfall event for parts of the western Mediterranean. Additionally, persistent southerlies will advect exceptionally large amounts of Saharan dust from Algeria into western and central Mediterranean, pushing into Spain France, Italy, Spain, Malta, Switzerland and to a lesser extent BeNeLux and Germany by late on Sunday and as far as the UK by Tuesday! By far the highest dust loads will be present over the western Mediterranean, falling off further north. This is a truly rare event!

Expect very dusty skies over the Balearic Islands, northern Spain, parts of Portugal and Sardinia early on Saturday, with the dust pushing into southern France and as far east as western Greece by mid Sunday. A cloud of dust will also push west over the Canary Islands as far west as the Azores. Model guidance indicates an exceptionally dense dust cloud over the western Mediterranean early on Monday, with dense dust pushing as far north as southern England.

The dust event will continue well into next week, we will be providing further updates. Be alert for dusty skies, we welcome your reports! 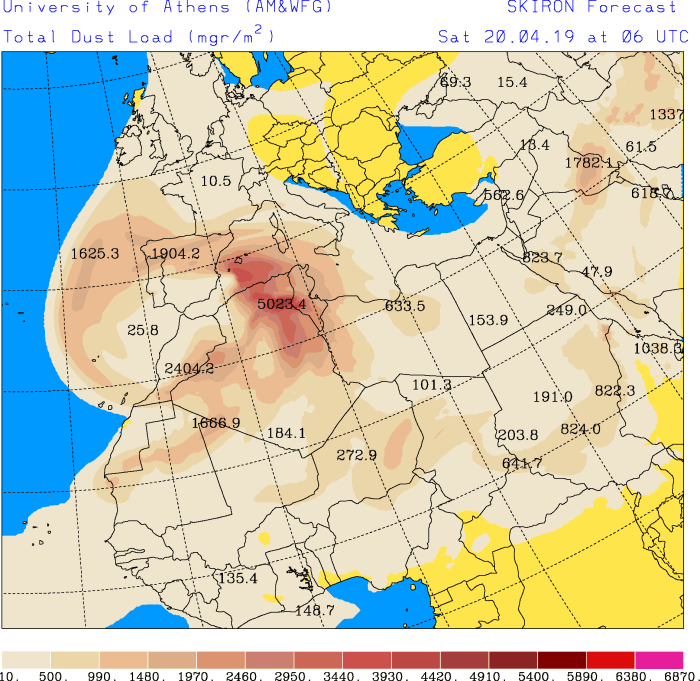 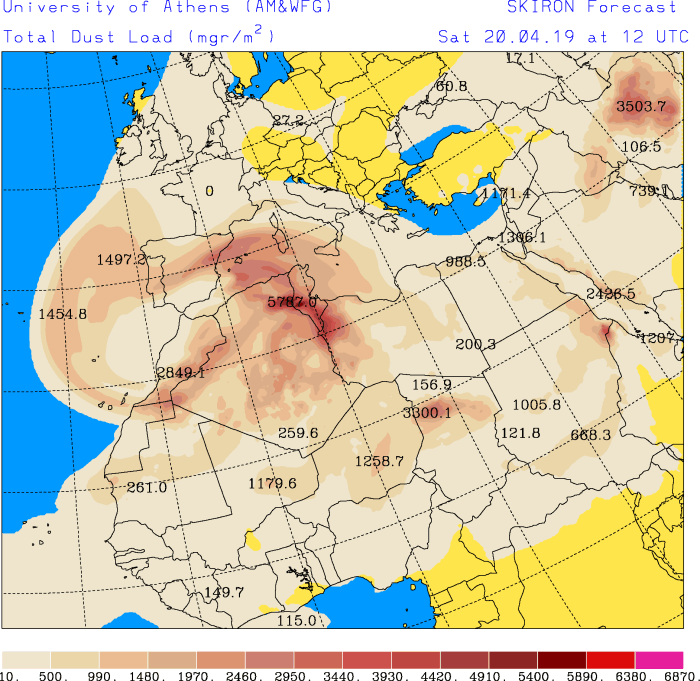 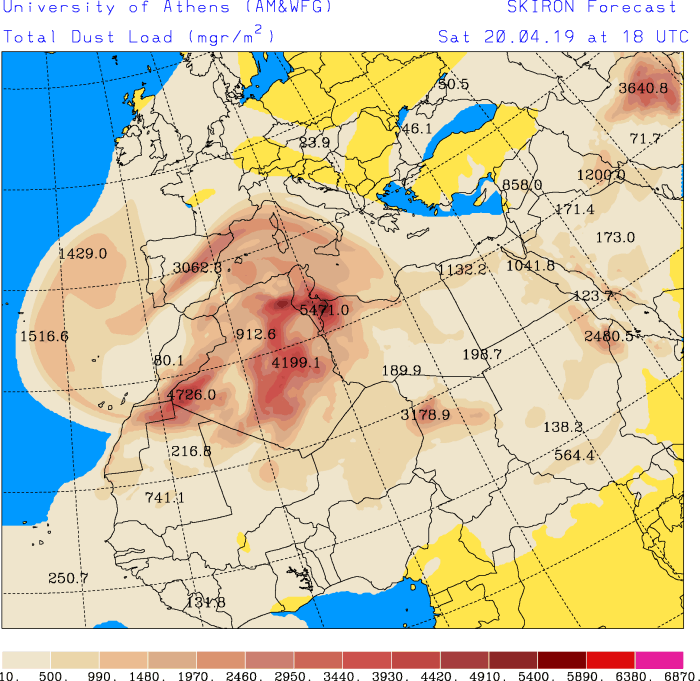 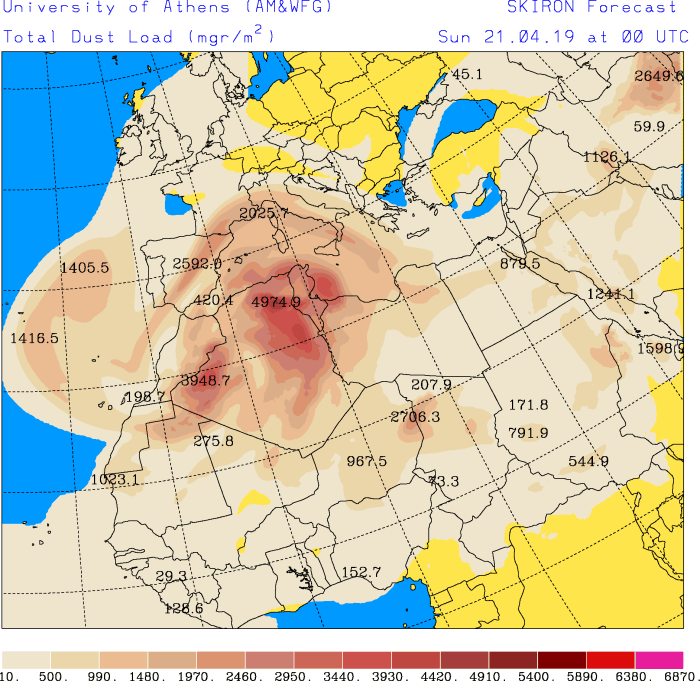 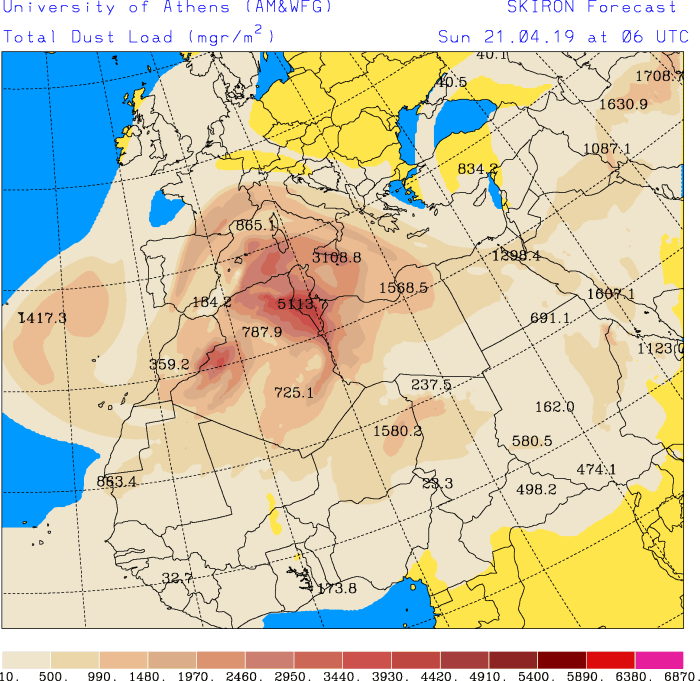 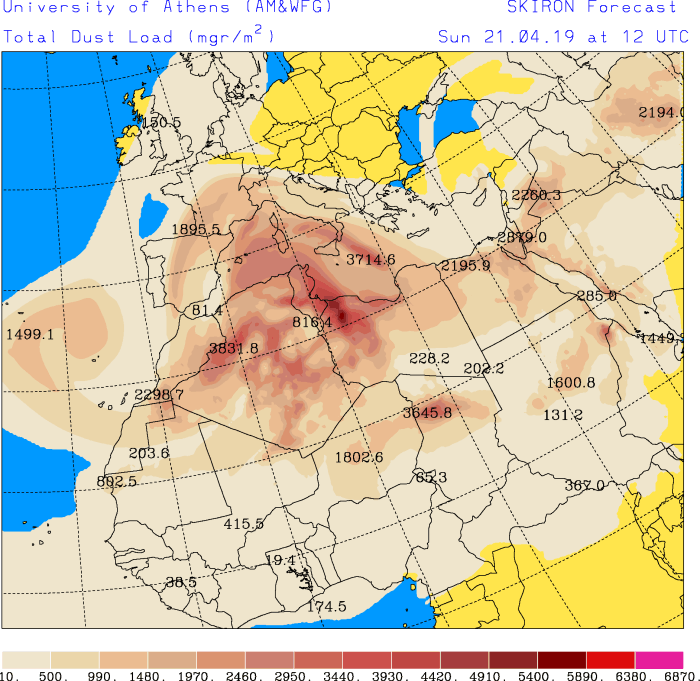 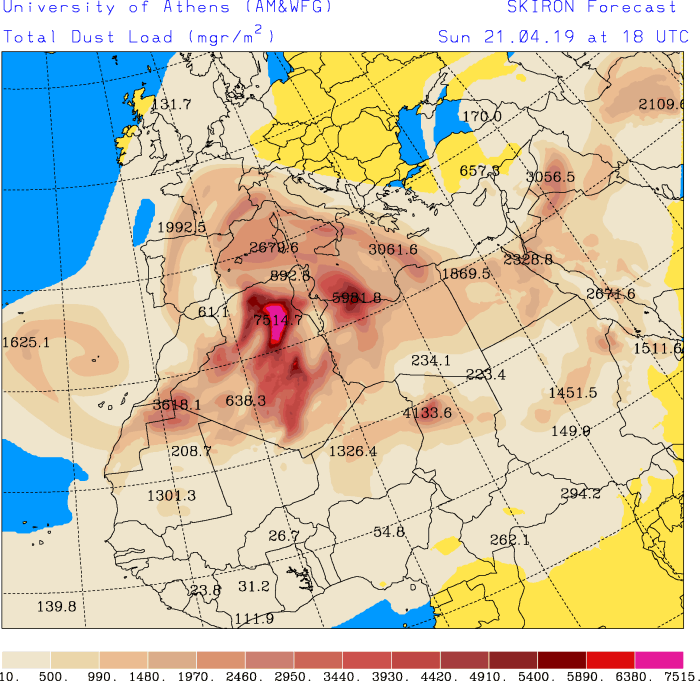 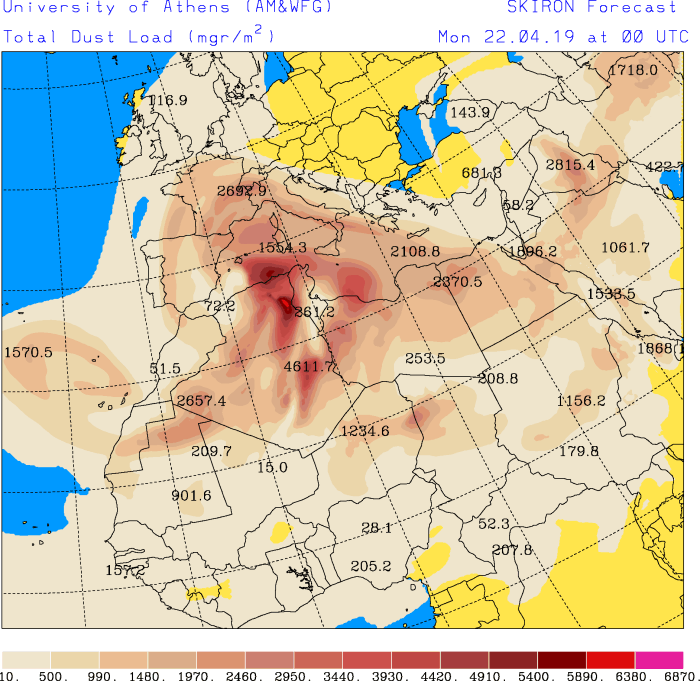 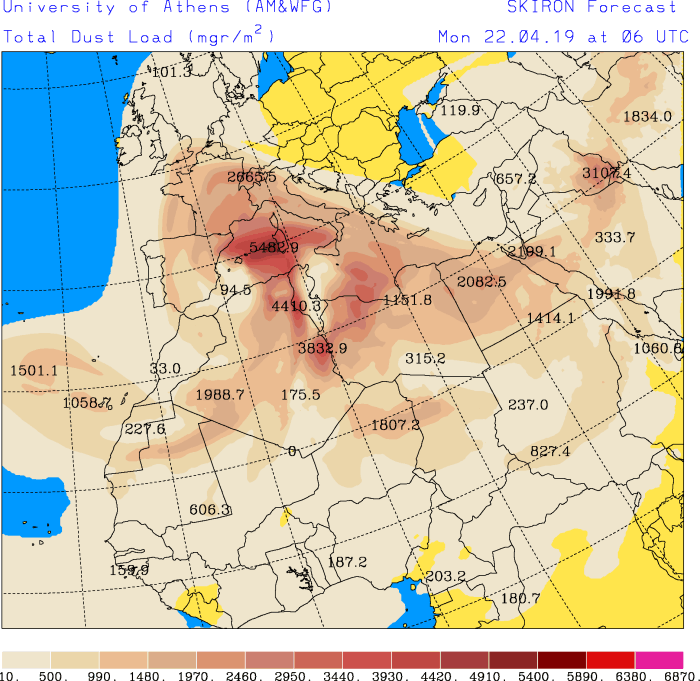 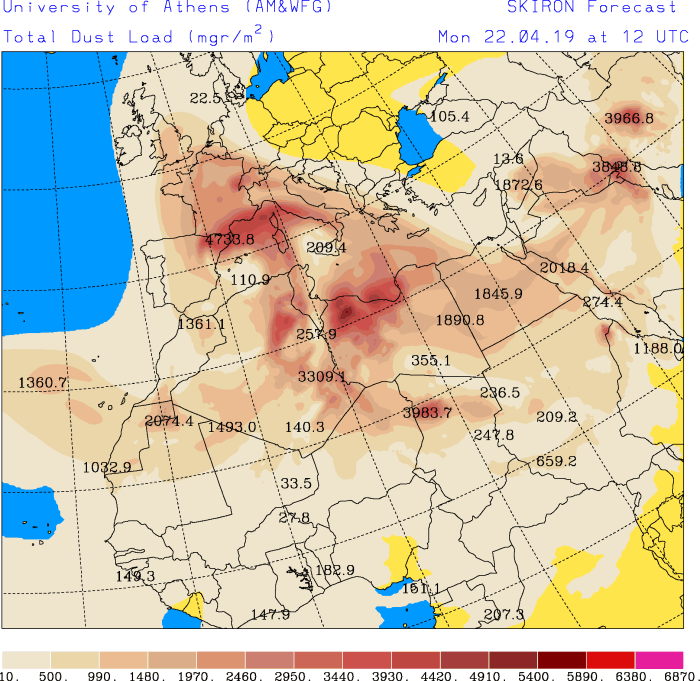 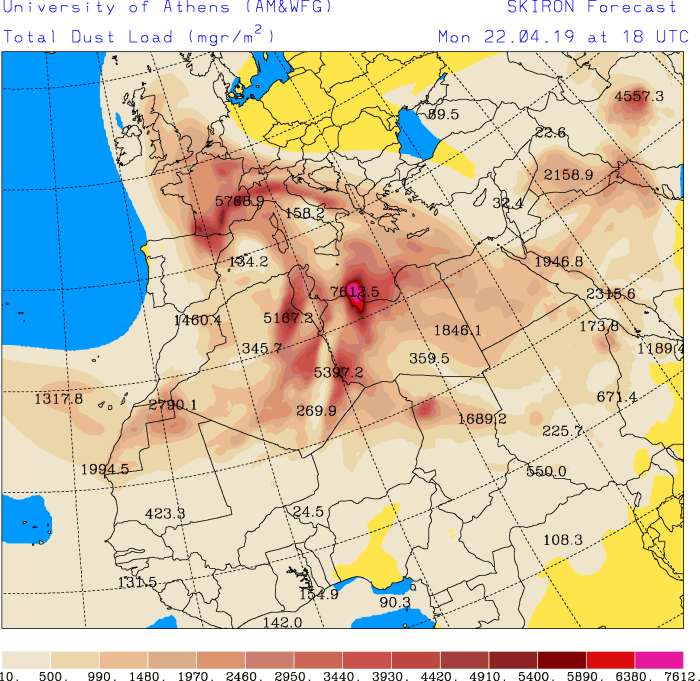 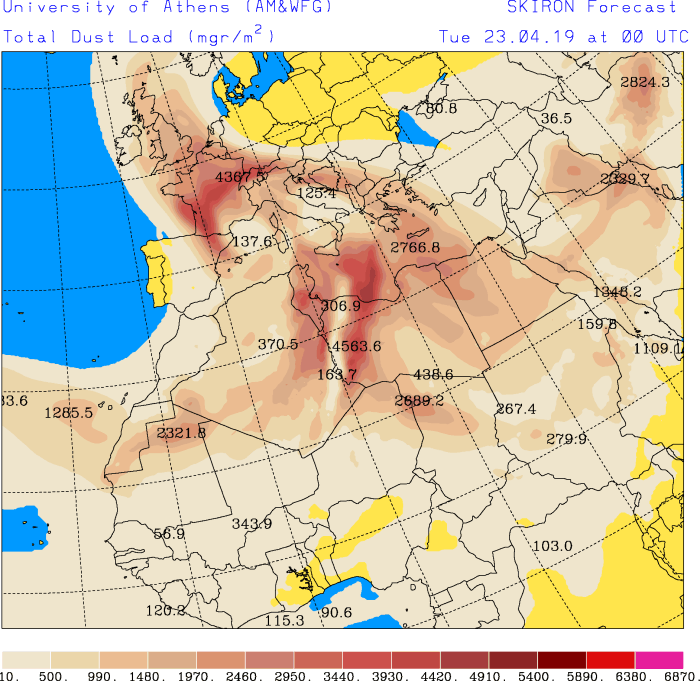 Dust load over the Mediterranean region in 6-hour intervals over the next 2 days. Areas with darker and more intense colors indicate areas of larger dust loads in the air. Maps: University of Athens – SKIRON model.

Stay tuned for updates on this event!