The exceptionally dynamic pattern over the central Mediterranean will be supportive for severe thunderstorms on Monday, including tornadic supercells. The rather vigorous cyclic cyclogenesis beneath the deep trough / cutoff low over the western Mediterranean is producing an environment that is very conductive for the formation of severe thunderstorms. A strong mid-level jetstreak overspreads the region, while the unusually deep surface lows over the W-CNTRL Mediterranean, combined with the ridge over SE Europe produce a strong pressure gradient and an exceptionally strong low level wind field. An extremely dynamic, strongly sheared and helical environment is in place, which combines with moderate to strong instability. The environment supports severe thunderstorms along frontal boundaries, surface convergence zones and zones of upslope flow / orographic forcing. Strong low level winds and strongly veering vertical wind profiles favour formation of tornadic supercells. 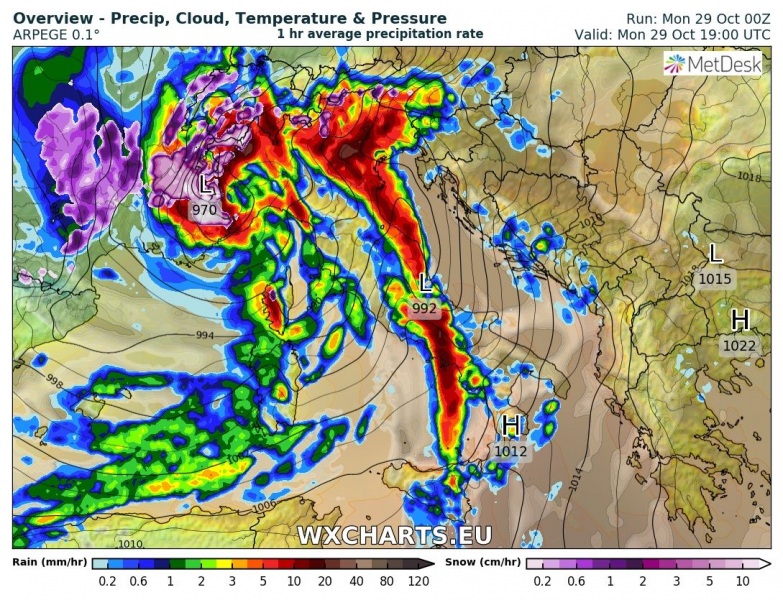 Synoptic situation over the central and northern Mediterranean on Monday early evening. A very deep surface low (970 mbar) is situated over NW Italy, with the frontal boundary and a strong squall line pushing across the Tyrrhenian sea and central Apennines into the plains of north Italy and northern Adriatic sea. ARPEGE model guidance. Map: Wxcharts.eu.

The main areas of activity will be the western coast of Italy, from Liguria to Sicily, the plains of north and northeastern Italy and the northern and central Adriatic region. The environment will be supportive for prefrontal storms as well as intense mesoscale convective systems along frontal boundaries. The main threats with these thunderstorms will be torrential rainfall, however, the strongly sheared environment will very significantly enhance the threat for tornadoes as well.

A very impressive environment is in place across the Ligurian and the Tyrrhenian sea for severe thunderstorms. Moderate to strong instability is available, with MLCAPE up to 1500-3000 J/kg (!!). A strong 40-55 kt mid-level (500 mbar) southerly jetstreak overspreads the region, with sharp frontal boundary expected to pass across the region from late morning into the afternoon. A persistent, fairly stationary surface convergence zone has been persisting in the area since the early morning, the result of successive surface lows advecting northwards (west of Corsica and Sardinia) and maintaining strong southeasterly surface flow, with up to 80-100 km/h sustained Scirocco winds. Impressive low-level dynamics with up to 30 kt 0-1km shear and 200-350 m2/s2 SREH1. Indeed, as of writing this forecast (mid-morning), tornadic supercells have already been reported in Liguria. The convergence zone is expected to persist until the afternoon.

A new, sharp frontal boundary will develop in the afternoon across the Tyrrhenian sea. Strong, up to 90-100 km/h sustained Scirroco winds advect warm, moist air ahead of the front. Impressive low-level (0-3 km) CAPE builds up along the boundary, up to 250-400 J/kg, while MLCAPE reaches 1500-2500 J/kg. Intense severe thunderstorms, capable of producing strong tornadoes are expected to develop along the front. Additional threats will be large to very large hail, torrential rainfall and severe straight line winds. A particular area of interest will be the coastal area of southern Tuscany, Lazio and Campania. Low level wind is maximized in this area, pushing low level shear and helicity into values supportive for strong and even violent tornadoes: 300-400 m2/s2 SREH1 and 20-35 kt 0-1km shear. Tornadoes, even strong ones are possible with any supercell that develops there. 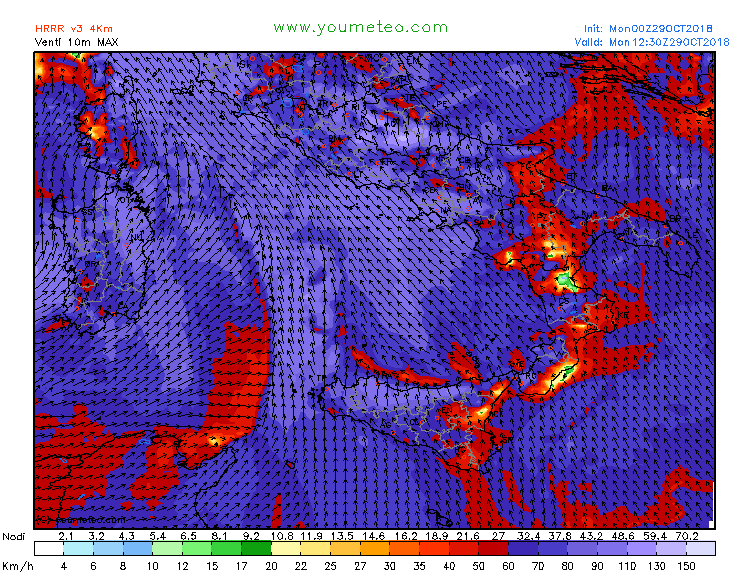 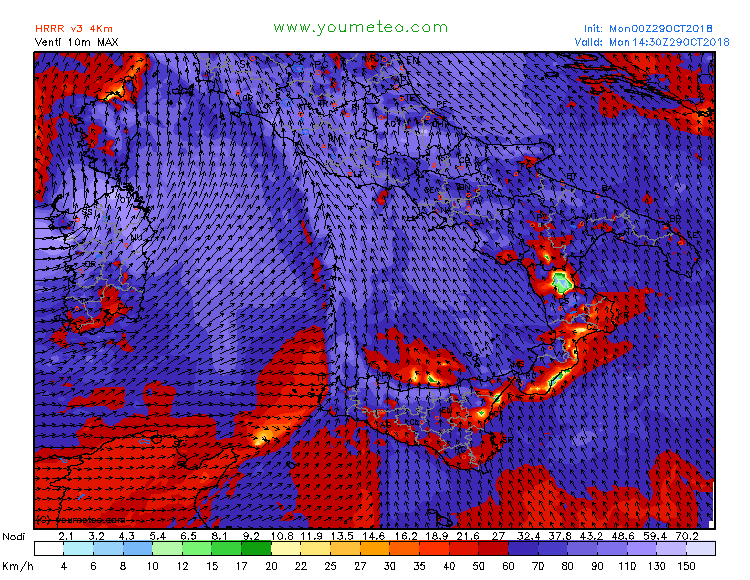 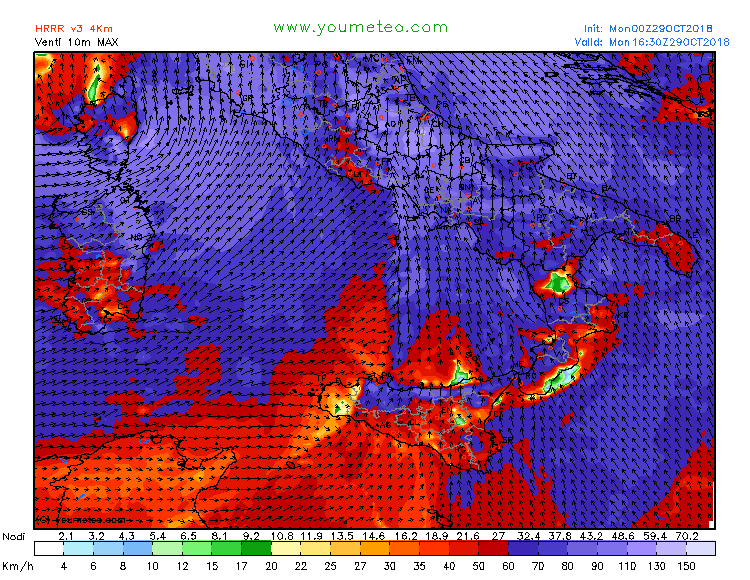 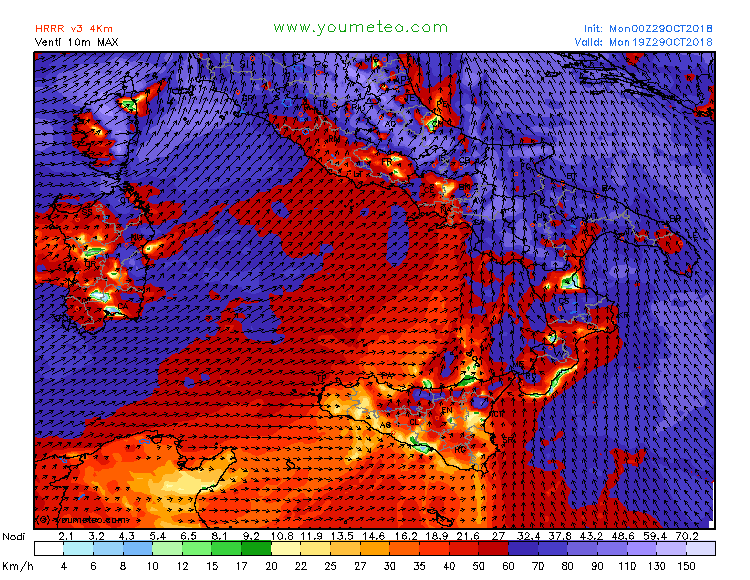 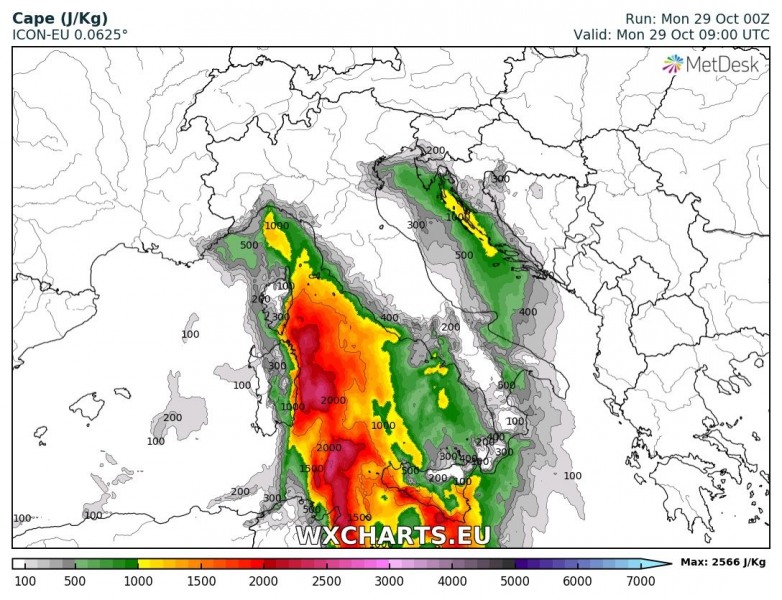 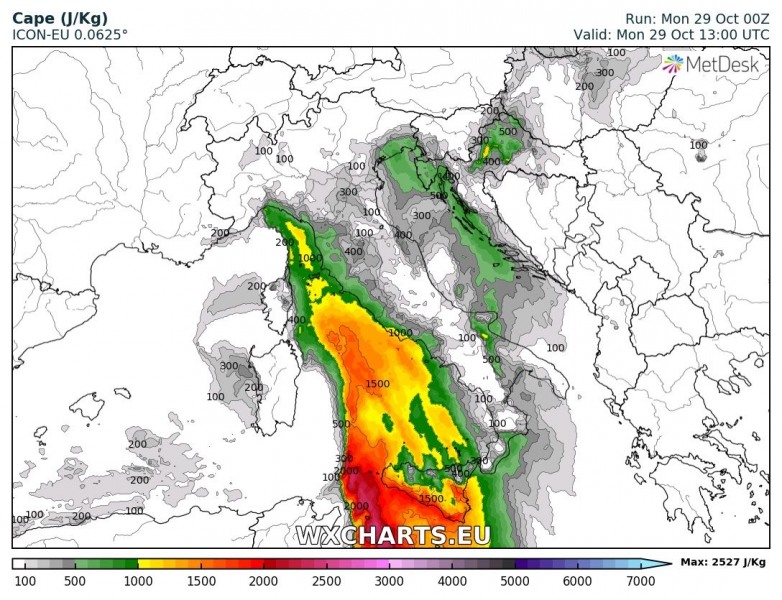 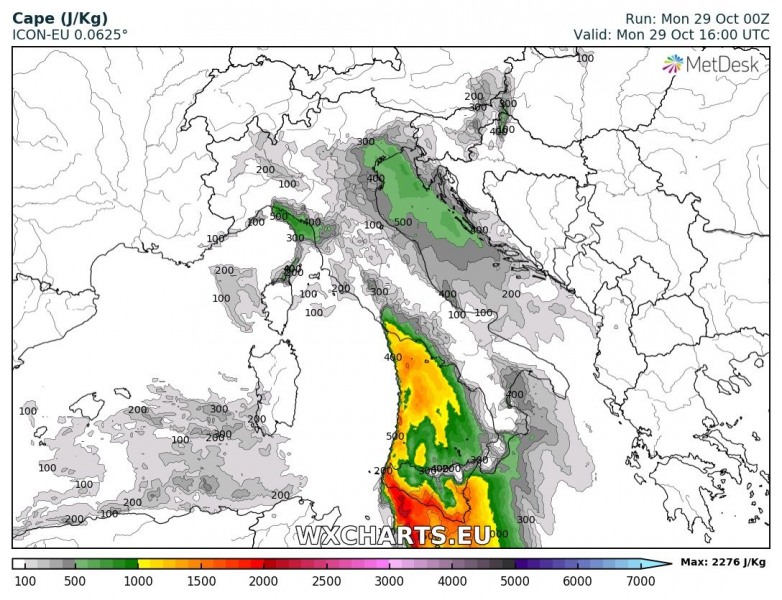 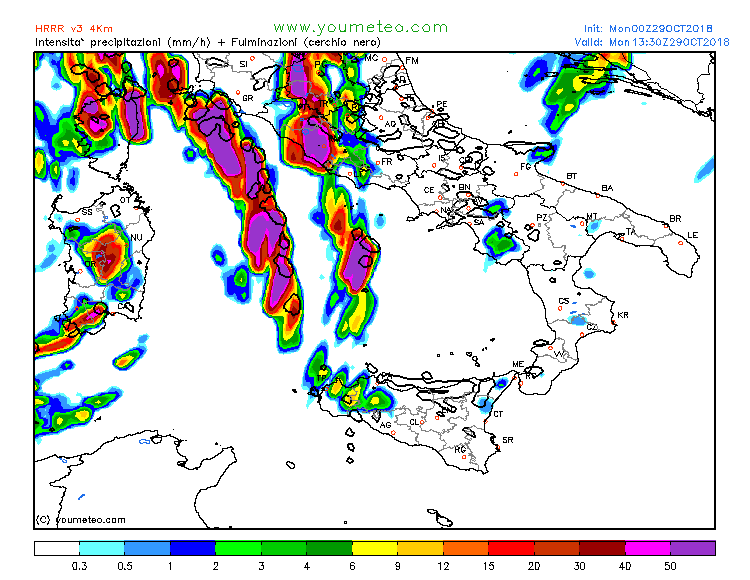 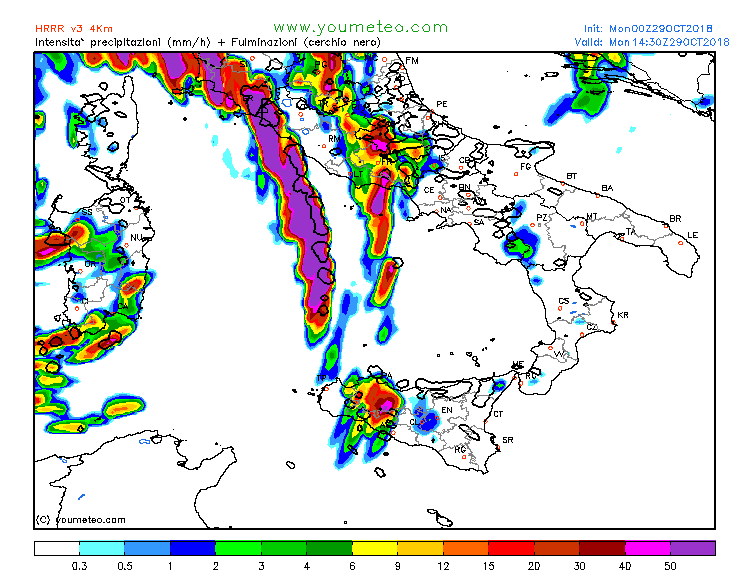 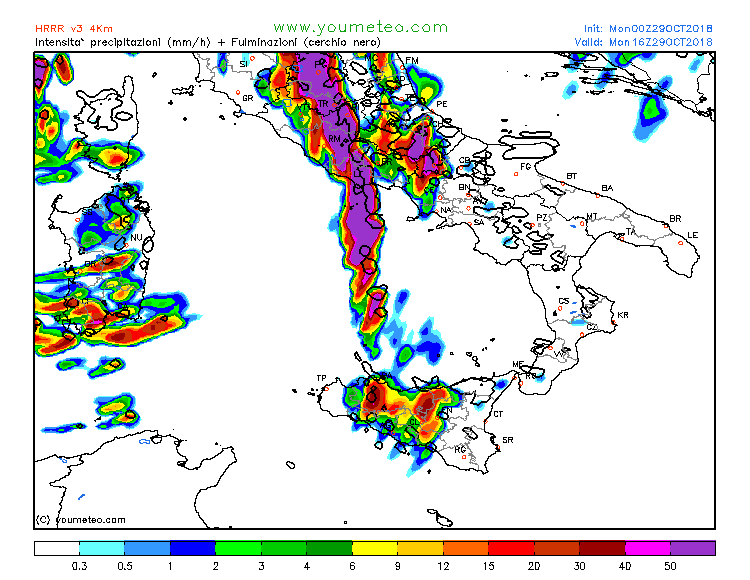 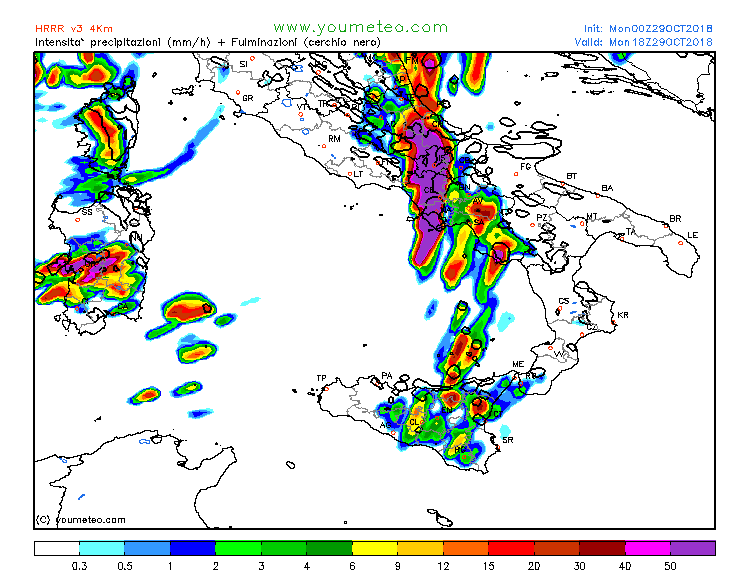 Rain rate and lightning rate over the Tyrrhenian sea on Monday. A strong squall line with discrete storms is indicated. Map: Youmeteo.com.

Intense Scirocco winds will develop over the Adriatic sea, advecting warm, moist airmass northwards. Various high resolution models indicate an exceptionally strong low level jet will develop, with up to 40-45 kt (80 km/h) at surface level, 70 kt at 925 mbar level and 75-80 kt at 850 mbar level. The jet will push all the way across the northern Adriatic and into the plains of northern and northeastern Italy. Moderate instability will develop ahead of the cold front, expected to push through in the afternoon. Models indicate 800-1000 J/kg MLCAPE to develop across the central and eastern Po plain in north Italy, plains of northeastern Italy and up to 800-1200, perhaps up to 1500 J/kg over northern Adriatic, including western Slovenia and western Croatia. A southerly mid-level 60 kt jetstreak will overspread the region.

Ahead of the cold front, strong Scirocco wind will be channeled along the southern flank of the Alps into a predominantly easterly direction. This will strongly enhance shear and helicity. Enhanced values of SREH1 in 200-400 m2/s2 range (locally even more) and 0-1 km shear in 20-40 kt range (locally more) will be strongly supportive for tornadoes. Currently the most uncertain factor in pre-frontal storm initiation and maintenance is the rather modest instability in very strong wind shear, combined with unfavourable storm motion: while storms will likely initiate due to enhanced orographic forcing along the southern flank of the Alps, the storm motion will be mostly northerly, strongly reducing the storm’s longevity in the in the flat terrain south of the Alps before being pushed into the mountains. Any storms potentially forming along surface convergence zones further south will have a better chance.

Much more persistent thunderstorms are expected along the sharp frontal boundary. The cold front will move across the plains of north Italy in late morning and early afternoon, before pushing across the Adriatic sea into western Slovenia and western Croatia in late afternoon and evening. Storms are likely to merge into a squall line, although for any supercells within the line the storm motion deviation is likely to be sufficient for storms to remain discrete. Any persistent storm within the squall line will have the potential to become tornadic.

Tornado threat will be maximized over the plains of Veneto and Friuli Venezia-Giulia, and the northern Adriatic, along the coastal area of W Slovenia and W Croatia. A tornado cannot be ruled out further inland in W-CNTRL Slovenia or W Croatia.

An additional threat will be the rising potential for a damaging windstorm across the northeastern Adriatic region (including west-central Slovenia and northwestern Croatia), as south/southeasterly Scirocco winds will likely peak at 120-140 km/h locally, with even higher speeds in the higher terrain of the Dinarides and southern Alps. Powerful winds with sustained speeds of 80-90 km/h are extremely dangerous for the region which is not used to such high wind speeds from different direction (S-SE) than the regular/frequent Bora winds (E-NE directions). 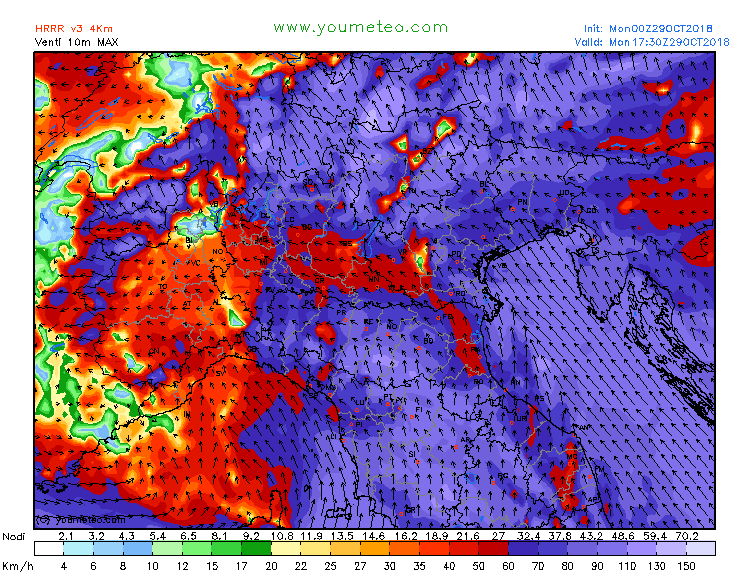 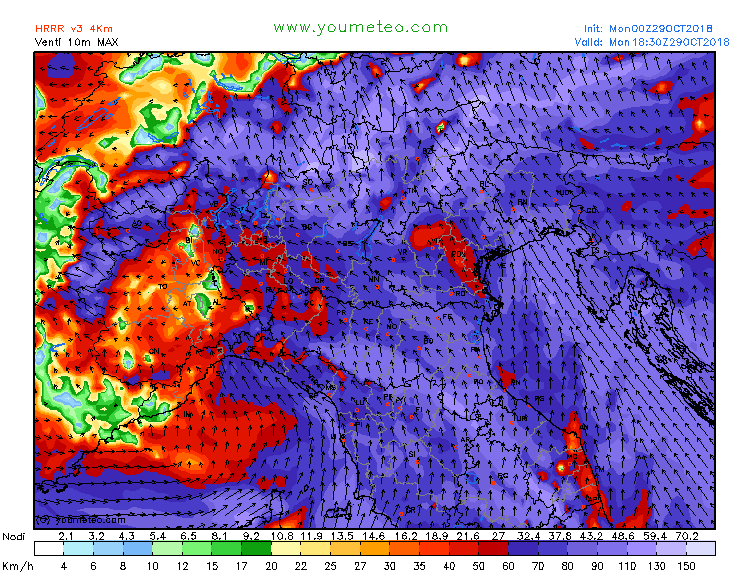 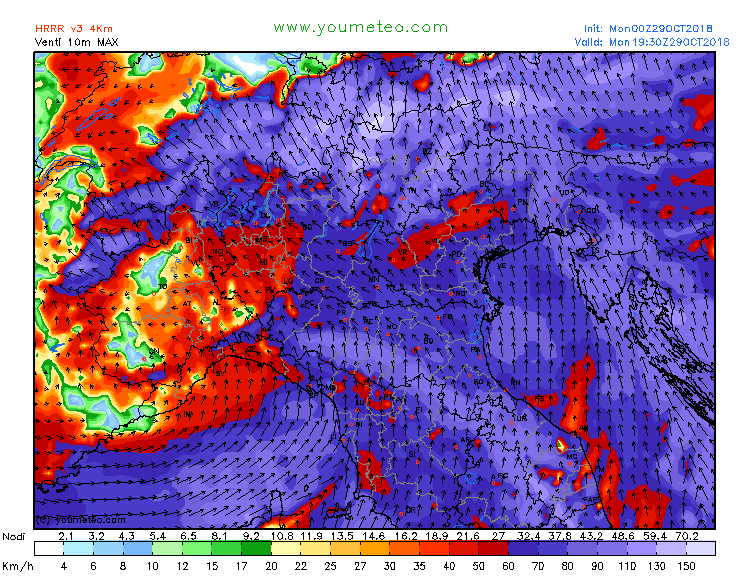 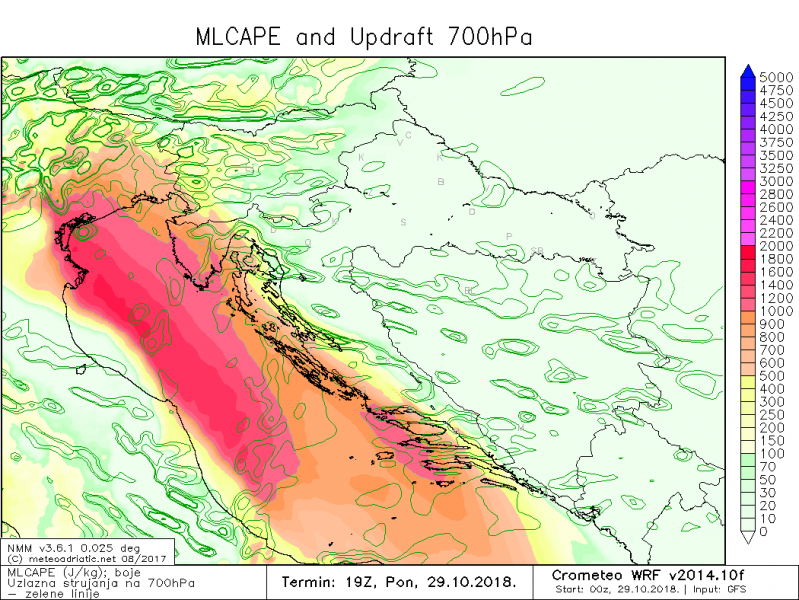 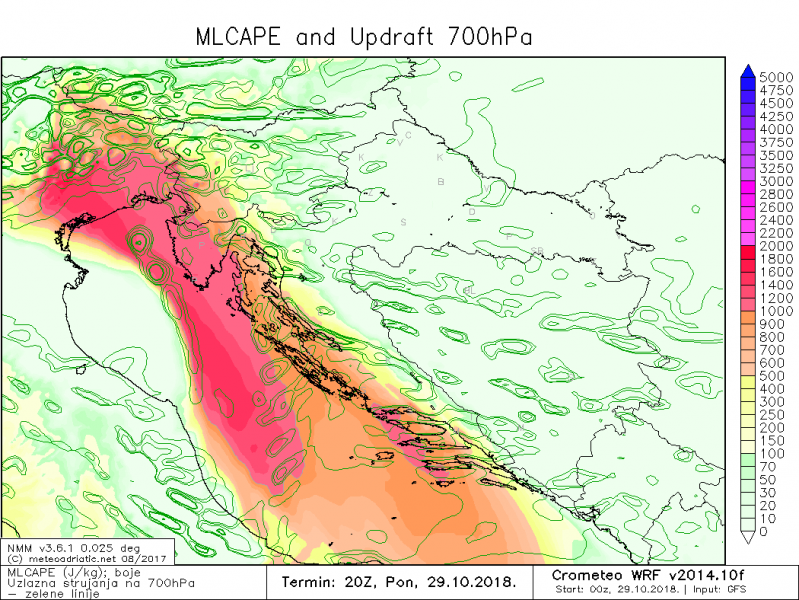 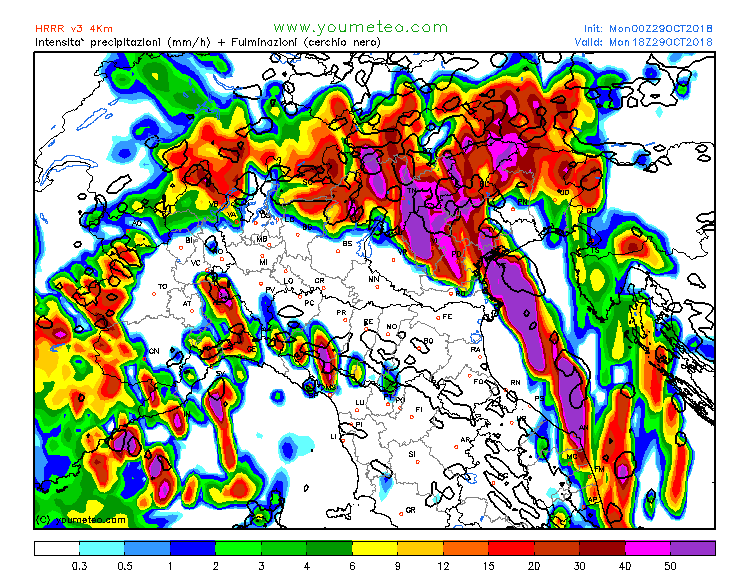 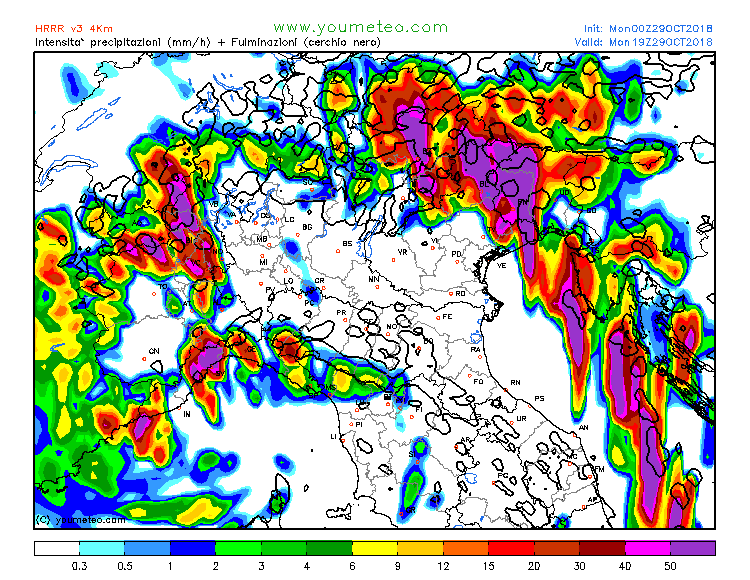 Rain rate and lightning rate over the northern Adriatic sea on Monday. A strong squall line with discrete storms is indicated. Map: Youmeteo.com.