An increasingly impressive trough is moving towards the Alpine and northern Mediterranean region. It is expected to produce very unsettled weather with severe thunderstorms and torrential rainfall over the next four days. We take a closer look at this very interesting and potentially dangerous setup. 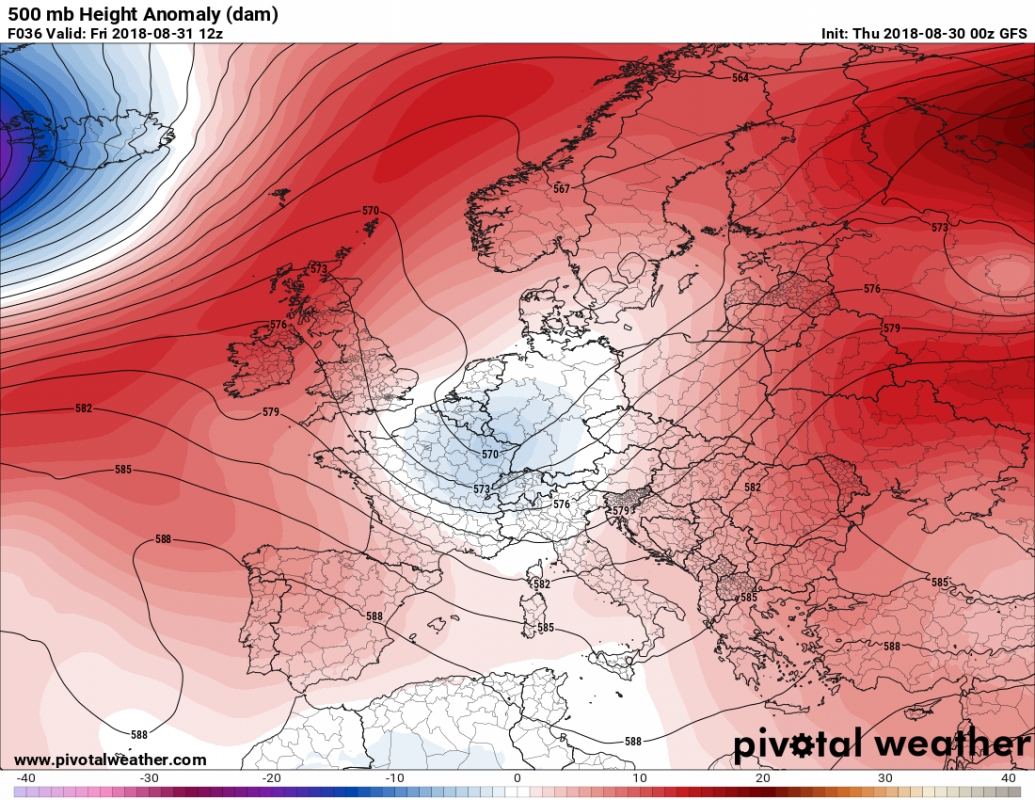 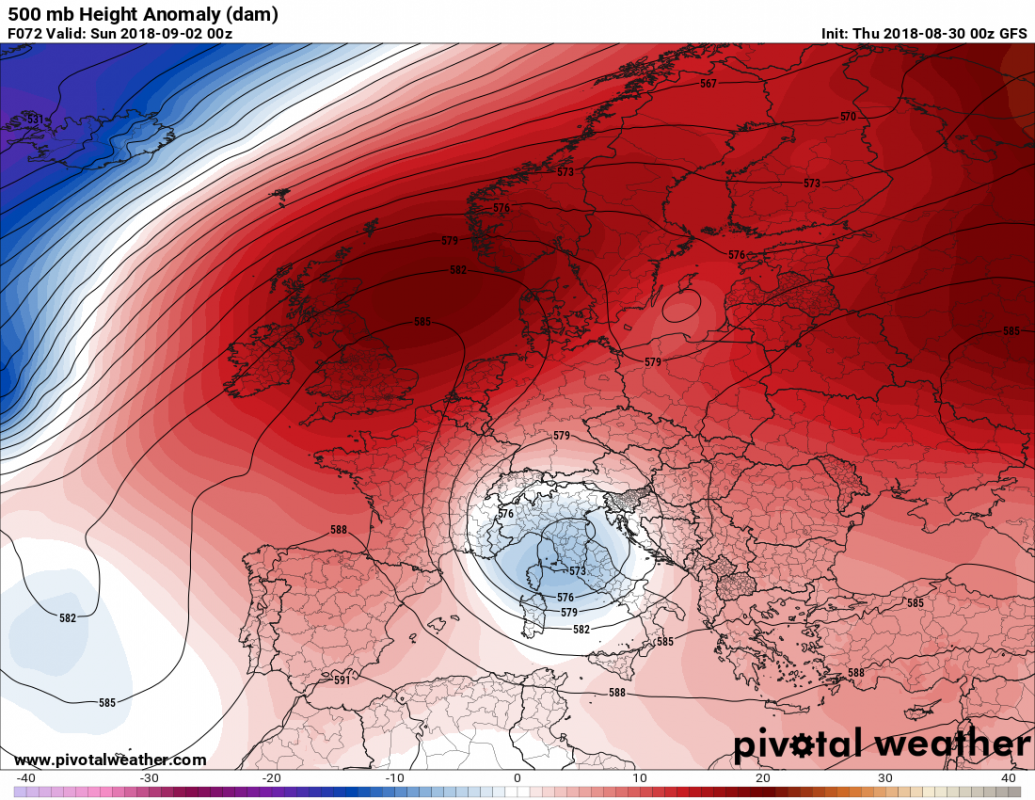 The trough transforms into a cutoff low on Friday-Saturday. Map: Pivotalweather.com

A long-wave trough is slowly moving across central Europe; it is expected to stall over the Alpine region and form a potent cutoff upper low over the weekend. Very warm northern Mediterranean, including the Ligurian and Adriatic seas will provide ample warm, moist air, overlapping with increasingly cool mid-levels. Strong instability is expected to build up, up to 2000-3000 J/kg MLCAPE. A moderately strong jetstreak rounds the southern part of the trough and later the cutoff low, with up to 30-40 kt winds at 500 mbar level. With strong upper level forcing conditions will be in place for severe thunderstorms and torrential rainfall. 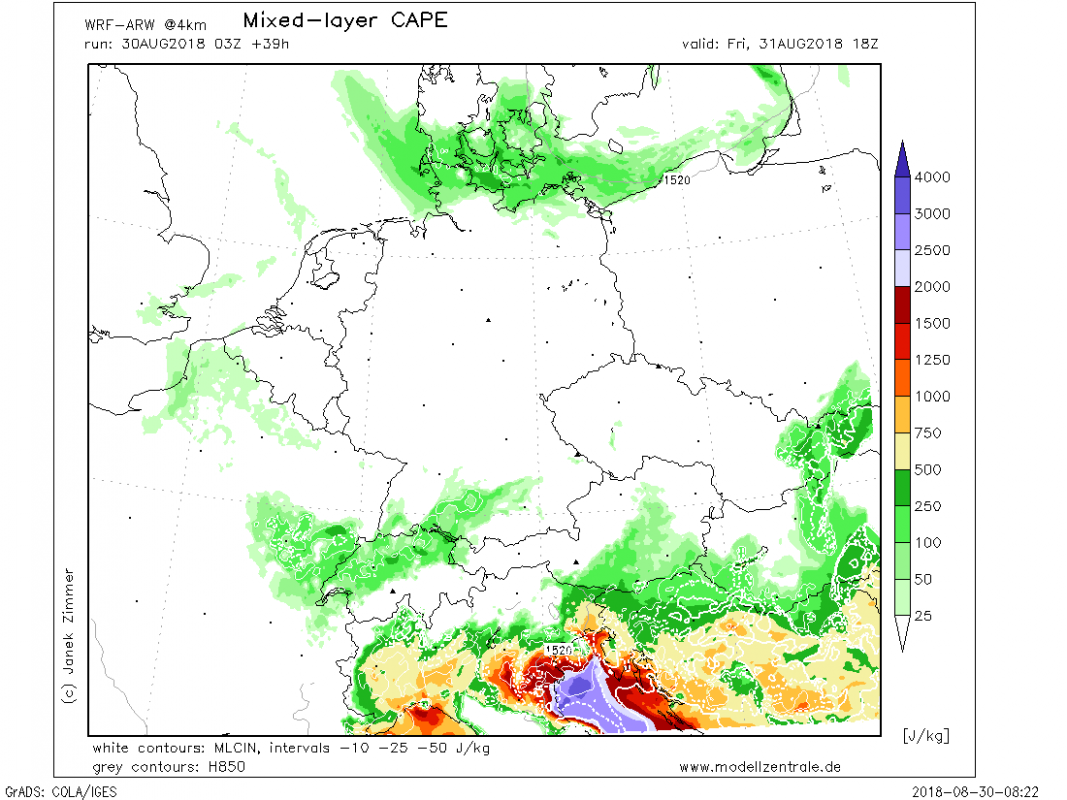 MLCAPE over the region late on Friday. Values up to 2000-4000 J/kg expected. Map: Modellzentrale.de 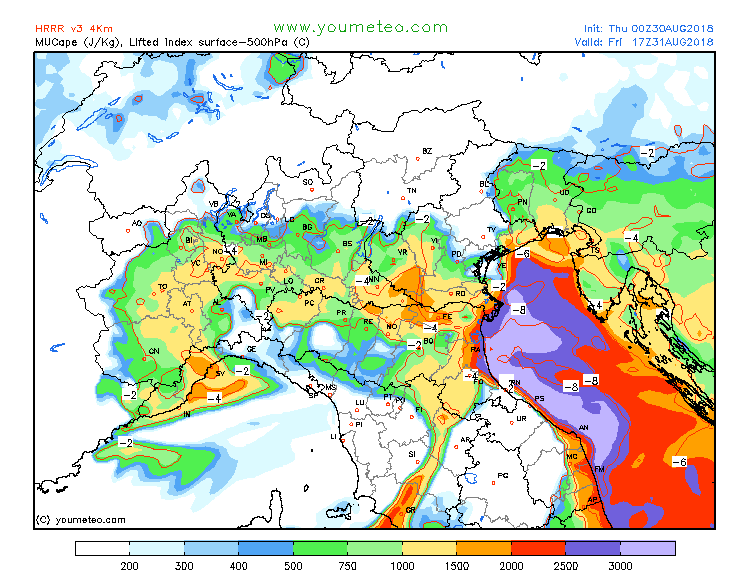 While guidance by various models differs somewhat, there is a general agreement: most storm activity on Friday will be over the western Alps and northwestern Italy with isolated prefrontal severe thunderstorms over the plains of north and northeastern Italy / northern Adriatic. As the trough slowly pushes eastward and transforms into a cutoff upper low, thunderstorms move eastwards with the focus of activity likely over the northeastern Italy, southern Austria, western and central Slovenia and northwestern Croatia on Saturday and Sunday.

The most intense thunderstorms are expected along the coastal areas of the Adriatic sea: north and northeastern Italy, western Slovenia and northwestern Croatia. Models agree on high instability being available there. Moderately strong southerly to southeasterly Scirocco / Jugo winds are expected, enhancing low level shear. Multiple squall lines are expected to form along surface convergence zones and short-waves skirting the southern edge of the system from Friday to Sunday. Discrete / isolated storms (supercells) are expected particularly on Friday with the sufficient vertical veering wind profile. As the pattern progresses the mid-level flow shifts from southwesterly to increasingly southerly and even southeasterly, providing a more unidirectional vertical wind profile favourable for slow-moving squall lines and persistent training cells, producing persistent torrential rainfall. The effect will locally be further enhanced by orographic forcing along the southern flanks of the Alps and western flanks of the Dinarides. Deep-layer shear remains strong (30-40 kt), discrete supercells are still expected within squall lines. 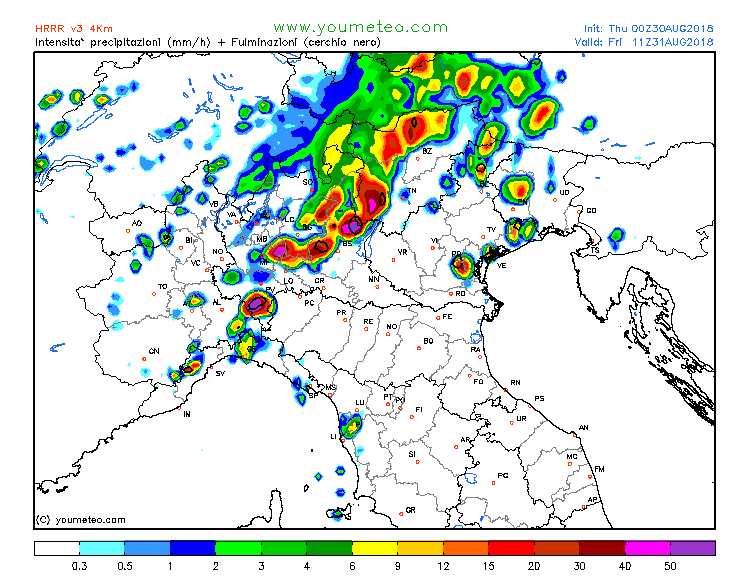 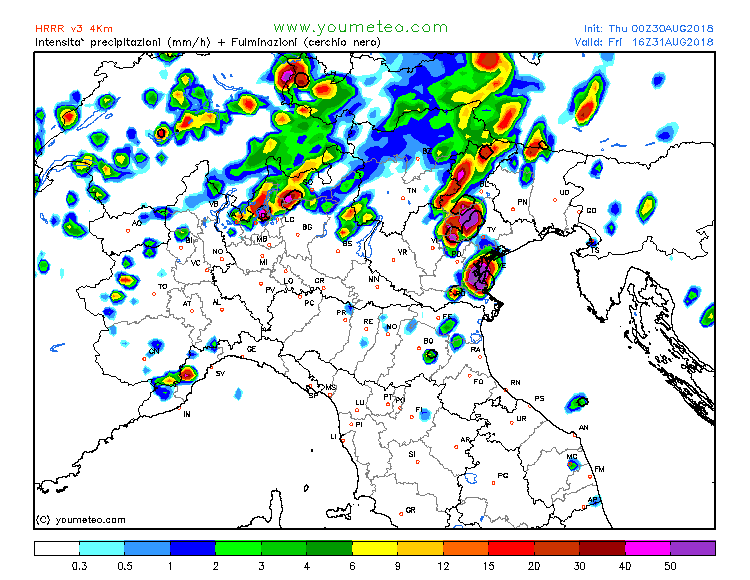 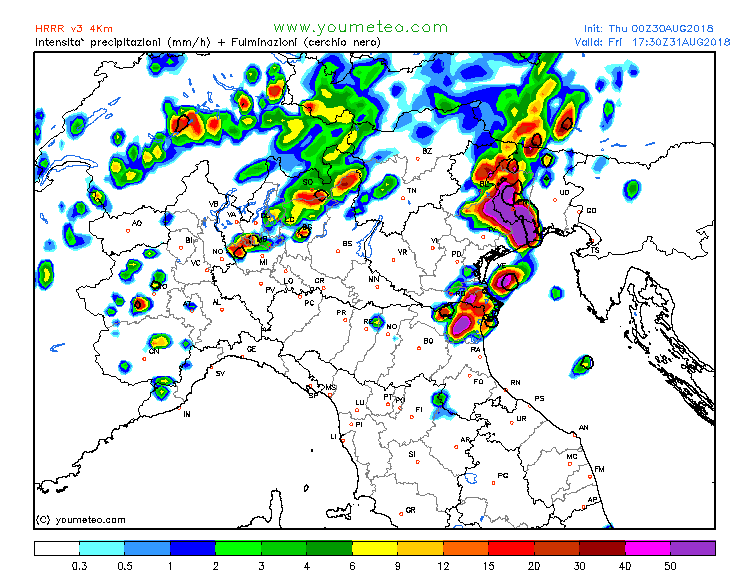 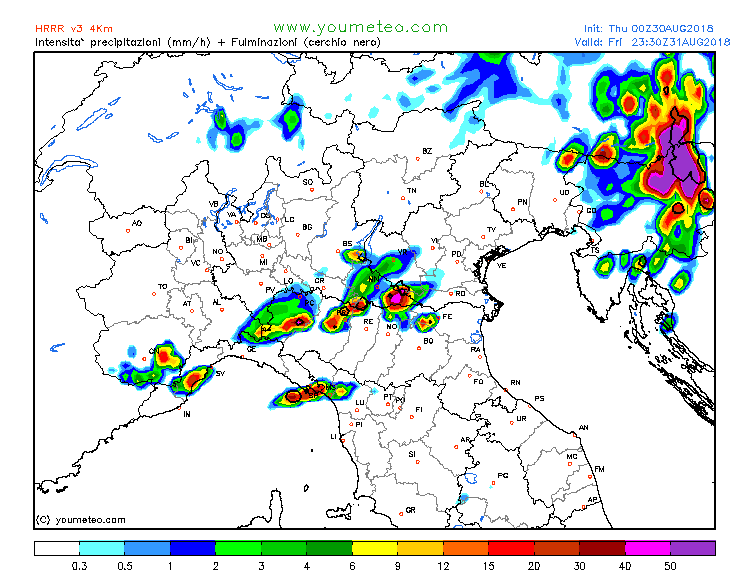 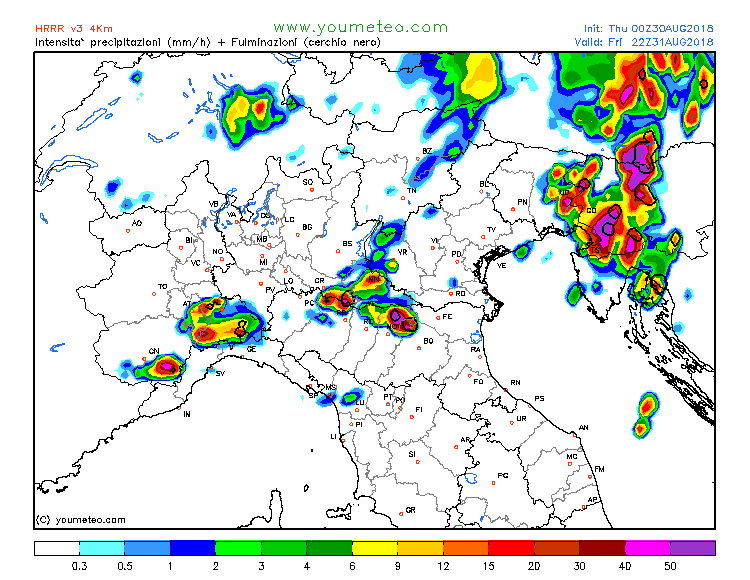 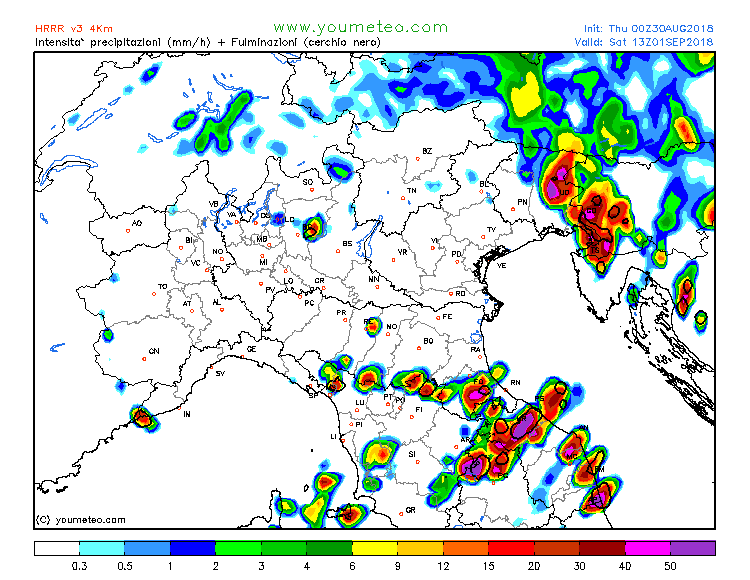 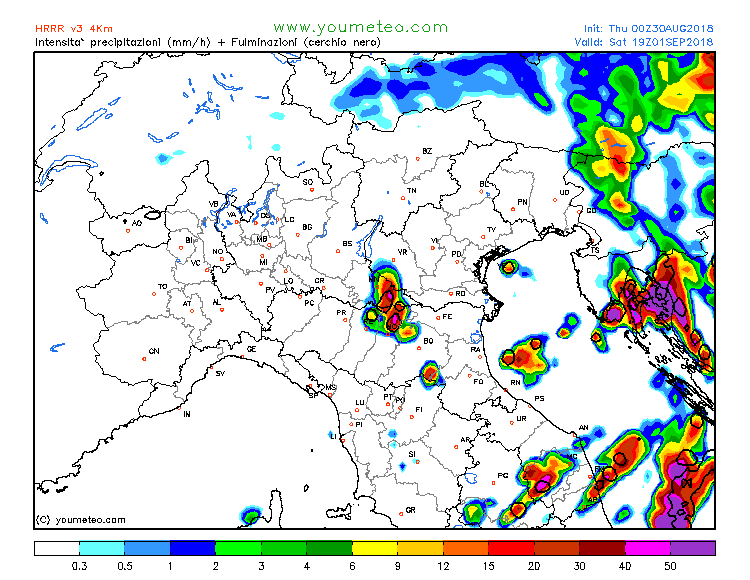 Simulated radar reflectivity over the region on Friday and Saturday. Map: Youmeteo.it

Rainfall totals over 100 mm and locally in excess of 200 mm are expected. Expect local rivers and streams to rise significantly, with local flooding / flash flooding likely. 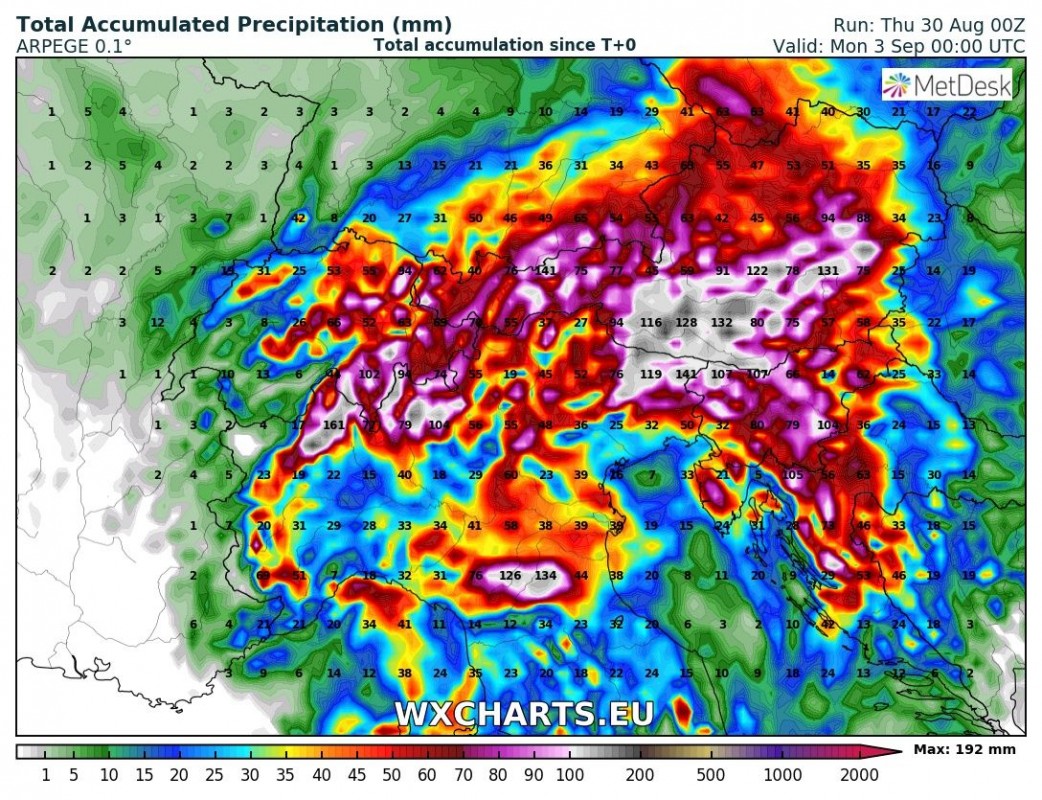 This will be an extended active pattern with severe weather threats over 3 to 4 days: severe weather coverage will likely be moderate. The situation is not expected to be particularly dangerous, however, keep an eye out for thunderstorms and in particular for persistent rainfall which may well cause locally intense flash floods.

The cutoff low is expected to persist over the northern and central Mediterranean well within the next week, as a rex block establishes over Europe. It will bring more unsettled weather into the region.