Europe is entering a warmer pattern through the end of August and early September as a large ridge is expected to develop this coming weekend. At first, a trough is pushed from western into central Europe. It will bring some severe weather into the region, followed by a rapidly strengthening upper ridge. The ridge will dominate much of Europe and result in warmer and more stable weather. Meanwhile an upper low across north-central Mediterranean is expected to bring unsettled conditions to that region over the weekend and early next week.

The current pattern across Europe reveals a change from the past days as an upper low over the Adriatic sea is ejecting into SE Mediterranean and ridge is strengthening across central and northern Europe. Warm weather is returning into large part of our continent. 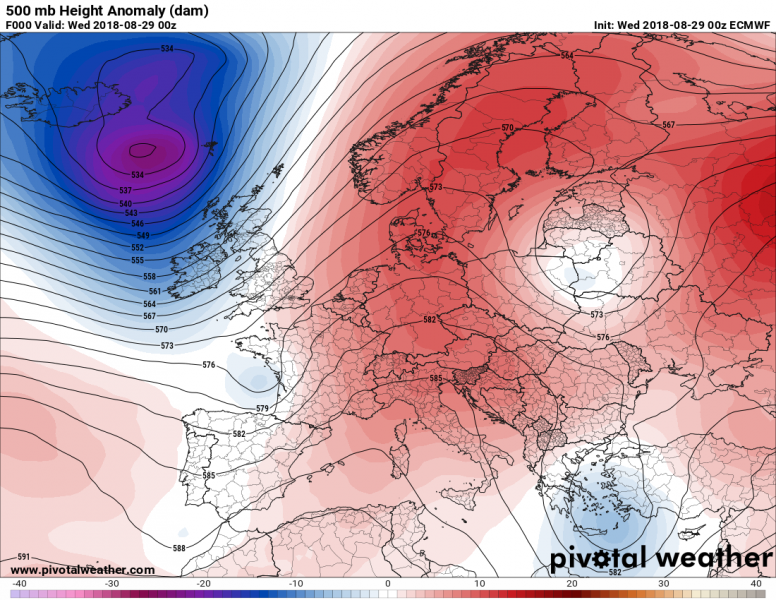 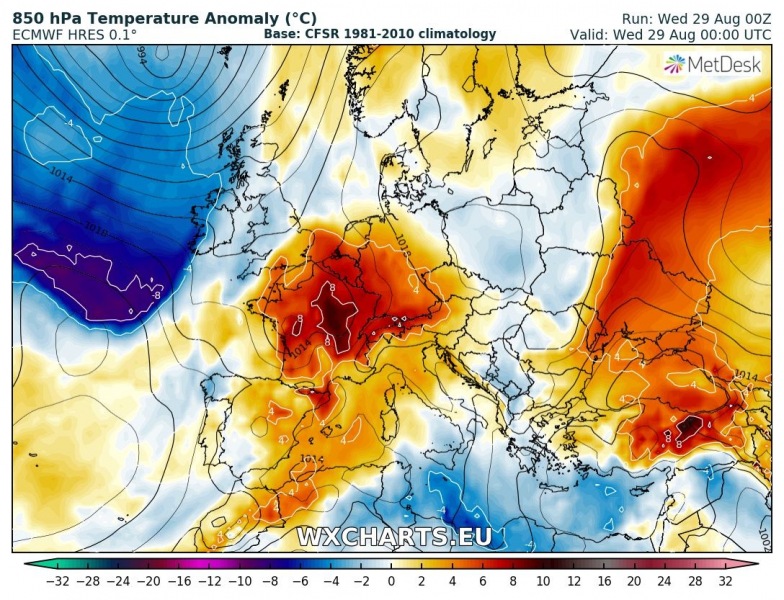 An interruption of the developing ridging pattern is foreseen on Friday as a short-wave trough will be pushed towards central Europe. It brings a cold front towards the Alps where organized severe storms are likely in the late afternoon and evening hours when the front crosses the mountain range. 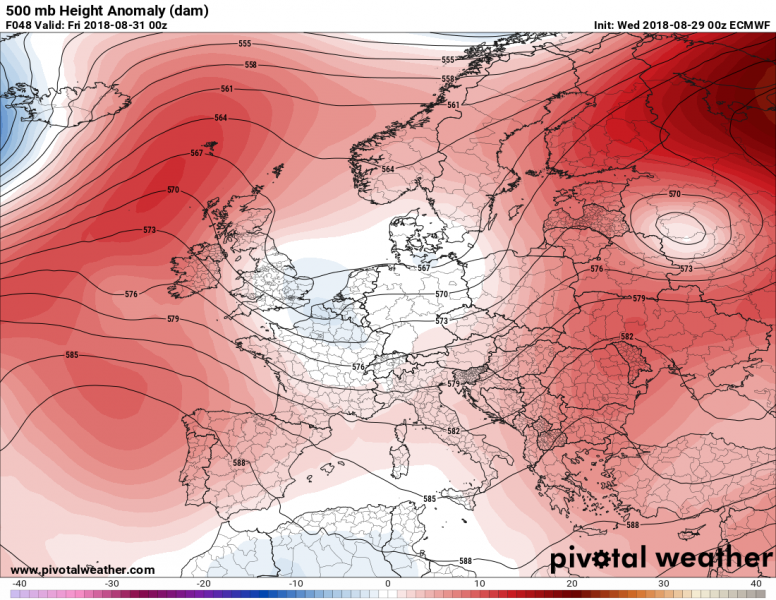 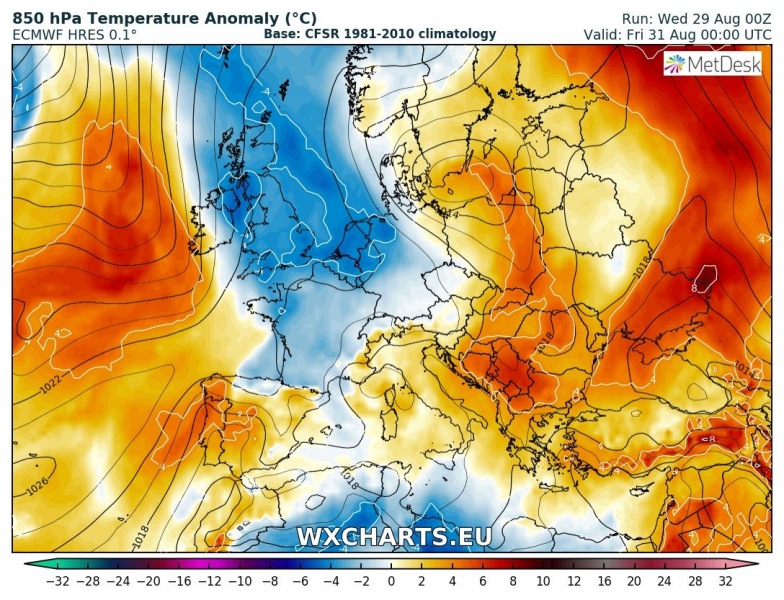 The active convective period should extend into the weekend days as well. 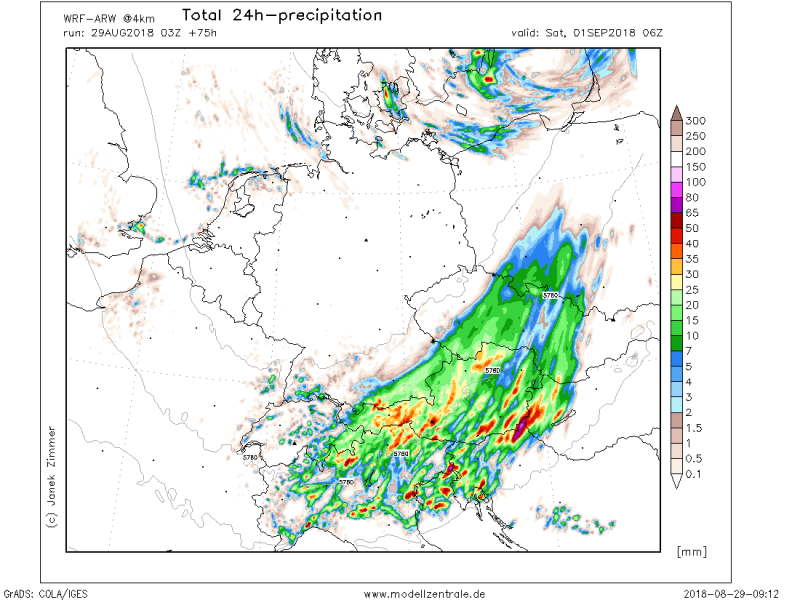 The short-wave trough brings unsettled conditions for the Adriatic region and NW Balkan peninsula. A combination of moderate instability (MLCAPE locally in excess of 1500 J/kg) and moderate deep-layer wind shear will be favorable for organized storms, including supercell storms with threat for severe winds and large hail. The still very warm Adriatic sea will locally enhance instability and therefore result in explosive convection, threat for torrential rainfall and flash floods will be possible as well. 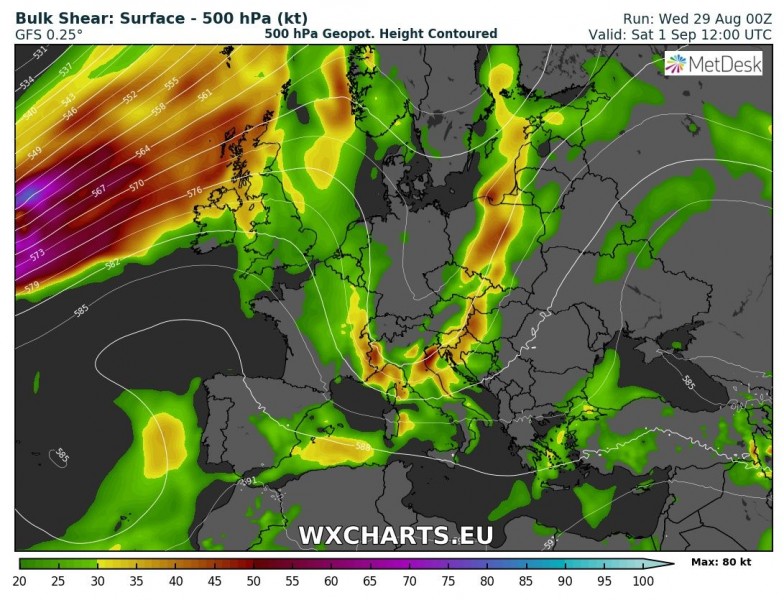 Our continent will be under a strengthening upper ridge from the western Europe, a quite rapid change in pattern in expected then. The ridge will be expanding into north-central Europe next week while the northern Mediterranean upper low will remain a focus for convective weather. 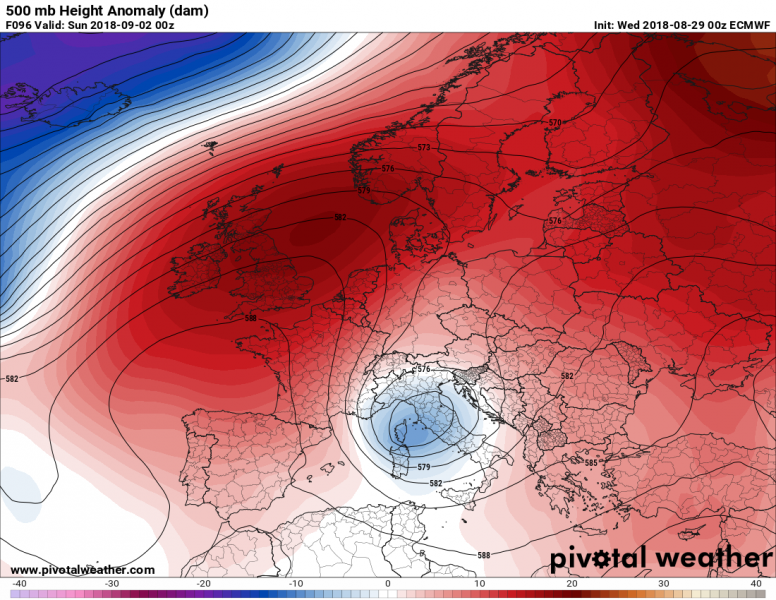 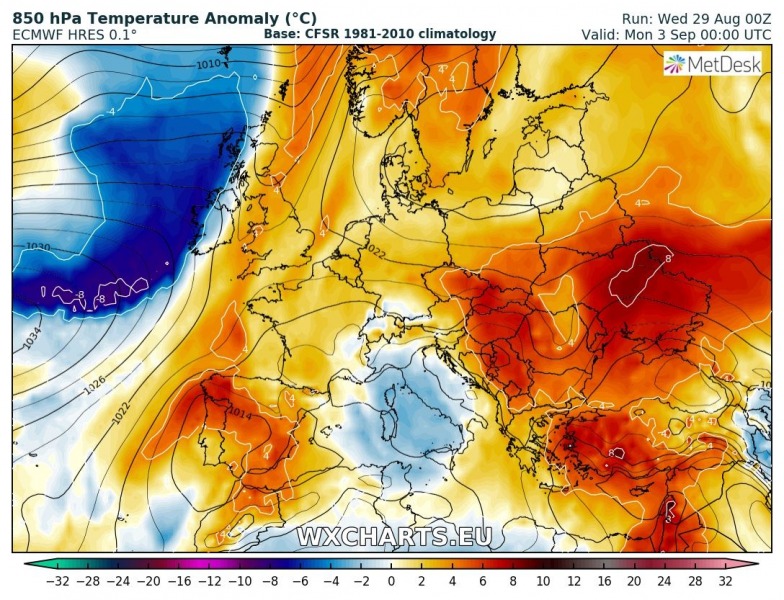 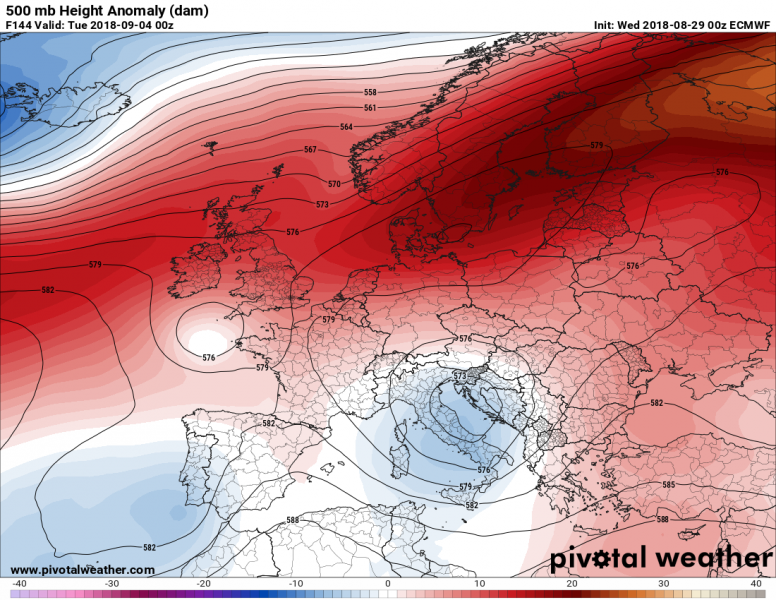 The short-wave trough transforms into an upper low and slows down over the Mediterranean on Sunday, expected to remain over the region for at least two or three days. Such setup in late summer usually results in maintaining excessive rainfall conditions as warm seas result in high instability while slow moving storms bring a lot of rainfall and local flooding. Depending on the exact position of the low, local topography features could play an additional role in the flooding threat (e.g. some models are pointing into high amounts of rainfall along the NW Dinaric mountain range). 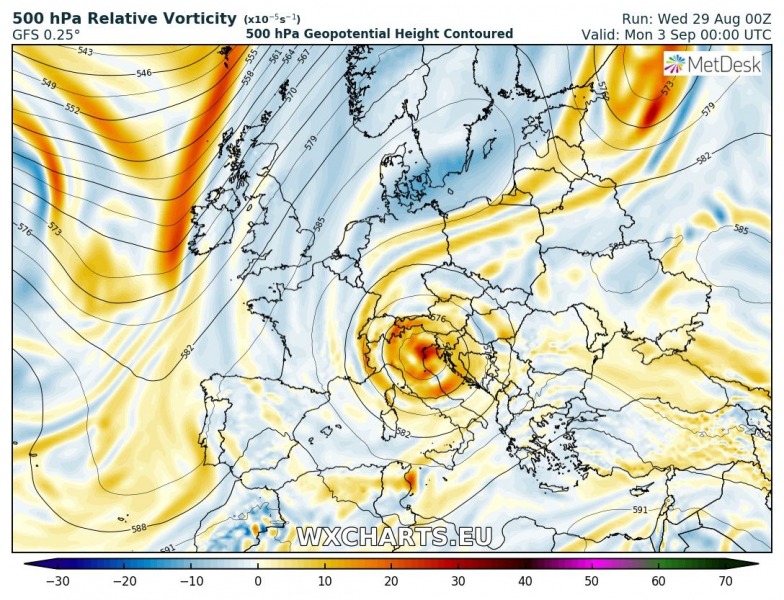 The overall pattern across the N Mediterranean, where the slow moving upper low will be the main focus for convective activity over the weekend, will likely support an excessive amount of rainfall. Models are hinting 100-200mm could result in some areas until mid next week. 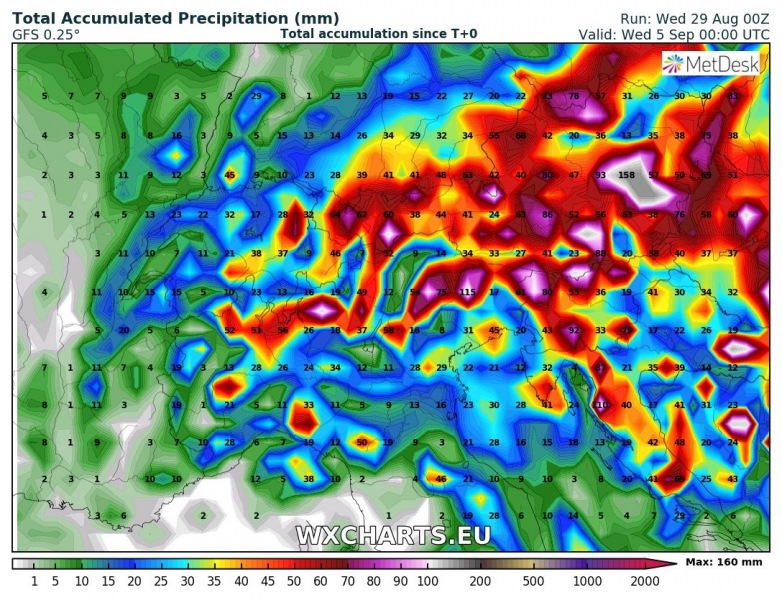 An early September will be characterized by above normal temperatures across our continent as ridging dominates large part of Europe, despite lower geopotentials across the Mediterranean. We can expect 2-4 °C warmer than average period through this period. 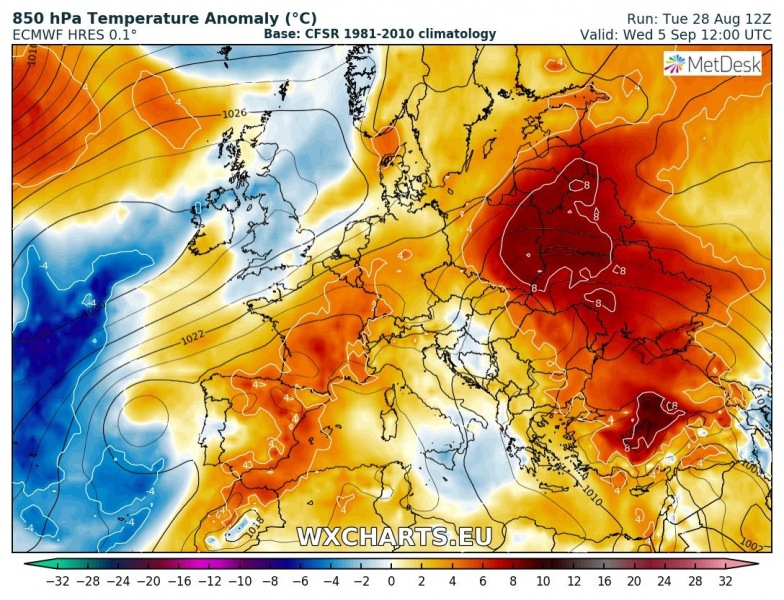 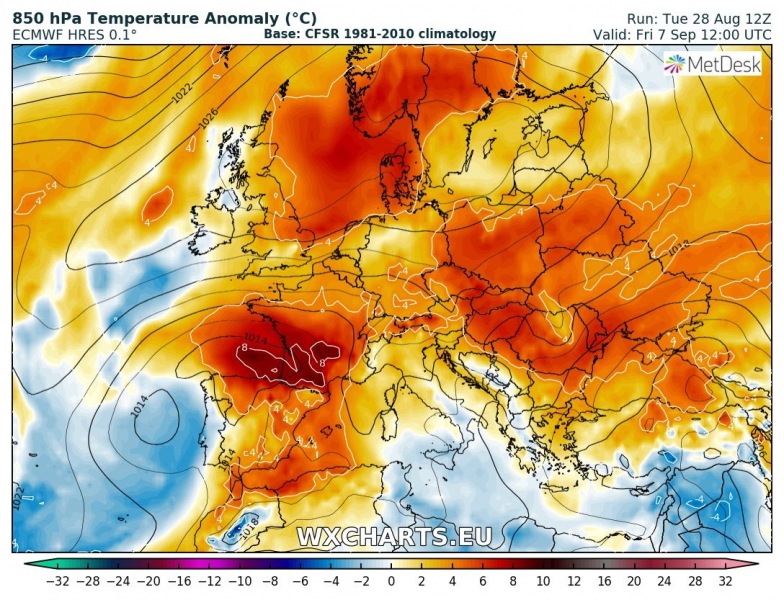 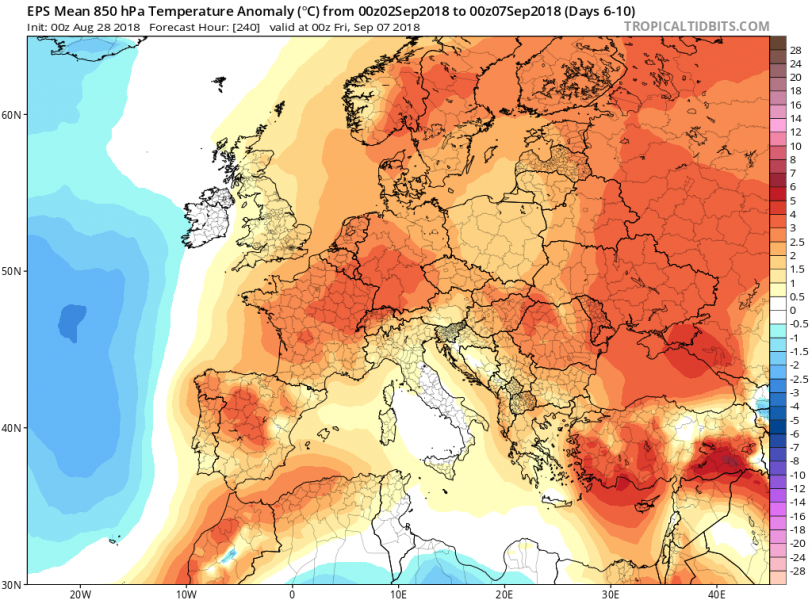 Ensemble forecast (meteogram) for Franfurt, Germany is showing the effect of the short-wave trough across central Europe this weekend, followed by a long period of above normal temperatures through early September. 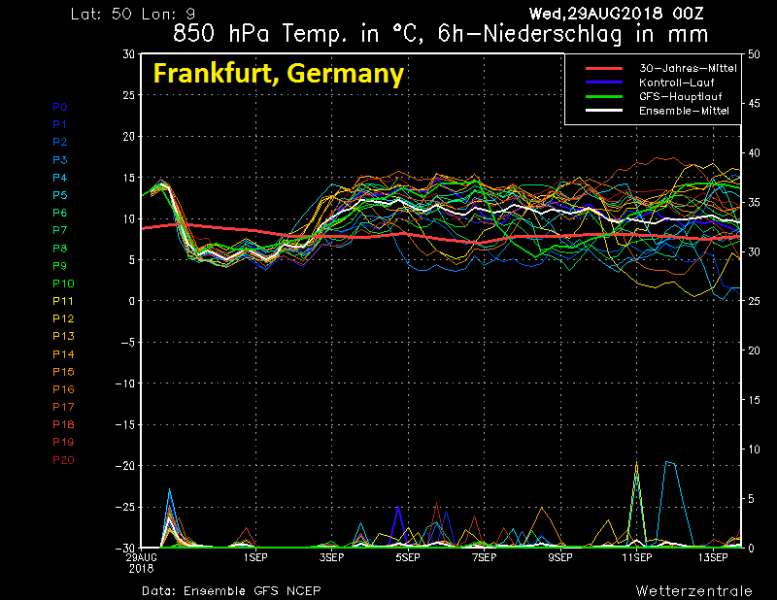 Stay tuned for further updates on the developing pattern, we will have more updates on various parts of Europe when setups come closer (e.g. severe weather threat for N Mediterranean, warmth for N Europe).