We have just ended an interesting week with record breaking and extreme heat wave across Iberian peninsula. This coming week will bring additional heat into parts of central and eastern Europe. There will also be a good refreshment in the second half of the week as a deep trough develops across E Atlantic and pushes a cold front towards east. In addition, a lot of severe weather is expected from France and Benelux on Tuesday across central Europe from Wednesday through Friday. See details below.

The new week starts with a deep trough over N Scandinavia which brought a much needed refreshment for the region which had been experiencing a severe heat wave in the past weeks. Further south, the record-breaking heat wave and upper ridge across SW Europe gradually weakens while it is expanding towards N-NE. 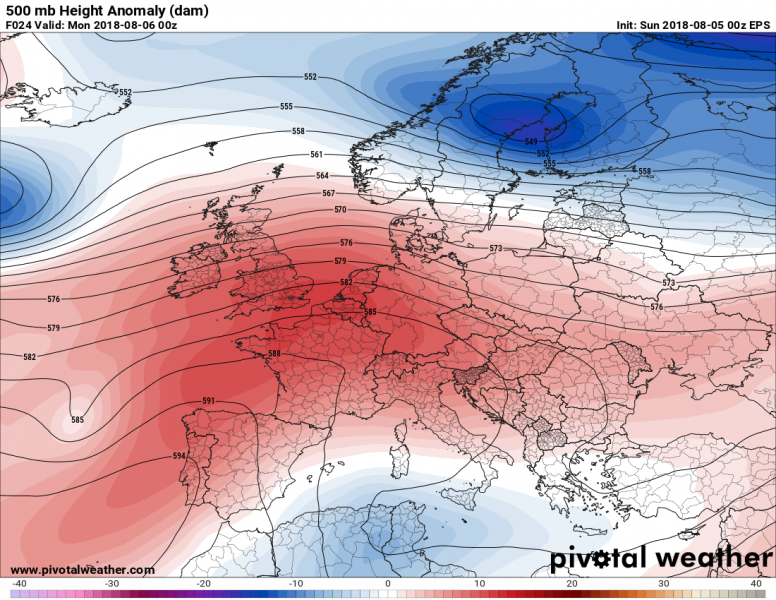 On Tuesday, Aug 7th, rapid moisture recovery and warm advection take place across parts of western Europe in between the strengthening ridge over central Europe and a deepening upper trough over E Atlantic. 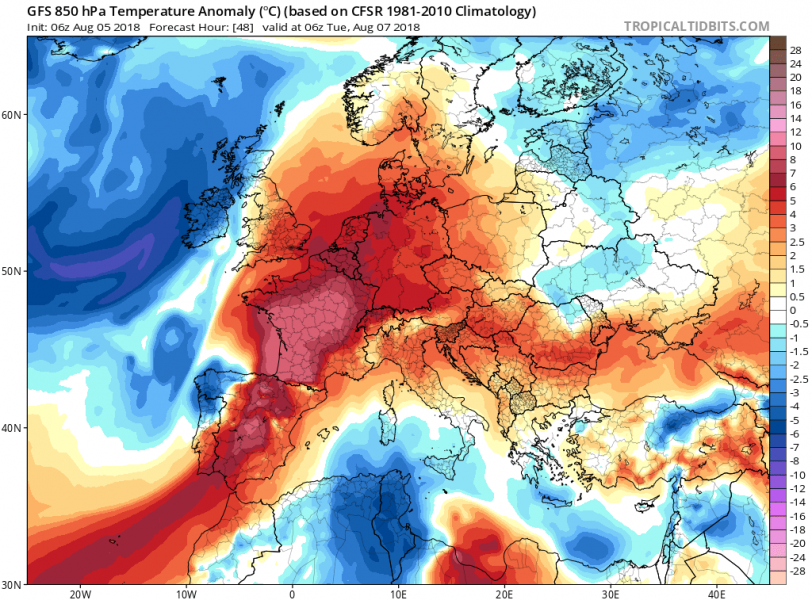 Looking at the maximum temperature map across west-central Europe, we can expect very hot weather with peak afternoon temperatures 35-38 °C across France and Benelux on Tuesday. Expect near +30 °C also across SE England. 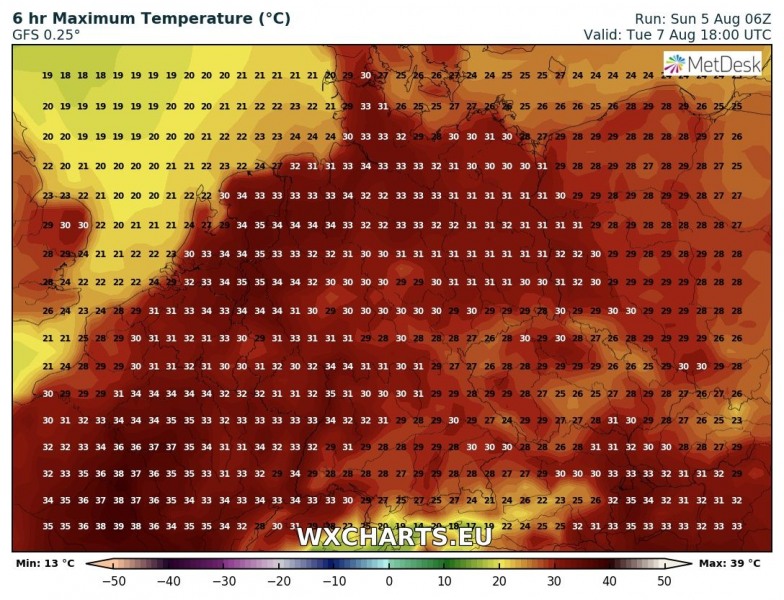 Strong instability builds up over France and Benelux with an intensifying jet stream – conditions will become supportive for severe weather in the late afternoon and could potentially develop severe thunderstorms with very large hail, damaging winds and torrential rainfall threat. 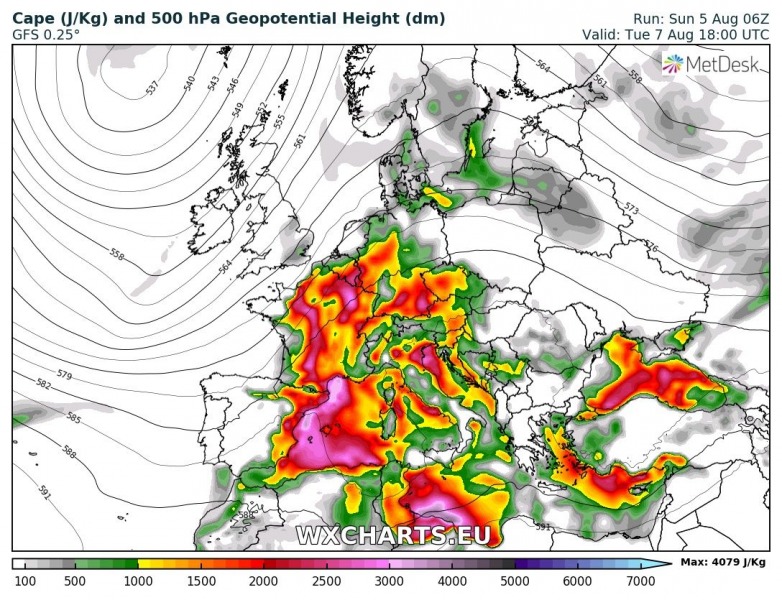 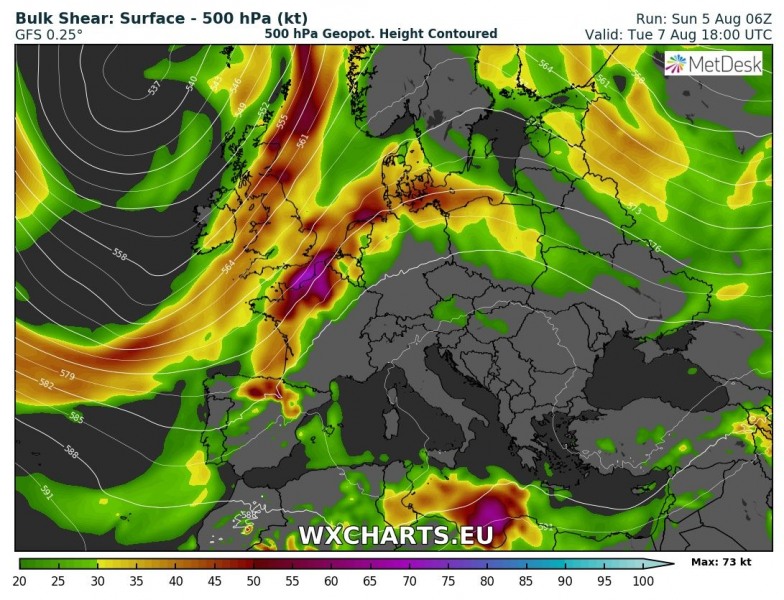 Various high resolution models are pointing at robust supercells and large clusters of storms spreading from N France into Benelux through the evening hours. 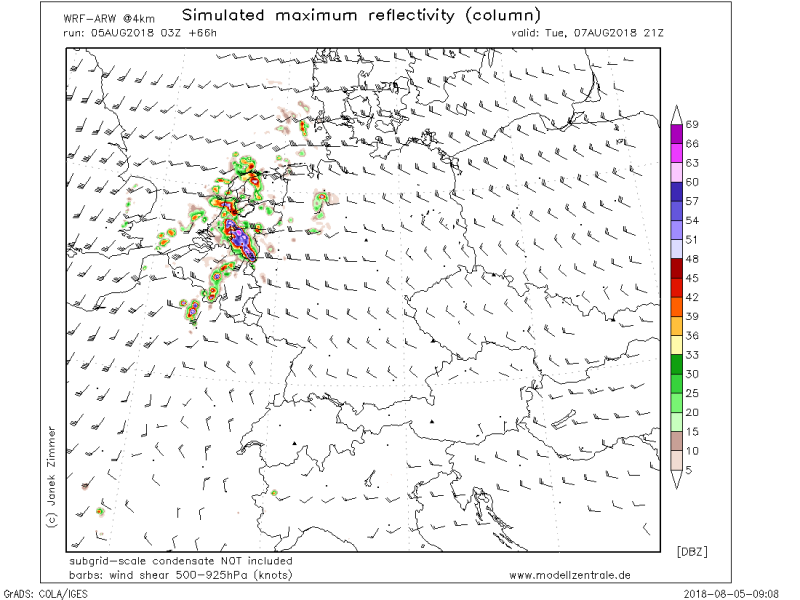 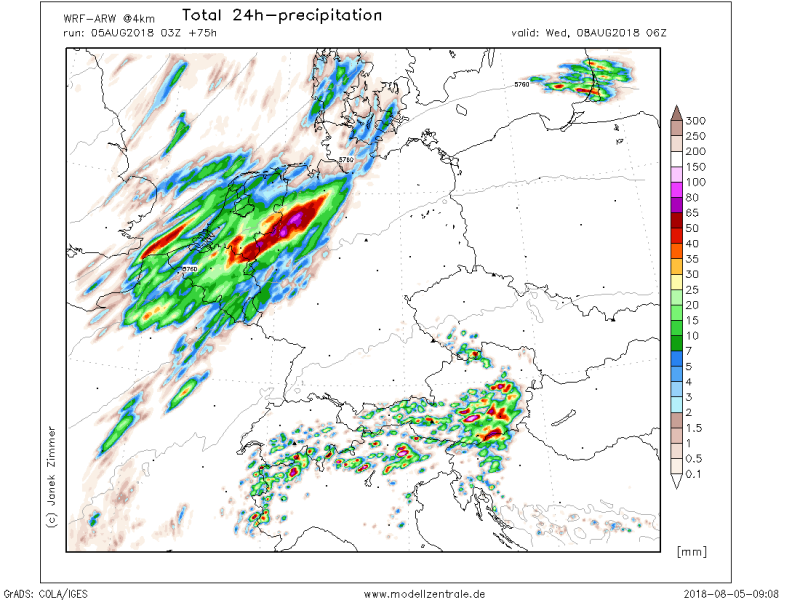 On Wednesday, Aug 8th, when the upper ridge pushes further towards NE Europe, the heat wave significantly strengthens especially over N Germany, Denmark and S Sweden as strong warm advection takes place ahead of the deepening trough over western Europe. 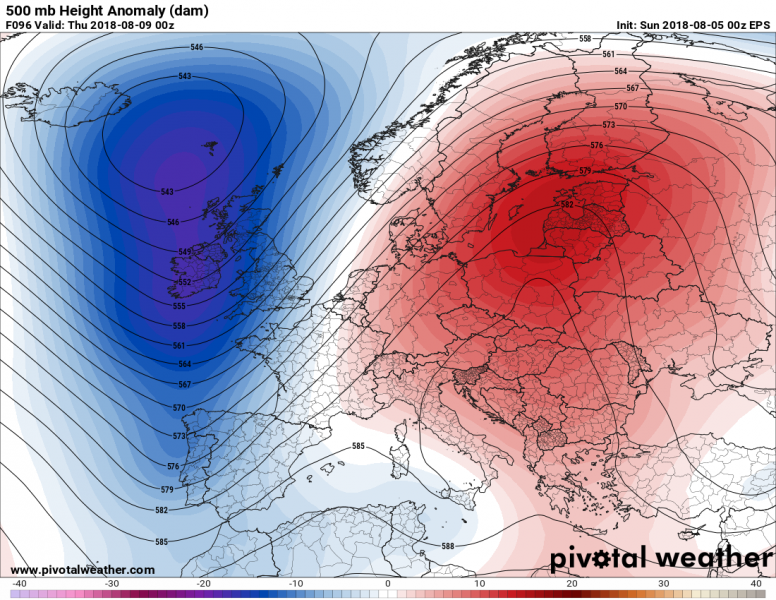 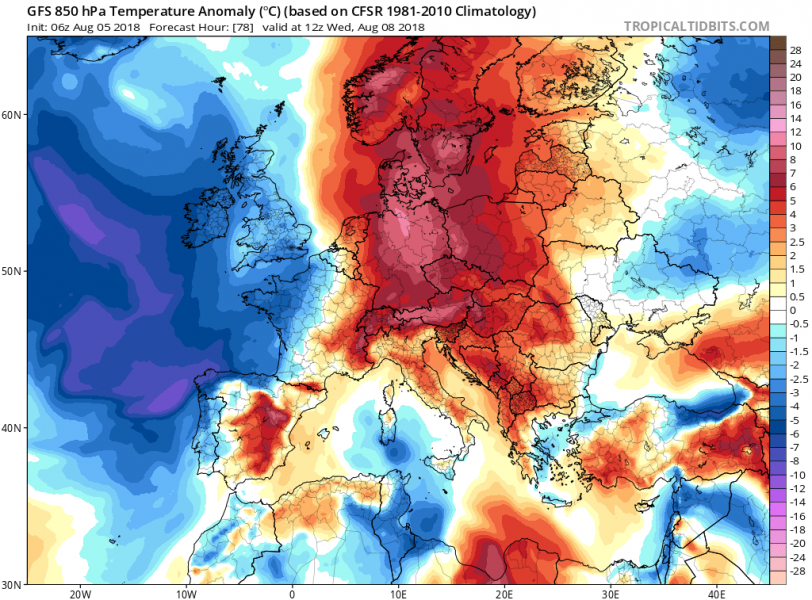 Potential exists for a near-record temperatures in this region as peak afternoon values could push well above the +35 °C threshold! 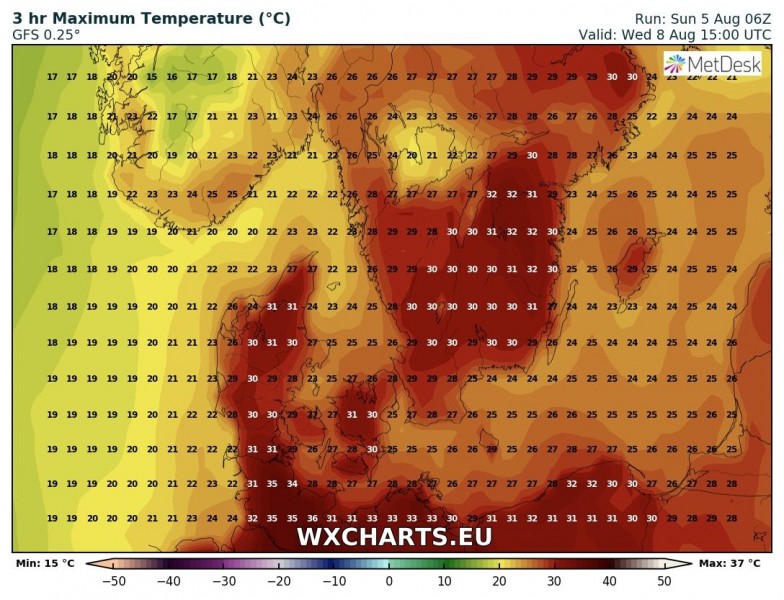 Another concern on Wednesday is the severe weather setup across Germany as strong instability overlaps with quite strong shear across the right-entrance region of a strong jet streak. This could become a potentially dangerous severe weather outbreak across – we will have more details on this event in the coming days. 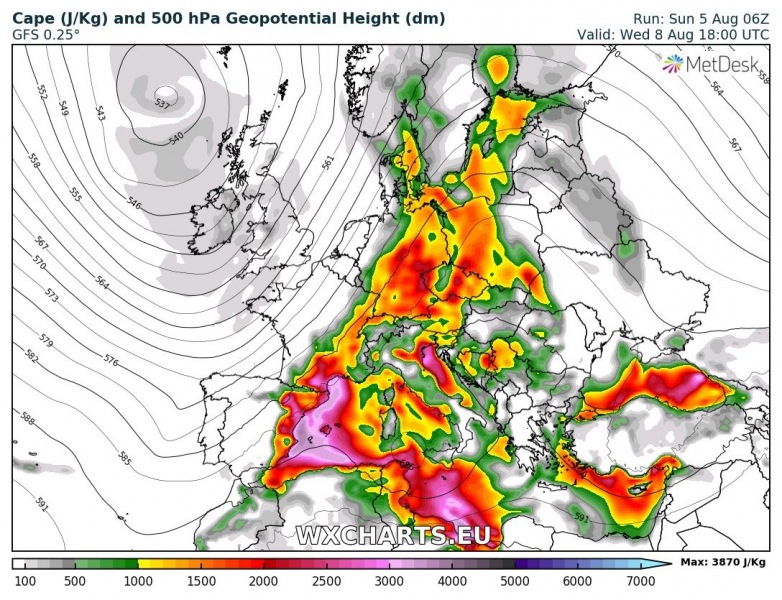 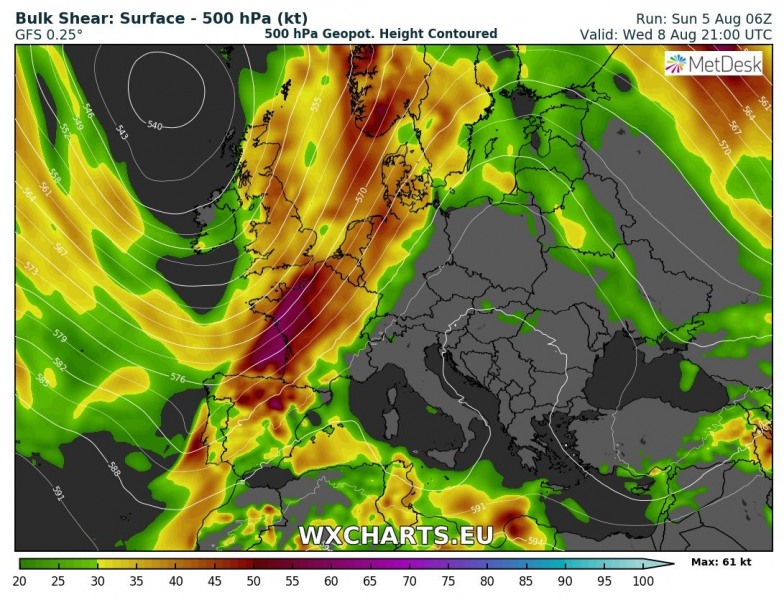 On Thursday, Aug 9th, similar conditions of overlapping strong instability and shear exist across NE Germany, Poland and also Czech Republic. The pattern on both days suggests robust severe weather is likely, including supercells with very large hail, damaging winds and tornadoes. And also large storm clusters developing in the peak afternoon and evening hours. Another severe weather outbreak will be possible on this day. However, details on this setup are to follow later this week. 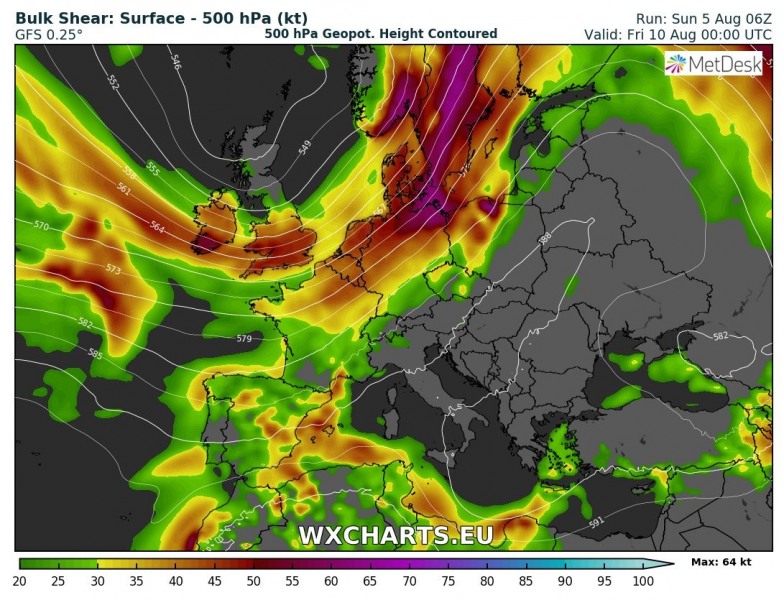 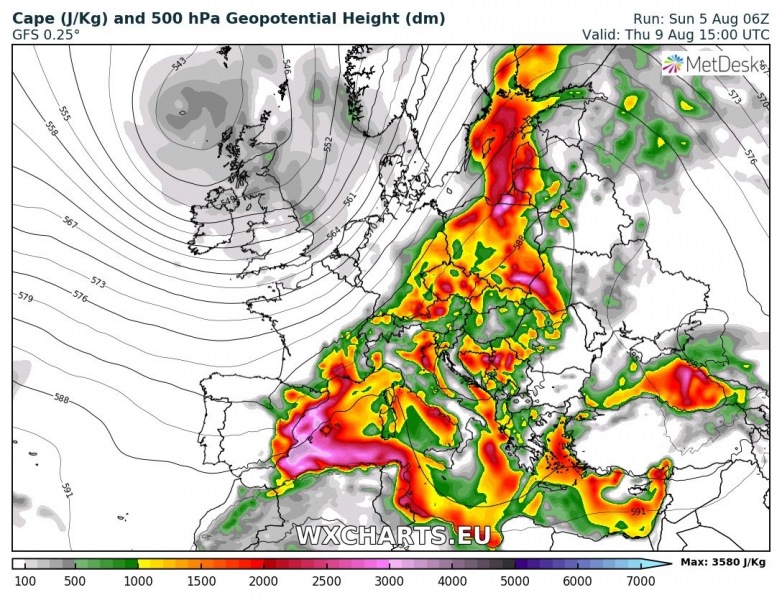 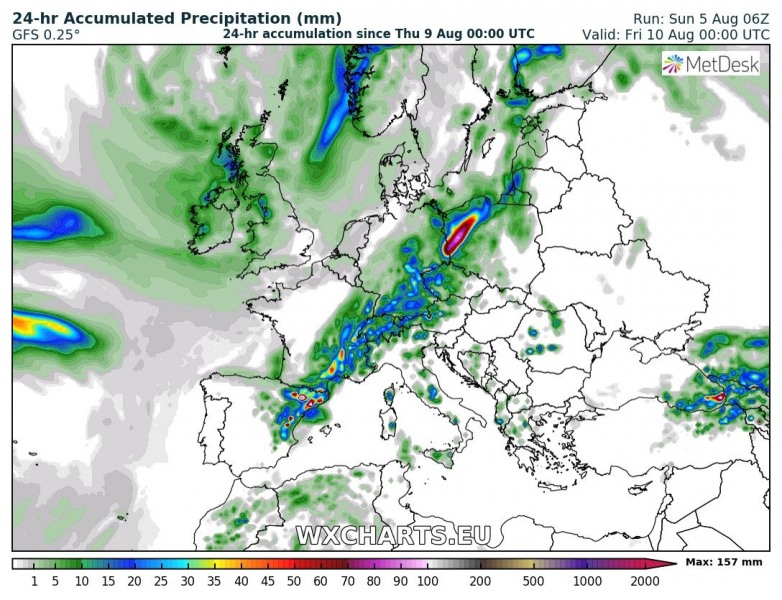 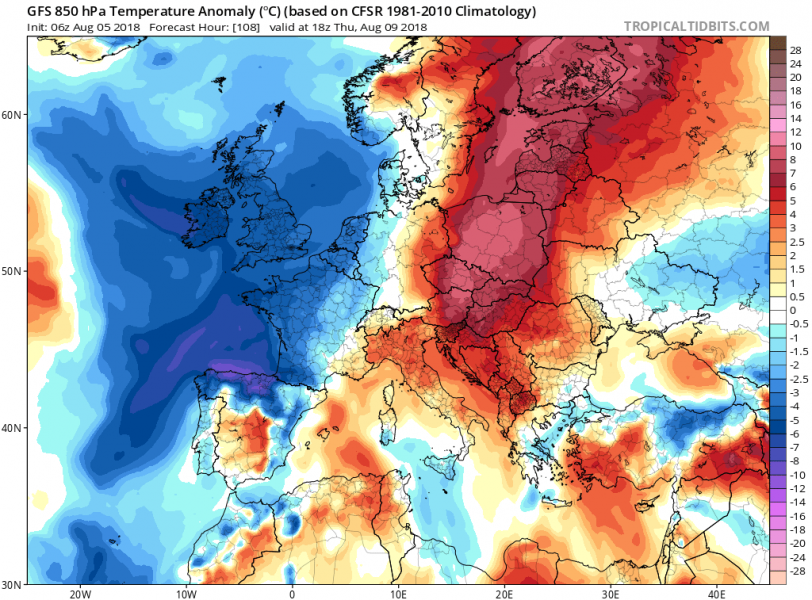 So, an overall pattern this coming week will bring warmer than average period for most of Europe except Irish Isles and Scotland, Iceland and N Scandinavia. 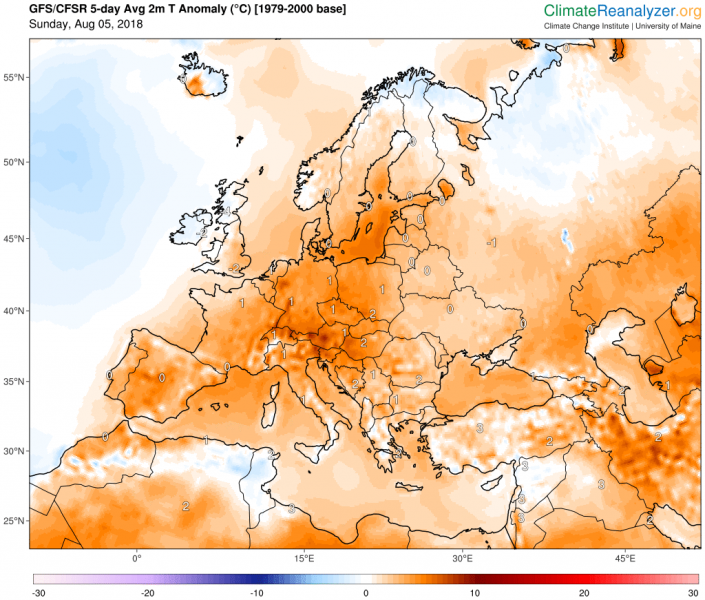 Here is 2 m temperature animation from the GFS model – we can see a strengthening heat wave from SW into central Europe by early into mid week and then cold advection from the western Europe towards the weekend. Southern Europe remains in the heat wave.

Once we approach the weekend, the pattern flattens into more zonal flow across Europe. As this weekend will be the perfect time (Moonless nights) for observing the annual Perseid meteor shower, we will be taking a closer look where to find best clear sky conditions on those days – stay tuned! 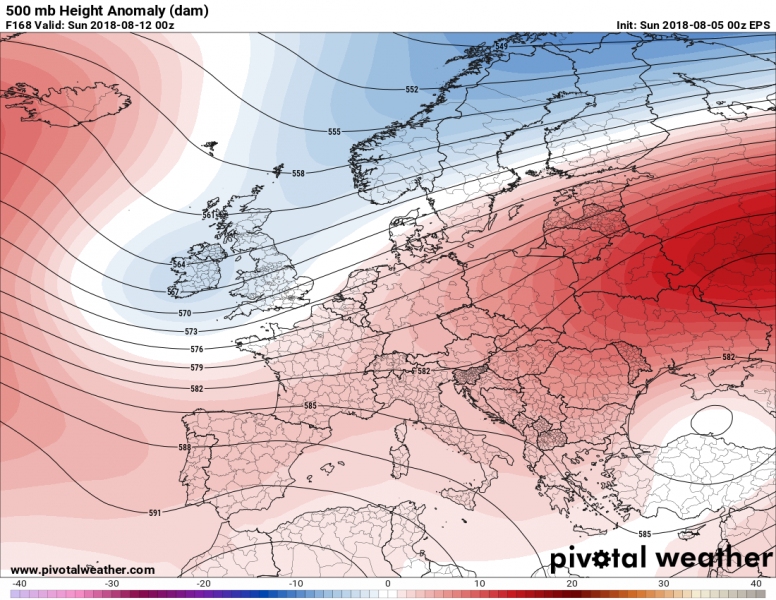