A hot week is ahead for much of Europe. Northern Europe is and will be sweltering under temperatures up to lower 30s, the Iberian peninsula will be gripped in an extreme heat wave with temperatures well above 40 °C. We take a look at various regions across Europe.

This week started with a quite interesting pattern across our continent: a strengthening ridge from SSW Europe expands across central Europe and connects with a powerful upper ridge across N Europe. While very warm weather remains across Fennoscandia and towards the North Pole, much warmer weather is also arriving into central Europe. The heat wave is strengthening. A large upper trough/low over N Atlantic advects maritime airmass into western Europe, so cooler temperatures remain there for now. 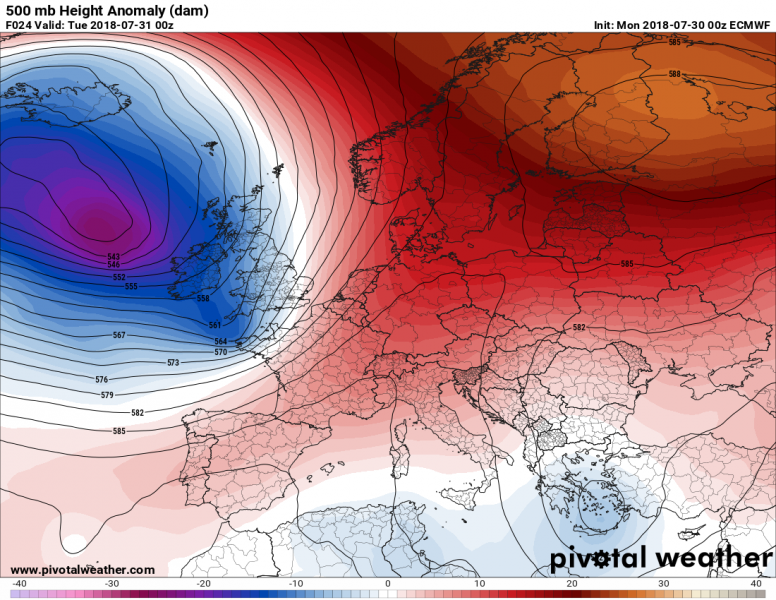 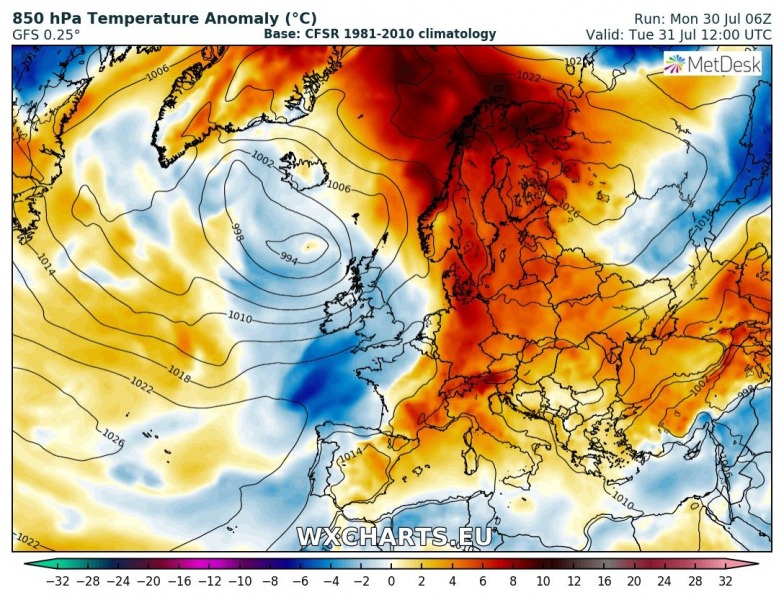 While the ridging pattern is a limiting factor for large scale organized severe weather, the moist boundary layer is resulting in moderate to strong instability, especially across the Balkans, ESE Europe and surrounding areas. Despite the lack of wind shear, widespread convective activity will continue for the whole week in these regions, mostly with multicell clusters and pulse storms. Those will be capable of producing marginally large hail, severe winds and especially intense rainfall with flash floods threat. 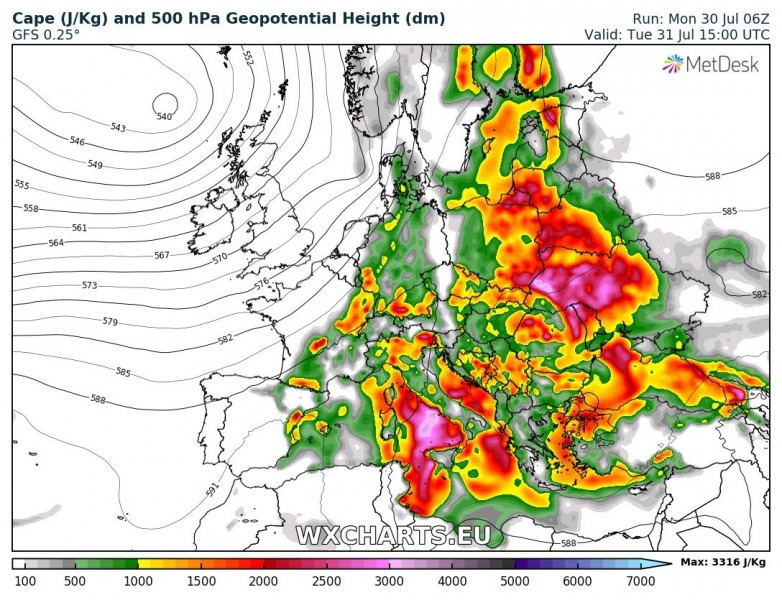 By the middle of this week, a large low over the N Atlantic weakens while it gradually moves north. In response, an Azores high strengthens into SW and W Europe through Thursday, Aug 2nd and starts a period of extremely warm weather for these parts. Europe is now dominated by an extensive upper ridge / blocking pattern. 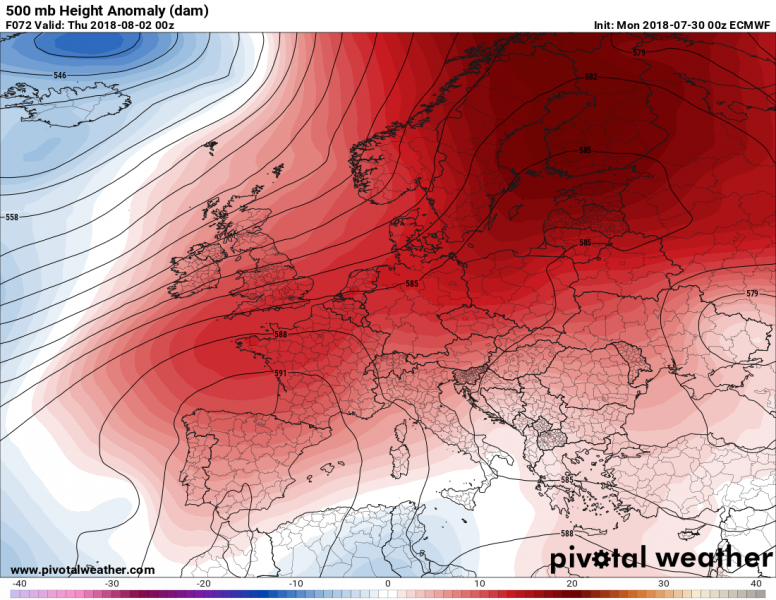 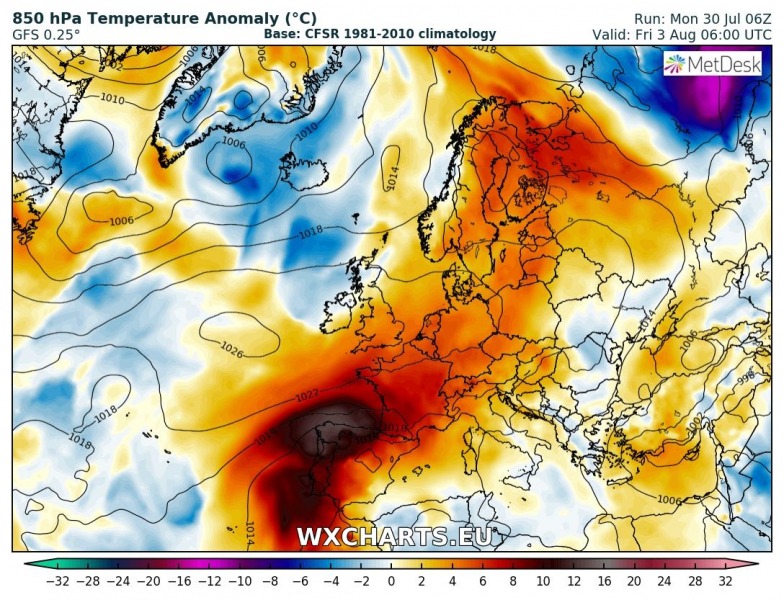 Towards the weekend, extremely significant warm advection takes place across SW Europe, in response to subsidence under a strengthening ridge over western Europe and advection in the lowest levels from the NW Africa. This will result in extremely high mid-level temperatures, ranging from 28-31 °C at the 850mb (1500 m ASL) level which is very rare for Europe! An intense heat wave is expected for Portugal and Spain! 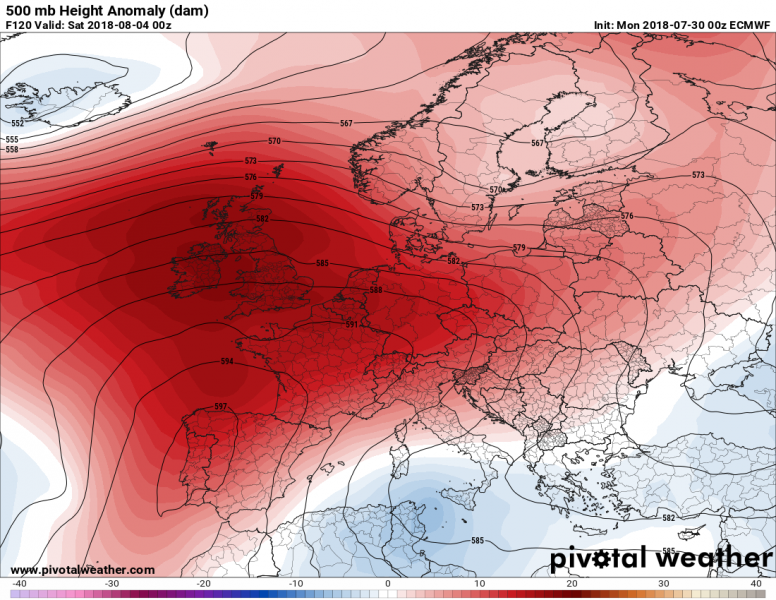 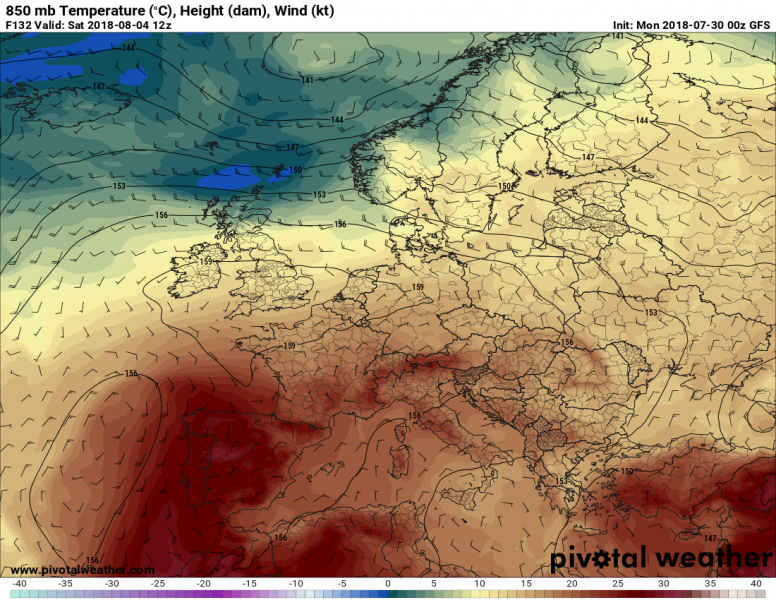 In addition, a more easterly flow will also advect moisture from the Mediterranean further WNW, but again with the lack of upper level winds and shear, large scale severe weather threats will be limited. But it will increase potential for pulse and multicell storms.

Looking at the 2 m temperature anomaly map, most of Europe will be warmer than average through the 2nd half of the week, locally by even more than 10-12 °C (above average). Especially in W Iberian peninsula temperatures will be around 45 °C or even higher, so the temperature anomaly will be even larger! 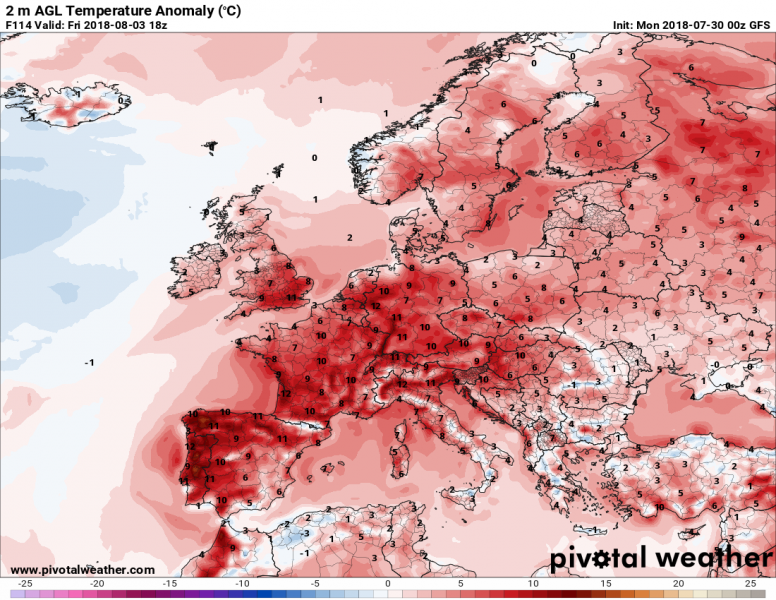 Extreme temperatures are expected for Portugal and Spain from Thursday through Sunday, likely peaking above 4 5°C in the afternoon on some days. Stay alert! 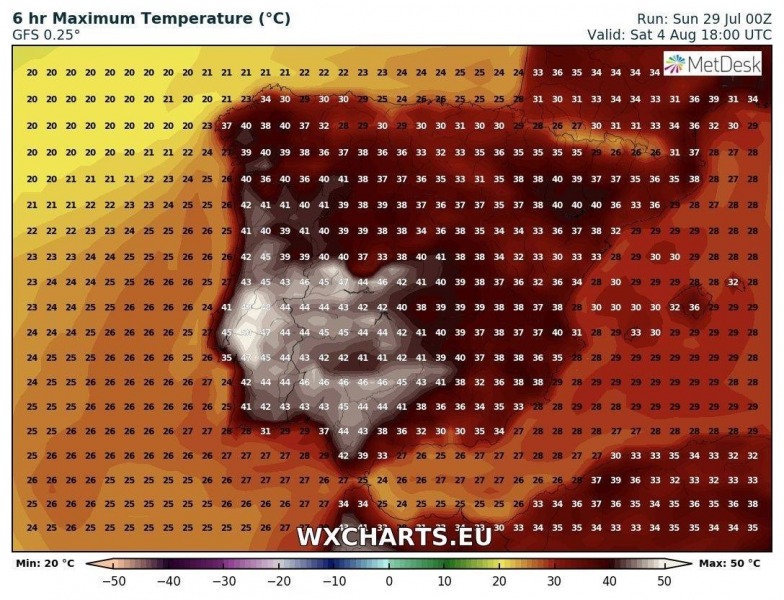 At least some much needed refreshment seems likely for N Europe later this weekend as a deep trough will be pushed in from the N Atlantic on the northern fringe of the collapsing upper ridge. Result would be much colder airmass and days than the past weeks, back to normal or even slightly below normal temperatures for some time. This could also result in some dangerous weather as fronts will push into quite moist and very warm airmass. Organized severe weather is becoming increasingly likely across Fennoscandia after Saturday. We are monitoring the evolution and will be updating later this week. 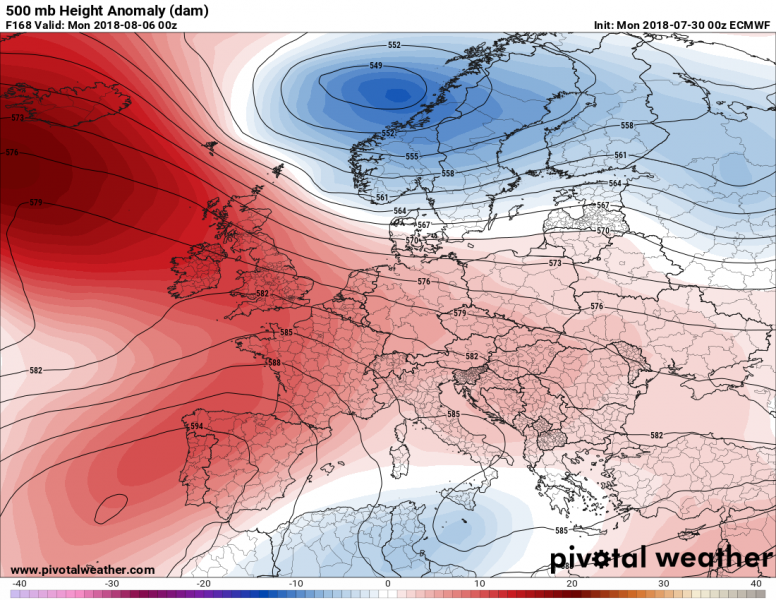 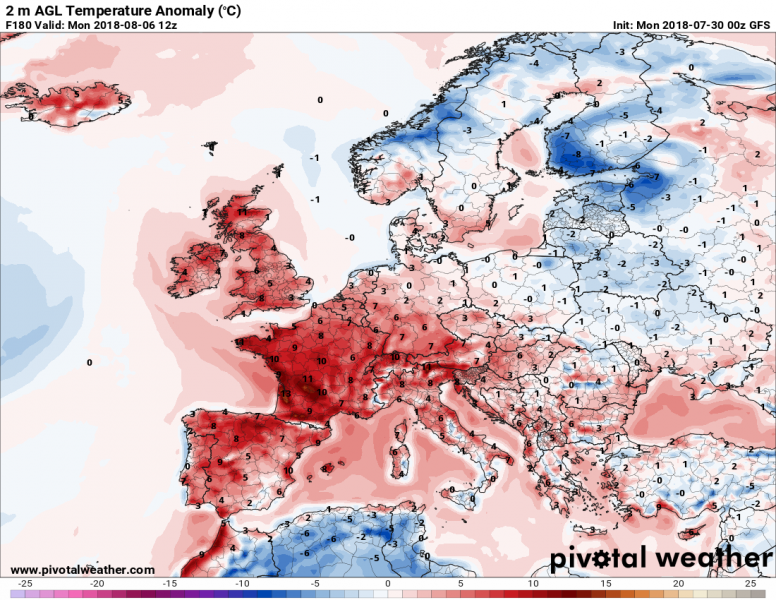 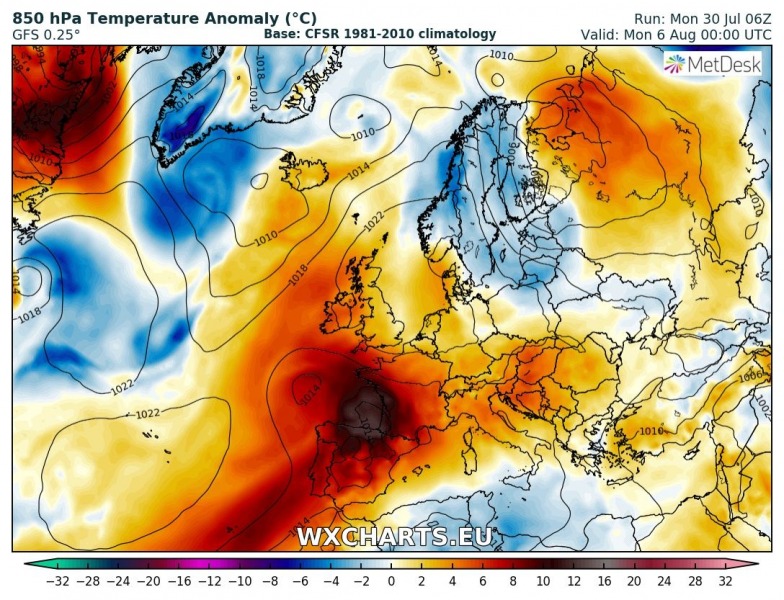 Stay tuned for further updates on the pattern evolution in the coming days.