Mother Nature almost repeats itself late this week, as yet another major winter storm develops across the United States. For the third time in less than 10 days, abundant snow with blizzard conditions will blast across the northern portions of the country, expanding into southern Canada from late Friday into the weekend. A deep low-pressure system ejecting off the Rockies will also bring back very warm and moist air into the Great Plains, resulting in another multi-day severe thunderstorm outbreak this spring, with tornadoes included.

Confidence is growing that a large part of the United States will face yet another textbook spring season weather system, as a new winter storm emerges from the west this Friday into the weekend. Sounds familiar? Indeed, this is pretty much similar to the event just about a week ago when an intense storm brought both winter and spring season havoc for millions across the country.

We will do it once again this weekend.

The system will develop another major snowstorm for the northern High Plains, with locally very heavy snow accompanied by strong winds, bringing back blizzard conditions, road closures, and extreme cold to follow behind it later on.

On the southern side of the deep surface low, a classic severe thunderstorms outbreak is forecast across the Great Plains into Midwest. A multi-day event with strong storms, large hail, severe winds, and also tornadoes are expected, with the majority of widespread activity on Saturday and Sunday.

Note that the recent severe weather event brought tens of tornadoes from Texas to Iowa and Minnesota on the north to Kentucky to the east. Including those strong tornadoes in Texas, Iowa, and Minnesota last week.

As is often the case in the spring season weather systems, the amplified jet-stream pattern across North America lead to severe frontal systems that bring both snow and thunderstorm threat across the continent. So the actual effects of the upcoming late-season winter storm will be very large, covering most of the central and northern U.S., from the deep southern states far north across the Midwest to the International border and southern Canada.

When a winter storm becomes so large and the low-pressure systems deepen a lot, the advection of much colder weather from Canada into the United States is stronger than what typically occurs during the spring season months. Robust winter weather will bring cold season memories back for the northern states this weekend, as forecast snow followed by very low temperatures is to be verified. Snow will be very heavy at times, combined with strong to severe winds and a blizzard in the low’s wake as large pressure differences will establish.

The video animation above is revealing the sequence of the developing weather pattern with a new deep surface low grazing across the nation over the weekend. The system intensifies as soon as the upper wave emerges into the Rockies on Friday, moving into the Great Plains on Saturday and Sunday. A combination of severe thunderstorms on one side and heavy snow with blizzards on the other will affect millions along the frontal system’s track.

Winter storm watches have already been issued for Montana and Dakotas ahead of the system, with large cities involved as well. Including the Minot, North Dakota which experienced a tremendous amount of snow in the recent historic winter storm. About 46 inches of snowpack this April have buried Minot, making it a record-breaking month after 35 inches set back in 1970. Minot’s seasonal total is around 75 inches, more than 50% above the normal winter season.

With the upcoming accumulation of around 15-30 inches in some areas, these totals will quickly get higher by the time the system departures on Sunday. The forecast 1-3 feet of fresh snow will get roads and towns buried again, as strong winds will result in huge drifts. A similar is likely across southern Saskatchewan, Canada as well again.

Let’s dig into some more details on the developing weather system.

ANOTHER WINTER STORM WITH MAJOR SNOW AND BLIZZARD FOR THE NORTHERN U.S.

Yet another deep upper low emerges into the western United States on Friday, crossing the Rockies and emerges into the Great Plains before turning towards southern Canada for the weekend. This is a typical weather setup that normally leads to the development of the cold season like weather on the colder side of the winter storm. On the warmer side of the surface low-pressure system, robust severe thunderstorms will develop.

Once the upper wave moves over the Rocky Mountains, the surface pressure deepens as cold upper levels dig south. The system becomes quite large, in response to a battle of very warm air from the south and much colder air plunging south from Canada in its wake.

The chart above is revealing this classic spring season weather pattern across the United States. Highlighting a very deep upper-level low, rounded by a strong pressure gradient to its south and east. This will develop powerful jet stream winds grazing through the sky where the gradient is the most intense.

Snow will begin for the northwestern states from Friday morning onwards as conditions begin rapidly worsening with the deep upper wave coming up from the Pacific Northwest towards the western U.S. Surface pressure falls across the northern Rockies.

Snowfall will become heavier into Saturday as the system strengthens and moves towards the northern Plains. The heaviest snow is forecast from Montana and Wyoming into western Dakotas and southern Canada late Saturday into Sunday morning.

As snow also comes with strongly enhanced winds, widespread blowing snow and blizzard conditions will develop in these areas. Significantly reduced, near-zero visibility will be affecting travels along the interstates I-80 and I-90 from Friday afternoon through Sunday, as abundant snow and snowdrifts are very likely to result once again. Attached below is the sequence of the frontal system progress over the weekend.

Very heavy snowfall will gradually take place along the northern side of the developing winter storm as it tracks into the Midwest over the weekend. A swath of particularly heavy and excessive deep snow will develop from eastern Montana into western South and North Dakota from Saturday into early Sunday, nearly repeating the similar record-breaking event from last week.

Strong pressure difference will increase the winds with time, worsening conditions with heavy blowing snow and developing blizzards and near-zero visibility. Roads could be impassable again in many areas.

A lot of snow is forecast to accumulate again, especially from the northern High Plains into the western Dakotas, with huge snowdrifts, and whiteout conditions. The highest amounts of snow are likely from eastern Montana across South and North Dakota to southern Saskatchewan and Manitoba. Some areas could again face up to 2 feet or even more snow where best conditions for very heavy precipitation will meet together.

Note that the northern side of the slow-moving intense winter storm usually brings the near-ideal conditions for very heavy snowfall and highest ground accumulations.

MORE SEVERE THUNDERSTORMS AND TORNADOES FOR THE PLAINS AND MIDWEST

A rather typical occurrence with the spring season winter storm is the increased potential for severe weather on its southern side. With huge temperature contrast, there is an increasing potential for a multi-day severe thunderstorm outbreak across the central U.S. The first round of severe thunderstorms will likely develop across Kansas, Nebraska, and South Dakota on Friday where storms could bring large hail, severe winds, and a few tornadoes. 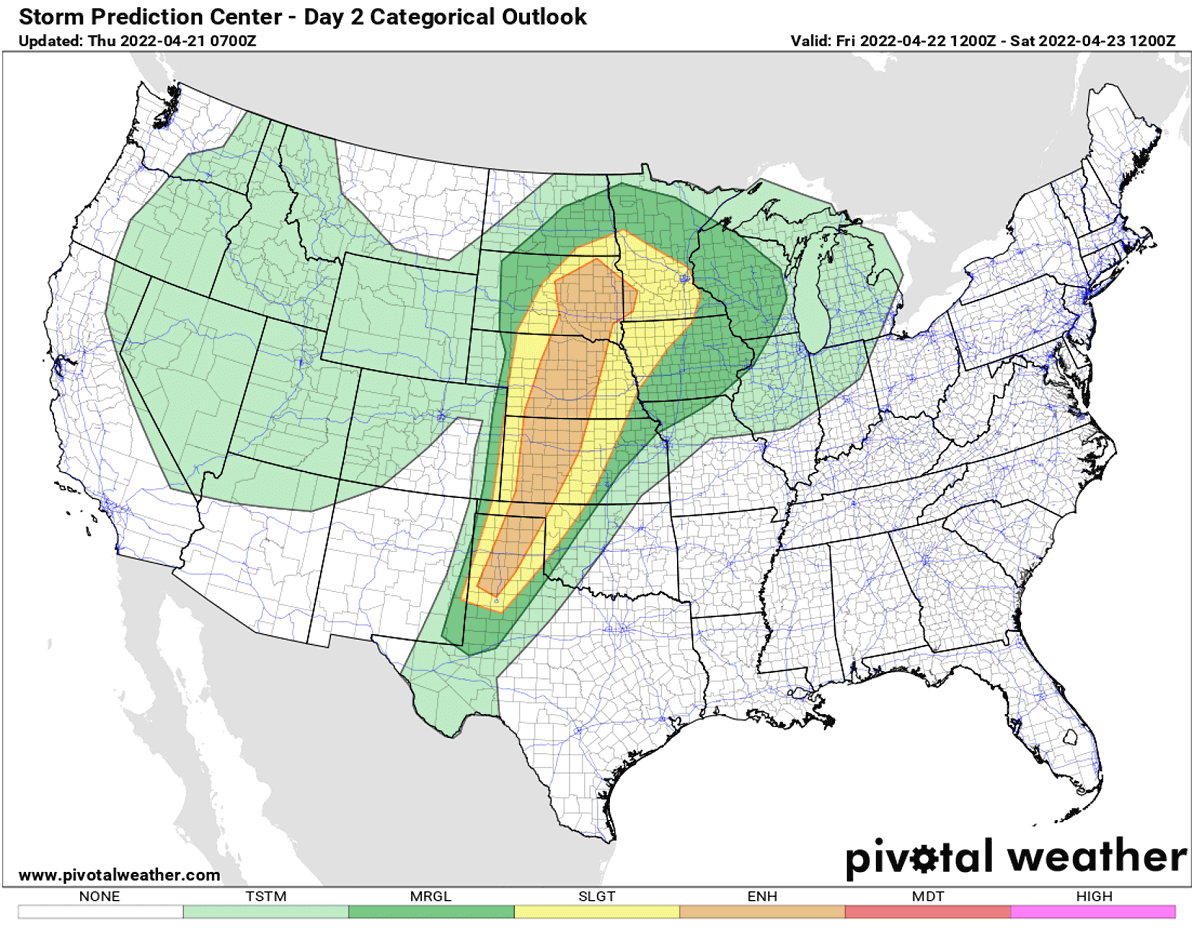 The day after, on Saturday, a more robust severe thunderstorm conditions are forecast to develop as the surface low will be deep while traveling across the northern Plains. This will result in a major return of significantly moist and warmer air mass far north of the Gulf of Mexico under the powerful jet stream aloft. Therefore, severe thunderstorms will become more widespread from Saturday afternoon into Sunday morning along the front from Minnesota to Oklahoma.

Thunderstorms with higher potential for tornadoes, even strong ones, severe damaging winds, and large to very hail with local flooding will be possible from the late afternoon into the Saturday night hours. Areas across Oklahoma to Iowa and Minnesota will be in the highest threat of the most robust severe storms, gradually spreading east through the night hours as the front advances further.

The high low-level moisture return northward ahead of the surface front will develop more widespread storms, as the environment will become strongly unstable under a very powerful jet stream aloft.

On Sunday, when the parent low-pressure system moves into Upper Midwest, the cold front will develop more severe thunderstorms from the western Ohio Valley across central Missisippi Valley towards Texas. Again with robust severe weather potential.

The thunderstorms are forecast from central Mississippi Valley to central Texas on Sunday. With the highest threat for local flooding, a large complex of storms will develop along the slowly advancing front.

Through Sunday night, activity will gradually diminish as instability vanishes father into the Southeast United States towards Monday morning. The moving and weakening cold front is unlikely to bring significant weather to these states this time. However, some stronger thunderstorms could still form with the highest threat of flooding.

MORE COLD WEATHER FOLLOWS BEHIND THE WINTER STORM FOR THE NORTH

The deep surface low-pressure system matures on Saturday as it moves over the northern United States, but it remains very intense over the weekend while it continues east-northeast. It will be parked over Dakotas, the Upper Midwest, and southern Canada until Saturday, with its central pressure in the upper low to mid 980s. As we could easily judge by the tight isobars, winds will remain very strong across the whole northern U.S.

The strongest winds will be in the system’s wake, thanks to a strong pressure difference between the High over Arctic Canada and our Low. Thus, the strong winds and intense surface low will pull a much colder air from the Canadian prairies south towards the northern United States.

First, the most severe cold is the forecast to spread into eastern Montana and Wyoming on Saturday, gradually spreading into western North and South Dakota.

A return of the cold weather with very low temperatures for the spring season should gradually expand farther east-southeast over the weekend, overspreading Dakotas and Nebraska, reaching Minnesota and Iowa on Sunday.

We can also see how the strong jet stream on the front end of the upper wave brings much warmer weather across the central and eastern half of the U.S. at the same time.

Once the deep low finally begins losing its strength Sunday night into Monday and moves farther northeast towards south Manitoba and Ontario, the cold advances across the rest of the Upper Midwest. Monday will be extremely cold for eastern Dakotas, Minnesota, and Iowa with temperatures around 20-30 °F below normal for late April. Making the lowest temperatures into single digits in some areas.

Tuesday should bring the widespread cold also across the Great Lakes as the Low moves further east across southern Ontario. So the cold pool has a clear path to spread east, despite gradually losing its intensity due to diminishing pressure difference and winds.

As we can see, the cold pool will gradually continue east and south towards the East Coast and Northeast U.S. through mid-next week. There’s some potential it will extend well into the second half of the week as another, secondary low develops along the Atlantic coast and stalls for a couple of days. Bringing some more snow for the Northeast U.S. and New England, as well as far southeast Canada up to the next weekend.

Images used in this article were provided by Windy, Wxcharts, and Pivotalweather.