The 8.2 magnitude earthquake struck off the Alaskan coast, about 55 miles (90 km) southeast of the city of Perryville, Alaska. Coastal areas of southern Alaska are under tsunami warnings.

Tsunami alerts have been issued for southern parts of Alaska, the volcanic peninsula itself, and also for the Pacific coastal areas from the Hinchinbrook entrance to the Unimak pass.

Tsunami Warning in effect for:

Tsunami Advisory in Effect for:

There have been at least three strong aftershocks, including the quakes with the magnitudes 6.2, 5.9, and 5.6, following 15-20 min after the main earthquake.

The epicenter was about 800 km (500 miles) away from Anchorage, Alaska’s biggest city. There was no tsunami threat to Anchorage. 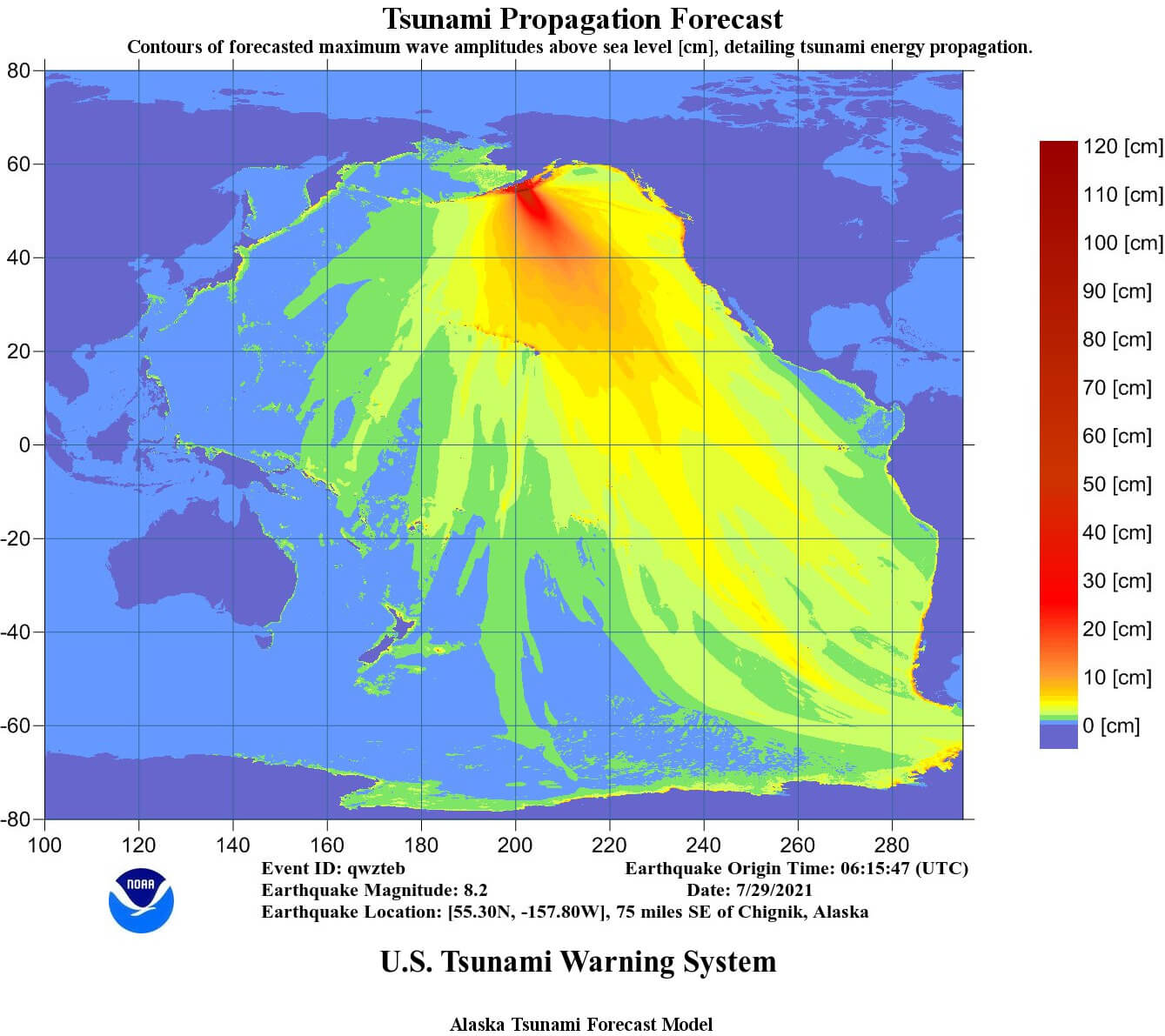 The Pacific Tsunami Warning Center (PTWC) said it had canceled warnings of possible tsunami threats issued to Hawaii and the U.S. Pacific territory of Guam.

There have been at least 13 earthquakes recorded around the world in the past 24 hours.

The recent strongest earthquakes are the following:

Today’s earthquake southeast of Perryville, Alaska, occurred as the result of thrust faulting on or near the subduction zone interface between the Pacific and North America plates. The preliminary focal mechanism solution indicates rupture occurred on a fault dipping either shallowly to the northwest, or steeply to the southeast.

The so-called Aleutian arc extends approximately 3.000 km from the Gulf of Alaska in the east to the Kamchatka Peninsula in the west and is a favorable area for numerous earthquakes in the past, including very powerful ones in the last century. The map below is showing this arc with all the earthquakes since 1900.

The location, mechanism, and depth – and the large size of the event – are all consistent with slip occurring on the subduction zone interface between the two plates. At the location of this event, the Pacific plate converges with North America to the northwest at a rate of about 64 mm/yr, subducting at the Alaska-Aleutians trench about 125 km to the southeast of the earthquake.

Note, that large earthquakes are common in the Alaska-Aleutian subduction zone. Since 1900, 8 other earthquakes of magnitude 7.0 and larger have occurred within 250 km of the today’s event. Here are the major quake events in the nearly areas:

All of these past earthquakes occurred within the 200 km radius around today’s M8.2 earthquake.

Above: Potential tsunami travel times across the Pacific Ocean.

The Alaska-Aleutian Trench also hosted the second-largest earthquake recorded by modern seismic instrumentation. On March 27th, 1964, a magnitude 9.2 earthquake, which ruptured to within about 250 km of the July 29th event, at the eastern end of the 1938 rupture area.

The 1938 event produced a small tsunami that was recorded both locally and in Hilo, Hawaii. The remote location of the earthquake resulted in little impact on people and infrastructure.

*** This is breaking news and details will be adjusted as more information is available.