The coldest weather in months arrives for the Northeast U.S., affecting Thanksgiving week travels for many on the road through Friday. Then, a major winter storm spreading from Canada towards the Great Lakes and Northeast will dump a good amount of (lake-effect) snow and develop a blizzard over the weekend.

A deep wave has emerged into the Northeast U.S. from Canada this Monday into Tuesday, delivering colder weather into the region. Lake-effect snow is underway into areas downwind of Lake Superior and Lake Michigan and continues into Tuesday. 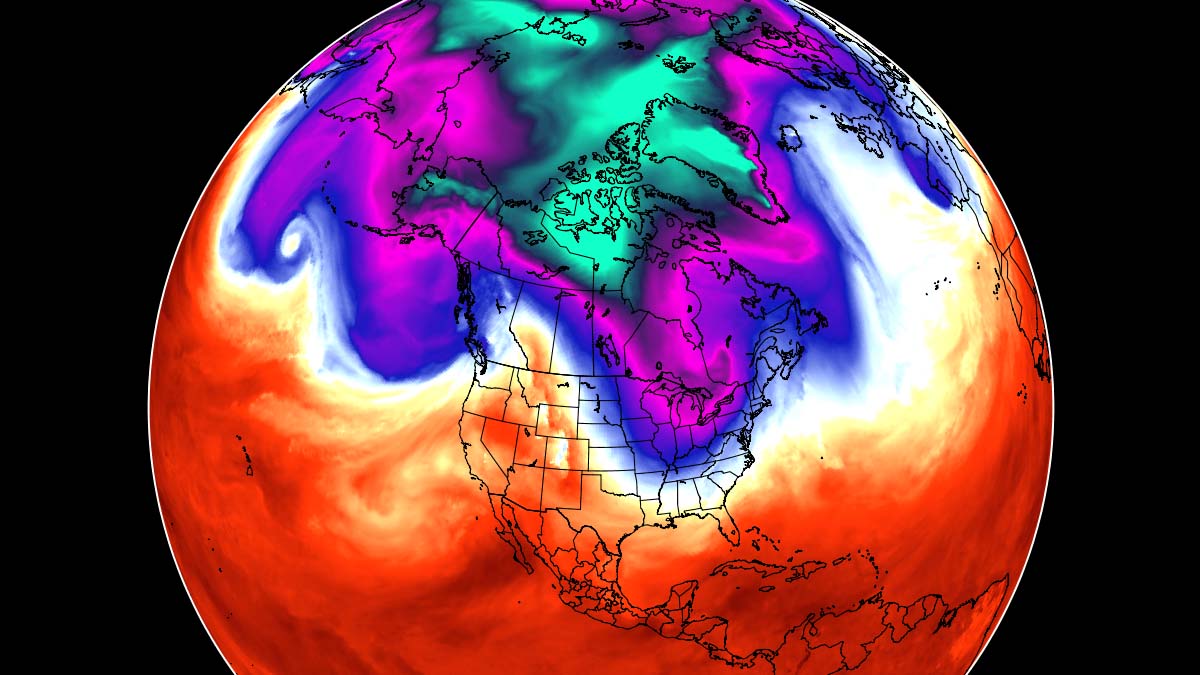 The cold overspreading the still well-above average lakes temperatures develop a near-ideal recipe for locally quite intense snow squalls on the southeast shores of the lakes. Significant accumulations are possible, affecting early Thanksgiving travels until Wednesday.

As it often happens during the late fall months, the intense intrusion of much colder air from Canada results in wild wintry storms for the Northeast region. Much colder temperatures will also spread across the East Coast and Mid-Atlantic states this week.

Then, after Thanksgiving Day, another, potentially a major winter storm is becoming increasingly likely for portions of the Northeast with potentially an intense lake-effect snow blast across the Great Lakes, sending snow squalls with high snow accumulations ashore.

Strong winds, heavy snow with blizzard conditions will be possible on Friday into Saturday, with more December-like cold for the region. Much colder weather will spread across the East Coast, Southeast reaching Florida after Thanksgiving, precisely over the weekend.

A classic dipole weather pattern has been established over the CONUS this Monday, with a strong upper ridge (High) on the West and a deep trough to the east. While pretty stable and quite warm November weather will be for those on the west, Thanksgiving week travel into the Northeast U.S. will bring some disruptions and potentially dangerous driving conditions farther east.

It will be, however, pretty warm weather across the Great Plains and Midwest through Tuesday, with cold arriving from Canada on late Wednesday as well. Mild conditions will bring enjoyable travels in this part of the country. Nearly 20 °F above normal temperatures are likely along the northern High Plains on Tuesday.

To the east of this upper High ridge pattern, a deep low will spread across the whole Northeast U.S., as well as into the Mid-Atlantic and East Coast. Temperatures will be above 10-15 °F lower than normal on both Tuesday and Wednesday. 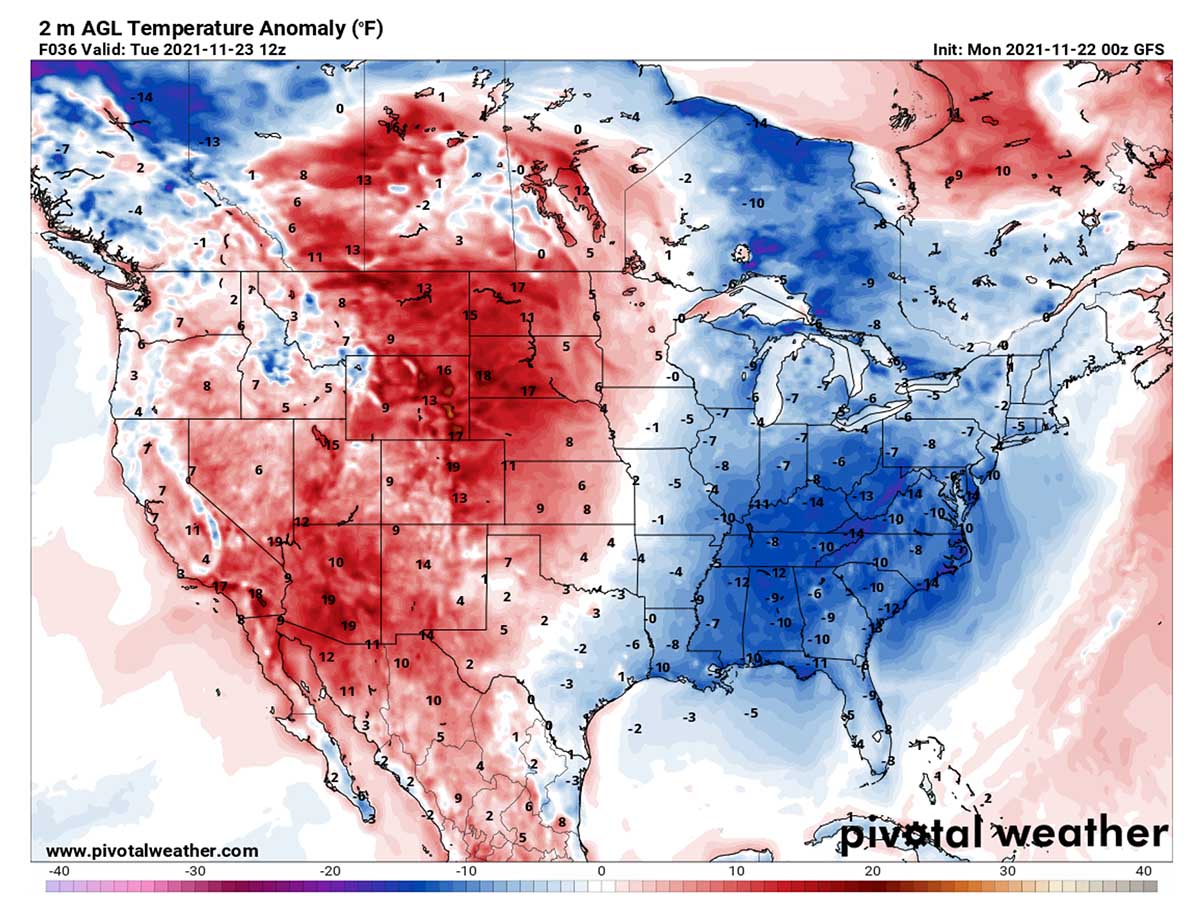 Farther west, much of the Contiguous U.S., with exception across the West Coast and Pacific Northwest, will experience well-above normal temperatures through Wednesday morning.

Changes will begin through Tuesday night into Wednesday as the low-pressure system will be shaping up under a strong wave aloft, emerging into northern Plains from Arctic Canada. Temperatures will be gradually cooling down from north to south. Some snow will be possible from Montana and Wyoming to Dakotas.

Wednesday will be the coldest day across the eastern U.S. with this wave, with temperatures plunging below freezing from the Ohio Valley to the East Coast, including northern Georgia and Carolinas. With the coldest temperatures across the Northeast.

The morning lows are likely to plummet into the low 20s in places, locally even a tad lower.

Once the low across the northern Plains moves towards the Great Lakes into Thanksgiving Day, it begins deepening in response to a strengthening emerging upper wave from Canada. This wave will continue east-southeast into Friday, becoming very deep while moving across Northeast U.S. on Friday.

To its west, the upper High strengthens again, helping to deliver more cold from Canada towards the eastern portions of the country. A recipe for the major winter storm development comes into place. The arrival of the strong cold front farther south into the Southeast U.S. and East Coast will bring much lower temperatures, potentially more than 20 degrees F below normal for late November in these areas. 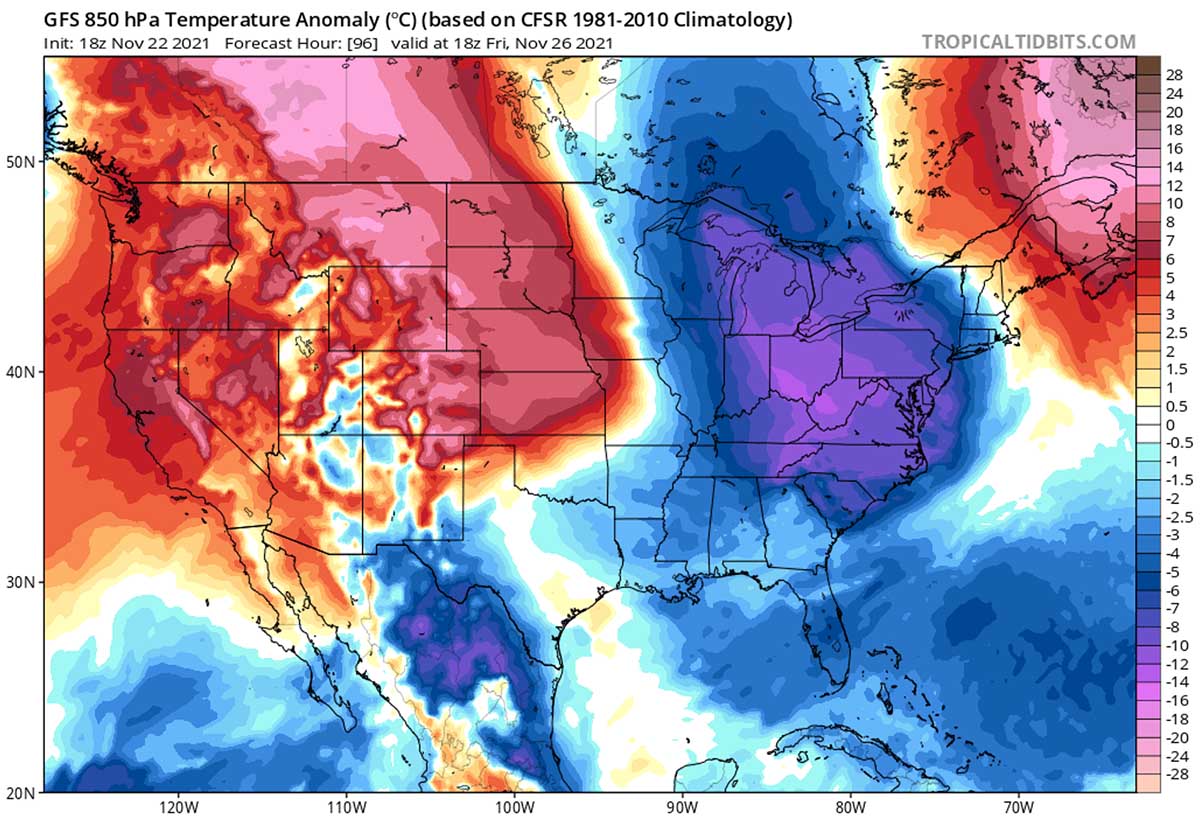 The strongest cold for the East will develop on Saturday. The East Coast, Southeast U.S., as well as part of the Gulf Coast should see temperatures about 10-15 °F below the average for this time. A chilly day in much of Florida as well, with winds worsening those conditions.

Notice how, on the contrary, will be the warmth across the Northern Plains (Dakotas) once again. Nearly 20 °F above normal near the surface. Thanks to the dry layers coming down from the High Plains and Rockies.

On Friday, the surface low deepens considerably over the Great Lakes, continues with more rapid deepening as we head into the next weekend. A major winter storm is forecast to develop across the Northeast.

How intense the snowfall will develop strongly depends on the storm’s track, but it seems the low will be pretty deep. And so will be the winds, and temperatures becoming pretty cold. How much snow could accumulate along the system is still rather undefined, although many areas could expect quite some over the weekend.

Through Friday night, the winter storm will gradually intensify while moving further northeast towards southeast Canada on Saturday. The most intense snowfall will likely spread across northern Vermont, New Hampshire into Maine, more into Canadian Ontario and New Brunswick.

Snow could be heavy at times, so significant wintry conditions are expected. Especially as deep low will also contribute to the strengthening winds, blizzard conditions are likely as well. Travel disruptions and delays can be expected.

Much colder temperatures will again spread over the warmer water of the Great Lakes, creating a textbook intense lake-effect snowfall along the southeast shores of Lake Superior and Lake Erie. Strong west-northwesterly winds will deposit snow squalls into the classic spots with significant amounts well possible.

With nearly 56 °F of surface water temperature across the eastern portions of Lake Erie, plenty of moisture is in place to supply the convective snow squalls. Lake Superior has just a tad lower temperatures, so both should help to develop intense snowfall along their southeast shores.

Strong winds will combine with heavy snow, becoming drier as cold air mass progresses further south across the lakes, blizzard conditions will develop. Travels across these areas, e.g. from Erie to Buffalo and Syracuse, NY could be significantly disrupted. Whiteout conditions and snowdrifts will be quite possible.

Potentially a foot or even more of fresh snow could accumulate downwind from the lakes through Sunday.

***Images in this article are provided by Windy, Pivotal Weather and TropicalTidbits.