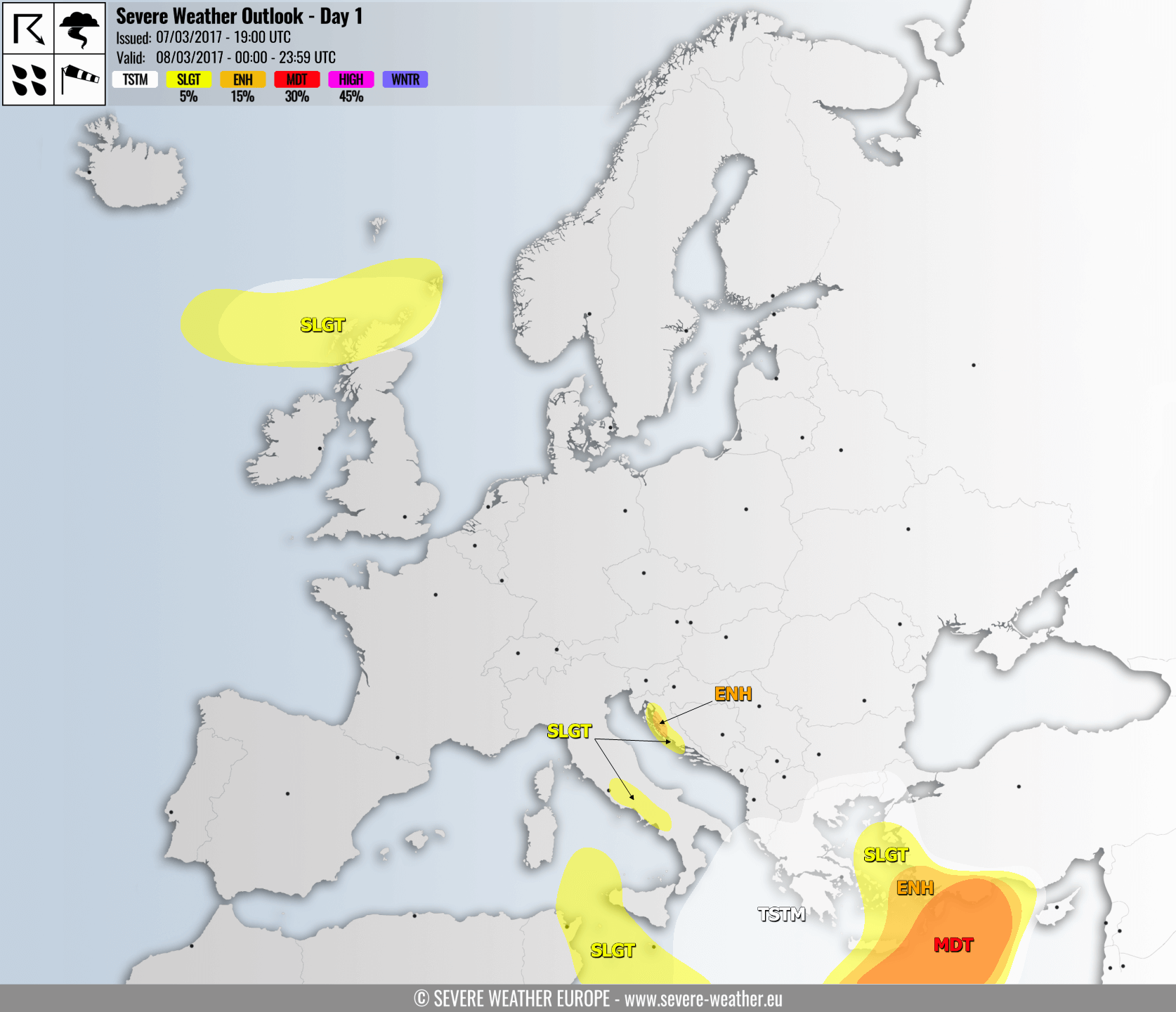 A large and very cold upper low will be the focus for today’s severe weather activity, centered over southern Mediterranean. A strenghtening ridge over W Europe gradually spreads east towards central Europe and merges with the Russian high, developing a Rex block. Another cyclone travels N of British Isles with a short wave trough moving across Scotland.

A MDT risk has been issued for parts of SE Mediterranean across E Crete into SW Turkey with threat for large to very large hail, severe damaging winds, torrential rainfall and tornadoes. A moderately but strongly sheared warm sector established ahead of the main cold front, providing environment conductive for explosive storm development. Strong LL shear and helicity are supportive of strong tornado, especially along the SW coast of Turkey where those will be maximized. Persistent strong SSW flow will result in excessive rainfall across complex terrain of SSW Turkey.

ENH/SLGT risks have been issued surrounding the MDT risk area, including the rest of Crete and Aegean sea, where severe storms with threat for severe winds, large hail, torrential rainfall and lesser extent for tornadoes are expected, but with less coverage. Once the cold front is over, very cold mid levels will overspread the area and scattered storms with main threat for waterspouts will form.

A SLGT/TSTM risks have been issued for northern British Isles with threat for severe winds and marginally large hail within some isolated storms that could occur.

ENH/SLGT risks have been issued for parts of E Adriatic coastal areas (Kvarner area and Northern Dalmatia) with threat for non-convective downslope winds, peak wind gusts in excess of 140 km/h are possible.

A SLGT risk has been issued for parts of central Italy with threat for non-convective downslope winds, peak wind gusts could reach near 100 km/h.

A SLGT risk has been issued for areas from S Tyrrhenian sea southwards between W Sicily and E Tunisia, including Malta, with threat for non-convective severe winds, peak gusts in excess of 100 km/h are locally possible.

A TSTM risk has been isssued for S Balkan countries and the rest of SE Mediterranean where convection will be forming under an influence of very cold upper low rotating above. Very cold airmass could trigger storms with waterspouts band graupel showers.

Follow the severe weather in risk areas with radar:

Or follow the severe weather evolution with satellite imagery: