The ongoing weather pattern across Europe is currently still under the pressure of a large upper-level low that brought a significantly cooler air mass into central Europe, the Mediterranean, and the Balkan peninsula in the recent days. While the low will gradually diminish from now on, the general dynamics across the Atlantic and European continent are hinting at what’s coming up for the mid-October period. Another strong cold period is forecast for Europe.

What we will see in the discussion below is the start of the interesting pattern change for much of the European continent, thanks to a strong upper High developing across western Europe and North Atlantic. Normally this means the flow turns more northerly, bringing colder air mass far towards the south. 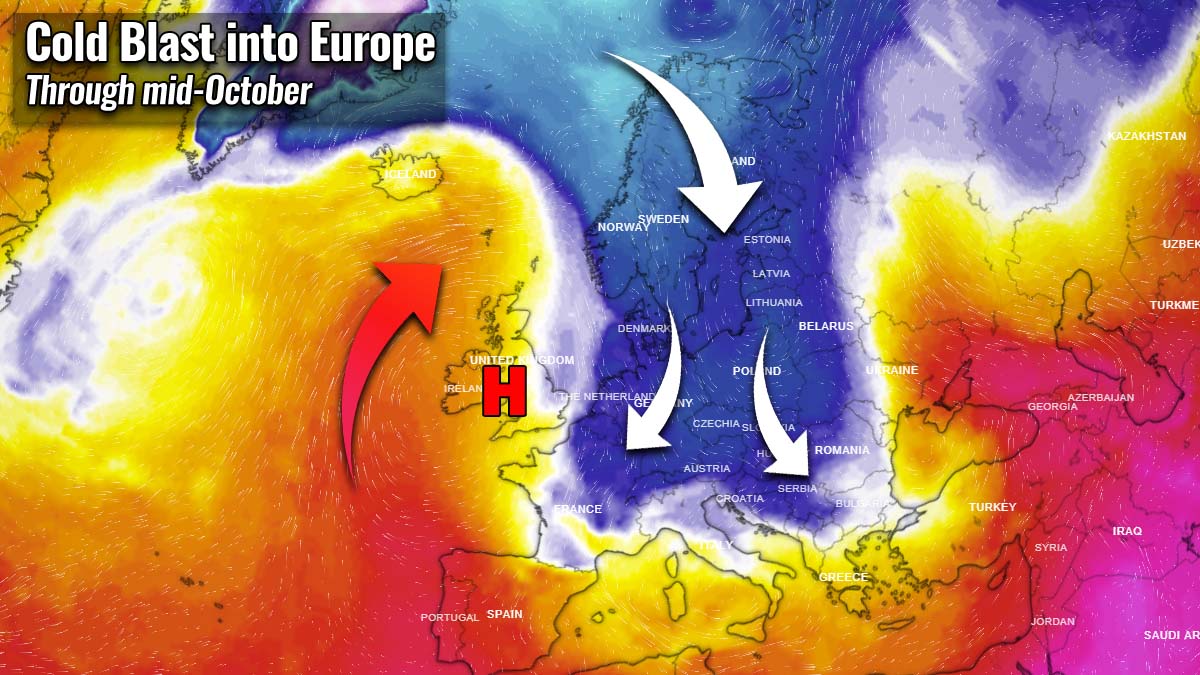 Attached below is the video animation of the progress of these more progressive dynamics for continental Europe. A huge pool of much colder than normal air mass is forecast to spread far south across central Europe into the Mediterranean, even reaching North Africa late this week.

The next 5-7 days, possibly even up to 10 days, will see pretty cold October weather which should additionally lower the monthly average temperatures in this part of the continent.

Let’s see how the cold blast will take its steps over Europe this week.

HUGE EXTRATROPICAL LOW OVER THE ATLANTIC, UPPER LOW IN THE MEDITERRANEAN

It is quite an impressive look over the satellite imagery across Europe and the North Atlantic this Sunday. Over the North Atlantic, a very large extratropical low has build-up, with a well-defined baroclinic zone and warm air mass advection to its east. Farther east, over western-southwestern Europe, an upper-level ridge (High) is developing, gradually expanding towards the north.

Areas to the east remain under the gun of the large and persistent upper-level low that has been ongoing across the northern Mediterranean and the Balkan peninsula for several days. The result was a lot of rain and even tornadoes in Italy, while the highest parts of western Balkans have seen their first snowfall as well.

The weather has been pretty cold, combined with hurricane-force downslope Bora winds along the eastern Adriatic coast. Winds were exceeding 150 km/h in some places. While the low is finally in a gradual weakening phase, its southern parts remain active with strong convective activity over the Ionian Sea. 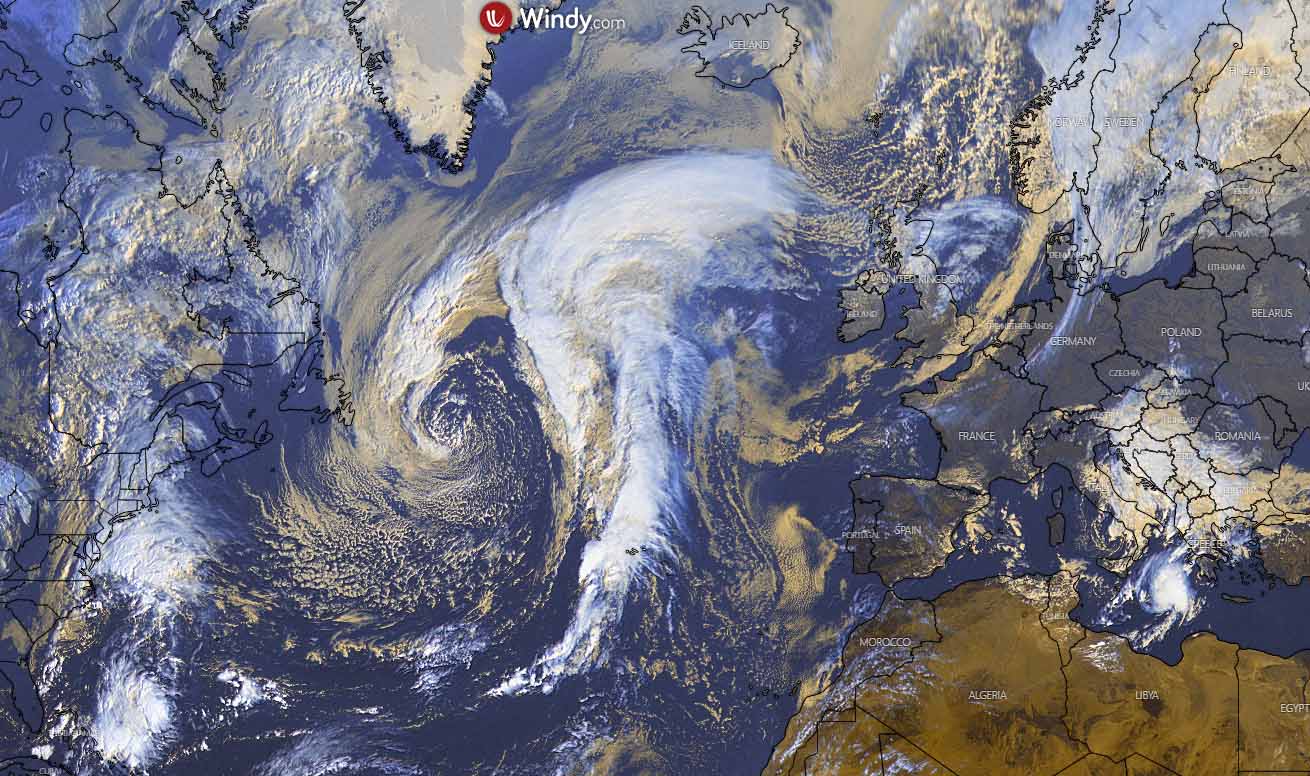 The visible satellite image above reveals this low pretty well, while we can see only some low stratus cloud over western and southwestern Europe as normally happens under the stable upper Highs. But take a look over the Atlantic, that’s our game changer coming up. It will help to establish a pretty powerful upper ridge into western Europe that will extend the cold across continental Europe through mid-October.

The low is actually pretty large if we compare its size with the size of Europe. This hints the advection of much warmer air mass to its east is quite large, and so will be the cold blast to its east.

As the new week starts, the upper-level ridge over western-southwestern Europe will begin strengthening in response to the further advection of warm air mass coming up with the extratropical low to the west. To the east of this feature, a large upper wave and the Balkan’s upper low remain in place. 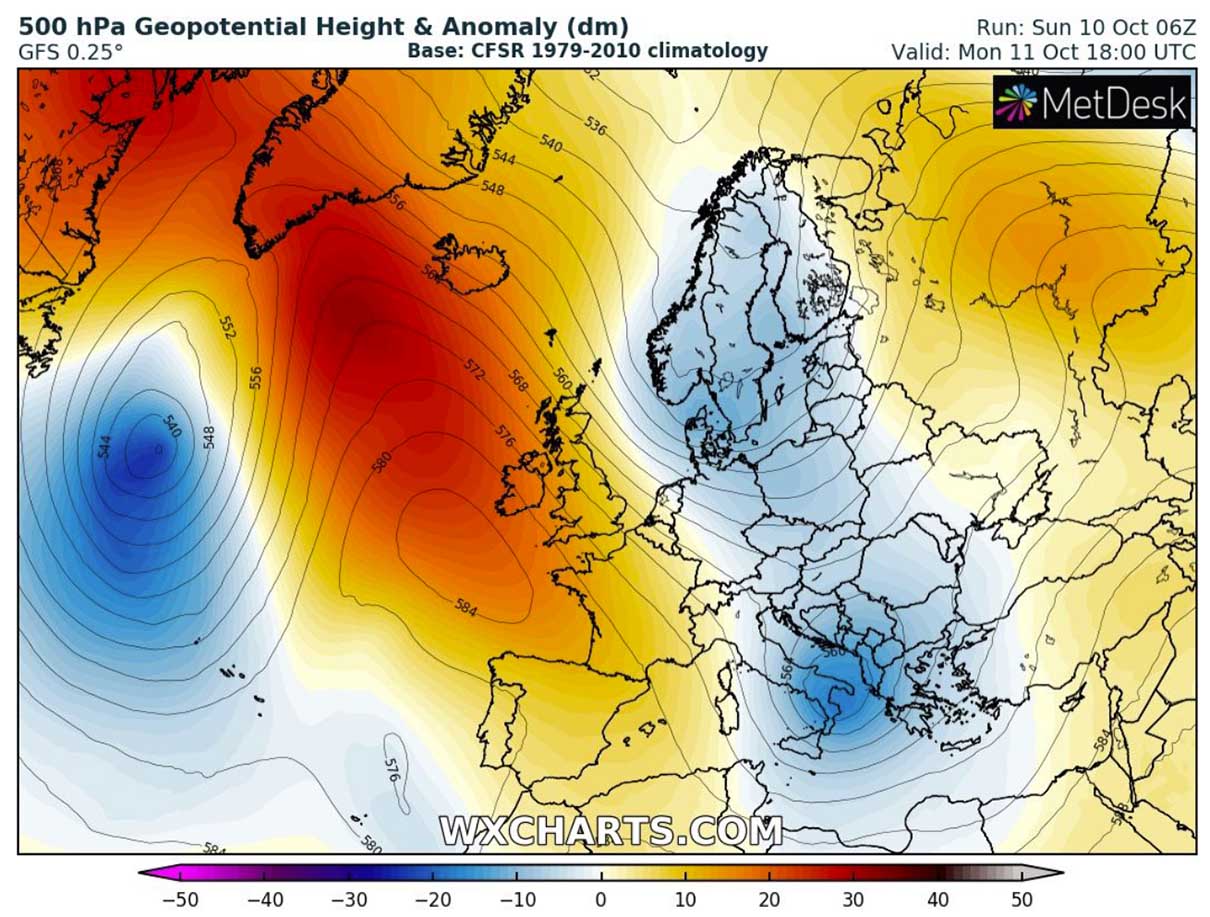 At the surface, the high-pressure system expands towards the far North Atlantic, connecting with the High over Greenland. One large surface low remains over Scandinavia, while the low over the Balkan peninsula and the central Mediterranean gradually losing its strength. 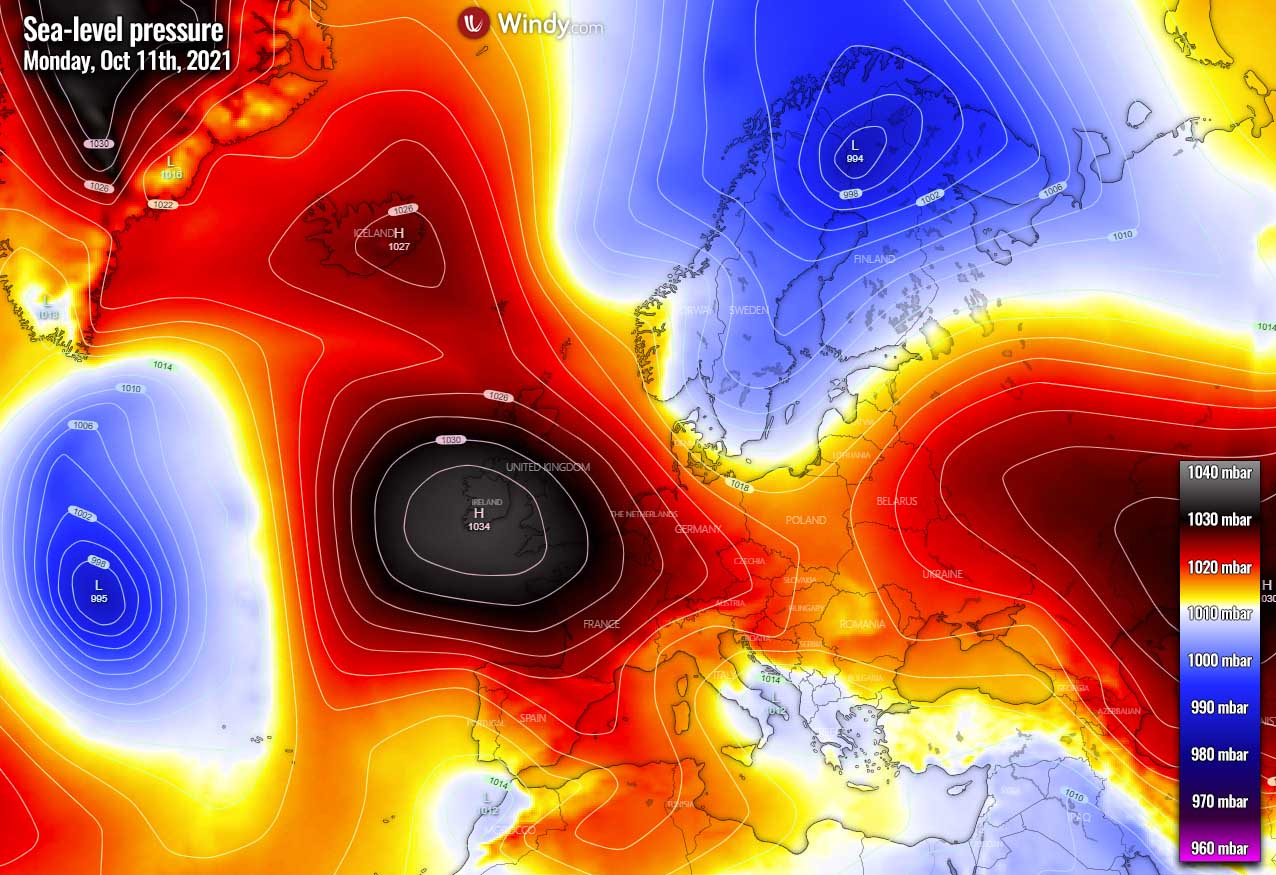 The expanded Highs mean there is no typical established zonal westerly flow towards Europe anymore. So the general flow turns more meridional, coming from the north. With the cold Arctics over there, it can only mean cold advection will overspread the European continent with time.

The temperature anomaly chart of Monday below hints at how this pattern is evolving. We can see warmth ongoing towards the north across the Atlantic while cold remains over the continent. With still pretty obvious cold pool sitting over southern Europe. 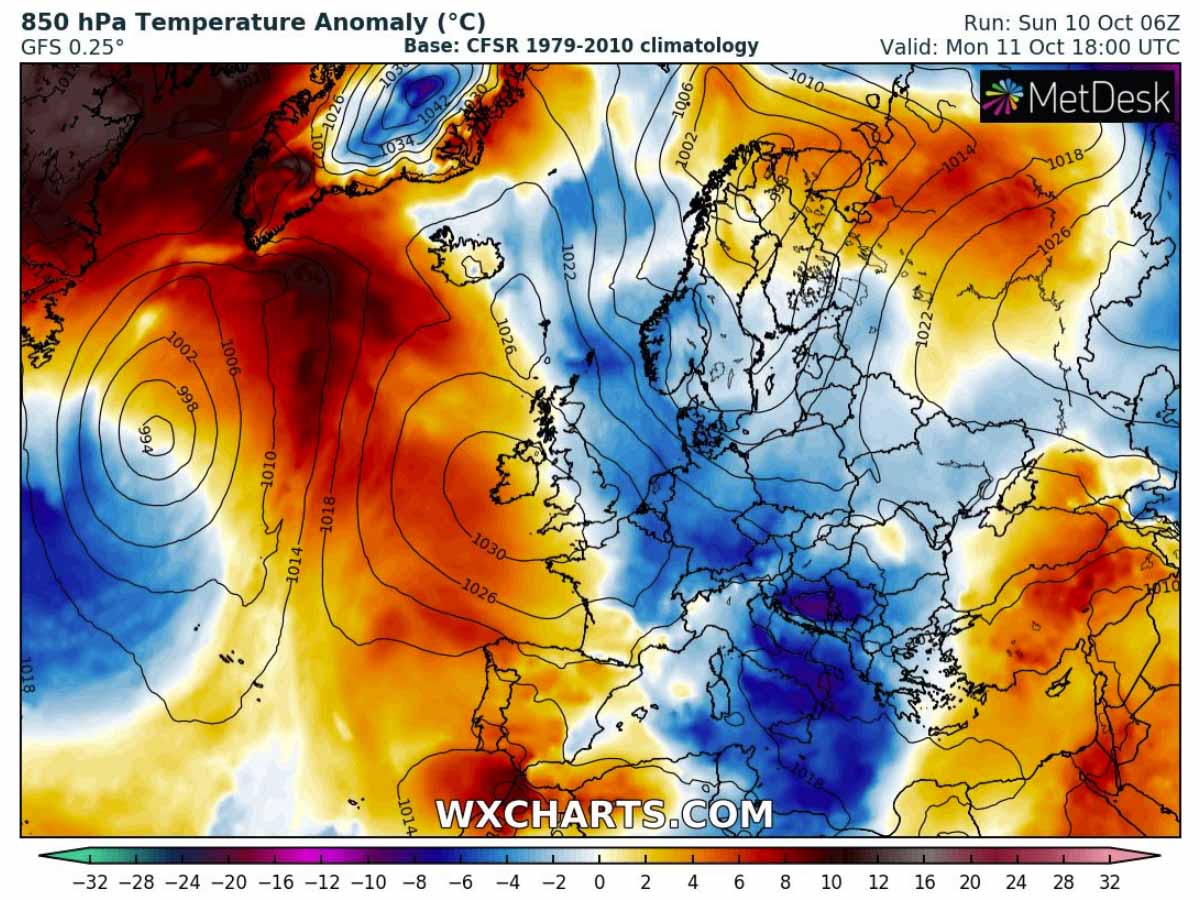 So the virtual channel is being established in between the two large-scale features, the upper High to the west and trough/lows to the east. Having the connection with the Arctics, it will deliver the air mass from this region farther south with time, as the general dynamics strengthen more throughout this new week.

A MASSIVE COLD BLAST SPREADS ACROSS LARGE PART OF EUROPE

The real deal begins into the mid-week as the general weather pattern gets into a higher gear. The North Atlantic upper ridge and surface High significantly strengthen towards Wednesday, introducing stronger meridional northerly flow into continental Europe. In its response, a large and deep upper trough establishes and covers much of Europe. 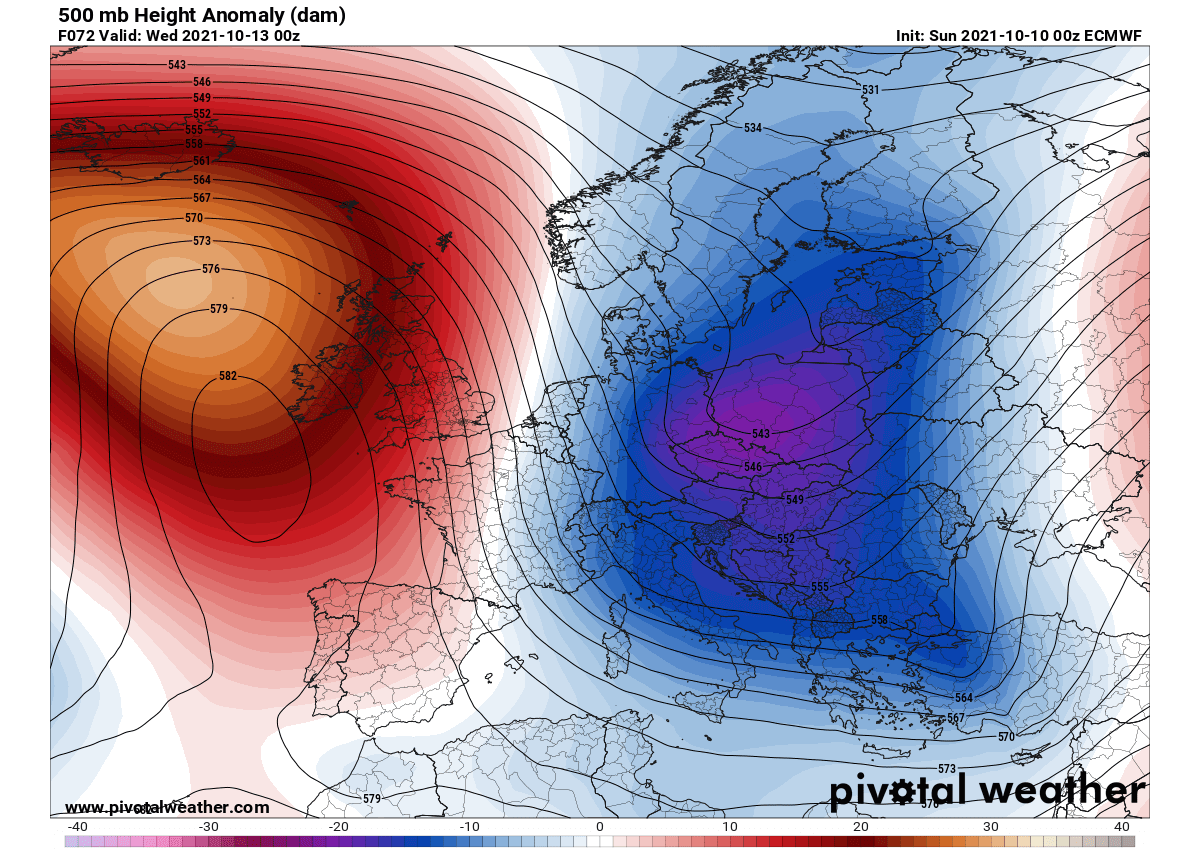 A classic, but strong dipole pattern will develop and is forecast to bring much colder weather through mid-October for many. Once we see such a strong contrast between these large-scale features, the real deal begins. A huge cold pool of much colder than normal air mass will begin its progress towards the south.

Temperatures are forecast to be even more than 10 °C colder than normal for mid-October across central Europe first, then also expanding across the Mediterranean and the Balkan peninsula late this week. 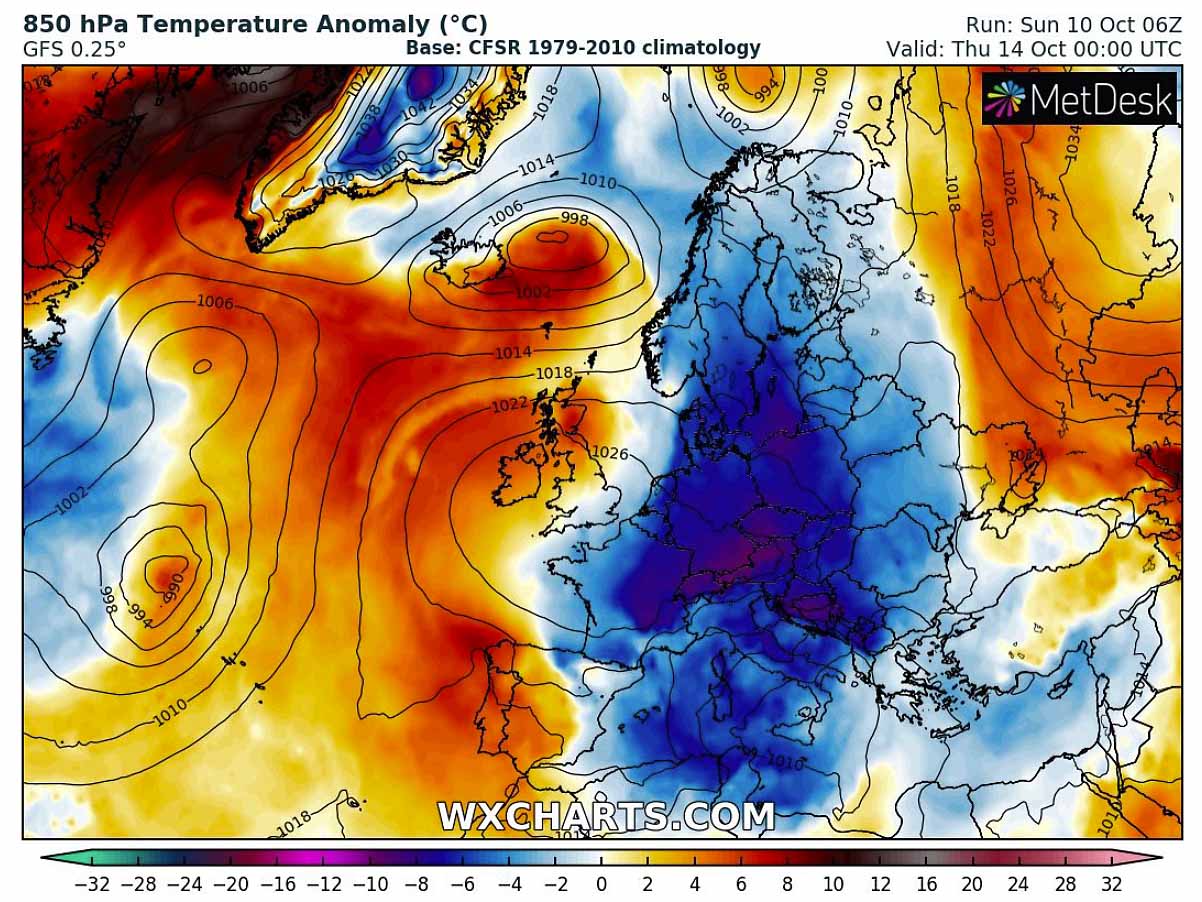 As we can see, a large part of the European continent should see much below normal temperatures this week again. Actually many regions will see an extended period of colder weather also throughout this mid-October week. Only western Europe and part of the western Iberian peninsula should see warmer weather in the coming days.

While the upper High begins weakening after Wednesday, the strong warm advection over the North Atlantic continues towards the North. And the cold pool expands far deep south into the Mediterranean, delivering extremely cold air mass for mid-October for the region. This should also develop another surface low that will help the cold advection to strengthen into southern Europe. 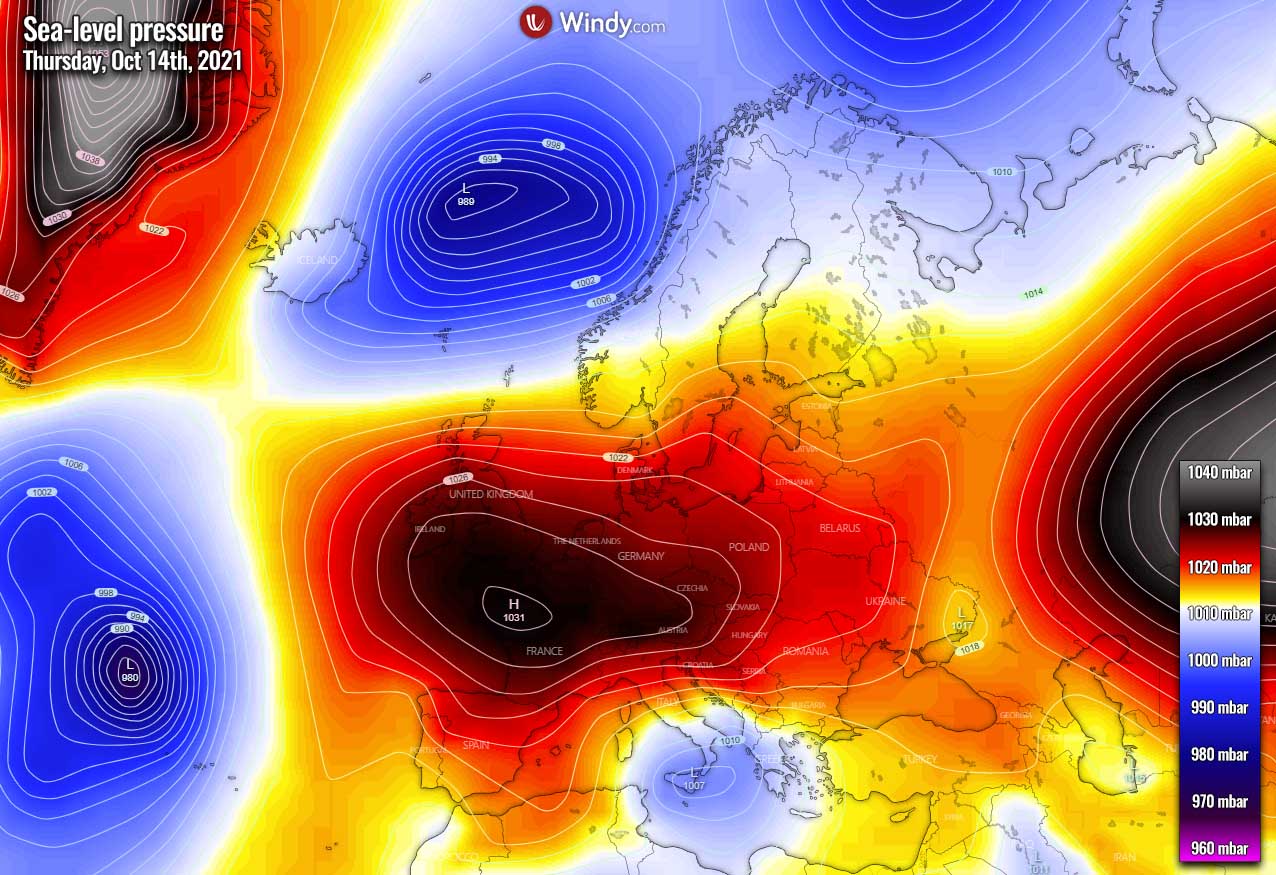 The surface high-pressure system will remain over western Europe but will begin its weakening process due to the collapsing upper High aloft. Its position in the immediate wake of the trough to the east, often allows cold air mass to spread across and around the Alps and continue far towards the south.

So it will be a very cold period for the western Balkan peninsula as well, again combined with strong downslope Bora winds along the Adriatic coast (Croatia). Temperature is forecast to be 8-12 °C below normal for this period, and also reach Tunisia and Libya after Thursday. 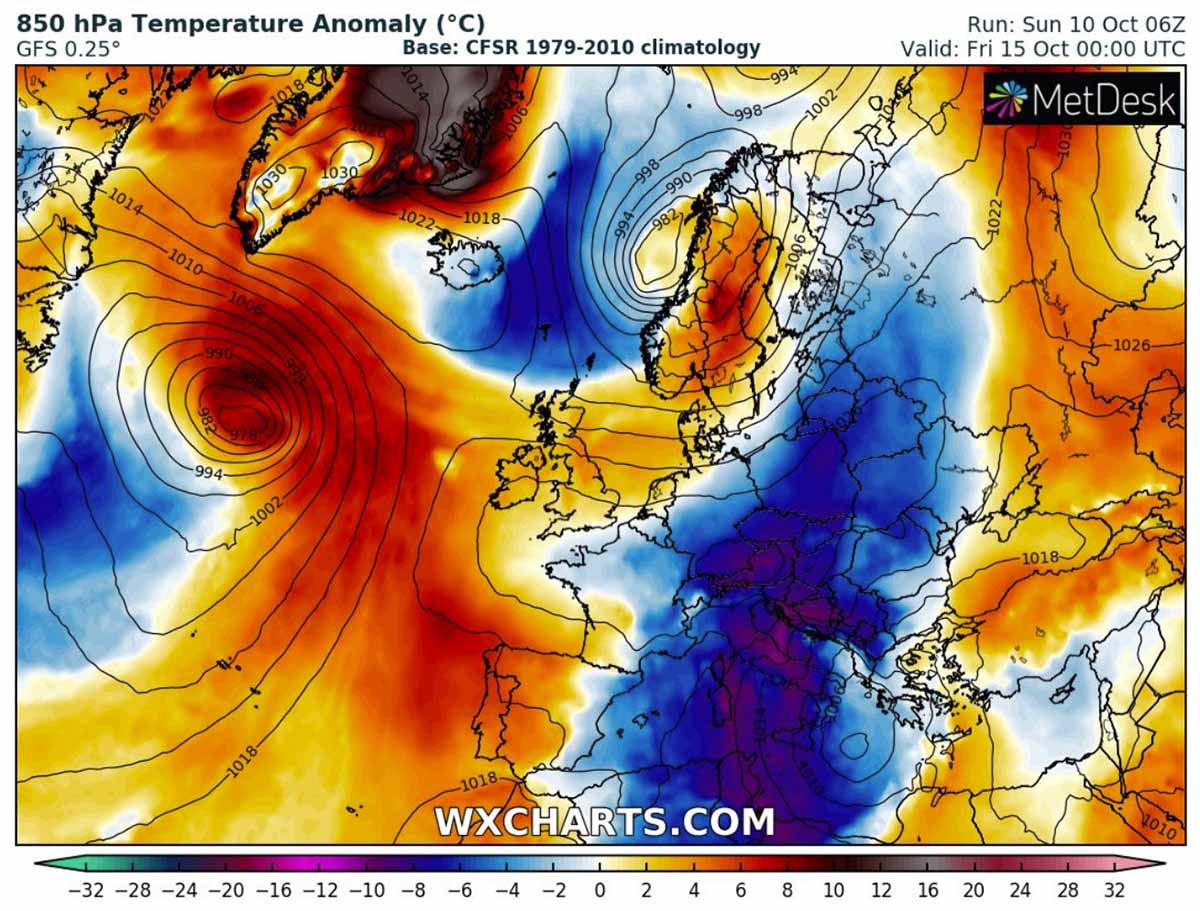 Expect some chances for more snow in the highest elevations over southern Europe, especially in the southwestern Balkan peninsula.

A LOT OF SNOW IS FORECAST FOR PARTS OF SCANDINAVIA, FLOODING POTENTIAL FOR GREECE

The general flow that turns to more meridional, so north-northwesterly, will bring a period of quite significant snowfall for the northern and northwestern Scandinavia. With the high mountain range extending from Lapland towards the southwest of the peninsula, strong orographic precipitation is the result.

This far north, temperatures will be cold enough that it will be heavy snowfall. And quite a lot of snow is forecast for western Norway, the northern half of Sweden, and Finland. Lapland will get a high snow blanket as well. 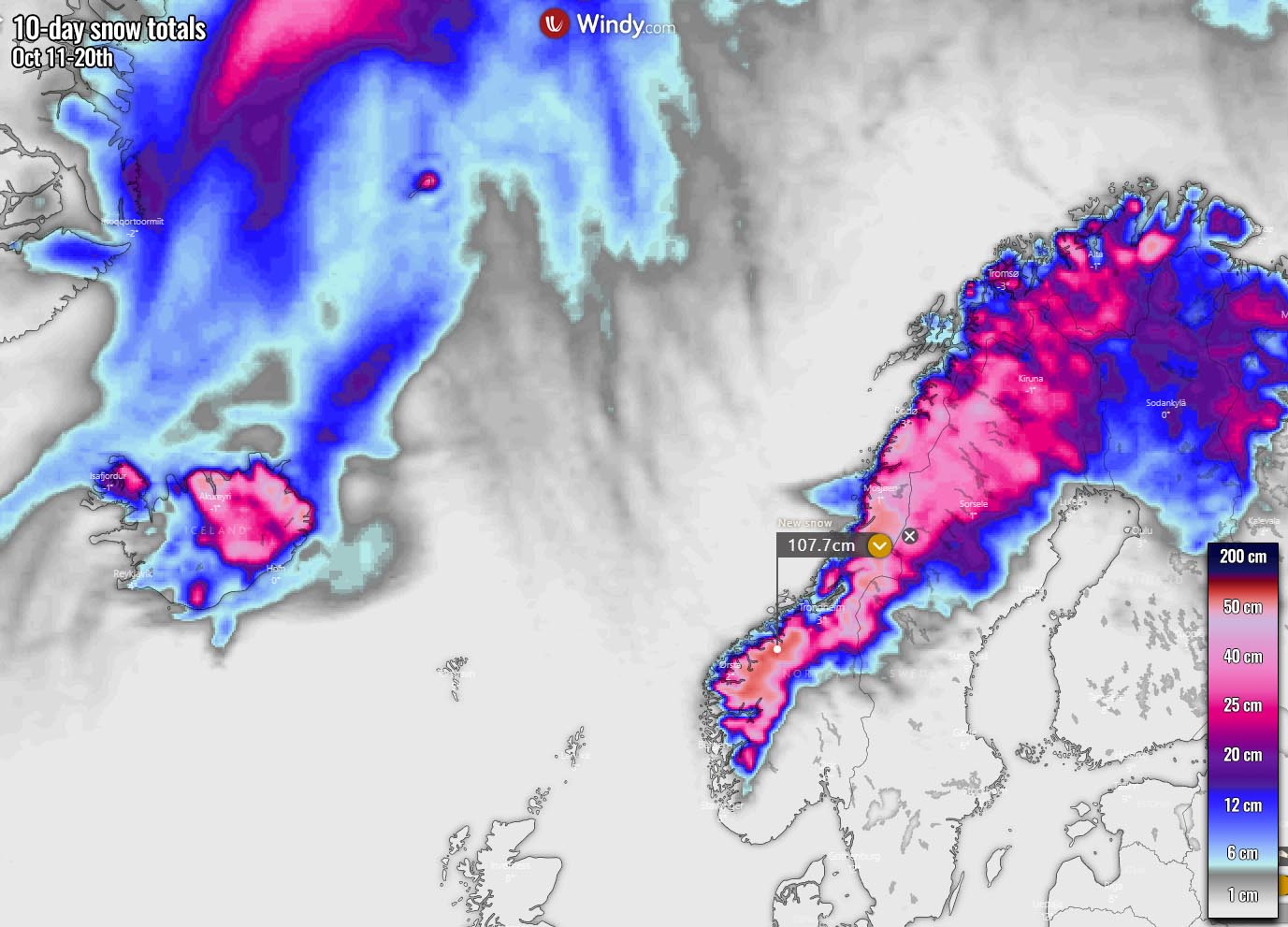 About 30-60 cm is quite likely to accumulate over the next 10 days, even more than 100 cm of fresh snow in the higher mountains where persistent orographic snowfall will be the strongest. Northerly flow should also bring quite some fresh snow for the northern half of Iceland, up to 30 cm is likely in some parts.

Despite a pretty significant cold advection towards southern Europe, keep in mind it will be more than 10 °C below normal, the mid-October period is still not cold enough to support a lot of snow that far south in the Balkan peninsula. A new surface low establishing in the Mediterranean late this week should bring more storms and rain to the south. 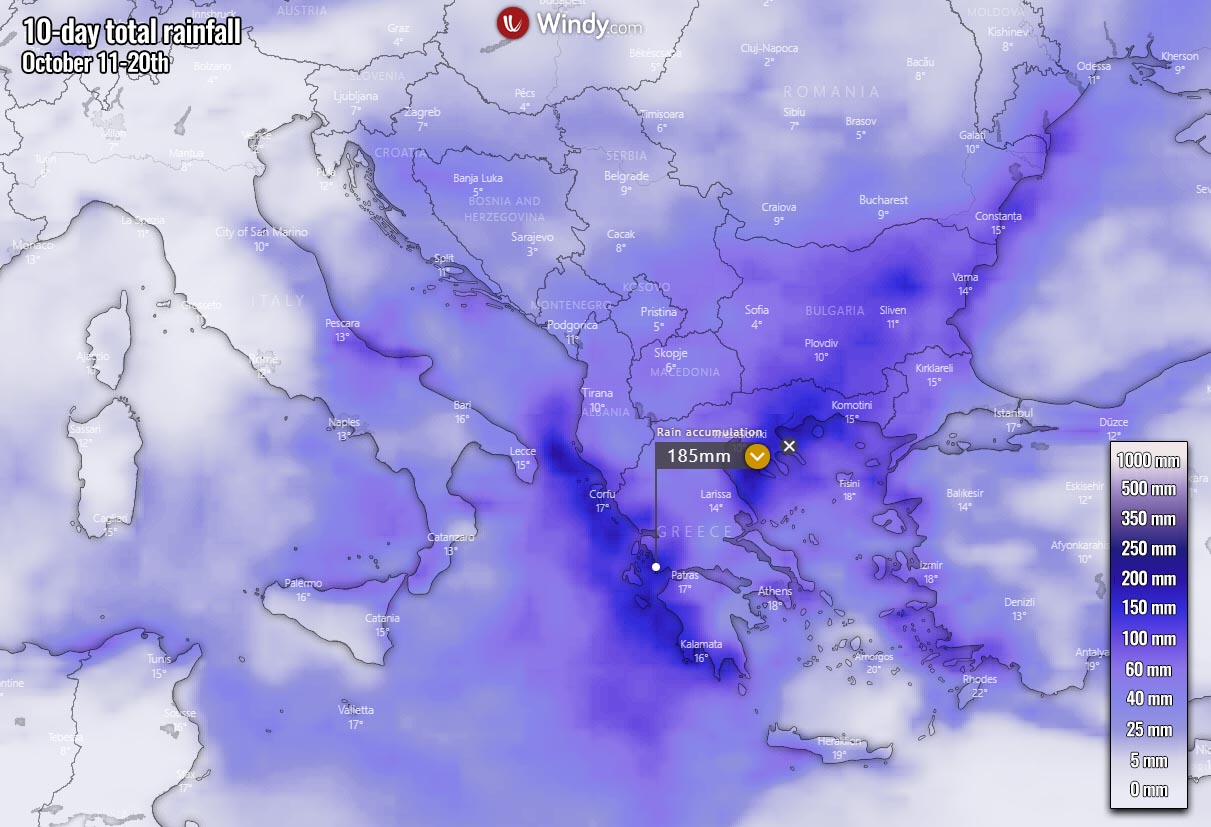 The general pattern will bring a lot of rain and further increase the flooding potential across the southern Balkans. Especially around Greece where a combination of warm advection and the frontal system should bring heavy rain, as well as thunderstorms, possibly severe weather as well. Some areas are likely to see another 150-200 mm of rain over the next 10 days.

Very cold mid-levels coming up with this new large pool of colder air mass overspreading the still warm Mediterranean should rise the potential for waterspouts and tornadoes as well.

COULD COLD EXTEND EVEN FURTHER?

The general model consensus is, however, not yet in good agreement regarding the weather pattern evolution for the next weekend. It depends on the North Atlantic dynamics if the upper High will re-establish or remain at least strong enough to limit the warm advection (more zonal flow) penetrating farther east.

Below is the GFS model forecast hint at its solution, supporting warmth to the west but an extension of the very cold period over central Europe and the Balkan peninsula. 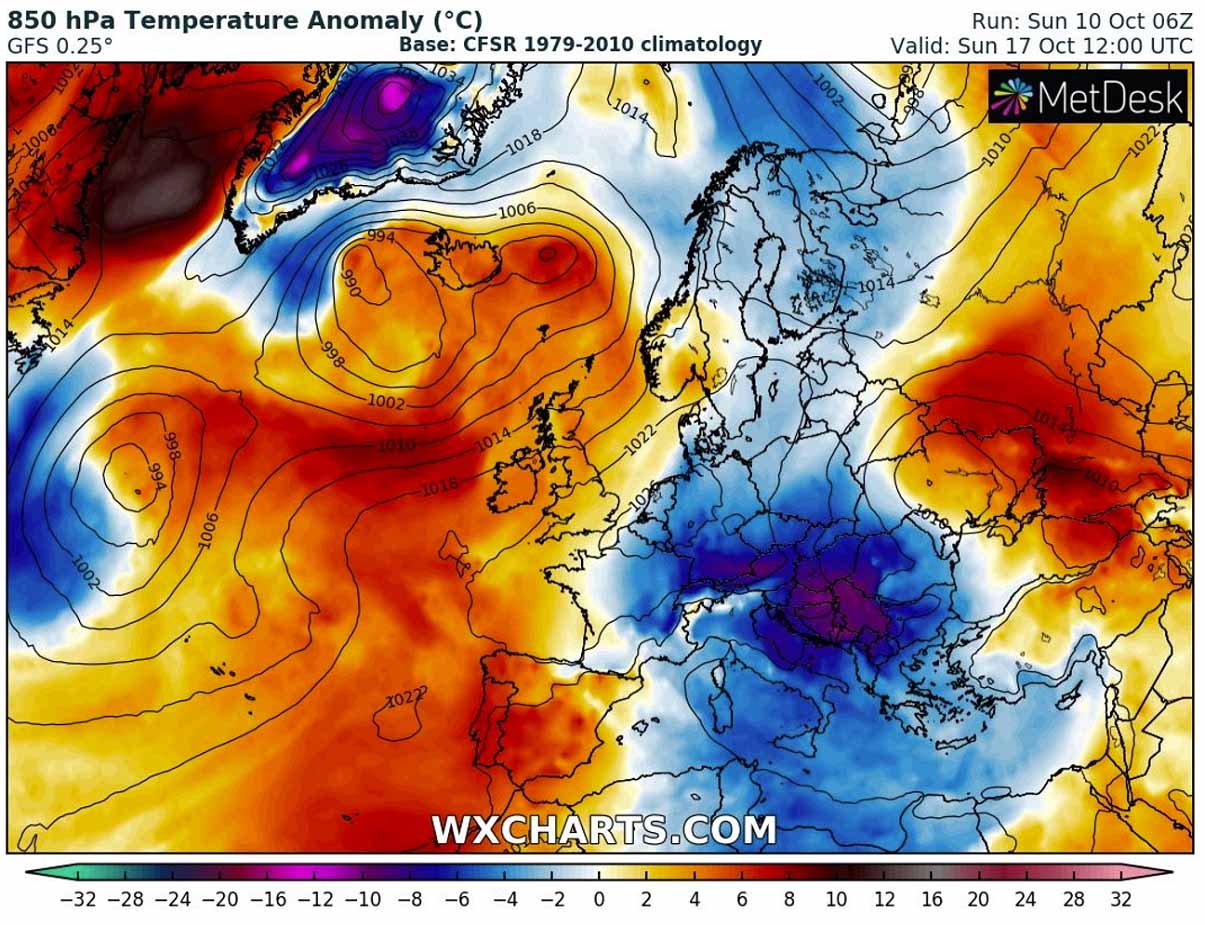 As we can see, the general connection between the north and south might still remain, which means that until the westerly flow cuts this channel, the weather pattern should not have many chances to change significantly.

Here is the overlook for the temperature and rainfall forecast over the next 14 days across the Balkan peninsula, Italy and North Africa. Attached below are GFS model Meteograms for Ljubljana (NW Balkans – Slovenia), Rome (Italy), Tunis (Tunisia), and Dubrovnik (SW Balkans – Croatia). 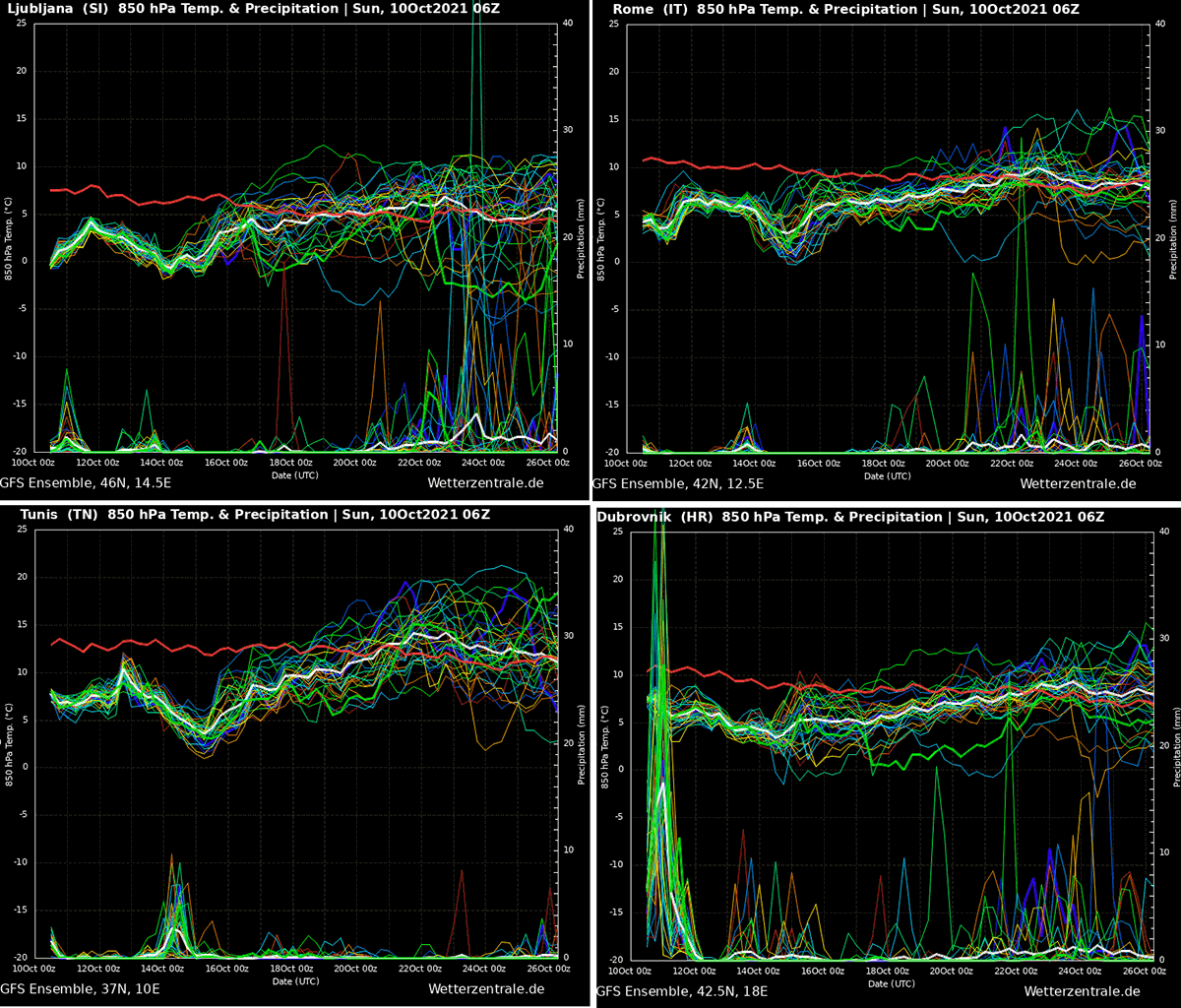 As we can see, a quite long period of much-below normal temperature is forecast to extend well through mid-October across central and southern Europe. While it will be mostly relatively dry cold, the southwestern Balkan peninsula and also Greece are in the threat of more rain/flooding as we discussed earlier.

The Dubrovnik chart (bottom right) surely does show a concerning amount of rain that will be ongoing through Monday and Tuesday. Flooding is likely.

Increasing Likelihood of Extreme Snowfall for the U.S., Scandinavia, and Asia in Future Winters Forecast While Western Europe Will Face Much Less Snow