The new Atlantic Tropical Storm Isaias has formed in the Northern Caribbean. The system is now located between Hispaniola and Puerto Rico. Explosive storms are seen by the satellite. Forecast models remain in a good agreement its center will first head for Hispaniola, then turning towards the Bahamas and potentially Floriday in the coming days. Some models are increasing the potential the system could even become a hurricane Isaias.

Tropical Storm Isaias is currently packing maximum sustained winds of 50 knots (60 mph) with the minimum central pressure is around 1004 mbar. Environmental conditions remain increasingly conducive for further development of this system and support maintaining a Tropical Storm strength in the coming days. 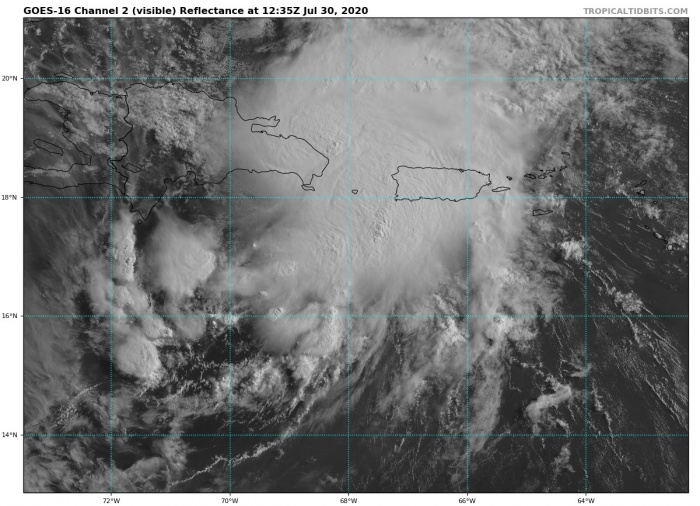 Isaias will produce heavy rains and potentially life-threatening flash flooding and mudslides across the Virgin Islands, Puerto Rico, the Dominican Republic, northern Haiti, and over the Bahamas.

Tropical storm conditions are likely across portions of the Virgin Islands, and Puerto Rico through this morning and will spread westward to portions of the Dominican Republic, Haiti, and the Turks and Caicos and the Bahamas later today and Friday. Tropical Storm Warnings are in effect for these areas. Do not focus on the details of the track forecast, as rainfall and wind hazards will extend far from the center of the system.

While this system could bring some rainfall and wind impacts to portions of Cuba and Florida later this week and this weekend, it is too soon to determine the location or magnitude of those impacts. Interests there should monitor the progress of this system and updates to the forecast over the next couple of days.

The satellite imagery indicates a rather impressive compact cluster of explosive storms, centered somehow in the middle between the Dominican Republic and Puerto Rico. Affecting both countries with heavy rain and flooding/mudslides threat. 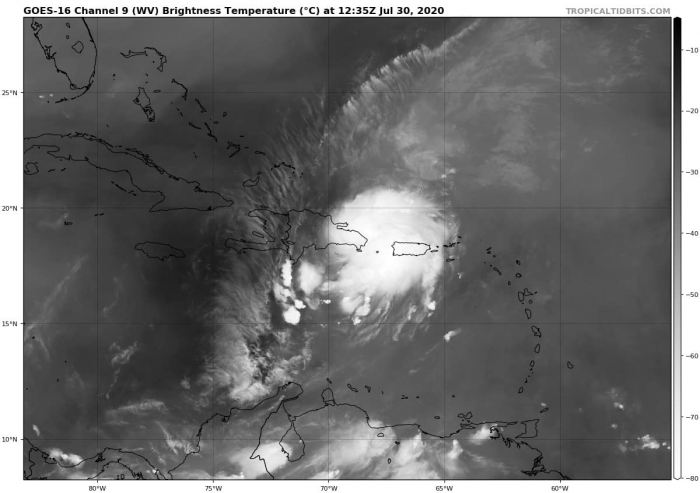 Storms should maintain/re-develop and also gradually increase in size in the coming days. Further intensification is likely. Isaias should move across Hispaniola and then continue towards the Bahamas and Florida.

The National Hurricane Center (NHC) is forecasting Tropical Storm Isaias to remain at Tropical storm force over the next few days. The forecast tracks it towards the northwest, across the Hispaniola first. Then, it should move between Cuba and the Bahamas towards Florida this coming weekend.

Global models are slowly in better agreement, although still hinting several solutions. The agreement in the good that Isaias will first impact Hispaniola and Puerto Rico. But then, it could get for northern Cuba or for the Bahamas. Eventually, it could even track in between the two countries and go straight for Florida landfall sometime this weekend. If the system curves more north, it could cross the Bahamas and head towards north to the east of Florida. US East Coast could be in the game in this scenario.

For now, most of the models are in good agreement regarding the Isaias’ intensity. It will likely remain at the tropical storm strength for a few days. But then we could be seeing a hurricane Isaias in some of the scenarios. Potential is definitely there, given the very favorable ocean heat content. NOAA Hurricane Hunters aircraft should reveal more details of the storm strength over the next 24 hours. 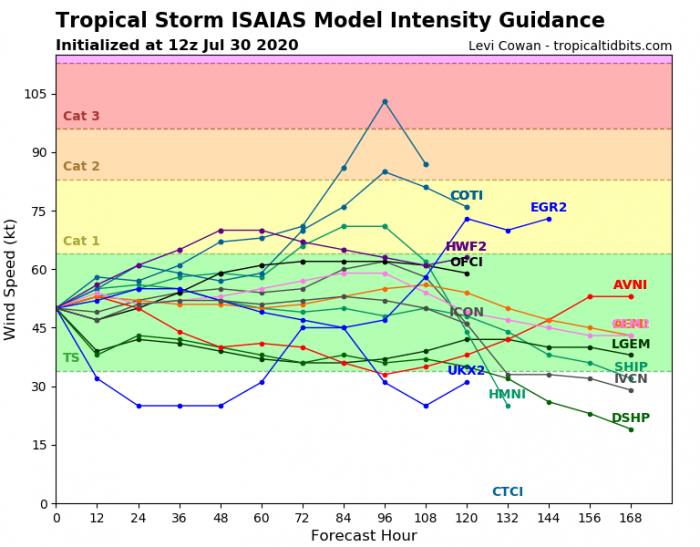 In majority, most of the forecast models are now pushing the system across the Bahamas towards southeastern Florida, However, there are still quite reasonable chances Isaias turns towards the Gulf of Mexico as well.

The main threat with the system is heavy rain and potentially life-threatening flash floods with mudslides across Puerto Rico and the Dominican Republic. A lot of rain is expected. Attached is the total 7-day rainfall forecast – 5-10″ of rain is likely along its path. Affecting the Bahamas, Florida, and later on the US East Coast as well. 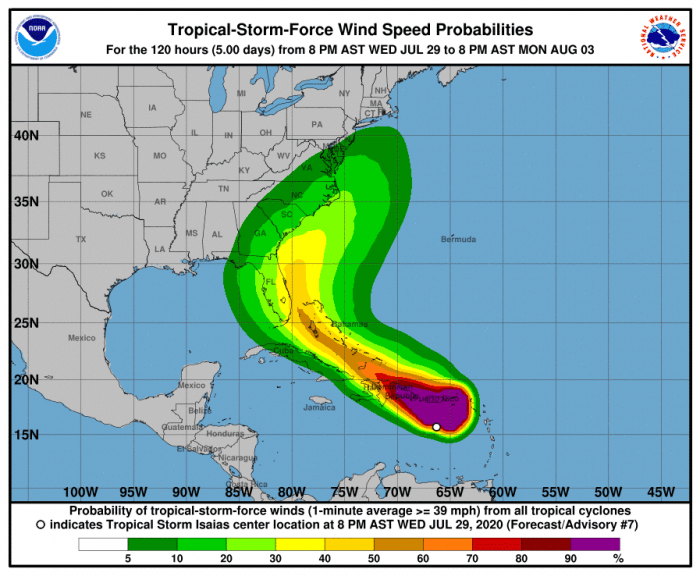 Stay tuned for further updates, especially if we will be seeing a hurricane Isaias developing before Saturday!