The Atlantic hurricane season continues with high activity this week. Currently, there are four tropical systems ongoing, one of them – the tropical storm Nana is expected to become a hurricane prior to its landfall in Belize tonight. Tropical Storm Omar is over the northwestern Atlantic and weakening. Two more tropical waves are near the west coast of Africa, with increasing potential to become tropical depression/storms over the next few days.

There are additional two tropical waves in the eastern Atlantic needed to be watched for further development soon. Both waves are expected to move westward into the central tropical Atlantic. 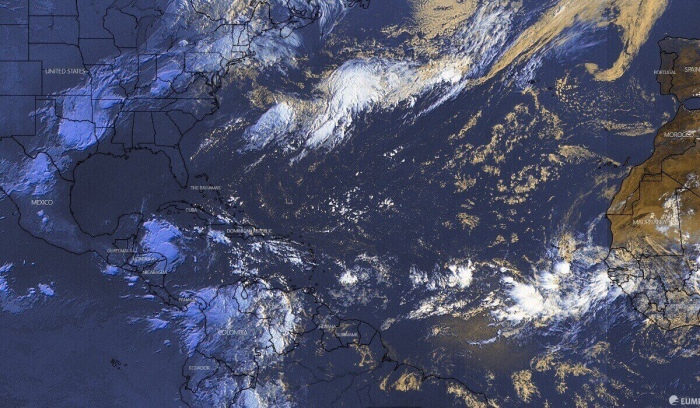 Tropical Storm Nana has a rather small circulation, but the overall convective activity is quite widespread. Deep and explosive storms are ongoing around the wave, currently centered over the Western Caribbean.

Healthy upper-level outflow ventilation is seen across the western portions of the system, allowing Nana to maintain its intensity and even gradually strengthening. 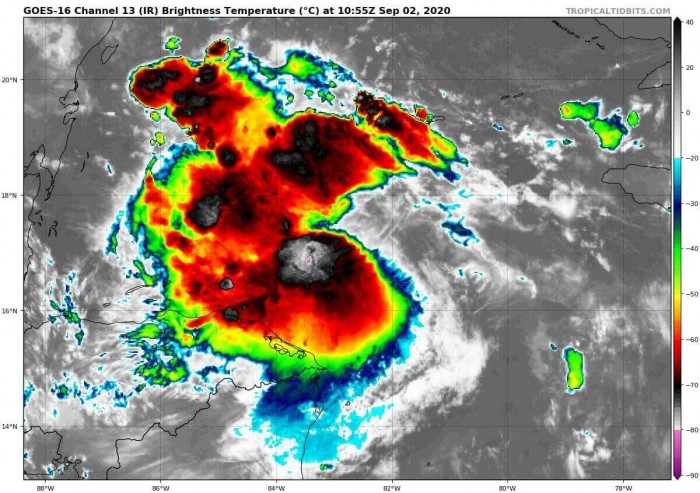 Nana is expected to reach a hurricane strength tonight, prior to its landfall. The landfall with a Category 1 strength is expected in Belize on Thursday morning, as forecasted by the National Hurricane Center.

The hurricane should reach around 60-65 knots (70-75 mph) maximum sustained winds during its landfall. 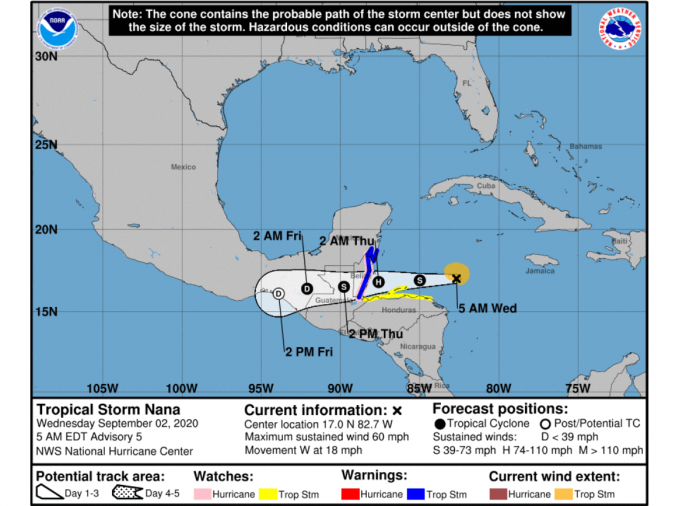 Various weather models are forecasting that Tropical Storm Nana will continue its western track and pose a threat for strong winds, dangerous storm surge and torrential rainfall with flash flooding are becoming more likely for the coasts of Honduras, Guatemala, Belize, and the Yucatan Peninsula.

Tropical Storm Nana sets a new record for the earliest ‘N’ letter storm on record. The previous record-holder was the Tropical Storm Nate which formed on Sept 5th in 2005. The last storm making landfall in Belize was a hurricane Earl on Aug 4th in 2018.

Attached is the total precipitable water across the tropical Atlantic. The atmospheric river of high water load is nicely visible, flowing from western Africa across the Atlantic Ocean into the Caribbean.

Tropical Storm Omar is having a hard time fighting against a strong, near 50 knots of northwesterly wind shear. An area of deep convection has been hanging close to the low-level center of the system.

Omar’s intensity is around 35 knots (40 mph) while it is in a gradual weakening trend. 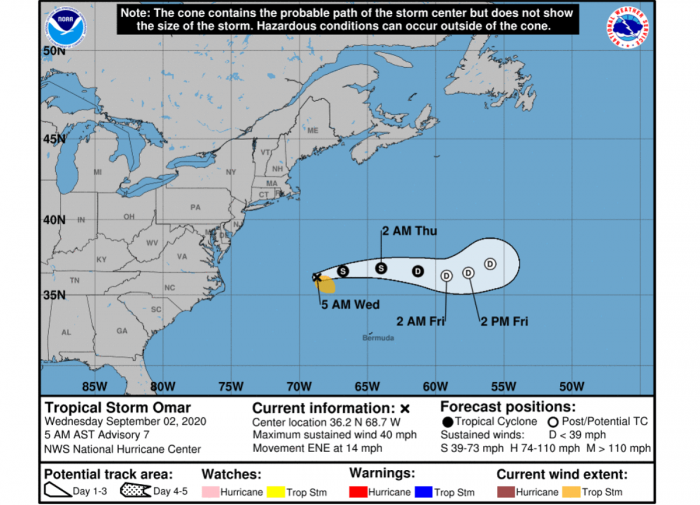 Omar could maintain its tropical storm intensity for another day, then its deep convection will likely become a remnant low by Friday. The system is embedded within the mid-latitude westerlies north of the subtropical ridge, causing Omar’s movement towards the east into the open Atlantic Ocean. 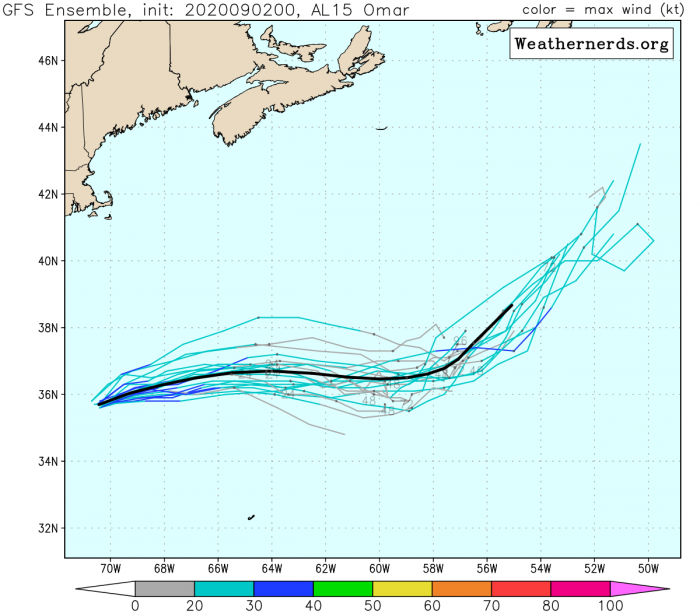 Widespread deep convective thunderstorms are associated with an area of a low-pressure system, located somehow in the middle between the Windward Islands and West Africa. Some additional development of the system is possible this week as it tracks further west over the central tropical Atlantic Ocean. 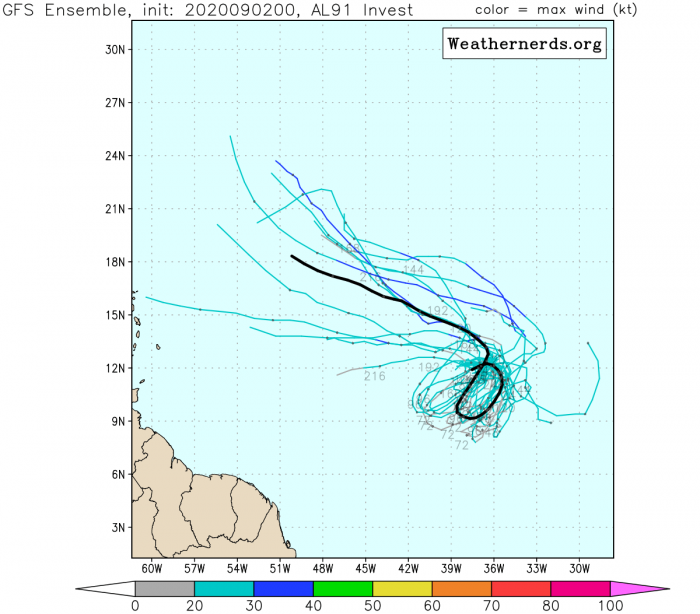 The overall environmental and oceanic conditions are quite conducive to tropical storm formation. Especially over the weekend, when some models are the hinting gradual strengthening of the Invest A91L.

The system surely needs to be monitored further for its potential threat to the Windward Islands and the Caribbean. 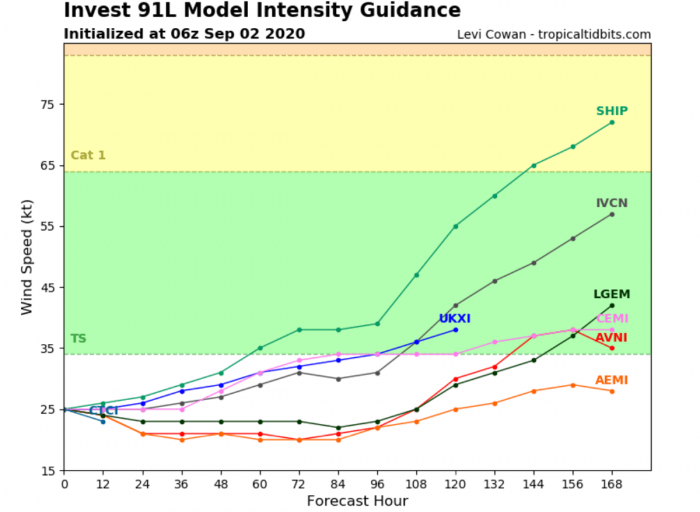 NHC is forecasting that Invest #AL91 has a 30 percent chance of tropical disturbance formation over the next 5 days.

The 4th tropical wave is hanging over the west coast of Africa. It is expected to emerge off the coast into the Atlantic today. The wave will merge with another disturbance, centered somehow southeast of the Cabo Verde Islands in the next two days.

Then, the gradual development of this merged system is possible. Potentially, a tropical depression could form over the weekend while tracking westward across the eastern and central tropical Atlantic Ocean.

A few weather models hint that this wave could develop into a tropical storm by the early next week. The environmental conditions seem to be conducive for further strengthening of the wave towards this week, so the system needs to be monitored further.

NHC is forecasting wave #4 has a 60 percent chance of tropical disturbance formation over the next 5 days.

Typhoon #Haishen is now exploding and rapidly gathering strength over very warm waters south of Japan. The powerful storm is expected to approach the Kyushu islands on Sunday, and is on its way to becoming a high-end Category 4 storm on Friday! See details on the link below: