After a historically low start of the Atlantic Hurricane Season 2022, the activity has ramped up as September rolled in. The month of August 2022 had no tropical storms or hurricane formations. Until Danielle, the first hurricane of the Atlantic season 2022, that has been upgraded from a tropical storm into a hurricane on Sept 2nd. Danielle is maintaining its Category 1 strength in the open North Atlantic, gradually moving east-northeast this week. It is forecast to become a subtropical storm by Thursday, gradually turning towards western Europe.

Thanks to significantly warm oceanic waters between the United States East Coast and the Bay of Biscay, Danielle will be the first tropical cyclone of the Atlantic Hurricane Season that will turn towards the European continent in 2022. 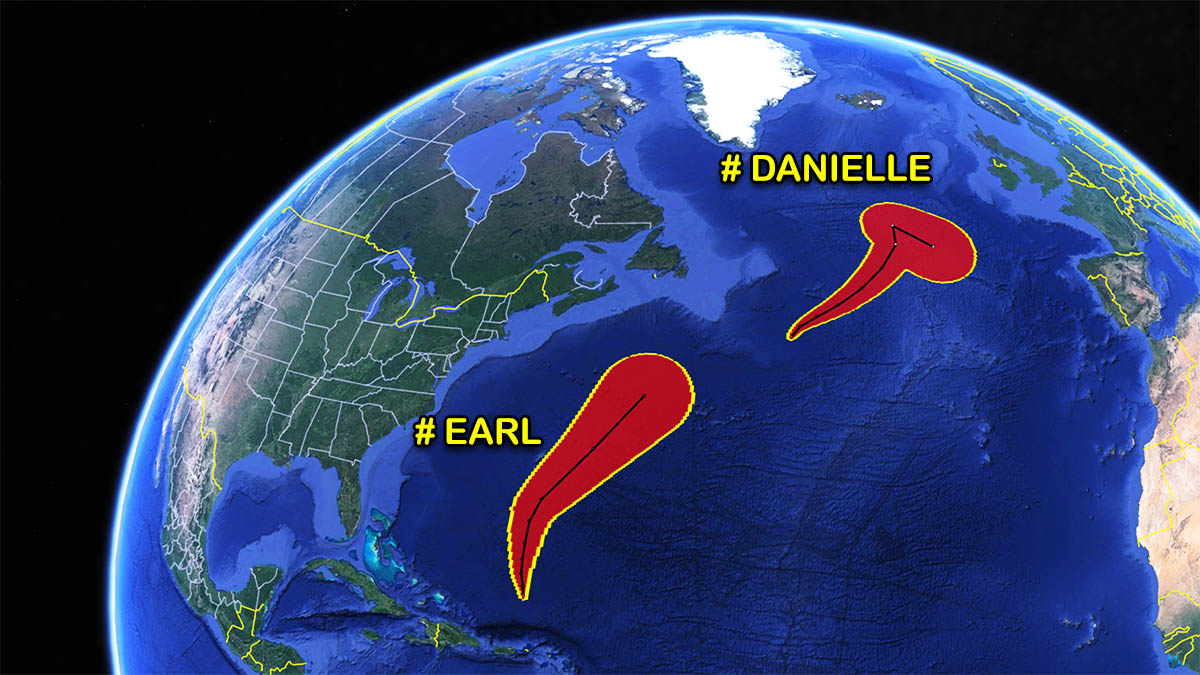 Further west in the western tropical Atlantic there is another tropical storm Earl, the 5th named system in 2022. Earl is also forecast to reach hurricane strength over the next two days, passing very near Bermuda on Friday and Saturday. Potentially becoming a strong hurricane with Category 2 or even 3 at that time.

Ocean waters across the whole tropical Atlantic, the Caribbean, and the Gulf of Mexico remain very hot and therefore anomalously warm compared to normal. This is, together with the upper-level weather pattern support, resulting in increased activity. As mentioned in the intro earlier, the Atlantic 2022 hurricane season also had no named storms in the month of August. This was only the third time since 1960 that this happens, after the years 1961 and 1997.

However, a slow start does mean nothing about how the coming peak months of September and October will be. The overall conditions are very favorable for the upcoming peak season period ahead.

As the global weather system is a very complex and dynamic system of chaos theory, therefore weather patterns are also very different around the world. Speaking of the tropical dynamics, these are one of the more complex things, having a lot of factors involving that all combined together. When the perfect combination of these is met, it leads to the formation of tropical weather events such as tropical storms or hurricanes, becoming a potential threat to land and property.

The Atlantic Hurricane Season 2022 has started with a very low, near record-low activity. There have only been three named storms until the end of August, two more – Danielle and Earl – both followed in September. As the date is closing in on the peak of the hurricane season, a more significant increase in activity is forecast to continue in the upcoming weeks.

On average, the Atlantic hurricane season produces up to 14 named tropical storms every year. Where 7 of those normally become hurricanes. Around 3 of them also reach major strength (hurricane of a Category 3 or greater). 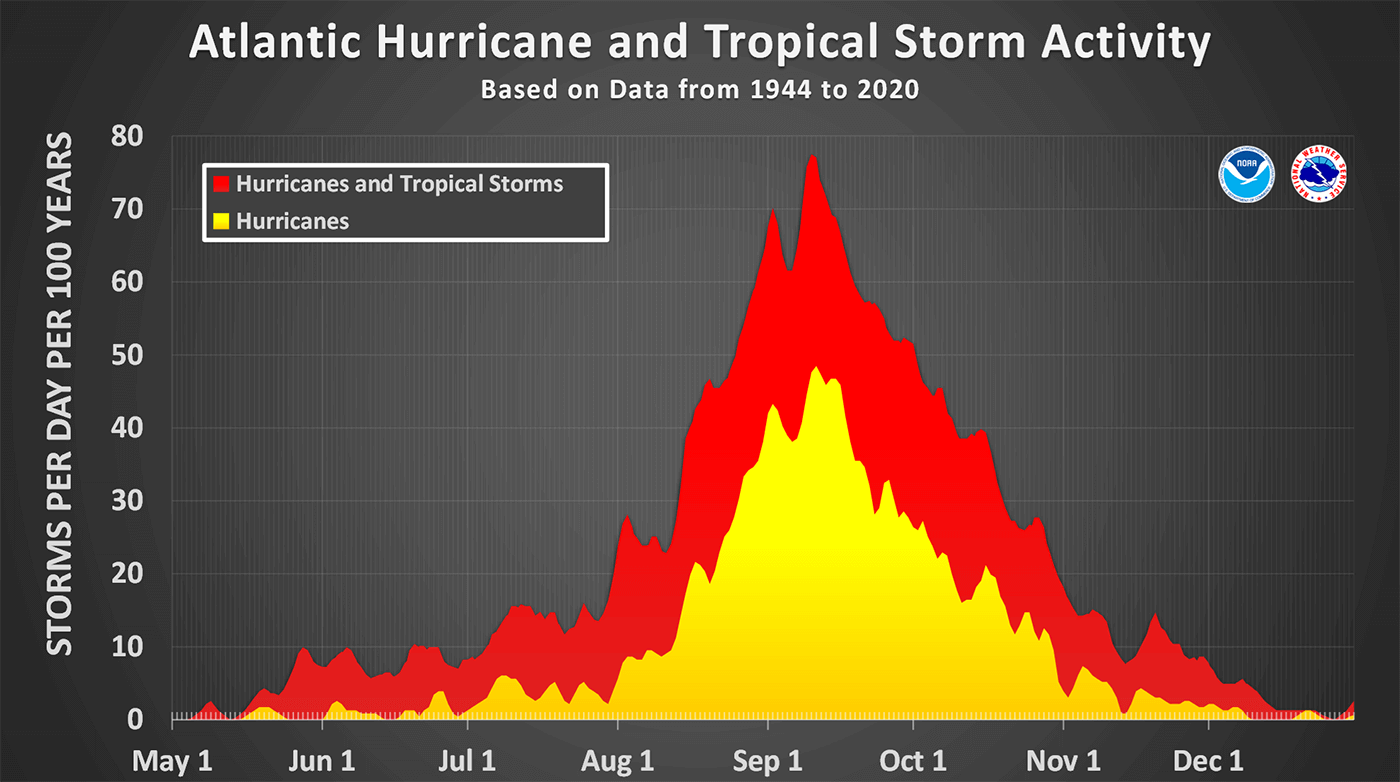 A typical Atlantic hurricane season has two peaks, the first period of increased activity occurs in the early through mid-September. Then, another boost in the activity normally happens through mid-October as we can see on the chart above.

Statistically, the general increase in activity across the tropical Atlantic Ocean begins through early to mid-August. This can tell us how well below-average the activity it was until the end of last month. As also the very first hurricane typically develops in mid-August, while we had seen the first hurricane – Danielle forming on Sept 2nd. For comparison, the first hurricane forming last year was almost 45 days earlier than normal.

Hurricane Danielle continues to maintain the Category 1 strength, thanks to the very warm waters beneath the cyclone and still favorable upper-level conditions. The video animation below is indicating satellite spectrum imagery, revealing a rather large cyclonic structure and an eye-like feature. The maximum sustained winds are at 75 knots, with the central pressure around 976 mbar.

A hurricane development is a very specific formation in the tropical region and is strongly sensitive to atmospheric conditions that are present at a given time. When the upper-level conditions, such as the MJO wave, are present, those have a strong influence on the state of the atmosphere. In other words, combined together with a very warm Atlantic they allow tropical storms or hurricanes to develop.

Tropical systems normally require a very warm sea temperature (26 °C or above), including very high moisture present. Also, a low vertical wind shear through the atmosphere is needed. A tropical wave, ejecting off the west coast of Africa, and traveling into the central Atlantic then helps to develop a surface low-pressure system which is then gradually strengthening into a tropical storm.

A tropical cyclone could quickly become a hurricane or even a violent, major hurricane of greater than Category 3 strength when all the required conditions are near perfect. Usually, near the peak Atlantic hurricane season, a strong influence on these factors brings intense tropical systems toward the Caribbean and the United States.

Unlike the mid-latitudes, the tropical region has no warm or cold fronts and the weather activity is in general a combination of showers and thunderstorms. That includes a larger scale pressure and wind variability. Most of the tropical variability is driven by invisible wave-like features that we find in the atmosphere around the world.

There are two most important waves, known as the MJO wave and the Kelvin waves. After the warmth of the oceanic waters, these two are the second and the third most needed ingredients for significant tropical development.

ATLANTIC BASIN WATERS ARE VERY WARM, INCLUDING THE CARIBBEAN AND THE GULF OF MEXICO

The Atlantic Ocean sea surface temperatures are normally very warm through the summer months. The most recent sea surface temperature anomaly reveals that basically the whole Atlantic Basin, especially the western parts, has anomalously warmed up this hurricane season. These areas are including the Caribbean, and the Gulf of Mexico, where both are having surface waters extremely warm.

As we can see from the chart below, tropical storm Danielle has taken the advantage of this significantly warmer oceanic water, and rather quickly intensified into the first hurricane of the Atlantic season. Despite Danielle is located in an unusually high latitude for a tropical cyclone, the sea surface temperatures of around 2 °C warmer than normal giving the important fuel for its strengthening. 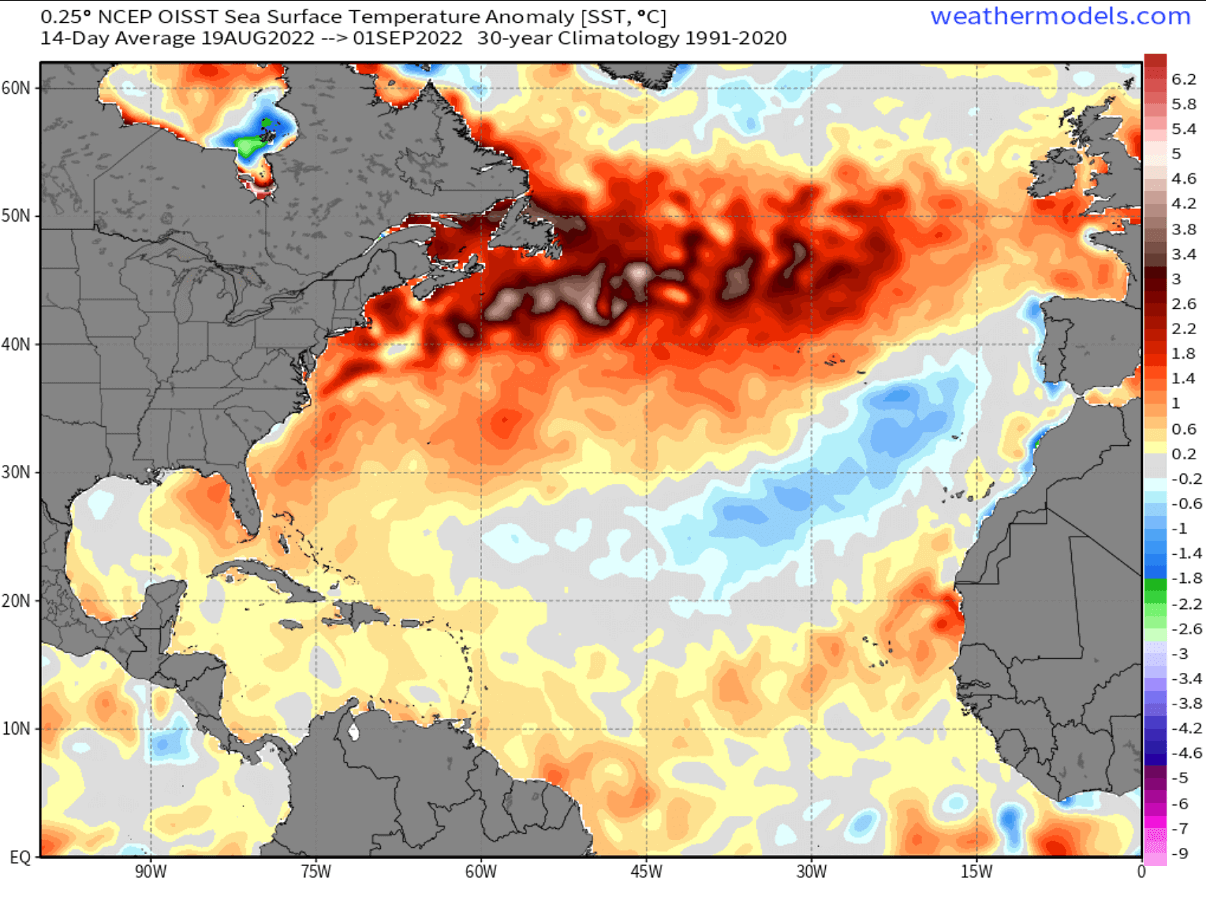 This is a very significant signal for the upcoming weeks when tropical storms are the most frequent, and often also the most intense, tracking closer to the Caribbean region and the United States mainland. It often happens, that the explosive development of tropical storms occurs when tropical cyclones encounter such warm and moist fuel at the sea surface. 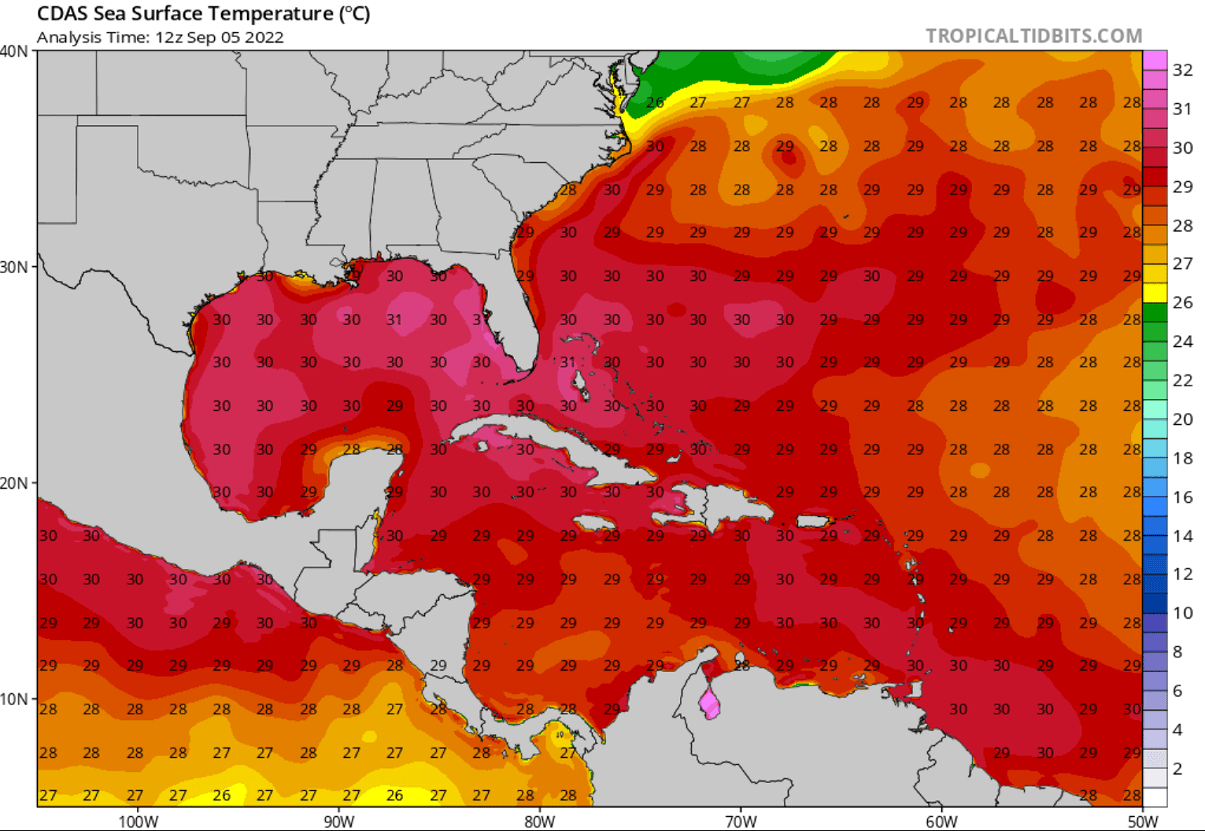 Thanks to the very calm weather across the tropical Atlantic in recent weeks, oceanic waters have anomalously warmed also across the so-called MDR region. The MDR region is known as the Main Development Region, extending between Africa and the Caribbean Sea. The majority of the tropical system form in this region.

When the tropical waves begin ejecting off the west coast of Africa, warmer than normal waters hint at the enhanced potential for significant tropical cyclone development. Because convective storms are mainly fueling themselves from the very warm tropical Atlantic ocean waters. According to the weather forecasts for the upcoming weeks, the Atlantic waters will remain very warm through the peak of the Atlantic hurricane season 2022.

The current strongly anomalous sea surface temperatures are quite typical when the very active Atlantic hurricane season follows around the peak weeks from mid-September through late October.

During the second half of August, we have been tracking a pretty significant MJO wave over far eastern Atlantic and central Africa, gradually moving east. Its western part resulted in several tropical waves into the eastern Atlantic, soon becoming Daniele and Earl.

The MJO is known as the Madden-Julian Oscillation or short MJO wave. A very important factor for tropical activity and cyclone formation around the world. The MJO wave is the largest and also the most dominant source of short-term tropical variability. It is the eastward-moving wave of convective showers and thunderstorms and typically circles the entire planet in about 30 to 60 days.

On the chart below, provided by Michael J. Ventrice, we see the MJO wave with filtered VP200 anomalies for the current week’s state and the forecast for a week ahead. The blue colors on the chart (cold) mean more favorable conditions for tropical cyclone development and the red colors (warm) are showing where there is a less favorable state for tropical cyclogenesis present.

As we can quickly notice from the attached chart, there are favorable conditions over the Indian Ocean, improving over the western Pacific. While less favorable conditions are across the eastern Pacific Ocean and towards the western Atlantic Basin. This can clearly tell us that conditions on both sides of central America are less supportive of tropical development this week, but those are somehow better towards the central and eastern Atlantic where tropical storm Earl and hurricane Danielle are ongoing right now.

The VP200 marked on the chart above indicates a Velocity Potential (VP). An indicator representing the large-scale divergent flow in the upper levels of the atmosphere over the tropical region. Where we have the blueish colors, the negative VP anomalies are found. This means a divergent outflow from enhanced convective regions which, when combined with low shear and high sea surface temperatures, leads to tropical cyclogenesis.

The reddish colors, indeed represent the opposite in this case. There, a converging flow aloft leads to a suppressed convective activity in the region underneath. A deep MJO wave also brings a low wind shear environment, the other important factor that helps to trigger tropical storm development.

Besides the MJO wave, there are also other waves that are directly related to the large-scale wave as the MJO wave. In a smaller size are the atmospheric Kelvin wave, known as the tropical rainfall systems accompanied by characterized westerly and easterly wind patterns.

Early this week, hurricane Danielle had some degradation of its satellite appearance, but the system has again regained strength and appears to be holding more steady. The colder cloud tops are wrapping further around its center than has been observed on Monday morning. According to the Dvorak-based intensity estimates, Danielle still supports an intensity near 75 knots. A solid Category 1 hurricane strength.

The hurricane has moved a little faster north-northeastward than it was previously anticipated, the initial motion is estimated at 30 knots.

Hurricane Danielle is forecast to gradually weaken during the next few days as it moves over marginally cool waters compared to where it is located this Monday.

The most dynamical weather model guidance suggests the system will still maintain its tropical characteristics for at least a couple more days, likely until Wednesday at least.

After Wednesday, weather forecast models suggest Danielle will be moving over significantly lower water temperatures, around 20 °C. This will likely allow the cyclone to transit into an extratropical storm while gradually moving further east-northeast, closer to western Europe land.

The satellite presentation on Monday revealed that Earl’s structure continued to evolve and look better organized than on Sunday. The deepest convective activity is located primarily north of the low-level circulation center which still appears partially exposed.

Lightning data suggests that the cold convective tops are continuing to rotate up-shear against the moderate westerly vertical wind shear. Thus they may be helping to better align the low and mid-level centers.

Later this week, when Earl will strengthen into the 2nd hurricane of the Atlantic season, its center is expected to pass to the southeast of Bermuda. This should occur after Thursday, more likely passing near Bermuda on Friday or Saturday. As the wind field of the tropical cyclone is expected to increase significantly as the storm develops, interests on the island should continue to monitor the progress of the storm closely.

*******
With the peak weeks of the Atlantic Hurricane Season 2022 approaching fast, residents of the coastal areas should always be hurricane aware. No matter the forecast.

Our team will be closely monitoring any further development in the tropical region and will keep you updated with every potential land impact that could develop. Stay tuned.