A Hurricane Watch is in effect along the central Gulf Coast, ahead of a developing tropical storm Ida. An increasing risk of dangerous hurricane-force winds are along the portions of the coasts of Louisiana and Mississippi, including metropolitan New Orleans. Ida is the 9th named tropical cyclone of the Atlantic Hurricane Season 2021 and is expected to become a dangerous Major Hurricane prior to landfall on Sunday this weekend.

A Tropical Storm Ida has formed on Thursday night in the Caribbean, taking an advantage of very favorable oceanic and environmental conditions. Low wind shear and high seawater temperatures are present in the region. Ida is the 9th named tropical cyclone of the already very active Atlantic Hurricane Season.

Associated with strengthening Tropical Storm Ida this Friday, tropical storm conditions are occurring in portions of the Cayman Islands and are expected in portions of western Cuba and the Isle of Youth today through tonight. Dangerous storm surge is also possible in areas of onshore flow. Life-threatening heavy rains, flash flooding, and mudslides are expected across Jamaica, the Cayman Islands, and western Cuba, including the Isle of Youth. 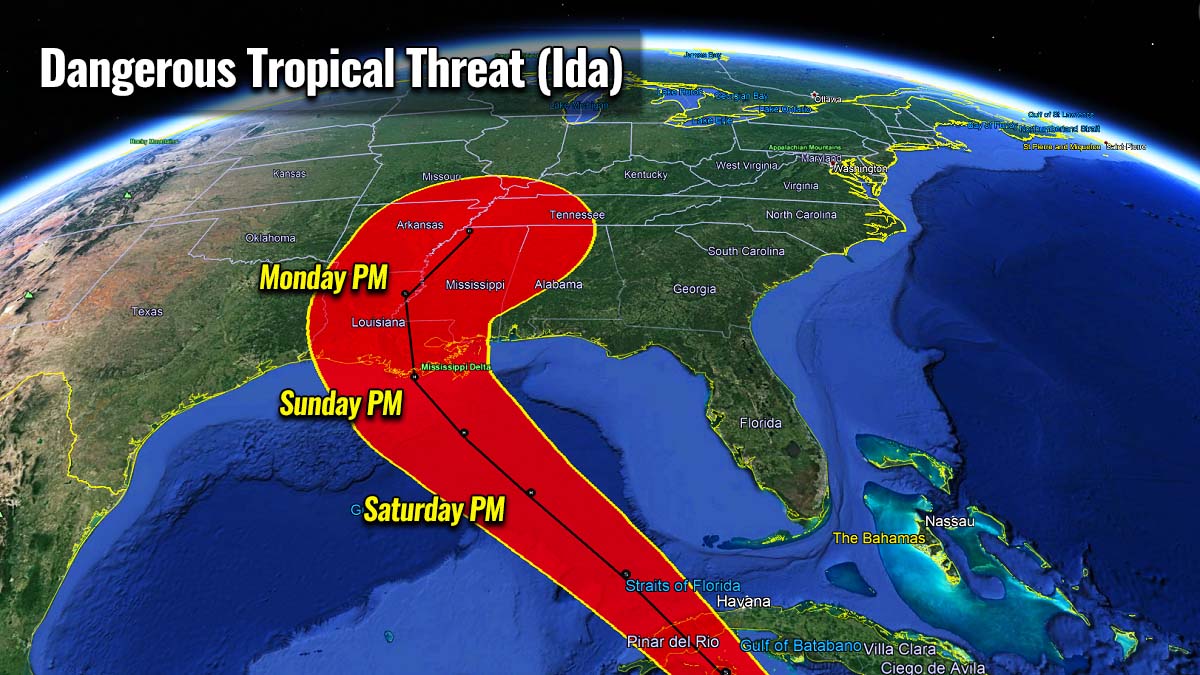 Then, Ida is forecast to track into the extremely warm sea waters in the Gulf of Mexico and is very likely to enter rapid intensification and become the 4th hurricane in the Atlantic Basin this year. As it heads for the landfall in the US Gulf Coast, there is a significant potential Ida could be a major hurricane when it reaches Louisiana or the Mississippi coast.

Tropical Storm Ida is expected to produce heavy rains across the central Gulf Coast from southeast Louisiana to coastal Mississippi, Alabama, as well as the Lower Mississippi Valley starting Sunday into Monday. This should very likely result in a considerable flash, urban, small stream, and riverine flooding.

Also, there is an increasing risk of life-threatening storm surge inundation along the coasts of Louisiana, Mississippi, and Alabama. A Storm Surge Watch is already in effect.

Attached below is the satellite animation of strengthening Tropical Storm Ida. Very explosive convective storms are visible south of Cuba, indicating how favorable the conditions are in place.

The circulation of the system is also very large, so Ida is impacting the large portion of the Caribbean with significantly worsening conditions over Cuba today.

With Tropical Storm Ida becoming the 9th named storm this year, 2021 is already past half of the seasonal average. The Atlantic Hurricane Season 2021 already produced 3 hurricanes (Elsa, Grace, and Henri) where Grace was also a major hurricane (it peaked as a Category 3 storm) prior to its landfall in Mexico last week.

Atlantic Hurricane Season normally has two peaks when a significant increase of the activity ramps up. The first usually happens through the second half of August into early September, thanks to the increase in the tropical waves moving across the Atlantic, affecting both the Caribbean region and the United States. Statistically, another boost in tropical activity happens around mid-October.

The activity in the tropical region around the world is one of the most complex meteorological fields. As specific conditions must combine together that the development of dangerous tropical weather threats occurs and impacts the land and property.

The most dangerous parts of tropical cyclones are their landfalls to vulnerable coastal areas every year and those are becoming even worse due to the warming Atlantic Ocean waters.

EXTREMELY WARM WATERS OF ATLANTIC, CARIBBEAN AND THE GULF OF MEXICO

The Atlantic Ocean water surface temperatures (SST) usually warms up a lot in the summer, often leading to temperatures even well above 30 °C in some portions of the Caribbean and the Gulf of Mexico. The recent sea surface temperature anomaly analysis is showing that waters are anomalously warm, close to 4 °C above normal.

The warmest sea waters are across the Caribbean, and especially across the Gulf of Mexico, ahead of the track of hurricane Ida. Temperatures are ranging from around 30 to 32 °C across most of the Gulf of Mexico, being the highest along the central Gulf Coast. These temperatures are extremely high for late August and will likely contribute to the rapid intensification of hurricane Ida over the weekend.

Water temperatures this high usually lead to the explosive development of dangerous tropical cyclones. This is a quite typical occurrence during the peak of the Atlantic hurricane season. (Very) Warm waters are an alarming signal for any of the upcoming tropical cyclones moving across this part of the tropical region.

Convective storms that are associated with hurricanes directly fuel from these conditions and lead to their additional strengthening. The SSTs are anomalously warm also in the MDR region (Main Development Region), a part of the Atlantic that extends between the Caribbean Sea and Africa. Normally, most of the tropical cyclone formations occur in the MDR region.

The Atlantic Basin oceanic waters temperature anomalies are strongly above normal across the region and are forecast to remain or even improve in the coming weeks.

The satellite imagery over the past 24 hours and aircraft hurricane hunters observations have found that Ida continues gradually strengthening while moving northwest across the northern Caribbean region. Ida is first impacting the Cayman Islands and portions of western Cuba through Friday night, then emerging into the Gulf of Mexico.

With the very warm temperatures across the Gulf of Mexico, Ida is expected to intensify into a hurricane soon after entering the Gulf. And likely to continue into even faster strengthening and near-ideal conditions seem in place ahead of the storm.

The Ocean Heat Content (OHC) chart below is showing very concerning conditions right ahead of where hurricane Ida will be traveling through Saturday and Sunday. OHC values of more than 100 are usually more than enough for major support to explosive development, but we are seeing even higher values along Ida’s track.

Very low vertical wind shear and seawater temperatures up to almost 32 °C will allow rapid intensification in the final 24 hours before the landfall is forecast to occur along the central Gulf Coast, somewhere along the coast of Louisiana and Mississippi on Sunday night. Ica could easily reach a Category 3 or even higher strength by Sunday.

This Friday, radar data from Grand Cayman and satellite imagery indicated that Ida has becoming better organized just to the north of Grand Cayman with the convection becoming more concentrated near the center, and the radar data is showing increasing curved banding.

Very heavy rainfall with an enhanced potential for an areal, urban, small stream, and exacerbated river flooding with mudslides is likely to develop across parts of Jamaica, the Cayman Islands, and western Cuba through Friday night. While Tropical Storm Ida will then emerge into the Gulf of Mexico on Saturday.

There is still a quite significant difference between the weather forecast models, mainly as Tropical Storm Ida has just formed and it takes some time for the models to handle the conditions properly. Nevertheless, the majority of the models are tracking Ida across the central portions of the Gulf.

So the potential impact of Ida, which is expected to intensify into a major hurricane before it nears the coast, could be from the western Lousiana coast to the Mississippi coast. Where and how intense the impact will be is still a bit uncertain. 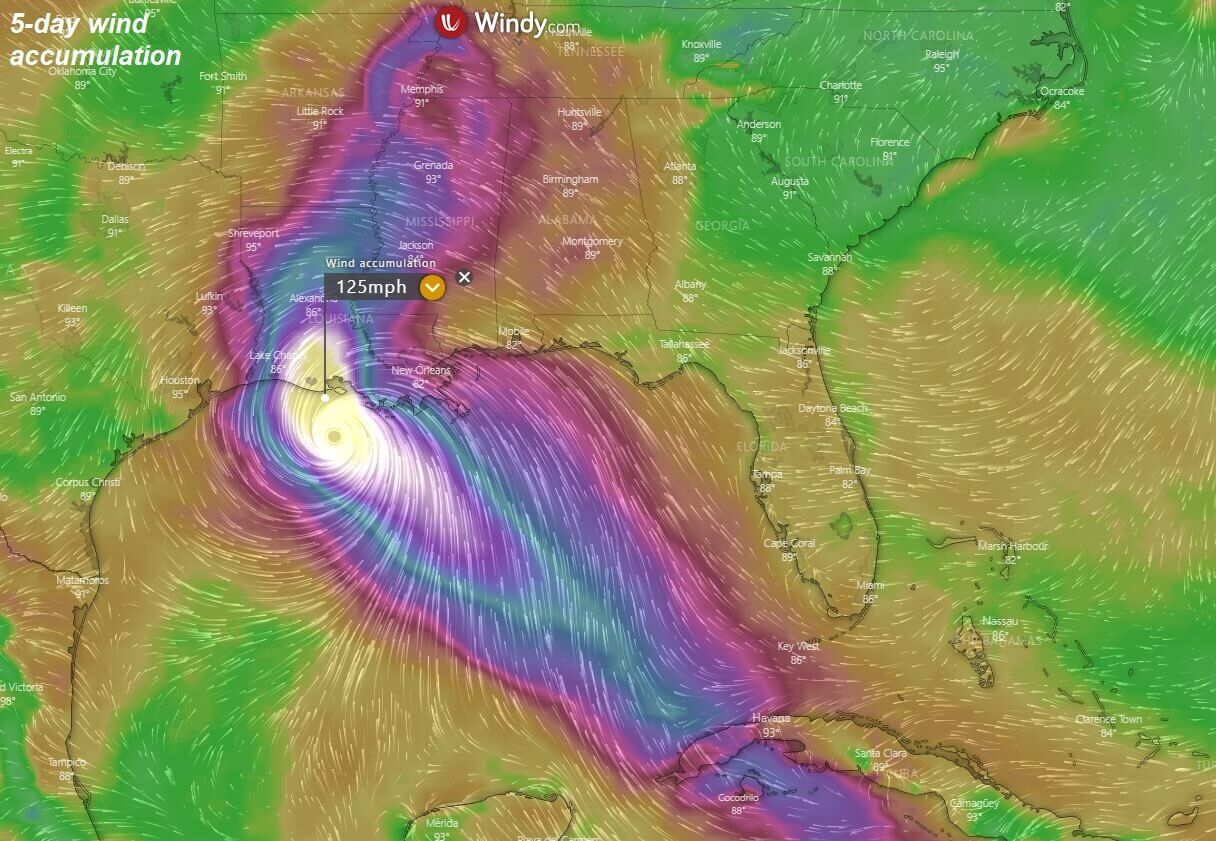 But the potential is increasing Ida will be a very dangerous hurricane once it arrives close to the Gulf Coast on Sunday. A life-threatening storm surge is likely to develop, thanks to powerful winds pushing seas into the coastal areas.

A Hurricane Watch is in effect for Cameron, Louisiana to the Mississippi/Alabama border and from Lake Pontchartrain, Lake Maurepas, and Metropolitan New Orleans.

A Storm Surge Watch is in effect for Sabine Pass to Alabama/Florida border and from Vermilion Bay, Lake Borgne, Lake Pontchartrain, Lake Maurepas, and Mobile Bay.

Up to near 25 inches (650 mm) is possible where the center of Ida will impact the central Gulf Coast. The attached chart above is indeed just one of the model solutions and the exact track of hurricane Ida will likely change. But the potential for extremely dangerous flooding potential is in place, so close monitoring of further evolution is needed.

A deep tropical wave is located about midway between the Cabo Verde Islands and the Lesser Antilles this Friday and is producing showers and thunderstorms. With favorable conditions in place across the MDR region, gradual development of this system is expected. A tropical storm is likely to form during the next couple of days.

The National Hurricane Center (NHC) gives a 70 percent chance that the system will become a tropical depression over the weekend and 80 % chance it becomes a named tropical storm within the next 5 days.

Another area of interest is an elongated area of low pressure located over the central Atlantic, about 600 miles east of Bermuda. The system is producing showers and thunderstorms while the environmental conditions are expected to be marginally conducive for development. However, a tropical depression could form over the weekend.

Then, the system is expected to drift eastward today and Saturday, then accelerate northeastward on Sunday toward the central-north Atlantic. The National Hurricane Center (NHC) gives a 50 percent chance that the system will become a tropical depression over the weekend and 60 percent chance it becomes a named tropical storm within the next 5 days.